Full disclosure: A review copy of Imhotep: The Duel was provided by KOSMOS.

We’ve got a few games coming down the pipe from KOSMOS; I’m very excited. Obviously, I’m most excited for more EXIT Games, but I don’t have those yet so I’m going to have to be patient. Currently, given that I’m writing about them on top of another game’s review, I’m doing a real bad job of being patient, but that’s just how things work in Busytown. In the meantime, I can tide myself over with Imhotep: The Duel! I was a bit concerned with how this one plays given that I already like (and am quite terrible at) Imhotep’s base game, but let’s dig in and see if those fears are justified (that’s an archaeology pun, for those of you at home).

Alright, in Imhotep: The Duel, none of you are Imhotep. To be fair, this shouldn’t be a particularly big surprise; none of you were Imhotep in the base game, either. Who you are are Nefertiti and Akhenaten, and you’re here to build the best … monuments, there it is. Obelisks, Pyramids, Tombs, and Temples; you’re going to need to build them all and build them all the best if you want to prove that you’re the greater leader. Which will triumph?

Setup isn’t too intense. Set the board out in the center: 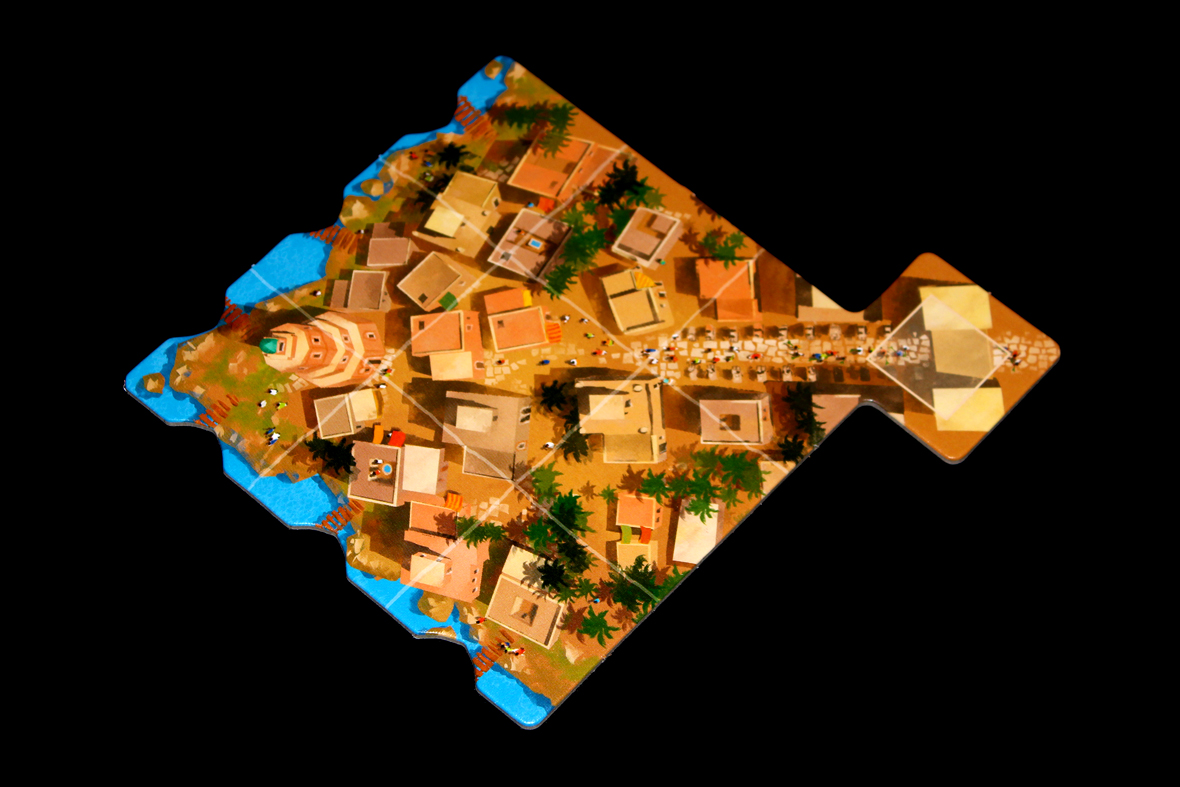 Set a boat in each of the available ports:

There should be six. Now, shuffle the tokens. Place three face-down in the reserve at the top of the board, and three on each boat:

Give each player a set of Location Tiles on either the A or B side. Make sure both players are using the same side for a game:

Once you get familiar with the game, try the B side; it’s fun:

Each player is going to get some of the player figures in either white or black, and you’re ready to start!

Alright, so this is a game of tile collection. Over the course of the game you’ll place figures, unload boats, take tiles, and score points. At the end of the game, the player with the most points wins!

A game is played over a series of turns. On a player’s turn, they may either Place a Figure, Unload a Boat, or Use a Blue Token. More on each below.

This one’s pretty simple; take one of your figures from the supply and place it on any of the nine spaces on the board, provided it’s unoccupied. That’s … pretty much your entire turn, if you choose to do that.

If a row or column has at least 2 figures in it, you may choose to unload that row or column’s boat. Starting with the figure closest to the boat, take the token furthest from the board (at the end of the boat) and give it to the player who owns that figure. Return the figure to that player’s supply, as well. If there are only two figures, the token at the front of the boat is removed from the game. Replace all three empty spaces with new tokens.

If there aren’t enough tokens left in the supply to refill the boat, refill it from the reserve on the board. Once that happens, if a boat needs to be refilled, remove it from play, instead. Once the fifth boat has been removed from play, the game ends.

Use a Blue Token

Blue Tokens are essentially super actions. They let you place extra figures, swap tokens around, place figures and unload, and more. That said, they come at a cost; if you use one of those, it takes up your entire turn.

When there is only one boat remaining (and five boats have been removed from play), the game immediately ends. Now, tally your points based on each location; the player with the most points wins! If it’s a tie, the player who didn’t start wins! 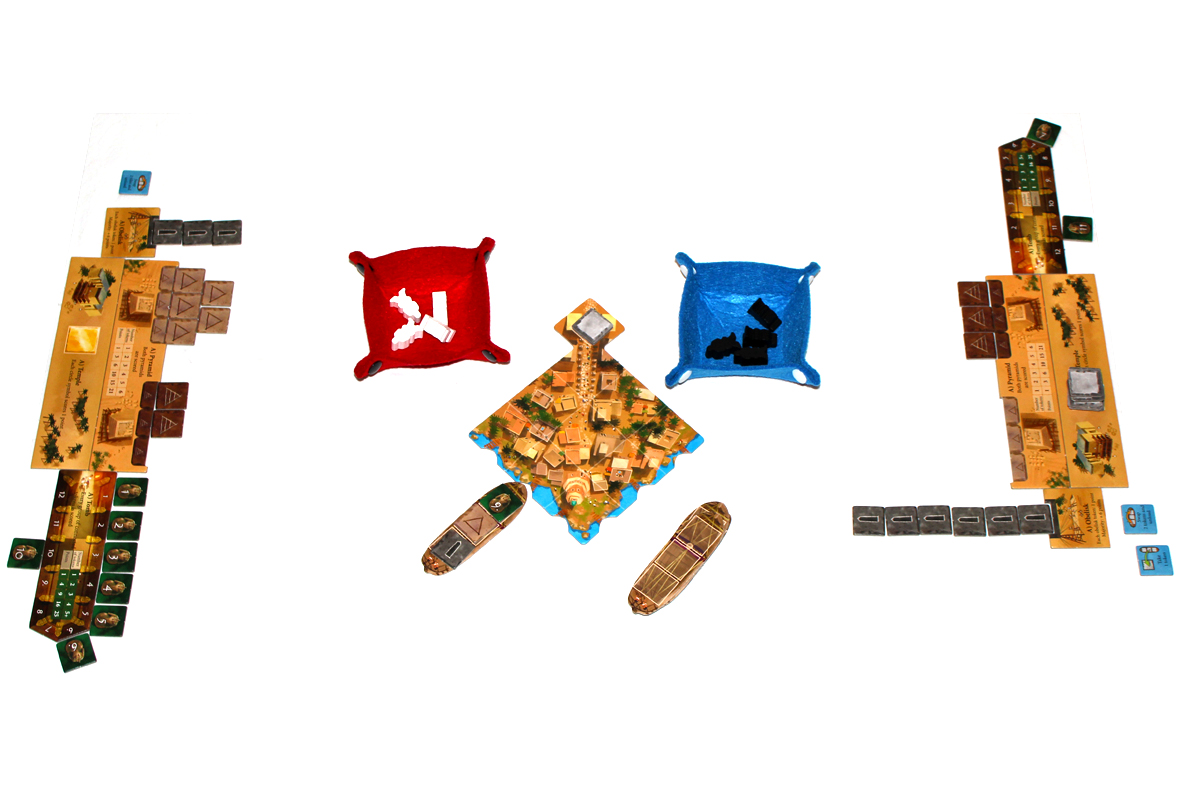 Overall, though, I think the portability and ease of setup win out for Imhotep: The Duel! I don’t have to deal with cards or blocks or all the complexities therein; I can just shuffle up the tokens, place them on the boats, and I’m good to go. That counts for a lot, even if the core game isn’t that much different. That said, I wasn’t sure where to say it in my review, but the actual process of picking and unloading boats is pretty interesting, since your figure can be used for a row or column; it means you need to be smart about looking at both possible placement opportunities. It’s a really clever design to increase the complexity of that decision without overcomplicating it. Naturally, in the wrong hands, everything can be overcomplicated, but within the scope of this game it flows very well, in my experience. I’ve played a lot of “Duel” games, and several of them work pretty well at encapsulating their original game without taking away from it, and I definitely think this one is a worthy addition to that category. I think it does a good job remembering what people like about Imhotep (the spiteful placement and punishment) and shrinks it down so that it’s easier for two people to pick up and play a quick game. I’ll be interested to see if they add complexity to it in an expansion, if they choose to go that route, but if you’re looking for a solid two-player title or you just enjoy Egypt-themed games, I’d certainly recommend Imhotep: The Duel! It’s been a lot of fun to play.