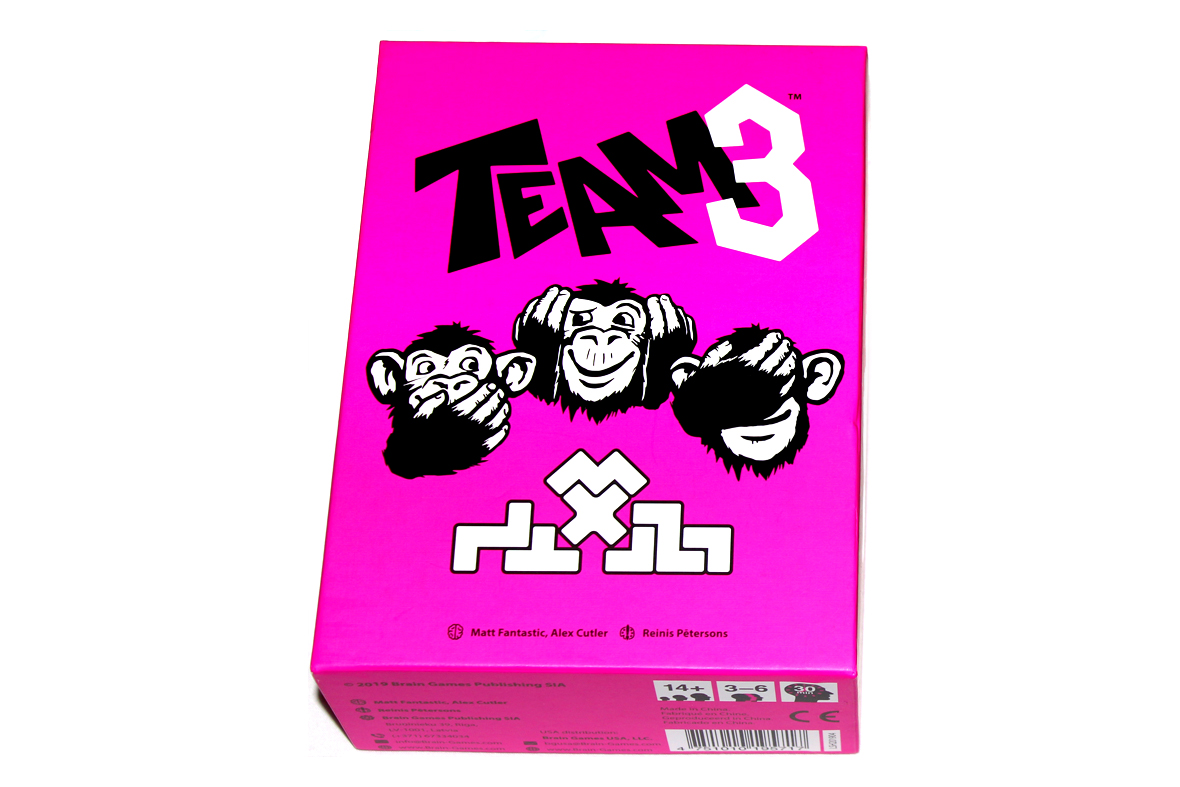 Full disclosure: A review copy of TEAM3 PINK was provided by Brain Games.

It’s deja vu, almost! I reviewed TEAM3 GREEN last week, so why not hit up TEAM3 PINK this week? Brain Games sent me a box of stuff (which means I have to review Snowman Dice before the winter, sadly) and I want to talk about it; I’m saving Pigasus for Halloween week because it’s basically a horror game if you stop to look at any of the cards for any length of time. So, the TEAM3 series is what we’re talking about now; let’s get to it!

In TEAM3 PINK, the same monkeys are back with a new construction company to replace the Green one that they had. Or maybe this is the first one? It depends on which game you bought first. And it’s not relevant. Anyways, you’re making all sorts of new mistakes with new cards, the same old blocks, and a new expansion that will really force you to reexamine your perspective. So good luck with that. Will you be able to build yourself up to success?

Setup is very similar (identical, even) to the Green version. Set out the pieces: 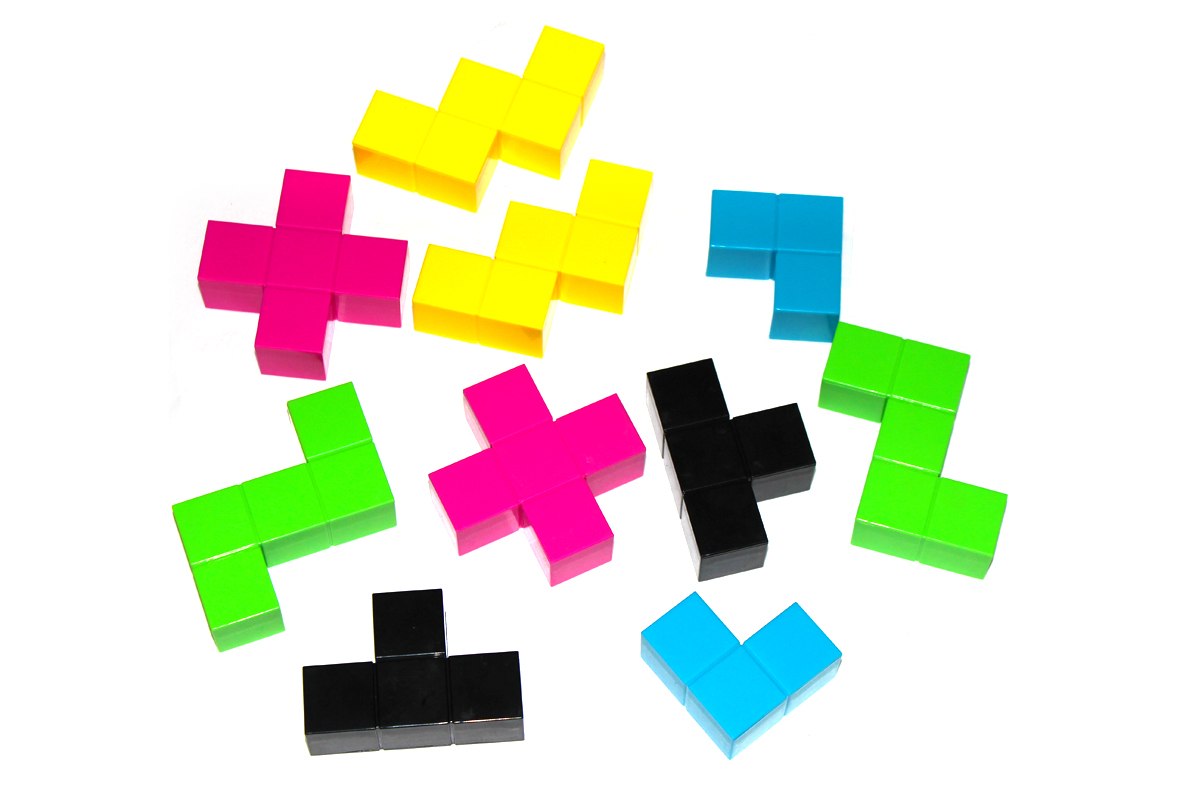 Give a role card to each player: 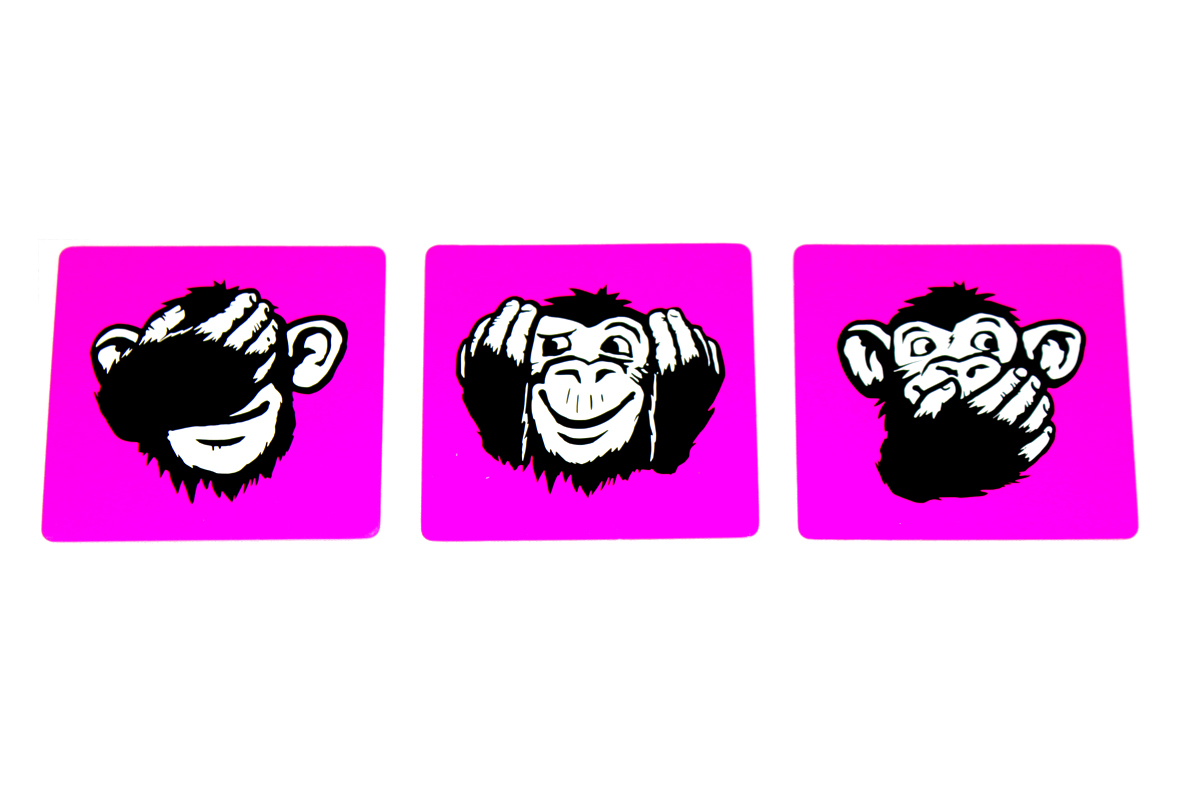 Again, as a quick reminder, from left to right, the roles are:

I’ll talk about them in Gameplay. Choose a difficulty level and shuffle up the cards for that level: 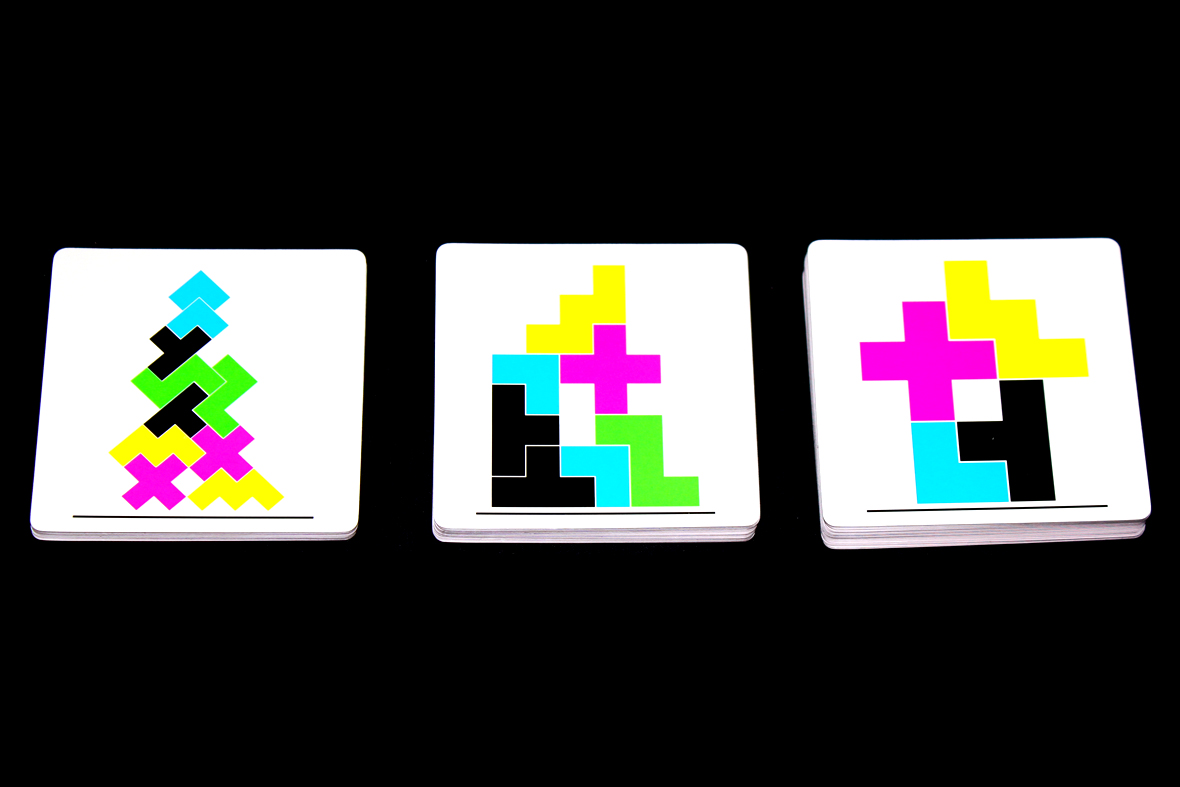 Note that these cards are different than the GREEN version. Pass the stack of cards you just shuffled to the Architect. Once you’ve done that, you’re basically ready to start! 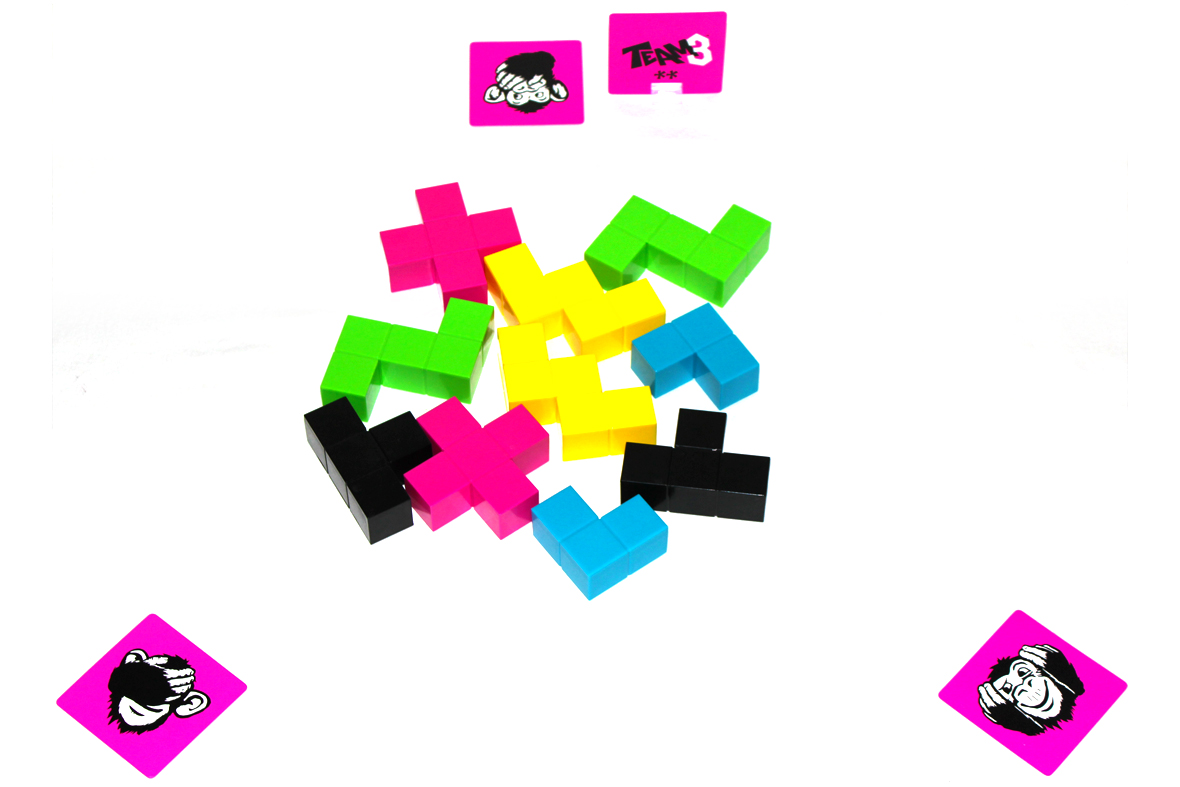 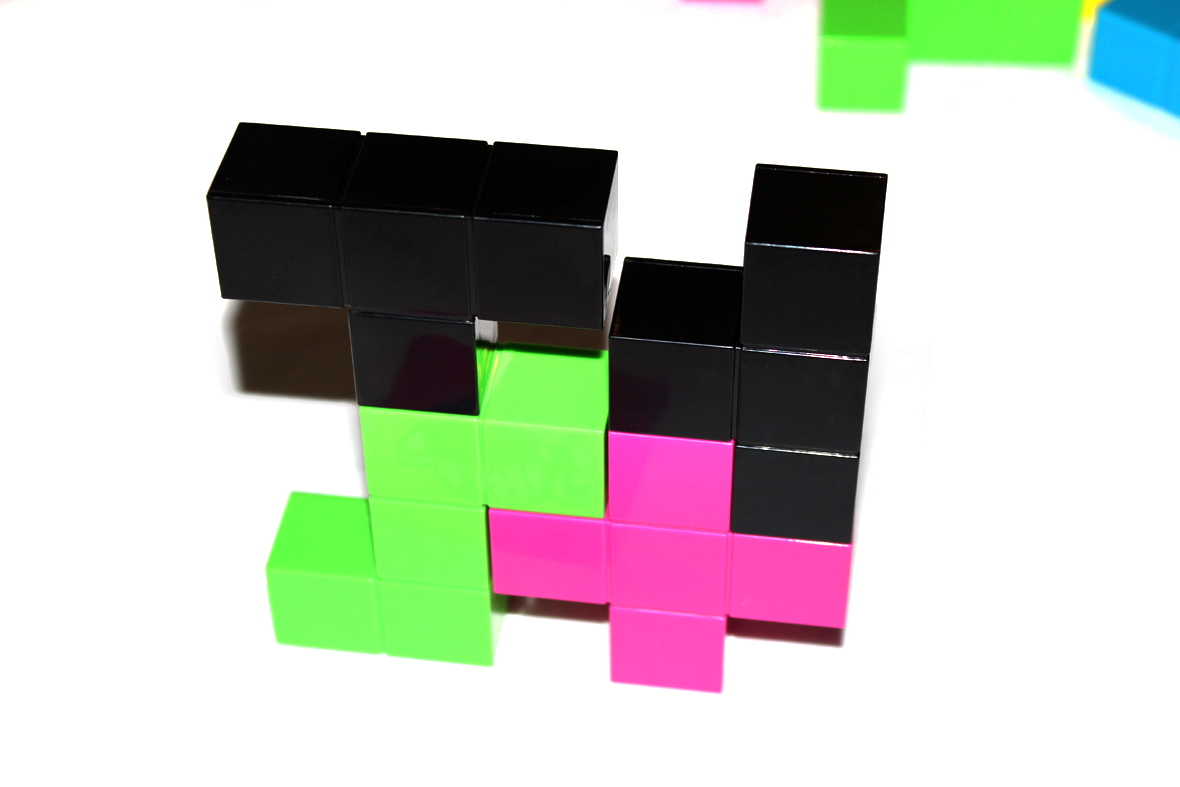 Like last week, a game of TEAM3 PINK requires you to build some structures. Similarly, the premise is easy but the execution is challenging. As with the previous game, each player has a unique “ability”:

It’s as challenging as it sounds. Set a three-minute timer. If you finish the structure, take the card and set it aside to count as a point; if not, set it aside as a failure. Pass all the roles to the left and start again! 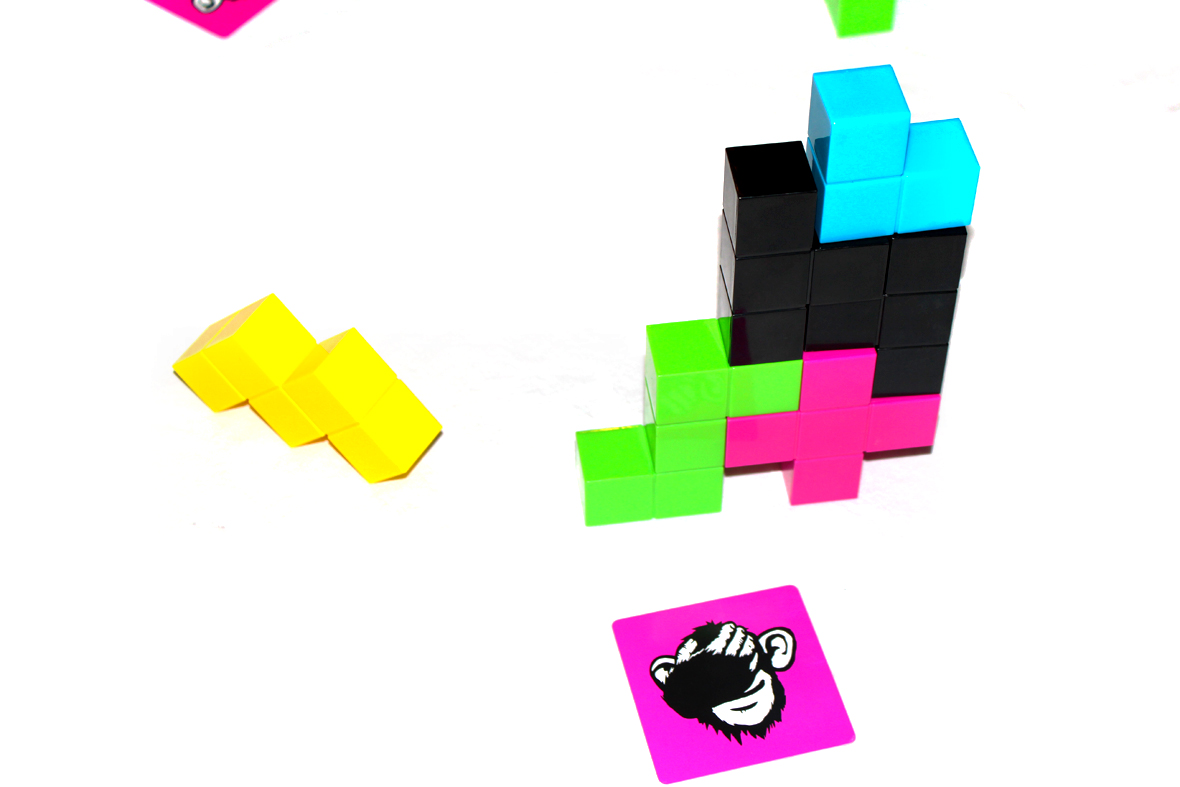 The game ends when you score the correct number of points (the number of stars on the deck + the number of players) or when you’ve failed as many Blueprints as players in the game.

Are you just bored of the TEAM3 Series? Can you beat Level 3 with both sets with your eyes closed? I mean, you’d probably have to be able to do that at some point given that you’ll eventually be the Builder, so I suppose that’s a bad example. Look, what I’m trying to ask is would you like to play a punishingly difficult game of TEAM3?

There’s no additional setup, just use one block of each color and the Dimension Tension cards: 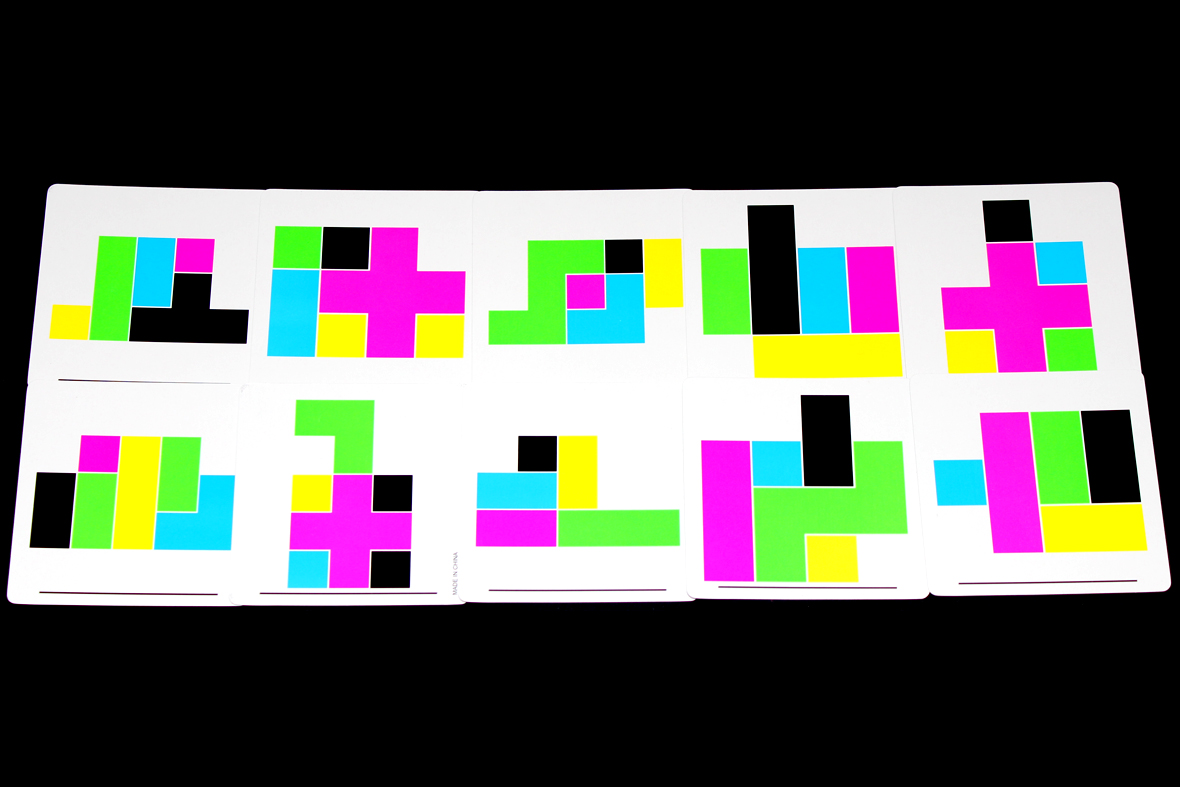 You might notice that they’re the wrong shape, but I’d argue that’s just a matter of perspective. Literally, in this case. Your goal is to build these structures such that they look like the picture when viewed from the correct side.

Good luck with that. I don’t think we even got one. It’s pretty brutal. On the plus side, you can use this variant in the TEAM3V3 mode quite easily. Complete a number of Blueprints equal to the number of players you have to win!

Just like the green version, you can also play competitively with 6+ players. Have each Architect use the same Level 1 Card, and whichever team completes it first gains a point! The first team to gain 6 points wins the game! You could even use the Dimension Tension cards if you just … hate your friends.

I know I have been bringing up TEAM3 GREEN a lot (and will continue to do so for the remainder of this review), but this one does have a key difference; unlike TEAM3 GREEN, it does not have a 5-player-specific option in its mini-expansion. That means that this one’s pretty solidly limited to 3 or 6 players, in my opinion, since any other options means you either have too few players or some players have to sit out and watch during rounds because you have too many players.

It’s worth noting that if you have both copies, you can combine them to play a 12-player game (competitively), but in the meantime I’d strongly encourage you to only play this with 3 or 6 players.

Honestly, it’s going to be the same stuff as TEAM3 GREEN, with some Dimension Tension-specific stuff.

Again, pretty similar to last week’s. I do have some new stuff to say about it, though. 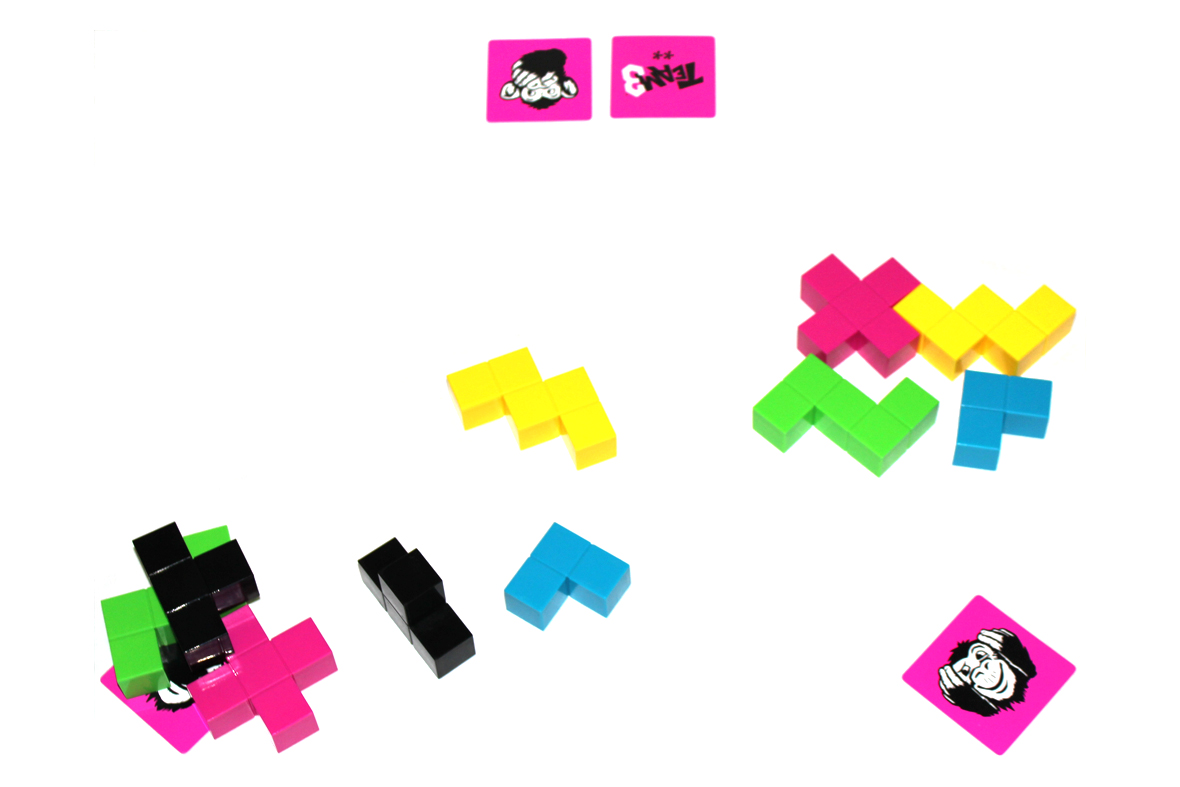 Overall, yeah, I mean, I really enjoy the TEAM3 series, so that’s not much of a surprise. I will say that I like PINK slightly less than GREEN, mostly because I prefer Mind Merge to Dimension Tension (it’s easier, in my opinion), and Mind Merge gives players the option to have a specifically 5-player experience, something PINK lacks. Both games are basically 3-player games, but PINK is pretty much only 3 and 6, again unless you have players that enjoy sitting out for an entire round while other players build (and you might! It’s stressful). That said, as an expansion, it’s also pretty solid; it adds an entire new set of cards (and a new Mini-Expansion that is, as I’ve already mentioned, very challenging), and gives you an extra set of blocks so that you can play with 12 people! That’s great. I think it might have been worth pitching it as an expansion, but also, I’m not a marketer, so who cares what I think. If you want to start with a harder version or you can’t get enough of TEAM3, TEAM3 PINK might be worth looking into! It’s quite a challenge.