Full disclosure: A review copy of Bermuda Pirates was provided by FoxMind.

Alright, here we go again with another review! This time it’s Bermuda Pirates, from FoxMind. Lots of fun stuff from FoxMind in the past, like Manhattan and The Potion, which recently got a cooperative mini-expansion that I still want to try. I’m also checking out Match Madness from them, soon, but Bermuda Pirates was a bit more top-of-mind, so I wanted to make sure I got to that one. So let’s dive right into it and see what’s going on there!

In Bermuda Pirates, you and your crew have made a name for yourselves in the dreaded Bermuda Triangle. Unfortunately, you assumed that was all superstition, only to find out that weird things happen in this part of the ocean. Whirlpools have appeared and threaten to cut you off from a massive treasure, so you resolve to get there and get it out while you still can. Of course, you’re not the only pirate who’s got their sights set on that haul…

Not much to do, here. Put the deep-sea boards down, first:

Then, set the full board on top of them, using the blue plastic centerpiece to keep everything aligned:

Add the flags on top of that:

And then put the crystals in the center, separated by color: 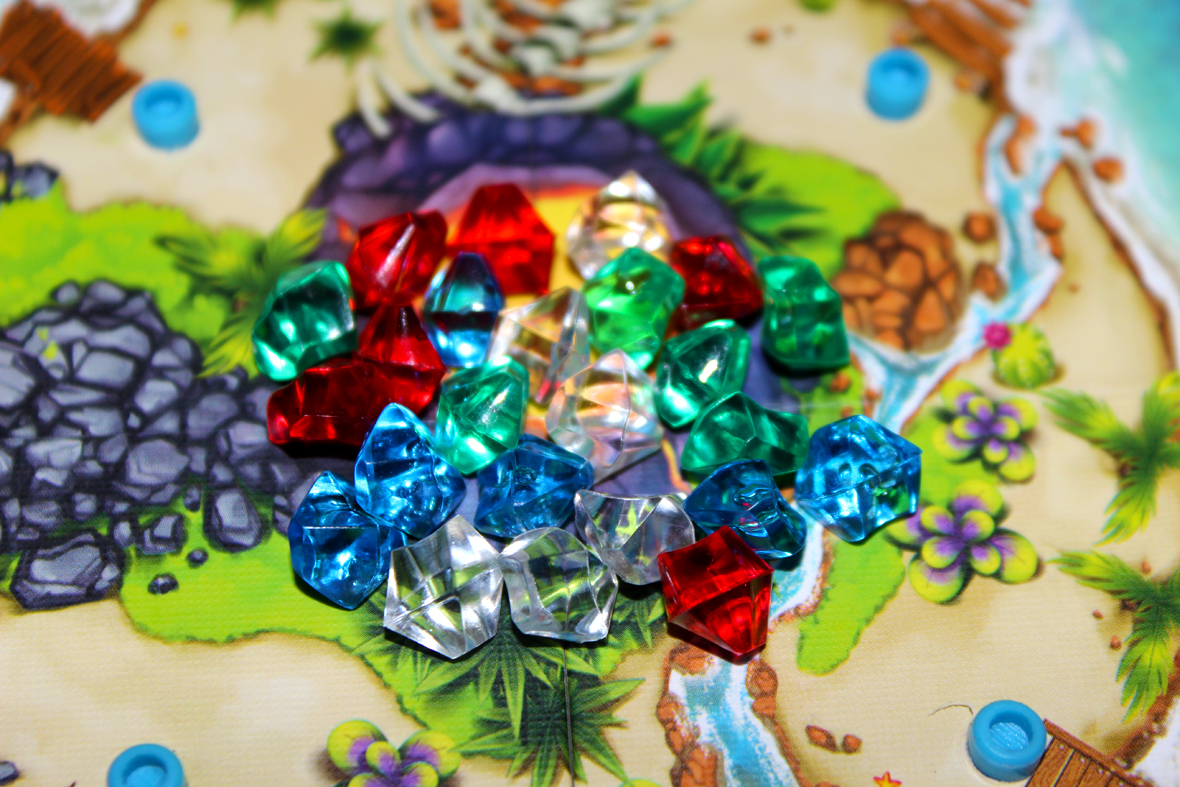 Give each player a boat matching the color of their corner of the board: 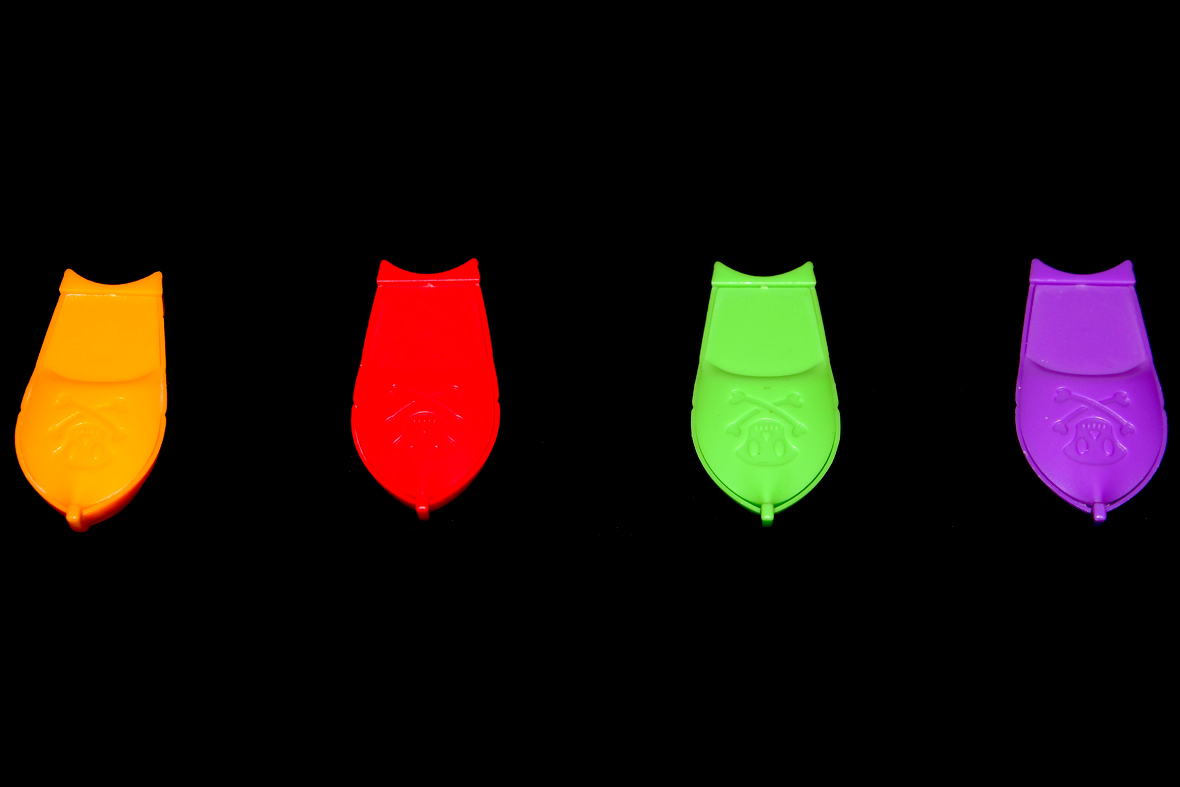 For younger / less experienced players, you may also want to give them one or more buoys:

A game of Bermuda Pirates is simple in theory: you want to get the treasure and take it back to your dock. The problem is that nothing’s ever so simple when you’re in the Bermuda Triangle! There’s some strange movement in the currents and you suspect a whirlpool could appear out of nowhere to capsize you! You’ll have to be clever if you want to make it out a rich pirate.

On your turn, push your boat towards the center with one finger (similar to Snowman Dice, reviewing later this year). If you make it to the center without incident and your boat touches a flag, you may take the corresponding crystal and add it to your boat. You may continue around the island, hitting docks to add to your boat, but be careful! Crystals that get knocked off during loading are lost to the sea unless you can pick them back up.

Then, push your boat back to your home dock to claim the treasures. Seems easy, right? Oh, did I not mention the whirlpools? 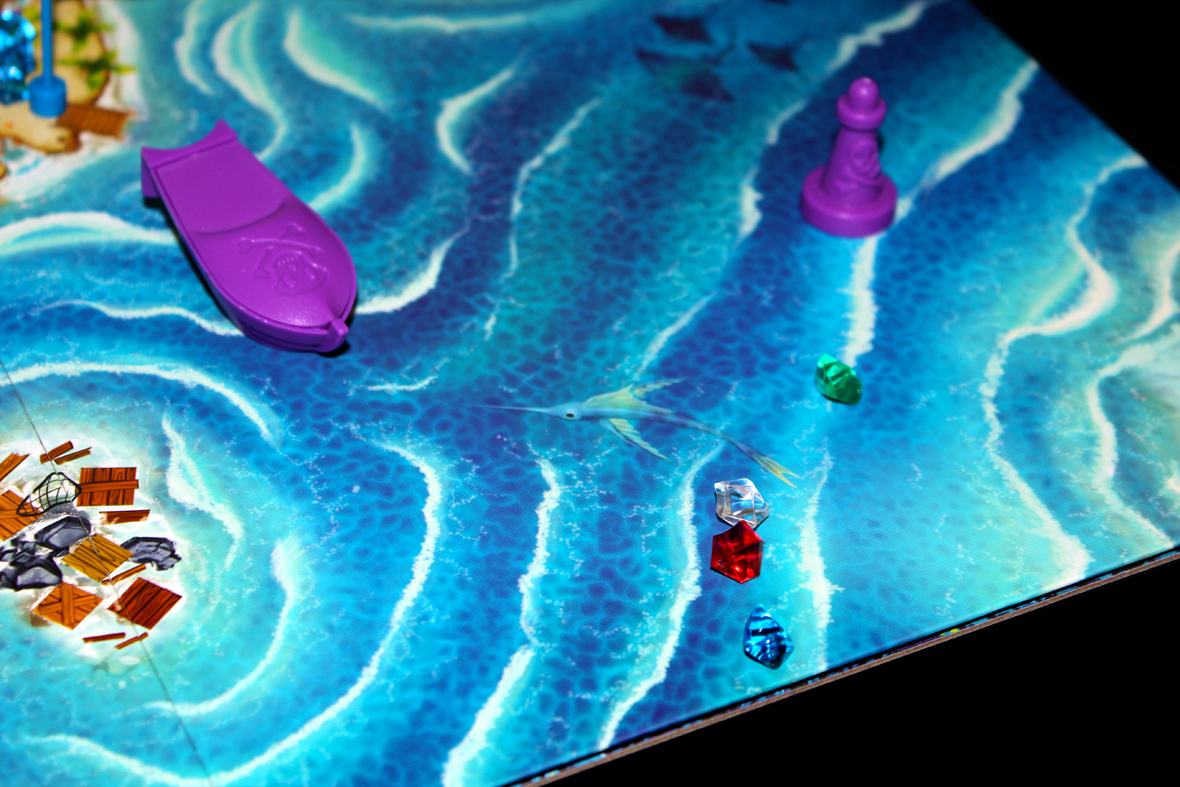 Should you get unlucky, you might hit a whirlpool! That’s a solid metal disk under the board that attracts your ship’s magnetic bow. If you get caught in one, you might launch your treasure into the sea! Either way, leave the treasures you claimed behind (if any) and end your turn. The next player gets to go. If you have any buoys, you can place one on the whirlpool to warn yourself (and others) of the potential fate that may befall the unwary.

If you’re looking to get a bit more aggressive, there’s always the Plunder variant! In this one, not only can you get more than one set of treasures, but you can also steal from other players!

Now, players remove their boats after their turn, and you can go to their dock and take up to two treasures of different colors.

A full set of Treasures (one of each color) is now worth 6 points, and they’re removed from your dock once you have them (and can’t be stolen). Once a player has 8 points, finish the round and the player with the most points wins!

Not really many in the base game, since you’re kind of playing solo against the board itself. In Plunder, you kind of become more incentivized to take sets over singles, otherwise if you hit 8 players can pick you apart (since likely other players will get extra turns before the game ends). That pile-on is usually pretty unlikely, given that players will usually crash before they make it back to their dock, but they may still make off with your points, which could be a bummer. Either way, I don’t see many differences with player count beyond adding additional downtime when it’s not your turn, and even then turns are relatively short so it’s not that big of a deal. No particular player count preference.

Overall, though, I think Bermuda Pirates is a lot of fun! Easily a very solid game for younger players, and it’s still interesting enough to keep older players engaged, which I really appreciate. At its core, it’s a silly game, sure, but I think the actual mechanical design of the game is particularly smart. Embedding metal disks in cardboard to catch magnetic boats is pretty cool, and it means that the game looks and feels very standard cardboard but then expands outward into this neat little feat of mechanical engineering. Personally, I think it’s easily as novel as other games I’ve seen earn a lot of praise in the space, like ICECOOL (though I’ll definitely concede that I prefer ICECOOL without much contest; I love penguins and I think the dexterity is a bit more interesting, albeit skill-based). That said, I’d definitely get this for a few of my friends who have some younger gamers and are looking to get them excited about games! I might recommend it for a bit older than the early HABA crowd (those crystals are pretty tiny), but I still think it’s a solid title. If you’re looking for something to play with a younger player or you just like quick and simple dexterity games, check out Bermuda Pirates! Especially if you can hit the whirlpool perfectly.