Sometimes I go a bit off-book and review games that I bought myself, but holy heck does it take a while. I think I picked this game up in 2018? And it’s almost 2020 now? Yikes. This is the plight of just trying to buy games and manage a review calendar, I guess??? Regardless, I try to get around to things, especially if they’re thematically or seasonally appropriate, like they are now. And as we move into the Fall (I write this in July, so, whatever), we can start getting hyped for Halloween, a fantastic holiday. No better way to celebrate than with SPOOKY GAMES!

In Sweets Stack, you play as children convinced to play a game by a malicious spirit. In doing so, you’re trying to “helpfully” offer each other candy for their candy baskets (as you do on Halloween). Unfortunately, all the candy is weirdly shaped, and if you cause someone’s basket to overflow, they lose! Win, and you’ll get a candle that, and I’m just reading the rulebook, here, lets you become friends with a ghost. So that’s cool. Will you be able to trick your opponents into accepting too many treats? Or do you not stand a ghost of a chance?

Not a ton of setup, honestly. Give every player three play sheets:

Have them put a 1 / 2 / 3 in the top-left corner (you’ll be playing three rounds). Shuffle the Candy Cards:

Give each player 16. Set out the Round Cards:

If you’d like, you can play with the Advanced Rules Cards; if so, shuffle them and place one under Round 2 and Round 3: 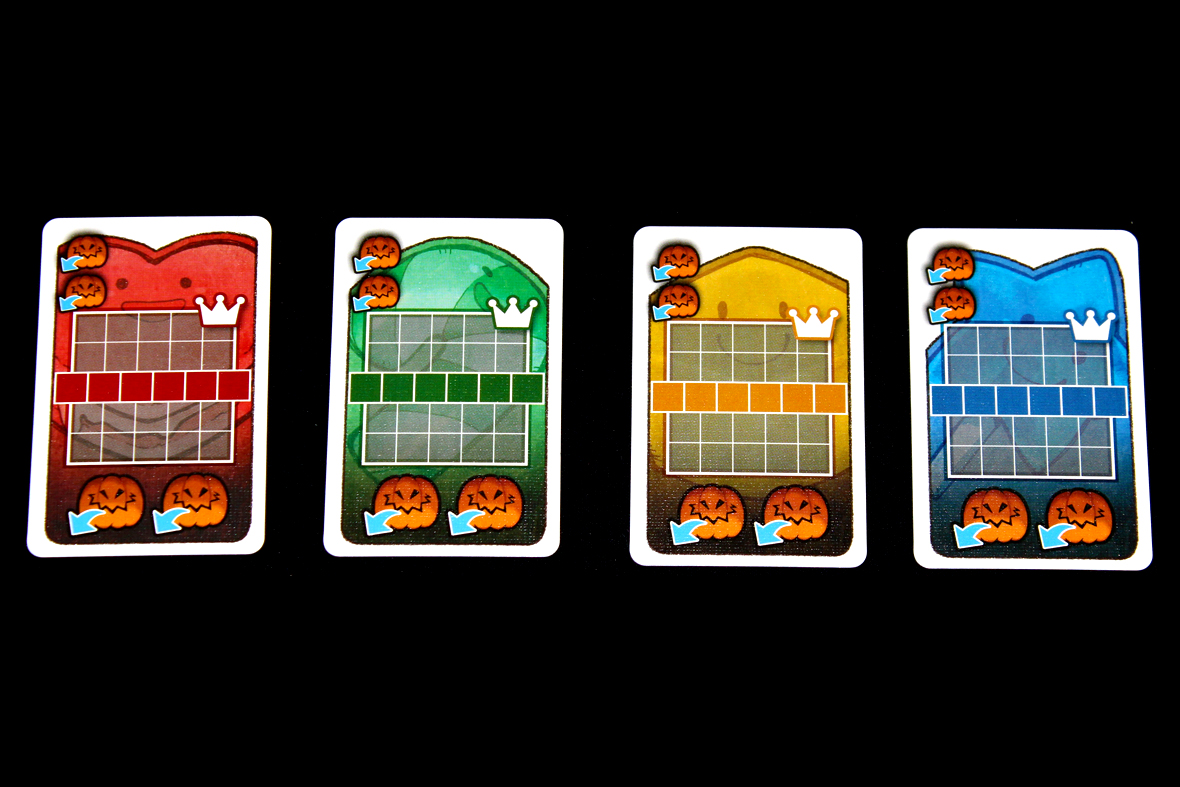 Set aside the Pumpkin and Candle tokens: 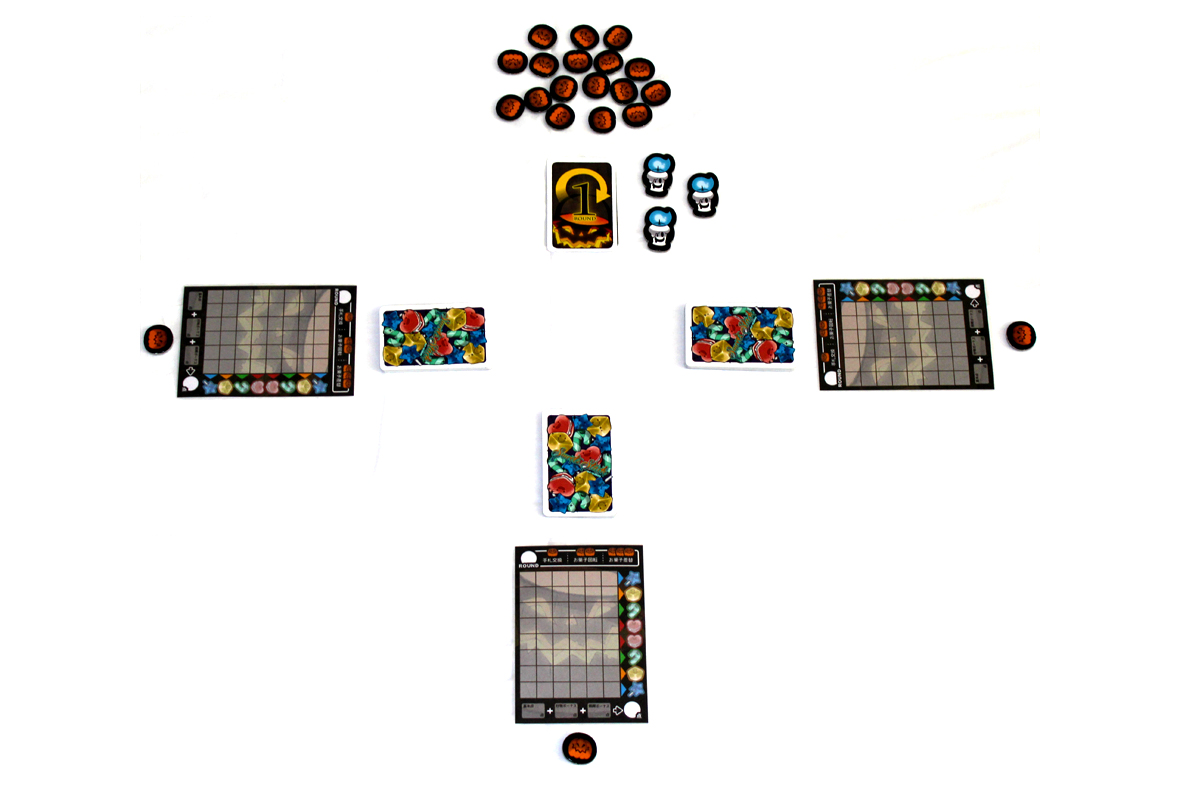 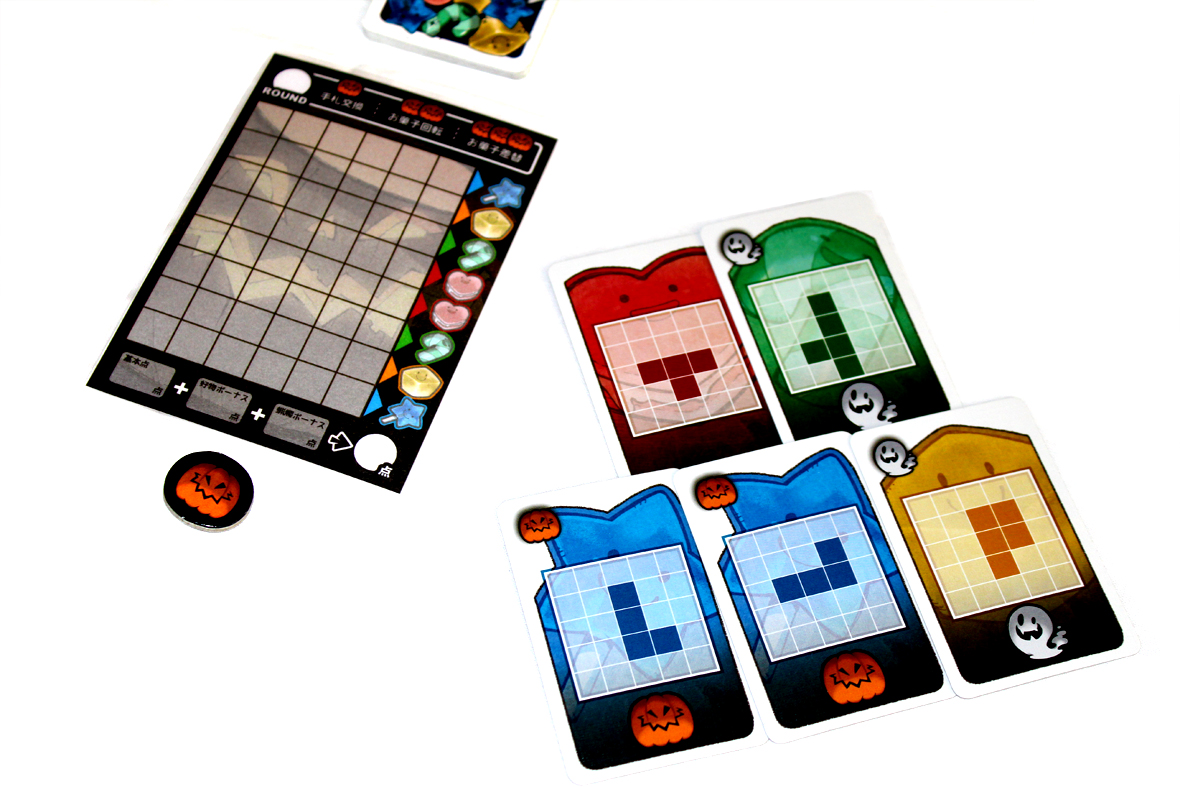 So, like I said, Sweets Stack is played over 3 rounds. In each, you seek to pseudo-draft some cards and pass them to your opponents to add the pieces on the cards to their boards. If their board fills up, you eliminate them! A round ends when players are eliminated and you score your board. After three rounds, the player with the highest score wins the game!

To begin a round, everyone takes the cards in front of them, in their hand, and in their deck, and shuffles them up. Draw five of them.

Now, every player gets 2 Pumpkin Tokens. 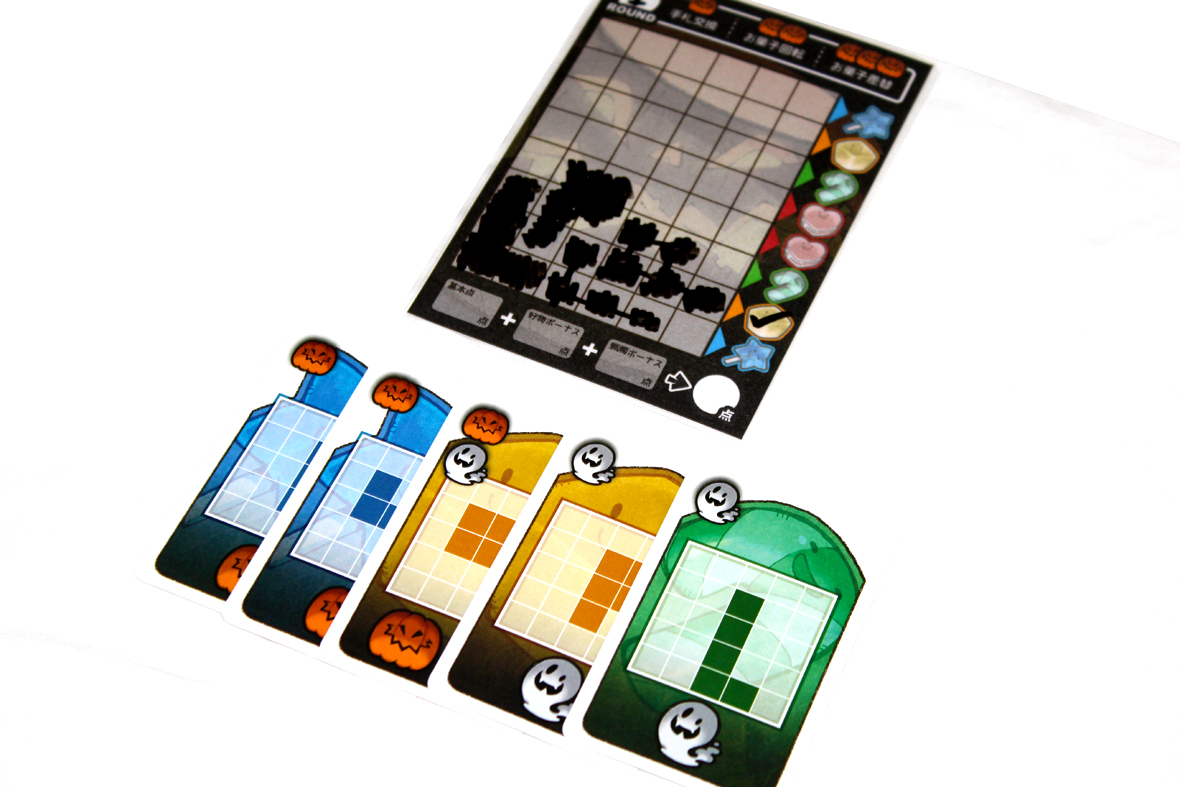 All turns are taken simultaneously. Players select a card from their hands and play it face-up. Once they do, if the card has a Pumpkin symbol (without an arrow), they collect a Pumpkin Token. Then, players pass the card in the direction indicated by the current Round Card. The player who receives the card must add that shape, as pictured, to their board, Tetris-style. There are some fixes that you can make, if you have enough Pumpkin Tokens:

When a shape is added to your board, it falls from the top (but can be moved, even when it hits the bottom). That said, it cannot fit through a hole smaller than it is.

If you successfully play the card you were given, you’re safe, for now. If it had a Pumpkin Token with an arrow on it, you take a Pumpkin Token. If you completed a horizontal row, check off the candy on the right side of the board corresponding to that row; that’s called a Favorite Candy Bonus and it will give you points later.

Either way, refill your hand to 3 cards if you have fewer than 3 cards in hand.

Once one or fewer players remain, the round ends. Your score is calculated as follows:

Total your scores for the round, and then start preparing for the next round! Discard all Tokens (Pumpkin and Candle) to the center.

After three rounds, the player with the most points wins!

The majority of the time, there are none; players are going to be hitting each other with the worst pieces in the cosmos regardless of player count. The key difference emerges at two players, in which you proceed to eviscerate your opponent (and likewise) in probably one of the most brutal two-player experiences I’ve seen. It’s fast, at least, but it is definitely unpleasant. Not that the game isn’t fun; it’s just very mean. You should be aware of that, but I’ll probably keep playing it at three or four players just to avoid how intense the two-player game is.

Overall, I keep coming back to Sweets Stack, and I think that’s because I like it quite a bit! Don’t get me wrong, it’s an excellent Halloween game (so much so that I pushed this review back to make sure it went live in October despite owning this game for over a year), but it’s also a solid contender in the flip-and-fill space. My main concern is that it’s much more aggressively mean than other games I’ve played in the space, which might be a lot for new players. New players playing against experienced players might not be the funnest scenario, but I would definitely recommend giving a group of new players this game and watching them go at it; that sounds hilarious. In a cruel way, of course, but, I mean, what can you do? To me, this game mostly appeals to that spatial-focused part of my brain that really likes games like Tag City, Roam, Tiny Towns, and the like. It’s not that I feel like this game is any worse than those games, but I do need a longer break between games of this than the other games to sorta purge out the malicious vibes you gotta internalize to do well. Either way, if you’re asking for a more interactive flip-and-fill, you’ll get exactly what you asked for with this game. Can’t say that doesn’t intrigue me a bit, though, so if you’re looking to get dangerous in the flip-and-fill space, I’d recommend Sweets Stack!