Full disclosure: A review copy of Wobble King was provided by HABA.

Alright, we’ve got a new age coming up; an age of HABA! I got a bunch of these games at Gen Con and have only recently had enough time to give them the attention that they deserve, so I’m going to spend the next indeterminate period of time going through the games I was given and reviewing them all. It helps that it’s right before the holidays, since HABA is usually a company that I look to for great gifts for the family. They’re also pushing a line of Game Night Approved games that are for a bit more advanced players, so, trying new things is always a good idea. Personally, I find Rhino Hero: Super Battle fun at any age group, but you know, some people only like to buy Serious Games for Serious Boys. That’s them. Let’s launch right into Wobble King and see what’s going on there.

In Wobble King, King Leo sleeps on his bed of treasure, as he does. You seek to liberate some of that treasure to either help the less fortunate or line your own pockets; I’m not given your backstory. The problem is, he’s literally sleeping on it, so it’s going to be hard to get the treasure without him noticing. Hard, but not impossible. You will need to be swift and cunning if you want to pull it off, because who knows what the guards will do to you if they wake you up? I do. They’ll throw rotten tomatoes at you. That’s just how this kingdom does. Will you be able to sneak away with treasure without waking up the king?

Not much setup to do. Take the nuggets and the stick: 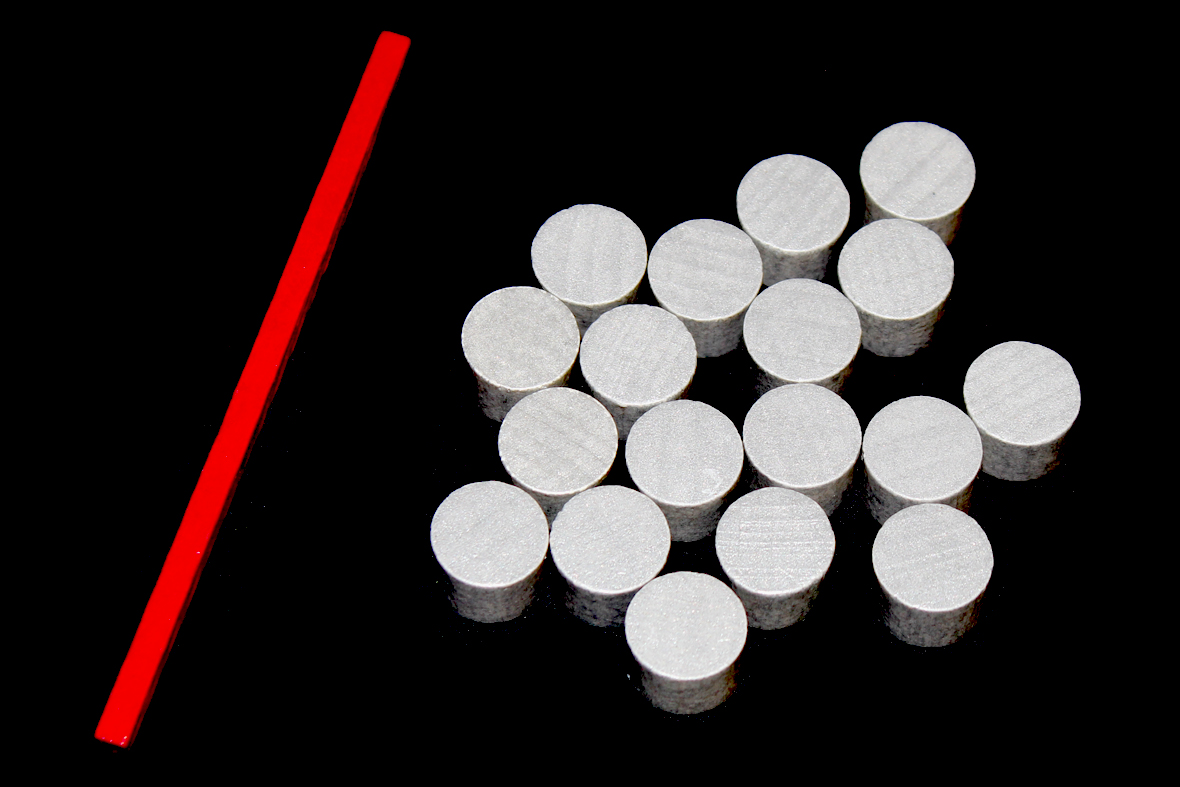 Mix the nuggets up and spread them around such that the board can fit on top of them without any hanging out visibly from below the board:

Place King Leo on the center of the board:

Set aside the Rotten Tomato chips; you hopefully won’t be getting any of these: 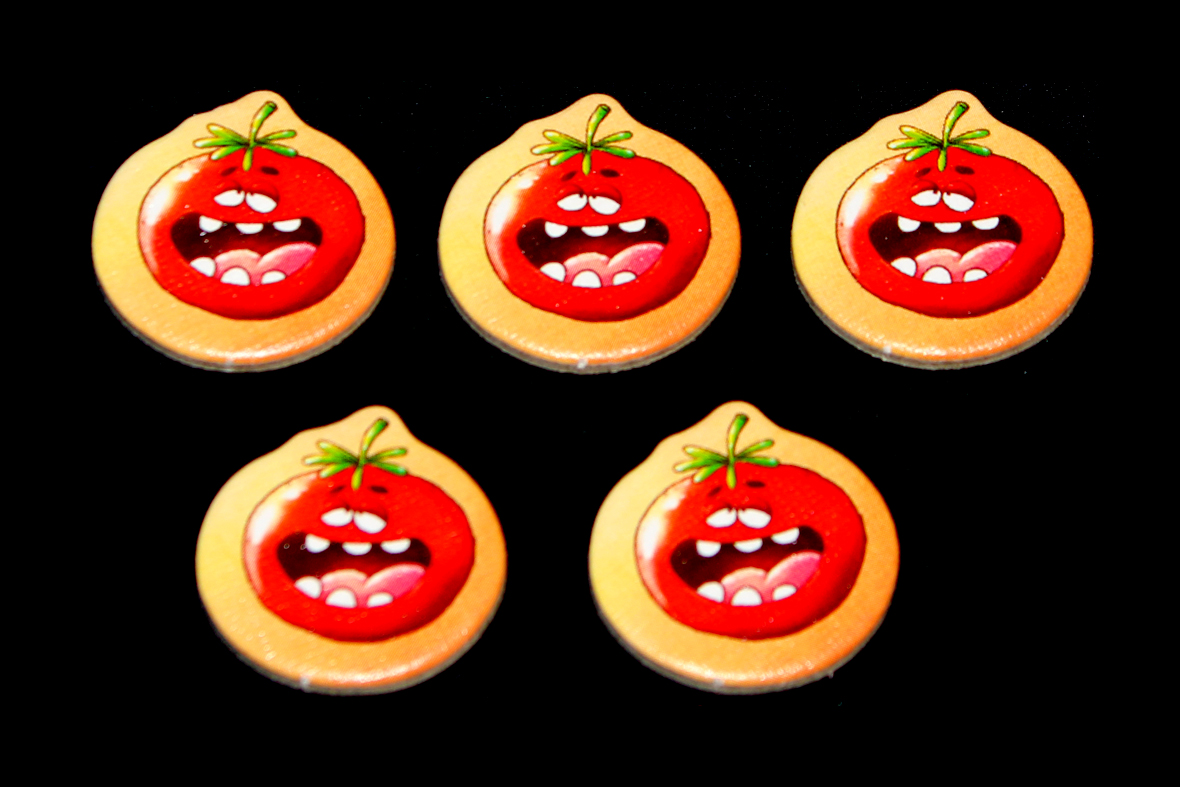 In Wobble King, as mentioned elsewhere, you are trying to steal the treasure of King Leo literally out from under him while he sleeps. Thankfully, the wooden stick here is going to be your friend. On your turn, swipe underneath of the board without looking under it to knock some of the silver nuggets out. There is no limit to the number of nuggets you can get on your turn, but you can only retrieve them once. Watch out for load-bearing treasure! 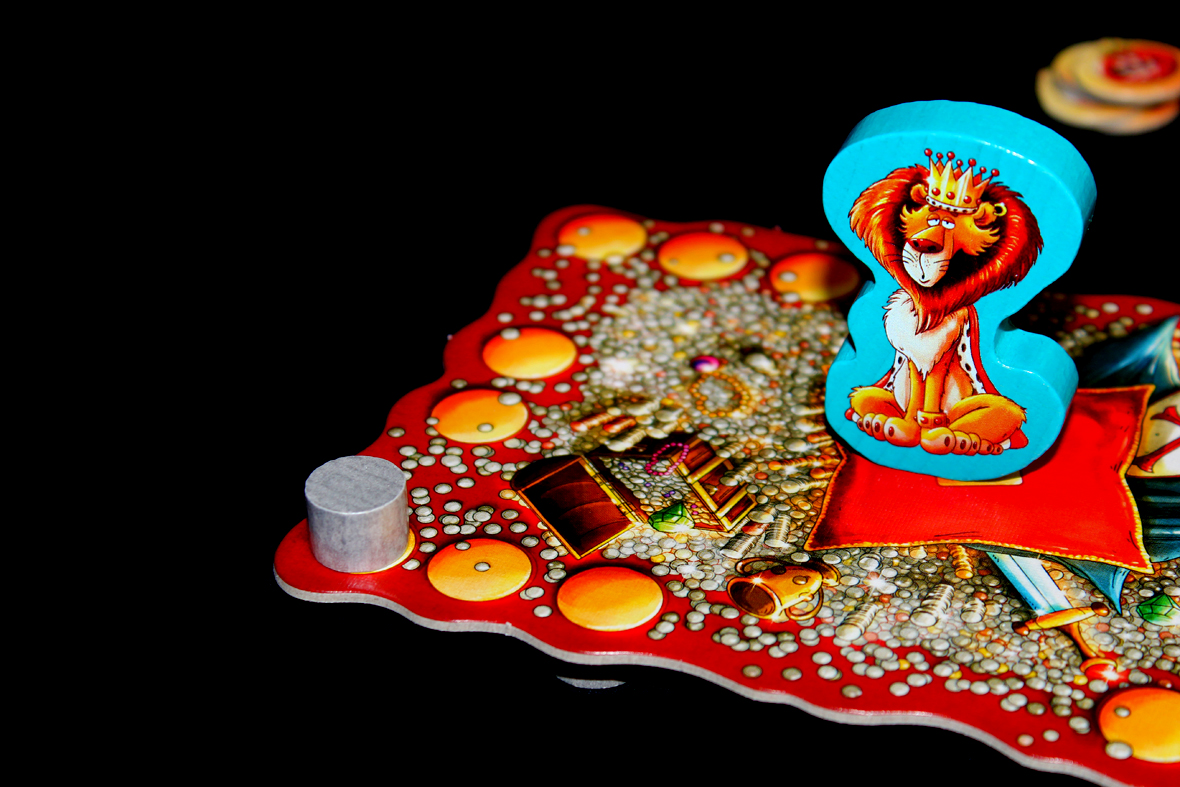 If you do so successfully without tipping the board or King Leo, take those nuggets and place one each on any empty space on the board of your choice. Pass the wooden stick to the next player; they’ll start their turn and do the same thing. 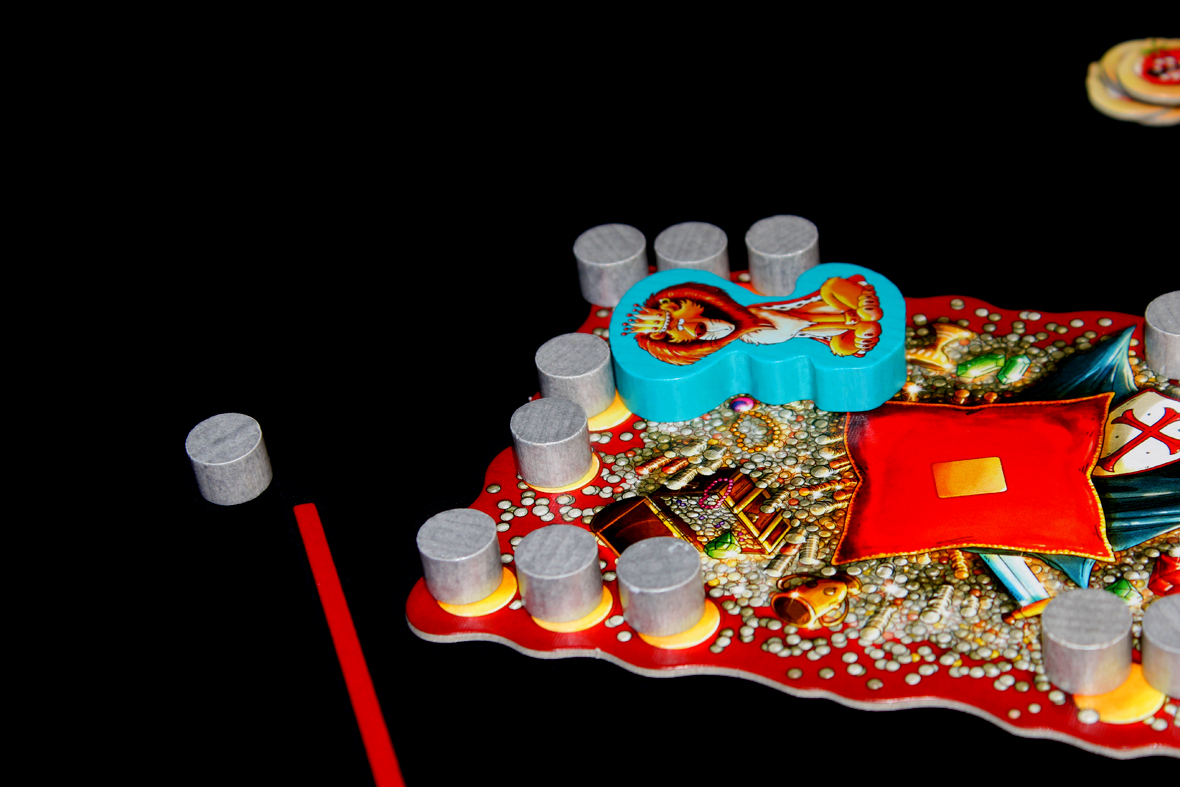 If you do tip the board or King Leo, his guards are alerted and throw a rotten tomato at you! Take one of the rotten tomato tokens. 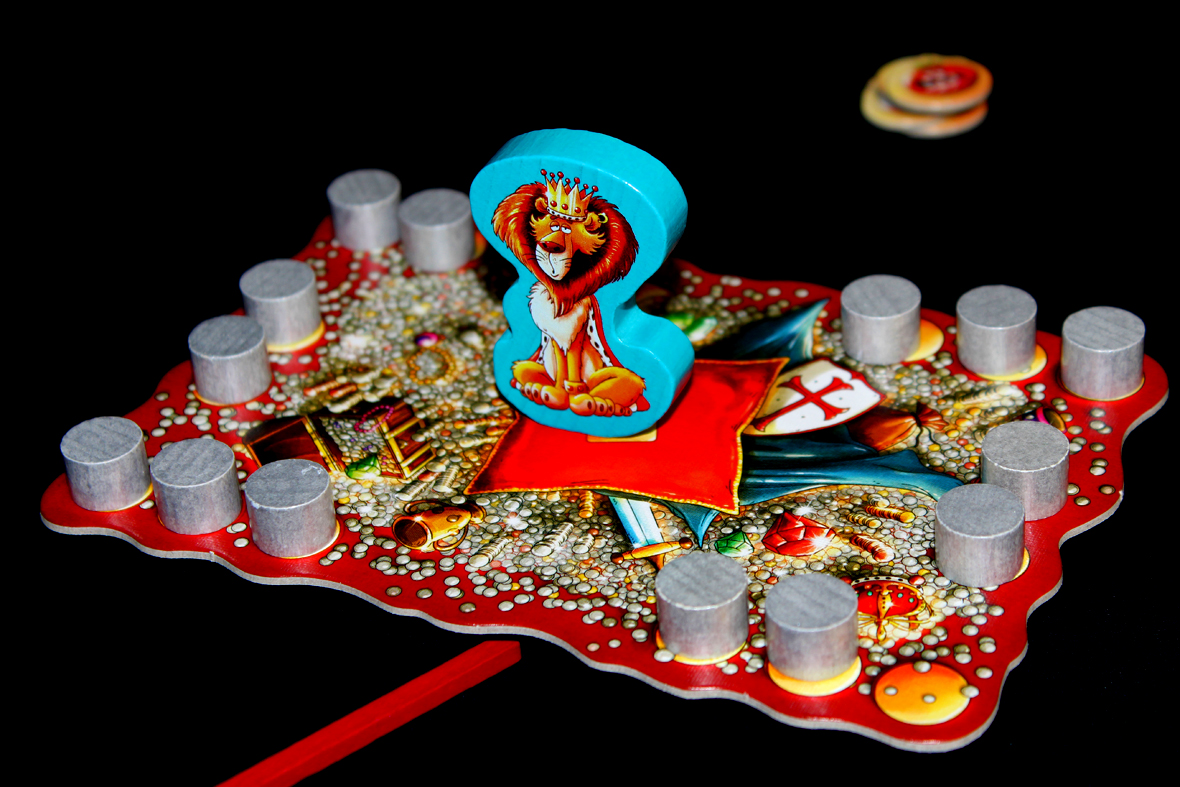 If all the spaces on the board are filled, King Leo has been robbed without even noticing! You make off with the treasure. Reset the board and try again; nobody gains any rotten tomatoes this round.

If any player gains a second rotten tomato, they immediately lose! All other players win the game!

There aren’t many, to be honest. I think at higher player counts there’s more of an incentive to make risky moves, since it comes back around to your turn much less frequently, so you can leave your opponents in a bind without getting totally messed up. At two, though, if you make a risky move, your opponent only has to extract one nugget to make it your turn again. That’s actually pretty not-hard to do. In general, I find that to be true of dexterity games like this; it’s rare for risky moves to be inadvisable at higher player counts (if you can pull them off) because the likelihood of another player getting punished for your insolence is reasonably high. Wobble King maintains that idea in its gameplay, and so I think it’s easier to pull that sort of thing off with four players. That said, if you want a very heady dexterity game, figuring out a way to play it with two would definitely be that due to the decreased downtime between your turns. I think I prefer it at higher player counts?

Overall, I think Wobble King is fine. On one hand, I really want to like it. I love most dexterity games, and the act of swiping underneath of a board to grab potentially load-bearing items is a lot of fun. The problem is that players will often feel around to see which ones are bearing the weight and not go after those, so we’ve had to make a sorta fast-swipe rule where you need to move quickly. Even when that happens, though, it’s pretty easy to keep the king balanced when there are only three nuggets underneath, so it ends up feeling vaguely pointless since the game doesn’t end if you successfully fill the board; it just starts another round. We tried to fix this by removing one nugget from the game so that there would only be two nuggets (making the king’s long-term stability much more questionable), but then it just highlights how much of the game is Nim-esque. It’s not about taking any of the earlier pieces; it’s about taking the last viable piece and forcing your opponent to lose. It’s cute, yes, but I wouldn’t go so far as to say there’s much past that, here, for me. I’d love to see a variant where the nuggets all have different densities, or one where you can stack more nuggets on one side to try and counterbalance the weight, or something that feels a bit more dynamic (different boards? An underboard?). Something like that could really elevate this game. For now, though, it’s just fine for me, and if you really need a quick dexterity fix (or you’re playing with younger and / or significantly less coordinated players), you possibly could enjoy it too?