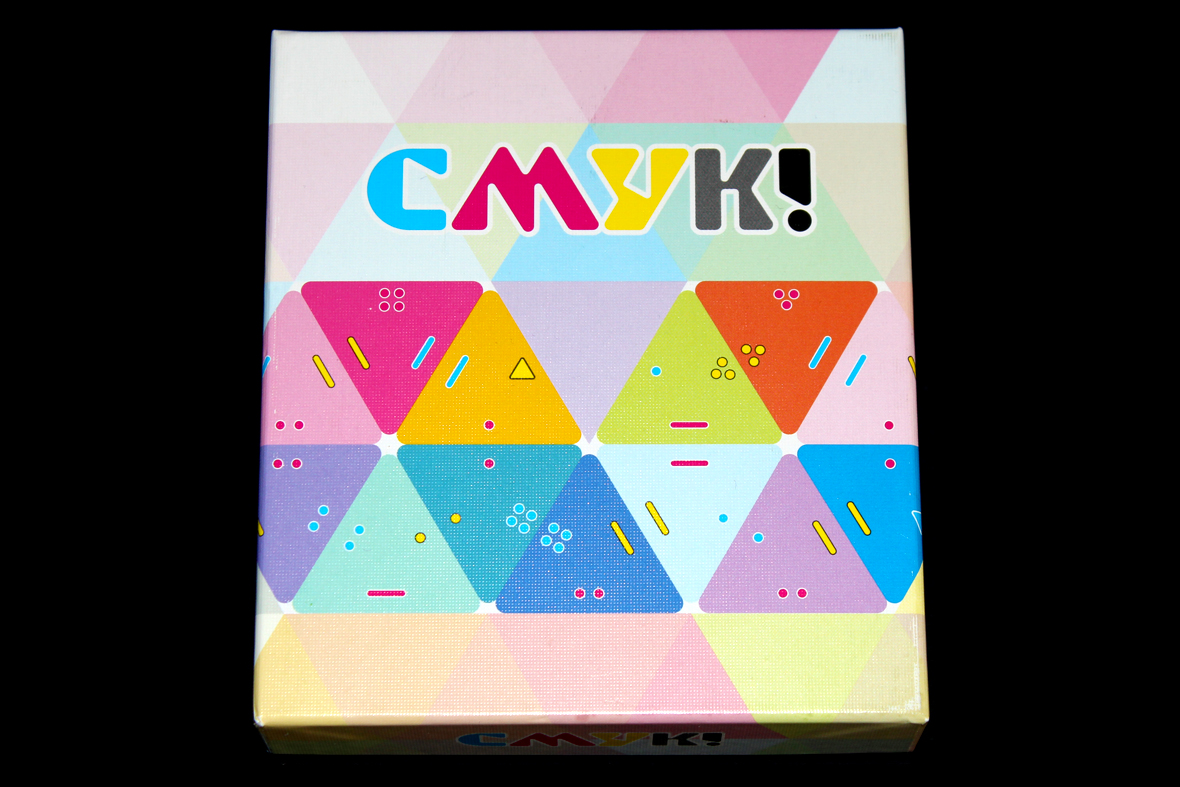 Full disclosure: A review copy of CMYK! was provided by Big Cat Games.

Hey look, out of nowhere, three more doujin games! I’m trying to rush a few of these before PAX Unplugged, where you can pick them up from Big Cat Games, but that just requires realigning my schedule a smidge. Thankfully, if there’s one thing I’m known for, it’s flexibility under deadline pressure. But rather than dealing with that, let’s talk about CMYK!

In CMYK, you have an unfortunate situation. You ordered many white tiles, but they’ve come in a variety of different colors. Naturally, you can arrange them somewhat to help solve that problem, but as a mosaic tile craftsperson, you can only do so much. Which of you will be able to best satisfy your demanding clients?

Setup isn’t too bad.  You can kind of ignore the Victory Point tiles: 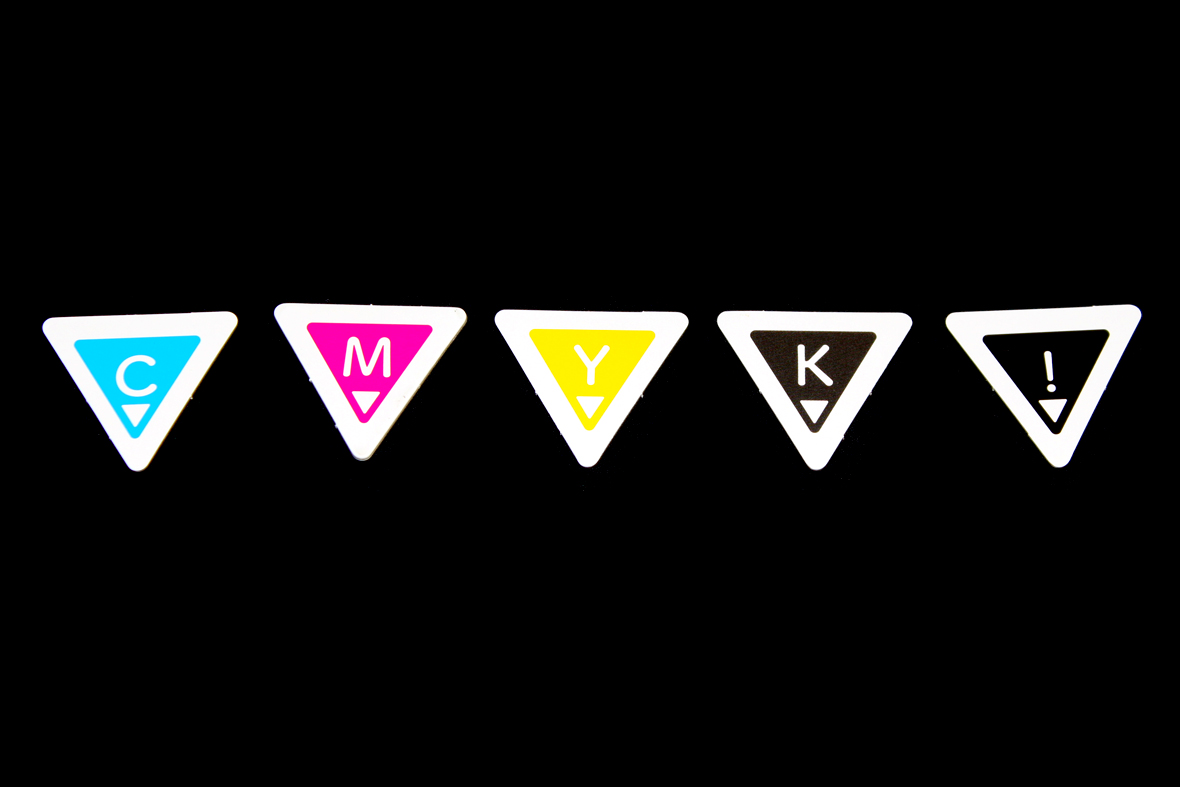 You really don’t need them, but they’re there to help. Shuffle the Private Objectives and give each player one, face-down:

Then, reveal one of the Public Objectives face-up:

Finally, shuffle the tiles and make stacks of 12, depending on your player count:

Any leftover tiles won’t be used. You’re all ready to start!

Before the game starts, each player takes a triangle tile off one of the stacks (do not take a black K-tile) and passes it to the player on their left. That’s their initial tile. 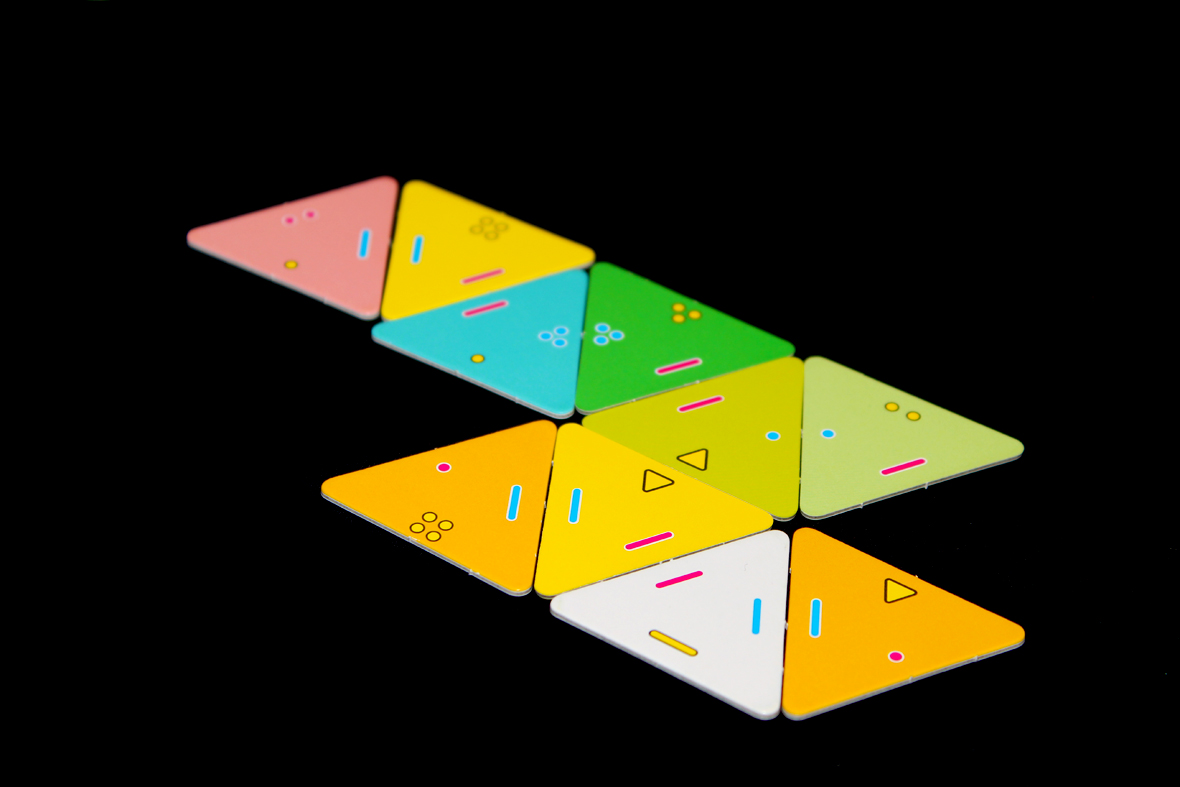 Now, players take turns being the Caller. When the caller says, “take!”, you take a tile from the top of one of the stacks. Place it adjacent to one of your existing tiles so that the shapes and colors on the edges of the triangles match (like a single magenta dot touching a single magenta dot). If you cannot place a tile, wait until a tile is revealed that you can place. If you cannot place any tiles, remove one tile from the game. Once a tile is taken, the previously-taken tile is locked. Until then, you may move them at your leisure.

The black tiles are K-tiles, and they are considered wild. You may either place it or discard it when you place it. If you place it, reveal another public objective card. Note that the K-tile is worth -3 points at the end of the game.

The game ends when all tiles have been exhausted. Then, score!

There aren’t many beyond the increase in triangles available at higher player counts, save for the obvious one: there are more hands grabbing at tiles you might want, and it’s harder to track what your opponent might be going for when you’ve got four opponents instead of just one. This means that a lot of things you need might suddenly get snagged, and you’re going to have to wait a lot longer for it to be your turn to call (and usually, when you call, you get the first piece). My advice for this is to be a bit flexible about what you need and not build yourself into a corner, but that can happen in a two-player game, too, if you’re not careful. Either way, I still think it’s fun at any player count. No preference. 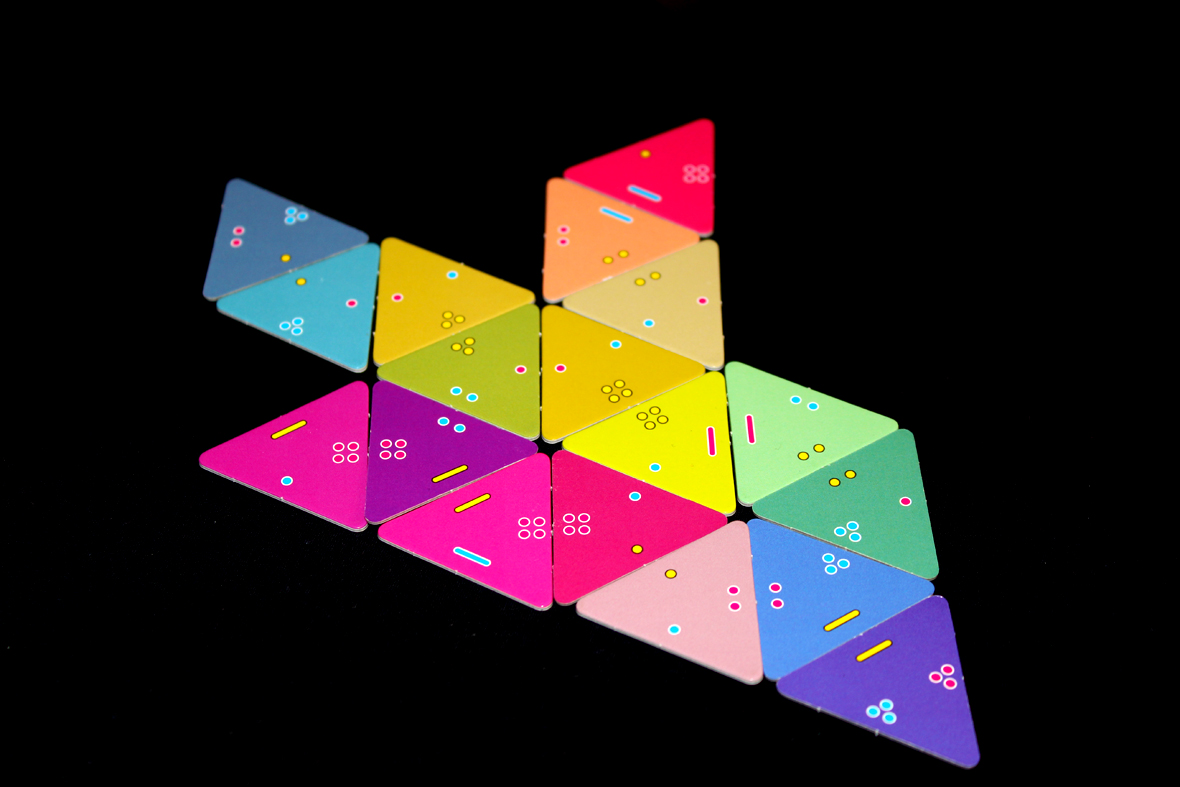 Overall, I think CMYK! is a blast. I’m already a big fan of pattern-matching and real-time games, and to combine the two with a really novel color scheme is pretty cool. Even better is how it plays with color theory, which I always like. I’m not going to say I learned a ton about it or myself from playing, but I got to slap a few tiles down and yell at someone else for stealing something I wanted, which is pretty much the dream, anyways. Either way, the game’s pretty simple to learn and plays fast, as well as scales up nicely to five players, which is always a bonus (I find five to be a particularly irritating group number to seat, generally speaking). I really think my only complaints are that it would be nice if the game tiles were bigger both for gameplay and aesthetic reasons; the game’s too pretty to be as small as it is. It’s got some good variety, though, and despite preaching hexagons it plays a lot with its own geometry in ways that I think are particularly interesting. And that’s super cool! I wish more games were willing to experiment in that space. If you like those kinds of real-time games or if you’re looking for something new to sink your teeth into, I’d definitely recommend checking out CMYK!; I think it’s a really neat little game.