Full disclosure: A review copy of Draftosaurus was provided by Luma Imports.

Alright, powering through some more Gen Con games! This one came out a bit before Gen Con, but, that’s the big con I go to, so that’s where I pick up the Origins – Gen Con releases in that window. It mostly works out. Anyways, Luma Imports has a few different publisher imprints they support. One such is Ankama, which targets lighter-weight and casual games. Right up my alley, so here I am, ready to start trying that one out. Let’s launch into Draftosaurus and see what’s up.

In Draftosaurus, it’s time to open your dream park: a dinosaur-themed one! Naturally, by the law of improbable averages, your hated rivals are also opening up dinosaur parks within the near future, and only one can be the best park in town. Share your supply lines, get the dinos you need, and become the greatest park! Will you be able to deliver on your dinosaur dreams? Or will your hopes of becoming a dinosaur theme park owner go extinct?

So setup is really quick. Give each player a board, on the Summer side:

If it’s not your first game, try the Winter side! Both players have to use the same side, though. Next, break out the dinos! 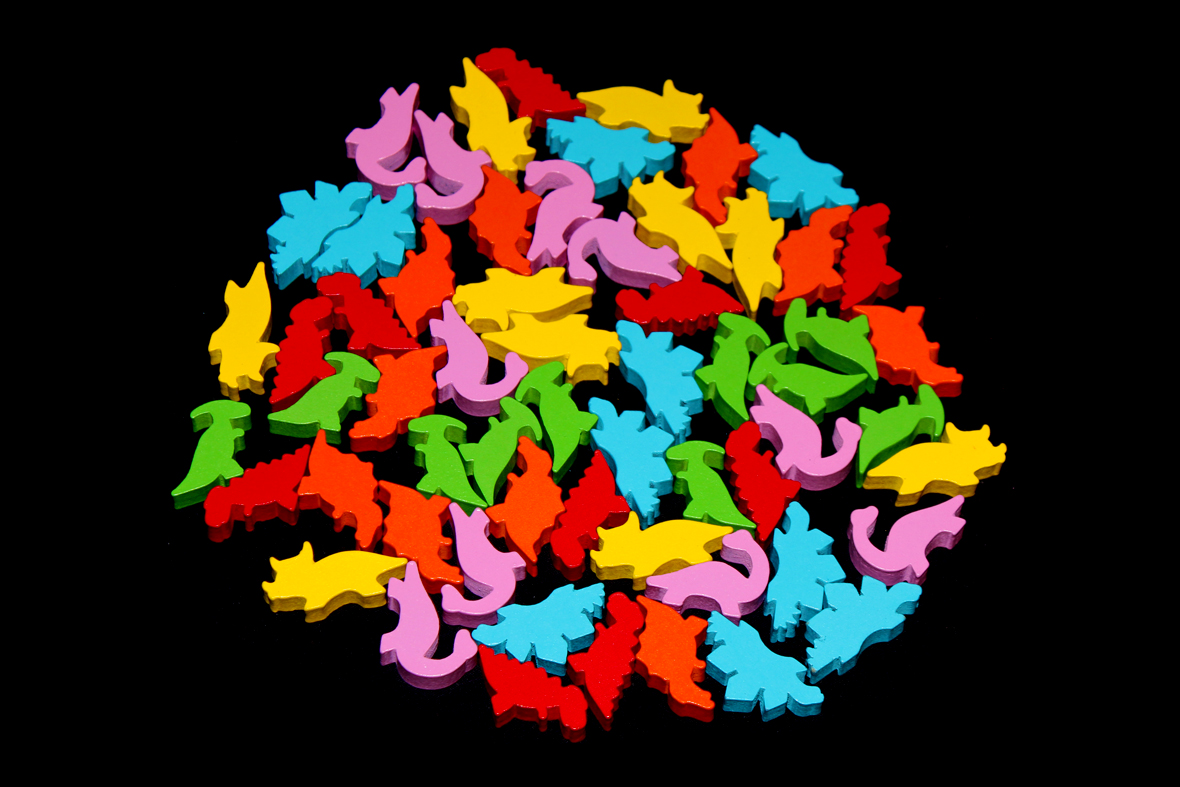 Use different numbers depending on your player count:

Put the dinos into the bag, and set out the placement die:

So, a game of Draftosaurus is a game of picking dinosaurs and adding them to your park. There are two different modes: Summer and Winter, and I’ll cover each in turn.

Summer Mode is the starting game, and it’s played on the Summer side of the board. Like the Winter Mode, you’ll be placing dinosaurs in pens following some rules. Let’s dig into them.

Play’s pretty simple. Have each player take six dinos from the bag to start the round. 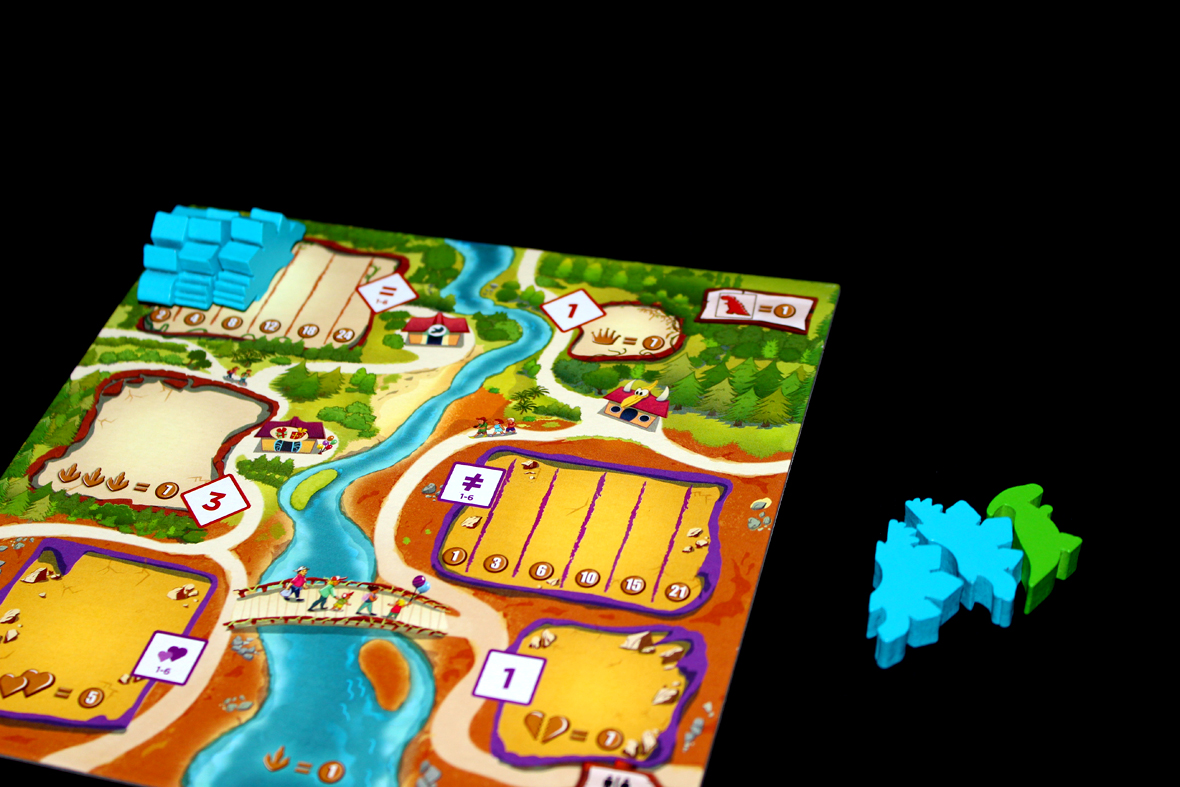 The current player then rolls the Placement Die. It depicts some condition that all other players must follow for this turn. Usually it tells you what region of the board you can place a dinosaur, but occasionally, it limits players to placing a dinosaur in any region without a T-Rex. Each Pen also has restrictions; some must be the same, others must be different, and one pen only wants three. Additionally, at any time, you may place Dinosaurs into the River instead of placing them in a pen. Either way, once you’ve placed your dinosaurs, pass them to the left. The current player passes the die to the left, as well. Repeat this step until all dinosaurs have been played.

Once the last dinosaur is played, the round ends. Start over by drawing six more dinosaurs. Generally, I pass to the right, now, but the rules don’t suggest that that’s what you’re supposed to do. Either way, once you’ve completed this round, the game ends! Total your scores and the player with the most points wins! Note that there’s a bonus: each pen with one or more T-Rexes in it scores a point. Additionally, every Dino in the river scores 1 point.

The Winter side is interesting, as well. It takes the existing pens you remember and makes them a bit more … complicated. Now, instead of pens that reward you for the same dinosaur or different ones, there are pens that score you points for placing alternating types of dinosaurs in them, building a pyramid of different dinosaurs, or even for how many dinosaurs of that type your opponent has.

Beyond that, the game plays the same as the Summer Mode.

You can play a Summer / Winter Mode by playing one of each game and then totaling your scores, if you want. I don’t really like that sort of thing, so I’d just score them as separate games.

For a two-player game, you play over four rounds following the normal rules. Instead of taking just one dinosaur, however, you take one dinosaur and choose one to throw away, removing it from the game. Hope that wasn’t important. You’ll still end up placing 12 over four rounds, though, so the player with the most points wins!

The major differences are in the two-player variant, since it’s a lot more focused on denial and hate-drafting. See something your opponent wants in your hand? You’re totally within your rights to chuck it. It’s rude, but, that’s literally why they call it hate-drafting. Beyond that, the game plays the same at most player counts, though the idea of variance comes into play a bit more as you add players. I mean that to say that it’s possible to have more dinos of one color in play (since more are being used), so there are some unlikely scenarios where you could potentially get a preposterous number of the same dino, if you’re lucky and your opponents are kind. At lower player counts, with fewer dinos of one color, you’re unlikely to get, say, 7 T-Rexes, since there may not be 7 T-Rexes in that game. If you’re looking to get nasty, though, try this one at two players. For a less violent drafting experience, I’d say keep it to three or more players; there’s no real reason to hate-draft if you’re just going to mess yourself up. It’s kind of interesting how much of a shift there is between the player counts, though, but it makes sense since two players is easier to play hatefully.

Overall, I pretty solidly enjoy Draftosaurus! I think its main appeal is that it is simple and very cute, both of which are great things for an introductory / casual drafting game. It’s a pretty straightforward way to learn the mechanic, and it’s presented in one of the most delightful possible formats; dinosaurs! Add in the extra meeples and you’ve got yourself a really great overall experience. I could imagine someone getting this just for the meeples and still being pretty satisfied. One thing that I appreciate is that they have a variety of game modes available from the start, with the double-sided boards and all that. It would have been super if they had had slightly thicker boards, sure, since you’re placing all your meeples on there and there often isn’t that much space, but it’s not the worst thing in the world, being real. The only thing I find particularly concerning about the game is the amount of hate-drafting in the two-player variant, but I think that’s a consequence of two-player drafting games, to be honest. Either way, I think at its core it’s a nice, simple, and pleasant game, and if that kind of thing sounds appealing to you or you’re looking for a straightforward variant on drafting games, Draftosaurus might be the game for you to check out! I’d especially recommend it for gamers who are fans of dinosaurs.