2 players.
Play time: 10 – 20 minutes.
BGG | Board Game Atlas
Logged plays: 2ish. Each round is essentially its own game.

Let’s keep the party going with more Gen Con reviews! Good Games Publishing has been supporting the site for a while, and they pushed out Unfair a while back (which I really enjoyed, once I got rid of all the take-that bits; I really just want to build a theme park in a board game, y’all). Now they’ve got two new games hitting the pipeline; a two-player butterfly game called Fluttering Souls, and another three- to five-player game called Fairy Season. We’re covering Fluttering Souls first, so let’s dive right into that one and see what’s up.

In Fluttering Souls, legend tells of a white butterfly coming to visit a bereaved person when their loved one has passed away. To earn that, though, you have to take care of the existing butterflies. I mean, in general, you should be nice to butterflies, but now you have an incentive. Will you be granted a visit?

Setup is pretty fun, honestly. Set aside the Butterfly Tokens for now:

Shuffle up the Layout Cards, make a deck, and reveal one:

This is how you organize the Butterfly Cards (dark cards are face-down), which you should also shuffle once you remove the Great Eggfly:

Place them in that layout (you’ll have two left over; set them aside); give the second player the Great Eggfly card, and you should be ready to start!

A game of Fluttering Souls is played over three rounds; in each round, players work to try and score the most points based on the butterflies they collect over the course of the game. It plays pretty similarly to 7 Wonders Duel, but without all the card effects, which is a nice simplification.

On your turn, take an uncovered card. That’s it. If, by doing so, you completely uncover a face-down card, turn it face-up. 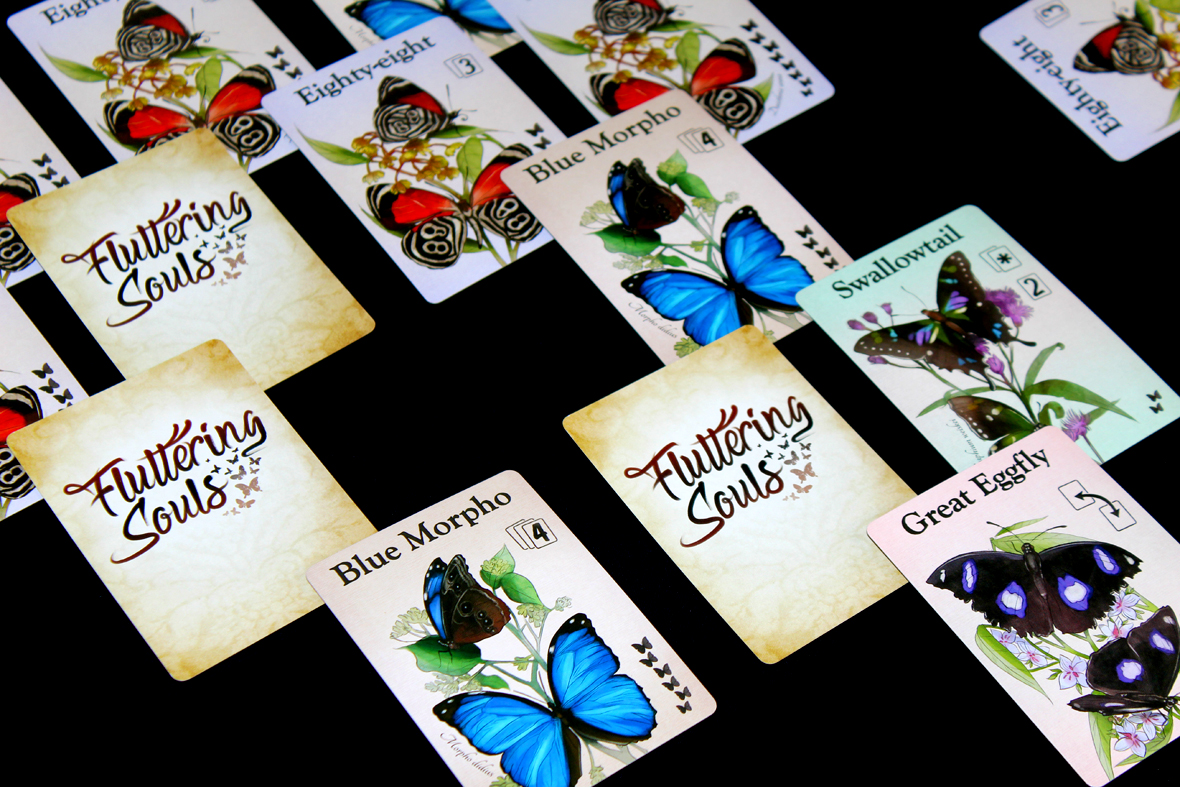 If you have The Great Eggfly, you may end your turn by placing The Great Eggfly back in exactly the same position as the previous card you took. This will force a player to take it if they want to re-uncover the card now below it. 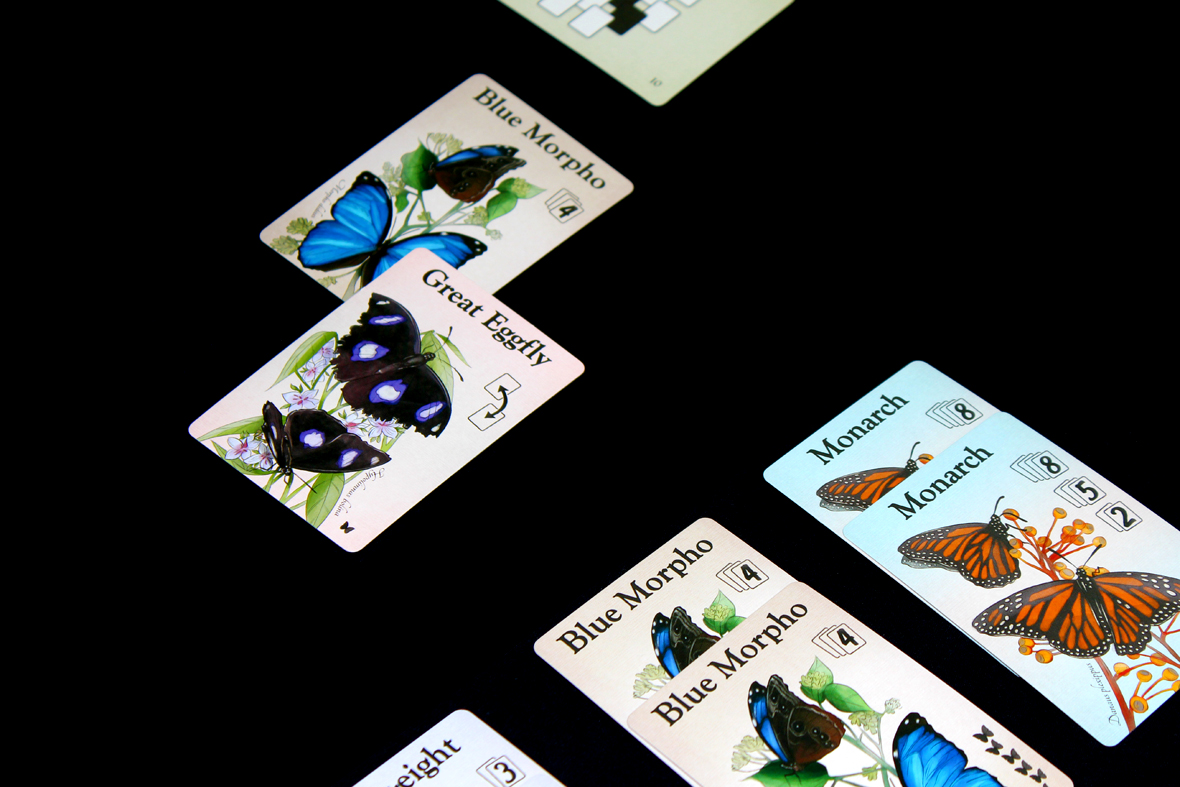 After all cards have been claimed, players score (each butterfly can only be scored once): 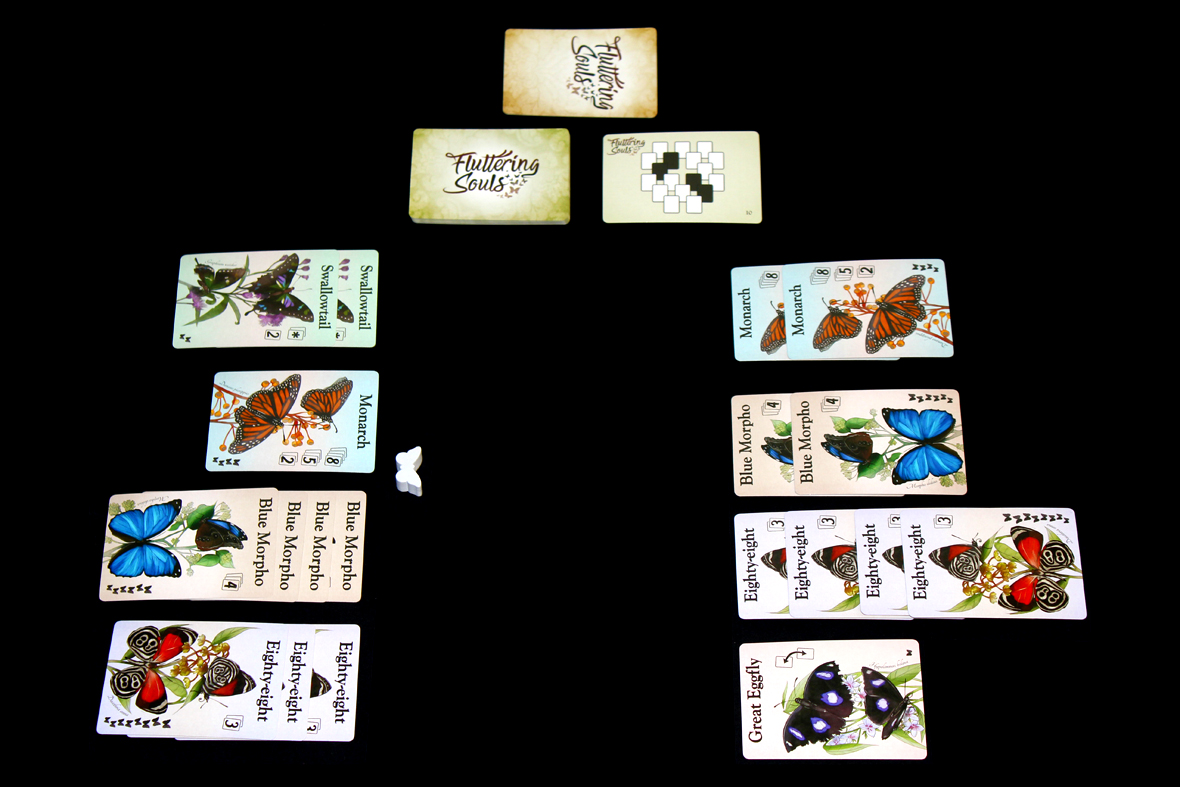 Overall, I actually was pleasantly surprised by Fluttering Souls! I thought the hate-drafting would be a bit of a deal-breaker for me, but given that the game is so quick to play, it doesn’t bother me nearly as much as I had worried! I think my one complaint might be that the game is a smidge too simple, but honestly I think the coolest thing it has is the multiple layouts; that keeps the game pretty fresh from play to play (and they’re also reasonably fun to set up). Another nice thing about it is its art and theme; I’m a fan of pleasant games (and even moreso mean games with pleasant exteriors [I see you, Arboretum]), and this certainly fits that criteria. I’m not sure what’s going on with the cards, but I can probably unbend them with enough pressure and time. I’ll figure it out. Probably not a big concern. Either way, I think it’s an interesting little drafting game, and I’m definitely hoping that this isn’t the last time I’ve seen a game based around this concept; just like the bugs it features, I think it’s got a lot of legs! Puns aside, if you like drafting games but only have one friend, you may enjoy Fluttering Souls! It’s remarkably pleasant for a hate-drafting game.