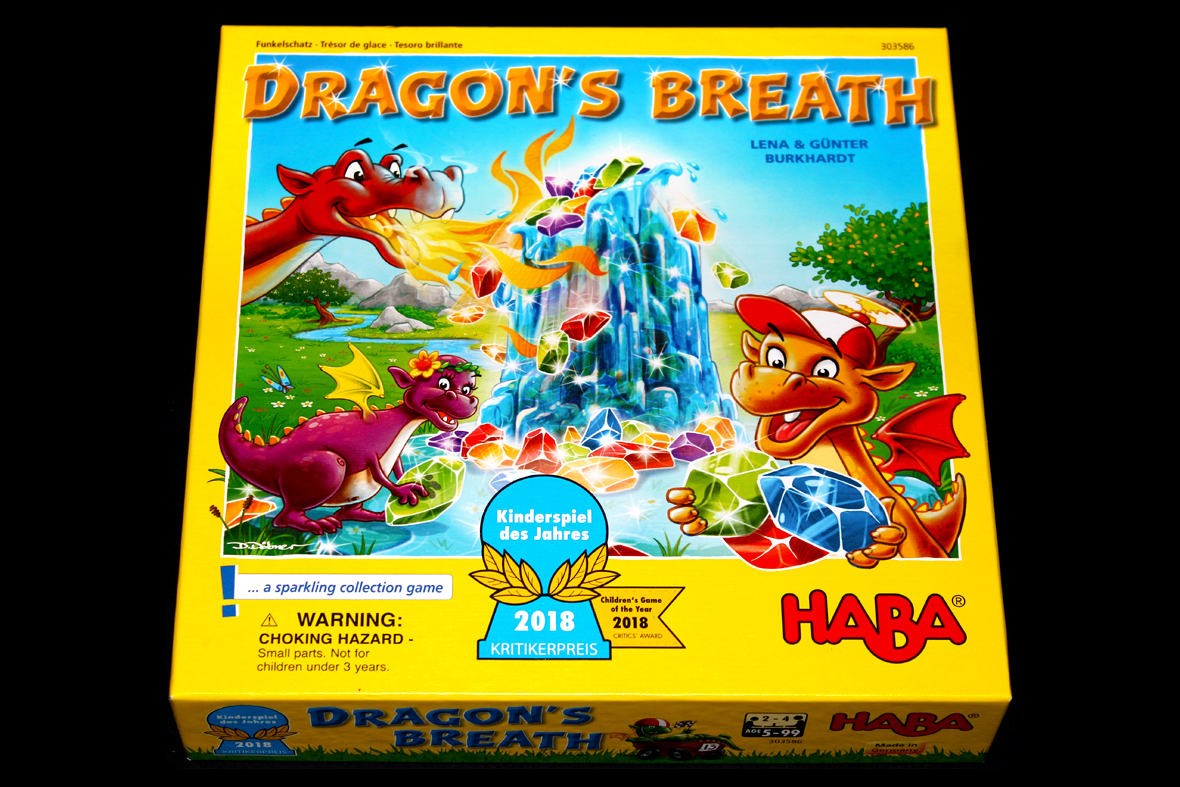 Full disclosure: A review copy of Dragon’s Breath was provided by HABA.

Alright, we’re back with more HABA! As promised, and to the shock of nobody. There’s still, checking my schedule now, a lot coming down the pipeline, so, hope you like games with yellow boxes. I kid; I only have a few of those left (Valley of the Vikings might be it, honestly). After that, we dig back into the Game Night Approved line with Karuba: The Card Game (growing on me even more), Miyabi, and who knows after that? The sky’s the limit. Anyways, let’s not put the cart before the horse; Dragon’s Breath is here, so let’s talk about it.

In Dragon’s Breath, players take on the roles of dragon children seeking sparkling stones locked inside of a large ice block. Kid dragons can’t do much in the way of fire breath, but adult dragons totally can, so, call dad, get him over here, stat. He’s happy to melt the ice, but insists that you play nicely and divide up the gems as best as you can. So you bet on what’s going to come out when. Will you be able to build up your hoard? Or will you just end up frozen out?

Not much to do there. Take out the box, and if you haven’t already, put the divider in the bottom, and then place the board on top of it: 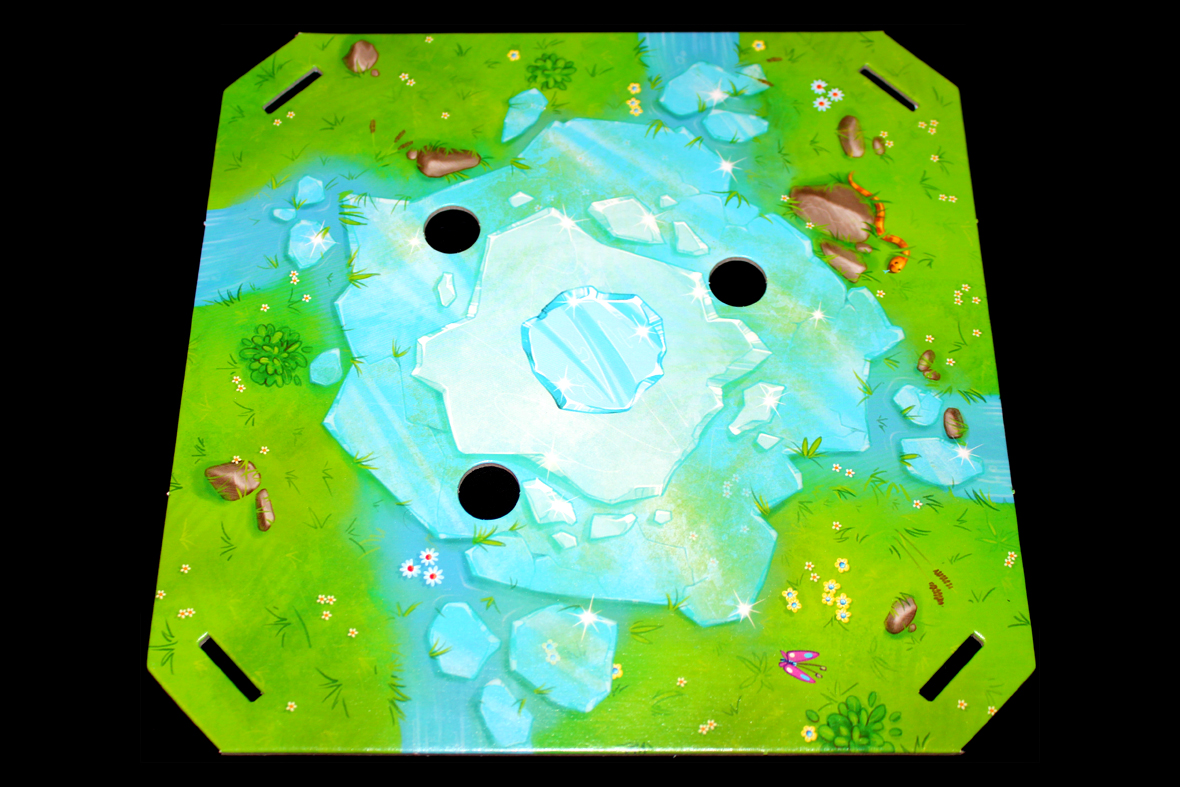 Give each player a Dragon Child, and have them slot them into one corner of the board:

Place the ice floe tile in the center of the game board, and stack 8 rings (9 if you’re playing a three-player game) on top: 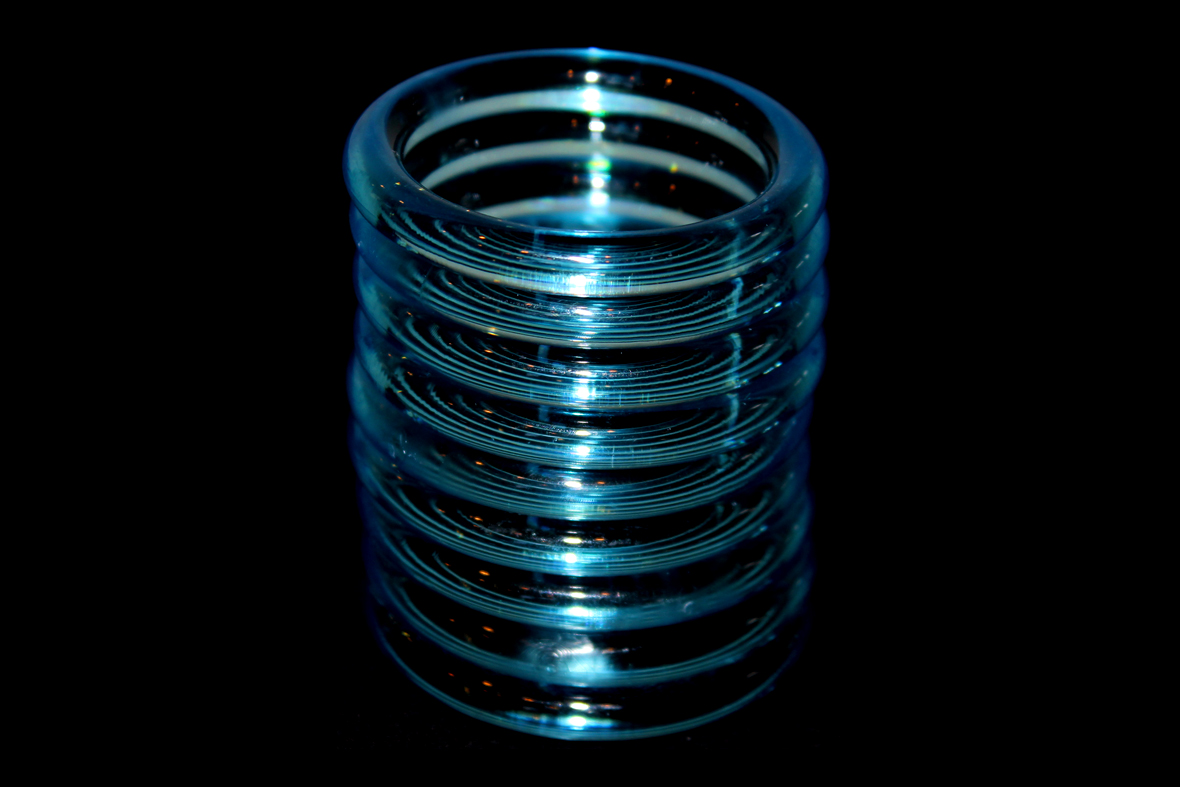 Now, add the stones to the stack of rings:

If some don’t fit, just … put them into the center holes in the game board. Try to do it randomly, if possible. Give Dragon Dad to the first player, and set the sparkling stone tiles nearby: 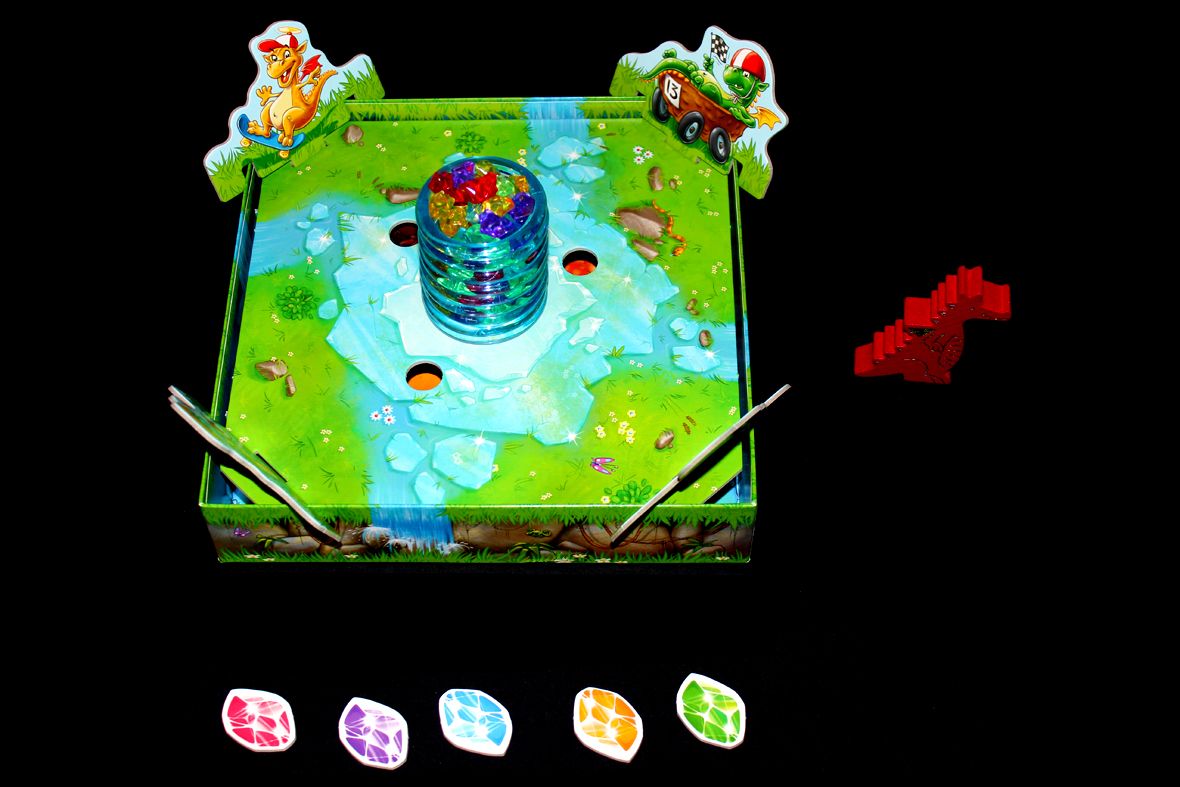 So, in Dragon’s Breath, you play as dragon children trying to collect treasure from this ice block. You … can’t, so you ask your dad to melt it with his fire breath. As dads do. As they fall out, you choose certain colors of gems to keep and bring them back to your caves. Once the ice is gone, the player with the most gems wins!

To start a round, draft the stone tiles starting with the player to the left of the first player. Draft until all players have a stone tile. In a two-player game, draft until both players have two tiles each.

Now, the player with Dragon Dad must lift the top ring off of the stack. If gems fall out, that’s fine, but you cannot touch other rings. You can apparently touch gems though, so, do with that what you will. Some stones may fall into the holes in the center; that’s also fine. Once the ring is removed, remove it completely from the game; it’s been completely melted.

Each player then takes the gems of their color(s) and moves them into their lair by lifting up their dragon child and sliding the gems behind them. If any gems are left unclaimed on the board, push them into the holes in the center. Finally, pass dragon dad to the next player and continue.

When the last ice ring is taken, the game ends! Divide the remaining gems that are not on the ice floe tile as you would normally, and then count your gems; the player with the most gems wins!

To play with younger players, just assign stone tiles at the start of the game and never change. For vaguely sneaky players, keep the stone tiles face-down so that no player knows what another player’s stone tile color is until it’s time to claim stones. 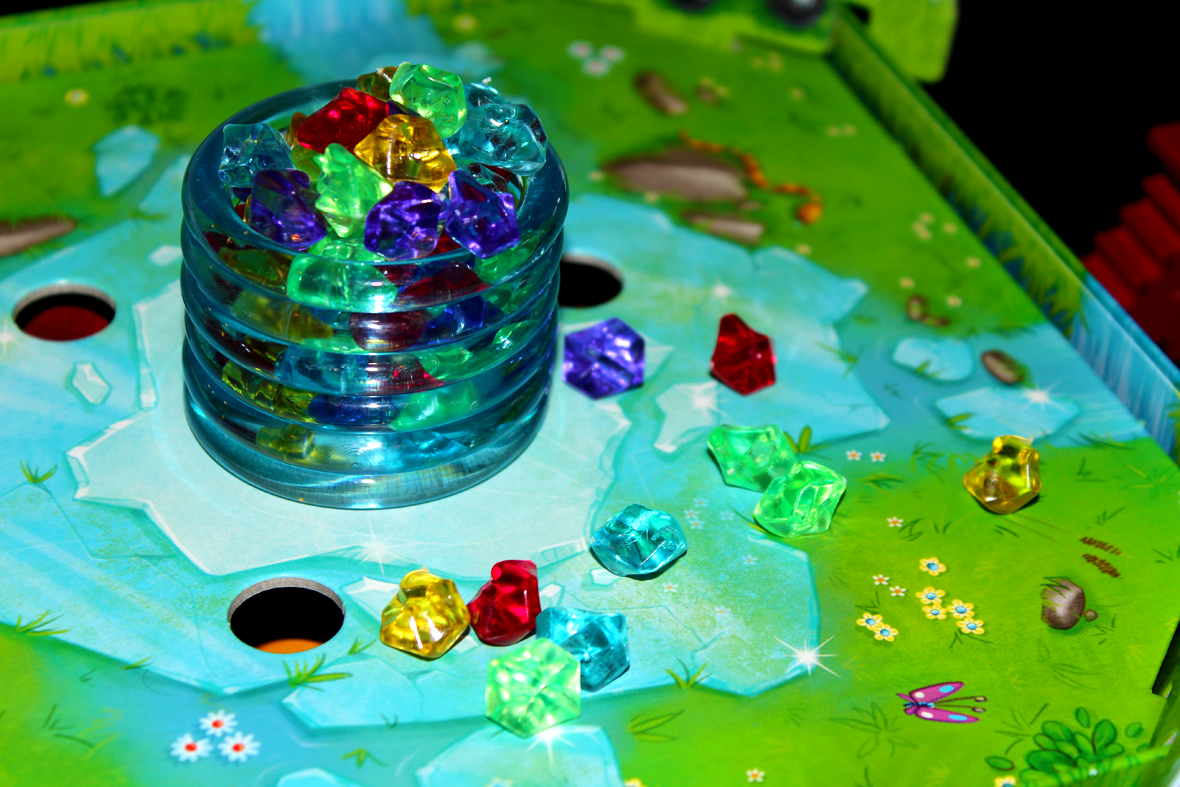 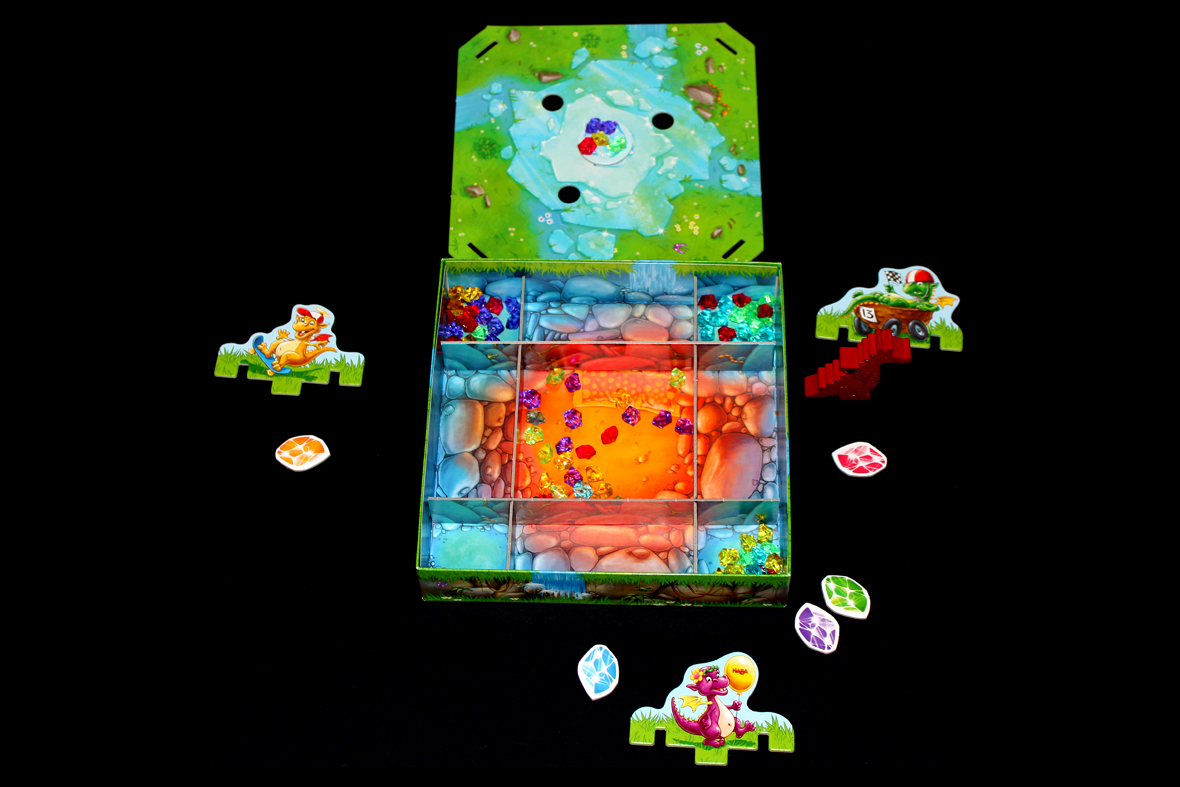 Overall, I think Dragon’s Breath is fine. It’s definitely a cute game for younger players, but I don’t see a lot of the appeal as an adult. This is to contrast it against games like Valley of the Vikings or ICECOOL where I feel like there’s a lot of fun still to be had with them (maybe that’s due to the dexterity component?). I wouldn’t say it’s bad; far from it, actually. I would just say that I don’t always feel like I have a ton of agency when I play beyond going after whatever I think will get me the most. The dexterity element is present but isn’t quite … whimsical? exciting? enough to really pull me in beyond thinking that it’s cool, and even that is likely due to the ice rings being super cool. I don’t personally have kids, but I think this might be a nicer game to test out in that space and see how they enjoy it (and that would make sense, since it did win the Kinderspiel a hot minute ago). Either way, if you’re looking for an award-winning kid’s game, this is definitely that, or if you like the idea of dragon dad melting the ice so that the gems inside come out, it’s also that. Personally, I’ve had fun when I’ve played it, as well, so if any of those things I mentioned apply or you want a quick and simple game, Dragon’s Breath might be for you?