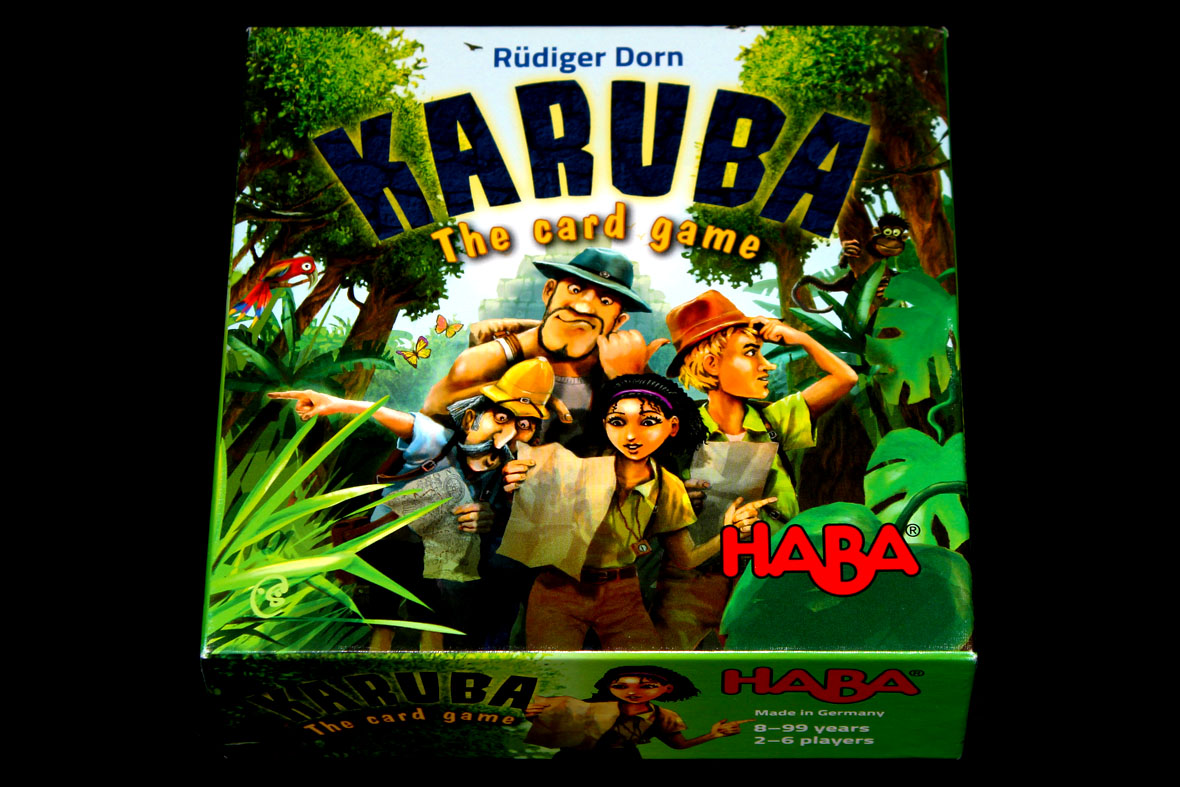 Full disclosure: A review copy of Karuba: The Card Game was provided by HABA.

More HABA titles! We’ve mostly powered through the yellow box games, so now we’re moving on to their next set of titles: the Game Night Approved line! These are a bit more strategy-oriented than the yellow box line, I feel, which are more family-oriented, but hey, in this economy, you’ve gotta be open to trying to capture different markets when you can. I covered one of the titles, Mountains, a few weeks ago, but let’s see what else is going on in this specific set of games with Karuba: The Card Game this week. Maybe more will follow?

In Karuba: The Card Game, you play as intrepid (but astonishingly rude) explorers working to cut a path through the dense jungle to the temples they’ve sworn themselves to explore. The thing is, you don’t really like sharing or competing all that much, so you’ve got to forge your own path if you want to make it to the temples and claim the treasures within! Will you be able to find your way through these dense forests?

Pretty much none. Set out this tile in view of all players:

It shows you what’s on the 16 cards. Give each player a card set: 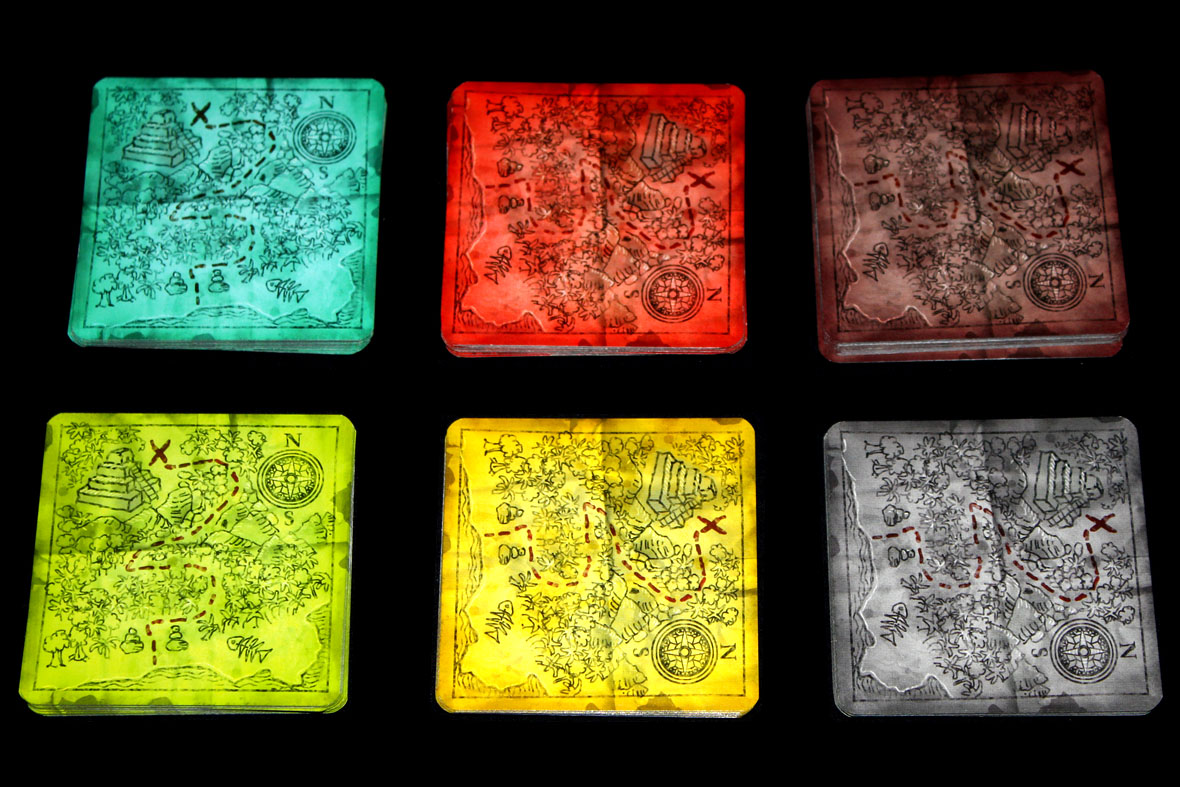 Have them draw three cards, and you should be ready to get started!

Gameplay is also pretty straightforward, which I appreciate. Your goal is to build out a 4×4 grid of cards, maximum, where paths lead from explorer to temple so that they can claim the treasures. But the real treasure is also the treasure you found along the way, so keep an eye out for those too. At the end of the game, once every card is played, the player with the most points wins!

The hard part, of course, is the actual card playing. To start a round, every player chooses two cards and then reveals them simultaneously. Add the numbers on the cards together; the player with the lowest sum (or tied for the lowest) must choose one of their two cards and remove it from the game. Harsh, but fair. 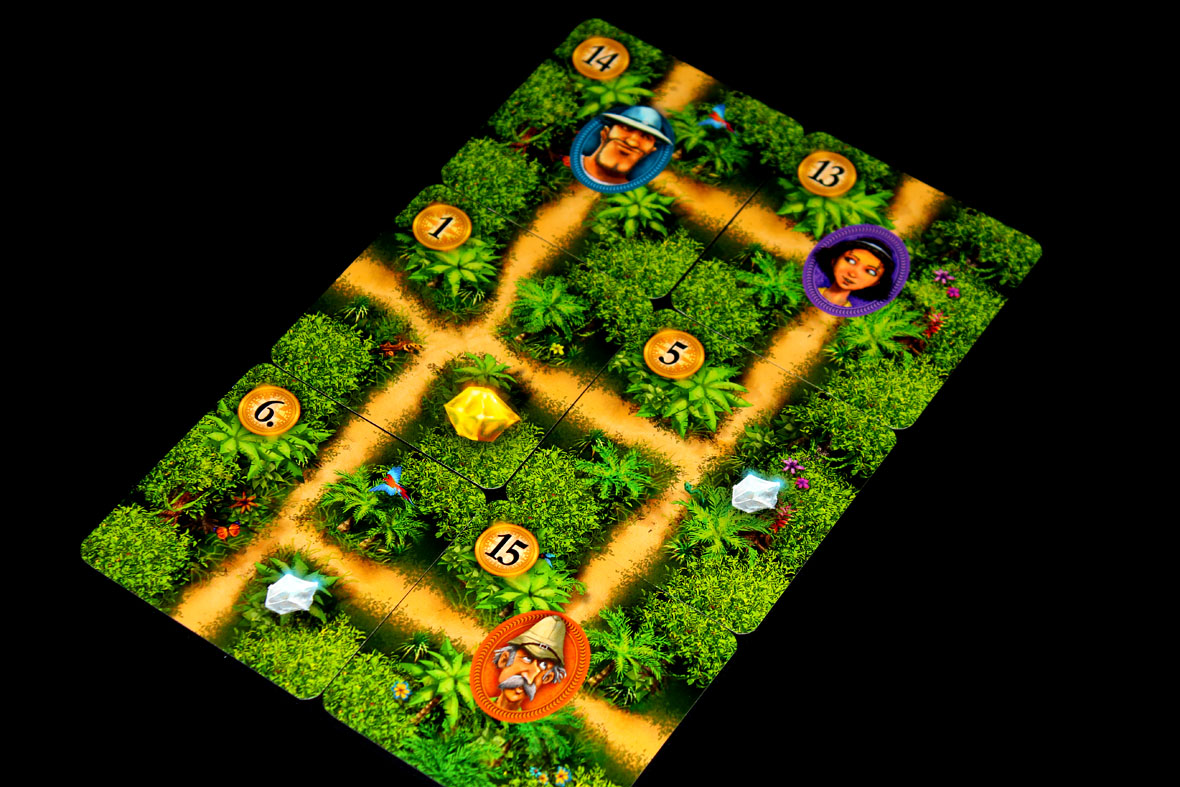 All players must add all remaining cards to their grids. Note that cards must be in a 4×4 arrangement and, unlike most games, may not be flipped or rotated; the number must always stay in the top-left corner. Roads don’t have to connect to other roads, but once a card is played, all subsequent cards played must be played adjacent to at least one other card. 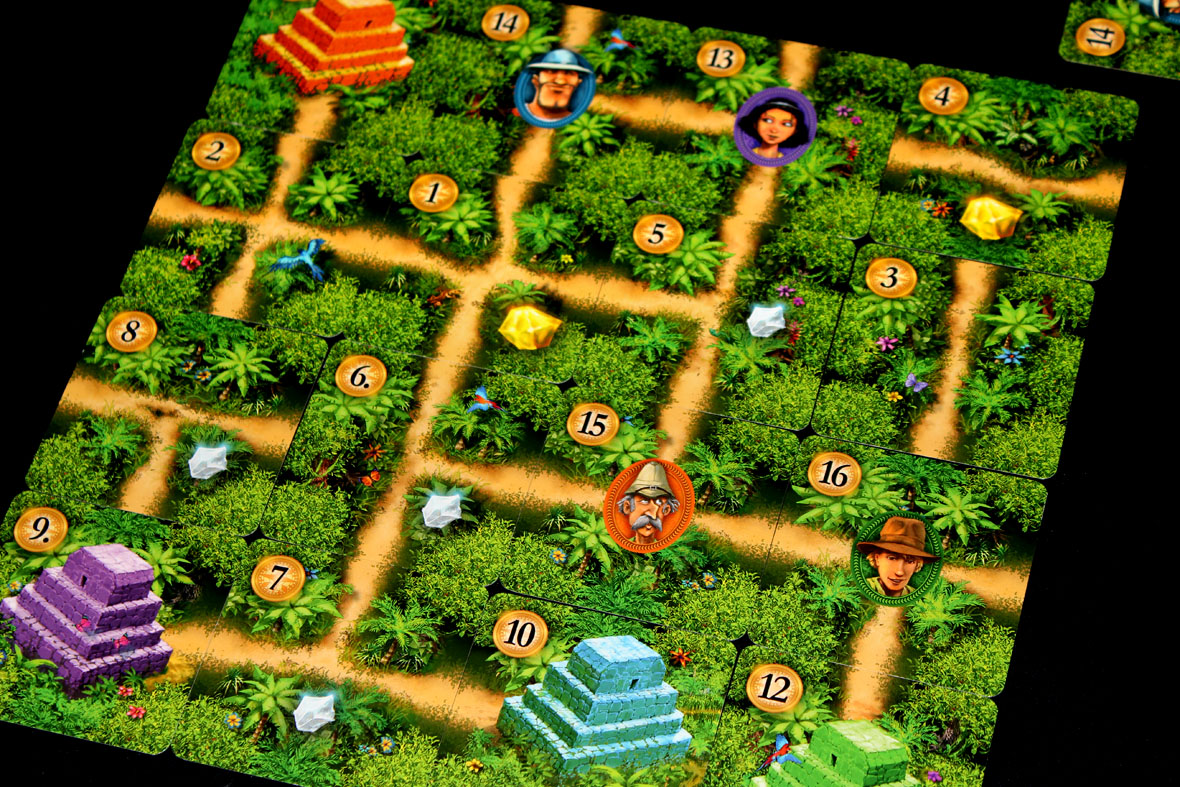 Once all cards have been played, you score! Score as follows:

Nothing else scores points. The player with the most points wins!

Pretty much none, gameplay-wise. The major change is that at lower player counts the game becomes much more of a knife fight in a phone booth, since there are fewer players to play “the lowest” card combination. At two, it’s either one or both of you, but at six, there is all kinds of variance based on who draws what and what they want to play. You’ll see generally fuller boards at higher player counts, for that reason. Beyond that, like I said, there aren’t that many differences. I do enjoy the tension of the plays at lower player counts, though, so I’m a bit inclined to say that I prefer this at two. It’s also a relatively low-key game to  learn, so, it makes for even a great date night or 1:1 hangout game. That said, I don’t have a problem with it at higher player counts; I just enjoy  the  dramatic tension of playing this with fewer players. I’d happily play it at any player count. 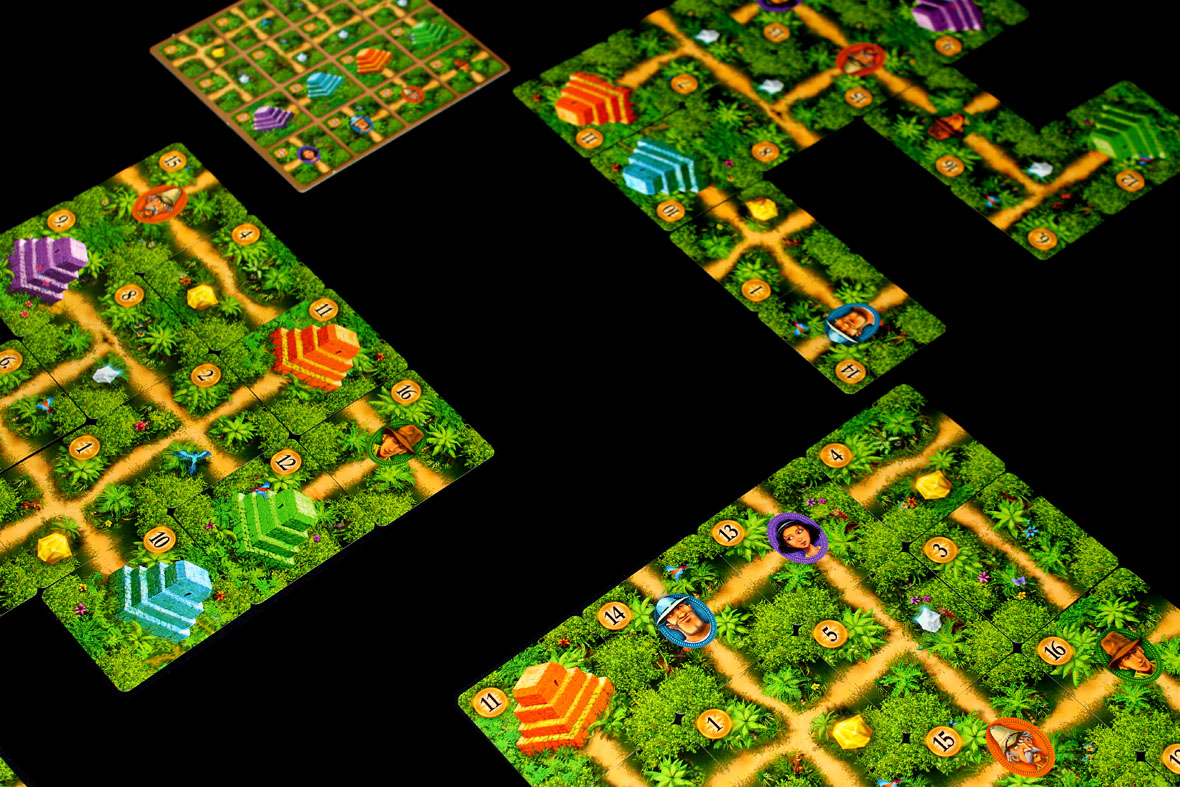 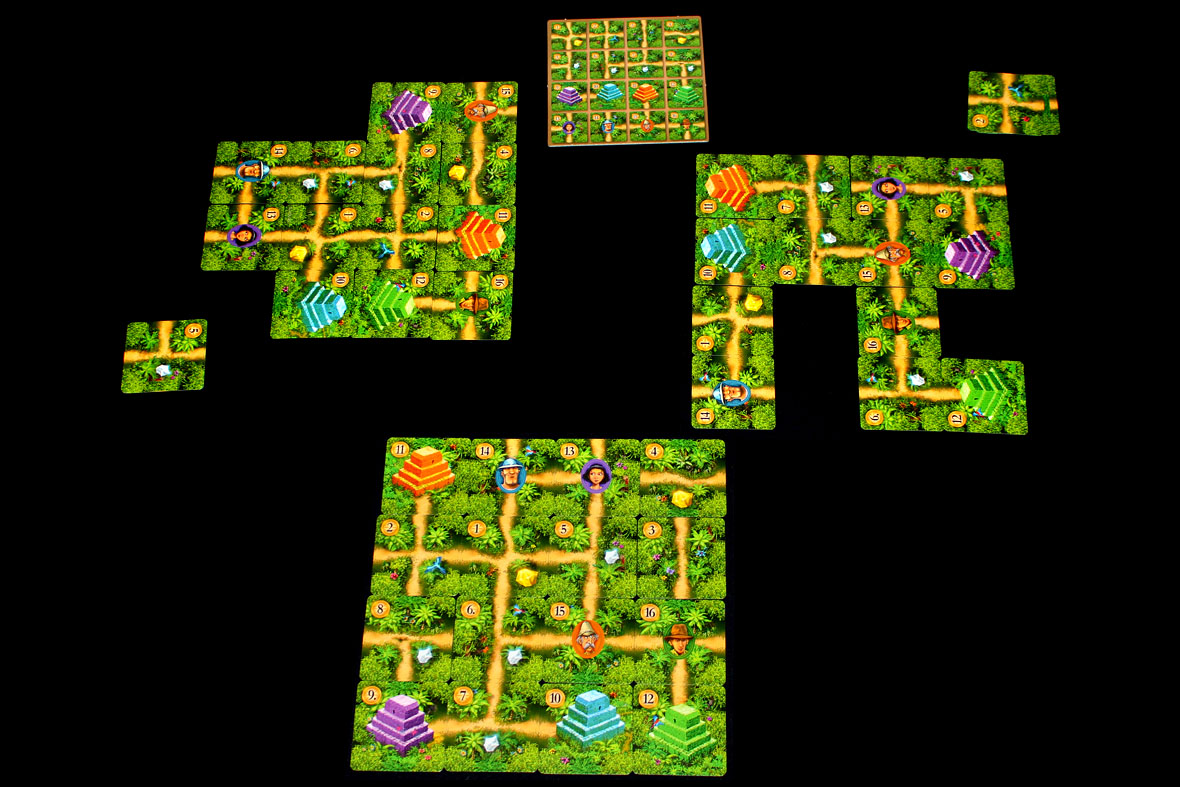 Overall, I kind of love Karuba: The Card Game. It’s so many things that I like all wrapped up into one game! It’s got path-building, which is always one of my favorite mechanics; it’s dead simple to set up, which means I can just get it to the table constantly; it’s interactive without being overly destructive, so players feel like they’re playing together but not enough to really mess each other up; and it’s so portable! It’s really an impressive little game. I also really like its numbers game as a way to add interaction to other multiplayer solitaire games, mechanically. I think it’s a smart little design choice (though I’m not sure if this is the only game that employs it). As with all grid-based card games, one wrong move can really mess you up, so I do kind of wish this were tiles instead of just cards, but I understand the desire to keep the price point lower for a game like this. I’d also love to see if it’s possible to expand a game like this; maybe 5×5 grids or adding additional special cards would be cool. It would be really interesting if there were a bunch of 0-value cards that were extremely good. But I digress. If you like the thrill of exploration, the tension of potential denial, or just really want to build some paths, I think Karuba: The Card Game might be right up your alley! It certainly was a game I enjoyed.