Full disclosure: A review copy of Trash Pandas was provided by Gamewright.

I’m trying a new thing for the next couple hours I’m stuck on this airplane, which is writing board game reviews! Hooray. It’s very cramped on here and it doesn’t smell great, so that’s all very fun. I guess I could have watched a movie? Who knows. I’m sick of travel. What I’m not sick of is board game reviews, so, let’s look at Trash Pandas, a Gamewright title.

In Trash Pandas, you take on the role of aggressive raccoons who are seeking to establish themselves with goods. Naturally, all the goods they get are garbage, but we don’t have to tell them that. They’ve gotta be sneaky, though, otherwise they’re going to get kicked out of the trash they love so much. Will you be able to sneakily steal your way to victory? Or will you end up trashless?

Shuffle the cards and place them in the center: 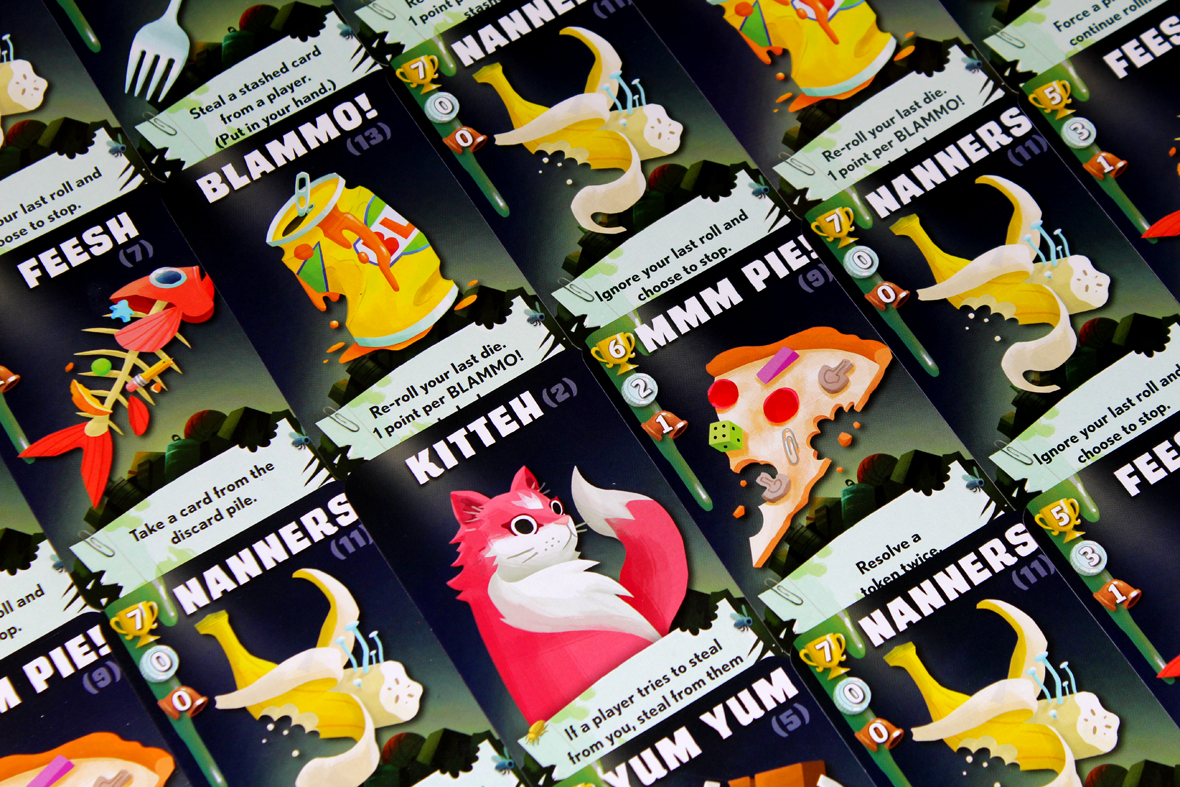 Place the tokens out, as well;

Give the start player the die and 2 cards: 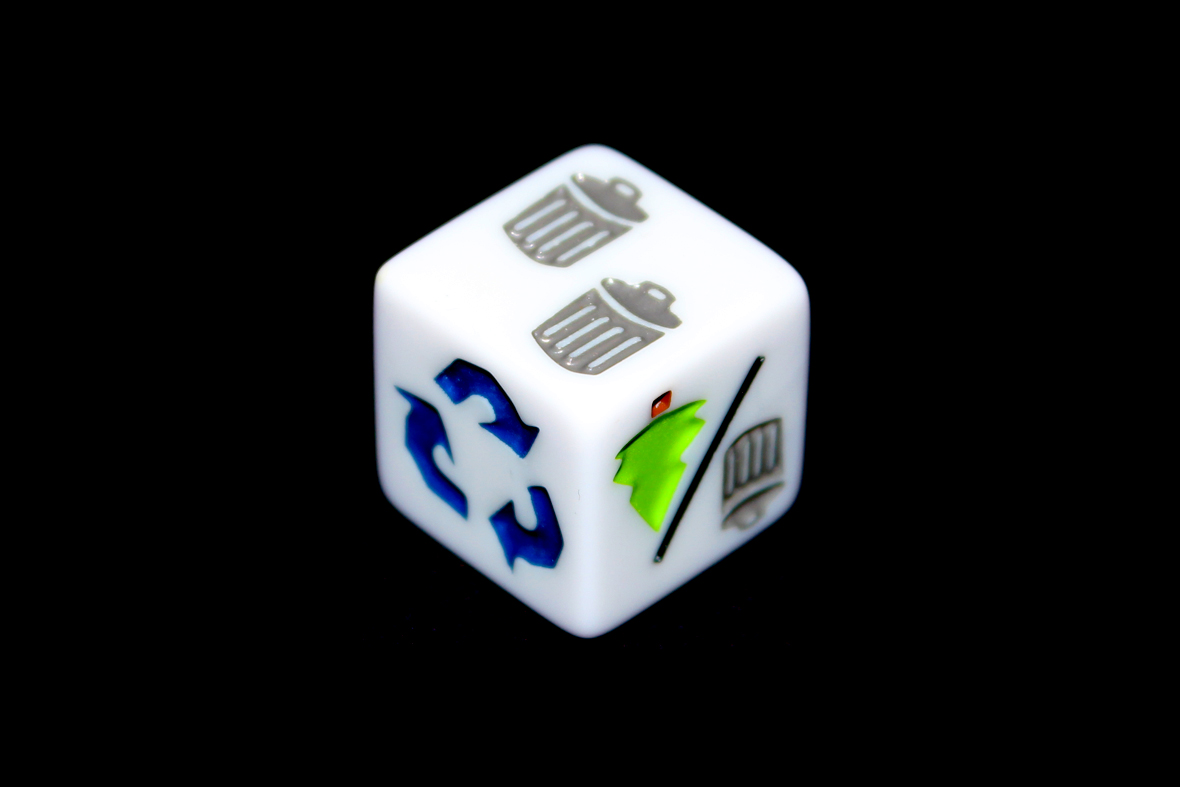 Give players one more card each in turn order: 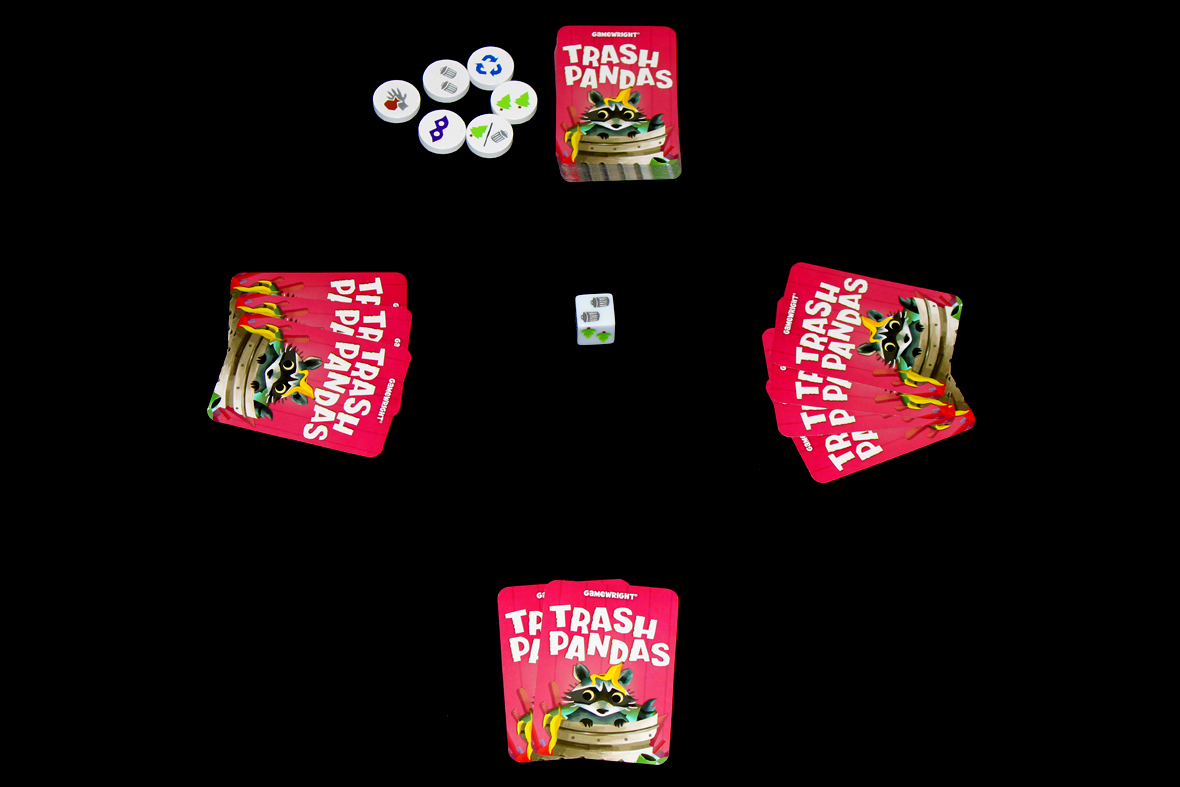 A game of Trash Pandas is pretty simple. You’re raccoons and you want to stow away junk to enrich yourselves. As you do. However, try to take too much trash in one go and the homeowners you’re liberating your goods from will likely get upset and chase you off. Again, expected. Once the game ends, the player with the most points wins!

On your turn, roll the die and take the pictured token. You may either stop rolling, or continue rolling. If you continue, you may roll and take tokens until you choose to stop or bust, which is when you roll a die face that matches a token you already have. When that happens, you immediately stop rolling and draw 1 card. Your turn ends, and you do not resolve any tokens. Tough! If you ever claim all 6 tokens, you may immediately take another turn after your turn ends.

When you resolve tokens, they generally let you draw cards, stash cards, steal cards, or sometimes a mix of those. As you’re doing this, you may want to use cards to bolster some actions. You cannot use cards gained this turn for their effects; you can, however, stash cards you drew this turn. No problems there. Stashed cards can potentially provide bonus points at the end of the game.

When the final card is drawn, the game ends after that player’s turn. Now, reveal all stashed cards and calculate who has the most / secondmost / etc in each category. If there’s a tie in a category, award all tied players one fewer point than they would normally earn for gaining that place.

After that, the player with the most points wins!

I’m not a big fan of the two-player game in this one. It really feels like it comes down to which player rolls better, especially early in the game, and there’s not a lot of things that mitigate that (especially if other players aren’t trying to pile on the leader). Even then, that’s not my favorite mechanic, but at least it’s somewhat of an equalizer. If you run out of cards in a two-player game, you’re essentially dunked, as well. Your one card will likely get stolen if the other player rolls well, so you can never build up your raccoon generational wealth. And that’s kind of frustrating? At higher player counts, players tend to leave the player with one card alone for a bit out of some sense of fair play, which means you’re never dunked out completely. And it’s not your opponent’s fault, entirely! They have to steal from someone. Either way, I prefer higher player counts for this one; it’s also a lot more dice rolling that you’re not personally invested in, so you can cheer when they fail. 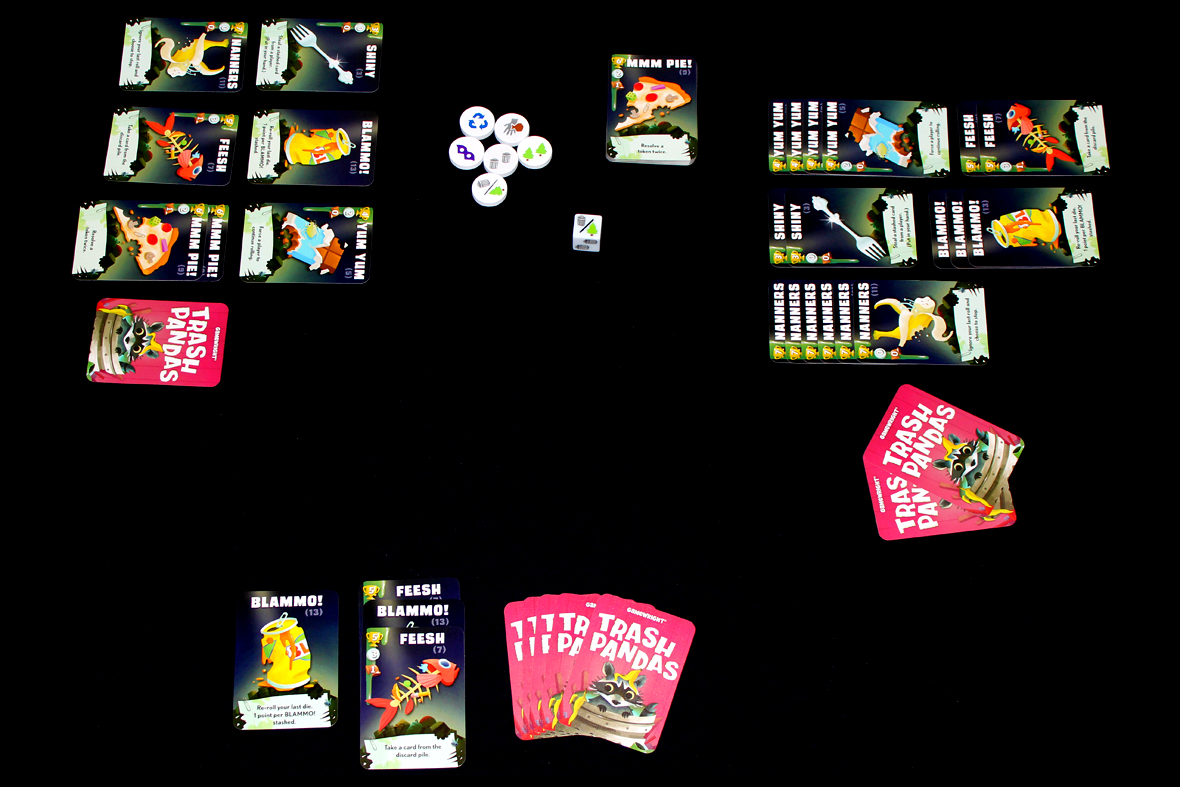 Overall, Trash Pandas is okay, though not entirely my cup of tea. I waffled a bit between “fine” and “okay”, but settled where I did because I feel like there are plenty of games where I have a lot of control over my turn despite it being a press-your-luck game (Quacks, for instance) and I just don’t get that vibe from this one. That’s somewhat okay, since it’s a relatively short game, but when that happens I end up comparing it to other short games and trying to figure out what I like better about this one. The major things that stand out for me are the art and the component quality, to be honest; I’m a fan of raccoons but not enough that I would pick a game with a raccoon theme over a game without one on theme alone. That said, its simplicity does do it a lot of favors; it’s not a bad introduction to the genre, and there are plenty of people that are going to find its whole whimsical-raccoon thing really endearing. I somewhat do! I think it just comes down to feeling a major lack of agency and control when I play, which even for a short game isn’t my favorite. If the deck were maybe half the size or something, I’d probably be a bit more favorable on this one; I find that my need for agency is inversely correlated with the length of the game (as is to be expected from most people, in my experience). But yeah, if this were a microgame, cute! Beyond that, though, I kind of wish I had either fewer cards or more control. If that doesn’t bother you, though, or you just really love raccoons, you might be interested in Trash Pandas!