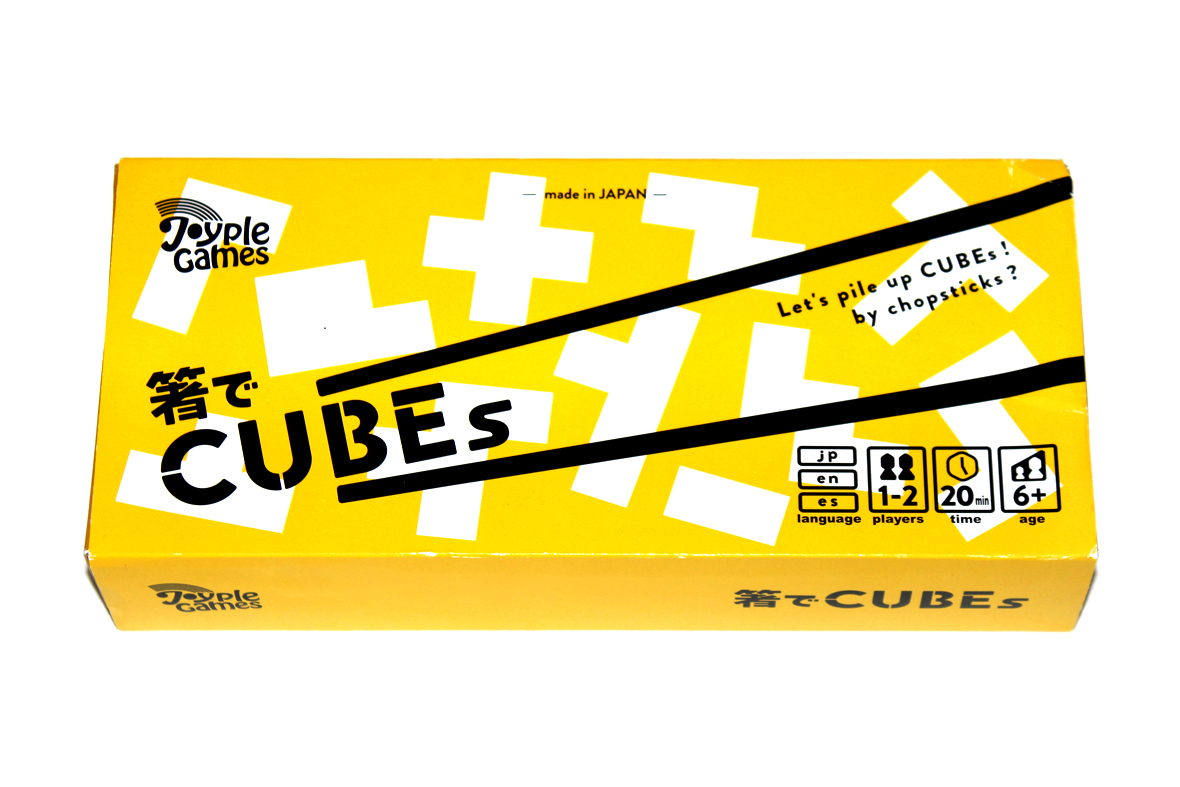 It’s always a good week when we have doujin games to review! It can also be a good week when that’s not the case, but it’s a lot less likely, I guess? I’m not sure, and now I have another thing to track with my sleep tracker. Anyways, before we get on to the next one, let’s stop for a second and check out Hashi de Cubes, a recent Tokyo Game Market release from Joyple Games.

There’s not really “lore” here in this one; it’s a bit abstract. You’re going to flip some blocks, stack some blocks, and helpfully put penalty blocks on your opponent’s block stack. Try to go wide, rather than tall; that’s just good efficiency. Knock yours over and you lose; knock your opponent’s over, and you still lose. Rough stuff. Oh, and you have to use chopsticks, not your hands. Which player will be able to triumph in this dexterity challenge?

Very little to do, here. Set out the blocks, then set the penalty blocks nearby: 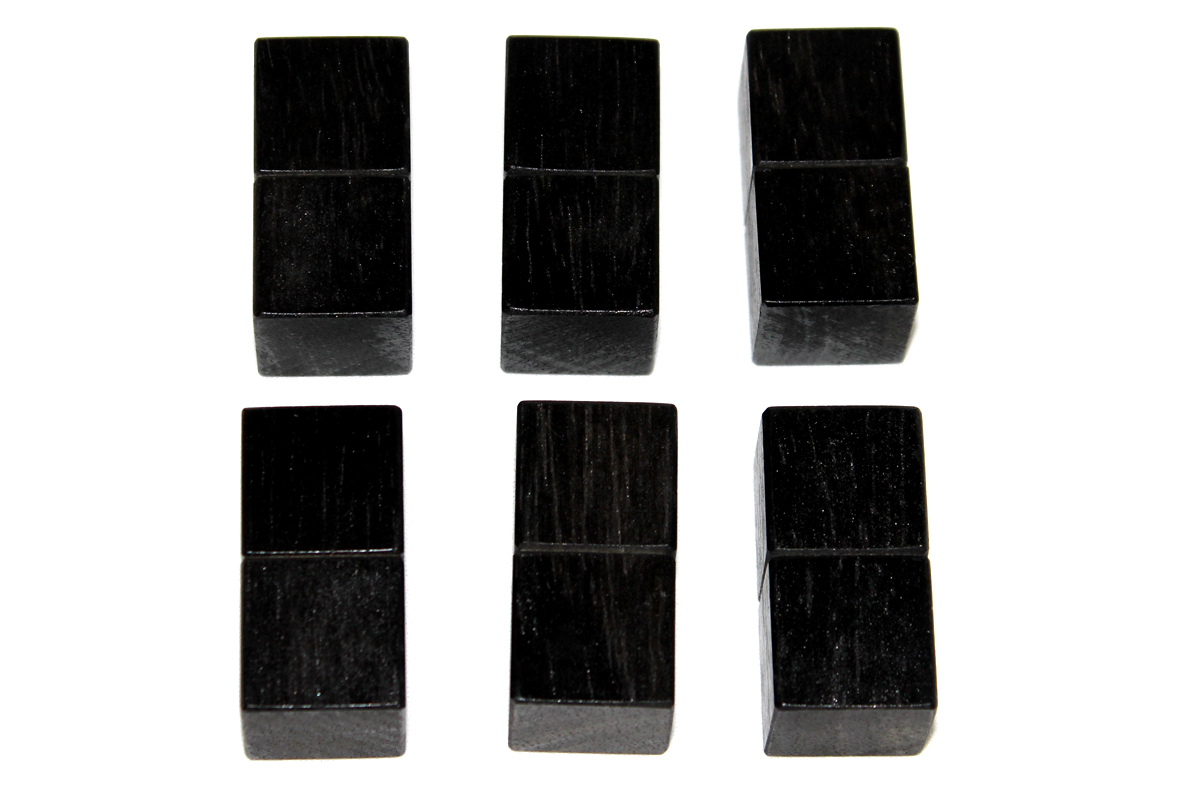 Give each player a starting play area: 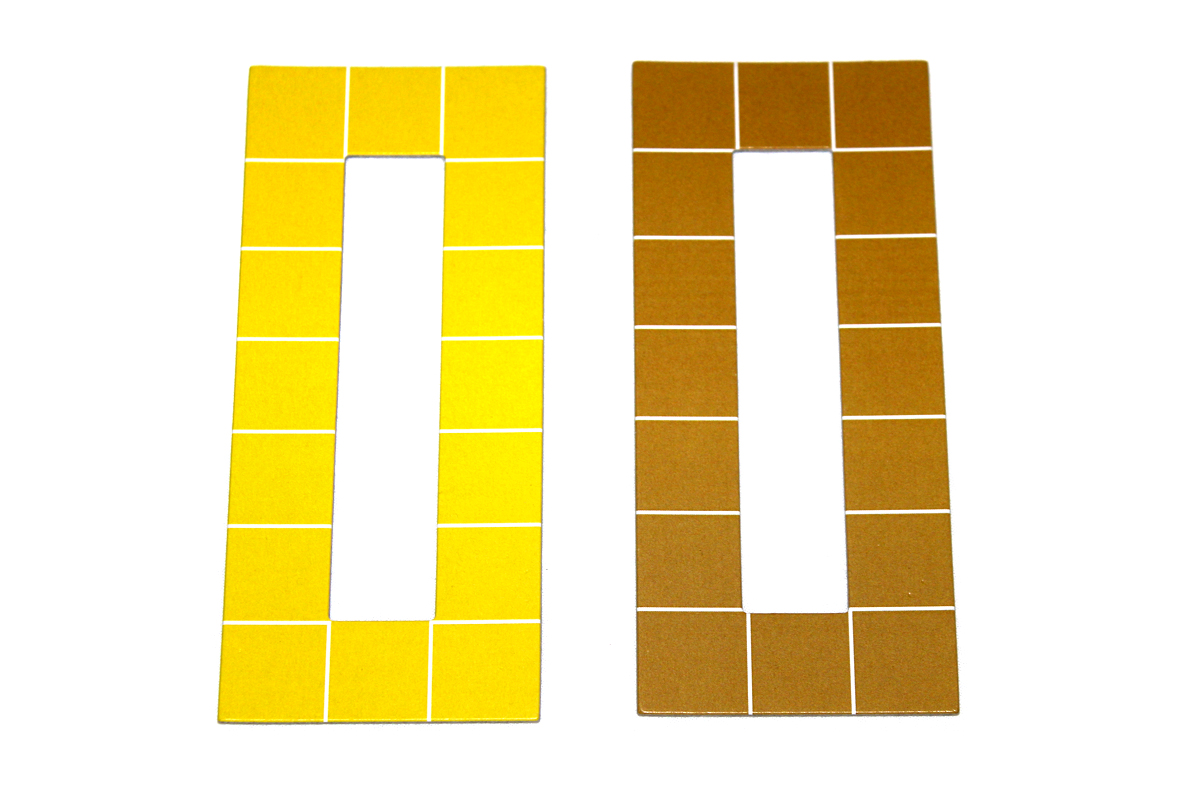 And a pair of chopsticks: 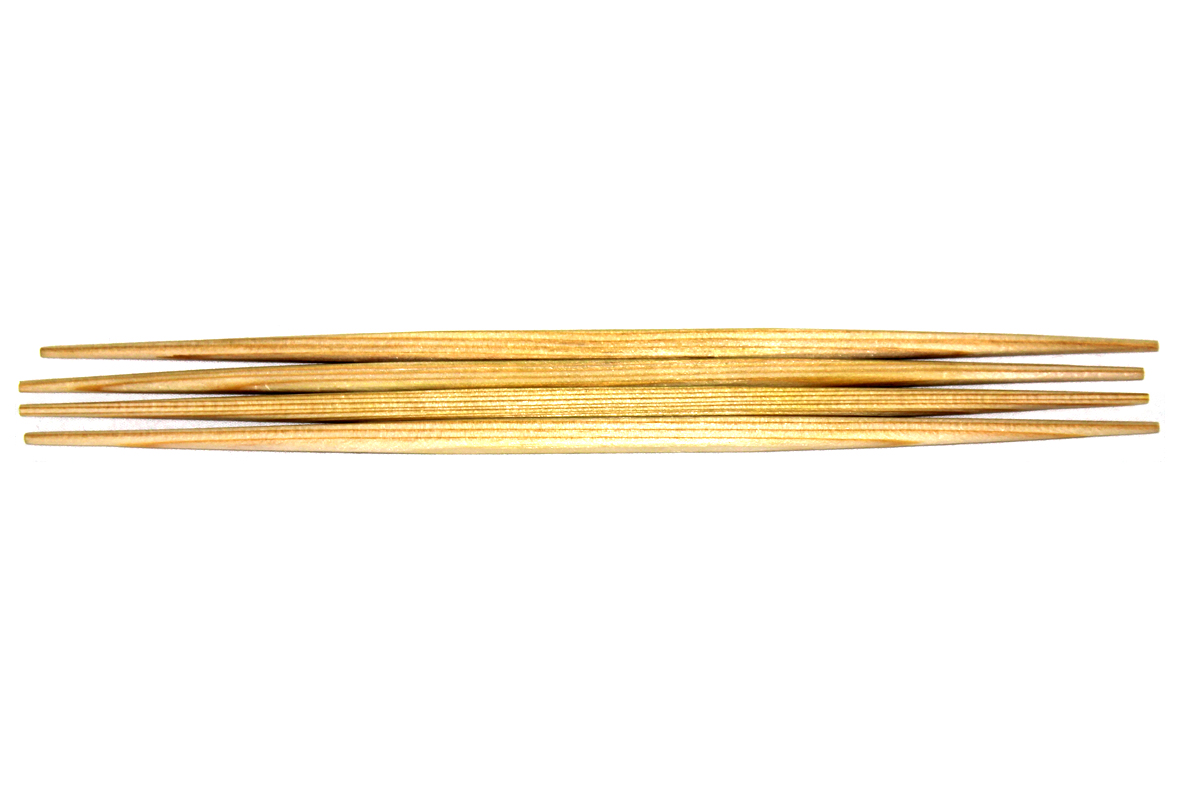 Finally, shuffle up the cards: 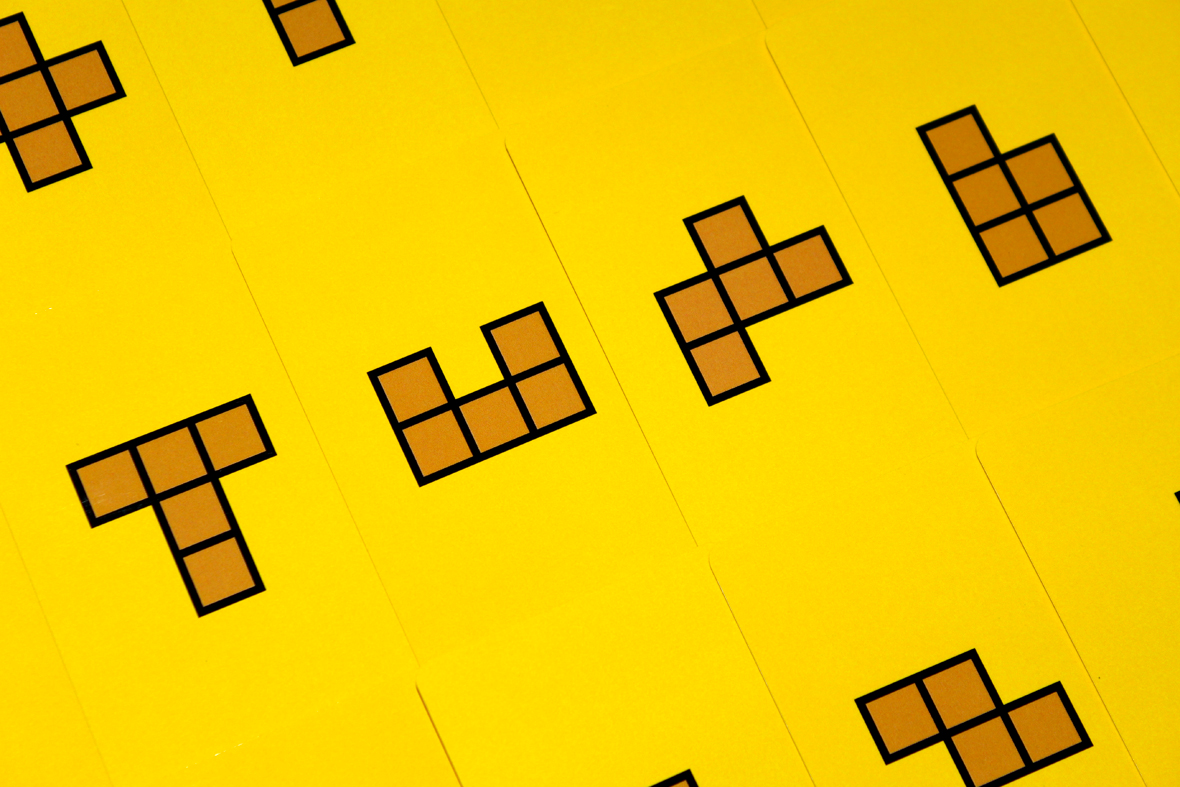 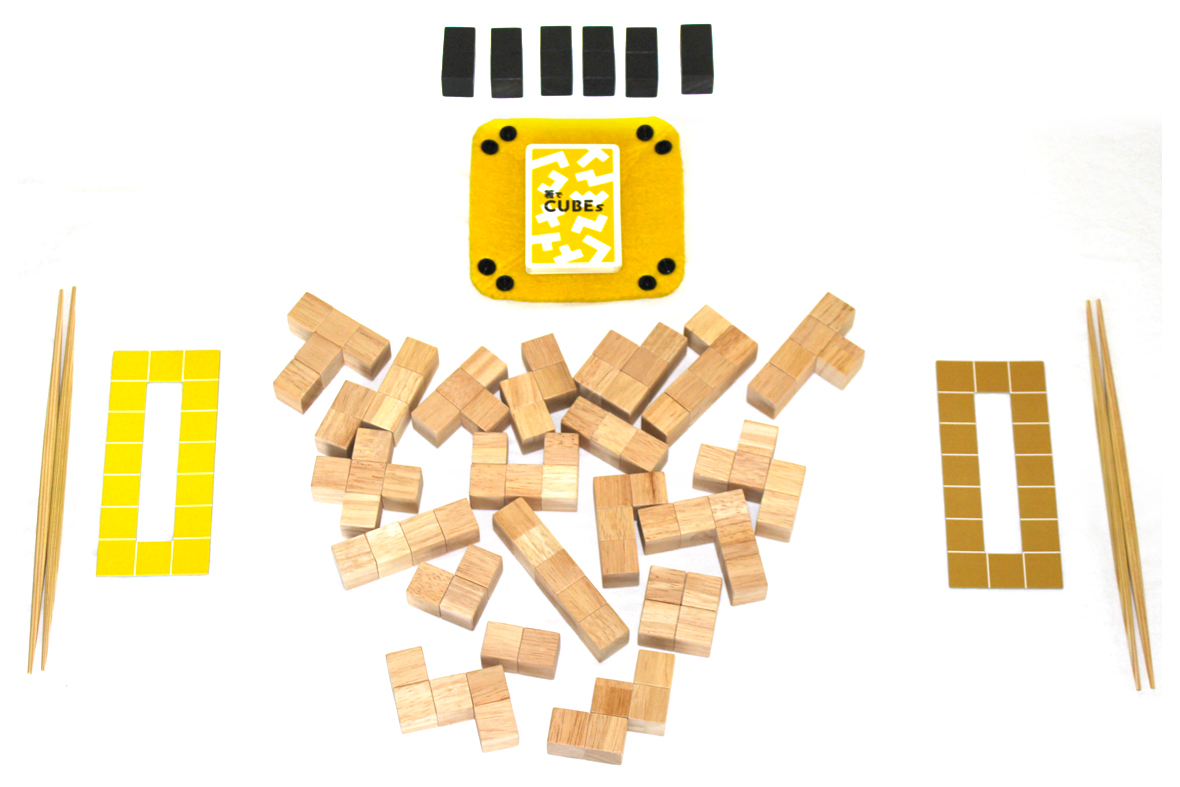 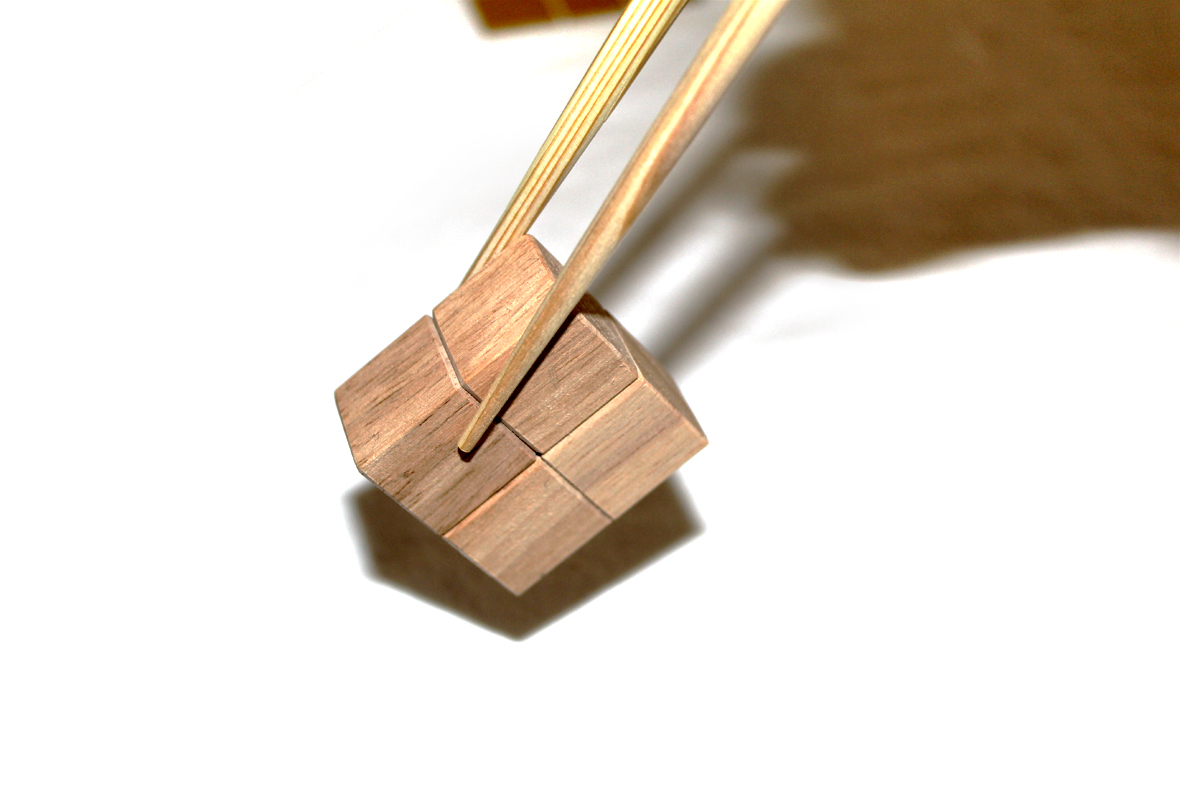 This one’s a hoot. And dead simple to explain. 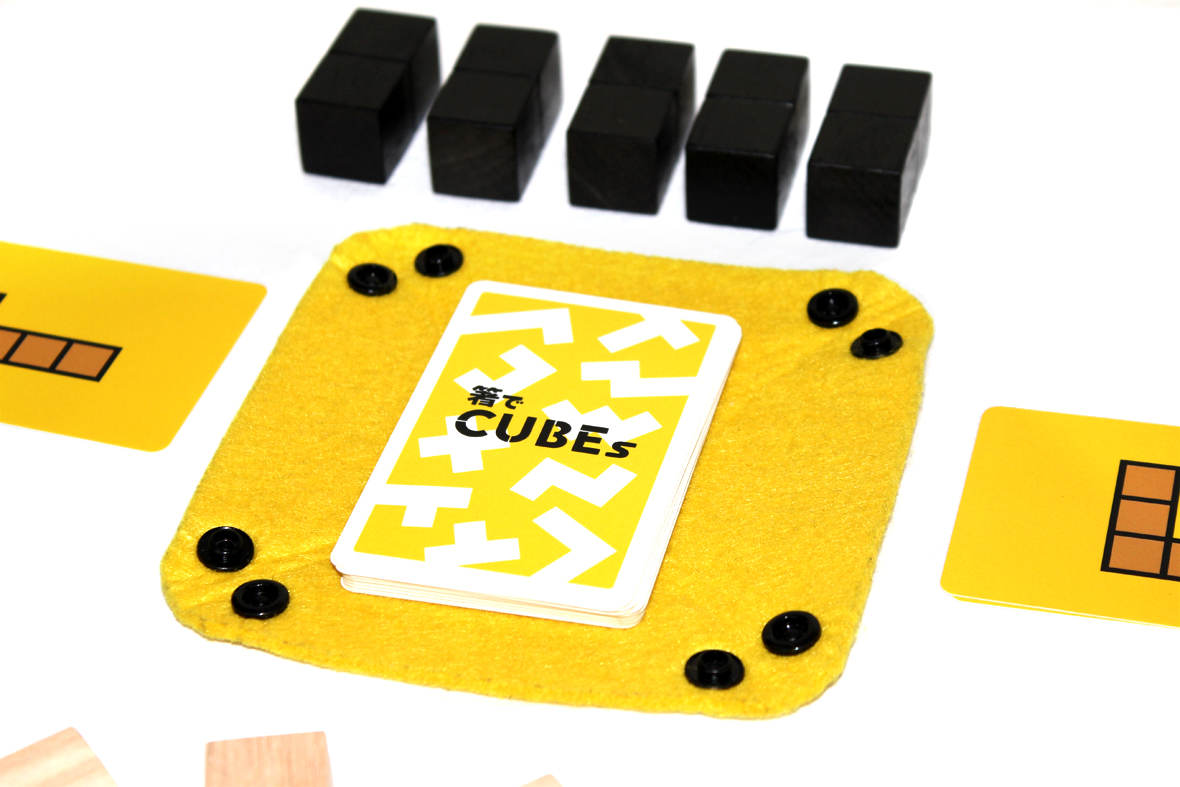 On your turn, flip a card. Using only the chopsticks, you must place the pictured block within the boundaries of your player area. Imagine building a wall. It may only be one block wide, but it may be up to 5 blocks long and as tall as you can make it. It cannot hang outside of those boundaries. 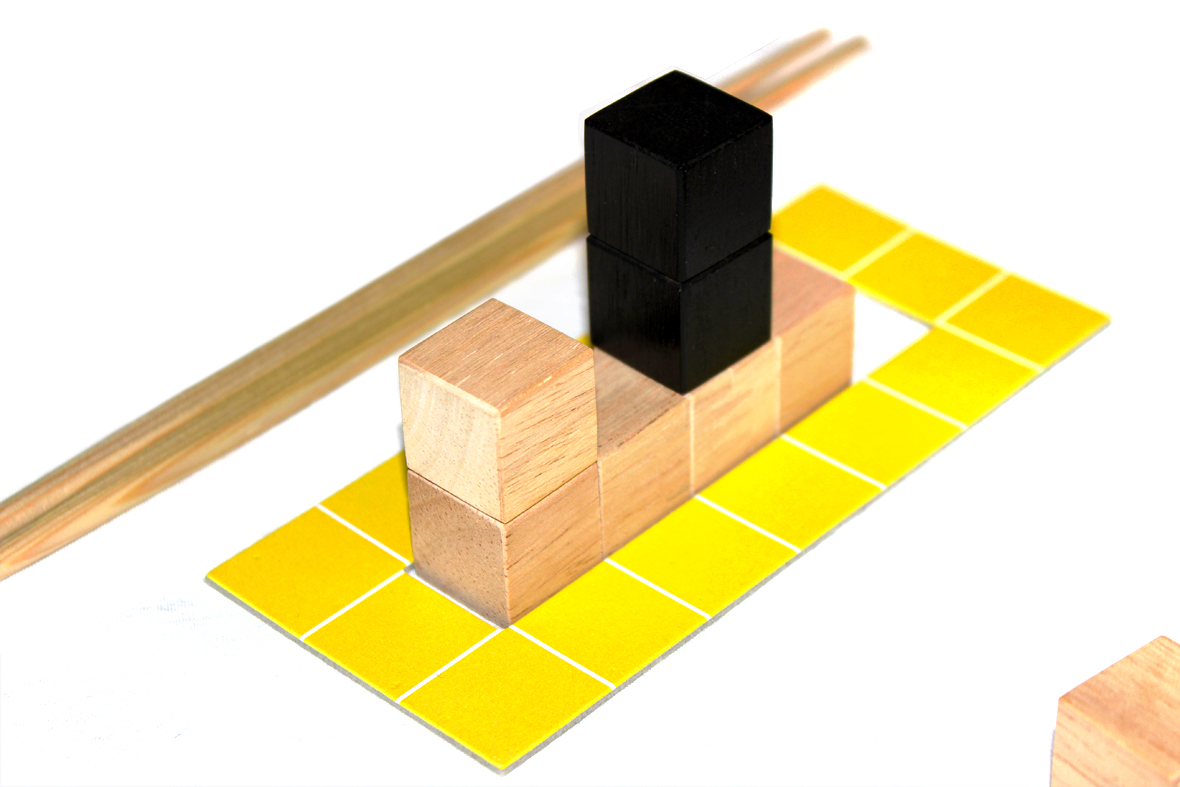 If you manage to complete a full row of blocks (Tetris-style), then you’ve managed to do something good! Well, good for you. Not for your opponent. This allows you to place a penalty block on their structure. Take one of the black blocks with your chopsticks and add it to your opponent’s structure wherever you want. Just be careful! If you’re sloppy and knock over their tower, you lose the game. You hate to see it. 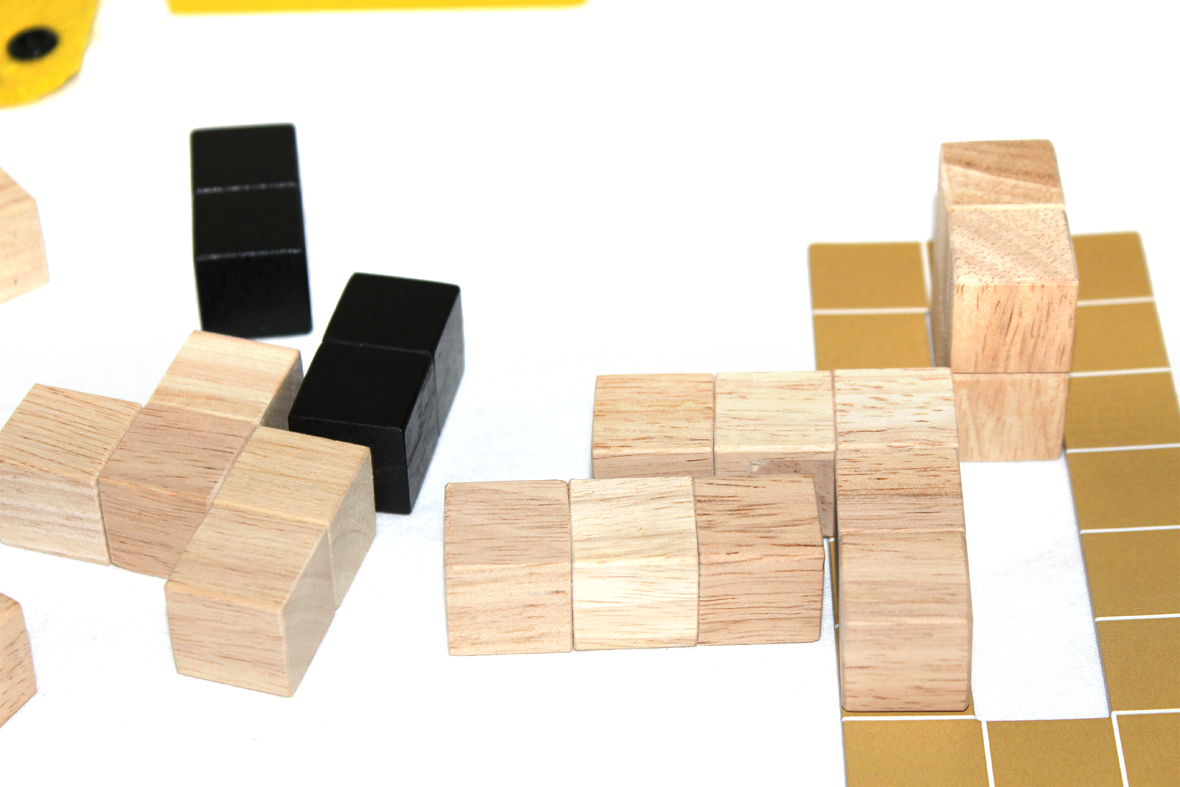 Speaking of losing, if you knock over your tower, you also lose! So don’t do that. Play continues until someone’s tower collapses, essentially. If you, out of pure spite and grit, manage to place every piece, well, the player with the shorter tower wins! It’s more efficient.

There’s a variant that lets you use your hands, but, if you don’t need to, why would you? Definitely not the point of this one.

None! It only plays two players. I have a lot of those. Made a whole tag for it. Do I use it consistently? Of course not. I mean, you can play it solo, but that’s mostly just seeing if you can stack everything without it falling over. 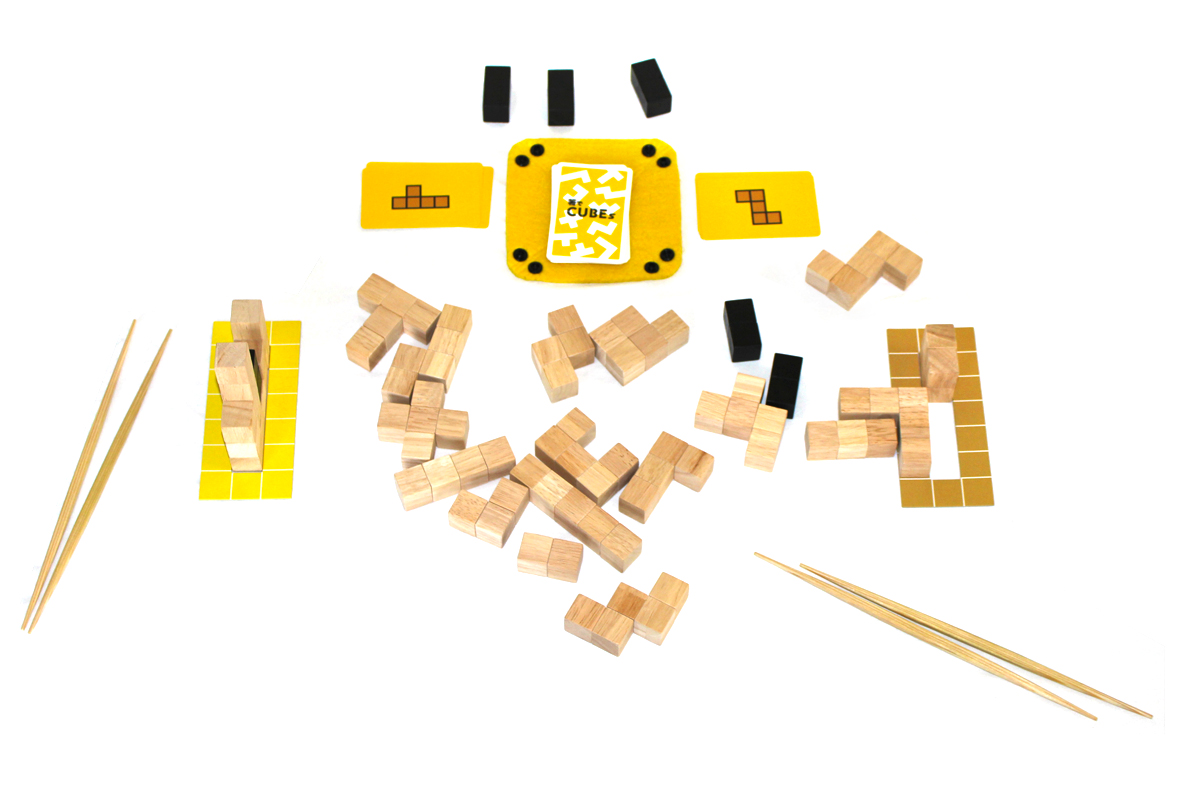 Overall, Hashi de Cubes is a cute little game! I think, at first, I wasn’t particularly pleased with it because my chopstick strength was so powerfully low (and my arms are normally pretty strong, so this was frustrating), but as I learned to navigate the game I started enjoying it a fair bit. Now I happily break it out when I want to play a two-player game that’s going to be extremely physically taxing and challenging, mostly for a good laugh. I’m a great friend. I have some concerns about the value of luck in this game, mostly because the cards you draw early are the foundational bits of your structure; getting nonoptimal starts makes it really hard for you to ensure long-term stability. Even then, though, drawing the wrong card at the wrong time can be an absolute disaster. And maybe that’s part of the fun, just, randomly getting the wrong card and likely losing the game, but the game isn’t quite short enough that I don’t feel somewhat invested. So that’s not the best thing, but, I think it’s workable for a short game. I’m kind of impressed at the level of physical dexterity required to do this well, though, I suppose a nontrivial portion of the American audience might be even worse with chopsticks than I am, so, make sure you stretch your hand muscles and drink water from time to time. Don’t stretch outside of your comfortable range. It is a lot of fun, though, and has some nice quirks, like the guide to put all the blocks away, or the penalty blocks coming in to potentially wreck another player’s grand design. If these things sound up your alley, I’d definitely recommend checking out Hashi de Cubes if you can get a chance to play it. I’ve had fun with it!