Full disclosure: A preview copy of Animal Inc. was provided by Nightdreamer. Some art, gameplay, or other aspects of the game may change between this preview and the fulfillment of the Kickstarter, should it fund, as this is a preview of a currently unreleased game. Also, while I don’t charge for Kickstarter previews, the publisher was charged a rush fee due to the tight timeline they needed the review completed in.

Alright, more Kickstarters this week! Two, in fact, between this and The Lost Worlds of Josh Kirby. I occasionally do the previews, so, you know, always interested. This one comes to us from Nightdreamer, which made Crossroll Hong Kong, a very interesting roll-and-write last year. I quite liked that one, and, of course, cute animal games are my jam, so naturally I was interested as soon as I heard about this one. Let’s see how it shakes out!

In Animal Inc., you’re trying to climb that corporate ladder. Or pyramid, really, if you think about it. Along the way you’re going to have to work a few jobs (and balance out your desire to nap) to really maximize your capital in that animal gig economy. But you’re not alone! Other players want to do the same thing, so you’re going to be working hard against them if you want things to turn out. You’re in the corporate jungle, now; will you be able to rise through the ranks?

Not a ton, surprisingly. Deal an equal number of cards to each player: 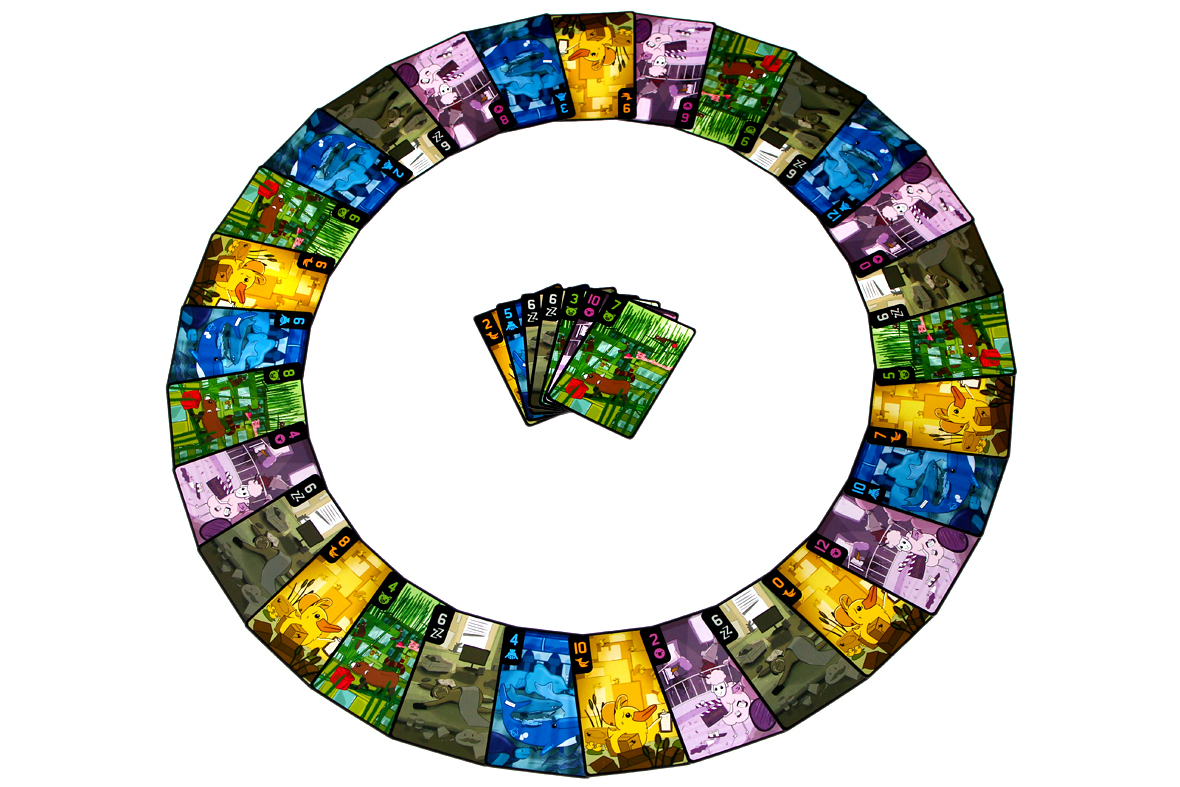 Each player then discards a certain number of cards, depending on the player count:

Set out the scoresheet, depending on your player count:

You should be good to start!

In certain rounds of the game, you’ll start the round by passing four cards to the player to your left, right, or directly across from you. Check the scoresheet for the particulars. Anyways, in this game, your goal is to build (or sabotage) a card pyramid! We’ll talk about how and how that scores. 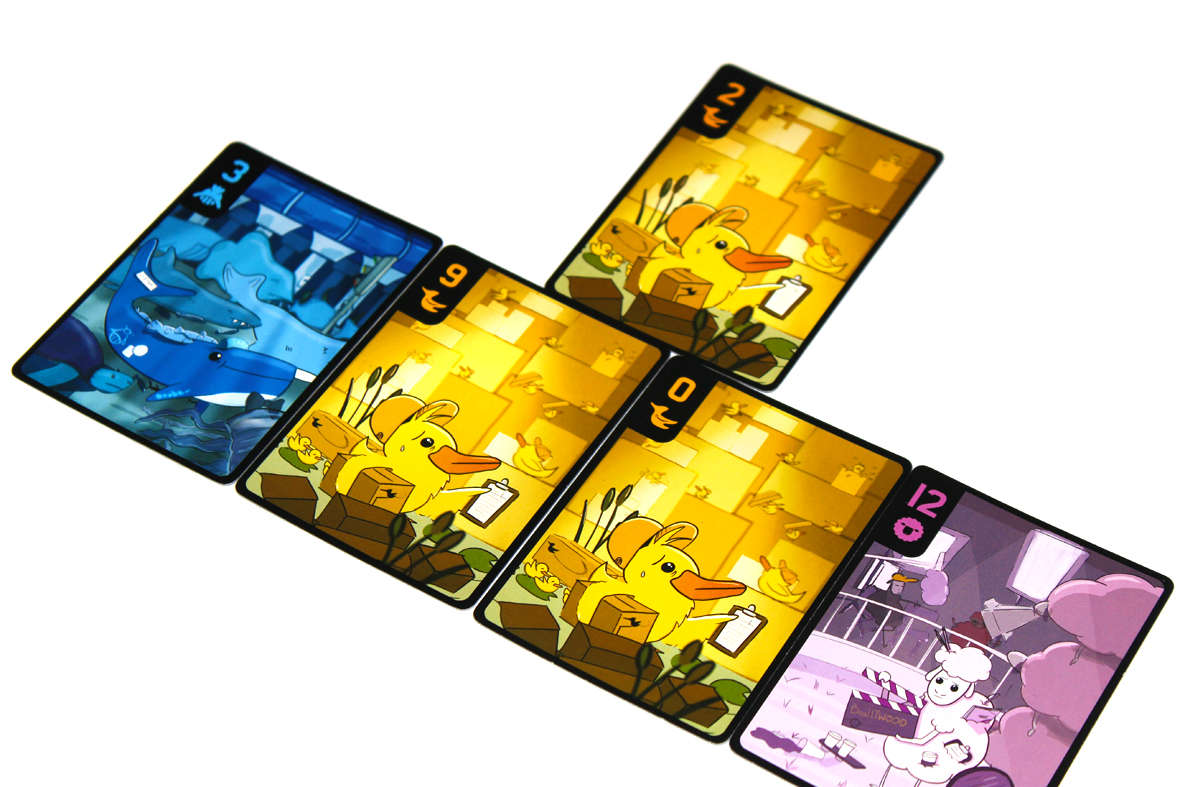 On your turn, you’ll simply play a card. That’s it. Add one card from your hand to either the left or right of the bottom row or play above two cards, forming that pyramid shape I was mentioning. Note that the bottom row can have 8 cards, maximum.

If you want to play above two cards, the card you play must be the same color as one card or the other. There are no restrictions on cards you can play in the bottom row; any card may be adjacent to any other. 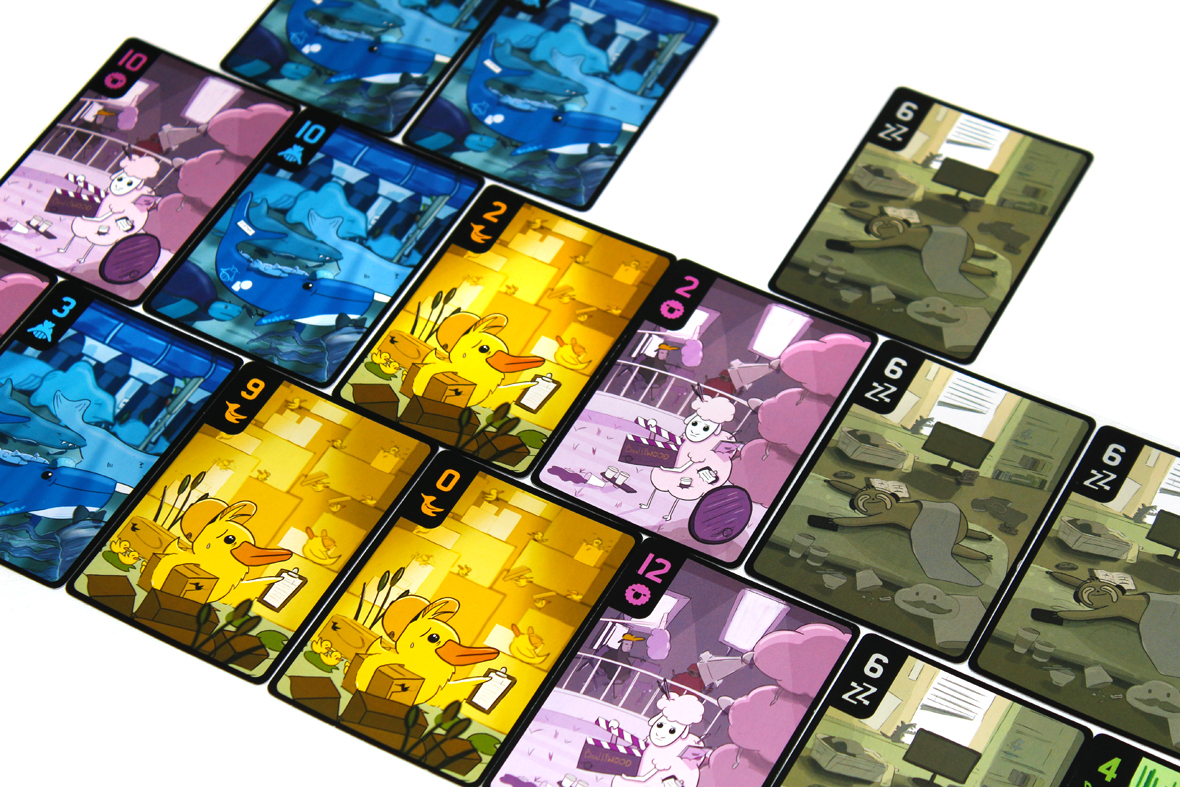 If you cannot play any other cards, you’re done for the round. Put the rest of your cards face-down and let people know you’re unable to play. Even if you are able to play in the future, you cannot. 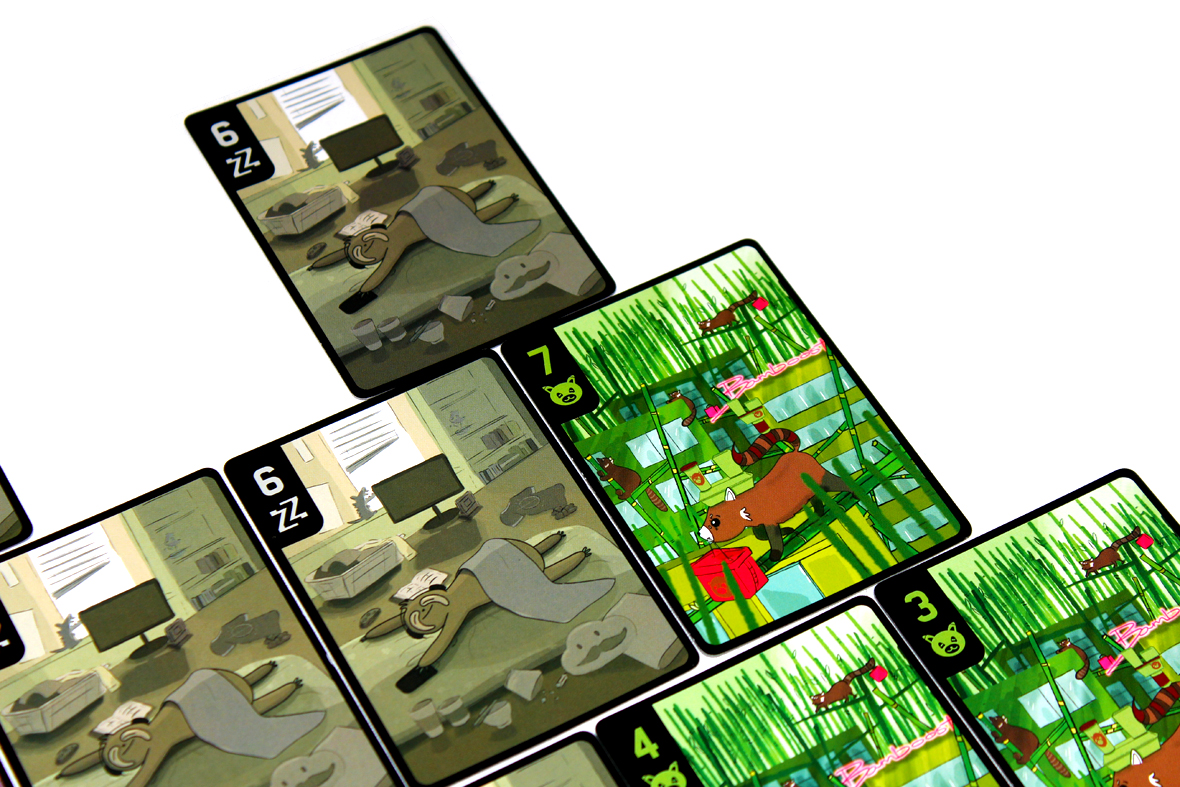 If the pyramid was not completed successfully, it’s been sabotaged! This causes a different scoring event:

Start another round! Note that the start player shifts every round (and the drafting direction, potentially). If confused, check the score sheet. Play until players agree that they’ve played enough rounds (the game recommends … a lot for various player counts), and the player with the most points wins!

Yeah, the sweet spot for this game is three players. At two, it’s just … a struggle, since you’re pretty much evenly matched. You’re going to be hard-pressed to stop your opponent from building the pyramid, which means the cards in your hand are a bit more important since you’ll want high cards when you build and low cards when your opponent builds. At four, it’s sort of the opposite effect; with three players working in concert against you (or even 2v2) it’s often quite challenging to get the pyramid built at all, so again, you’ll want to keep your hand in good shape, just the other way. Low cards when you build, high cards when someone else does. At three, though, it’s unbalanced; at any time, one player can change the outcome of the round by helping or hindering. And that’s interesting! It means that there’s a lot more room for subterfuge / backstabbing / trying to double- or triple-cross your opponents. It’s very sneaky! And I like that. Definitely would suggest playing at 3. 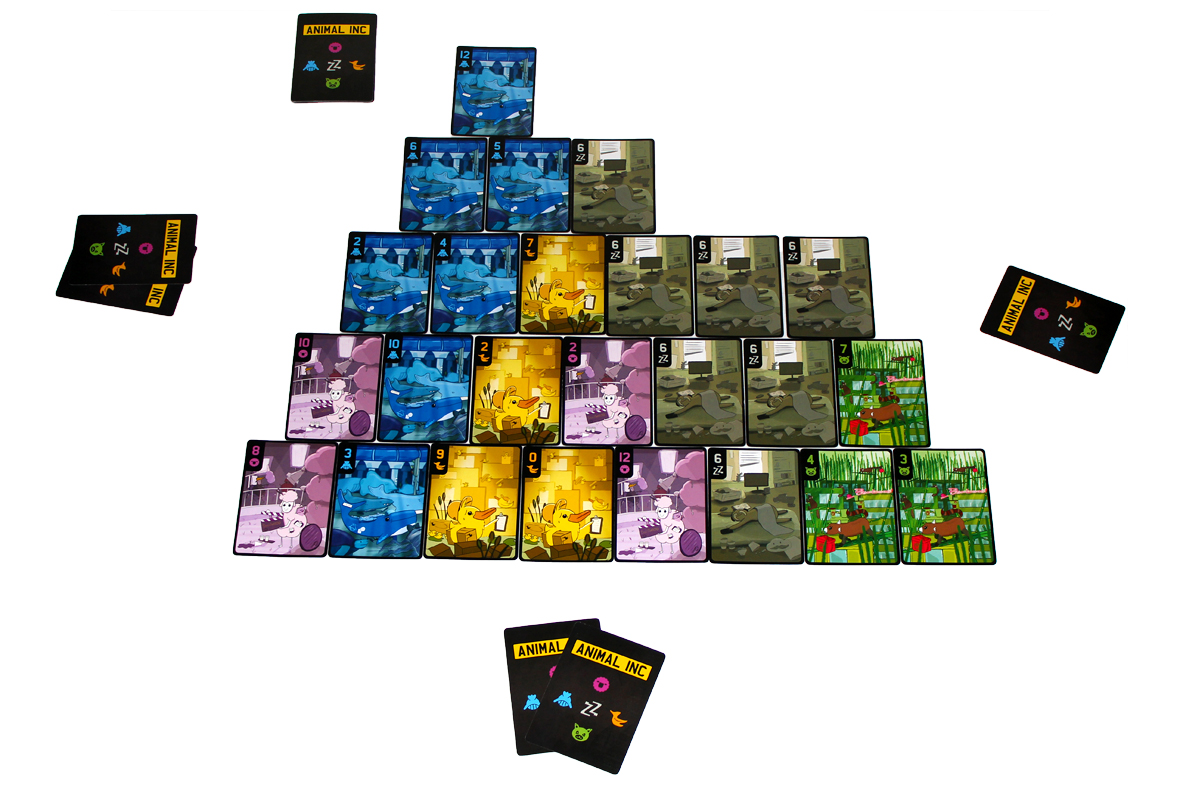 Overall, uh, Animal Inc. is one of the strangest games I’ve played. It’s dead simple, in concept, but holy heck is it complex when you sit down and play it. It takes a few rounds for players to even realize that the sabotaging they’ve been trying to do is insufficient to stop one player who’s been getting the high cards, and now they’ve got a breakaway lead? That’s terrible! Now you’ve got a game where backstabbing, self-sabotage, and deception start to emerge organically as players try to decide if it’s worth hurting themselves to devastate another person. Sometimes yes! Sometimes no! It’s complicated! I think I … like the game? But I’d be hard-pressed to think of a time I’d want to break this out except to watch players slowly erode their own sanity against each other. Maybe we overthought it? Not sure. My intense confusion aside, there are places and times it can speed up. My three-player rounds of it were much faster, but maybe we were playing with less analytical people? Hard to say. I think the potential for massive analysis paralysis being there with no incentive to speed up is a problem, though, since a lot of players will get caught in that trap. That said, if you can get players to move quickly and you like semi-cooperative games, there’s a lot of interesting stuff to do with a very low amount of rules complexity (the footprint of the game is large, but what can you do if you want to build a card pyramid?). If that sounds interesting to you, Animal Inc. launches on Kickstarter soon!