Full disclosure: A review copy of Welkin was provided by Luma Imports.

Alright, we’re back with another mini-review. I’m going to try to loop these in every so often; it’ll hopefully also give me the additional oomph I need to review titles that I’ve been trying to get to for years, like The Legend of Korra: Pro-Bending Arena, Spirit Island, and who knows what else. We’ll see how that shakes out. In the meantime, though, we’ve got Welkin, another game from Ankara, who brought us the delightful Draftosaurus. Let’s crack into this one and see what’s going on with it.

In Welkin, you’re taking on the role of architects who have gotten a bit more … lofty with their ambitions. You’re a celestial builder, now, and your goal is to try and earn your keep by building homes and buildings that keep with market trends. But those trends are fickle and houses take a while to build, so you may end up with a worthless property if you’re not too careful. But, maybe if you wait a bit longer, it’ll be seen for the treasure you know it is. That’s real estate! At least, that’s what people tell me. I live near San Francisco and the prices have never dropped. Manipulate the central market to determine resource value, and then build houses out of those resources to earn money and one-time use abilities! At the end of the game, the player with the most money wins! Do you have what it takes to build these homes in the sky? Or will your ambitions come crashing down to Earth?

So, similar to Dadaocheng, which, also reviewing this week, this game relies a lot on a shared resource that can be manipulated, dropped, flipped, and reversed by other players. That’s sometimes good for you, if you end up grabbing the same houses that other players want to build, resource-wise. You can ride that wave. At higher player counts, though, if you err and take unpopular houses (statistically, there have to be some), you’re going to get a lot of dead weight as players devalue the resources that you need for construction. That’s difficult to fix, since they get up to three turns to your one, which might be unsatisfying as you have to eat the loss. The market can change quickly, which might also be to your disadvantage. As a result, I tend to prefer the game at lower player counts, since there’s less aggressive market manipulation and I feel like I’ve got a better grasp of it. At two, you have equal share of the market and I feel like there’s a lot there that works for me (or, at least, works for me more than at four players); that’s too chaotic for my tastes. 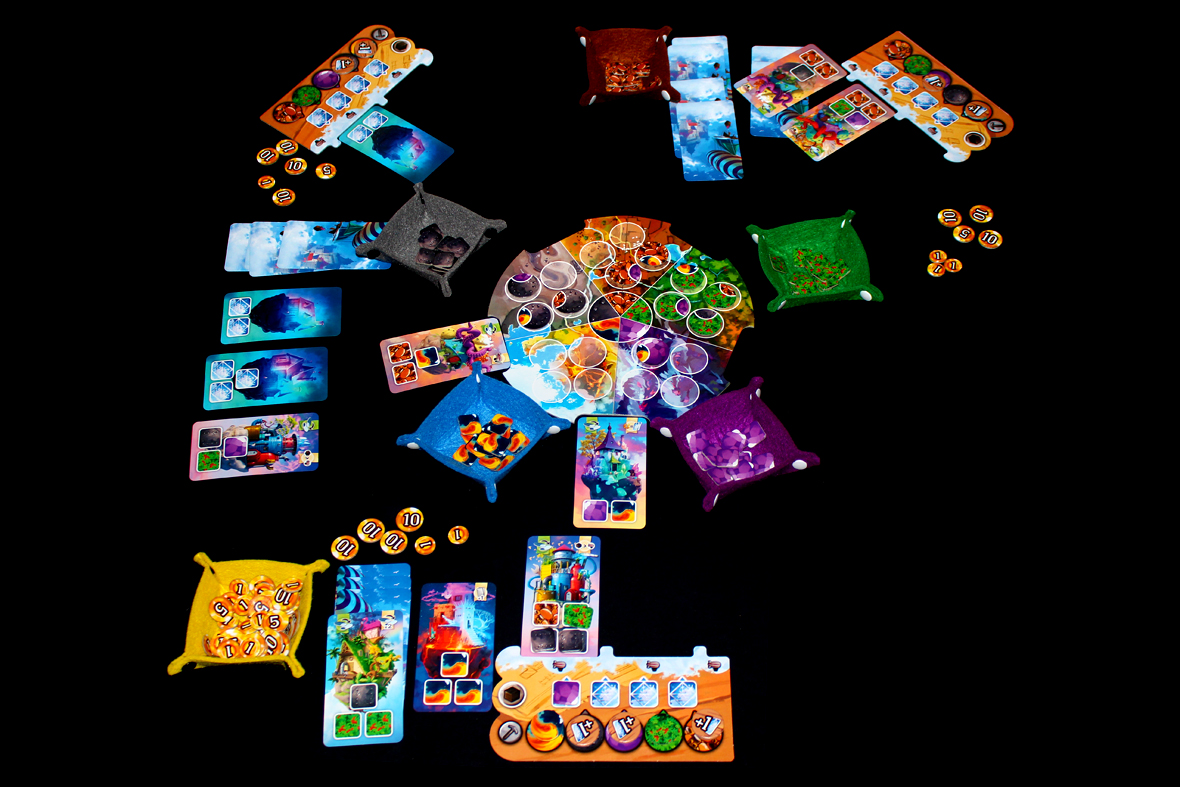 Overall, I think Welkin is decently fun. For me, a lot of the interesting part of the game is the art; I really like the bright colors. The variable market is interesting, but I prefer games where it’s a bit less chaotic, like Inner Compass; in that one, you merely devalue the thing you just purchased, rather than openly manipulate the values of various market elements. In this version, it can come across as take-that-esque, which isn’t my favorite element. Additionally, it makes the market extremely chaotic at four players. Two is definitely, in my opinion, is a lot less volatile. My problem is, even thinking of games with variable markets, there are just games I like better than Welkin. That’s not to say that it’s a bad game by any measure; there are just lots of games. Where it succeeds is again, great art, and a relatively low rules overhead. You literally just pull a card, get some resources, and then get that as money. I will say that its best mechanic is, in my opinion, the way you get resources; that flip-one-gain-from-the-unflipped is a really clever mechanic, and I’d love to see how it can be used in other games. If you’re looking for a casual title, though, and you really like bright, colorful games, you may enjoy checking Welkin out!