Full disclosure: A review copy of Visitor in Blackwood Grove was provided by Resonym.

Yeah, I’m still making my way through a pretty nontrivial Gen Con Backlog before … con season starts up again in like, three weeks. I’ve resigned myself to the idea that this is going to be like this forever, probably, and that’s fine. There are many games still to be talked about, and we’re already knee-deep in Spring releases, but you didn’t come to this review to read me complain, so let’s move on. One publisher I visited at Gen Con was Resonym, who published Mechanica, one of my favorite-themed games last year. They’ve published several titles, one of which we’re looking at today: Visitor in Blackwood Grove. Let’s crack it open and see how it plays.

In Visitor in Blackwood Grove, you play as one of three factions: a mysterious Visitor from worlds unknown, who has crash-landed here and needs help to escape; a precocious Kid, who can team up with the Visitor and help them get off-world if they can figure out a way through the forcefield; and some government suits, a collection of Agents that wish to keep the ship and dissect the Visitor for further study. Thankfully, that forcefield is keeping everyone out, but it’s only a matter of time before someone figures out a way through it. They’ll notice that the Visitor created the field and allows certain objects in, so perhaps there’s a pattern to it? Only one way to find out. The Visitor will give some clues as well to the Kid, but they don’t quite trust the Kid enough yet to obfuscated their hints from the Agents, which might be bad. Only one side is going to win this competition; will it be yours? 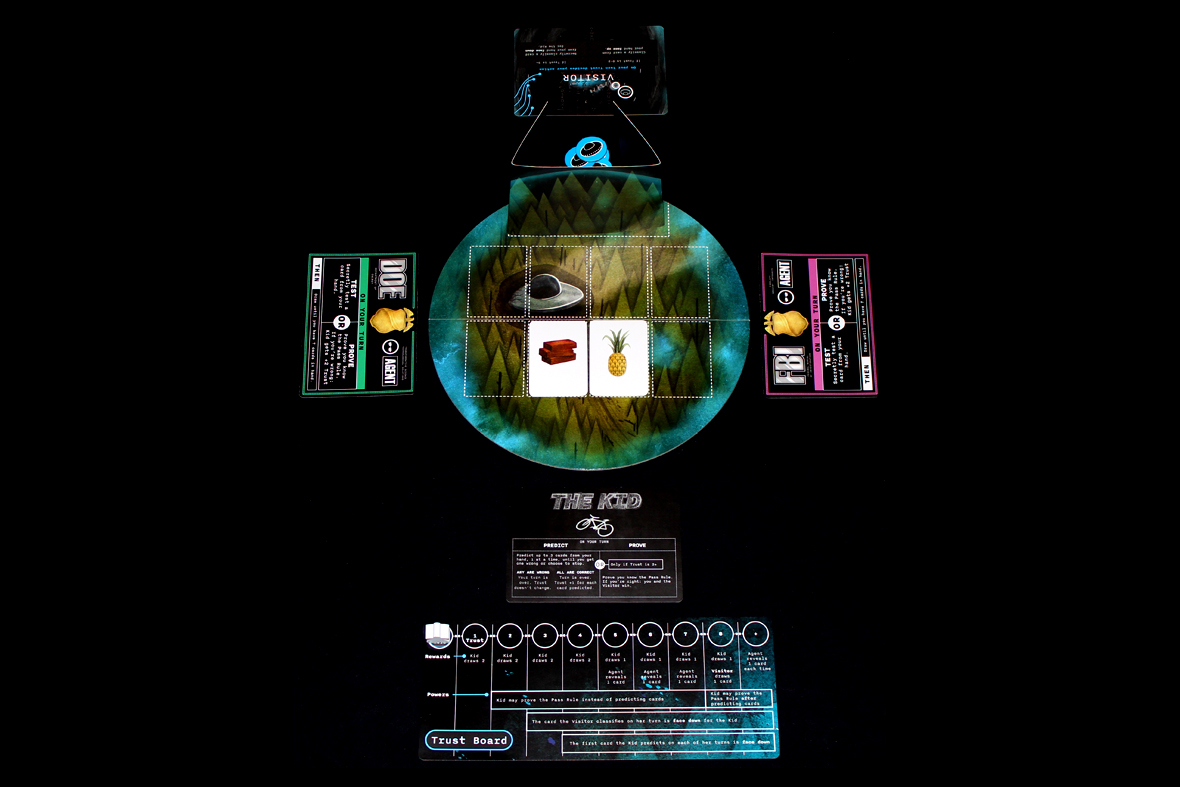 Not much to report on this front, surprisingly. More players yields more Agents, which isn’t necessarily good for the Visitor, but it might not be bad, either. The game moves a bit slower, sure, but the Agents each can individually win by guessing the rule (Proving it) or as a group by waiting for the Visitor to run out of cards. So having more of them doesn’t really help or hinder them; they have no incentive to share information. They can, however, if they try to Prove and fail, buff up the Kid’s trust with the Visitor, so be careful if you’re an Agent. Beyond that and the slight increase to playtime, though, I haven’t noticed any big differences. I’d play it at three or six players with basically no issue.

Overall, I think Visitor in Blackwood Grove is a solid title! I’m hesitant to call it a party game, honestly, since it’s a weird some vs. some style of a game, but it can support up to what, six players? That’s mostly a party. I’m not convinced I’d do that (lots more downtime), but again, I’m a board game review, not a cop. The thing I appreciate about this game is that it has similar Word Association Games vibe as like, Codenames, but it’s one player who decides the association before the game starts. That gives them a lot of power, sure, but then they have to do all the work verifying other players’ guesses. Personally, I think that’s fun. It gives me a lot of room to make up stupid rules like “things you could knock down a tree with” or “things I could probably eat if I were really determined” or “things I can easily fit inside” (car, yes, tree, no). It’s mostly just me memeing on my friends. This is partially why I recommend not sharing your rule after the game; it leads to a lot of unproductive arguments. It’s basically the “is a hot dog a sandwich” argument all over again. If that sort of validation isn’t your thing, though, you can play the deduction route or the deduction + press-your-luck route, which gives the various players some asymmetry to their roles. I find that most people enjoy one role or another after a play, so it settles into a pattern (or you can rotate, if you like that sort of thing). Either way, I find that to be a pretty enjoyable time, and the game’s very quick, once you get used to it. If you like trying to deduce those associations, or you, like the sphinx, enjoy exceedingly cryptic riddles and are a bit of a jerk, you’ll probably enjoy Visitor in Blackwood Grove! I certainly have.