Full disclosure: A review copy of Cat Rescue was provided by Chronicle Books.

Look at me, up to writing one review every two weeks, now. That’s … not sustainable, in the slightest, but it’s something. It’s mostly solo games and games I can instrument by playing by myself, but we won’t talk about that right now. What we will talk about is the second edition of a game I really enjoyed almost 500 reviews ago, Cat Rescue. One of the many titles from Sunrise Tornado, Cat Rescue featured quick, puzzley gameplay and great art for an overall great experience. Chronicle Books has since picked it up and repackaged it to publish, so let’s see what’s new!

In Cat Rescue, you play as shelter employees working to get as many cats as possible off the streets and into their forever homes with families that will love and care for them. Delightful. However, your shelter is smaller than you’d like, so you can’t always take every cat. You don’t want to overwhelm the Foster Homes either, so you’ll have to think on your feet if you want to prevent a disaster in this cooperative game. Will you be able to avoid a cat-aclysm?

Pretty much none; always a fan of that. Set out the playmat: 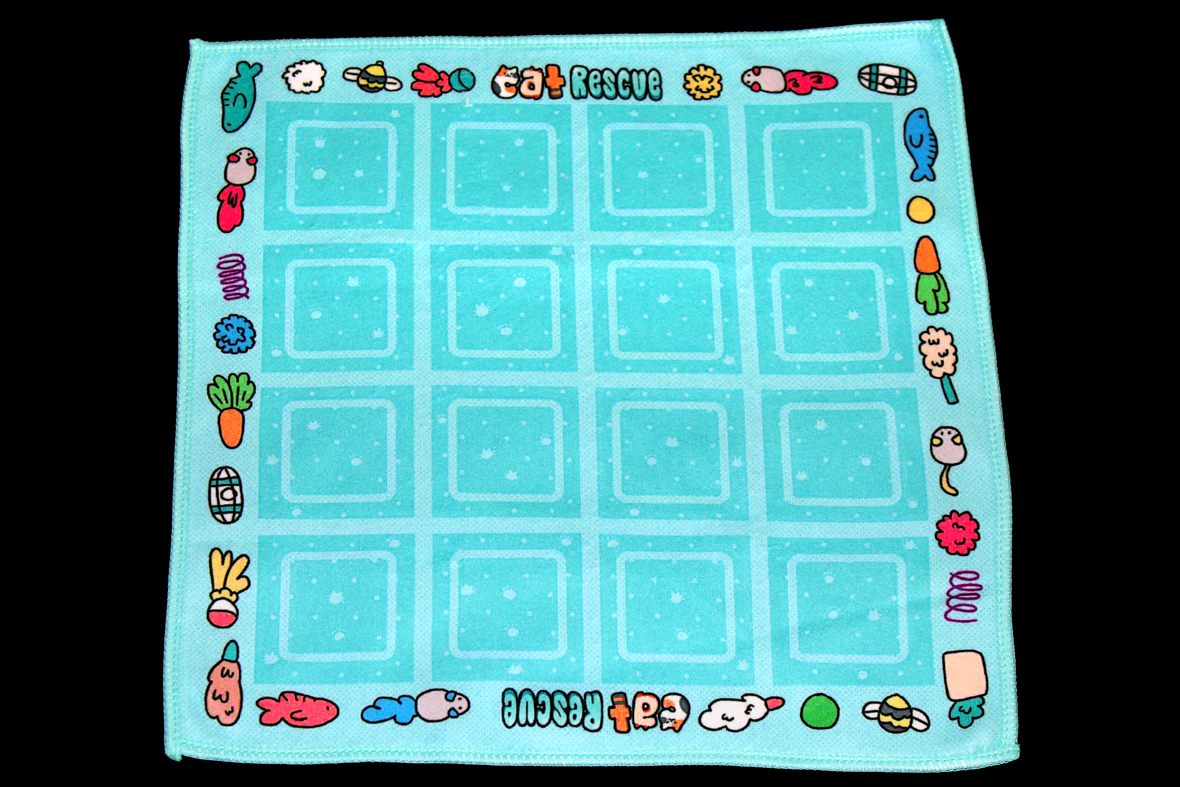 Shuffle the cards. Deal each player two, and then reveal four face-up in the center of the playmat: 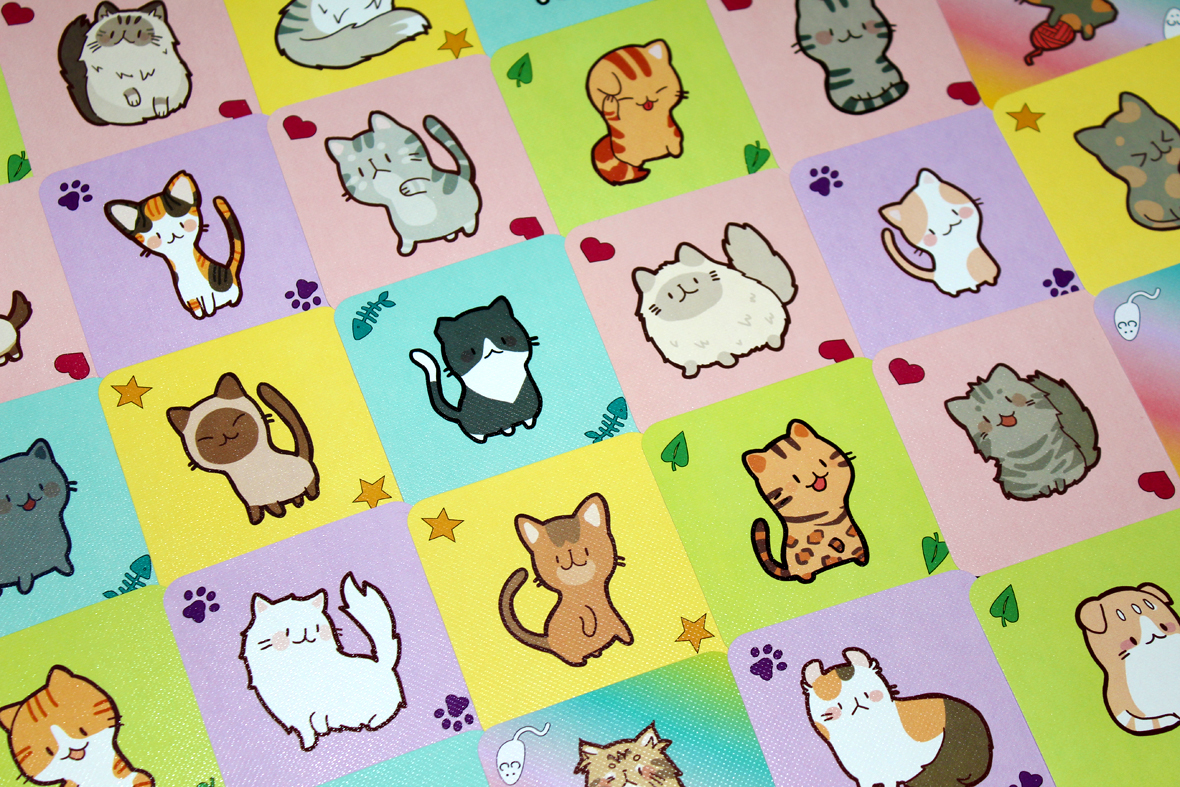 Place the Delivery Token on the bottom-right card, pointing towards the left, Street side face-up:

Finally, if you’re playing with the advanced variant, set aside the Power Tokens:

Finish up by converting the box into the cats’ Forever Home: 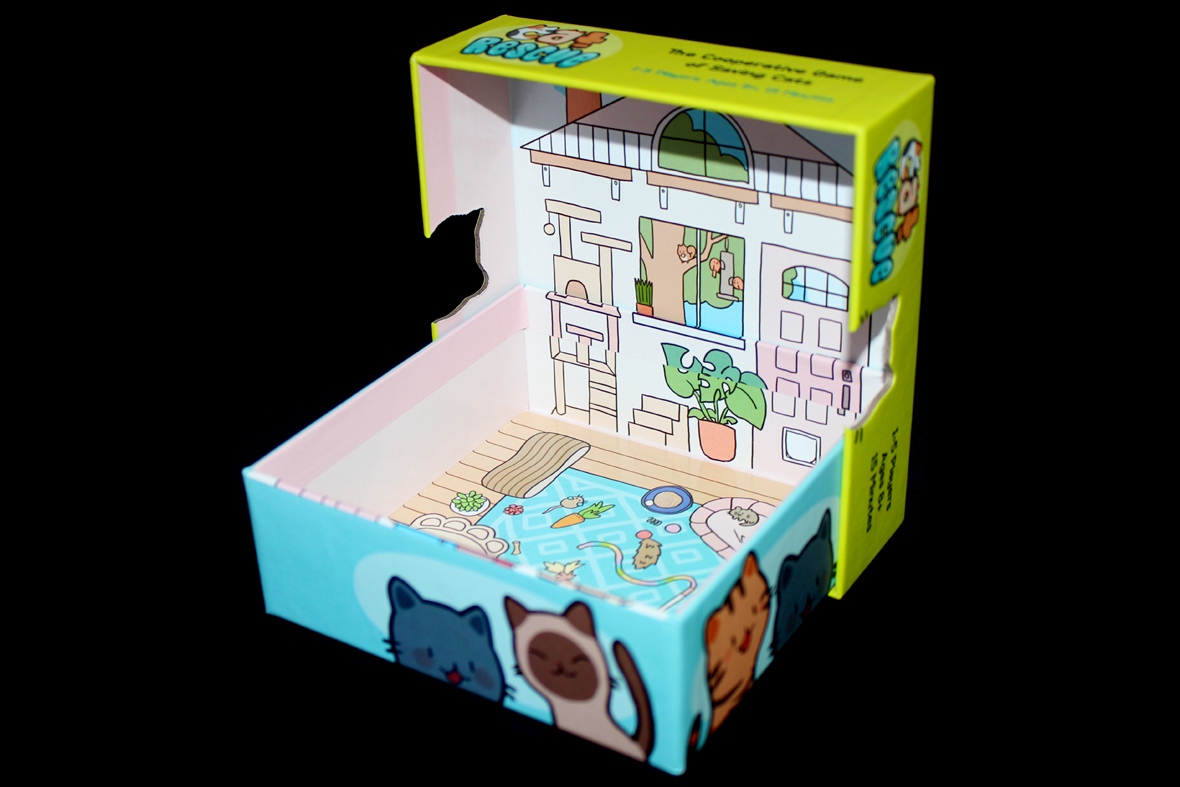 Either way, you’re ready to start!

The core game hasn’t changed much since my preview, a while back, but it bears repeating because it’s a second edition!

In Cat Rescue, your goal is to push cats from the Shelter into their Forever Homes, while occasionally fostering them along the way. It’s a beautiful concept. There are six types of cats: 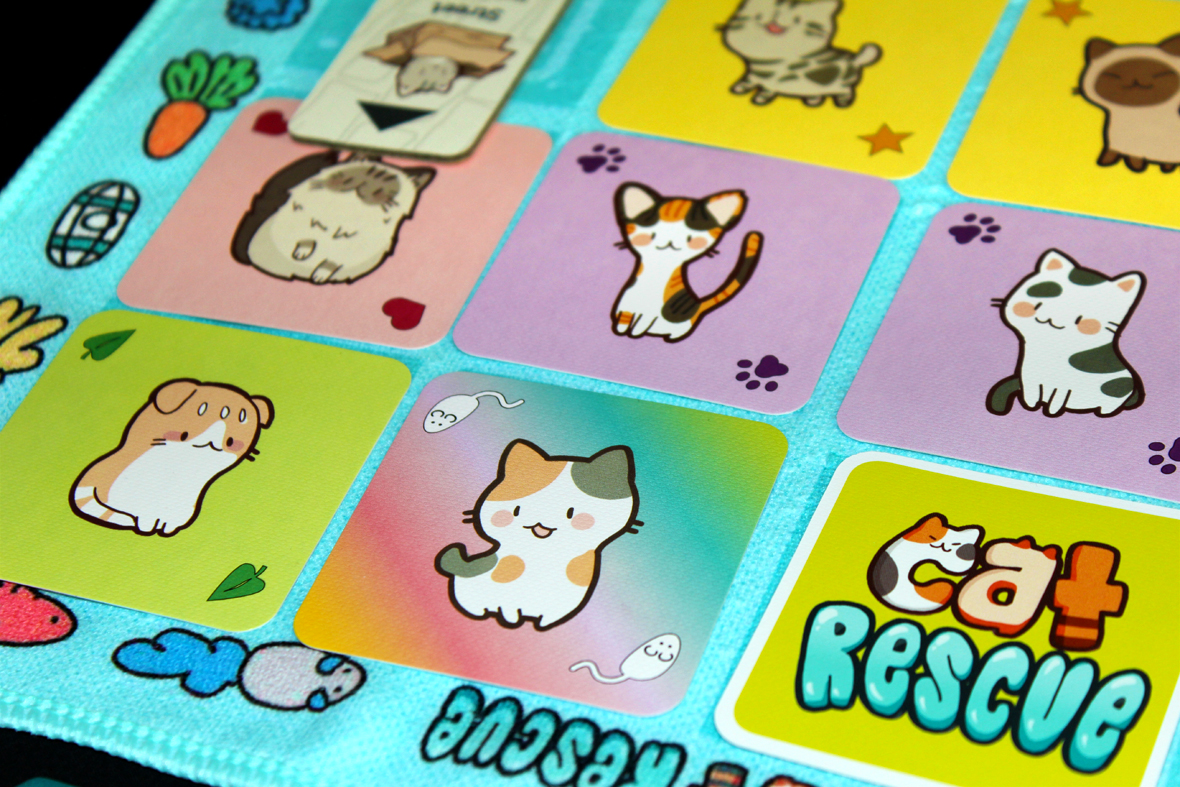 On your turn, you’re going to add a cat to the grid by placing it adjacent to any cat on the grid (even if it’s outside the grid; it’ll work) and then shifting the row or column in the direction of your choice. Once you do that, place the Delivery Token on the cat you just added pointing in the direction you just pushed. As with most placement, there are a few caveats:

Once you push the cards, leave them in place until you’ve resolved the push, even if you’ve pushed cards off of the playmat. If you’ve created a line of 3 or 4 Cat Cards of the same color (including Wild Cards), you must flip the 1 or 2 cards in the center face-down. Those cards are now considered adoptable. In the event of a weird T-or-L shape, you can choose which cat you want to flip face-down.

After resolving adoption stuff, check if any cards are currently off the playmat. If they are, they’ll go one of two places:

You get to place one cat, and then play passes to the next player.

The game ends in one of two ways: 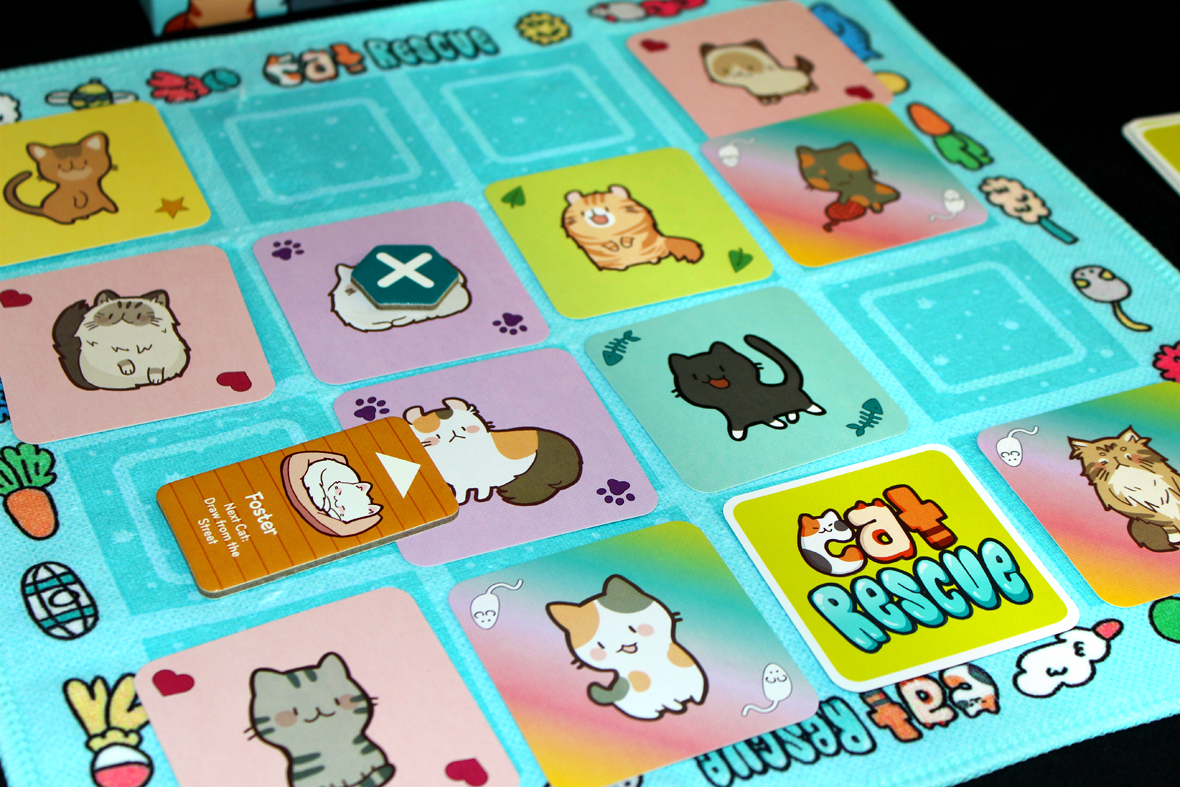 Once that happens, the game’s over! Count your points:

If you’re ready to add some complexity to the game, you can add new abilities! There are five additional tokens that you can use, on your turn, to add an ability to the cat you just placed. The abilities vary, from swapping cats to ignoring the Delivery Token to pulling cats instead of pushing them; try to figure out how you can best use them to increase your score!

Tokens played on cats stay with them for the rest of the game, even if they get Fostered or Adopted. Tokens in the Forever Home are worth 1 additional point at the end of the game!

This one in particular has not really changed since the preview. As I said then, as player count increases, you’re going to start with more cards out of play (and you can’t play them easily, since you have to alternate Street / Foster / Street, and so on). This makes it challenging to get cards out of your hand. And even when you do, then you’re in a different bad way: if you draw the final card, the game ends. If you can avoid that by playing cards from your Foster Home (if you’re allowed to do so) then you can more efficiently use the cards that you have. That’s a tough needle to thread, but lower player counts have their own challenges, as well. At lower player counts, you can’t see most of the cards. You’re gonna need a wild or two to really get those points to increase, so, if you can’t find them quickly, you’re going to be in a world of hurt. I don’t really have a strong player count preference, but I will say that I gently prefer it at lower player counts. It’s a bit more random, but it makes for a particularly great solo game (and the theme is so delightful).

A fair chunk of this is me going back to my previous Pros / Mehs / Cons and seeing what changed between that preview and this new edition. A lot did! 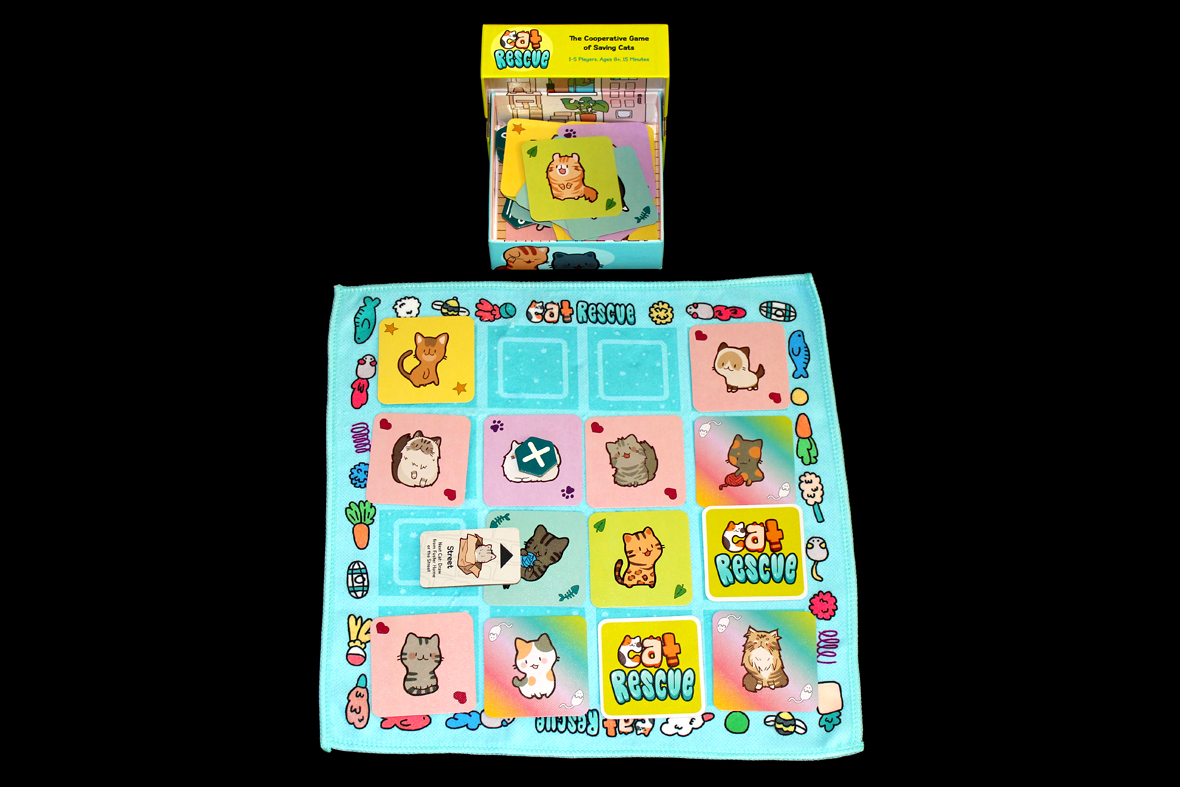 Overall, I think that the newest incarnation of Cat Rescue is a really nice production! Generally when you’ve got something like a second edition, you want it to be some kind of upgrade over the original (like Dominion getting rid of a lot of, uh, how to put this gently, uh, “under-used cards”). This does a nice job of streamlining the many different versions and expansions from the original Kickstarter and repackaging it all into a great (and still portable!) version. It even has me feeling positively about square cards, which is a rarity in the board game scene. I think that the major win for this version is the playmat. It makes the cards easy to pick up, it locks the structure of the board down so that it’s easy to see what goes where, and it just looks great. It’s a nice bit of color contrast to the cards, so the whole thing pops. I’d say if I had one problem with the game it’s that I wish it had more of a scalable difficulty level; it seems a bit easy at the moment. But for puzzle games that’s generally fine? I mean, you don’t worry about whether or not you’re going to be able to solve the Sudoku; you just kind of solve the Sudoku. It might take longer. Who knows. Maybe we’ll see some bonus content some day; I certainly don’t know. Either way, if you’re looking for a delightful puzzle title for the whole family, you’re a big cat person, or you just like games with great art, I think the latest edition of Cat Rescue is a delight, and I’d definitely recommend it!