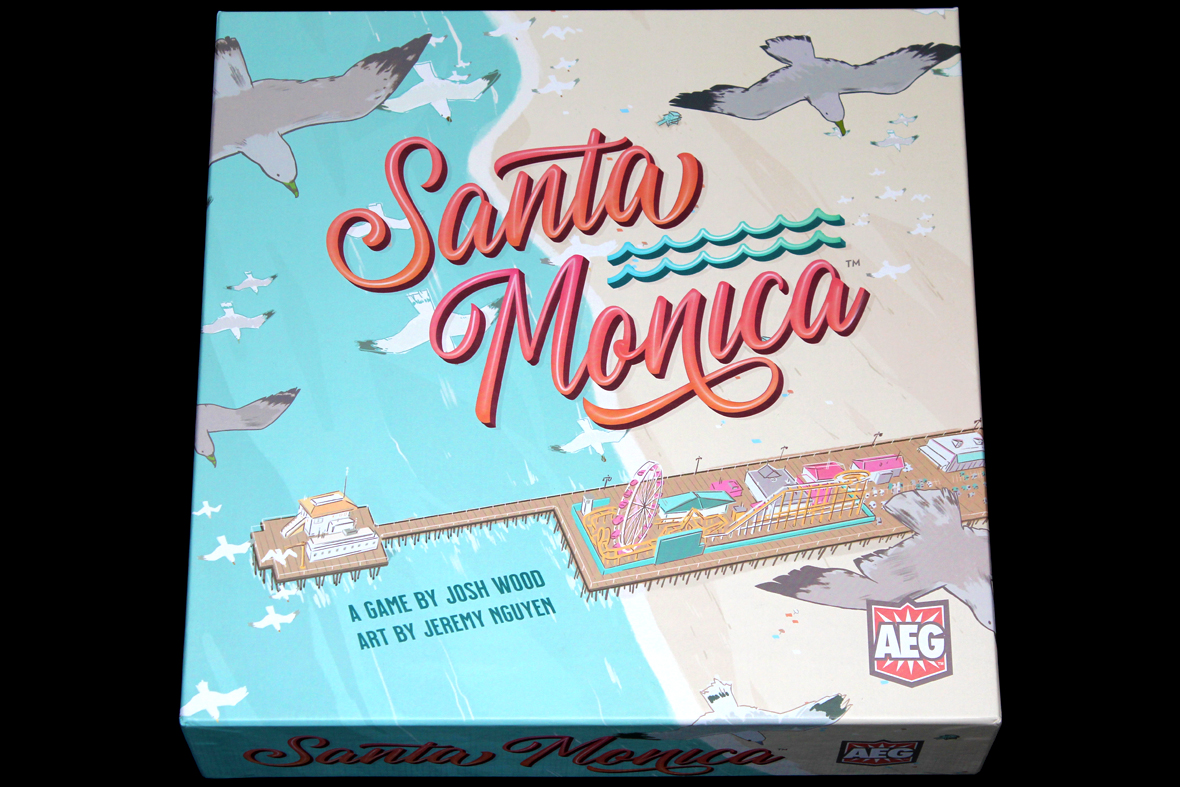 Full disclosure: A review copy of Santa Monica was provided by Alderac.

The outdoors! They’re still there, I assume; haven’t really had a chance to check, lately. Either way, games about the outdoors would be the next best thing if I had people in my house who were super into gaming at the moment. But, I don’t, so I’m making it work as best as I can. And though that makes reviewing harder, it seems like y’all have been enthusiastic about two reviews a week, and I appreciate that consideration since we’re gonna try to keep that coming until I run out my stash of stored reviews (and then will probably go down to one review a week, whoops). But some new games are gradually coming, which is good. I’m getting through them as quickly as can be expected for a person who doesn’t really have a game group, anymore. I digress. Next one on the list is Santa Monica, the latest from Alderac that reminds us of what going outdoors used to be like.

In Santa Monica, players vie to create the most tempting boardwalk by filling a street and a beach with attractions that cater to locals, VIPs, and tourists alike. This is done through a quick-and-simple drafting system, where you can always take a card from the front row of cards and it’s then refilled from the back row. While some cards award sand dollars, which can allow you to make more complicated moves, others give you Tourists or Locals, which can be moved around your play area to potentially score (or lose!) even more points. VIPs can also earn you points for following their specific requests. Play until any player has 14 cards in their tableau, finish the round, and then tally scores. The player with the most points wins! Can you create the ultimate boardwalk? 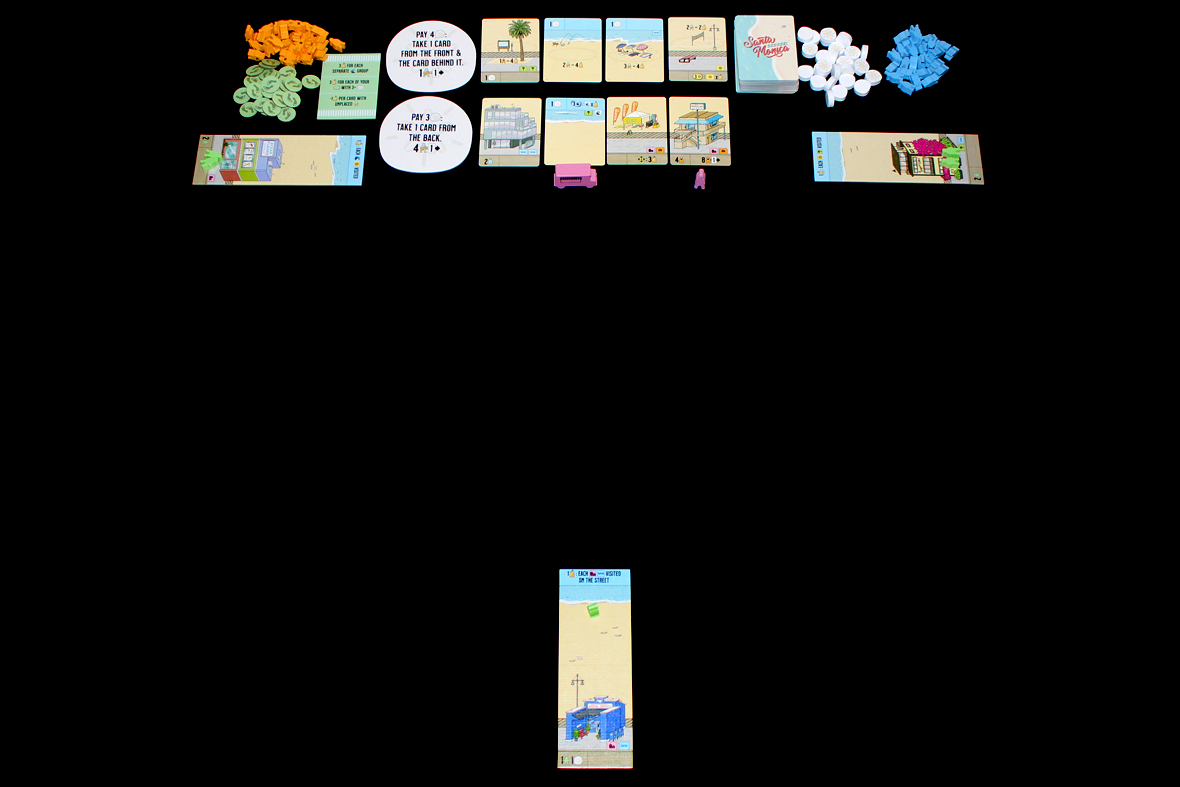 Not a huge difference between various player counts, I’ve found, depending on how you want to play. At lower player counts, you’re competing over everything anyways, so, competing over card types may not be that much of a new thing. The one thing to watch out for is that card churn is a lot lower at lower player counts (only 36 cards [14 * 2 + 8] will be seen over the course of the game, as opposed to 64 cards in the four-player game), so you may not see all the cards you want to see. Means at lower player counts you may be fighting just for Generally Good Cards, rather than cards that advance your particular agenda. At higher player counts that’s compensated for a bit with the extra cards, but now you have to worry about having overlapping goals with an opponent and them trying to come after your cards. That’s not too big of a deal if they’re to the left of you, but if you’re to the left of them you’re likely in a bad way, as you’ll have to get pretty lucky if you want to expose a card that they’re not going to swipe. Stay flexible. To that end, I probably like this most at two players? I’d rather have to deal with a bit of unfortunate card randomness than handling a lot of churn from my opponents. 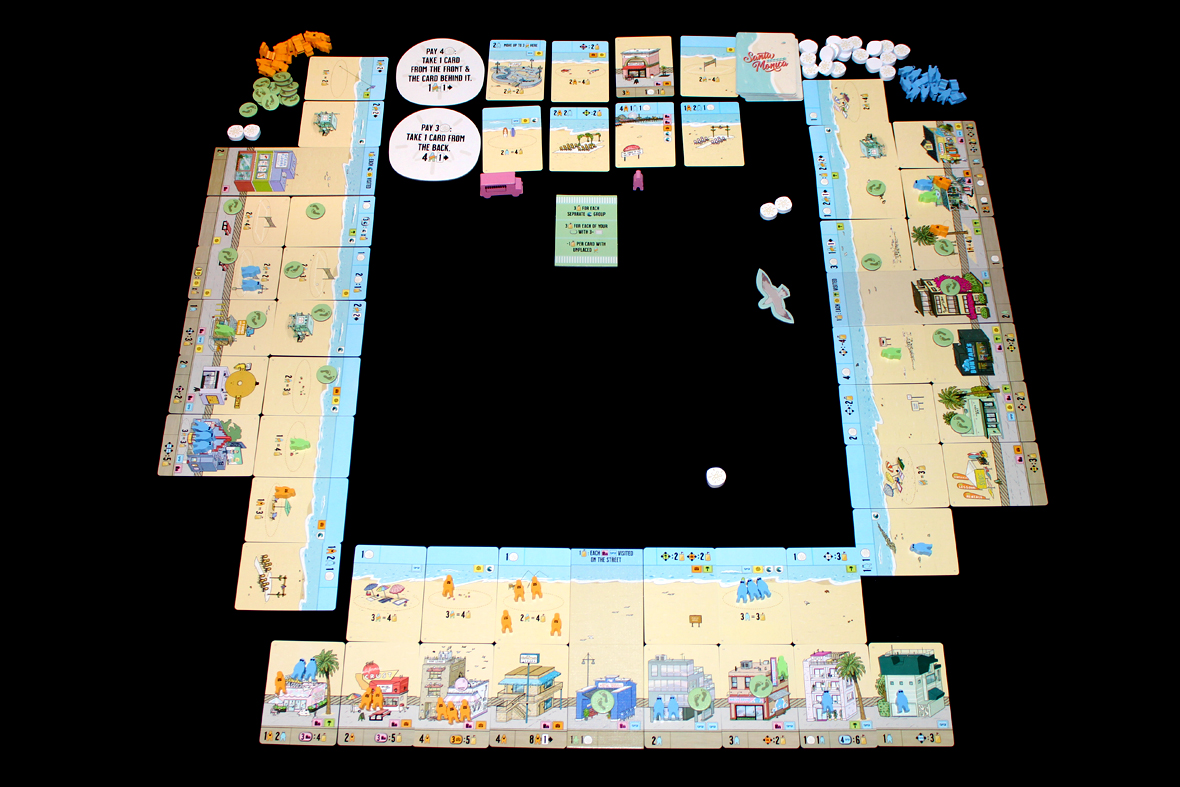 Overall, I’ve solidly enjoyed my plays of Santa Monica! I think it does exactly what you want to see in a fresh tableau-building game. It’s quick, easy enough to learn, and adds a few fresh new things to make it engaging. When I say quick, of course, I mean that it’s fast-paced; this is still a 45-minute game. What really draws me in is the art, honestly; I mentioned earlier in this review that it’s a bit washed-out on the cover, color-wise, and I love the feeling of like, time spent at the beach that that evokes. It’s a very pretty game. Add in that you get to develop a pretty fantastic beachy tableau, and it’s a game that looks good from start to finish. And y’all know I’m a sucker for that exact kind of thing. Even the graphic design is good! It took me a minute to figure it out when I was getting started (since things are at the top on the Beach Cards and the bottom on the Street Cards), but I’m with it now. I’ve got a few gripes around the production of the game itself — mostly that the box is too big for the game and there’s inconsistencies in what objects are double-sided and different on both sides — but that’s not explicitly bringing down my enjoyment of the game. It’s just one of those things I look at and am like, “meh?”. That’s the nature of things, I suppose. We’ll see how the game evolves, anyways; maybe there will be more to justify the full-sized box (as opposed to Point Salad or a similar box size). Either way, I do quite like Santa Monica, and I’m excited to play more of it, so if you’re looking for a fun tableau-building game with great art and some novel quirks, I’d recommend checking it out!