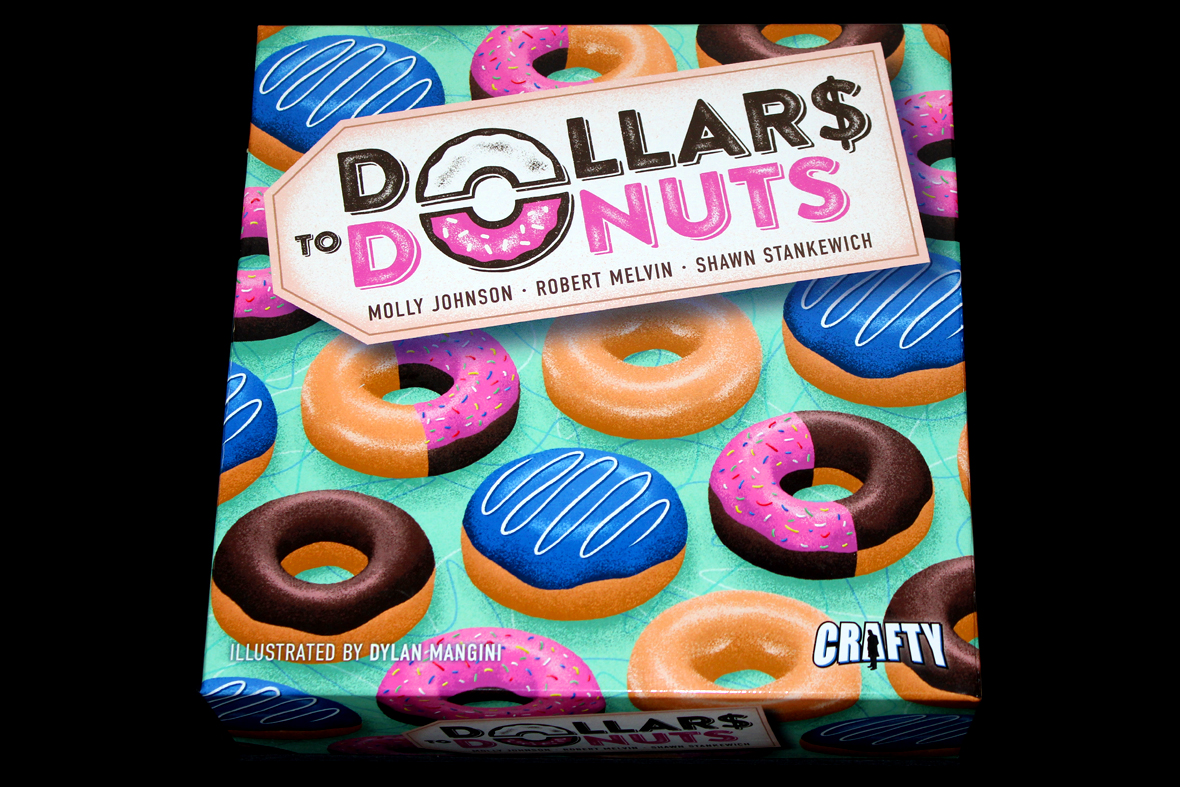 Full disclosure: A preview copy of Dollars to Donuts was provided by Crafty Games. Some art, gameplay, or other aspects of the game may change between this preview and the fulfillment of the Kickstarter, should it fund, as this is a preview of a currently unreleased game. Also, while I don’t charge for Kickstarter previews, the publisher was charged a rush fee due to the tight timeline they needed the review completed in.

Like I said, more Kickstarters. So many more Kickstarters! Two this week! Another next week! Just … tons of Kickstarters. Will focus on some more recently-published games towards the end of the month, for sure. Either way, we’ve got a new title coming from Flatout and Crafty Games. After Flatout gave us Calico last year, I’ve been enthusiastic about the nice mix of puzzles and aesthetics that they tend to produce, so I’m very stoked to see what’s going on in Dollars to Donuts. Let’s find out!

You’ve achieved the dream and now own your own donut store in what I can only assume is the Pacific Northwest. To their credit, between General Porpoise, Top Pot, and Mighty O, they’ve got a fair number of good options, so your competition is going to be pretty strict. Everyone wants the same thing, and that’s to delight the various folks who live near your shop with delicious donut treats. But you’re resolving to be the best. Dough? Or Dough-not? It’s up to you. 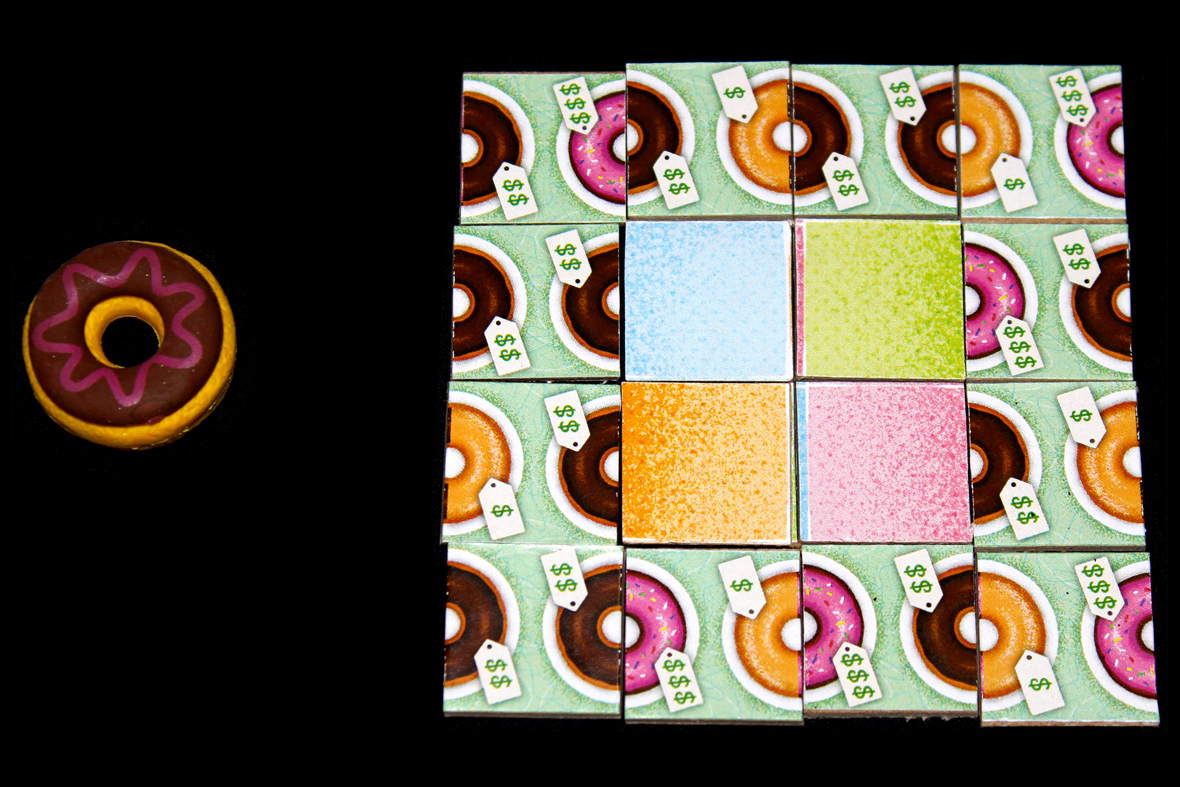 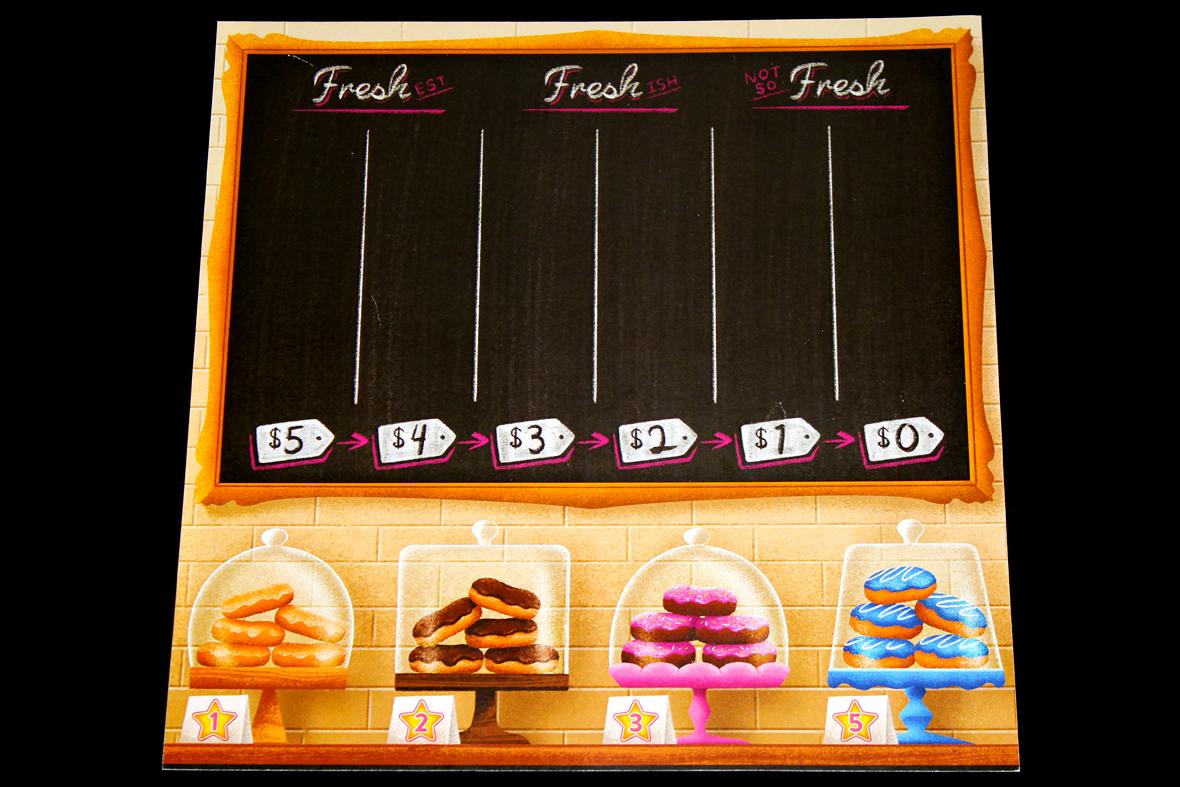 Set the Donut VP Tokens aside: 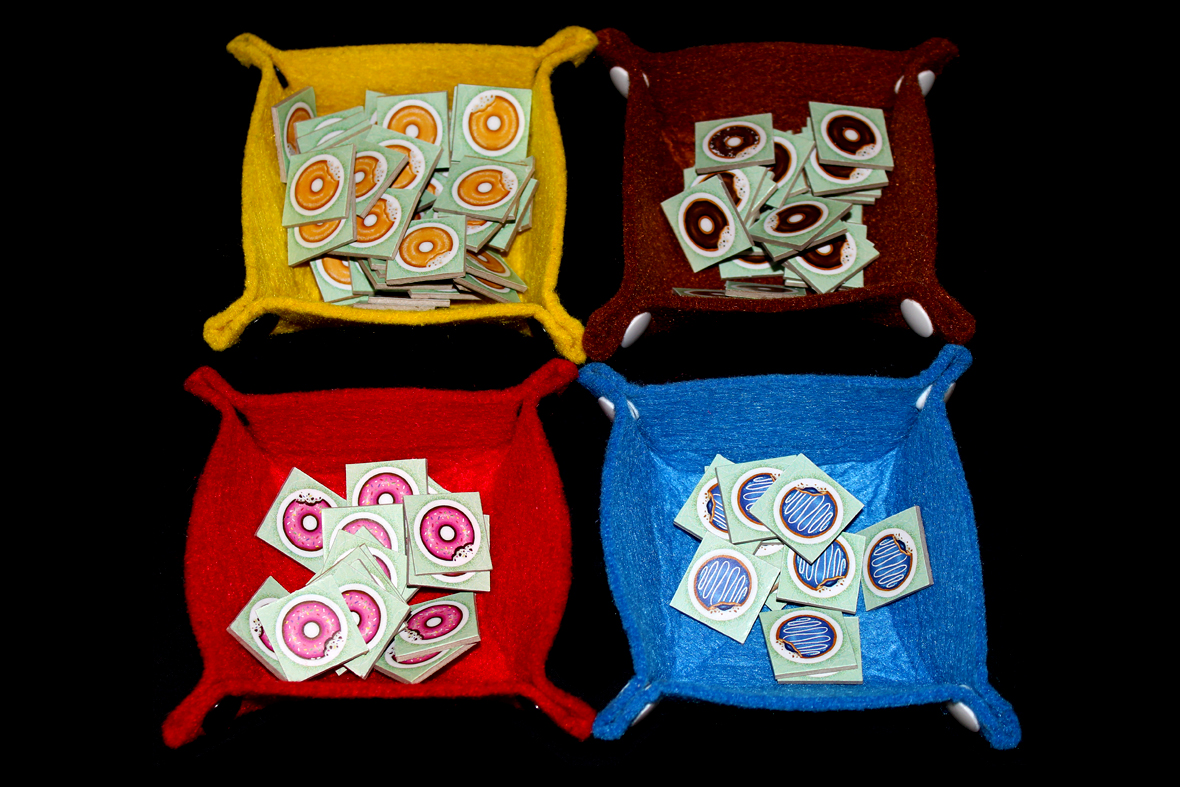 Shuffle the Donut Tiles and fill the Specials Board from left to right (6 tiles): 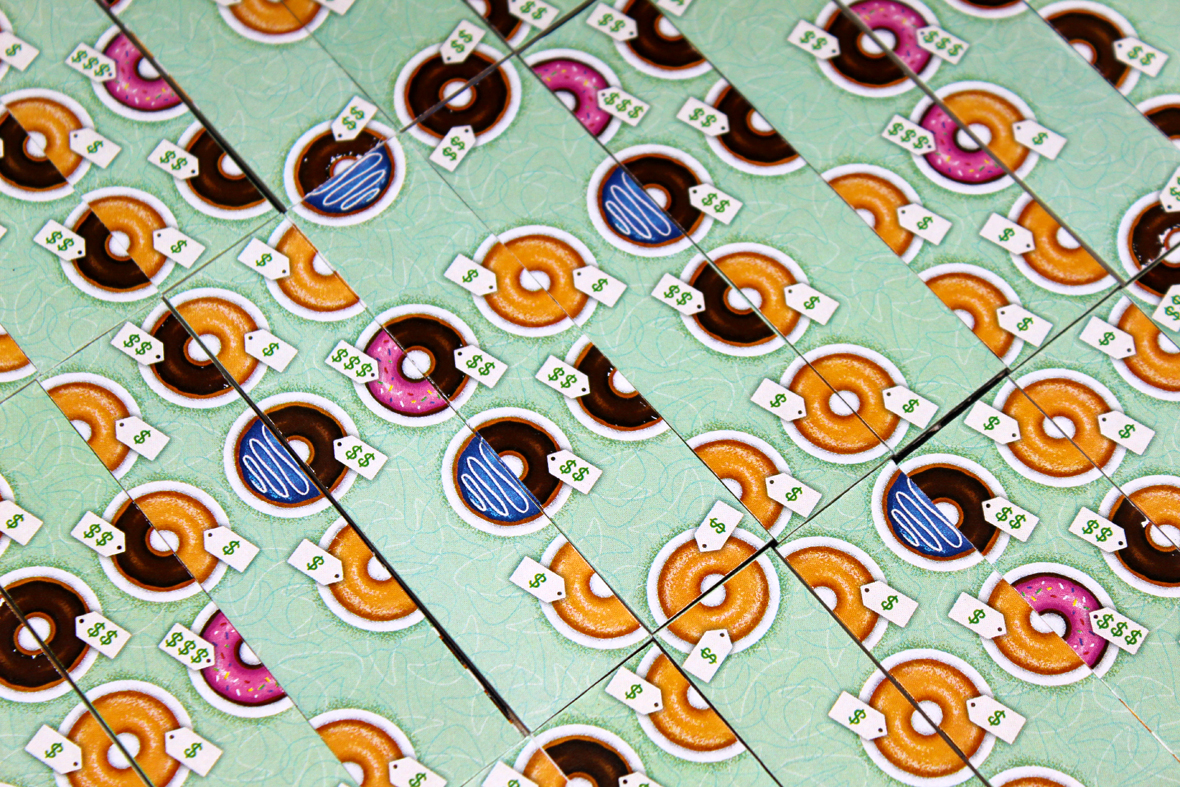 Set the rest face-down next to the board. Shuffle the Customer Cards and reveal 4:

You should be good to start! 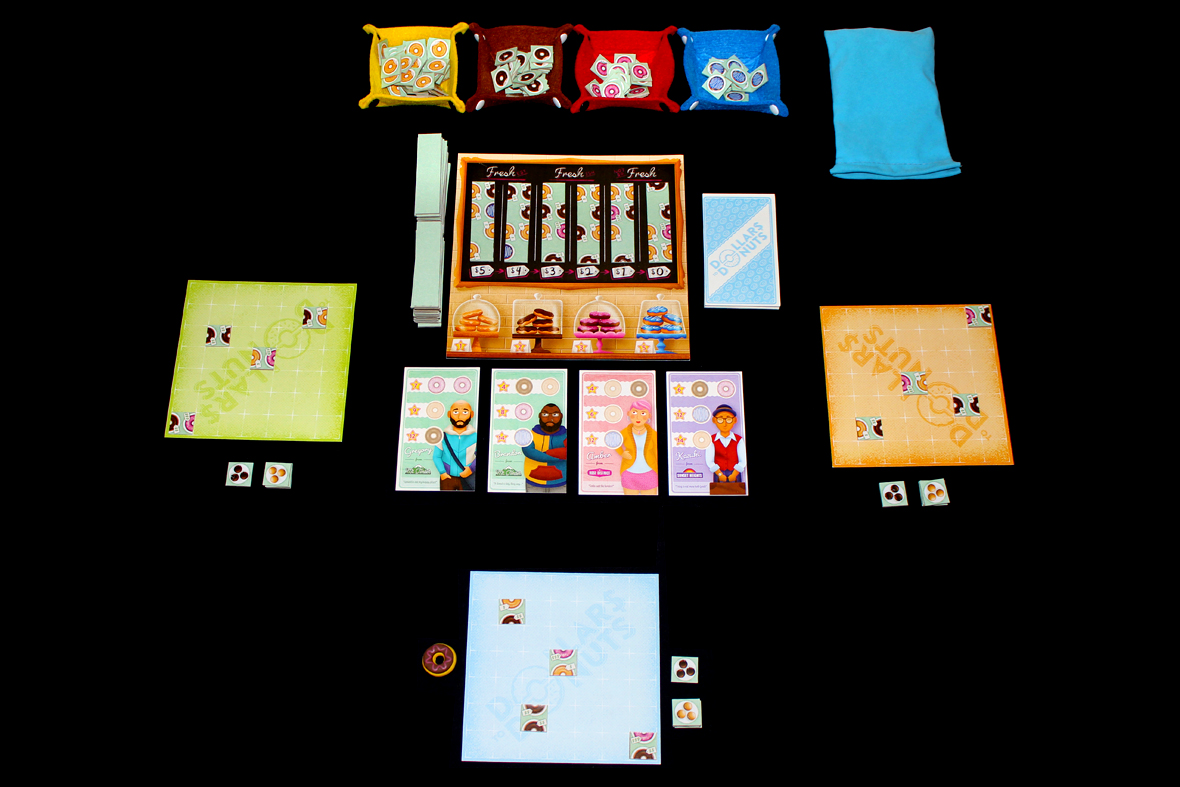 The flow of the game isn’t too difficult either. You want to make sure that your donut shop carves out its place in donut history by catering to a variety of guests from a variety of neighborhoods. Your opponents want the same thing; naturally, there’s tension. Who will triumph?

On your turn, you first start by purchasing a Donut Tile from the Specials Board. You may end up paying $0! If you need to spend Actual Money on the tile, spend your Dollar Tiles to do so. It doesn’t matter what’s on the front of them; they all have a dollar on the back and are Valid Currency. Once you take the tile, place it on your board such that at least one square of the tile is on your mat (it may extend off your mat). Just remember, like most tile games, once you place the donuts, they’re locked in.

For each complete donut you create, one of two things may happen:

You may also, on your turn, place one of your Dollar Tiles anywhere on your board. Pairs of identical Donut Holes can score points later, and halves of donuts can create new donuts that are either matched or mismatched. No matter what, though, you may only place one Dollar Tile per turn.

Finally, if you have the correct Donuts, you may serve a Customer by taking one of the cards from the center and placing Donuts on the empty spaces such that you match one of three options:

Once you’ve decided, you cannot add Donuts in the future.

Either way, slide the Donut Tiles to the right to fill the gap you created and draw a new Donut Tile, and if you served a Customer, refill the empty space with a new Customer Card from the deck. 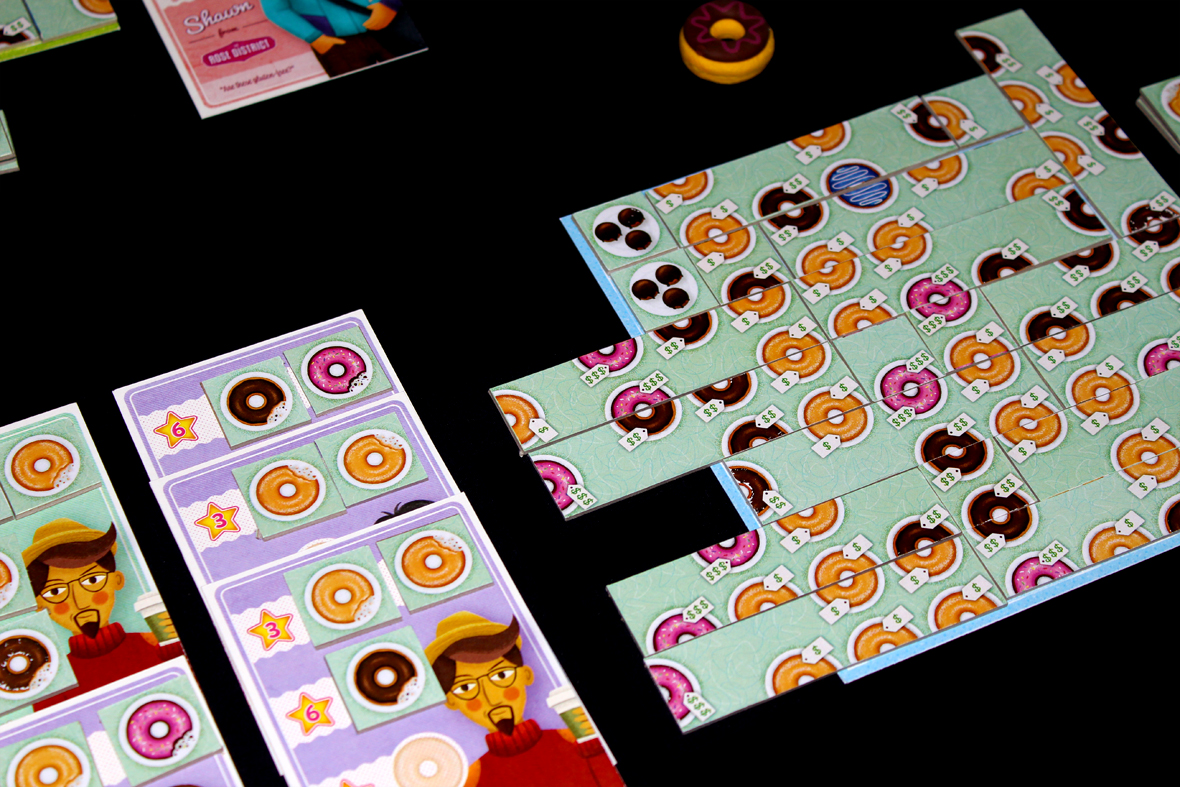 Once a player has filled out their Player Mat (or the Specials Board cannot be refilled because you’ve run out of Donut Tiles), finish the round and the game ends! If you cannot place a Donut Tile on your turn, just skip to placing a Dollar Tile, if you can.

Either way, score! You score points equal to the bottommost row on a Customer Card you filled and for any extra Donut Tiles you have left:

You also get bonuses for pairs of Donut Holes on your Mat:

Customers all belong to Neighborhoods, as well, which come with their own bonuses:

Finally, subtract 1 point for each open spot you have on your player mat. The player with the most points wins!

I think, with this one, most of the difference around player counts comes down to how much you can rely on the game state to be preserved until your next turn. Since there are effectively two different markets running during the game (the Donut Tiles and the Customers), as the player count increases, those markets are going to get more and more chaotic. This will just usually mean that if you leave a Customer at the end of your turn, you run a much higher risk of not getting a chance to fulfill their order on your next turn. The Customers and Donut Tiles don’t really scale with player count, so, that’s not terribly surprising that that’s the case. Players competing over a shared but finite resource is a fundamental part of a lot of board games. That said, adding in the other players taking time to take their turns, you’re gonna get a slower and more chaotic game as the player count increases. As a result, I tend to prefer this game at lower player counts, rather than higher ones. 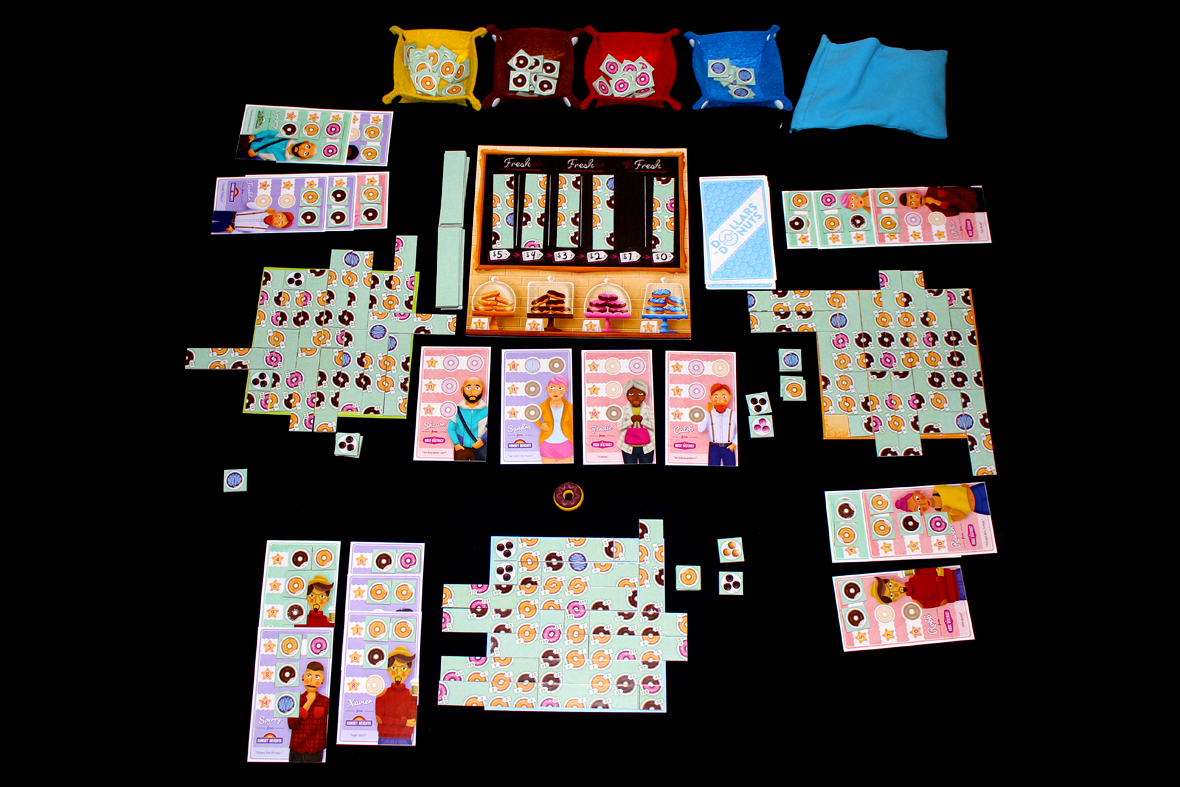 Overall, I think Dollars to Donuts is a lot of fun! It’s hard not to love it at first sight, given the delightful theme and a fantastic art job, to boot. I’m a sucker for that sort of thing in games, and this is definitely a game that caters to that specific overlap of my interests. We can’t escape ourselves, I suppose. Nice thing is that it backs up its art with a pretty solid game attached! I do wish the tiles were bigger, but generally speaking I think it’s more that I just would like bigger donuts in real life, maybe? Hard to say. As far as other mechanics go, I don’t really love drawing money tokens for split donuts (it feels a bit swingy; had one player with much better draws than another, it felt like). I do like the rest of the game, mechanically, quite a bit, though! I’m often looking for games that do a good job capturing fun spatial puzzles, and I particularly like that this one uses 1×4 tile blocks to force players to make uncomfortable decisions to try and maximize their donut output. I think the game would genuinely be a lot less interesting if it were only 1×1 squares; 4 is just enough that you’re a bit frustrated by the limitations and you have difficulty planning, visualizing, and optimizing. It’s a great choice, I think. Overall, I think it satisfies my constant desire for a puzzley game, and it adds on great art, diverse characters, and a fun theme to tie it all together. Personally, I think Dollars to Donuts is a lot of fun, and if you’re looking for a game with any of those three things or, like me, you’re just a donut fiend, I’d recommend checking it out!