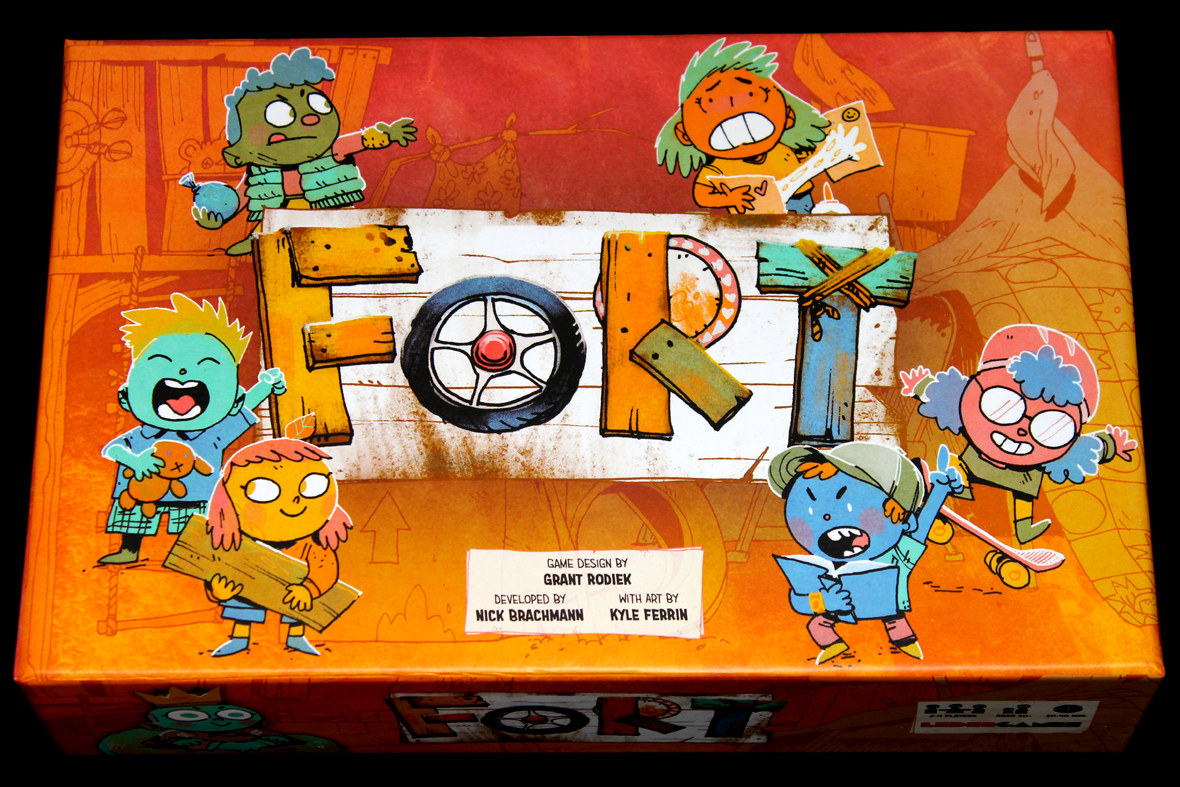 Full disclosure: A review copy of Fort was provided by Leder Games.

I’ve been waiting for this game for a long time. Heard rumors on the wind that maybe, just possibly, SPQF was going to see new life. But what company would want to pick up what is likely my favorite standalone deckbuilder? Oh, Leder would. Yeah, that scans. It’s a great fit for them, though I’ll admit it’s a bit outside their Root and Vast pedigree, until you consider the asymmetry of possible playstyles available to you in Fort, then I think it makes more sense with their brand overall. We’ll have to see, though, what they do next; will this lead to more smaller-box titles? I’m not sure. Either way, let’s be real here: this is an update and upgrade to a game that I just referred to as my “favorite standalone deckbuilder”; if you’re looking for a harshly negative review, I’ll freely admit in the opening paragraph (a rarity!) that I really loved getting to play Fort. What I’d read the rest of this review for is the normal setup and gameplay, but also some thoughts about what makes it different from SPQF, and why I think those changes are by and large for the better. Shall we?

In Fort, you play as kids trying to build the best fort in town. As kids do. You’ve got your best friends, of course, but you’ve also recruited local kids to your cause with two things that are irresistible to up-and-coming builder children: toys and pizza. Naturally, you’re competing against your rivals to build up these forts, so you may need to recruit even more kids to your cause. But be careful! Your best friends will always stand by you, but these neighborhood kids are fickle; if you forget to play with them because you’re focused on this fort of yours, they may well find their way to another person who is willing to treat them with respect. And wouldn’t you know? Your opponents are all too happy to oblige…

Setup is pretty easy. Everyone gets a player board: 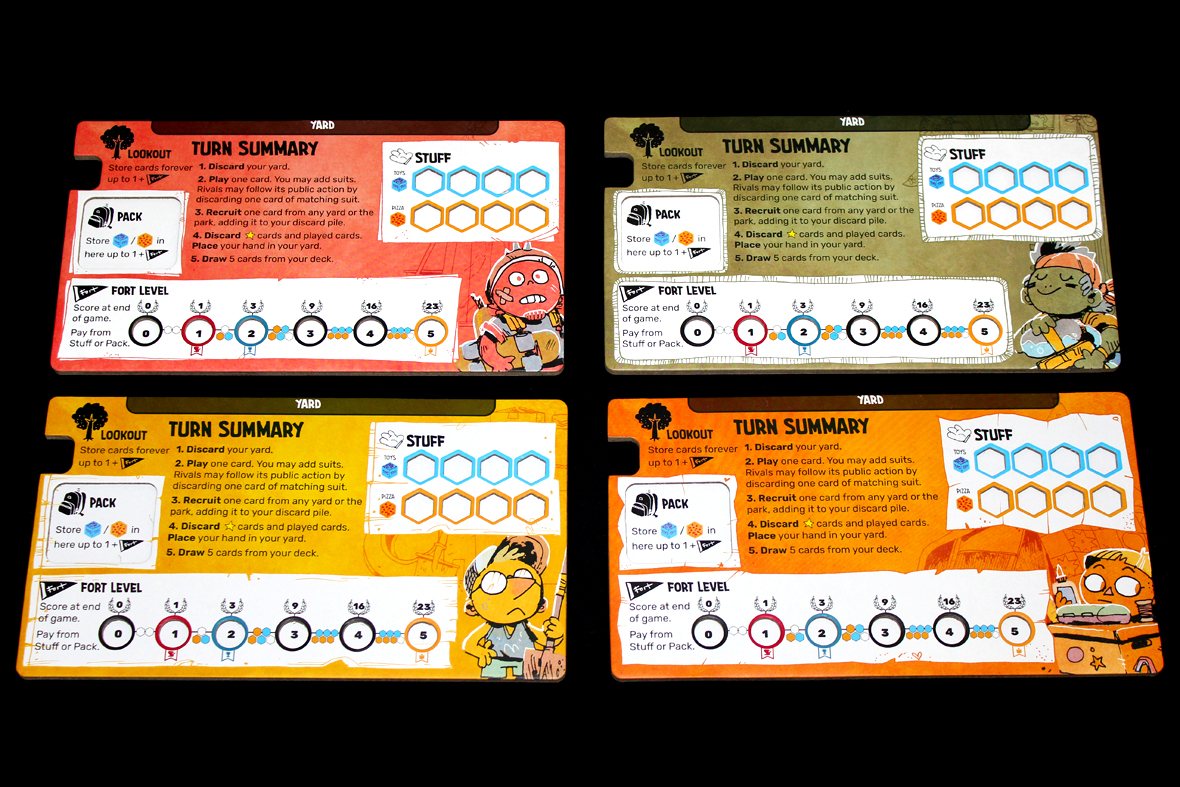 And a Fort Token:

Set the score board nearby with the score tokens at 0:

Give each player two Best Friends: one wild (with the coin symbol) and one in their player board’s color: 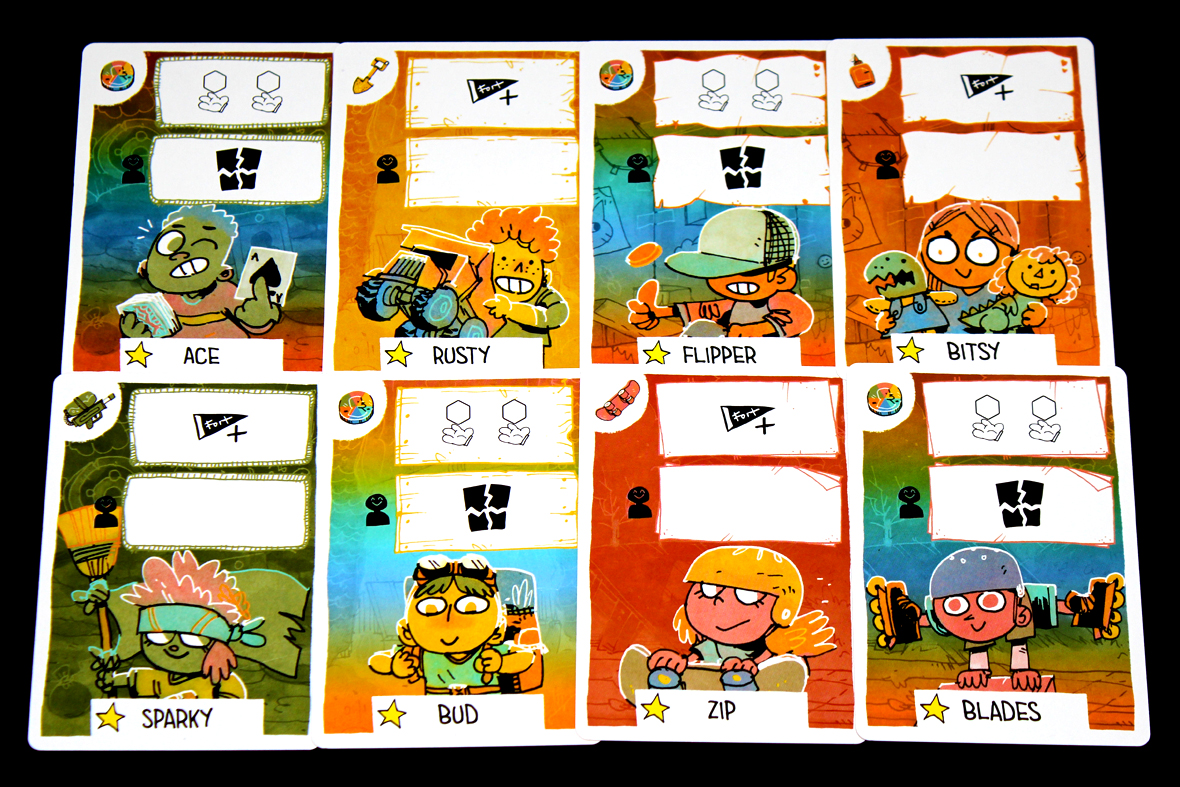 Set the Toys near the score board:

And I usually place the Pizza on the other side: 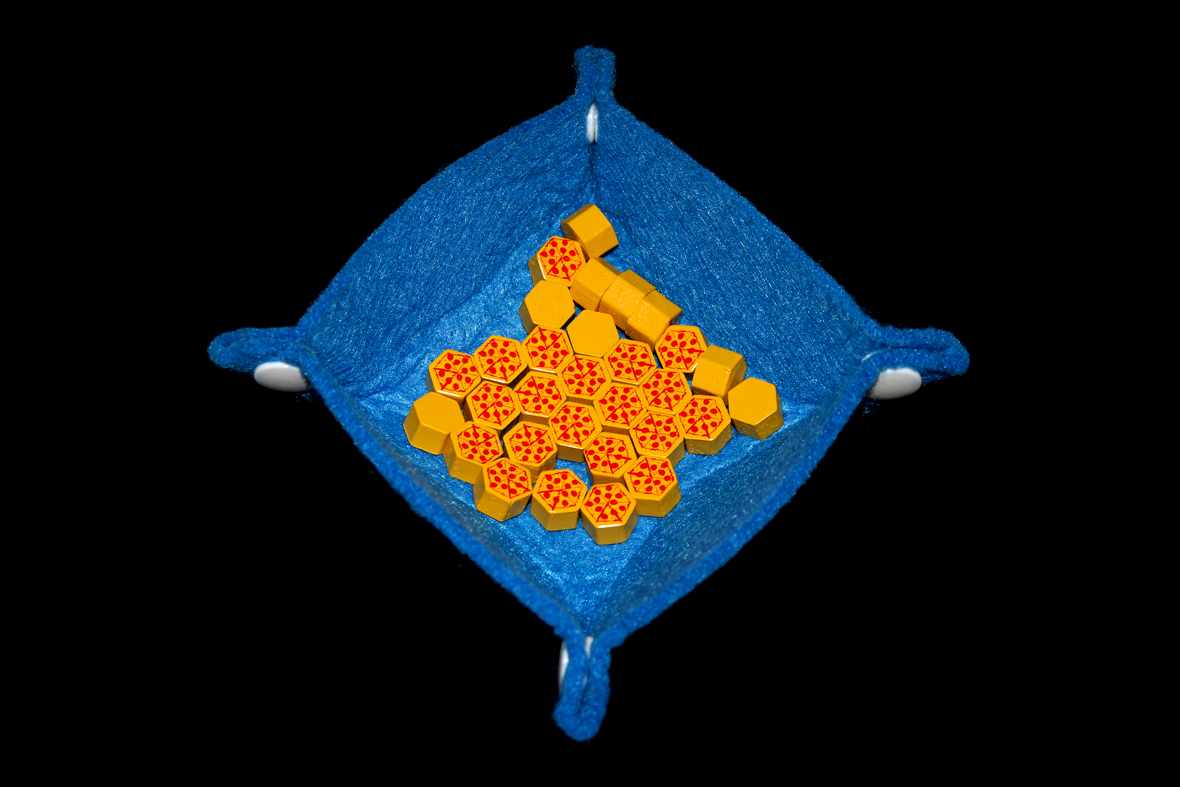 Shuffle and place X Perks face-up above the score board, where X is the number of players, plus 1:

And shuffle and place X Made-Up Rules face-down in a stack nearby, where X is still the number of players, plus 1:

Almost done! You’re going to choose a player to go first and give them the First Player card, setting the Macaroni Sculpture card nearby: 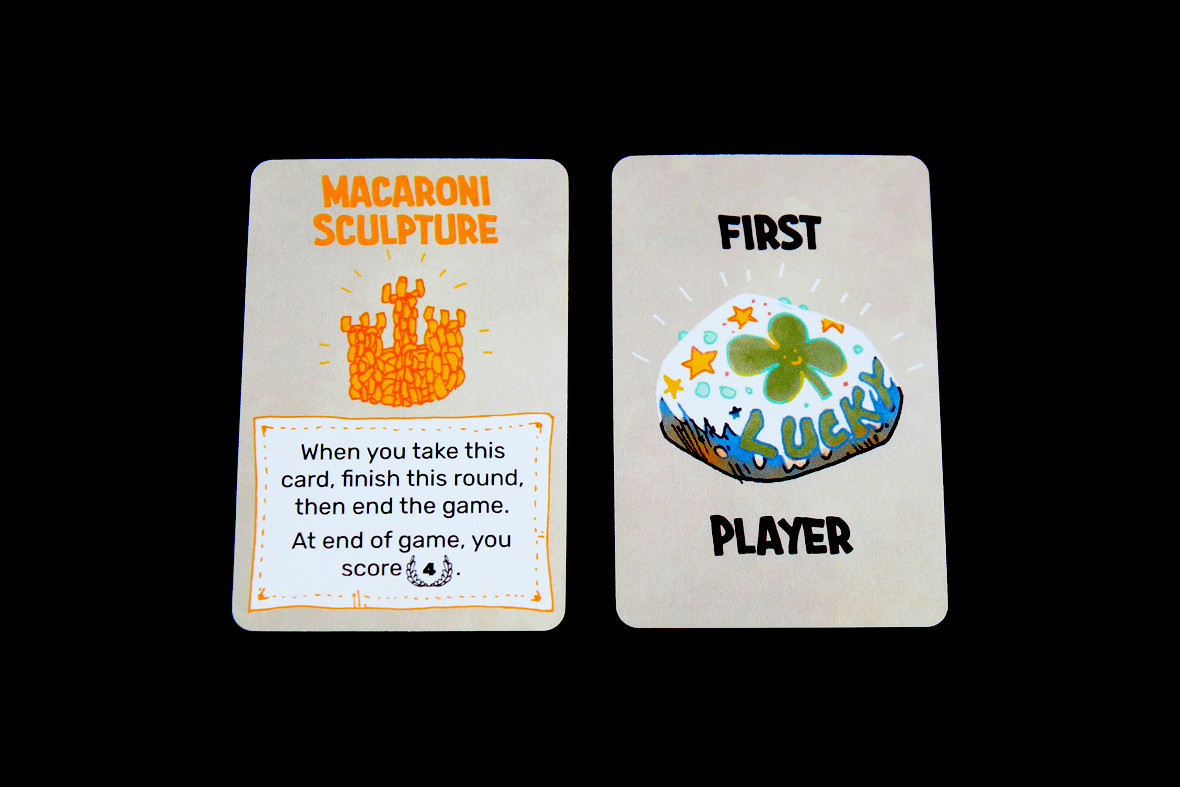 And now you can shuffle the Kid Cards!

Deal each player 8. You may want to give them an icon reference sheet, as well:

If you want, you can play with a drafting variant where players draft those 8 cards. If you do, setup looks like this: 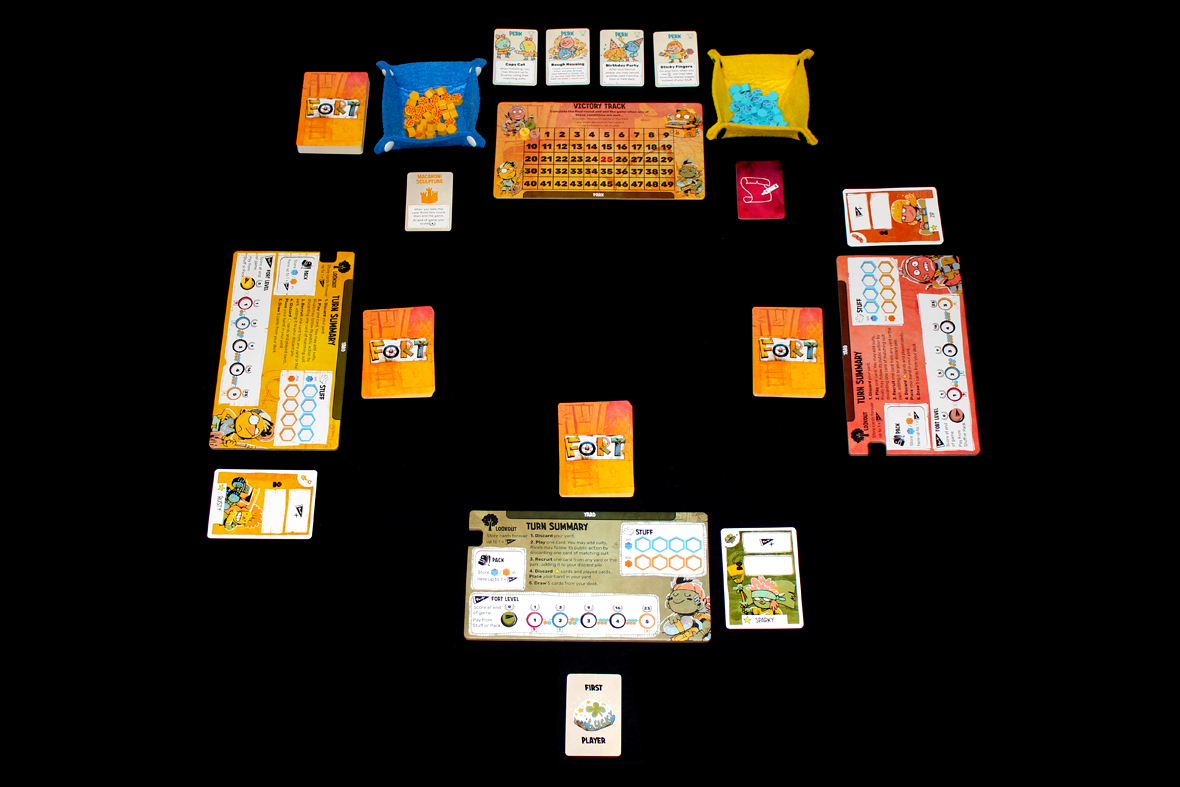 Otherwise, you can just shuffle your Best Friends in with those cards to make your starting deck! Reveal three Kid Cards below the score board to be the Park. Either way, each player shuffles their deck and draws 5 cards: 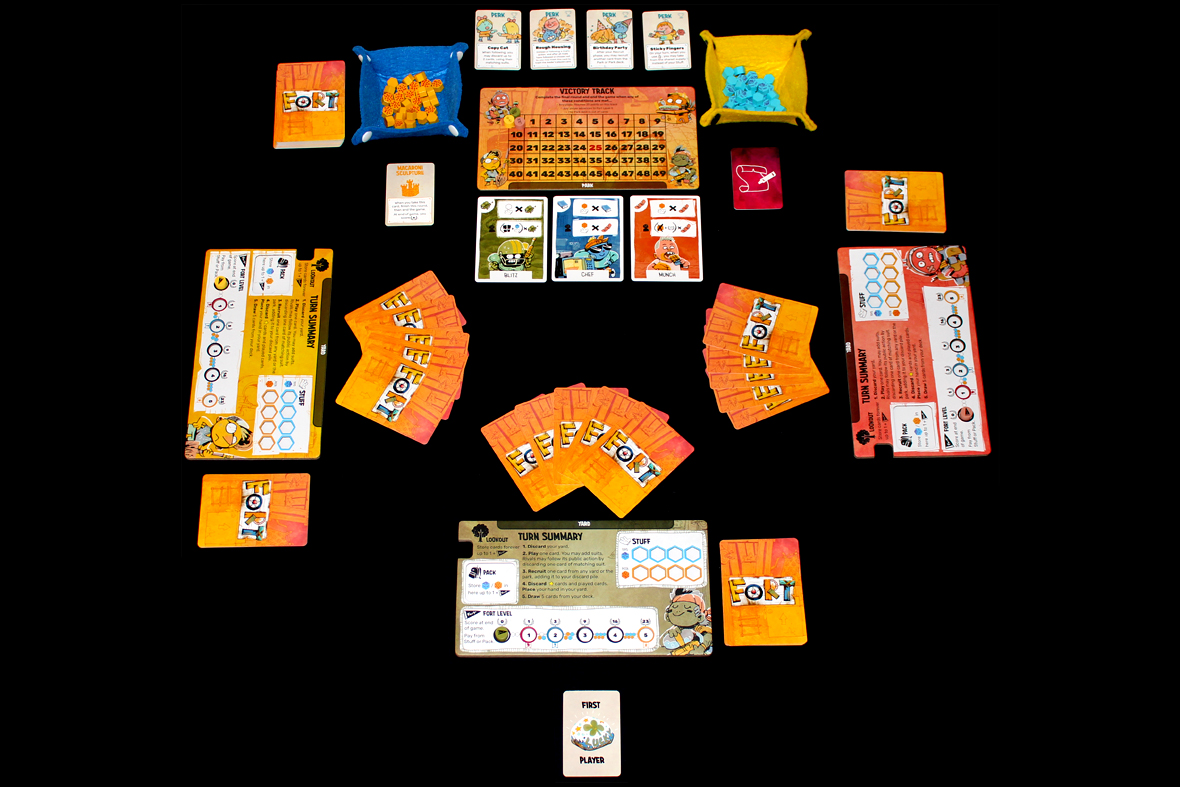 Fort, for all its intricacy, isn’t too complex in terms of its gameplay loop. Your goal, as kids, is to build up the best fort in town. Do that, and you just might win! It’s still a fair bit of deckbuilding, but with some interesting odds and ends that we should dig into. Let’s find out what’s happening under the hood.

At the start of your turn, if you have any friends in your Yard, you should add those to your discard pile. You won’t have any on your first turn.

On your turn, it’s pretty simple: you may play one card. You don’t have to play a card, but, generally, you want to kind of play the game. All cards have a Public Action (top box) and / or a Private Action (bottom box). You can use both in either order, if present, but you must completely finish one before starting the other. Certain actions have an x on them with a card suit; you may play more cards of that suit to improve that card’s effect (known as adding cards). Those cards don’t get to use their actions; they’re simply discarded. You may not add cards if they would not do anything (why you’d want to do that will be explained later). Cards in your Lookout may be added to your played card as though you had added them by discarding them from your hand; the bonus is that the cards in your Lookout stay in your Lookout for the entire game.

Note that you must use at least one action on your cards completely; the other action may be used partially or not at all.

When you use an action, other players may follow it by playing a card of the same suit.  Only the Public Action may be followed, and only one card may be discarded. Note that if that card has two matching suits, though, you may perform the action twice. If the leader discards a coin card, they declare the suit that must be played in order to follow, and if the leader had a choice between collecting toys or pizza, you must follow that choice. You may follow each player on their turn, if you have the cards to do so. Do not draw cards to replace cards you used to follow. 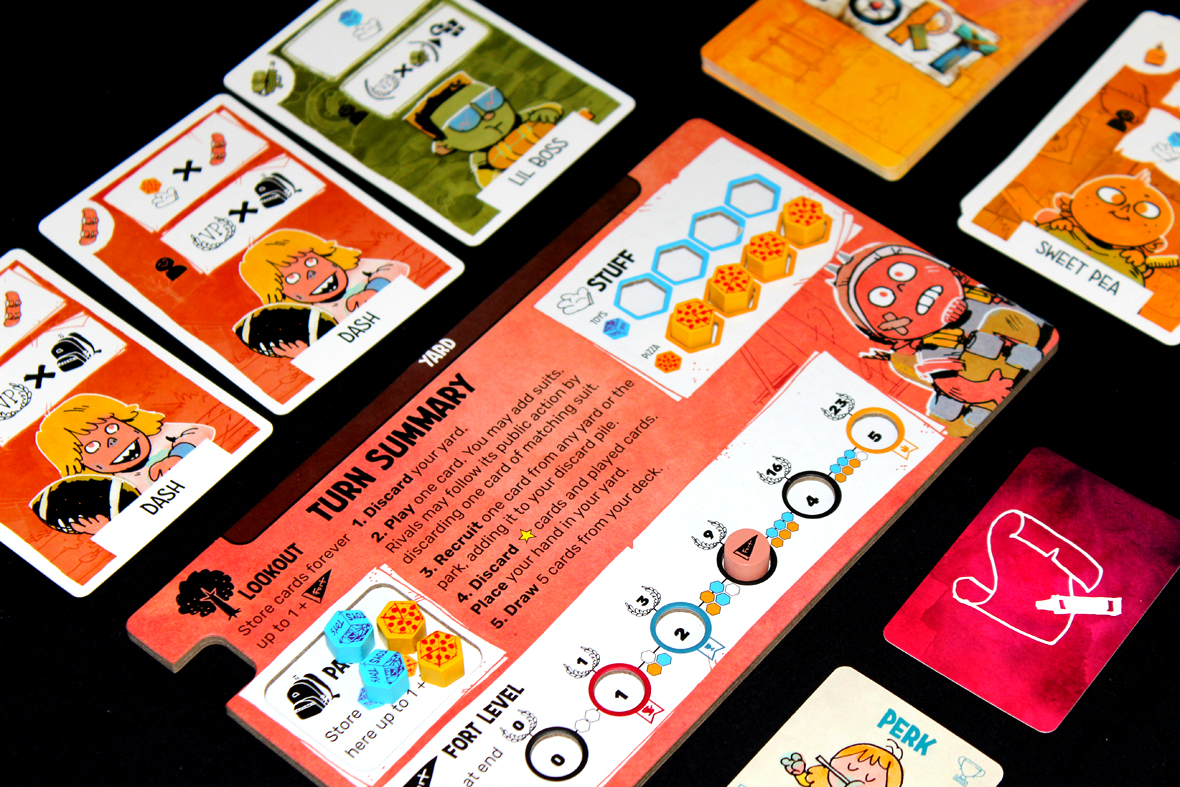 Certain actions may lead to you building up your Fort. This is done by discarding the toys and pizza indicated to the right of your current Fort level. As you do, you’ll gain a Made-Up Rule (an end game bonus scoring condition) and a Perk (a single- or multiple-use ability). If you hit Fort Level 5 and no player has hit it before now, take the Macaroni Sculpture! The game will end at the end of this round.

Once you’ve completed your action, you may Recruit. You may take a single card from the Park, the Park Deck, or any player’s Yard. Add the card you took to your discard pile.

Towards the end of your turn, after recruiting, you discard any Best Friends (cards with stars) in your hand and the cards you played and added. Any cards remaining are added to your Yard; if you don’t play with your friends, they might just leave!

Finish your turn by drawing 5 cards from your deck. If your deck is empty, draw as many cards as you can, then shuffle your discard pile to become your new deck. Note that this specific moment is the only time in the game that you draw cards!

The game can end in one of three ways:

At the end of the round (all players have taken the same number of turns), the game is over. Calculate your final score, taking into account your Fort Level Bonus Points, your current Victory Points, your Made-Up Rule, and the Macaroni Sculpture, if you have it. The player with the most points wins!

Not a ton, generally, but there is one critical difference, and that’s that other players can inadvertently screw you over by giving your opponents access to critical path actions that you keep denying them. You will inevitably play Fort with a player who doesn’t notice that another player has enough resources to up their Fort level to the maximum, which is a huge danger. They’ll lead with a Fort action, and then that player will follow and the game’s over. That risk obviously increases as player count increases, as there’s no real way to plan for that. There’s something to the argument that you should diversify your deck more as player count increases to compensate for that, so that you have access to more follow actions, but I’m not sure that’s the best bet, since it dilutes the strength of actions on your turn when you’d want to be able to get a lot of something. That said, I think the increase in potential follow actions keeps the game moving at a good clip and keeps it fresh, which I really appreciate. I don’t have a strong preference for this game, player-count-wise, but I do love the two-player game. It’s very strategic, trying to take as much as you can without giving your opponent an inch. I like that kind of game a lot, and Fort certainly delivers in that department. 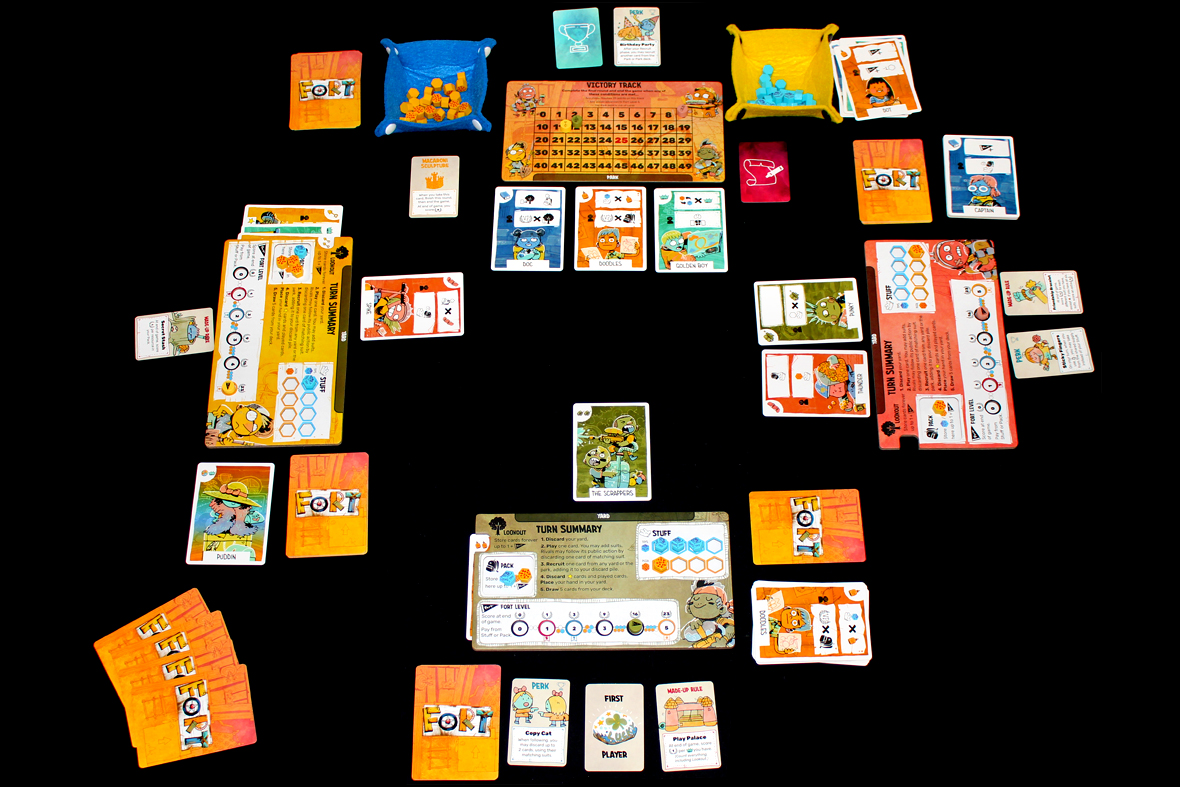 Overall, I think of Fort much the same way I think of SPQF: as a triumph. It does a great job taking the things I liked about SPQF and contextualizing them against a new backdrop. I did like the animal theme maybe slightly more, but, eh, such is the price of progress. I’m okay giving that up for what I think are generally graphic design and quality-of-life improvements galore from a company that really gets how to make that happen. It elevates SPQF, in my mind; it takes something that really was a one-off labor of love and makes it largely more accessible to a wider audience while still preserving the things that made it unique. That said, it’s difficult for any game to be perfect; I do think the game would have benefitted from having larger tokens and an easier way to put cards into your Lookout beyond just kinda lifting the whole thing up. I assume the former was a consequence of the desire to make the box length / width be approximately half of Root for consistency’s sake; smaller player boards leads to smaller tokens. Not my favorite thing, but I understand. Similarly, though I complain about the sheer complexity of the game and the amount of iconography hampering accessibility for newer players, I do think that the game was not intended to be anyone’s first deckbuilder (and better candidates for that exist, in my opinion). It’s something worth noting as a drawback of the game, but it’s also important to note that those folks are not in the game’s target audience, as far as I’m aware. Same with SPQF, frankly. The things I’m most excited about are the new features, like Perks and Made-Up Rules; I think those keep the game fresh through multiple plays and encourage thinking about different lines of strategy, which I think is awesome. As I said in the beginning, I’m pretty over the moon about Fort, so this shouldn’t exactly come as a surprise. If you’re looking for an intricate deckbuilder to sink your teeth into or you just want to see the latest from Leder, I’d definitely recommend checking out Fort! I’ve had a blast playing it.