Life is either a daring adventure or nothing. You’re not sure which, but at least you’ve narrowed it down. You are rich with life experiences, but have had trouble trading them for goods and services. It’s time to seek your fortune, or anyone’s really, whoever’s is closest. To the west there’s a land of milk and honey, full of giant bees and monstrous cows. To the east, a land of eggs and licorice. To the north, treacherous swamps; to the south, loyal jungles. But all of them have been thoroughly pillaged. You’ve heard legends though of a fifth direction, as yet unspoiled, with its treasures conveniently gathered into troves. You have your sword and your trail mix, handed down from your father, and his father before him. You’ve recruited some recruits and hired some hirelings; you’ve shined your armor and distressed a damsel. You put up a sign saying “Gone Adventuring.” Then you put up another sign, saying “Beware of Dog,” in case people get any ideas. You’re ready. You saddle up your trusty steed, and head florst.

So we’re super in the home stretch, now. Finished up all the “regular” expansions, now moving on to the “occasional” expansions (and finally the second edition upgrade packs, though being real I was pretty excited about being done before those came out).

We’re now on Dominion: Adventures, sort of a “best of” Dominion expansion with a bit of everything — more of Seaside‘s Duration cards, more cards that trash things a la Dark Ages (including a specific card, Ratcatcher, that should remind you of something), and a whole bunch of cards you’ve never seen or tried before, from Reserve cards to the eventually-impressive Traveler cards. Ready to explore another expansion?

Stop me if you’ve heard this one before. So, this is a similarly massive Dominion expansion, adding in 30 sets of Kingdom cards:

Including an entirely new type of card, which I’ll cover in Gameplay.

Anyways, set aside the base cards (Copper, Silver, Gold, Potion, Estate, Duchy, Province, Curse), and then set them up:

Grab your randomizer cards and choose 10: 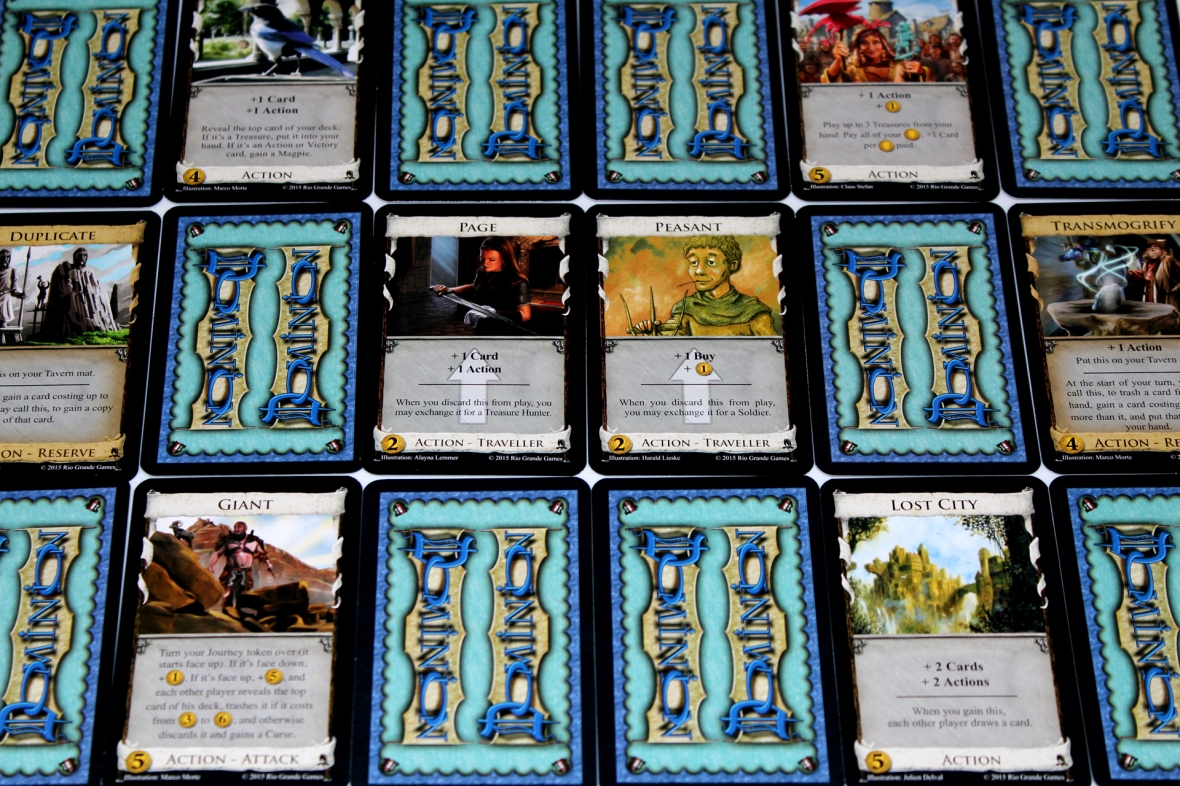 And then, before we get set up, you should be aware of a few things, starting with Event Cards: 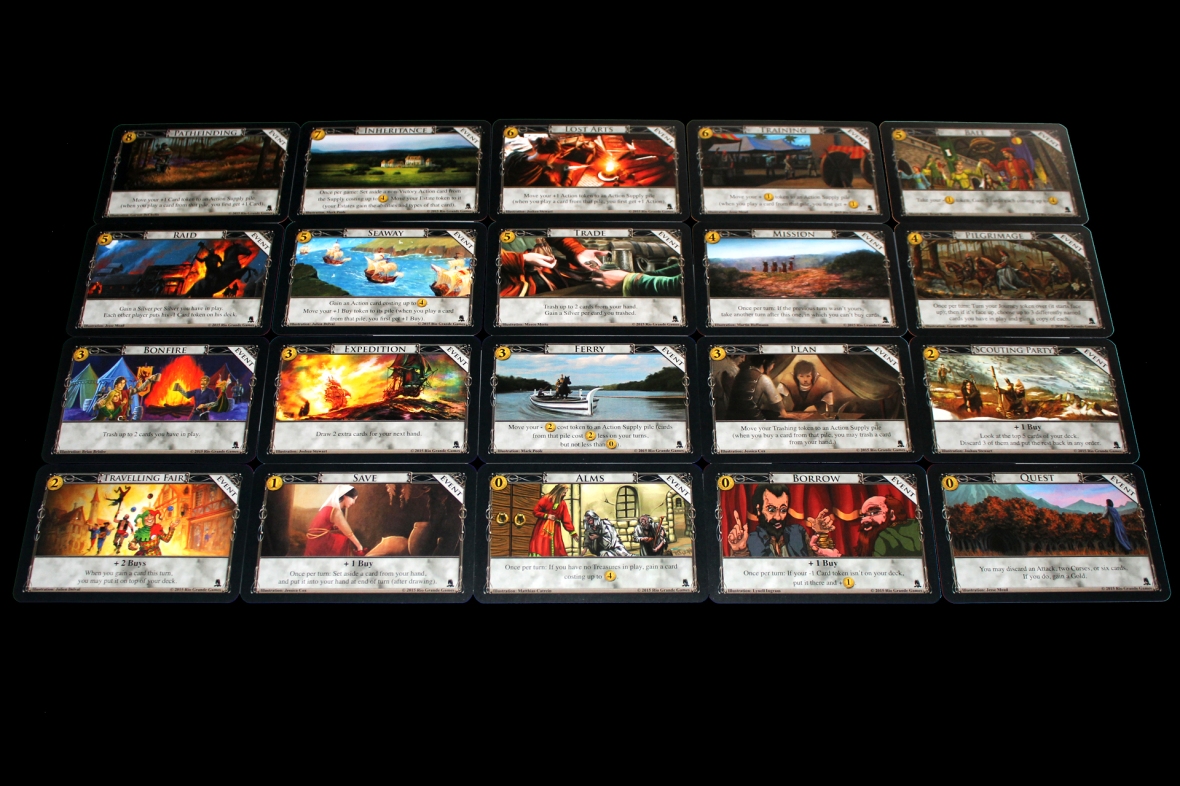 If you pick either the Page or the Peasant, you’ve picked Traveler cards, so you’ll need to make sure you set their upgrades close by (but not in the Supply): 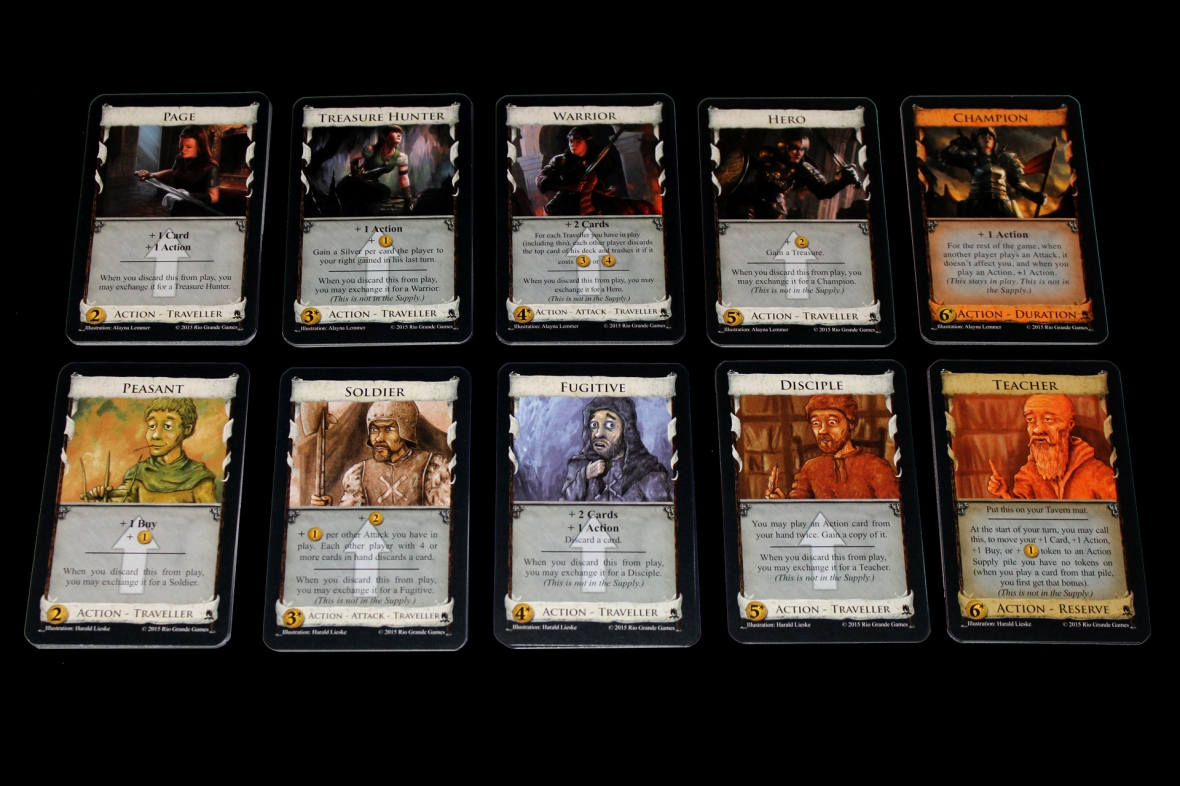 Now, once you’ve done all that, you should have the Supply ready: 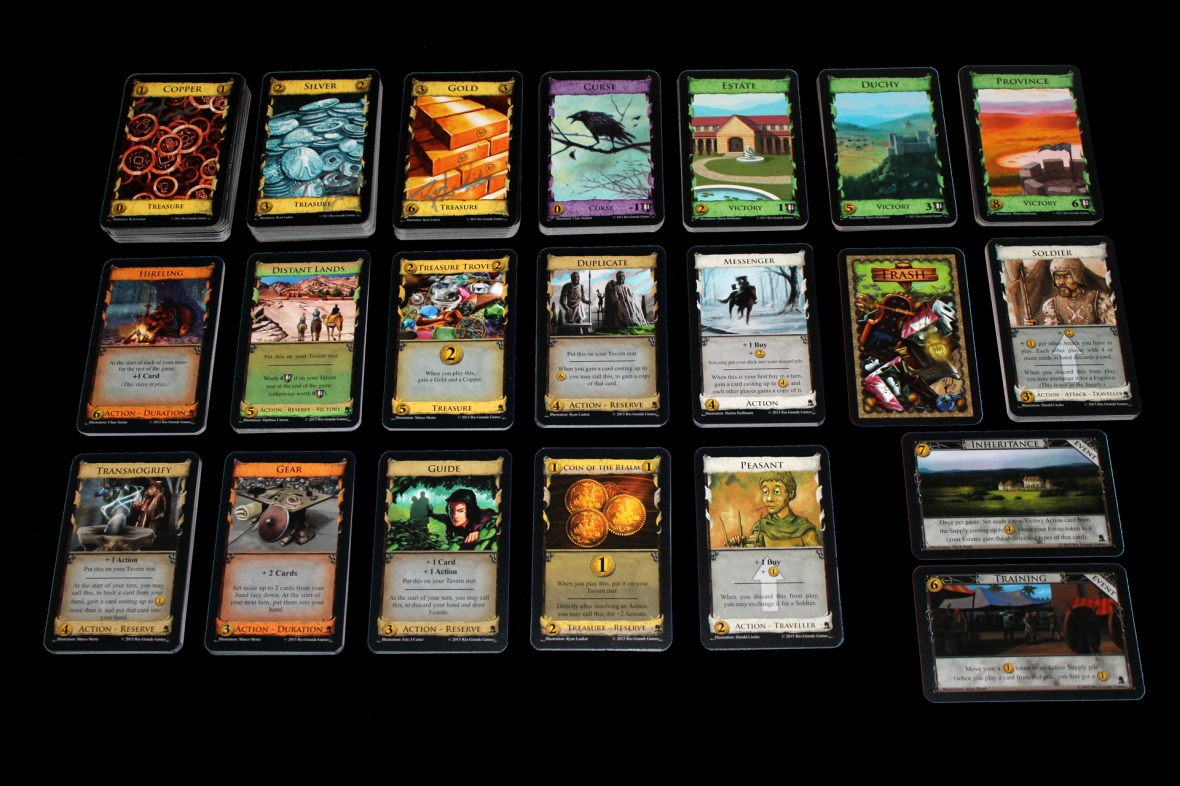 This is probably the best photo of the Supply that I think I’ve taken. It’s so organized!

But you’re not quite done. There are still a few things that need taken out, namely these tokens and the Tavern Mats: 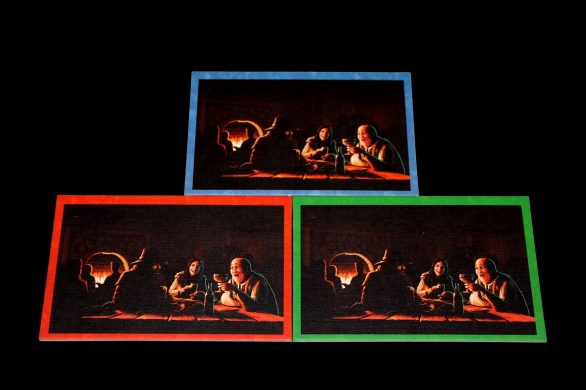 Give each player a set in their chosen color. Once you’ve done that, each player should take their deck of 10 cards, shuffle it, and deal themselves 5. If you’ve done everything correctly (and, to be fair, there’s a lot more than usual), your play area should look like this:

If you don’t know what a deckbuilder is, please see my Dominion or Dominion: Intrigue reviews for a brief (ish) explanation.

Now that you’ve done that, we can talk about Adventures. So, as promised, there’s new stuff. As you might guess, those brown cards are something special, namely Reserve Cards:

Basically, they can be placed on your Tavern Mat during your turn if you play them and then called later on a subsequent turn (provided you meet their criteria) for a special effect, usually. They’re pretty useful since you can rely on them happening later in the game, rather than needing to think about them now.

Either way, your turn has two phases: the Action Phase and the Buy Phase. During the Action Phase, you can play one Action card. During the Buy Phase, you can reveal and play Treasure Cards (which may go to your Tavern Mat, a la Coin of the Realm) and then buy one card from the Supply (the Kingdom cards + Treasure cards + Victory cards + Curses), provided you can pay its cost (bottom-left number).

All cards have a title (top), a cost (bottom-left), and their type or types (bottom-center), but their effects are different, as you’d guess, since there are so many different types of cards. Generally, Action cards will have some effects (in addition to extra text, if necessary):

If you have no +Action cards, you only get to play one Action card before your Action Phase ends. Action cards that lack a +Action are generally referred to as terminal Actions, and you generally will see a reasonable number of those in every set.

New to Adventures as well are Tokens:

These tokens allow for a variety of things. For the circle tokens, the + and – things are relatively obvious in their intent, but certain cards let you place those tokens on Action card stacks in the Supply, meaning whenever you play that card, you get that bonus effect. As you might imagine, that’s pretty good. The picture tokens are (left to right): Inheritance, which is an Event card that allows you to turn Estates into any 4-cost-or-less Action card, Journey (hence the boot), which is used for a few cards, and the Trashing token, which lets you trash a card from your hand whenever you gain a card from its pile. Those are handy to have around, as well.

Now, the Clean-Up Phase. As mentioned previously, discard every card (actions, treasures, etc.) in front of you from play (except for Durations that are still in effect) and discard any cards left in your hand, and then the next player takes their turn and so on / so forth until the game ends. But how does the game end?

Note that the second case includes Coppers, Silvers, Golds, Curses, Duchies, and Estates, as well as the normal Kingdom cards. Now, count how many Victory points you have among your cards, and whoever has the most points wins!

For Adventures in particular, I think it matters even less if you have more players since there’s no real shortage of Event Cards, and those are just an extra thing to buy. Sure, it makes Champion a bit better (since there are likely to be more Attacks if there are more players), but other than that I can’t really think of anything in particular that more players would help or hurt (other than generally kind of slowing the game down as the number of players increases, from my experience).

There are a ton of cards in Adventures (especially counting Events), so apologies in advance for a lightweight approach to strategy. As always, if you’re looking to go deep, I recommend the DominionStrategy wiki. 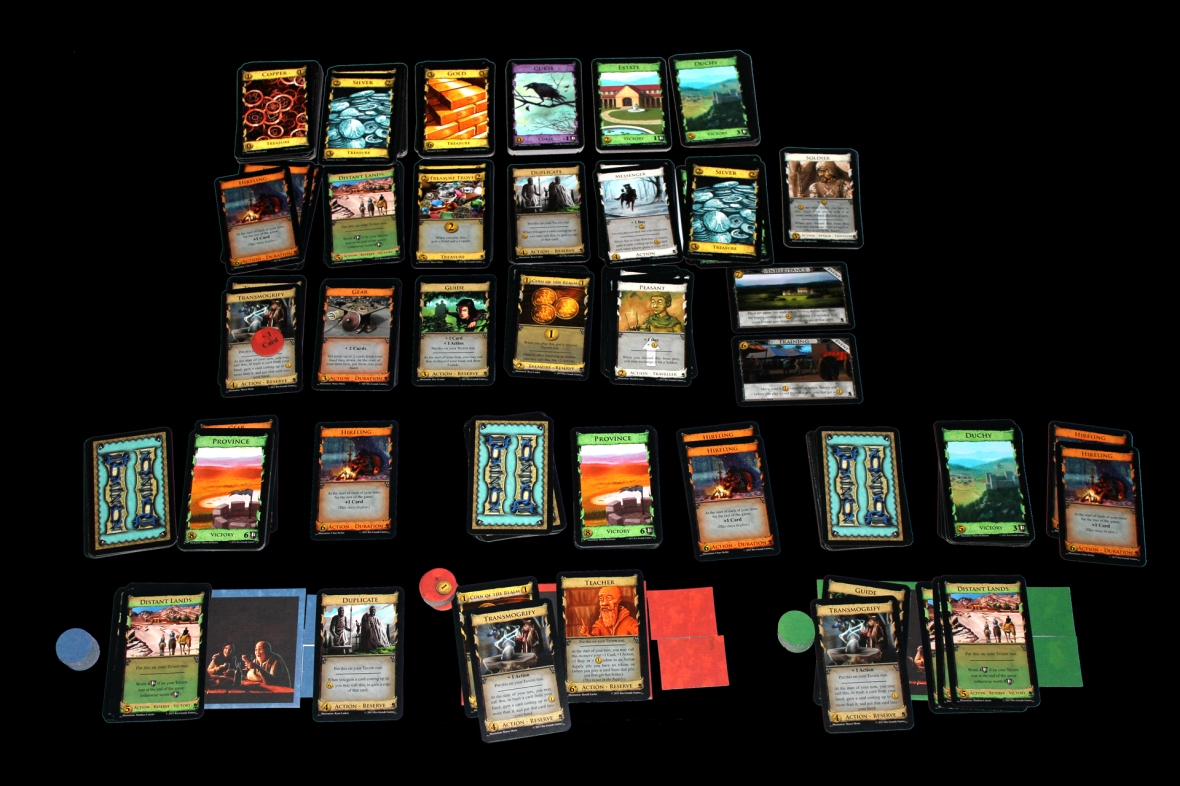 Overall, Adventures is a solid set! I like the cards (and hate the tokens, but hey what can you do) and try to include them a lot (or at least Magpie + the Page cards) when I’m playing with other sets. Generally, I’d say this, like Alchemy and Empires, should be an expansion you pick up when you’re pretty much spent on Dominion expansions. It adds a lot of stuff, but also a lot of complexity. That said, it’s a great expansion, and if you’re looking for ways to improve Dominion, this’ll definitely do that.