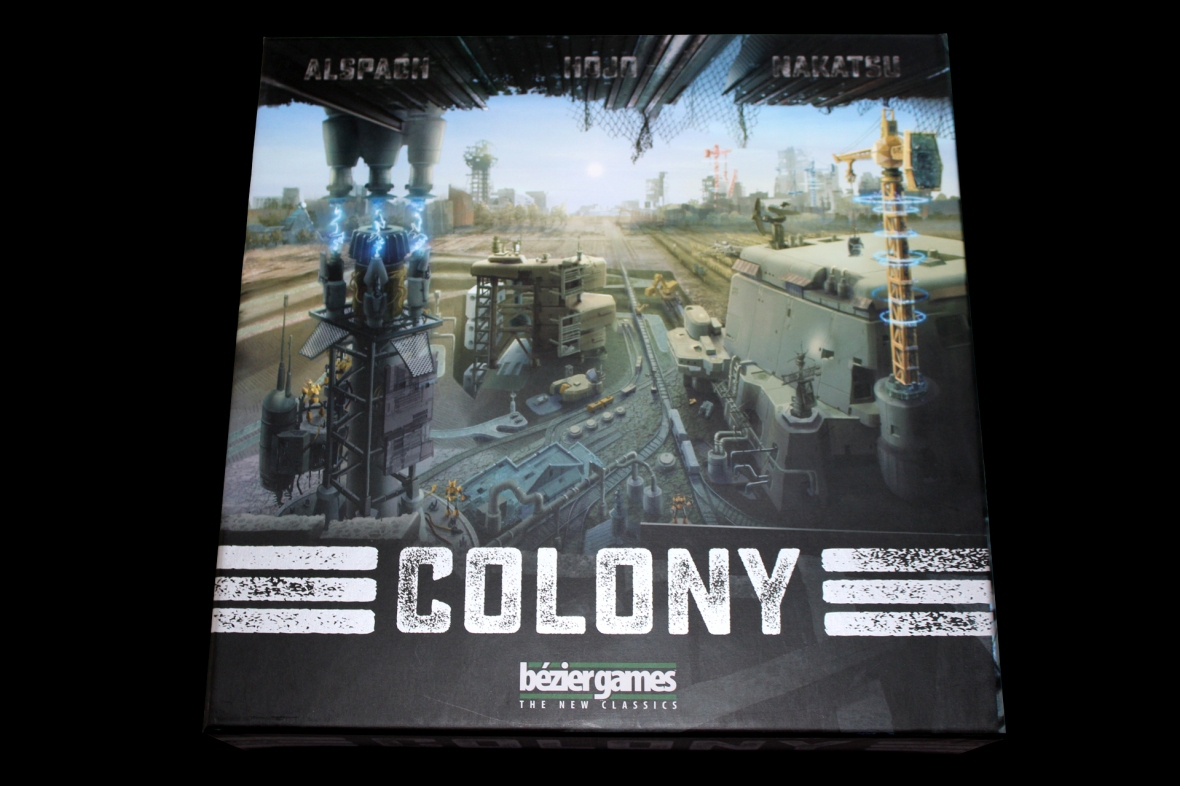 Let’s do something from Bezier Games, since I’ve been dragging my feet on Castles of Mad King Ludwig and Suburbia for literally over a year, at this point. Seriously, Castles was going to be like, the fourth or fifth game I reviewed and then I just … haven’t, yet. Still working on that. And Pandemic.

Colony takes place after one of the nanapocalypse, the nanopocalypse, or the ‘nanerpocalype, caused by one of grandmas, small robots going out of control, or, as Gwen Stefani predicted, bananas. Yes, B-A-N-A-N-A-S. I … might not have read the lore all that closely. Regardless of the cause, eighty years later you must rebuild so that life can continue. That said, you also want the best colony for obvious reasons, so you might have to resort to … less-than-scrupulous methods to prevent your opponents from getting the better of you. Can you lead humanity into a grand new age?

So the first thing you’ll notice is that, like Dominion, this game has a fair number of cards: 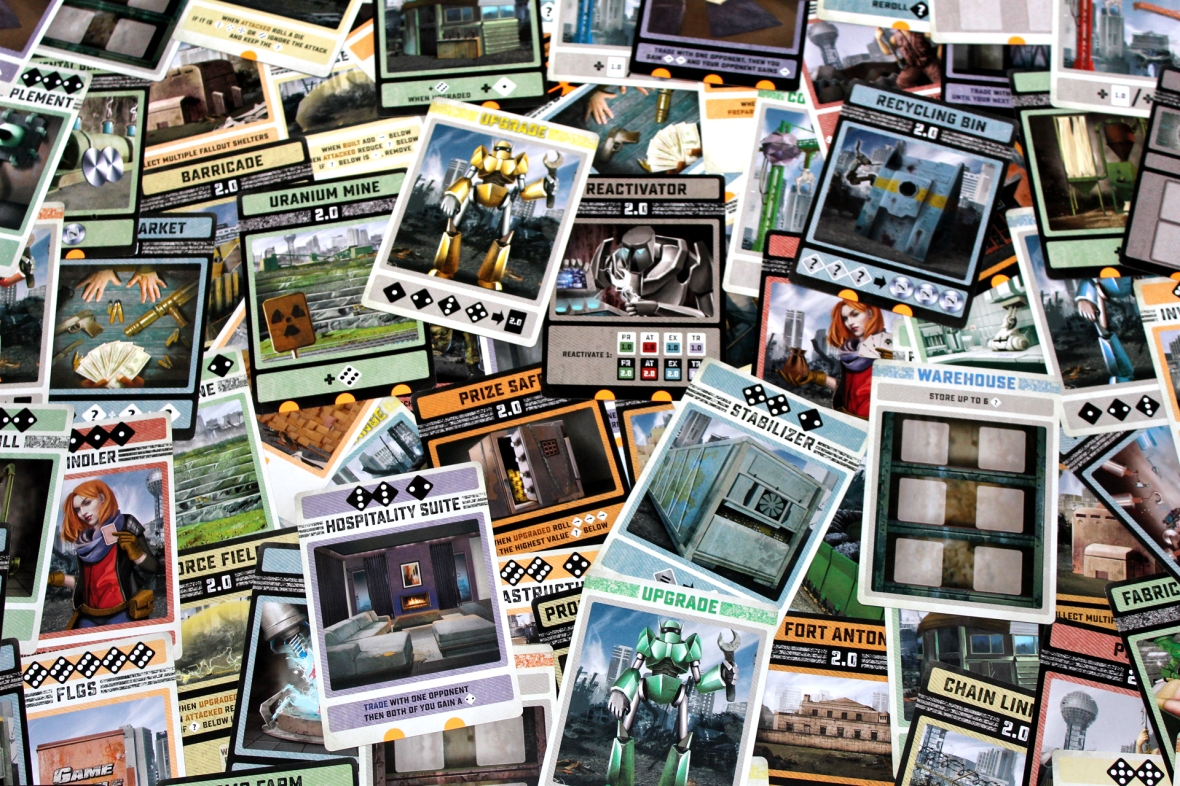 Also, it has a fair number of dice (in two colors!) and weird circle things called CHIPIs (or Cybernetic Holders of Instant Production Improvment — there will be a test on this): 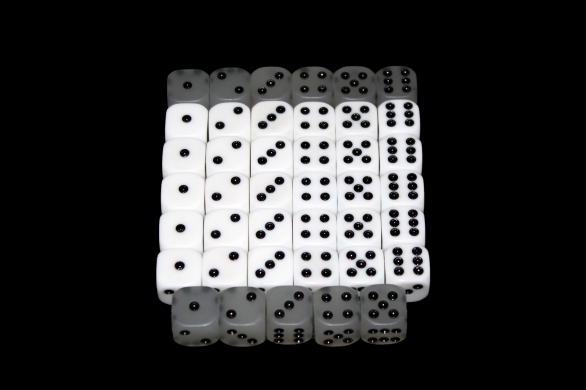 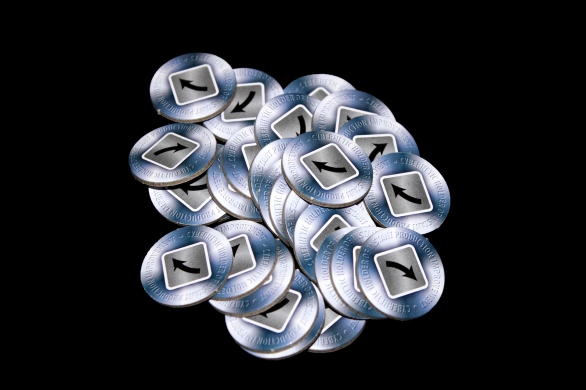 You’re going to want to set the dice and CHIPIs aside, for now, but keep the grey and white dice separate. White dice are known as stable resources, and grey dice are unstable. Also, set out the scoreboard and have each player start at 0.

Now, some of these cards are starting cards, and each player should get one with the white side up. I’ll talk more about the back / black / 2.0 side later on. 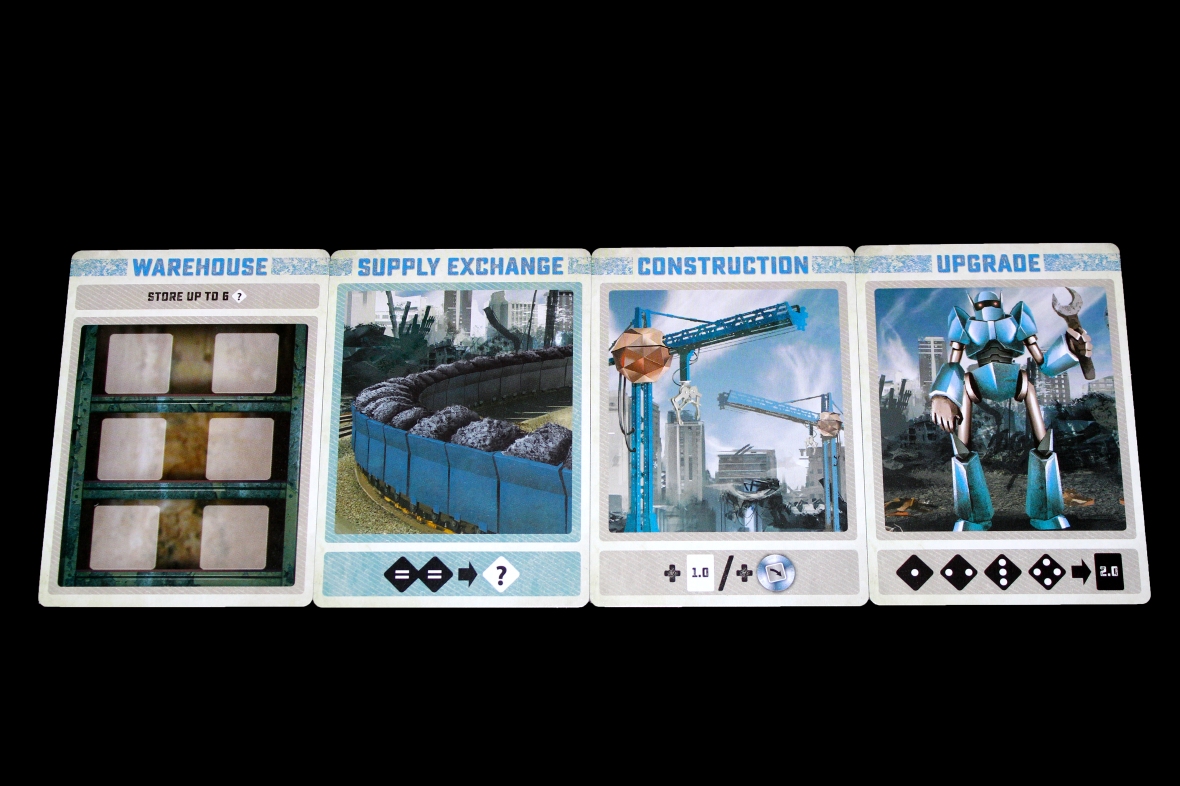 Some are basic cards, and should always be in play: 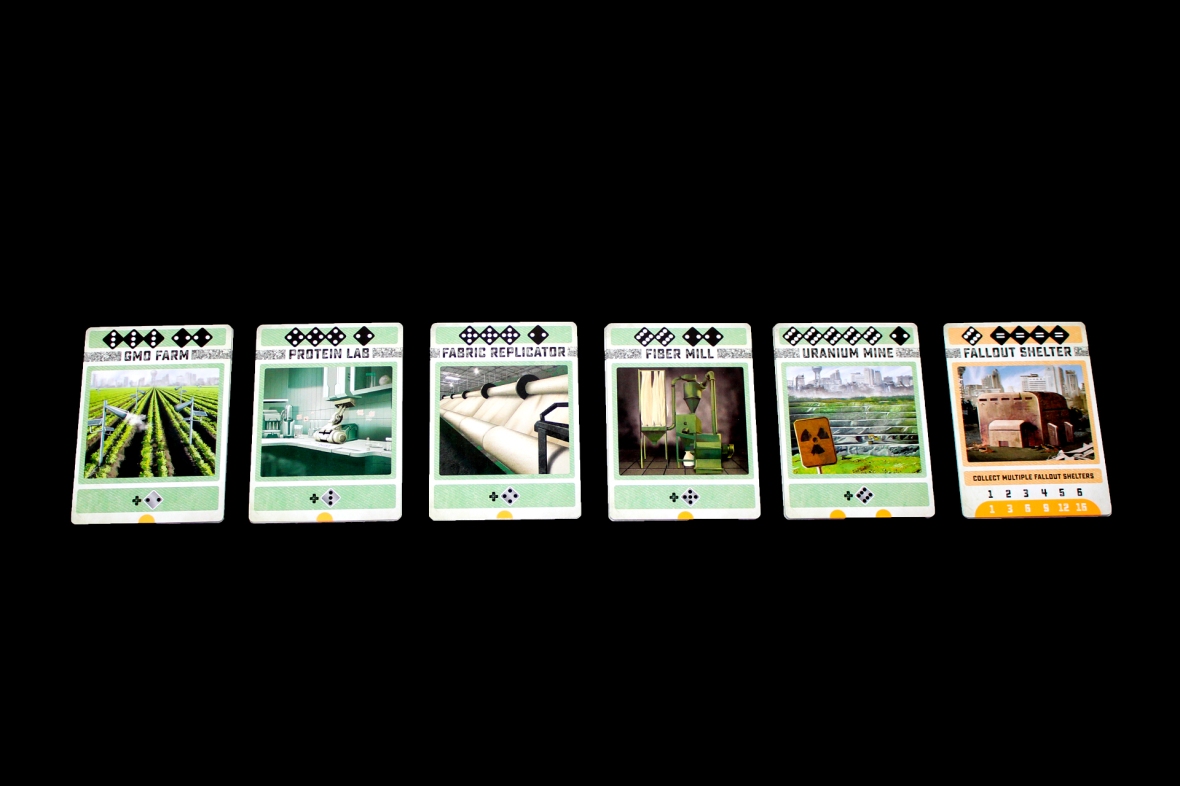 Those are the GMO Farm, Protein Lab, Fabric Replicator, Fiber Mill, Uranium Mine, and Fallout Shelter. Set those stacks out near the scoreboard.

Now, there are a ton of other cards, and those are Variable cards. I mean there’s a lot of cards, as I’ve said. It’s actually pretty similar to Dominion, in that sense: 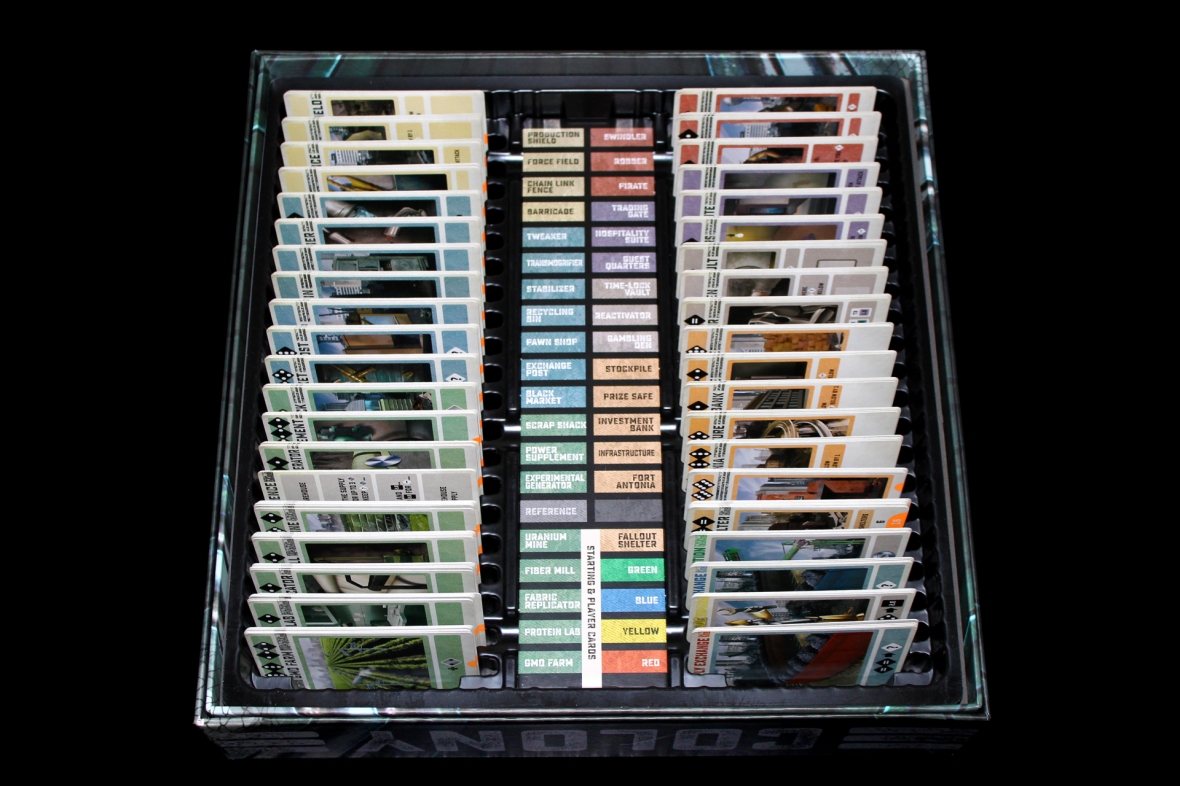 You need 7 sets of Variable Cards, so you can pick what you want or use the Colony card selector app, but here’s what I’d generally recommend:

Only use X cards of each Variable card set, where X is the number of players. This is just one of the rules, so it’s not a recommendation. That said, I forget it every time.

Note that if you’re playing more than one game in a row, let every player except the winner swap one of the in-play Variable cards for a set of their choice (from lowest to highest score). It’s a cool way to chain games together so that you don’t have to  readjust to a completely new set of Variable cards.

Anyways. Once you’ve done that, have everyone take three stable dice (white) and roll them. The player with the lowest sum goes first, and every player puts the dice they rolled in their warehouse.

If this is the first game you’ve ever played of Colony ever (or it’s someone’s!), flip your Upgrade and Construction cards to their back / black / 2.0 sides. This will also earn you one point, so every player starts at 1 on the scoreboard.

If you are playing with four players, give the fourth player a CHIPI. It’s to make up for them going super last. They only get this once.

Once you’re ready to play, the play area should look like this: 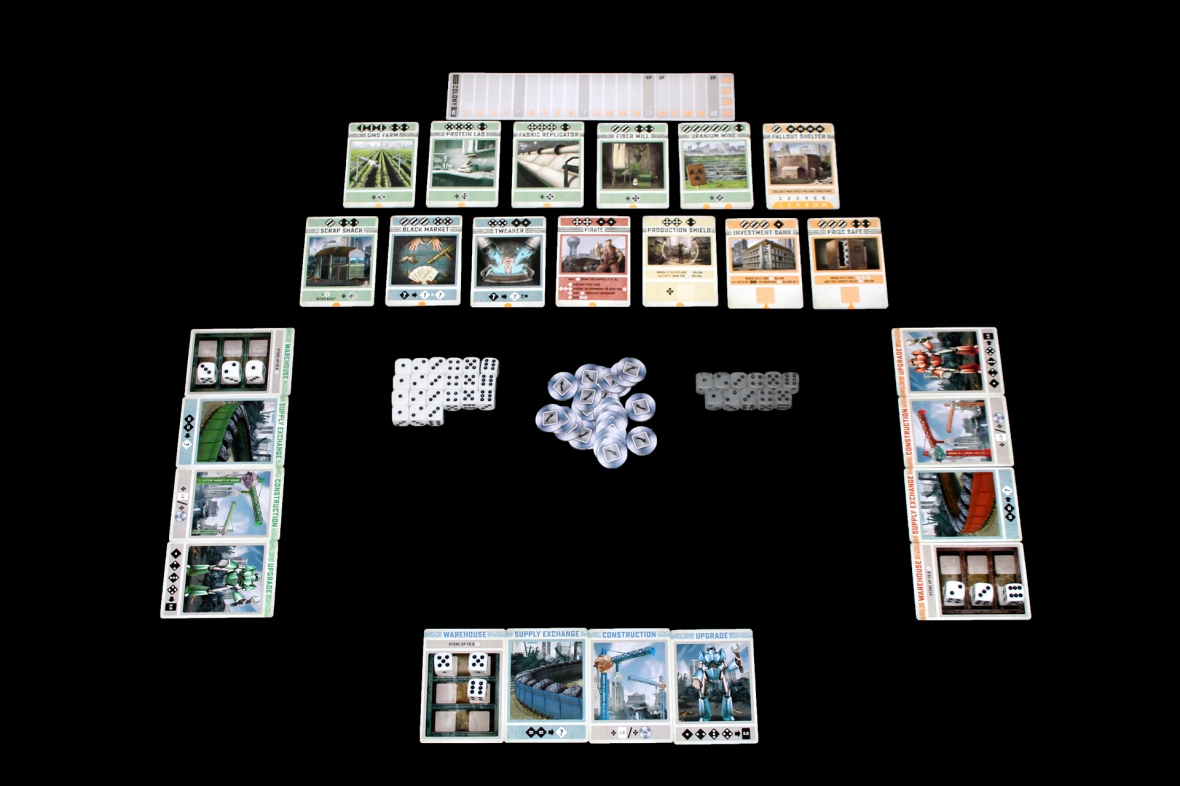 Next up is Scavenge. The active player takes three white stable resource dice and rolls them. They can also elect to use up to three CHIPIs to add one grey unstable resource die per CHIPI spent to that roll. You keep all unstable dice rolled and then draft the stable dice a la 7 Wonders, Between Two Cities, or Tides of Time. Note that in a two-player game this means you’ll get one of those dice back, and in a four-player game that means the player to the right of the active player gets nothing. If your Warehouse is full and it’s not your turn, you must either discard the die you draft or swap it out with a die in your Warehouse. Just a quick thing.

So, once you’ve settled your dice, you move on to the Activate phase. In this phase, you can activate any of your cards to use their ability. There are many cards with a lot of abilities, so I’m not going to enumerate over all of them. If you’d like someone to, please consult this rulebook PDF which explains them all.

A card that I will explain that you can activate is Construction. At its base level (white side), it’ll let you buy one card from the stock for the resource cost that it shows. You can spend stable or unstable resources that you have to purchase that card and then add it to your supply area, but you cannot use / upgrade that card this turn. Generally, that earns you points, so move yourself up the scoreboard. If you upgrade the Construction card or start with it upgraded, you can buy as many cards as you can afford. If you buy nothing this turn, you collect two CHIPIs. (Note that upgrading cards is not building, so if you only upgrade on your turn, take two CHIPIs.) Also, if you upgrade a card that you haven’t activated yet this turn, you use the upgraded ability when you do activate it.

One last thing that you can do during your turn is essentially a final lunge. If the leader is X points ahead of you on your turn, you can discard one of your cards from the game (permanently, mind you) to gain X stable dice and immediately roll them. If that card you discarded was worth points, you lose those points, but you lose them after you gain the dice. This is a great last-ditch effort to try and win the game, but you can only do this once per turn, for obvious reasons.

There’s also a solo mode, but it’s literally just “score the most points” with a slow timer mechanic (you put two of the three dice you roll back in the box each turn). It doesn’t seem as interesting to me as other solo modes for other games (such as Curse You, Robin Hood!; Wordsy; or Valley of the Kings, which are among my preferred solo games at the moment) so if I were playing solo I’d just play two players and fight myself. I do that for Dominion from time to time because, well, I have friends they’re just busy sometimes.

No, I don’t want to talk about it.

Despite it being a dice-heavy game, there are a lot of different strategies / luck mitigation techniques you can do to help yourself, similar to Roll for the Galaxy. 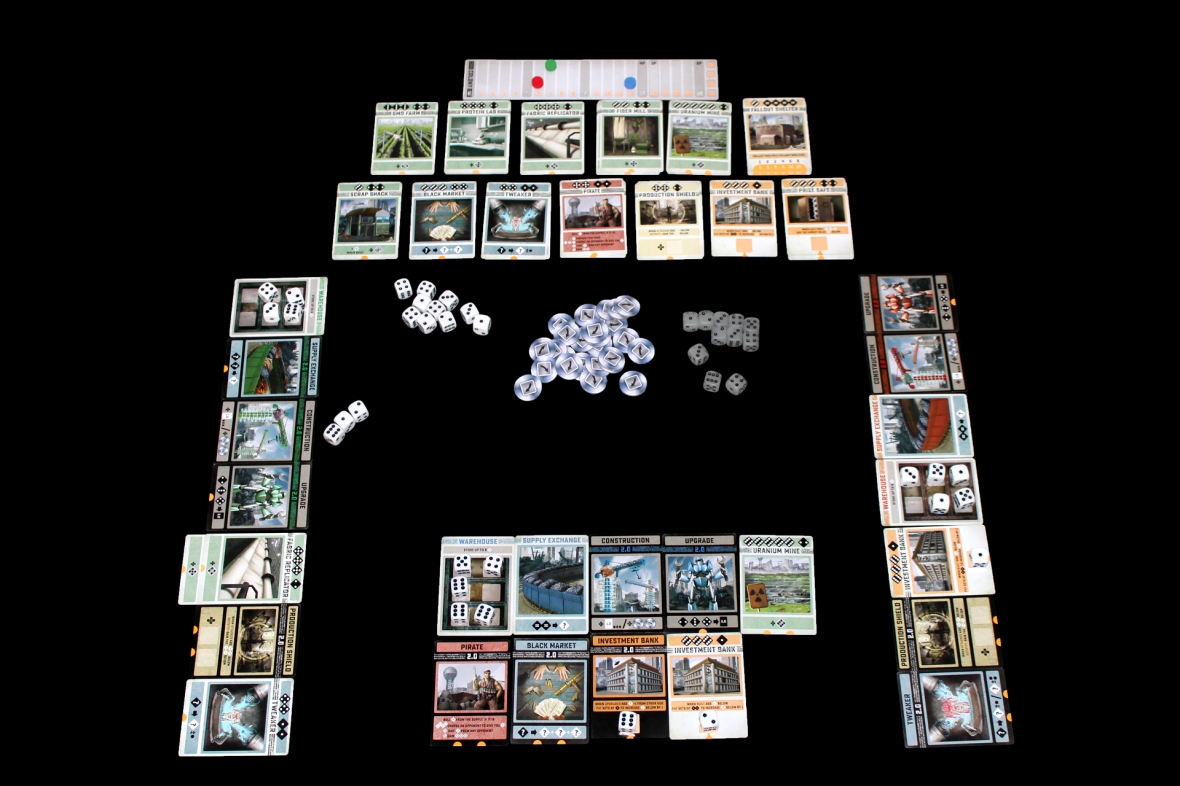 Overall, I enjoy Colony a lot! There are some things I don’t like as much (attacks, generally), but I have the same issues with other modular games and just opt to play without them. I like the dice throwing, I like the tableau building, and I like the variety of strategies you can utilize to get you there. At $60, it’s kind of expensive, but it’s a game I’ve enjoyed and would recommend to others to check out. Plus, given its modularity, I’d hope for an expansion sometime in the near future. Would love to see what’s next for Colony.