Full disclosure: A review copy of this game was provided by the designer, Behrooz Shahriari.

So I’m always on the lookout for fun new party games, but they’re egregiously difficult for me to review. For one, I have to have 3-5+ people together in one place and then I have to convince them to try a new game (which is, in part, why Captain Sonar hasn’t been skyrocketing up my review queue — it just takes so much effort to get people together for it!). That said, every so often I find a new game that’s just in the right spot, the right place, and the right time that I can get people to play it.

Enter In A Bind, a party game with a bit more physical constraints than, say, my normal go-to party games (like Spyfall or Anomia). If I had to describe it succinctly (which, as you probably can guess, is hard for me), I’d almost call it … card game Twister? Almost. I’ve liked it enough that I’m breaking from my usual norm to actually review both the base game and the expansion at the same time. If any of that intrigues you (or if you’re already reading this because I posted it), keep reading to find out more!

Uh, so setup is kind of disastrously easy. This is going to be a really short review, so I should be able to bang it out pretty quickly. So you have a deck of cards, like this one: 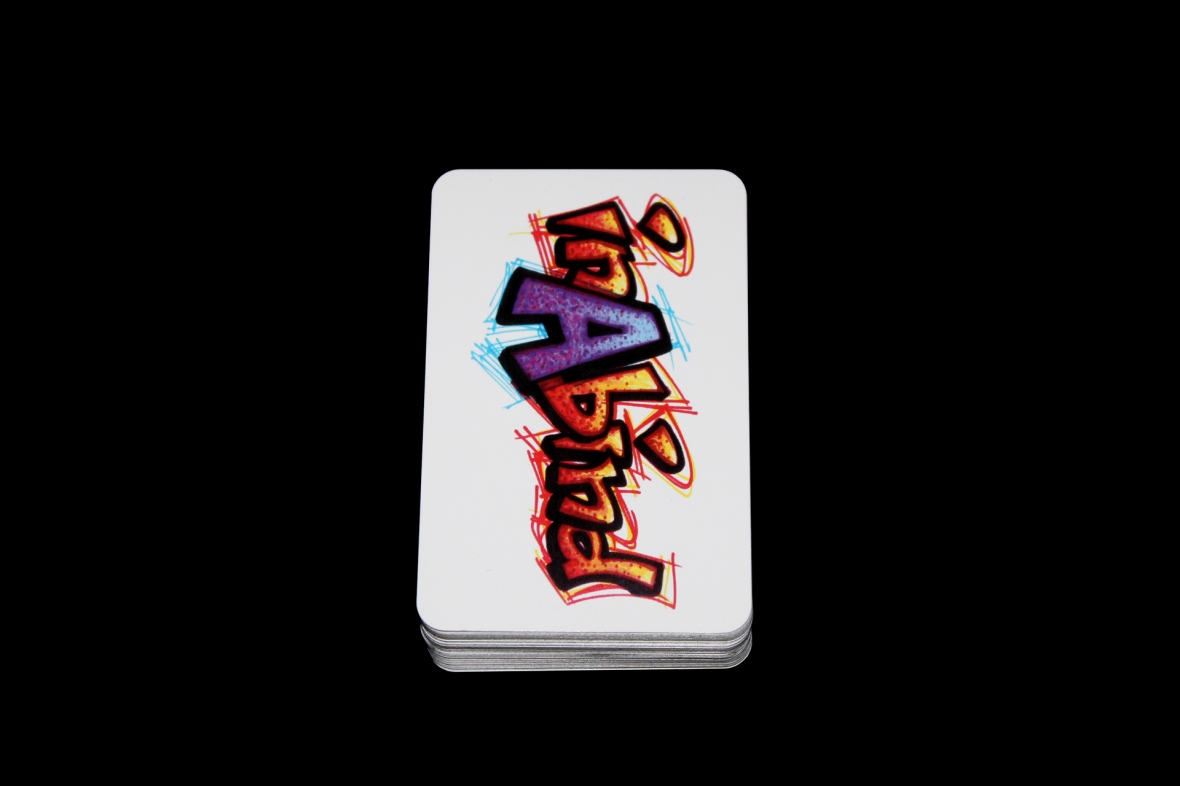 And you just kind of shuffle it and then put it in the center of your table, like so:

And you’re ready to start. See? Nobody strained themselves. If you’re playing with the expansions, you might want to run through the cards and remove anything that doesn’t particularly interest you, as there are four different modules in the expansion deck. Once you’ve done that, shuffle those in too!

Once you draw it, it’s now a rule applying to you. And then you do it, like so, for the rest of the game:

But how’d you take this photo?

I’d post pictures of other people performing the actions, but … they all refused to be photographed, so … here we are. You’re stuck with my interpretations.

If at any point you are no longer following the instructions of all of the cards you’ve drawn, you’re out. Relish it, and then take your time either making fun of the people who are still in, taking embarrassing photos (with their consent!), or judging to make sure nobody’s sneaking a break between turns. Last player out wins!

There is another mode called “Slow n’ Sadistic”, in which you choose which player you want to play cards on. If you are picked, it’s then your turn. This can effectively devolve into a grudge match between two people, which is also funny? We’ve also tried to make a drinking game where you also lose if you cannot take a drink of your drink on your turn, but that has a high likelihood of making your cards or table messy (just due to spillage), so perhaps don’t do that.

Again, in any game mode, last player out wins!

So there’s also the expansion, and it has four different modules:

Wild cards: Cards where other players specify part of the effect. Those typically look like this: 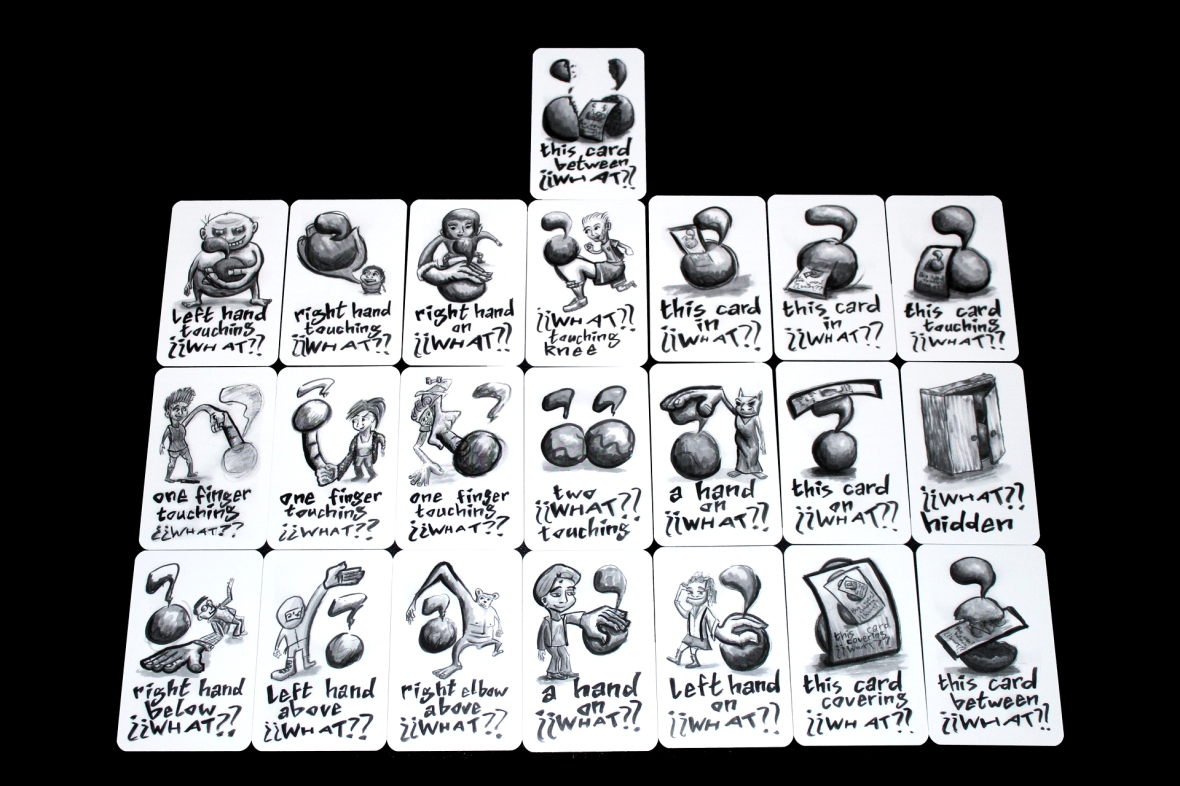 And the player on your right specifies what the WHAT?? is. It can be literally anything, so hope they’re feeling generous. Just, try not to make other players uncomfortable?

Communal cards: Cards where everyone must do something when they individually draw / play a card, like so: 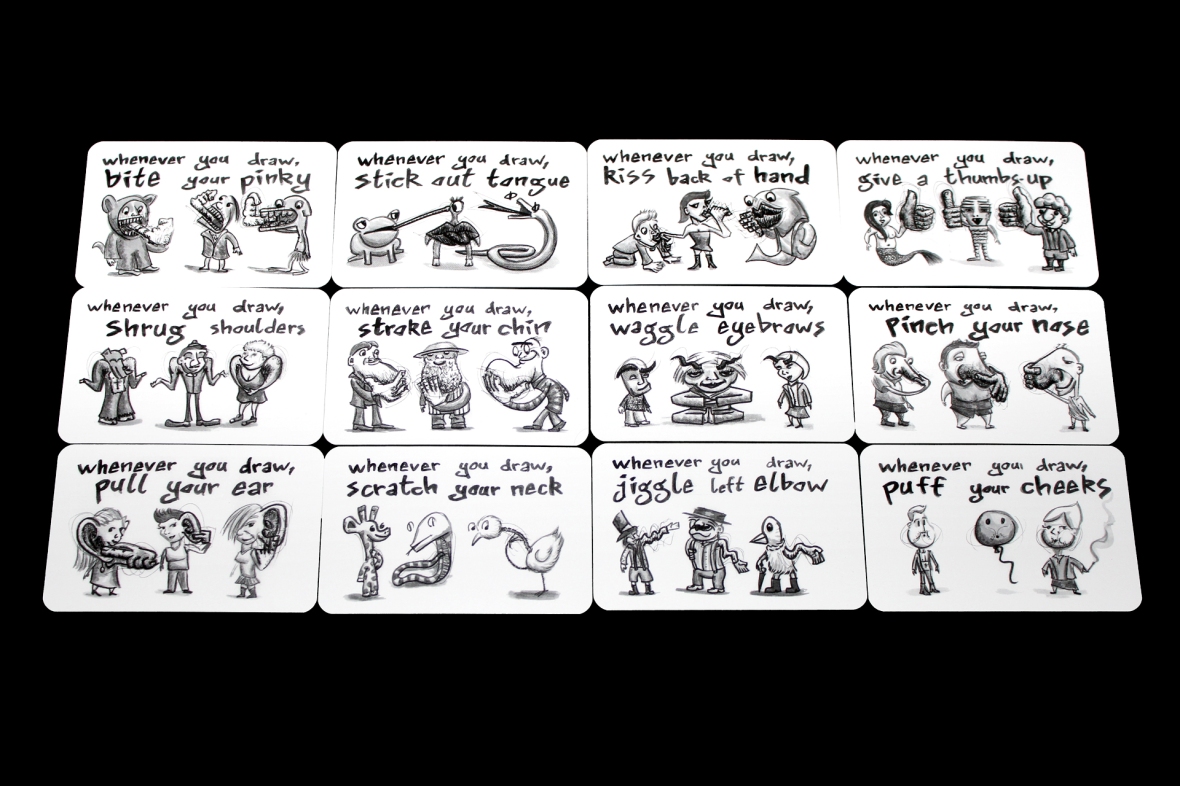 I originally had these listed as physical cards, but that was incorrect — the key insight here is that these affect all players, so you might have to do something on your turn before you’ve even drawn a card!  These go in the center where everyone can see them. Honestly, they’re kind of hard to remember sometimes, but no big deal. Better that than one of the tough original cards.

Speech cards: Cards where you must say something when you (or someone else) draws / plays a card: 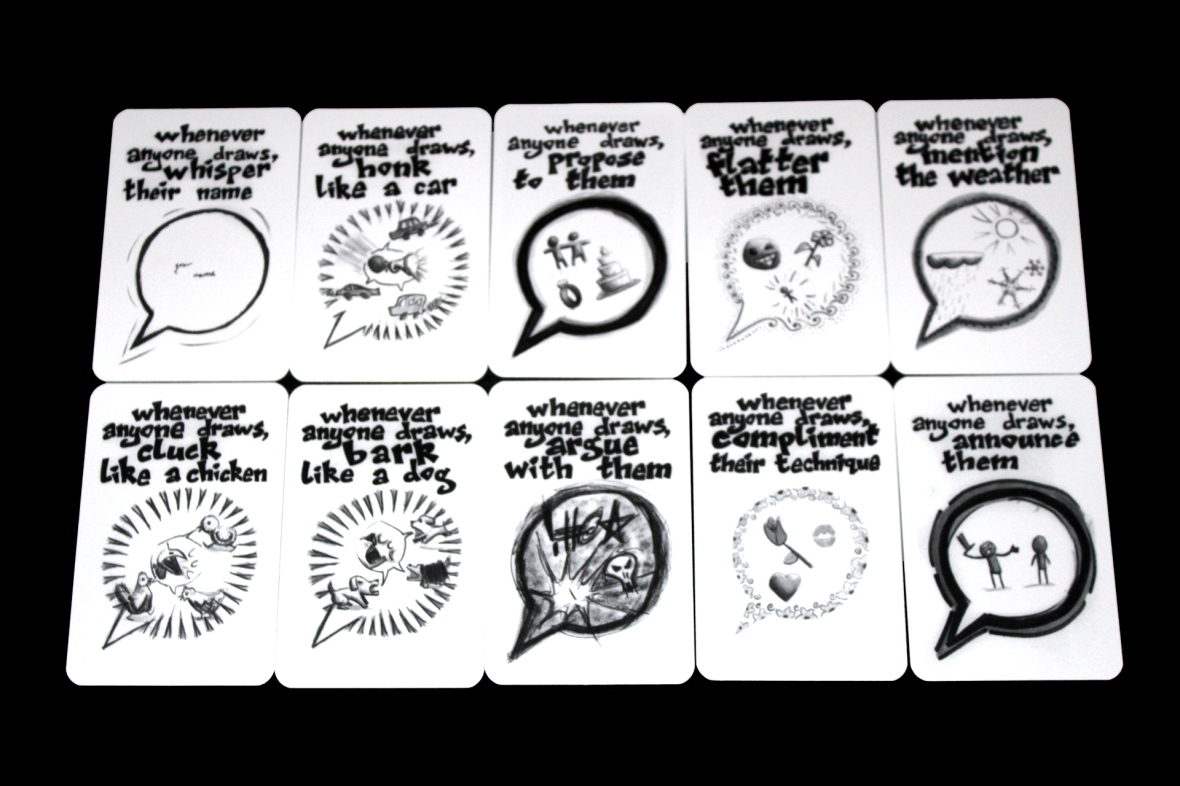 These can be funny.

Physical cards: Cards where you have to do something whenever anyone draws / plays a card:

Note that this doesn’t apply to you playing a card if you’re playing the Slow n’ Sadistic mode, since you might be playing a lot.

You can take out any cards you don’t particularly care for (I remove the arguing cards because I just don’t feel like listening to it). Personally, I find that I play with the rule that each player can have a “When you draw” and a “When anyone draws” card, and beyond that it gets a bit irritating because they’re just kind of chaining together nonsense noises. We’ve done a “swap your effect cards out when you get new ones” and found that that mostly works, but feel free to try and fine-tune the deck to get the right balance for you and your group. I’d also personally drop the “card in armpit” from the base game, but that’s because I haven’t sleeved the cards yet and I don’t want them to get gross.

None. You just have more people looking hilariously silly. Doesn’t really have any scaling issues. I’d play it with 2 or more people. Playing it with one person seems … kind of sad? But I’m not here to judge.

Hah. There’s no strategy here, except for one thing: 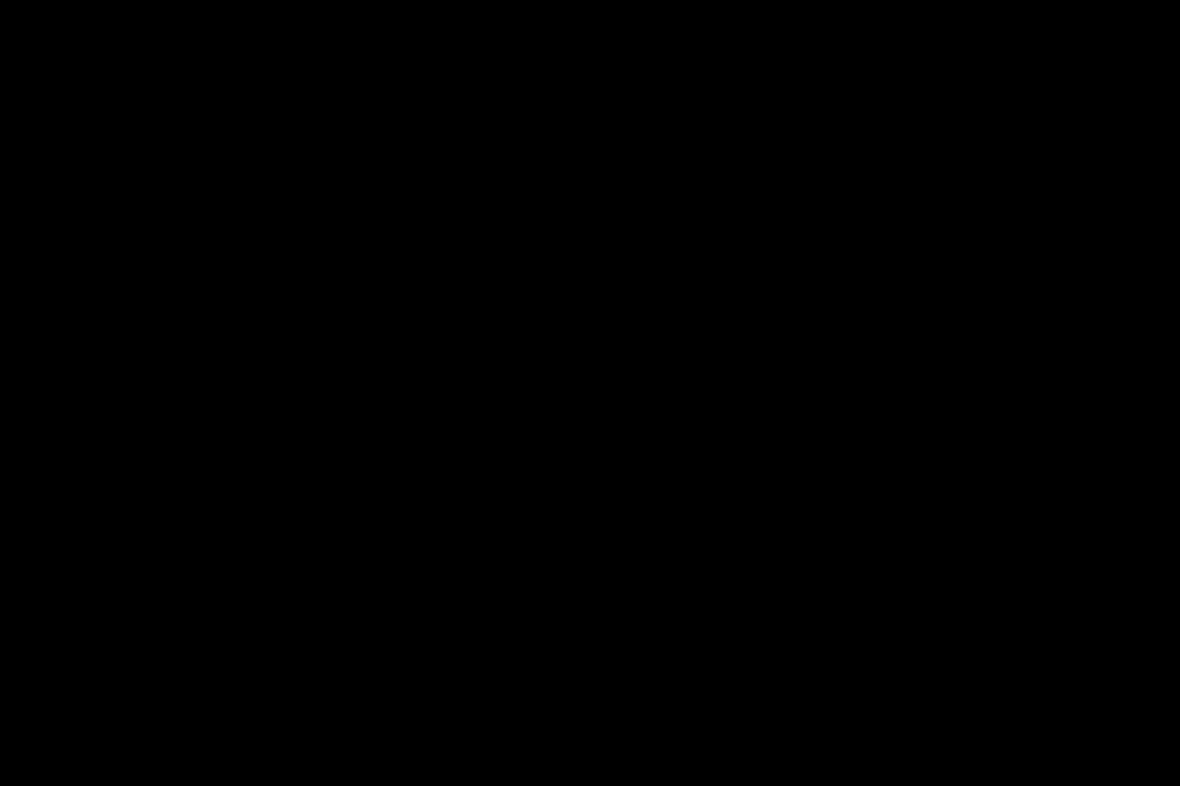 A photo of my friends playing the game! Or a black screen because I couldn’t get them to agree to having those photos posted. Alas.

Overall, I like In A Bind! I think the expansion adds a lot to the game as well, but I generally try to add the expansion cards once someone’s already played a game. I think I’d recommend them one module at a time, max, probably, just to not overwhelm the deck (except for the wild cards, which are totally fine to add in just for kicks). Generally with a deck I’ll get three games in, which is about the right amount to play in a session. It’s a great little party game that’s a brilliant concept and a solid execution. Oh, and it’s super portable, so it’s got that going for it too! I’d recommend checking it out — I’ve had a lot of fun with it.