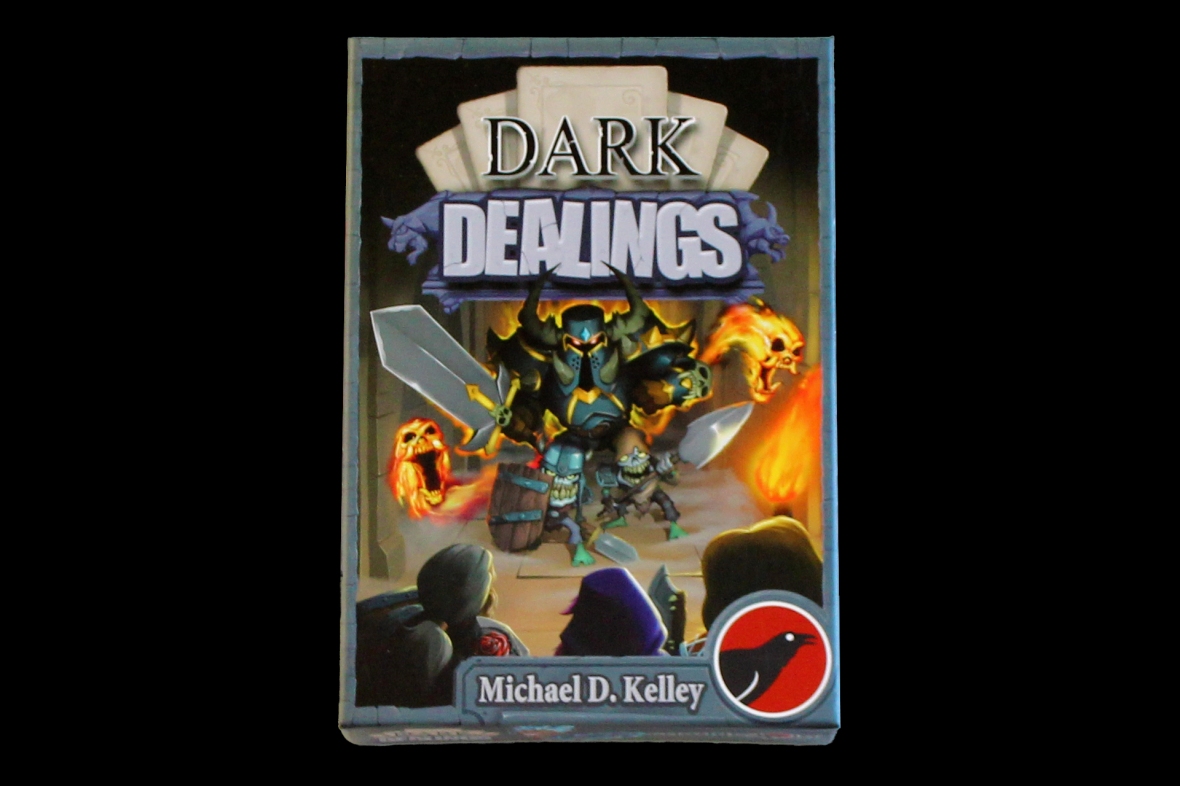 Full disclosure: A review copy of this game was provided by Nevermore Games.

Being evil is vaguely in vogue these days, so why not give it a whirl? In Dark Dealings (another recent Kickstarter success), you find yourself one of a cohort of evil overlords, having spent your free weekends destroying villages and ravaging countrysides. However, the villages are a bit sick of you doing that, so naturally heroes have risen up (or been paid; who knows) in order to put an end to your evildoing. Or at least kick you out of your castle, which, you’ve almost paid off the mortgage on it, so that seems like a terrible option. Thankfully, you’re also in contact with the Dark Masters, which are beings of pure evil that exist outside of normal space and time. They’ve got the hookups to hopefully keep heroes out, provided you demonstrate how much you need their help. Can you survive the onslaught? Or will you be thrown out of your tower by a plucky hero?

Setup is pretty simple. There are only three things in the box. First is the first-player token, which you can assign randomly: 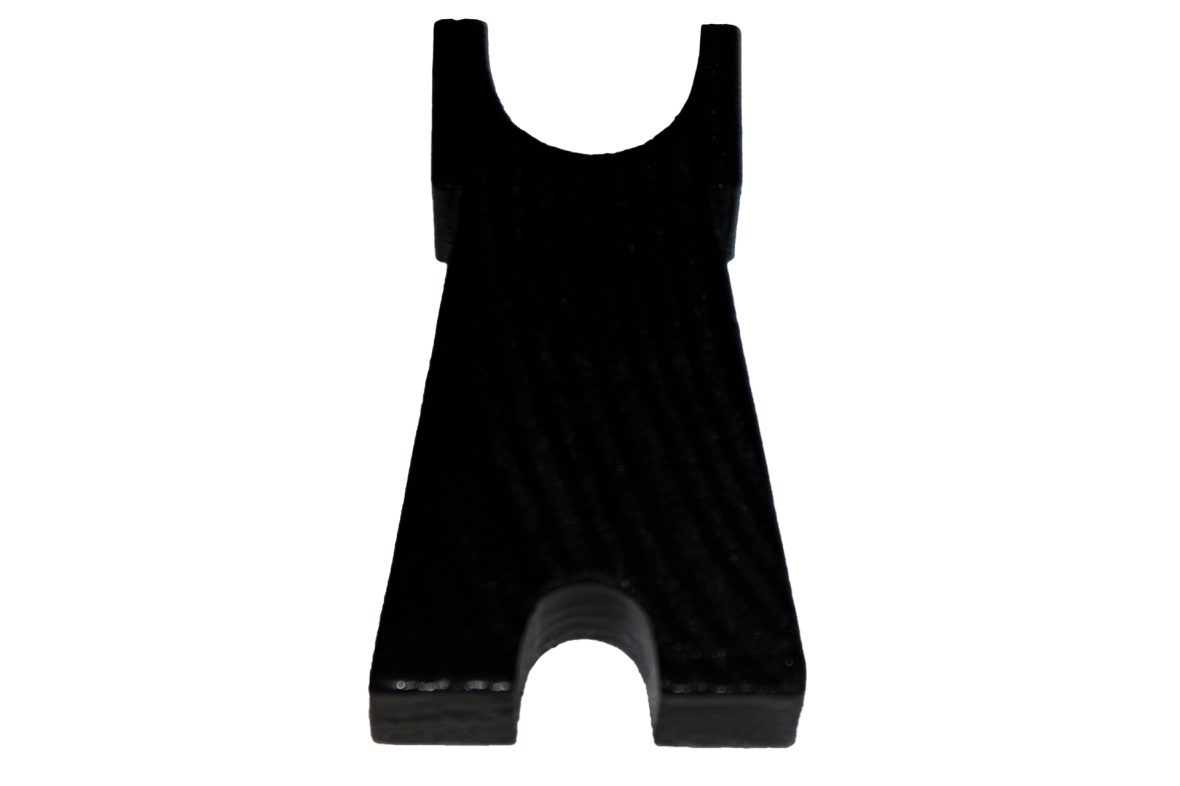 Next up are all the Hero Cards: 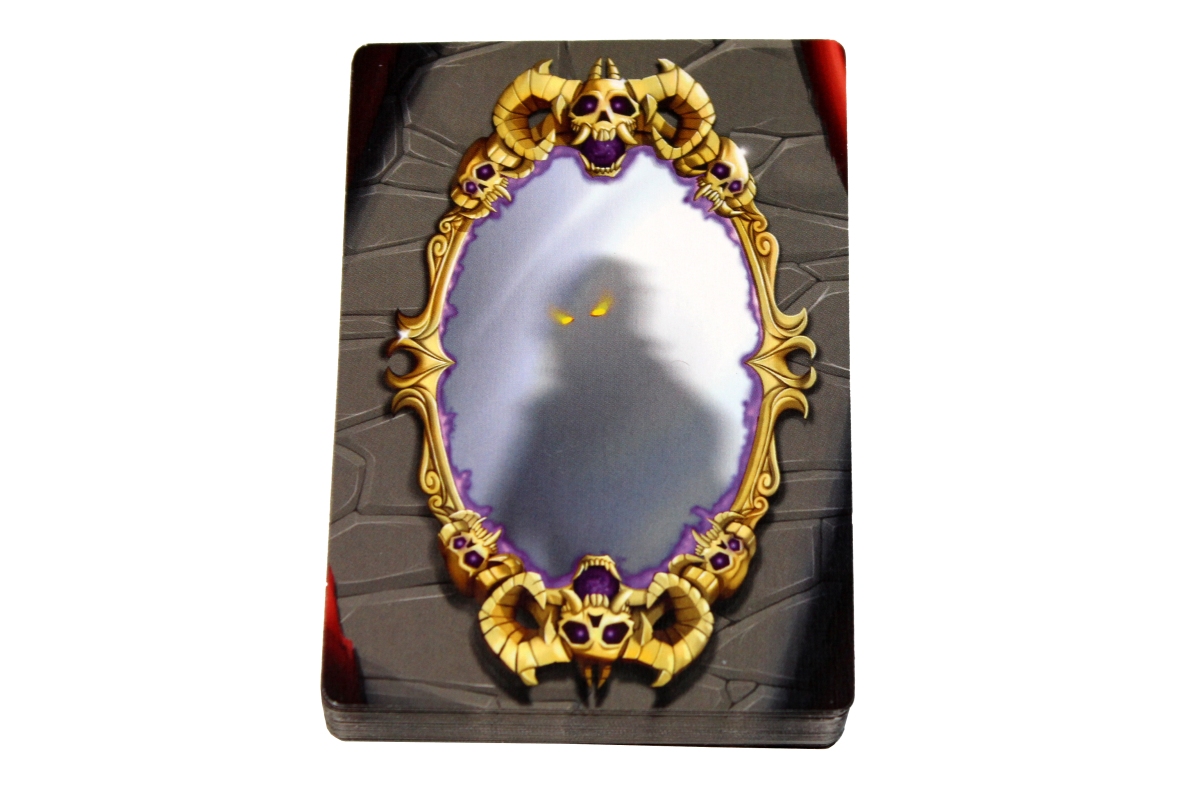 Shuffle these and deal nine to each player, unless you’re playing solo, in which case you draw three Heroes and discard one, and do that process four times.

Next, shuffle the Defense Cards: 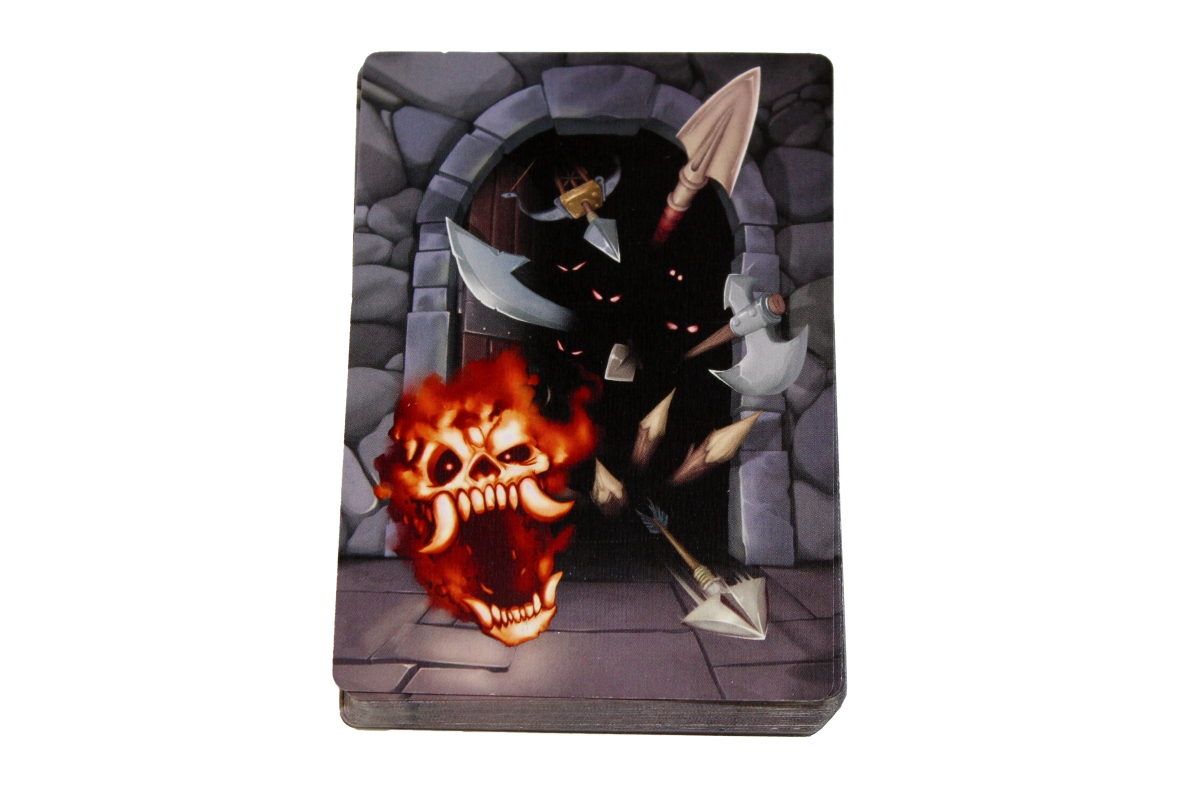 You’ll use those later in the game. Once you’ve done that, you should be ready to begin: 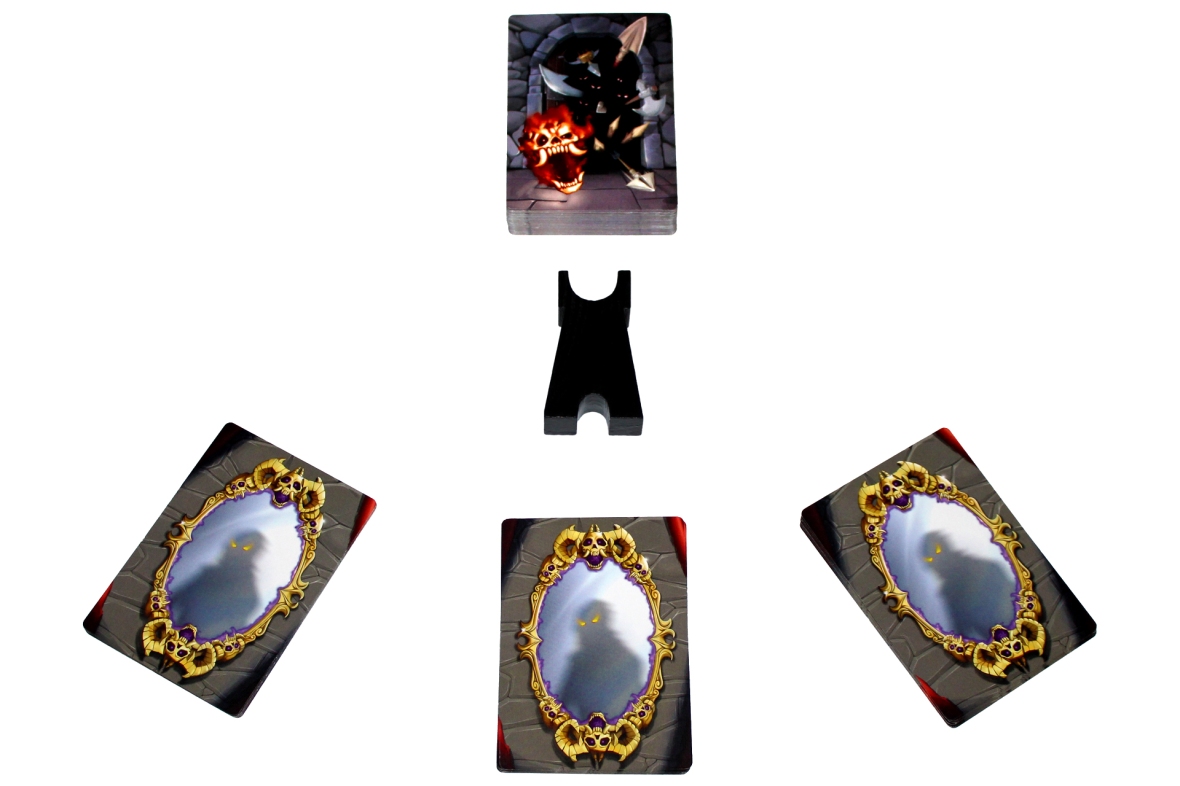 So gameplay is split into three parts: the Hero Phase, the Defense Phase, and the Combat phase, the first two of which primarily revolve around the Hero cards and the Defense cards, respectively. I’ll cover each part in turn.

During this phase, you’ll draft heroes (a la 7 Wonders or Between Two Cities) by looking at your current hand of heroes, adding two to a stack in front of you, and then passing the rest to the player on your left. There are six different types of heroes: 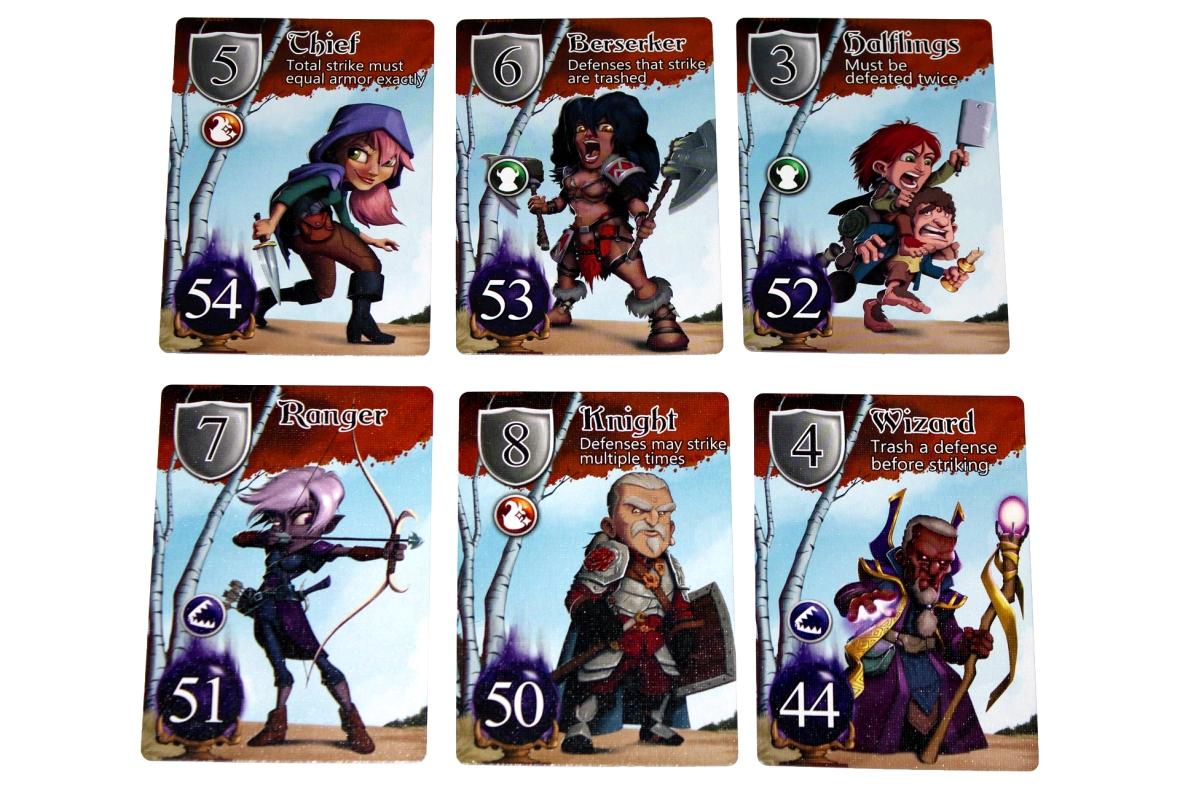 Once you have eight heroes in your pile, you discard the remaining card from the game, face-down.

As I mentioned during setup, you’ll just draw three Heroes and discard one, and repeat that until you have eight heroes in your pile.

During this phase, you use your Heroes to try and impress the Dark Masters, thereby granting you better traps and rewards. To do so, it’s important to know the breakdown of Hero Cards and Defense Cards: 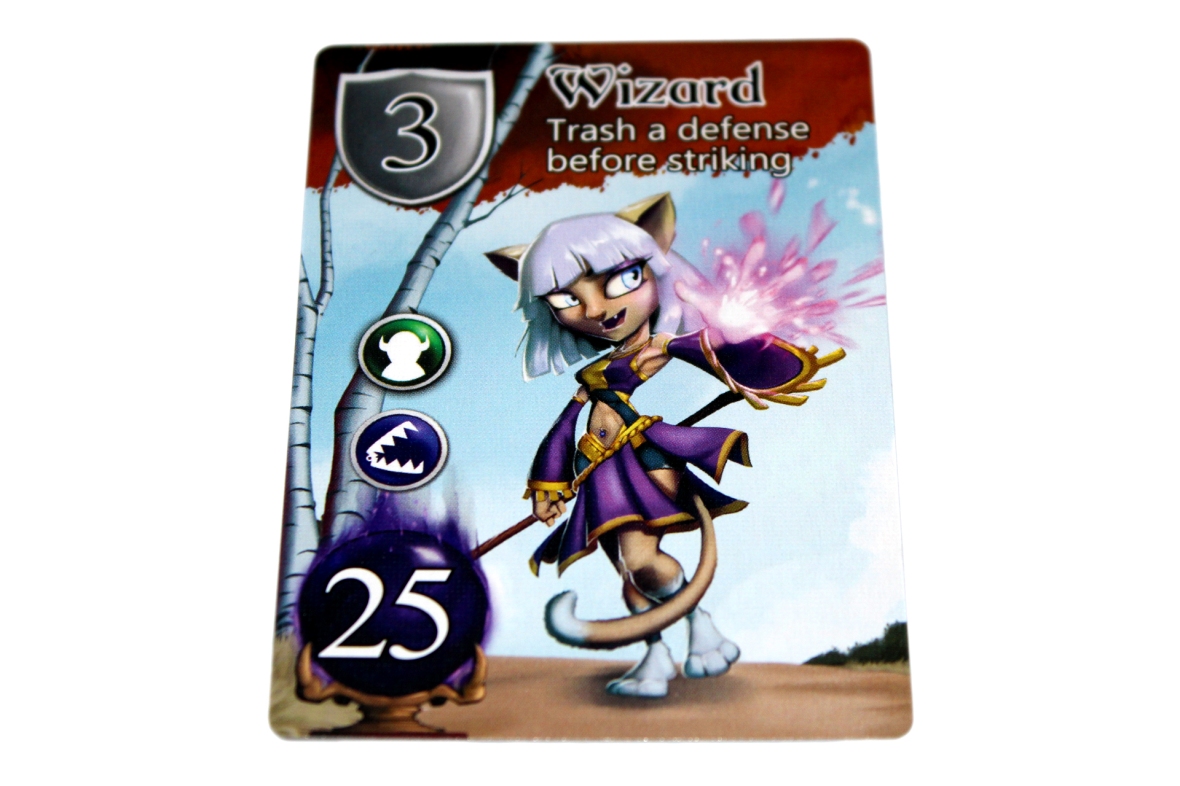 Hero cards have many attributes, in addition to their class: 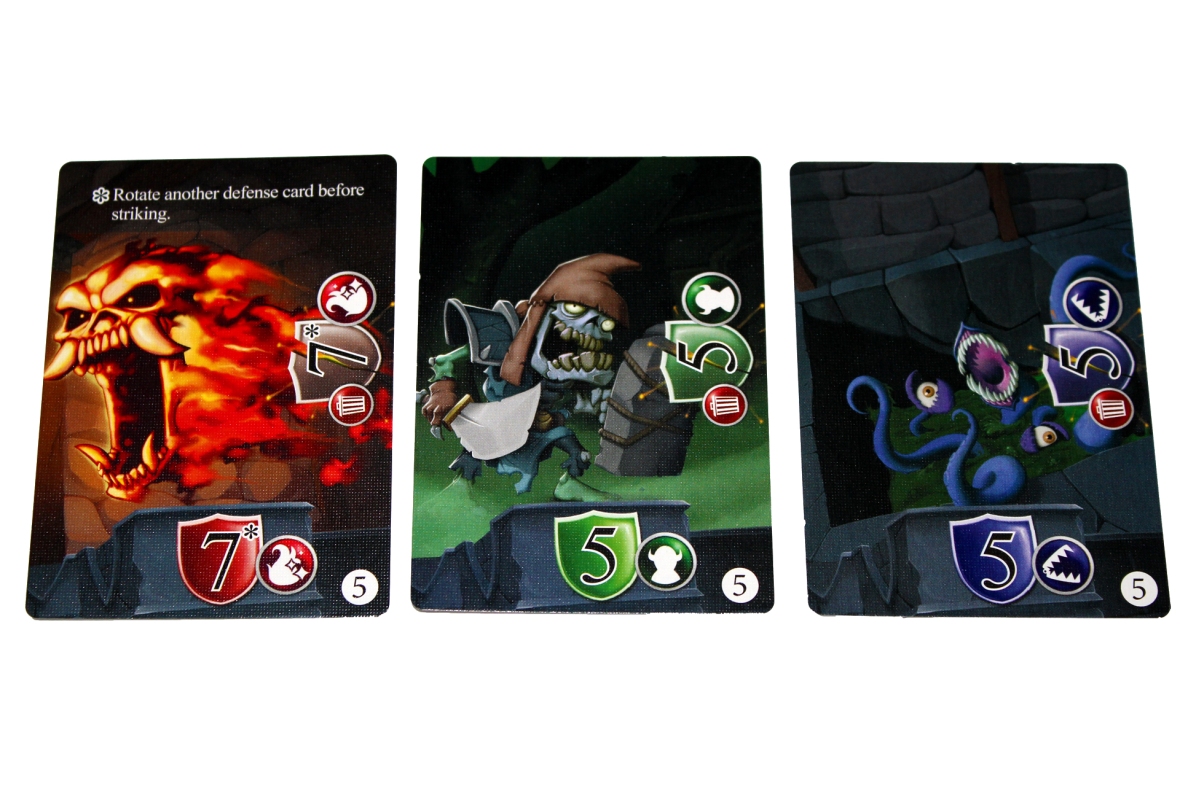 Defense cards have three main types – Red (Spells), Green (Minions), or Purple (Traps), and have special attributes as well. Each card has one or more strikes, which is a hit for a certain amount of typed damage. The gold cards often have strikes of different (or multiple) types, for instance. Every time you use a strike in the Combat Phase, you rotate the card to the next available strike. If you’re currently on the trash icon, the next time you strike with this card, it’s discarded from the game. In the corner of the card is also a rank, which is the relative strength of a Defense Card. Additionally, there are three special types of Defense Cards:

Now that you know what all the cards do, let’s talk about the Defense Phase for real:

During this phase, you’ll try to impress the Dark Masters with information about which heroes will soon come knocking at your door. First, you get to see which defenses are available, by flipping two cards per player face-up into the center of the play area. Next, you choose two Hero cards from your hand and place them face-down. Once everyone has done that, flip them face-up.

In order of Challenge Value (per hero), players can choose a Defense card and add it to their defense card stack, and then must put the hero used face-down in a stack and cannot look at the stack. This will be their Hero Deck for the Combat Phase.

Once all Defense Cards have been taken, repeat this process until no player has any Hero cards left in their hand. Each player should have 8 Defense cards and a deck of 8 Hero cards.

Similar to the non-solo phase, you’ll flip Defense cards and then bid for them with Heroes’s Challenge Values. In this version, however, you flip five Defense cards. You then choose your two Hero cards, but once you’ve done that you flip over another three Hero cards from the deck. Play proceeds normally, but every time it’s not your turn to choose, you discard the highest-ranked defense card. If there is a tie between ranks, discard the leftmost tied card. Simple. Repeat this process until you have constructed your Hero deck.

This goes for all games, solo or otherwise. You’ll want to put your Defense cards in front of you where you can see all of them. Then, starting with the first player, you’ll fight the top card of your Hero deck.

You can only strike with a Defense card that matches one of the types on the Hero card, and unless otherwise stated, you may only strike once per card per turn. If you cannot defeat the Hero in front of you, you are evicted and out for the rest of the game.

Note that all five Hero types have different effects:

Once an entire round has passed, play begins again with the starting player, unless they were evicted, in which case play starts with the first player to their left that hasn’t been evicted yet.

If any player is the only non-evicted player left at the end of a round, they win! If all players were evicted in the same round, the player with the most Defense cards left wins!

I’d say I think it’s best with 3 – 4, from my plays. I haven’t tried it much past 4, but at two you run the frequent risk (especially with new players) that they’ll make a mistake and draw a Thief that they can’t beat or something on their first turn, making the entire game a bit moot for them. It’s not the biggest deal, but it means the previous 10 minutes or so of gameplay can be brought down by one simple mistake, which can be pretty frustrating. That’s unlikely to happen to everyone at higher player counts, especially because you get to see more Defense cards. So I’d recommend it at three or more. Plus, there’re already a ton of great two-player games.

Having played the solo version a few times, I would also recommend that. It’s brutally difficult, but I enjoy it enough to play it. 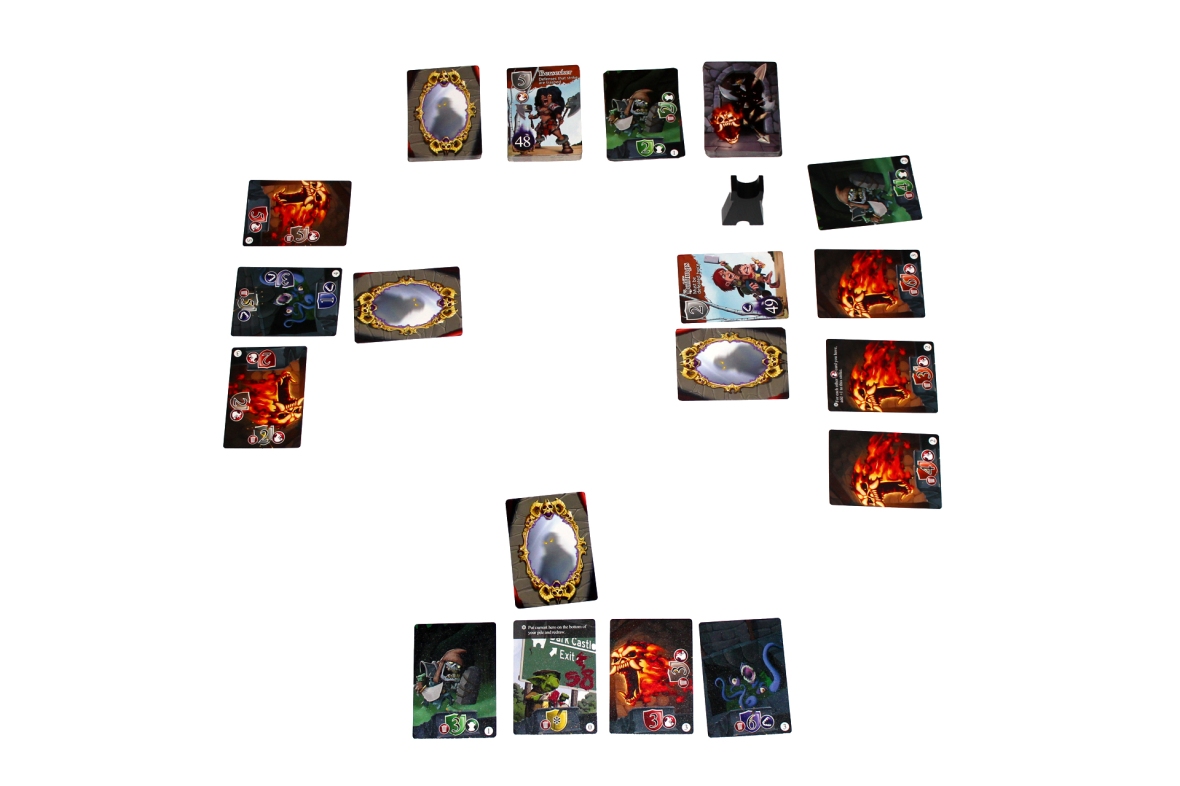 Overall, Dark Dealings is a solid short game. The memory element isn’t as much to my liking, but I’ve had a lot of fun in spite of that because it’s a short, simple game with some cool elements and some solid design. I’m particularly a fan of trying to figure out what the right proportion of high and low Challenge Values to shoot for during the draft (since it’s hard to apply a specific strategy across the board), but it’s also fun to see how different players prioritize different things when they’re taking cards during the Defense Phase. If you’re looking for a light game with a mix of a few different gameplay styles, Dark Dealings may be for you.