So, smoothies are great. I’m just offering this as a fact without citations or verification, since there’s really none needed. In Blend Off, you likely generally agree with me, as you are a professional blend person (Blendarino/a?) at a local smoothie place that’s just about to close. Your manager, Becca, and the “guy who gets you fruits” Kevin, come back with “terrible” news: there’s a line of people out front going around the corner, and you’re a minute from close. Becca resolves that whoever can make the most (and best) smoothies and clear the queue will get free smoothies for a month! She’s called a Blend Off — can you win?

So setup is actually pretty simple. You’ve got a bunch of fruit tokens:

Set out X + 2 of each, where X is the number of players. One of those fruits will be the durian: 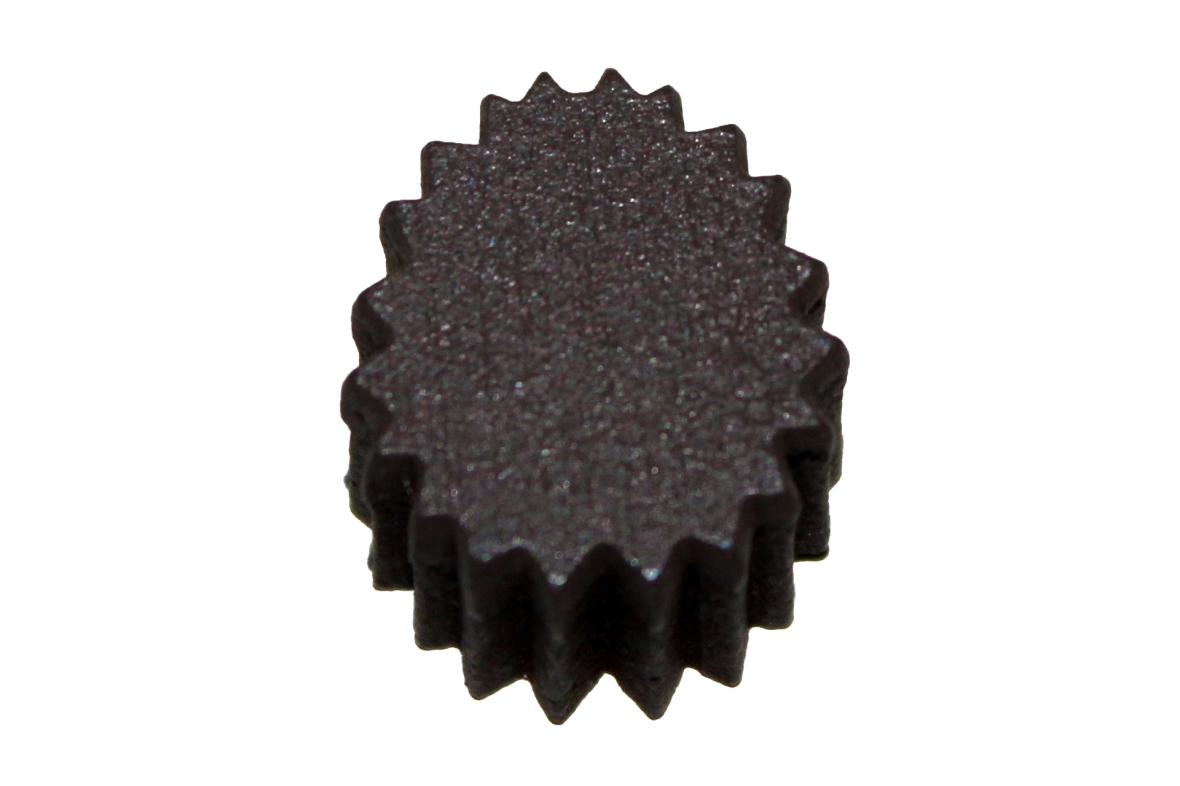 Set that out in the center as well. Next, have each player choose a blender color and give them one of the dice: 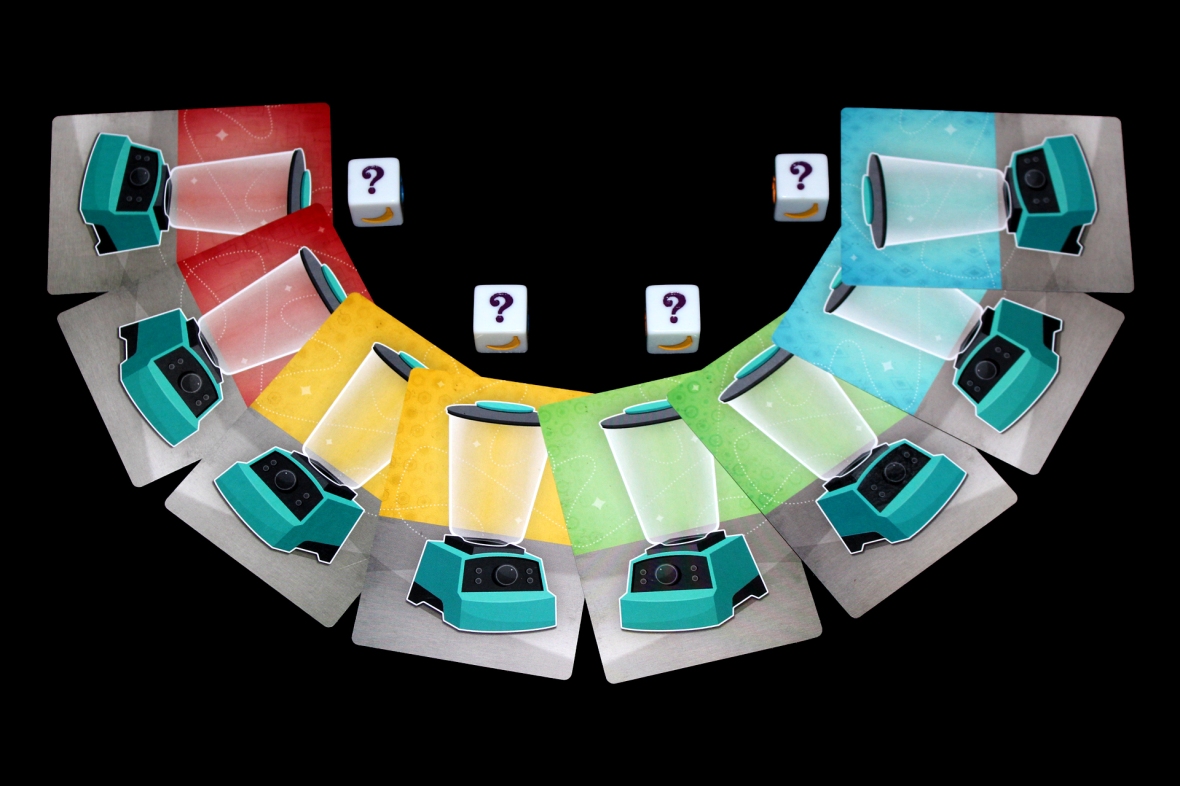 This will inform which smoothie cards you use during the game, and there are a lot:

Take the orange cards and the cards for each player’s smoothie color and shuffle them, forming the deck (this is Becca’s job: bringing you the smoothie orders as they come in). This part is important for reasons I will explain later, but show all players the bottom card and make sure it’s not a Special Order (it’ll say “Special Order” on there). If it is, just reshuffle until it’s not. Once you’ve done that, flip over X + 1 cards, where X is the number of players. In some cases, you’ll flip a Special Order card:

If that happens, keep flipping cards until you’ve flipped a regular order on top of it. The Special Orders all modify the regular orders above them, either by adding ingredients or removing the ingredient in the indicated slot. Once you’ve done that, your play area should look like this: 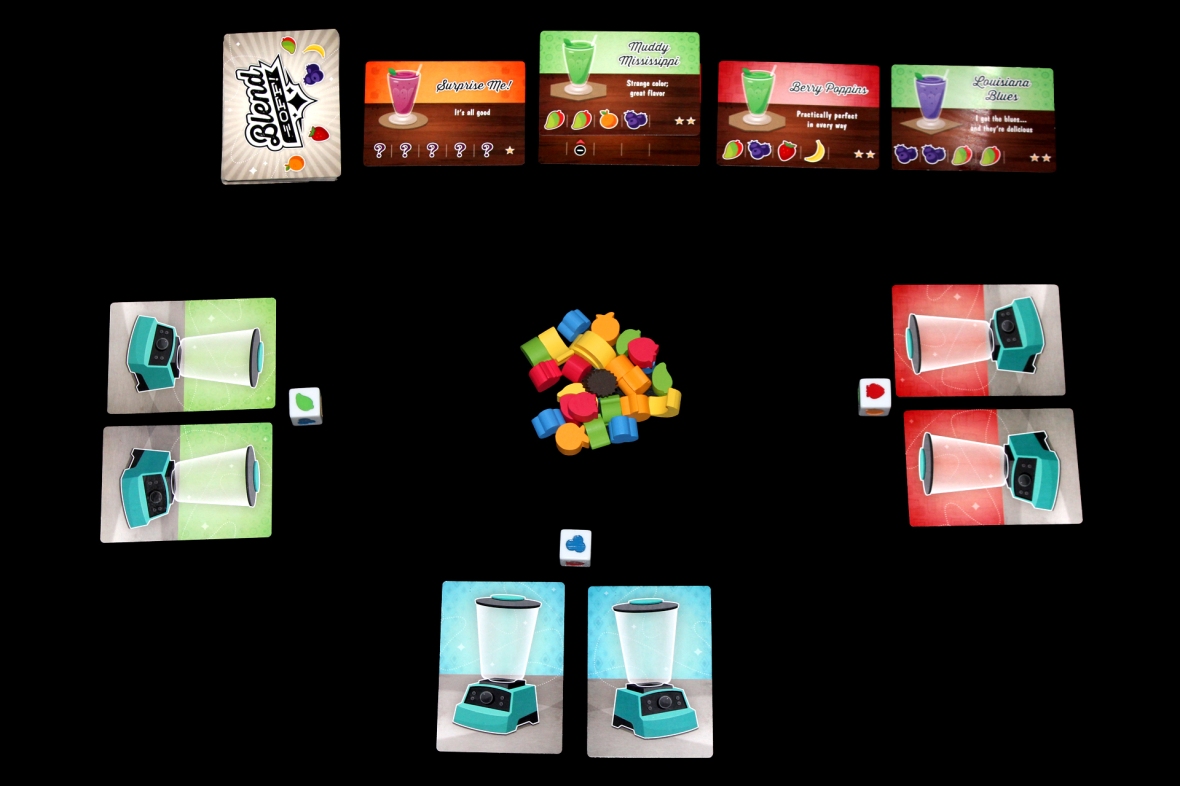 Notice that the Muddy Mississippi has had one mango removed via the Special Order below it, and the Surprise Me just requires any five ingredients.

Gameplay is fairly straightforward. There are three actions you can take on your turn: Roll, Dump, and Blend. I’ll go through each in turn.

For this action, you ask Kevin to get you an ingredient from the back. Unfortunately, Kevin’s vaguely unhelpful, so his “contribution” is represented by a roll of the die. When you roll, you will roll one of the five fruits and add it to one of your blenders. If you roll the purple ?, you can choose which of the five fruits you’d like to take. If you roll a fruit that is no longer available, Kevin gets confused and brings you the durian. Rather than give that to a customer (why would you?), you can dunk that into another player’s blender, which forces them to dump their blender back to the center (unless you’re trying to complete the Enduriance Challenge, in which you can dunk it on yourself to blend it). You can only do this if that player is not currently taking the Blend Action.

While this is the subject of some debate, we play it that if you roll the purple ?, you cannot normally take the durian unless one or more fruits are depleted. We assert that it’s you saying “I want a banana” and then there are no bananas left, so you get the durian. It’s controversial. The important thing is that you cannot just take the durian under normal circumstances if you roll a purple “?”.

This one is rather straightforward. If you’ve mistakenly added the wrong ingredient to your blender, you can’t just stick your hand in and fish it out; that’s gross! Plus, what if the blender accidentally turns on? Terrifying. Instead, you can take the Dump Action to pour your blender out, returning the ingredients to the center. If someone dunks a durian on you, you must dump that blender. That’s about it.

For Blend, you exclaim, “Blend!” and then you start blending. You do this by taking the following actions, in order:

If you mess this up, you’ve committed a Blender Blunder! If you do this enough times, you’re on a Blender Blunder Bender, but that’s not anything we’re going to deal with. If someone catches you making a Blender Blunder, they can say “Blunder!”, which requires you to stop doing anything until the next time another player takes a Blend action. This prevents cheating and all sorts of tomfoolery, if you’re paying attention. That said, it’s also hard to focus on other people and still win, so … you do you with this one.

Play continues until all the smoothie orders have been made via Blend Actions. Once that’s done, count the number of stars on smoothie cards you’ve collected, and the player with the most stars wins!

I actually like it more at higher player counts. At two, it’s very easy to enter into a slightly degenerate state in which the other player commits a Blender Blunder and you can lock them out of the game until you’ve basically finished two smoothies (or worse, if you want to get creative and durian them a few times). At four, you’ve got the most smoothie options, the most fruit in play, and you’re likely to get blocked less, so there’s a lot more to do each turn. It’s great!

The major differences are that you will use fewer smoothie cards and fruits, and you will have certain types of smoothies out of play (since you only use smoothie cards that match the colors of the blenders being used). Generally, the game scales, though, so there’s no real difference; I just enjoy it at four because there’s more things happening at the same time.

Other than that, it’s a game of speed, so just kind of go for the fun part. It’s similar to Ice Cool in that regard — you kinda can’t totally strategize because at some point it’s a bit luck, but there are certain skill elements you can try and leverage to do a bit better.

Overall, Blend Off! is a really great short-form dice-rolling game. I particularly would praise it for its portability, as it’s something I often bring with me in a small bag if I’m looking to get some quick, light gaming in. I would highly recommend checking it out if you’re looking for a short, fun family game, or if you just really like smoothies.