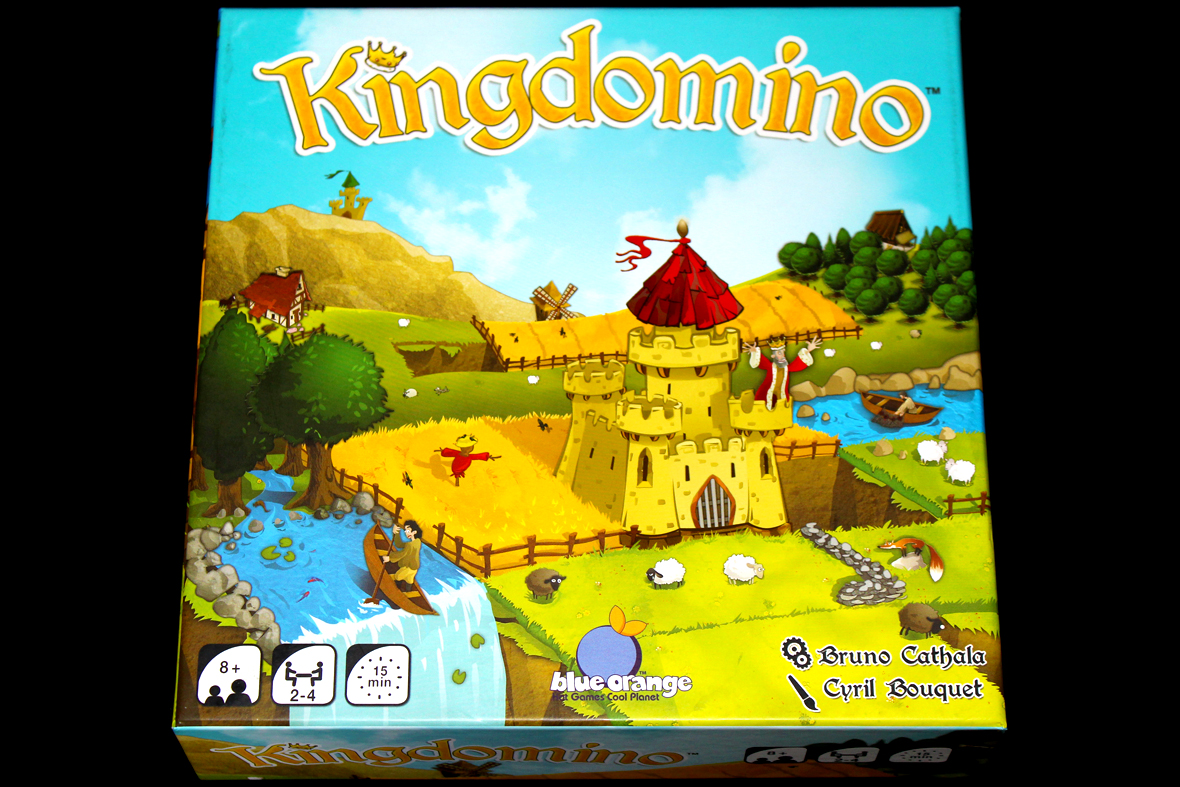 As someone super vulnerable to hype, I couldn’t help but notice that Kingdomino was nominated for this year’s Spiel des Jahres award (essentially Game of the Year), so I figured I’d slide in for a hot take or whatever while there’s still a ton of press about it because why not.

In Kingdomino (whether that’s Kingdom-ino or King-domino is up to you probably, though I’ve been told it’s the former), you are vying to develop new territory and expand your Kingdom, as your current 1×1 square is a bit small. That said, so is everyone else, as is pretty much consistent in all games about developing Kingdoms ever, from the both-aptly-named-and-explicitly-literal Kingdom Builder to Dominion to Vye to Tiny Epic Kingdoms and so on. Will you be able to create the greatest Kingdom ever? Or will your territories fall, one after another, just like … I don’t know, cards? Paper? Something that falls.

Setup for this game is super easy. Give each player a 1×1 Kingdom square and a Castle in a color: 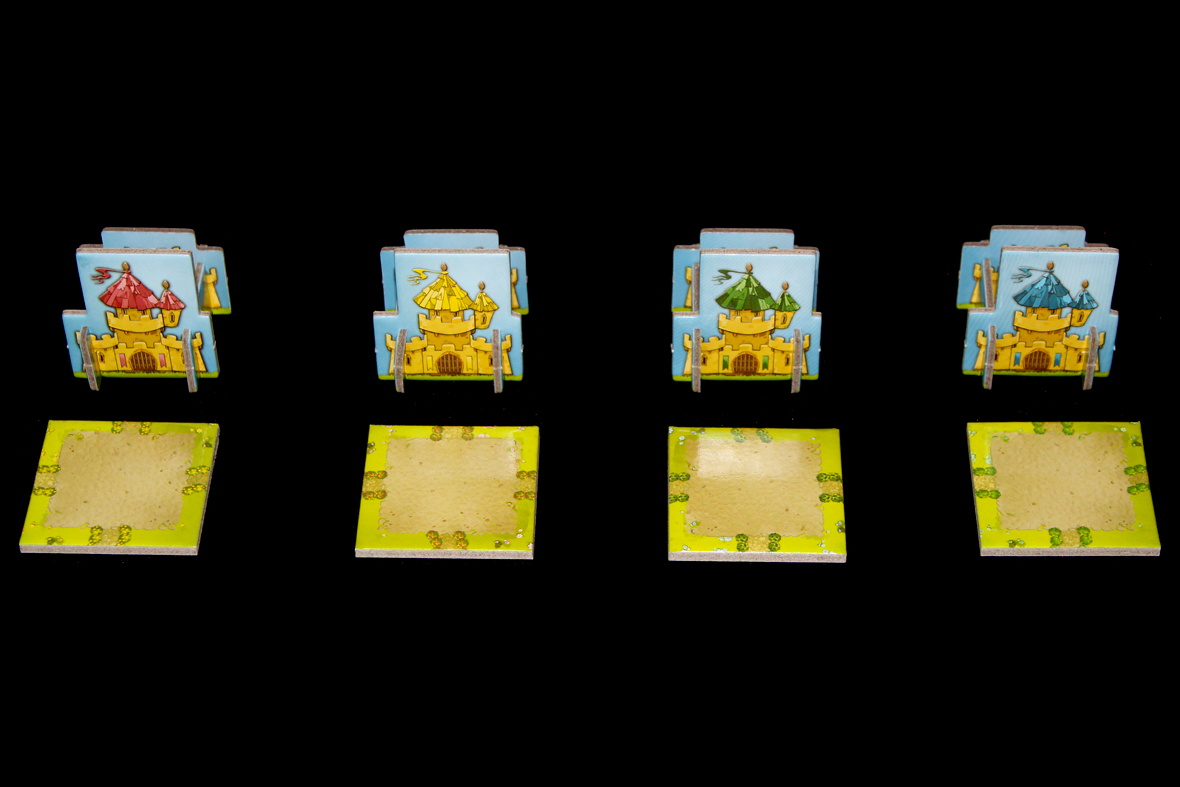 Put the Castle on the 1×1. Each player should take the corresponding Lords or Ladies (meeples from here on out) in that color: 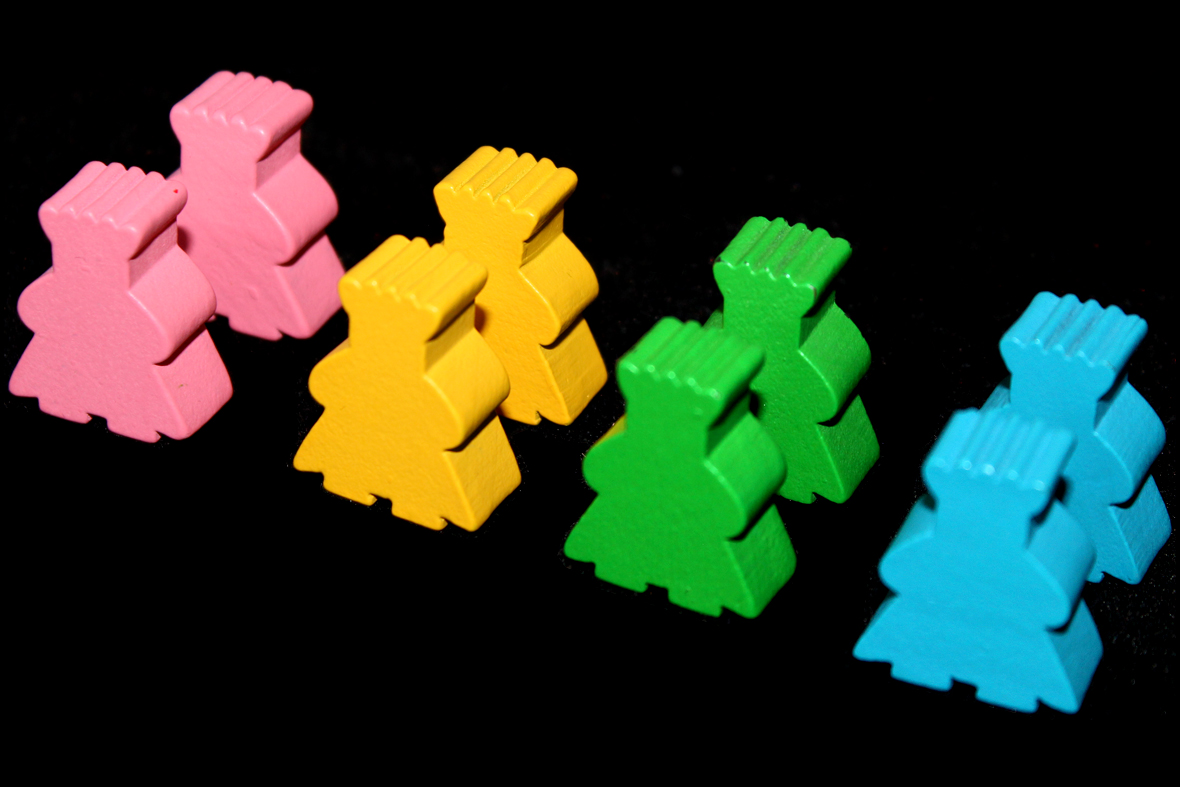 Now, take one for each player (or both in a two-player game) and randomly order them. That will be the initial player order.

Shuffle up the tiles: 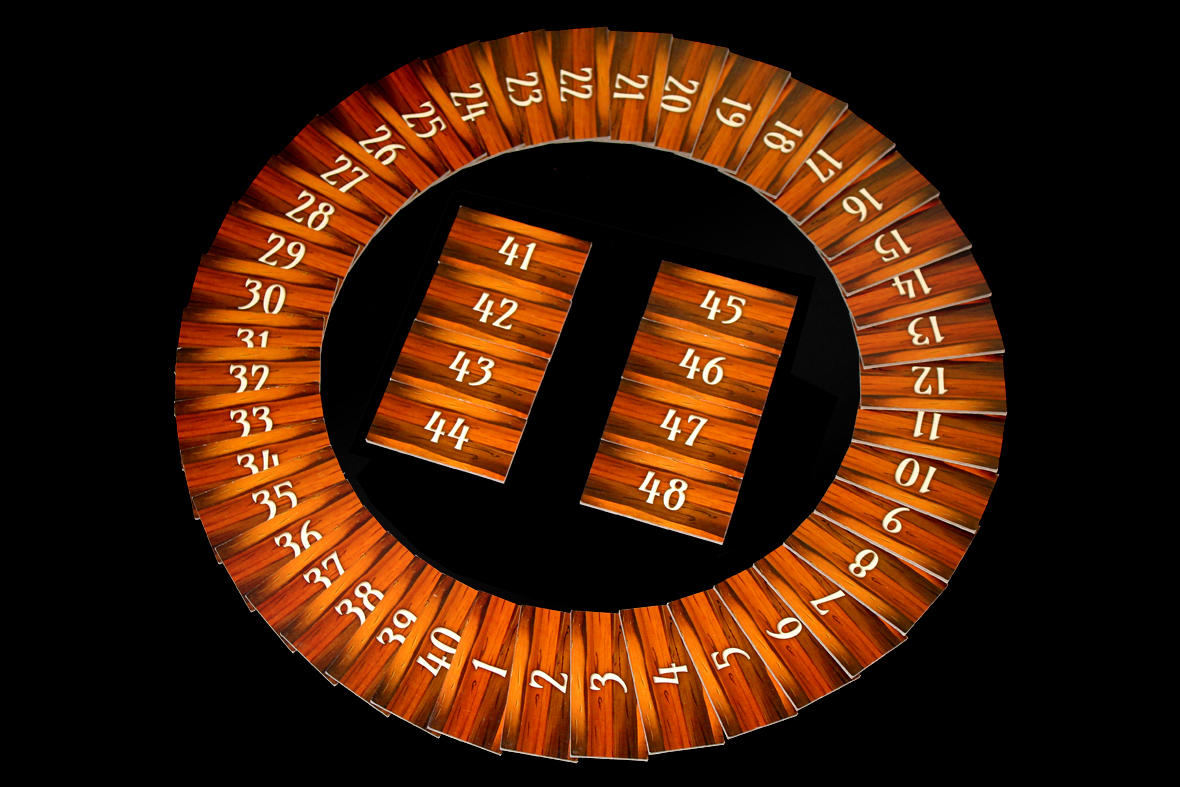 Draw X tiles (where X is either the number of players you have or 4, if you have two players) and put them in numerical order. Flip them over, and you should be ready to start! 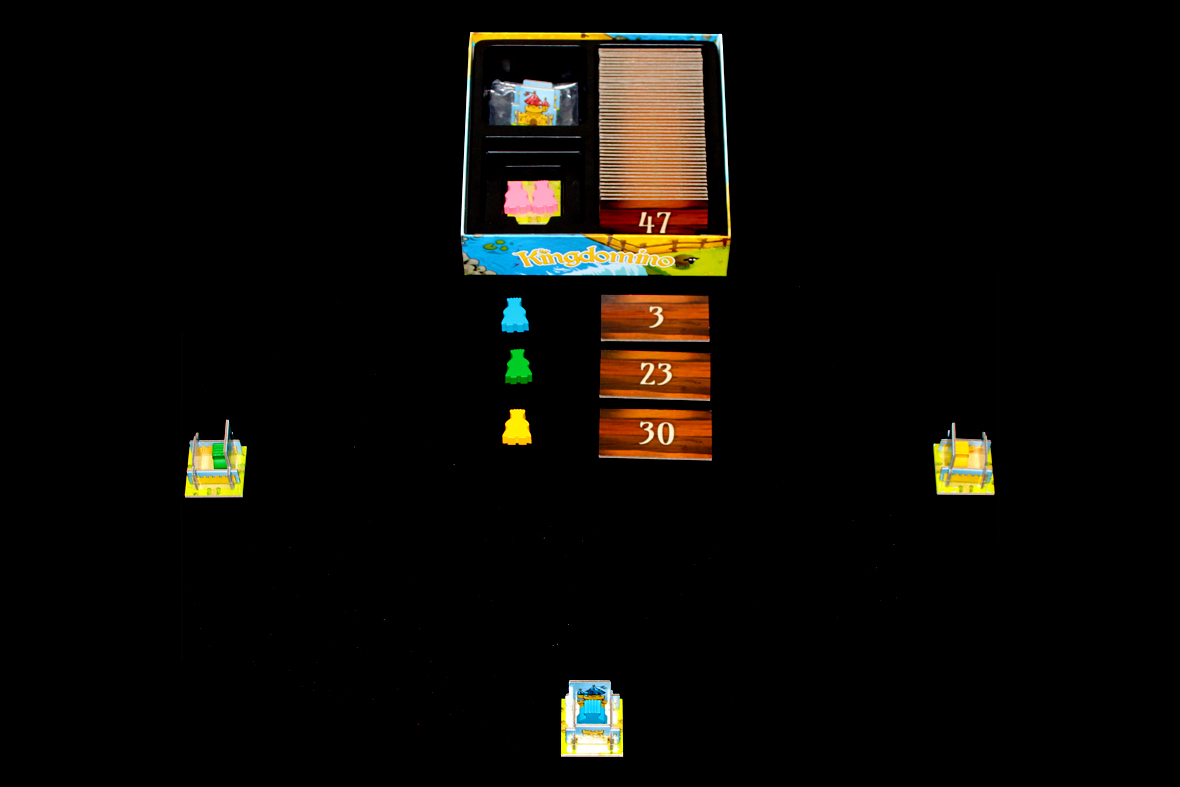 I’ll cover each in turn.

So, on your first turn, your meeple will not be on any tiles, so skip this and go straight to Choose a New Tile. On subsequent turns, though, you will take the tile your meeple is currently on and add it to your Kingdom, following these rules / suggestions:

So, now, you’ll pick the tile you want next, in player order. This determines your player order next round, so be careful! If you pick the top-most tile, you will go first, but they tend to be … less explicitly helpful, sometimes.

Note that in a two-player game you’ll be taking two turns, essentially, since you’re using all four of your meeples.

Now, you’ll again draw X tiles (4 tiles in a two- or four-player game, 3 in a three-player game), put them in numerical order (lowest first), and then flip them over. These are the tiles you’ll be choosing from next round.

For final scoring, as mentioned previously, you score each terrain area like so:

So, for instance, this: 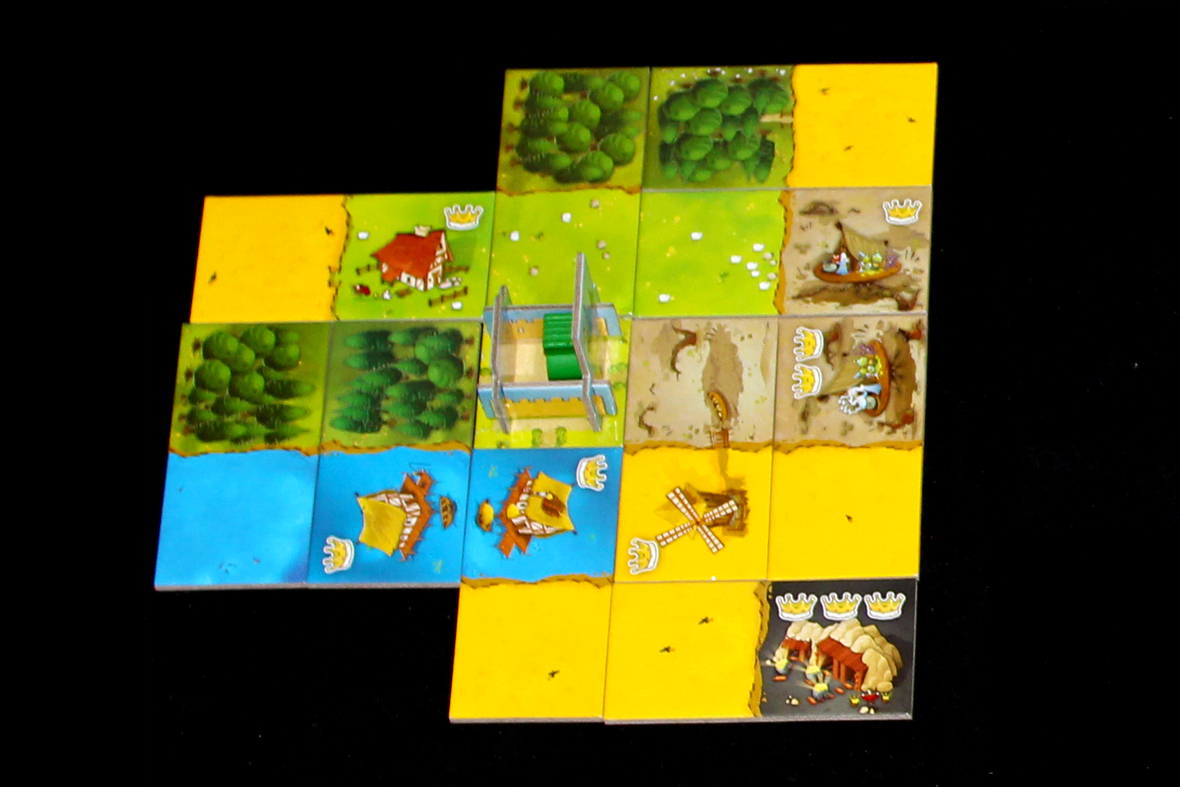 Would be worth 25 points:

For a total of 25 points, whereas this: 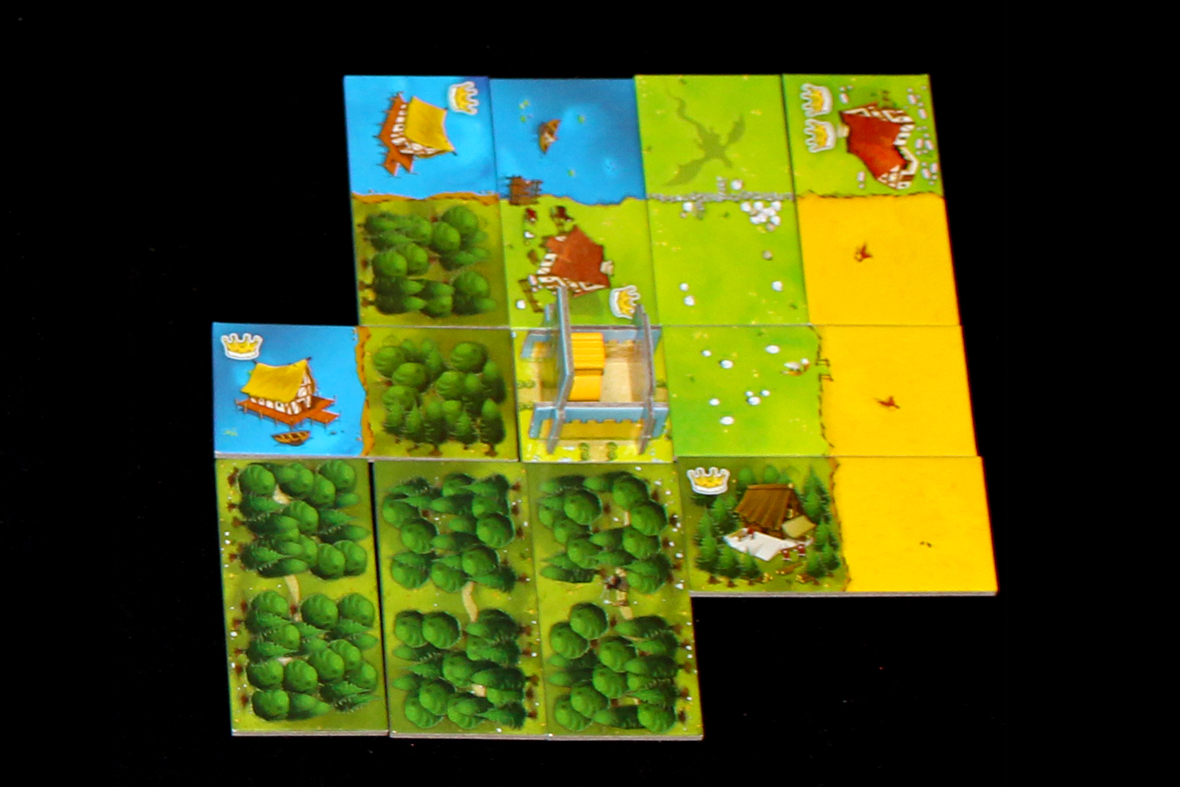 Would be worth 27 points:

Player with the most points wins!

I probably like this best at two, since I feel like you have the most options (as you see four tiles), but four players is fast and frenetic and fun. At three, I often feel like I get “caught” between two other players and kind of forced into certain options, which I like a bit less. My highest recommendation is at two, for this game, but I have no real issues with it at any player count. 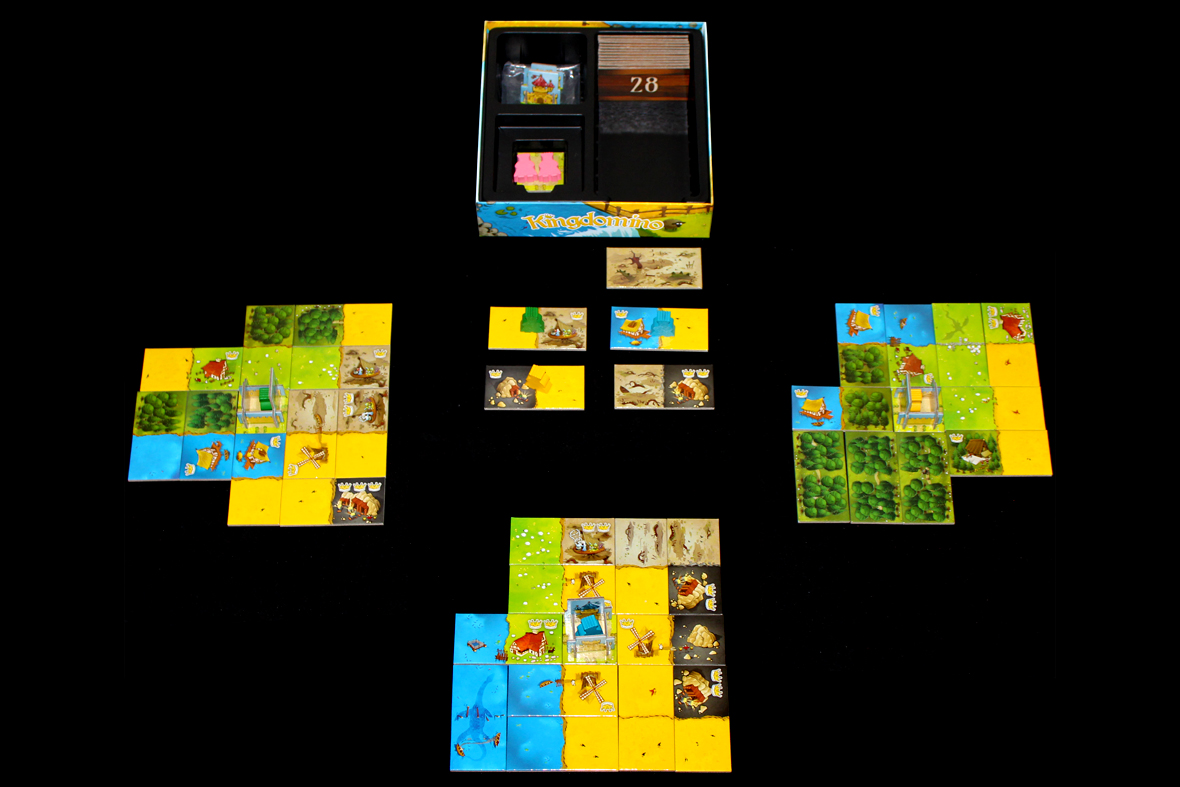 Overall, I think everyone should have or try Kingdomino. It’s simple, light, and fun, and I like the whimsical art and the easy-to-pick-up gameplay. Sure, I think I’d like it even more with an expansion or two, but the base game seems like a great way to introduce modern gaming to a wide variety of people. I’ve played it with a lot of different people, at this point, and it’s been very well-received, which makes sense given the SdJ nomination. If you enjoy tile-laying games, this is definitely one worth checking out!