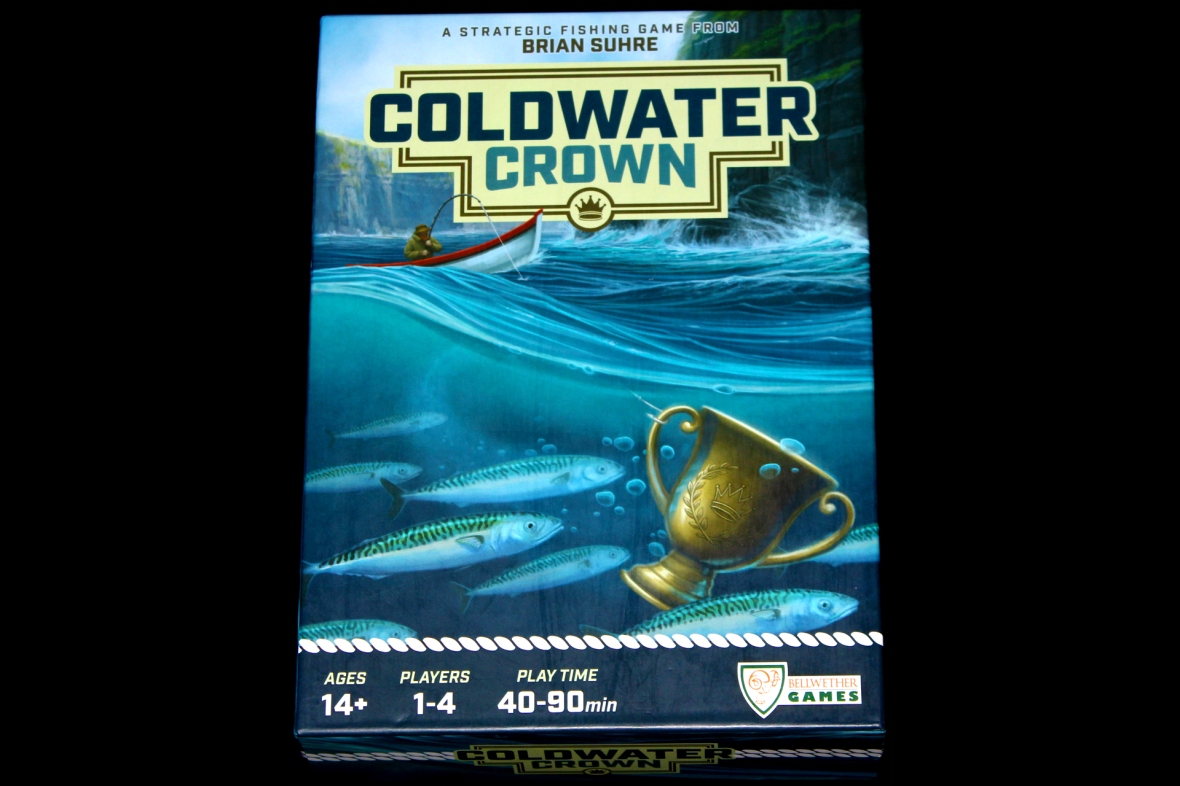 So I’m a sucker for games with off-the-beaten-path themes. It’s part of why you see me reviewing games like Wolf & Hound, Ice Cool, Sagrada, or Blend Off!. This isn’t to say I don’t like your Dominions or your Kingdom Builders, just that I have a soft spot for more unconventional themes in games.

As you can imagine, Coldwater Crown caught my eye for that exact reason. I happened upon it at Gen Con via a chance encounter, sat down to play it while the designer sat with us and made fish puns, and liked it enough to Kickstart it (minor review spoilers: I did and still do enjoy it). In Coldwater Crown, you’re a competitive fisherperson whose sole goal is to catch some fish. There are many different prizes to be won, but the true competition is an all-around showdown across three different locations. Are you the reel deal? Or will you prove to be a fish out of water?

There are a lot of little pieces to this game, so bear with me on this.

First and easiest thing to set out is the board:

Just … do that. Now, you’ll want to add all the trophies and such to the table. There should be a few kinds:

As far as player count goes, here’s how you set out those trophies:

Also set out one of the 5 Tags randomly on its space on the board; these will give a bonus point if you submit certain fish to the competitions: 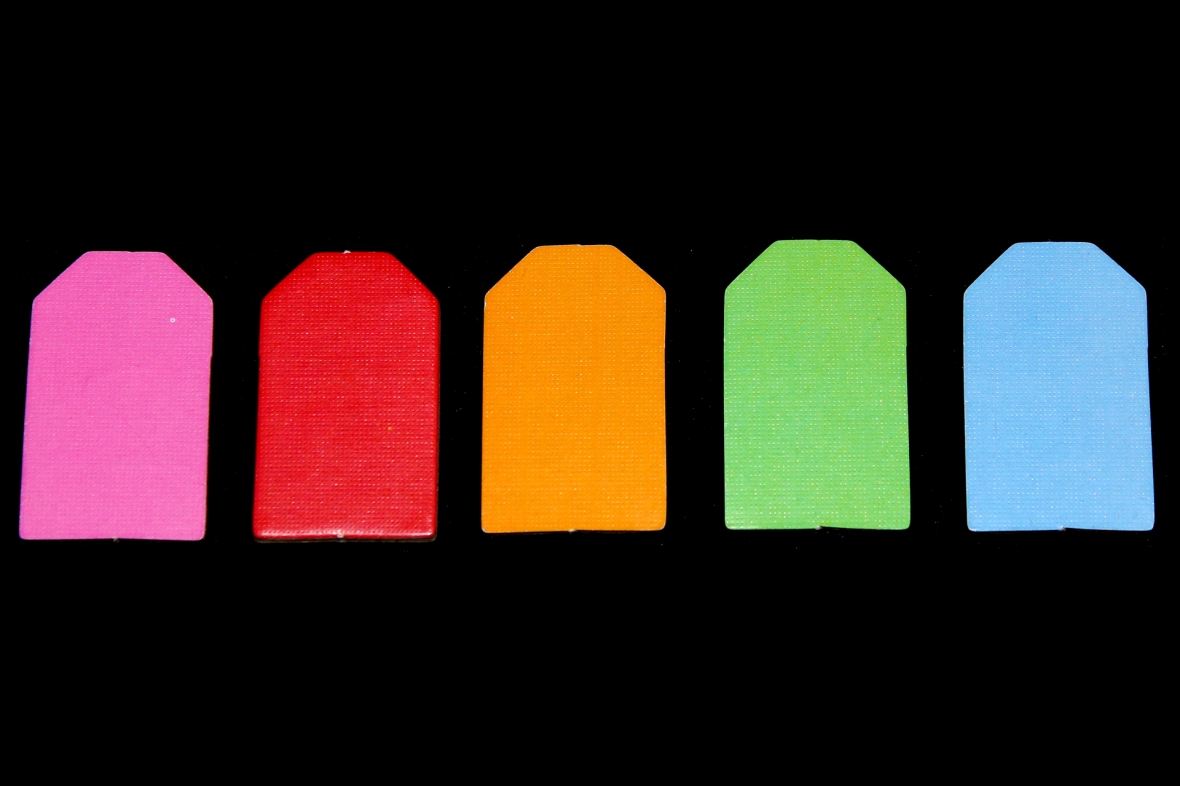 The others can go in the box. Next, you’ll want to give each player one of the player markers:

Now, flip over four of the Master Angler cards: 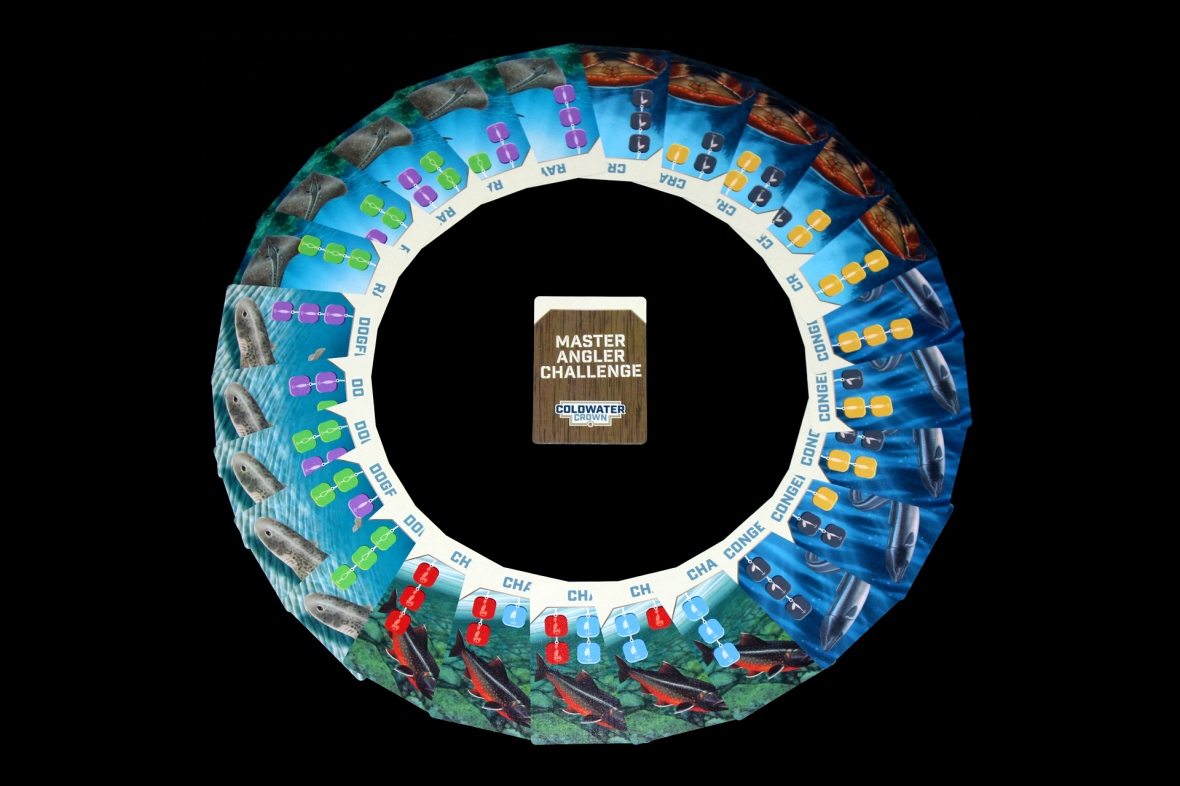 Set them by the board. Now, give every player a player board:

Once they have that, everyone can now take bait from the bait bag:

Lastly, give each player a Tackle:

For solo games, you’re going to do everything mostly the same as a two-player game, with some differences:

The gameplay itself doesn’t take that long. Most of the game is taken as a series of turns until any one player has caught 12 fish, at which point every other player gets one more turn before the final competition. But how do turns work? Simple:

Now, let’s talk about each of the spaces:

So, as you saw, you might catch a fish if you successfully clear one or more Zones on your turn. (This does mean that you can catch more than one fish, if you clear multiple zones simultaneously, which would be a very e-fish-ent strategy. [And yes, I’m going to make that pun several times.]) When you catch one, remove it from the Location you just played an action for and the Zone you just cleared. On the back, you’ll see: 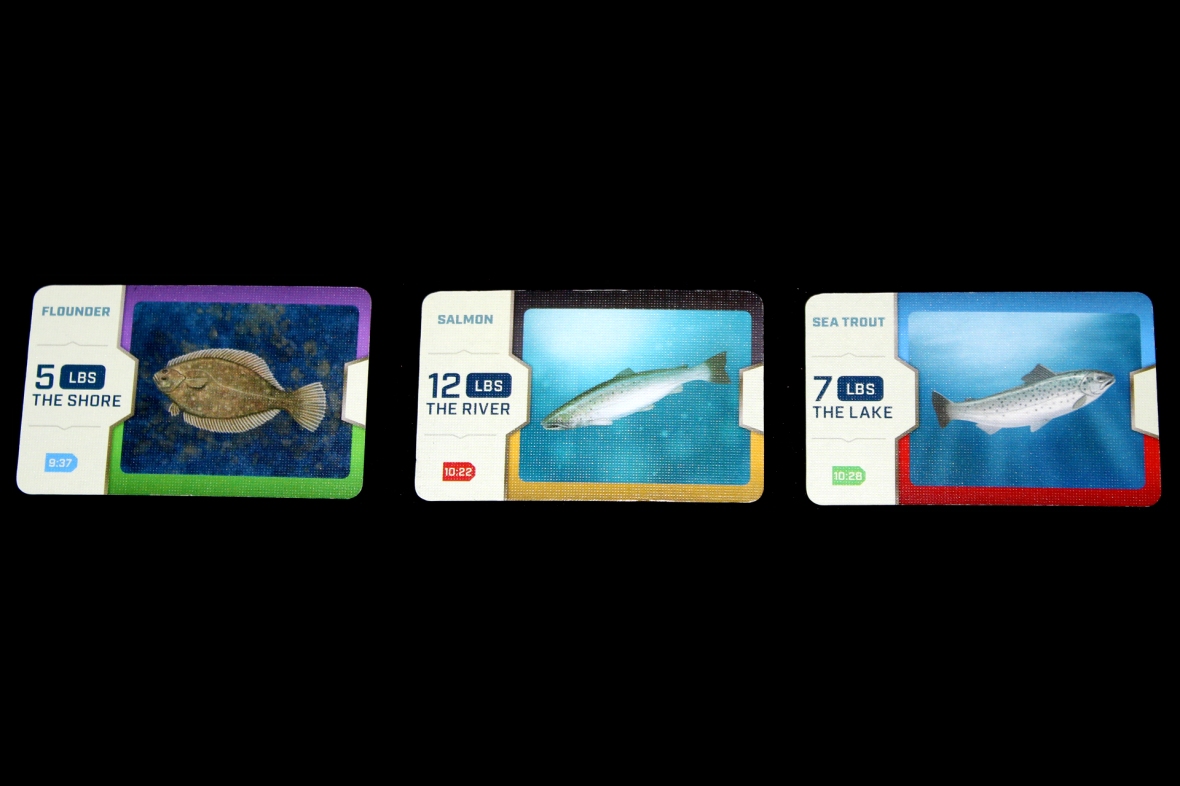 The tag may match the tag on the board, meaning if you submit this fish in the final competition you get an extra point, but also check the weight! If you match the Mystery Weight on the board then you can immediately take that tile for a bonus point. If you do, flip over the next tile.

You also may complete Master Angler cards when you cast sufficient bait to fill up all of their spots. If this happens, move them to the right side of your player board to signify that you completed them. If you complete 3 of the same species and / or 4 different species, take the corresponding Master Angler Challenge trophy

Certain Zones (5 and 6) also give you a bonus for emptying them:

Note that you cannot use the Tackle in conjunction with the Zone 5 or 6 bonuses (no using the Rod to catch the top card of a different location’s deck or taking a tackle because you used a Line to catch a fish in Zone 5).

So, there are three locations, each with their own trophy. Players must submit fish such that the total weight of the fish they’ve submitted is the highest. The catch is that players may only submit one fish of each species for a given location. If you have caught no fish at a location, you cannot participate. Otherwise, everyone submits face-down and then reveals and compares. First place gets the 5-point trophy, but each location has a winner. If you submit a fish with a tag matching the tag on the board, you get an additional point per matching fish. So whether you want to submit that fish or a heavier one is up to you.

Once all players have settled the Final Competitions, tally up the points between players. The player with the most points is the Coldwater Crown champion!

So the major difference here is that you have a “Silent Player” who does similar stuff to you, but in a spooky, mysterious, easily-predictable way. It’s like playing yourself, but the other you doesn’t have a mouth. Yes. That seems accurate. Let’s go with that.

On the Silent Player’s turn, you do this entire sequence:

Do this twice each Silent Player turn unless the Silent Player has more fish than you. If that’s the case, do this sequence only once.

Also, when the clear-white bait is drawn, you immediately place the top card of the Master Angler deck into the Silent Player’s score pile (as though they completed it) and then do one of the following:

Well, there’s the obvious solo mode (which is pretty good! I just tried it for the first time the other day.), but I generally have a minor thing against games that sorta take the same amount of time per player no matter how many players you have (so they take longer with more players). I would have liked it a bit if maybe the number of fish required to end the game was reduced or something, but here we are. As it stands, I probably prefer it 2 > 3 > 4, player-count-wise.

Well, if you reel-y want to win Coldwater Crown, you’re going to need to plan some e-fish-ent strategies to get you over the fin-ish line. Heh.

Overall, I think Coldwater Crown is great. I love the theme and I always feel like there’s a lot to do in the game, even if my turn got a bit blocked so there’s not as much to do on my turn in particular. While that’s a bummer, eventually I’ll get over it, so it’s fine. Sure, it’s long with more people, but if anything that means it’s a solid two-player game, and it’s certainly easy to get people hooked on it. I’d say it’s a very satisfying gameplay experience, and I feel fortunate that I was lucky enough to get to play it at Gen Con, and am super enthusiastic about playing it now. If you know someone that likes fishing and wants to get into board games, this might be a good fit for them. If you know someone who likes off-the-beaten-path themes for board games, this is a solid entry in that group. For everyone else, I mean, it’s a solid fishing game, why not give it a whirl?