Surprising nobody, I’m a huge fan of Tim Fowers’s games. Picked up Paperback and Burgle Bros. a while ago, previewed Hardback and Now Boarding, and backed Fugitive the moment I heard about it, both for the aforementioned reason and because you really can never have too many two-player games.

Anyways. Fugitive is a rare “sequel” game, in that it happens immediately after Burgle Bros. ends; you get to the roof and the Marshal shows up. Now, the Rook is a Rook no longer; they’re a Fugitive, trying to escape the Marshal’s relentless chase. One player is the Marshal; the other is the Fugitive. Who will win?

Setup is pretty easy, as usual for many of the games I review. One player is the Fugitive, the other is the Marshal. Give the Marshal this erasable pad with a marker:

You can also use the Fugitive Notepad app, if that’s more your scene.

You’ll next want to set out the board on one side of the table (this game is a horizontally long game, so try to pick as far out as you can):

Now, choose if you want to play with Events (random effects that change the game):

There are two ways to play with Events:

Once you’ve done all that, set the 0 face-up by the board. You should be ready to start!

The game is played over a series of rounds, in which the Fugitive adds additional Hideout cards to the line and the Marshal tries to guess which cards the Fugitive played. It’s a straight-up deduction game. The game ends when either:

Let’s take it turn by turn.

So the Fugitive always goes first. Here’s how their turn works:

How does placing Hideouts work? Well, you place a Hideout face-down, and it must be 1, 2, or 3 greater than your previous Hideout. You might not be able to always place a Hideout, and that’s not great! You’re on the run, you know. So if you’re in a pinch, you can Sprint to your next hideout by adding cards face-down above the Hideout. Each card has a Sprint value of 1 or 2 (note the footprints), meaning that you can increase your range by 1 or 2. So, if you play two Sprint cards with Sprint values of 2, your next Hideout can be up to 7 greater than your last Hideout. This does use up a lot of cards quickly, though, so be careful.

Once you’ve drawn, if you have no Hideouts you can play that adhere to the rules (or if you’d prefer not to play a Hideout for some reason), you can pass.

Continue doing this until you play Hideout #42, and you win!

The Marshal always goes second; here’s how their turn works.

Your guess can be as many Hideouts as you want, and the Fugitive must answer “correct” and reveal all guessed Hideouts, or answer “incorrect” and reveal none. Note that this is an all-or-nothing proposition; you don’t get any partial credit, so if you guess more than one Hideout, you better be correct about all of them. If you are correct on a guess, the Fugitive reveals the Hideout and all played Sprint cards, so you get extra information. Keep track of revealed Hideouts and cards in your hand on your Marshal pad, but don’t show it to the Fugitive.

You win if all Hideouts are revealed — you’ve tracked down the Fugitive! However, if the Fugitive wins and you haven’t revealed a Hideout higher than 29, you enter a Manhunt. You can now take one last desperate chance to guess all the Hideouts, one at a time. Each time you guess, if you’re wrong, you lose. Otherwise, the Fugitive reveals the Hideout and all Sprint cards and you guess again.

Either way, after you resolve the Event, you draw another card.

Play until one player wins!

No differences; it’s two players only. 🙂

Since it’s basically a pure deduction game, there are a lot of opportunities for good (and bad!) strategies. I’ll give a quick overview of what’s worked (and hasn’t worked) for me. 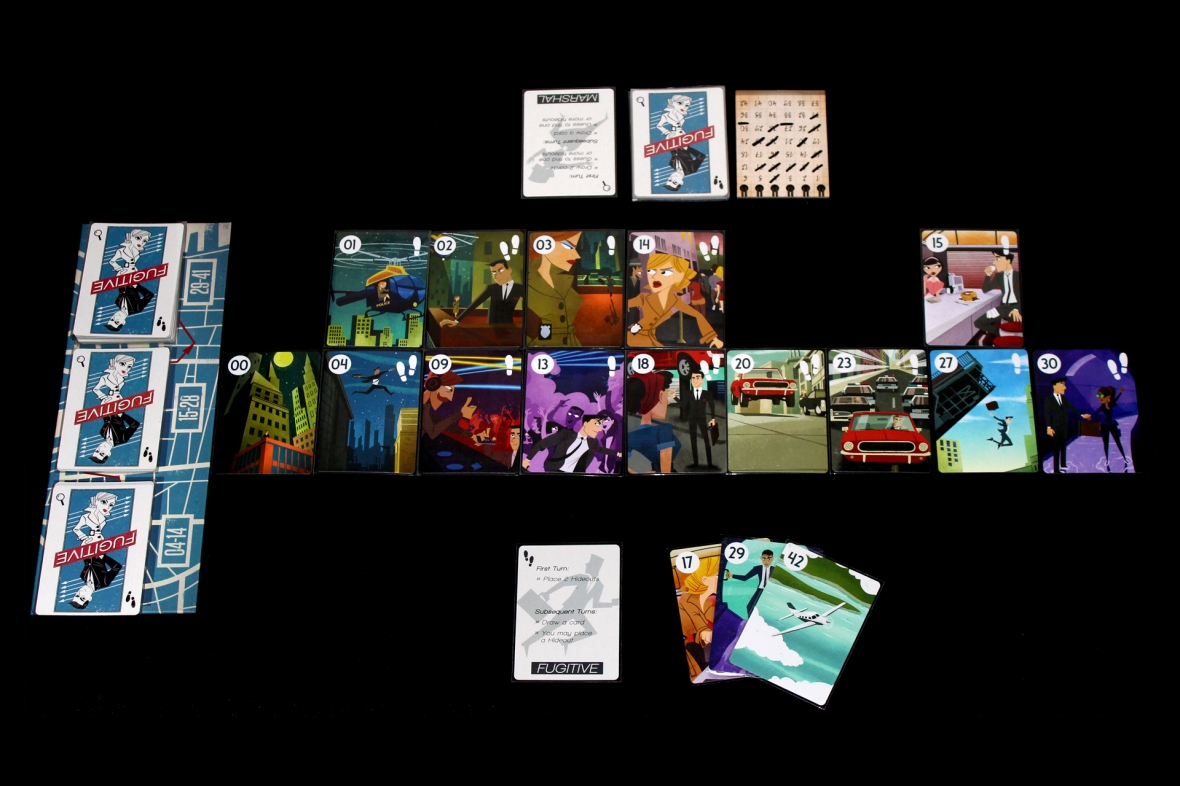 Overall, I think Fugitive is a great game! Sure, I think that the Marshal tends to win more in my play groups, but part of that is that it’s a challenge to future Fugitives — can you beat the Marshal, even if you feel like the game is slightly stacked against you? Either way, generally, it doesn’t matter because the game plays fairly quickly. I’d love to start trying the game with a timer to see if that affects it, or changing the proportions of Events to see how that goes, but that’ll take some more experimenting to find a sweet spot. In the meantime, I’m totally excited to play another great game in the Burgle Bros. universe, as the art’s impeccable, the game is short and fun, and the theme is awesome. Honestly, another triumph from Tim Fowers, and I’m super excited to see what games are coming up next.