Oh hey, more dexterity games. It’s pretty well-known that I’ve got a soft spot for dexterity games, ranging from Ice Cool (obviously) to Mars Open: Tabletop Golf to the indefensible Carcassonne: The Catapult (and I look forward to the day when all of these links are blue). Why not add one more, but this time, one from the ever-popular Renegade Game Studios? Seems like a good fit.

In Flip Ships you, like Will Smith before you, are in charge of welcoming some aggressive aliens to Earf as they exit the fearsome mothership. You’ll need to defeat them before they reach the city, but don’t forget about the mothership, lest you incur its fury. Will you be able to stop the invasion and save the world?

So this will take some time to set up. The easiest way is to start with the Battle Zone:

Put them in order (depending on your player count) and set them on the right side of your play area.

Next, set aside a set of Pilot Cards per number of players (you should have a 1, 2, and 3 for each player):

Place the First Player Marker above the leftmost set of Pilot Cards, along with the Docking Bay:

After that, have each player pick their ship color: 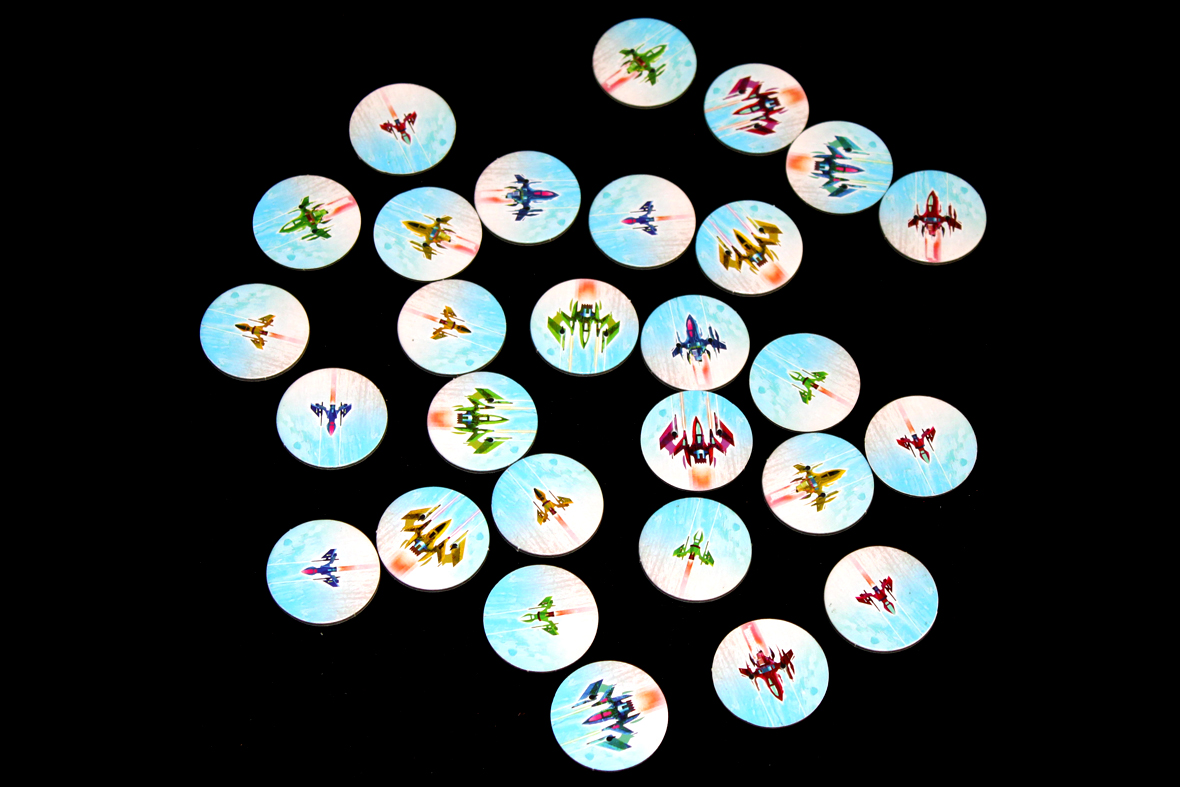 Now, shuffle the enemy cards together and make a deck:

The size of the deck depends on your player count and the difficulty level you want to play at: 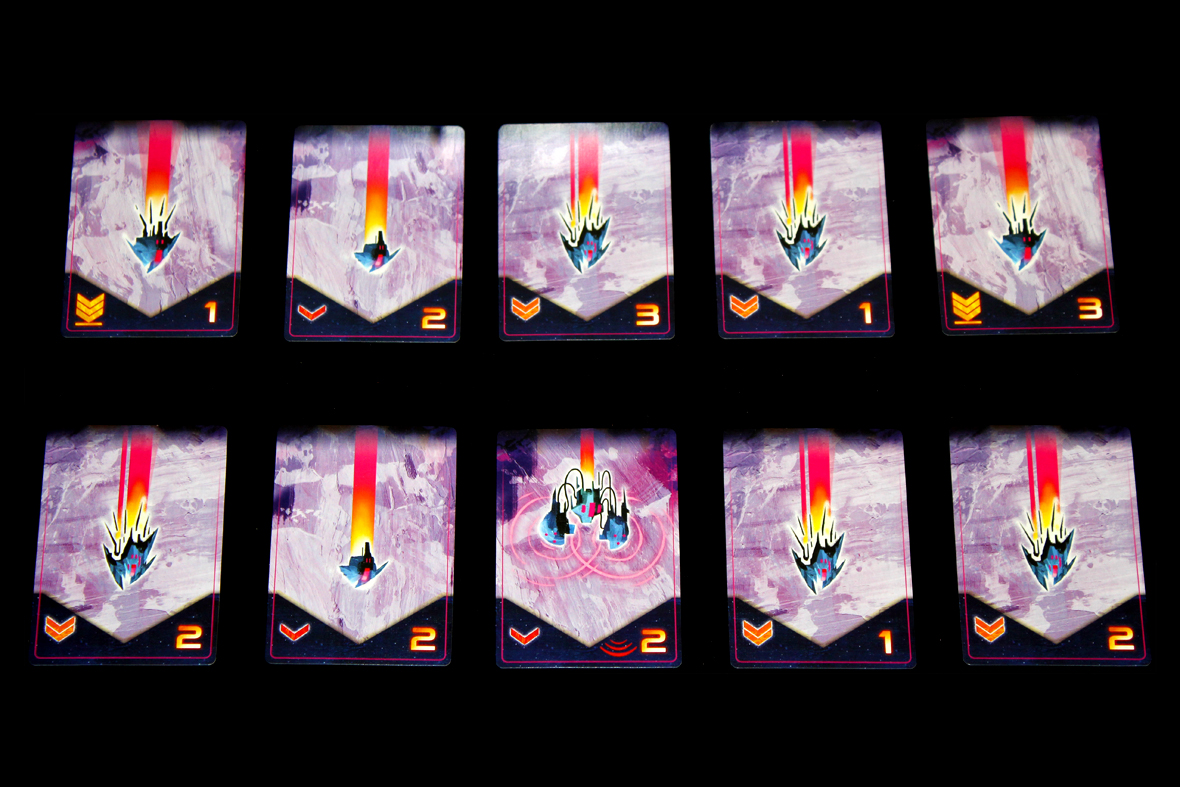 Now for one of my favorite parts. Assemble the Mothership and put it behind those two rows, kind of centered: 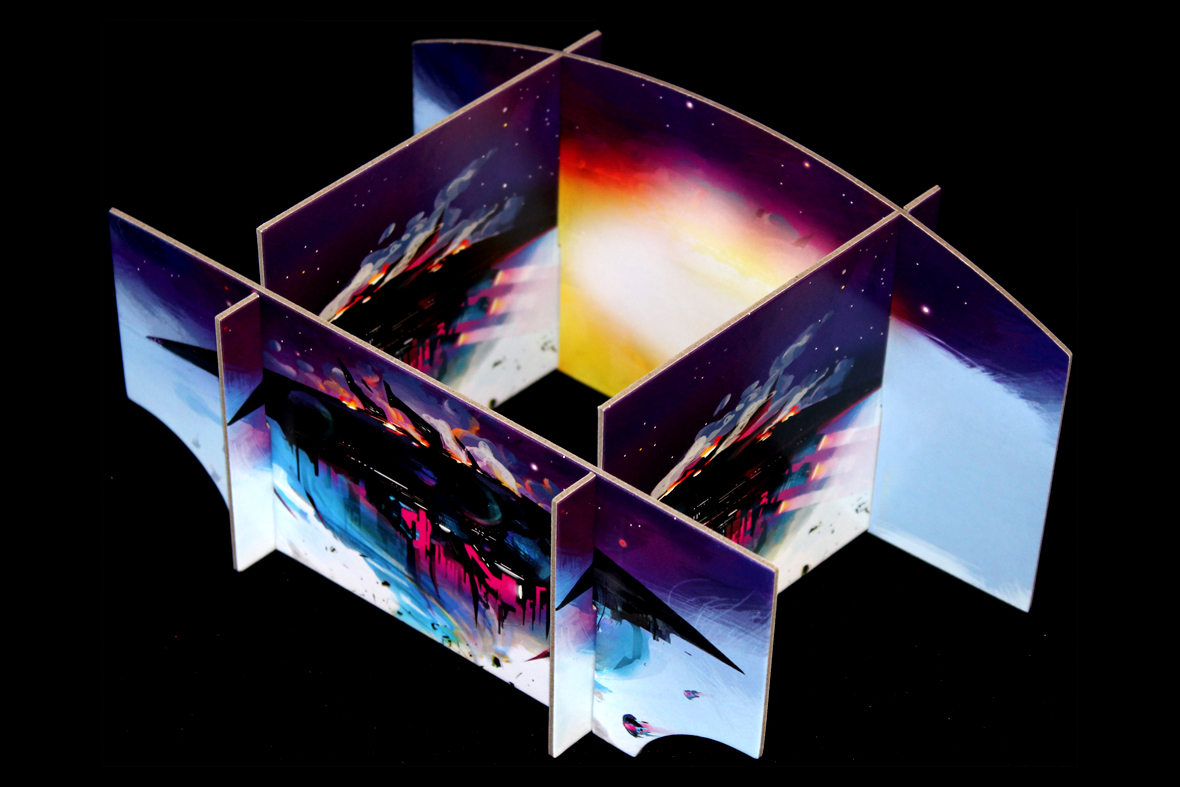 Yeah it’s basically a trash can but who cares it’s imposing. Grab the Launch Pad (it’s a red block), and set it aside. You’ll want to indicate its health (and the City’s health) using the Health Markers: 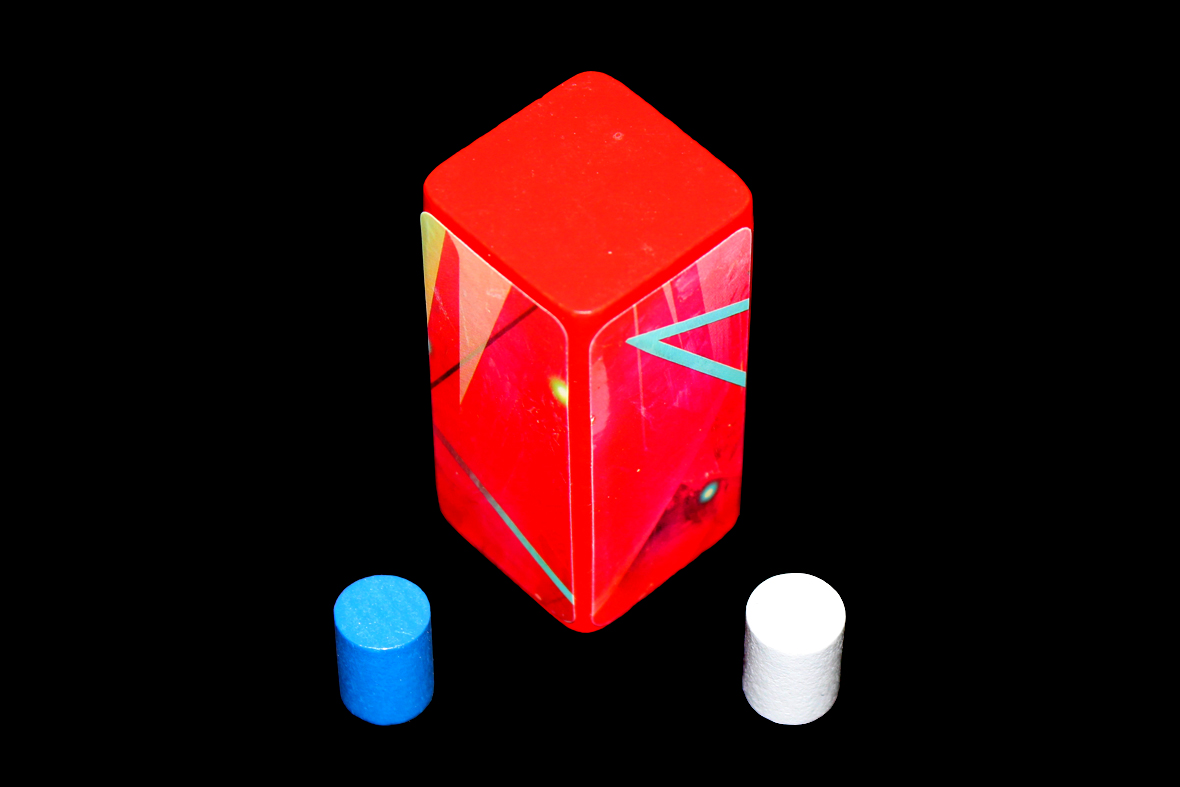 Man, that is not an interesting picture. Oh well. For the City:

12 seems like a lot, but hey, you do you. You’ll also want to set aside the Targeting Computer Card:

But once you’ve done that you should be ready to start!

So you know how much I love Ice Cool, yeah? Well, imagine a bit of that, a bit of Space Invaders, and a bit of co-op gameplay and you’re not TERRIBLY far off.

The game is played over several rounds, each consisting of player turns. The round ends with the enemy’s turn and a cleanup phase.

Your turn will be two steps:

Once all players have resolved their turns, move any ships on shielded or multi-hit enemies to the Docking Bay. Now the enemy gets to go! Hooray!

There are many types of enemies, but the first thing you should know is that they will all move towards the city to try and damage it. There are three different kinds of movement:

So, what’ll happen is starting from the bottom-right and moving up, then left, each enemy moves according to the number of chevrons in the bottom-left corner:

If any of them make it into the atmosphere, deal damage to the city equal to the number in the bottom-right corner of the card and shuffle the enemy back into the deck. That’s not good, but you know what is good? Every time you pass a pink number, you can add the lowest-ranked ship still on a Pilot card to every player’s Docking Bay, allowing you to flip even more ships! That’s excellent!

Now for the Cleanup Phase. It’s simple. Refill the top two rows of the board, adding enemy cards back, again going bottom to top, right to left. You should have either 10 enemies in the top two rows or no cards left in the deck. Either way, move the First Player marker one space to the right, and that player goes first, this time.

Continue playing until you have fewer than six enemies on the board at the start of a round.

So, if you start a round with fewer than six enemies, they’re going to get uh, agitated. They instantly all become kamikaze ships and will always hit the atmosphere if they’re not destroyed this turn. To make matters worse, they will deal double damage! That should knock y’all down a peg, I would assume.

To make matters worse, no reinforcements are sent in when the city takes damage from this phase. That just sucks.

If you manage to survive that, then you enter the Final Assault! The Mothership has used some kind of weapon to disable all of your Pilot Abilities, so it’s down to some final flips! If you can defeat the Mothership (or if you anticlimactically already have), then you win! If not, the Mothership takes a page straight out of Independence Day and hits the city for 20 damage, instantly destroying it! Rough.

Honestly, it’s hard no matter how many players you play it with. The biggest difference is how good are your players at hitting things and how spread are your Pilot abilities. Either way you personally only get one turn before the enemies move, so I would say it feels pretty much the same at any player count. I have no preference.

Overall, Flip Ships is super! It’s definitely one of the games I had the most fun with at Gen Con because it’s just the right amount of crazy for me. Sure, it’s overwhelmingly hard if you’re bad at flipping, sure, I haven’t won that many times, but it’s a blast! I can’t imagine playing it on Elite difficulty because I can barely win Standard, but other than that I’ve been having a lot of fun with it. I especially like how it feels like you could build on this from here and do even crazier stuff in an expansion or a follow-up. That said, in the moment, I think if you’re into dexterity games you won’t be disappointed by Flip Ships! I certainly think it’s pretty awesome.