Full disclosure: A review copy of The Quest for El Dorado was provided by Ravensburger Games.

Well I mean I’ve been working on reviewing all the SdJ nominees for 2017, having already covered Kingdomino and Magic Maze (I may not have posted Magic Maze by this time, so cut me some slack). Figure that The Quest for El Dorado should make it onto my list, as well.

In The Quest for El Dorado, you and other intrepid explorers are cutting and boating and buying your way through the jungle, trying to get to the fabled city of gold first, as nobody remembers or cares who got to El Dorado second. To do so, you’ll have to race your opponents, cutting them off and taking shortcuts to get through as fast as possible. Will you win the race to El Dorado?

The first thing you’ll notice is a bamboozle of tiles:

There are many different configurations of tiles, but here are a few of my favorites:

Pick one and go for it. You can also make your own, but you generally want to try and mix it up a bit if you’re making your own so you don’t create a dominant strategy (for instance, an unbroken chain of green / blue / yellow tiles from the start to the finish).

Next, add blockades between all of the tiles: 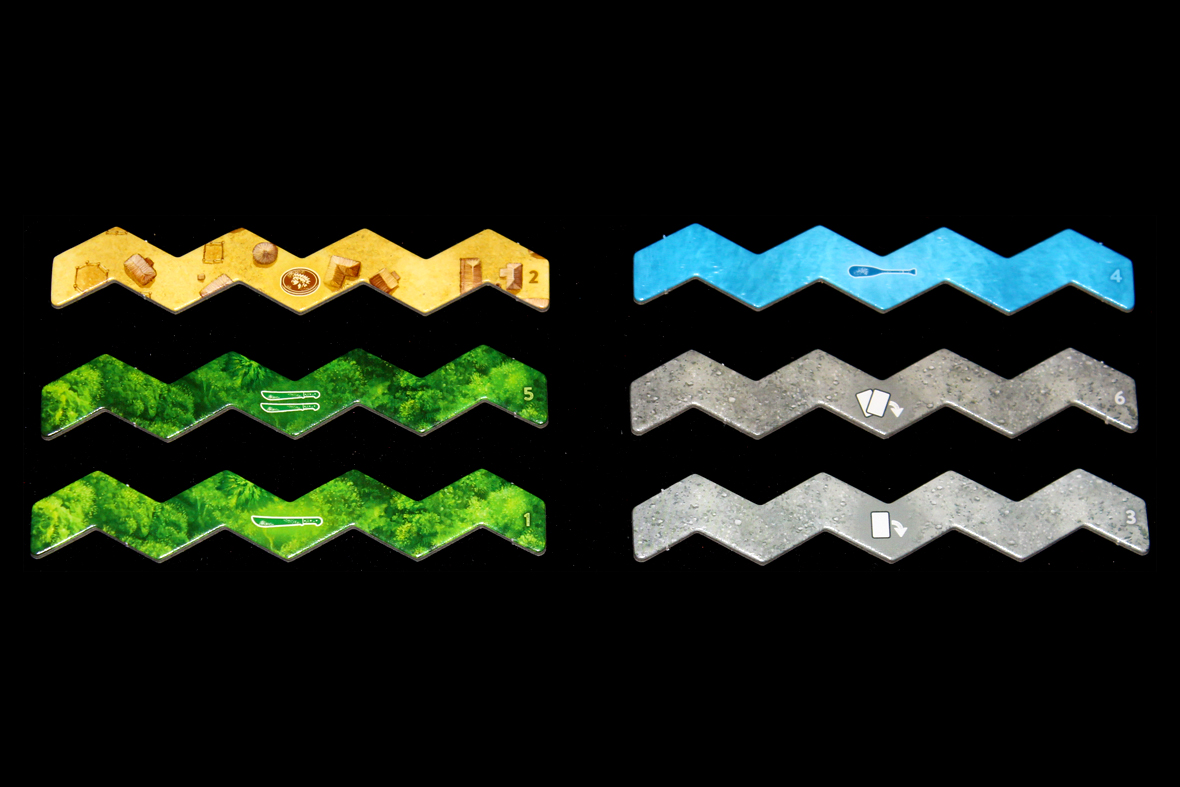 You’ll want to put them on the “entrance” to the next tile. Once you’ve done that, give each player a deck:

Oh, also give them starting tokens and a player board in the same color (check the bottom-right corner of the decks): 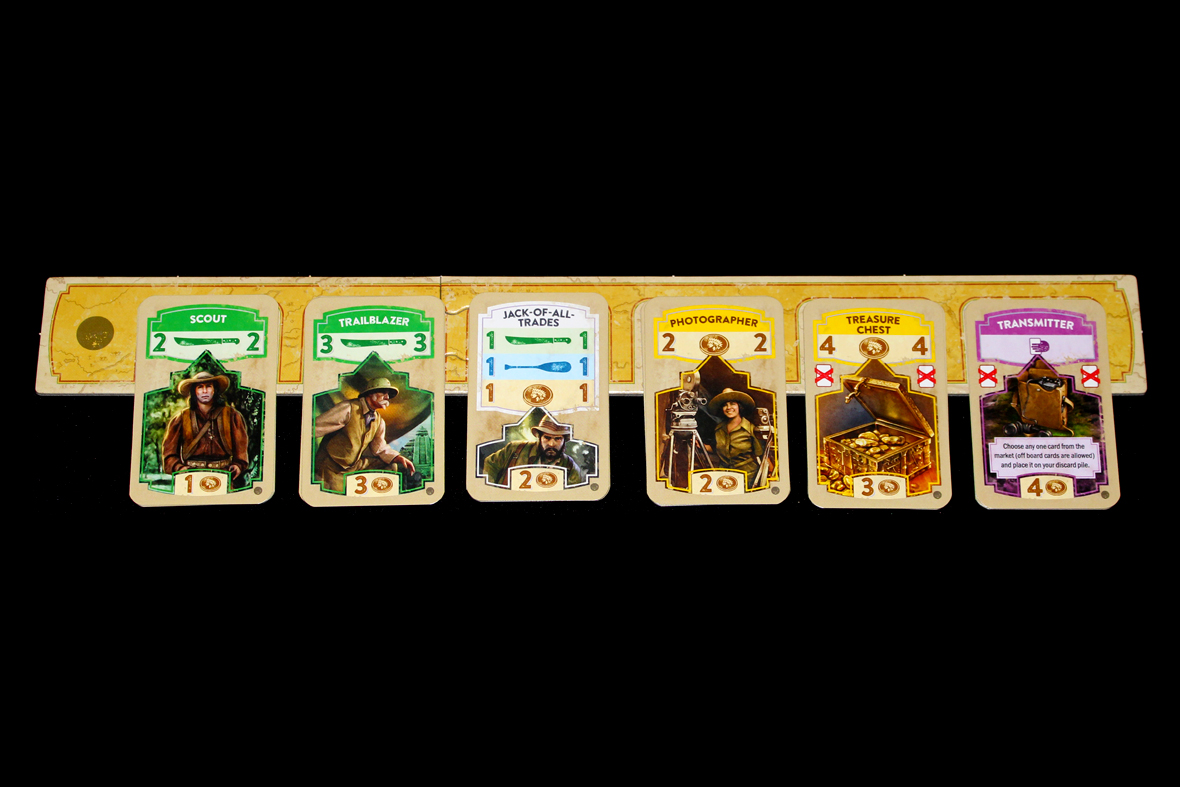 Add those, and set the remaining cards behind to form the Marketplace: 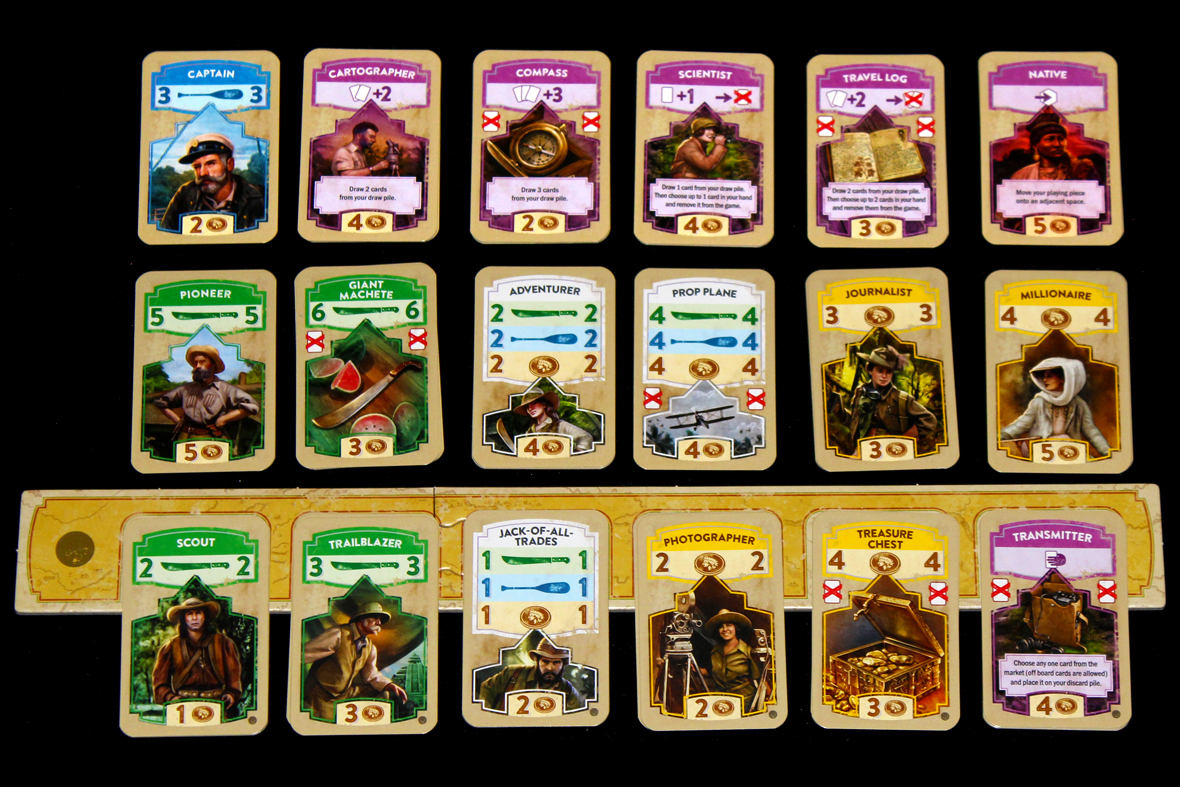 If you’re playing with the Caves variant, add two Cave tiles to every Cave on the board: 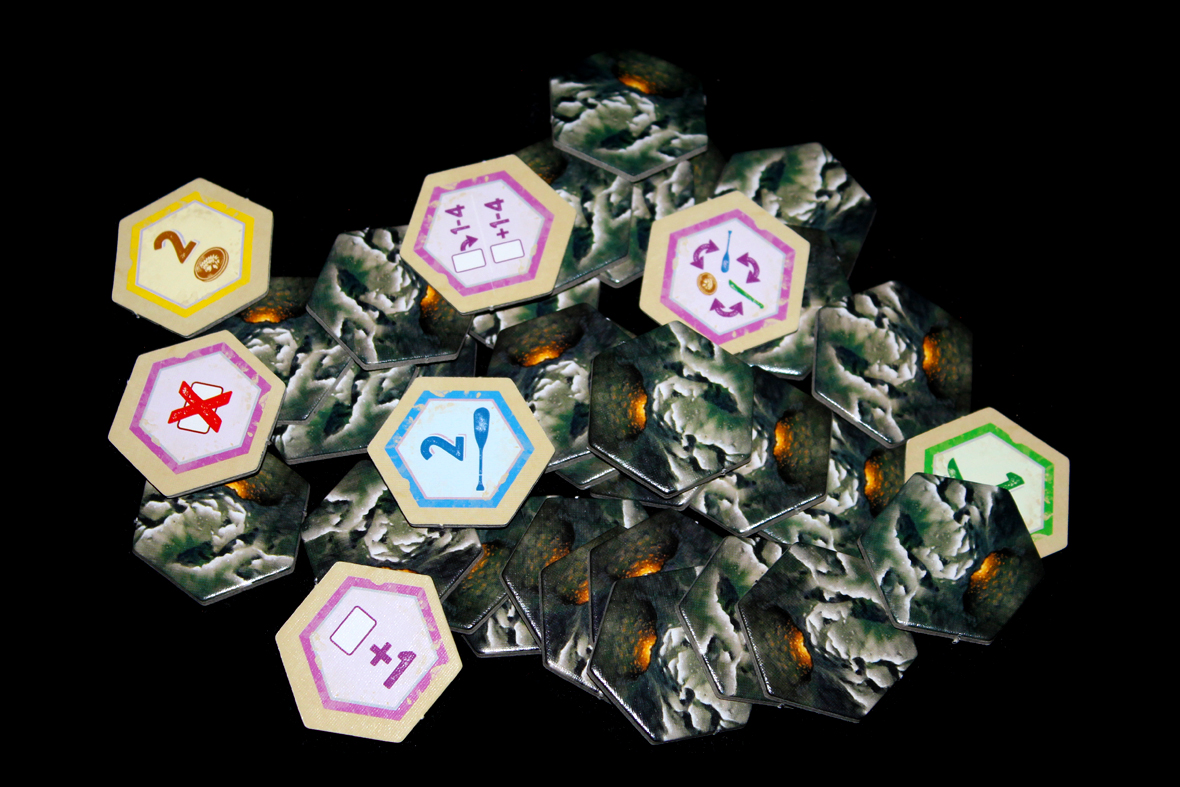 Once you’ve done that, shuffle your deck, draw four cards, and you’re ready to start!

Fair bit of setup, but the gameplay itself is pretty straightforward, as it’s a deckbuilder, like Dominion. On your turn, you will have four cards in hand, and you will play as many as you want. These cards will have a variety of symbols / effects. The primary three types of cards you will play are green (jungle / machete), blue (water / paddle), and yellow (village / coin). Each of those lets you move one pawn (this is important for two-player games) into a space with that symbol on it. An important caveat: you cannot combine cards to move onto a space of a higher value. For instance, a Photographer (2 money, though I think Photographers are worth more than that, personally) can move you onto a 2-coin space, but you cannot play 2 Photographers to move onto a 4-coin space. You can, however, play a Photographer to move through 2 1-coin spaces. Useful to know! You will also have to spend movement to make it through a blockade, but when you do, remove it from the board and keep it. It doesn’t block other players anymore, either! That’s so charitable of you.

Some cards have the “X” symbol on the sides of them:

These cards are single-use; you may play them but if you use their effects, they are immediately removed from the game. If you discard them for any other reason, they just go to your discard pile.

Some cards, like Jack-of-All-Trades, are one of anything, but you must choose each turn what you want to use it for:

Another thing you cannot do is move through a space with another player on it. You have to go around or wait for them to move. The jungle isn’t big enough for both of you.

Once you’ve moved as much as you’d like, you may spend money to buy one card from the Market and put it in your discard pile. You may not use any money that you used to move through village spaces this turn, as it’s already been spent. You may also discard any card from your hand to earn 1/2 coin per card. (If you discard cards that are trashed on use this way, they go to your discard pile, not the trash.) You may only buy cards that are in the first row of the Marketplace (on the board). If there’s ever an empty slot, you may buy anything in the Marketplace, but you immediately move that entire stack to the Market board to fill the slot. Now, other people can buy it too! …hooray.

At the end of your turn, discard as many cards as you want and then draw back up to four cards. You can save cards if you want to hoard up for a power turn down the line. If you end your turn next to a Cave tile (and you moved this turn), take a Cave tile and keep it face-up in front of you. You can use it on subsequent turns. If the spot’s depleted, you get nothing.

As you might guess, if you make it to El Dorado then you’re essentially done! This begins the final round. Put your piece on the golden city to indicate that you’ve gotten there first. If other players can make it to El Dorado, well, then you all arrived at about the same time, so whichever player took down the most blockades wins!

I like this at pretty much any player count. At two, you need to move both of your player tokens to El Dorado in order to win, so it’s pretty hectic and I like that a lot. There’s a lot more blocking, since you can sacrifice one of your people to keep the other player’s token held back, a bit. At four, everyone’s moving independently, so you don’t want to team up with anyone to hurt someone because you’re potentially helping a competitor. That said, you now have a lot more people to deal with, so certain actions / routes become more complicated. You gotta be more flexible at four, since your plans will probably go a bit awry.

I have no strong recommendation or preference for any player count. I’d be happy to play it at any.

Overall, The Quest for El Dorado is super fun! As mentioned, I really like the sense of progression you get through the game as you move towards the finish line. The racing component is super, as you’re never totally sure what your opponents are going to do or how they’re going to block you, so it’s pleasantly intense the entire time. Plus, the varied tiles and configurations don’t really reward experienced players that much (even though experienced players may be more familiar with the cards), as there are many different “good” routes (although there are a few places where bottlenecks can emerge). While it’s more complex than Kingdomino / Magic Maze, in my opinion, I still think it’s a really fun experience that’s worth a play, especially if you like deckbuilders and / or racing games!