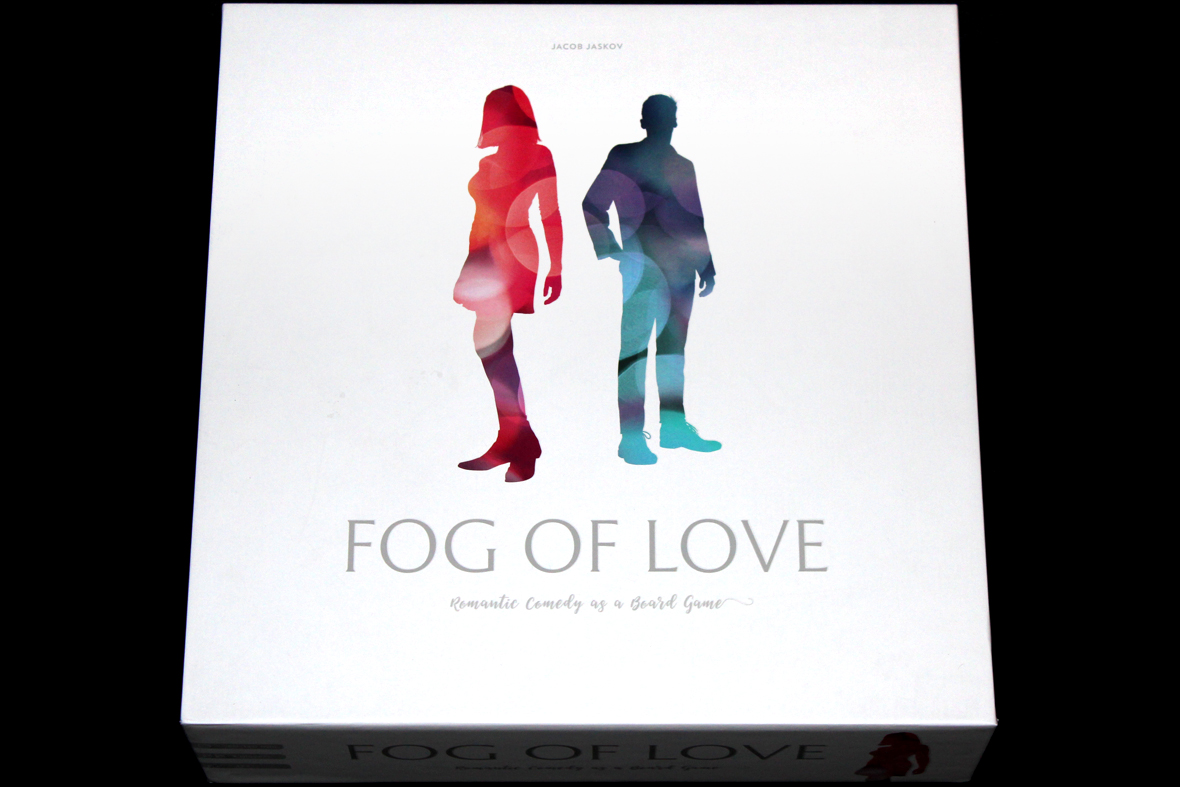 Full disclosure: A copy of Fog of Love was provided for review by Hush Hush Projects.

I think I’m finally at the point where I can just straight-up admit that theme tends to be the first thing to catch my eye in a game. If it’s off-the-wall or weird or fun I tend to take note, like Ice Cool or Millennium Blades, two games I always talk about. There’s also a special place in my heart for games with a narrative, like Near and Far or Above and Below. As you can imagine, this made me particularly interested in Fog of Love, the first game from Hush Hush Projects (and a Walmart.com exclusive, strangely enough).

In Fog of Love, you play a couple in a romantic comedy trying to figure out what their destiny is. Are you high school sweethearts, destined to stay together? Or is your relationship a tumultuous one defined by dramatic conflict and headed straight for the rocks? Well, only one way to find out.

No matter what you do next, you’ll need to set out the board, first:

For your first game, you should play using the tutorial. It will teach you everything you need to know and present game concepts in a way that makes a ton of sense, in my opinion. Look for this card:

Flip it and follow the instructions on the back.

For non-tutorial games, just do what I do. Give both players a character card:

With apparently a few exceptions in a specific scenario, your character’s gender doesn’t have any effect on gameplay, so whatever you want your character to be. Also, you get matching card holders:

As for the Destiny cards, don’t worry about them, for now: 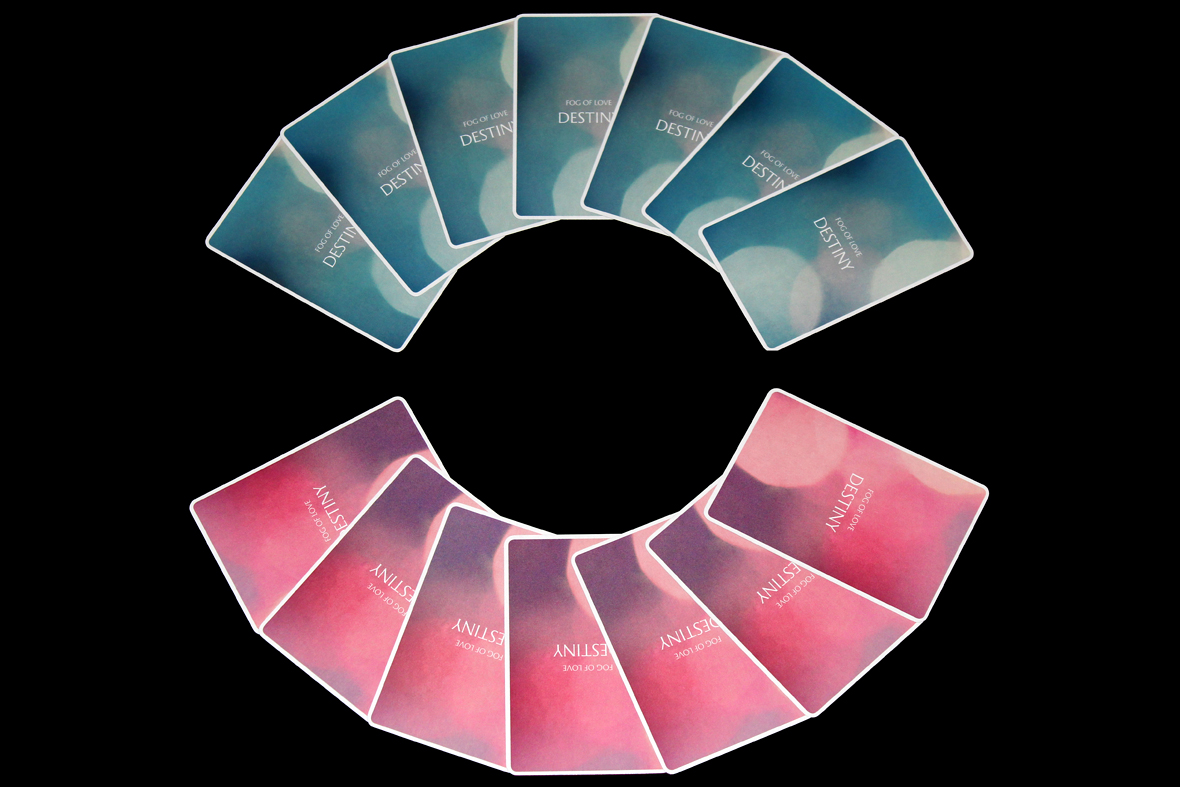 You’ll need to figure out which ones you need once you pick a Scenario:

There are four in the base game, with more coming soon. Give each player the tokens matching their player color:

Have each player put a token on the 0 on their Character card, to represent that they currently have 0 satisfaction with the relationship (that’s fine; it hasn’t started yet). Now set out the Events. There are three types: Sweet, Serious, and Drama:

You’ll note that they have symbols in the bottom-left corner that match the icons on the board, so put them on their respective piles. Similarly, there are Trait, Occupation, and Feature cards:

So put them on their respective spaces on the board. Usually this setup would involve a bit more, but since that requires some understanding of how the game works, I’ll include that in Gameplay. If you’ve gotten this far, you’re pretty much ready to start!

So, Fog of Love is a sort-of-roleplaying game with some “resource” management aspects, in that the resource that you’re managing is your personality and how that affects your relationship. In order to have the most fun, you’ll want to spend some effort playing your character, not necessarily playing you, the player.

The best way to do this is to start by understanding how your personality “works” in the game.

On the board, you’ll notice six different areas of your personality: Discipline, Curiosity, Extroversion, Sensitivity, Gentleness, and Sincerity. They each have a different color and symbol as well as up and down arrows. Over the course of the game, certain cards will push you in one direction or another (symbolized by an up or down arrow with that color and symbol). To represent that, put one of your tokens on either the up or down arrow, like so:

These contribute toward what’s called your balance, which can be individual or shared, depending on the card asking about it. For your individual balance in a personality dimension, add your up arrow tokens and subtract your down arrow tokens. For your shared balance, as you might suspect, add your partner’s and your up tokens and subtract your parter’s and your down tokens.

To use this to segway into the last bit of setup, you’ll need to be at certain levels in certain personality dimensions to make your Trait Cards work. Deal each player 5 Trait cards and let them choose 3 to keep hidden from the other player on the helpfully-included card holders:

Fulfilling these Traits by the end of the game will earn you satisfaction, whereas failing to do so will lose you satisfaction. How much is determined by the Scenario Card, which I’ll cover in a bit. Note that, as you might guess, picking two Traits with opposite goals means one of them is literally impossible to get. There is another thing: picking two Traits with the same goals means that one of them is doubled at the end of the game. Thankfully, you get to pick which one, but it’s still one of them. Be careful.

Other cards will give you points in your personality dimensions, like your Occupation:

Deal each player 3 and let them pick one.

Now this is about where you should start the roleplaying part of this game. The third set of cards you draw are the Features, yes:

But you don’t play them. Instead, you draw 5 and you must play three on your co-player. These are things you first noticed about the player when you fell for each other. Add a bit of flavor! Tell your co-player why you noticed these features. Your co-player should update their personality dimensions for each card, but take turns playing them on each other.

Once you’ve done that, you’re about ready! Introduce your character to your co-player, and have them do the same. Now, check the Scenario Synopsis card to see what you need to do. It’ll tell you not only how much satisfaction you get (or lose!) from traits, but also what your starting hand will be. Draw the Event cards specified and then you’re ready to play!

The actual gameplay portion of this is pretty straightforward: You start by flipping Chapter One face-up onto the board, and then you progress from there. Generally, Chapter One is an Event that’s a Both Choose event, which is pretty fun. For Both Choose, both players take their choice tokens: 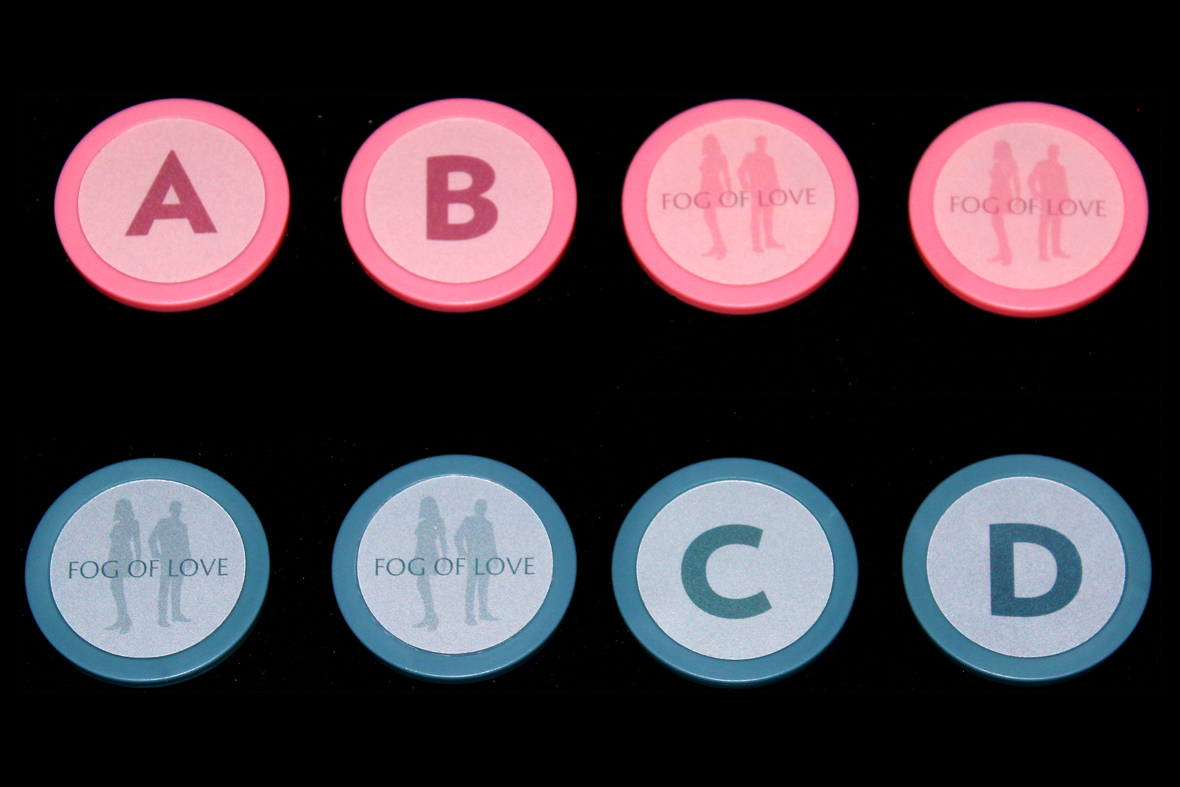 They choose one of the options and place it face-down on the Choice space on the board. When they’re ready, they reveal! You resolve the card by checking the conditions on the lower half.

The other type of Event is Partner Chooses, in which your co-player makes the decision. For both event types, CHOOSER is typically the person making the choice, and OTHER is the person who did not make the choice. Note that on a Both Choose event you can be CHOOSER and OTHER (as your co-player is the OTHER relative to your CHOOSER and vice-versa).

Anyways, you’ll play Events in turn until you reach the Chapter Limit, specified on the Chapter card. Place the events such that you can see the bottom part (stagger them somewhat), as it’s useful to see the names and if they’re certain kinds of events.

Some Events are played in different ways:

Some Event Cards (and some Chapter Cards) will affect your Destiny Cards. They will have some words on them that you need to know:

As you might guess, if you don’t have the named Destiny in your hand or in your discard, relative to the event, nothing happens. One important thing is that you can never have fewer than two Destiny cards in your hand. If you were to discard a Destiny when you only have two in hand, ignore that effect. Gotta keep your options at least somewhat open.

At the end of each turn, draw back up until you have 5 Events in hand. If you’re not sure which pile to take from, check the Chapter. 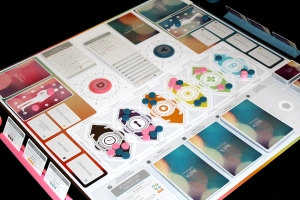 Play continues back-and-forth like this until the Chapter Limit is hit, at which point you discard the Chapter card and all the Events played on it. Now, reveal the next Chapter and resolve that. Continue playing until you hit the Finale!

It’s a two-player game, yo.

Overall, Fog of Love isn’t quite like any game I’ve ever played. Sure, it has things I love about games (great art, superb graphic design, a rock-solid tutorial), but this isn’t like a “X, but with Y” that you often see in the gaming sphere. The closest comparison I’d draw is to Near and Far, but even there the narrative isn’t quite as much of the game as it is in Fog of Love. That’s a significant advantage if you enjoy narrative-driven games, as you can roleplay your character and dig very deep into their motivations. On the other hand, if that’s not to your liking, then this will very much not be the game for you. In Near and Far / Above and Below, you can mostly ignore the narrative if you’d like and focus on the game, but in Fog of Love the narrative is the game. To play the game is to buy into the narrative, and to ignore the narrative is to fundamentally not participate in the world the game seeks to create. I think that’s a really interesting premise and I’ve enjoyed what I’ve played of it (a lot!), but I can wholeheartedly say this is not a game for everyone.

But you know what? No game really is, and that’s okay.