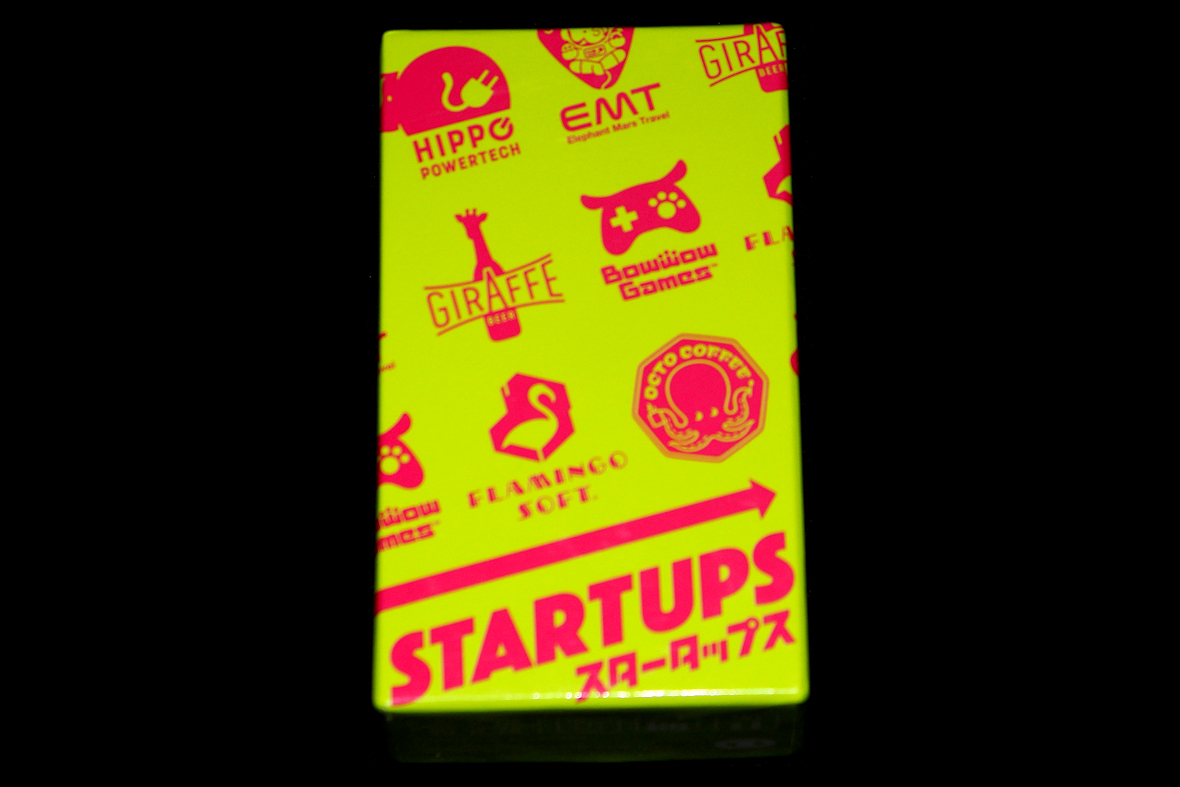 Have you ever wanted to run a major company? Or did you watch Iron Fist and conclude that corporate intrigue is kind of boring? If it helps, I think that might just be Iron Fist, because running a company in a board game can be interesting! Enter Startups, another game from the Oink Games line of tiny-boxed games. In Startups, players are competing to gain the majority share in companies in order to gain the most money. Can you become the best investor?

You’ll want to set out the Anti-Monopoly chips: 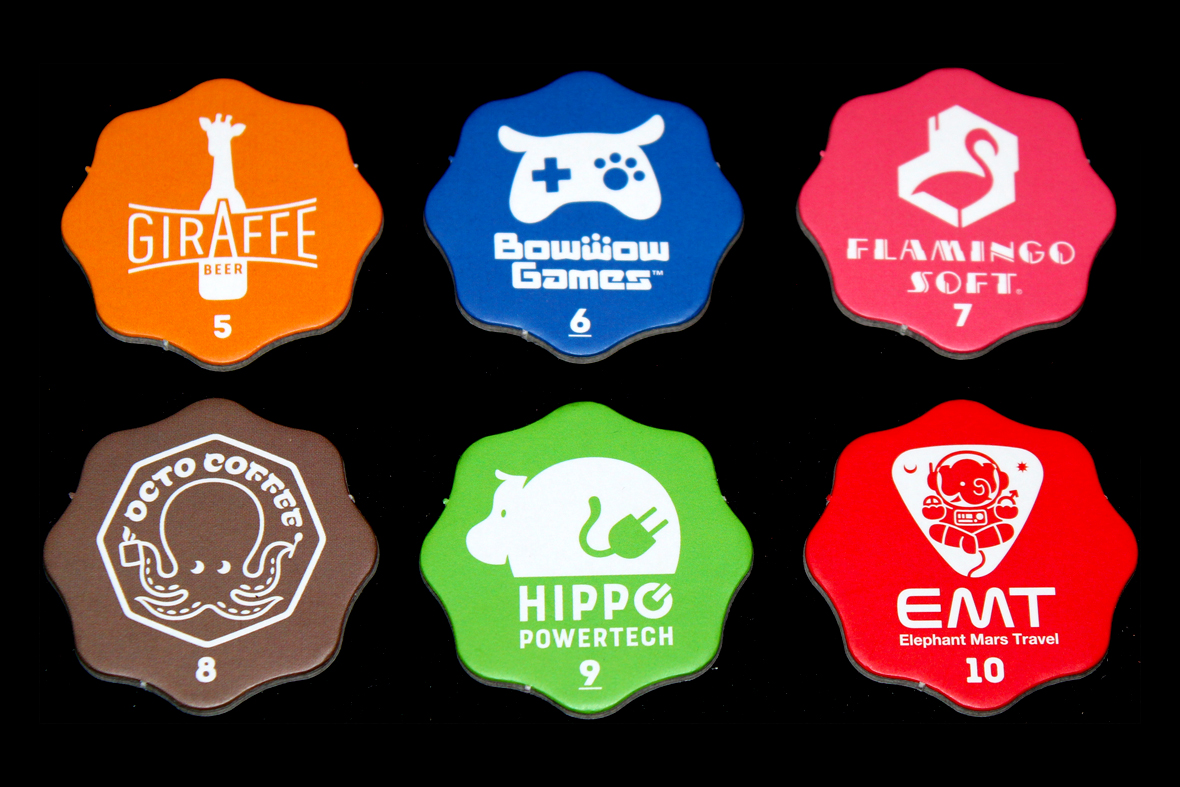 I’ll talk more about those later. Next, give every player 10 money: 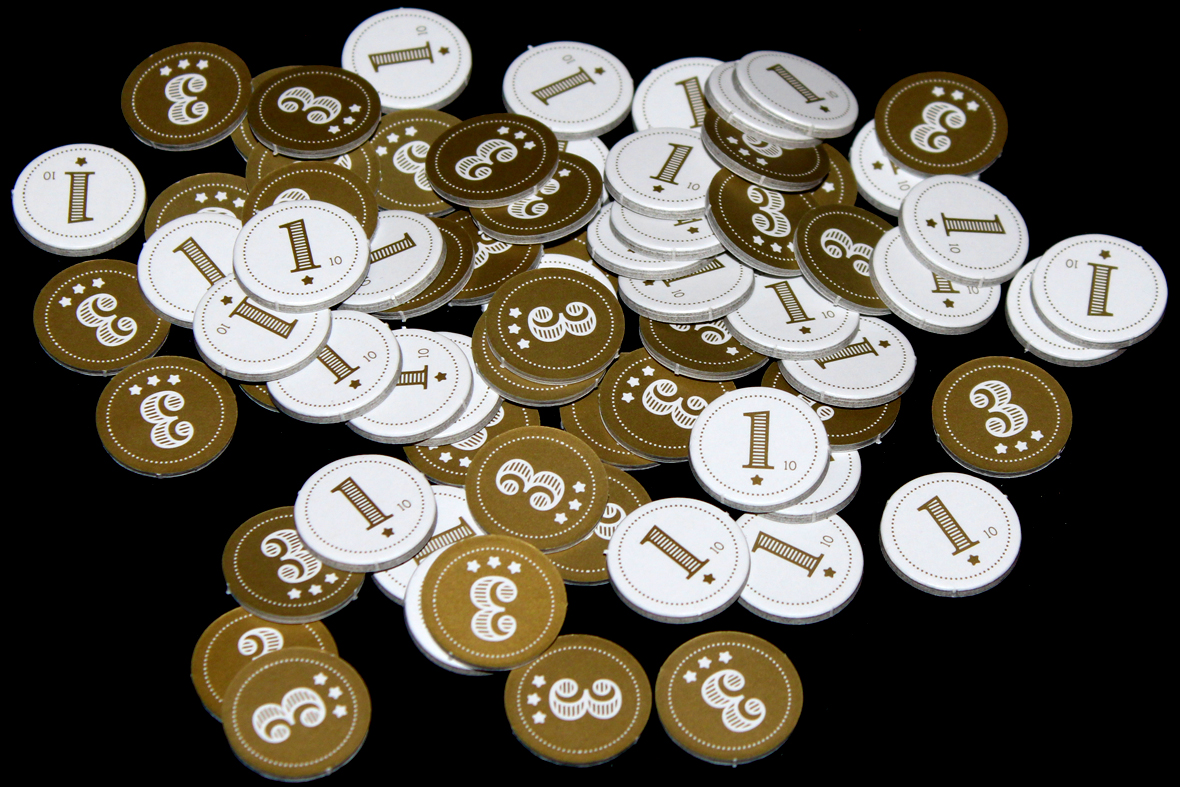 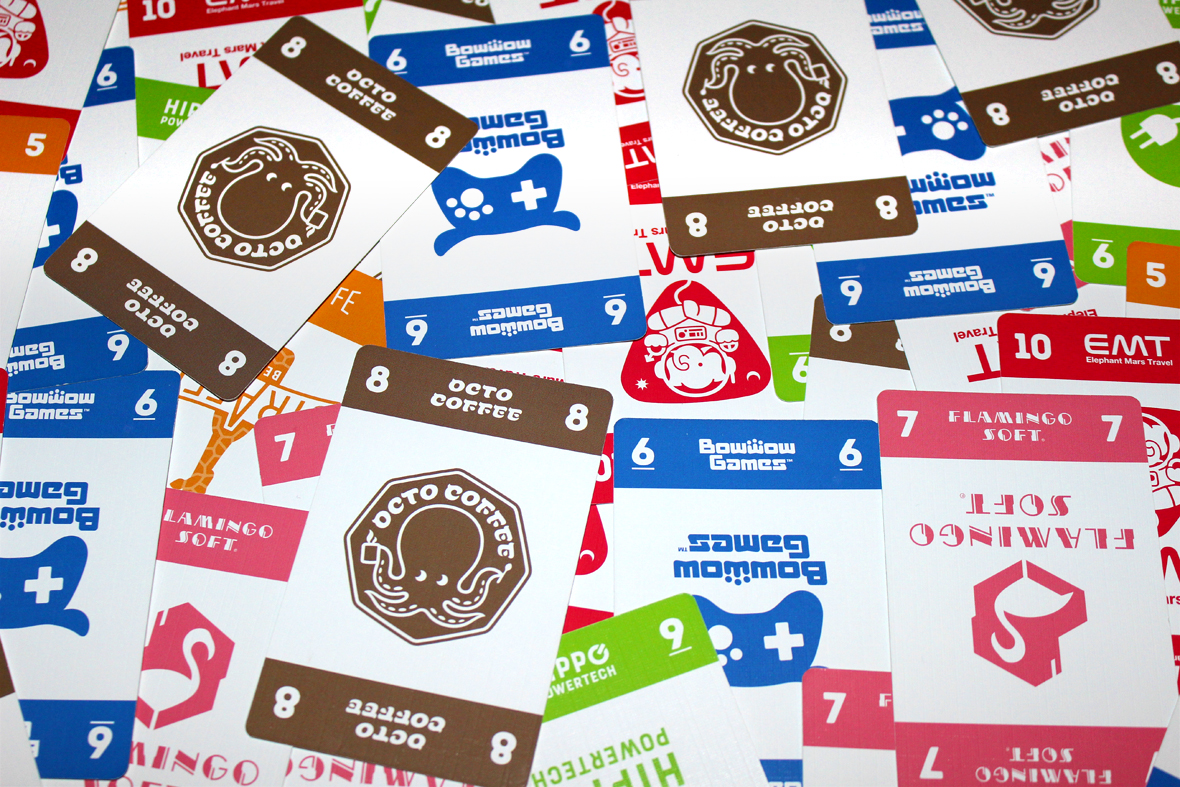 Deal each player 3 cards, and then remove 5 cards from the game. Nobody should see the five removed cards. The 3 cards comprise each player’s starting hand. Place the remaining cards in the center, and then you’re ready to start! 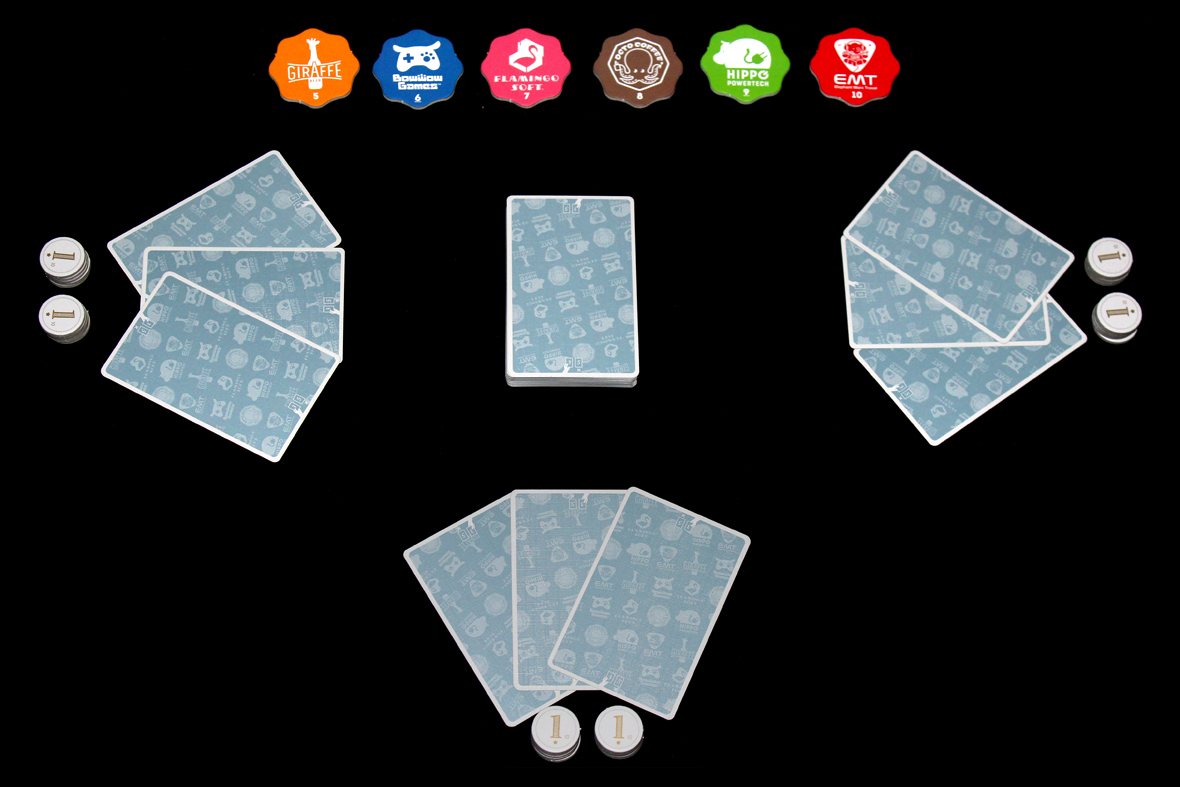 Game’s pretty simple to play. On your turn, you’ll have two choices:

So, when you draw a card from the deck you must first place a coin on every card in the Market unless you hold that card’s Anti-Monopoly chip. But how do cards even get to the Market? Well, when you take a card, you can either play one of the four cards in your hand in front of you or put one of the four cards in your hand face-up into the Market, which is the area around the deck. Once you do that, your turn ends. If you play a card in front of you such that you have the most of that card, you take that card’s Anti-Monopoly chip (even if another player currently has it).

If you choose to take from the Market, you cannot take a card if you hold that card’s Anti-Monopoly chip. It’s there to prevent you getting a monopoly, so, it’s doing its job. If the card you take has money on it, you gain that money. Nice! Like drawing from the deck, you add the card you took to your hand and then choose to return a card to the Market or play a card face-up in front of you. You cannot return a card of the same type as the card you took to the Market. That’s just a non-action. Don’t do that.

Play continues until the last card is taken from the deck. At that point, add every card in your hand to your tableau.

Now, starting with Giraffe Beer (5), the player with the most of each card type gains money from other players. If I have three Giraffe Beers and you have two, you give me two money — one for each card you have. That’s rough. It’s made worse by the fact that you flip the “1” coin over to its “3” coin side when you pay another player — every money you give someone else is worth 3 points, end game. Note that you can’t give “3” coins to other players — if you run out of “1” coins during this phase, you don’t pay anyone else anything.

You may be wondering what happens in the event of a tie for most shares of a company. If that happens, nobody gets paid. That’s pretty much the worst.

Once you’ve settled all the money, whichever player has the most money wins! You can play this similar to Maskmen and add a multi-round option where 1st place gets 2 points, 2nd place gets 1 point, and last place gets -1 point, but … just play another round if you want to do that.

At higher player counts it’s a lot more chaotic, since it really comes down to what cards you have in your hand. If I were to have 3 Bowwow games in my hand, the best another player could do is tie me, and there are a lot more people taking turns and taking cards in between. I’d say I probably like this best in the 3 – 5 player range, but I don’t think 6 or 7 players is bad. It’s just large. 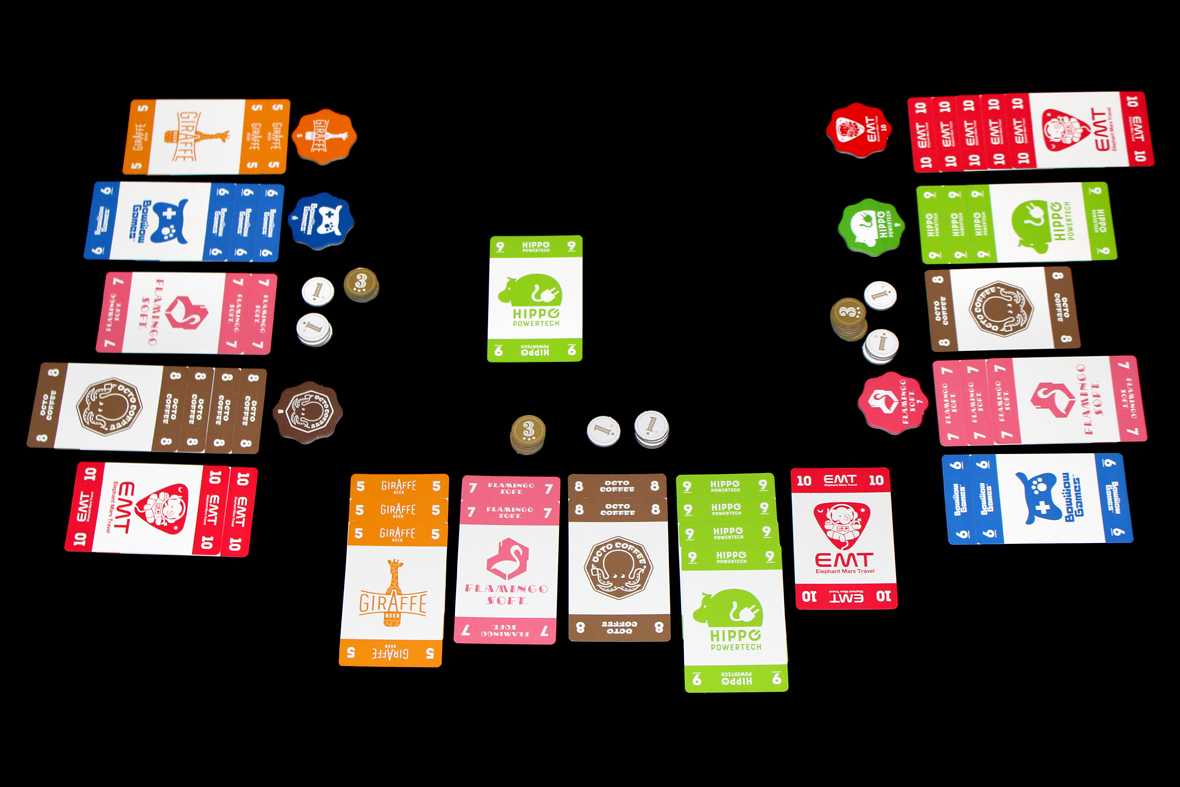 Overall, I’m quite fond of Startups. I’ve played it a bunch, it’s never been bad, and I’ve always had fun with it. It’s a very simple concept for a game that remains interesting throughout the entire round, which I appreciate. There are just enough unknown things to make the game interesting, but you consistently have a lot of influence over your own hand, allowing you to have a bit of strategy. Sure, you might get unlucky one round, but the game is fast enough that you can just shuffle the cards, redeal the coins, and try again. I’d recommend giving it a whirl if you’re looking for a nice, simple card game that supports a wide variety of player counts.