Full disclosure: A review copy of Topiary was provided by Renegade Game Studios.

Still here for games with random themes, and this is certainly out there. Topiary pits you as rival … shrubbers? attempting to impress guests at your botanical garden with your mastery of botany and other plant-related arts. Sure, the other shrubber’s planted a T-Rex, but you planted an even larger one right in front of his out of casual spite. As any self-respecting shrubber would do. Will you be able to come out on top …iary?

Mmm. Not sure if I’m going to stick with that pun.

Anyways, setup is dead simple. There are 8 different kinds of tiles, each numbered 1 – 5:

If you’re playing with 2 or 3 players, remove all tiles of one type. Pick whichever topiary displeases you. Otherwise, shuffle them up:

Place them in a 5 x 5 grid, face-down, and deal the players each three of the remaining tiles to form their starting hand.

Let every player take pieces in their chosen color:

You can set aside the scoreboard and the score tokens for now:

Now flip over the center tile and you’re ready to begin! 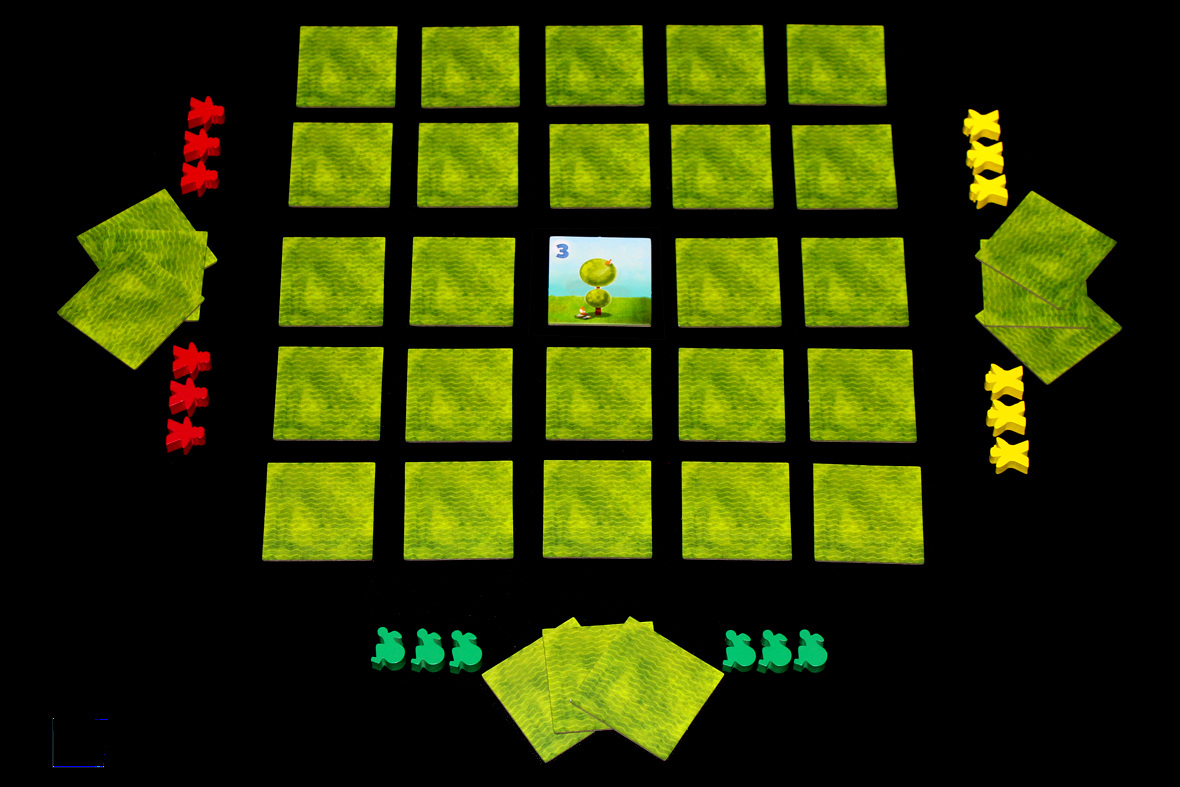 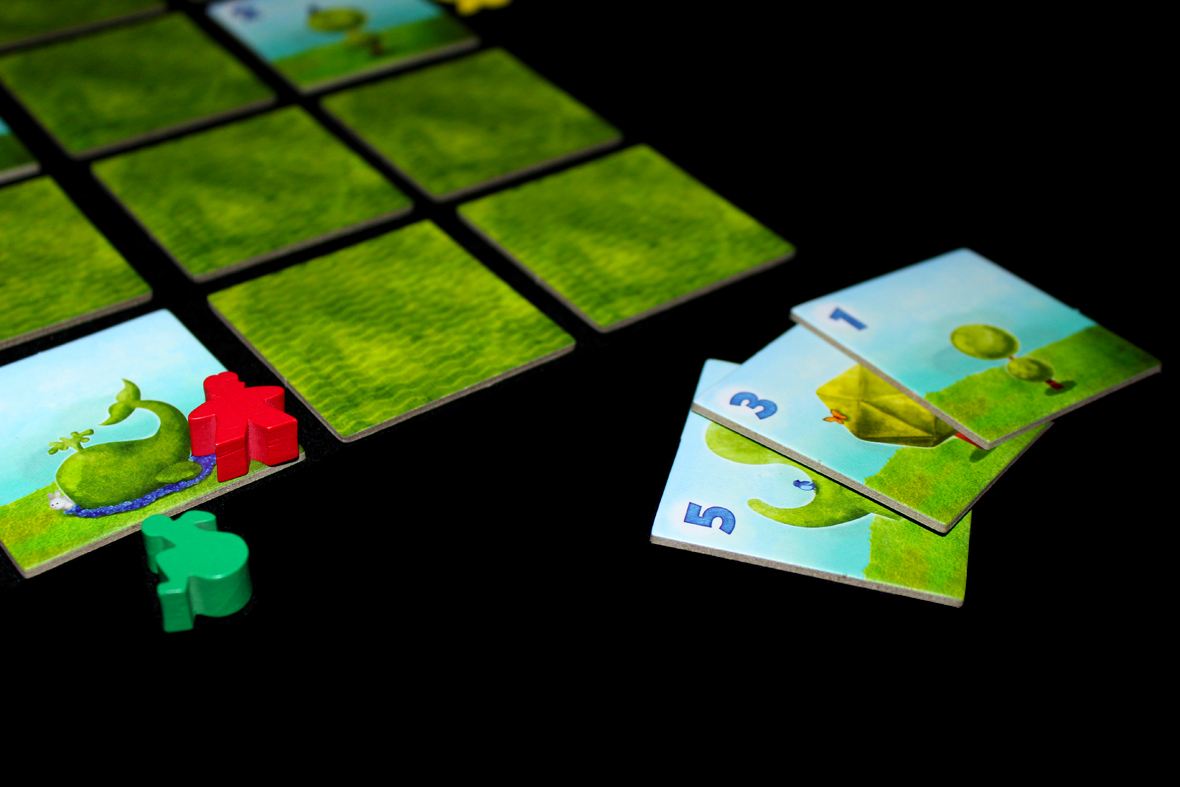 A game of Topiary takes place over several rounds. In each round, you take two actions (the latter is pseudo-optional):

Play until everyone has used all of their visitors. Then you score! I find it easiest to score the third thing first.

Anyways, score your visitors and the player with the most points wins!

Topiary scales pretty nicely with player count, in my opinion. I will say that the drafting variant doesn’t hold as much water at three players, as there’s kind of no point in looking through just the extra tile that’s left after you deal out tiles. That’s a pretty small thing, though, as it’s good at any player count. I have no strong preference, here. 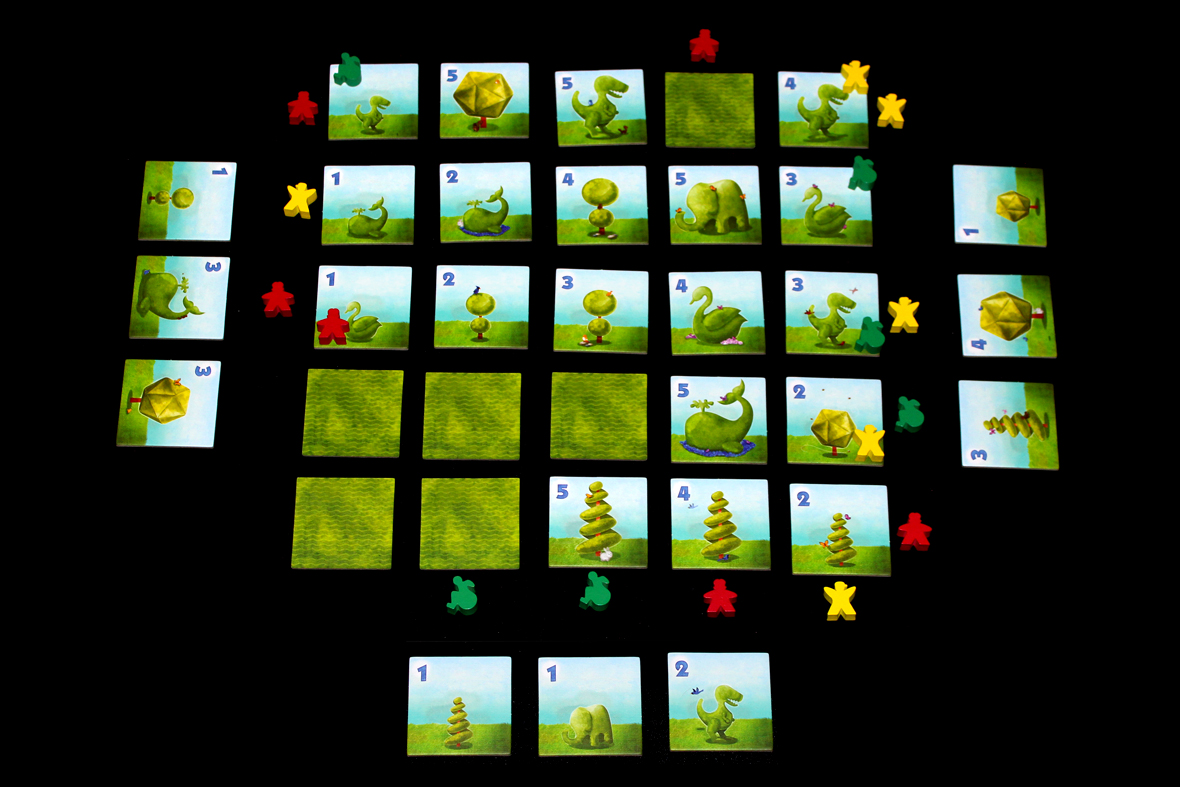 Overall, Topiary is very good! I’m a big fan of the theme, which naturally pushes me to like the game a bit more. The art is endearing, the gameplay is thinky and blocky without being too aggressive for me, and it’s a light, simple game that’s easy to teach and fairly straightforward to play. The scoring is a tiny bit irksome because there’s a lot of numbers to keep track of, but that’s how it goes, sometimes. If you’re looking for a nice, light abstract game to add to your collection or if the idea of cutting hedges into the shape of a T-Rex excites you as much as it excites me, I’d highly recommend giving Topiary a whirl! It’s a lot of fun.