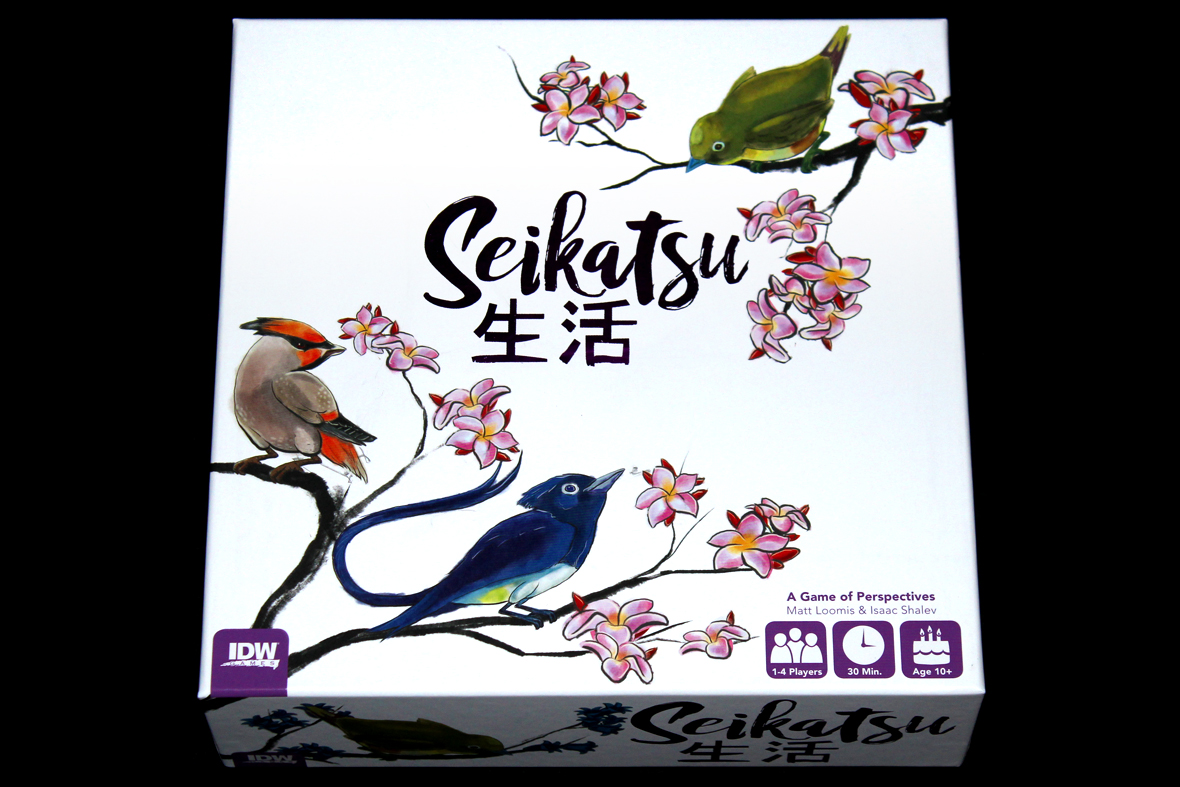 Full disclosure: A review copy of Seikatsu was proved by IDW Games.

Alright, let’s roll back around to another IDW game. This one’s gonna be a good mix of two things that you’ve seen before, around here: kind-of-abstract games and games that involve birds in some capacity. That said, I think the only bird game I have is Ice Cool, maybe? Unless you count Near and Far‘s pack birbs.

In Seikatsu, you are tending a garden near one of the pagodas you are in charge of. Unfortunately, you share this garden with your opponents, and all of you are competing to have the best view from your pagoda, kind of like Topiary. You want to plant flowers that will attract flocks of birds without ruining the aesthetics of your view. As one does. Will you be able to have the best view of the garden?

Alright, the first thing to get out is the board: 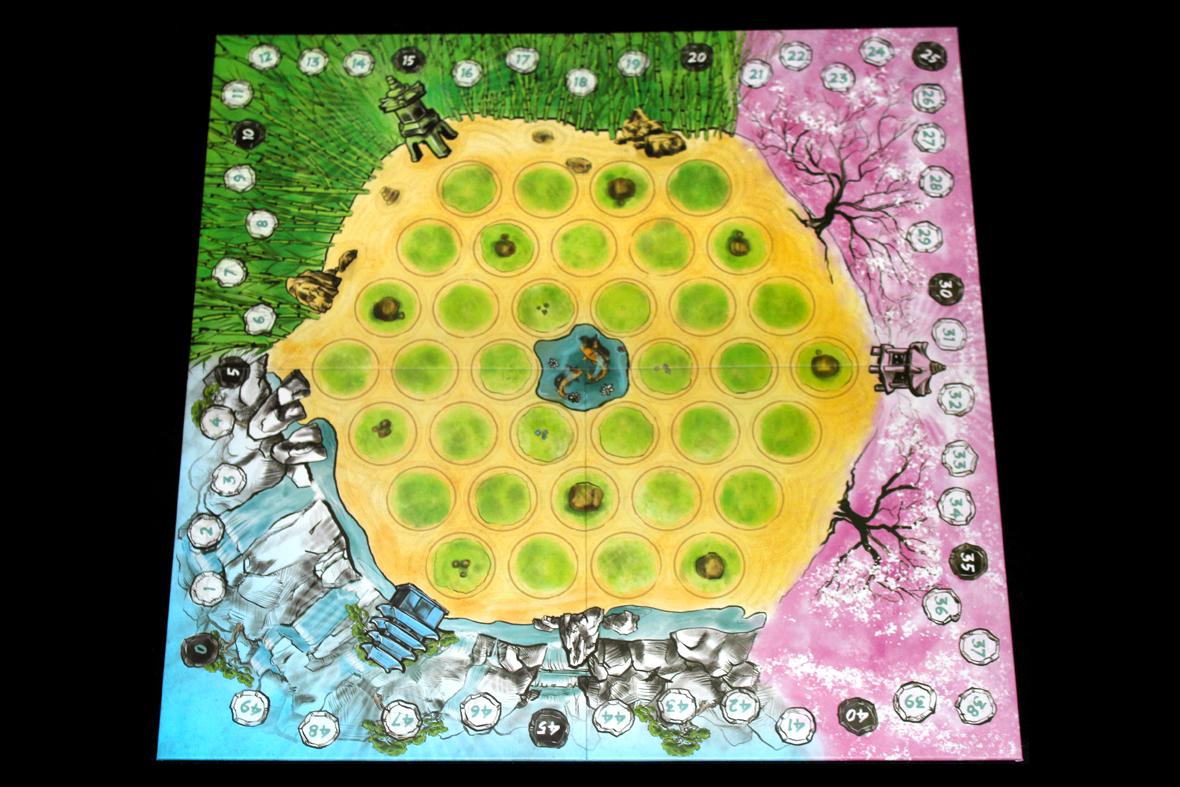 Your first point of order is to orient the board so that each player faces a pavilion. If you have one or four players, well, I’ll cover that later.

Place the Scoring tokens on the 0 on the board:

Set them aside for now, and add the other tiles to the bag:

Draw one tile from the bag for each player you have and place them on the pavilions matching each player.

Add the Koi Pond tiles back to the bag and mix it around — you should be ready to start! Give each player two tiles to have in their “hand”, and keep them face-down. 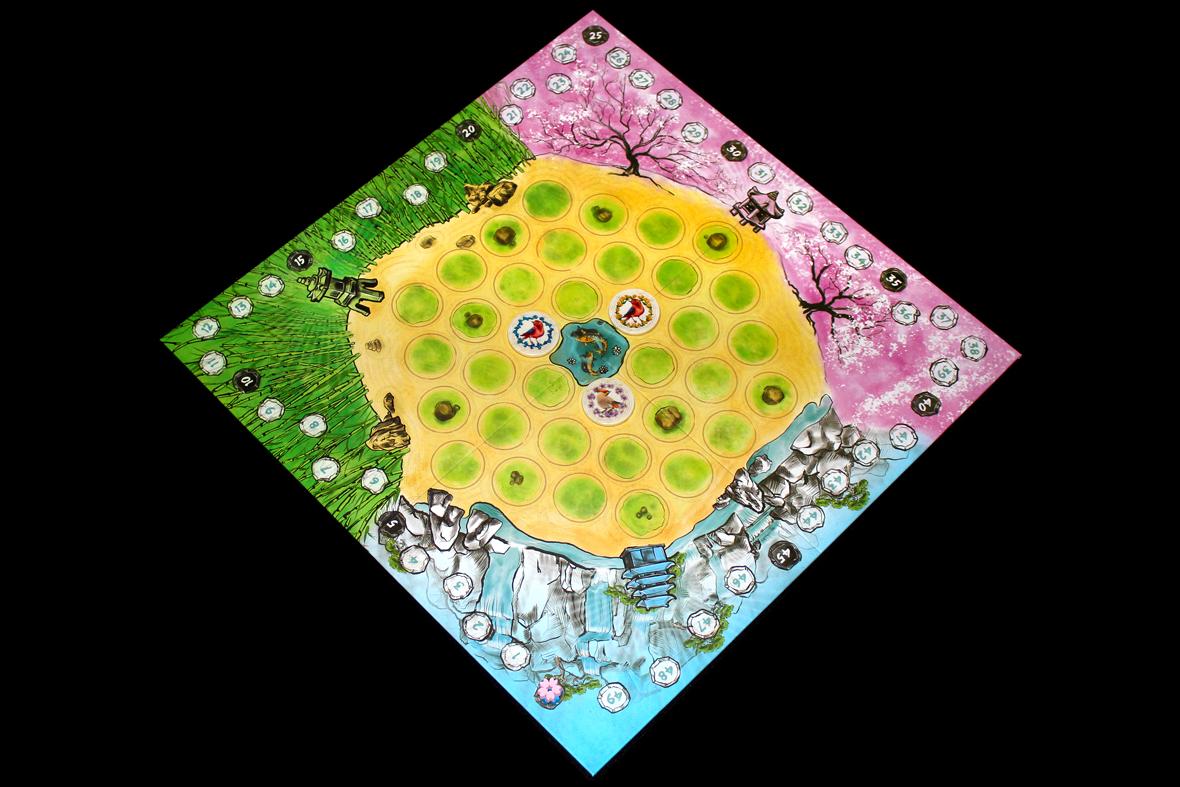 At four players, you’ll basically play the two-player game, but in teams. The setup changes mildly, as well. Put a tile on the blue flower and the pink flower, and then put a tile on either side of the green flower, but not on the green flower. Then, each player gets two tiles and you’re ready to start: 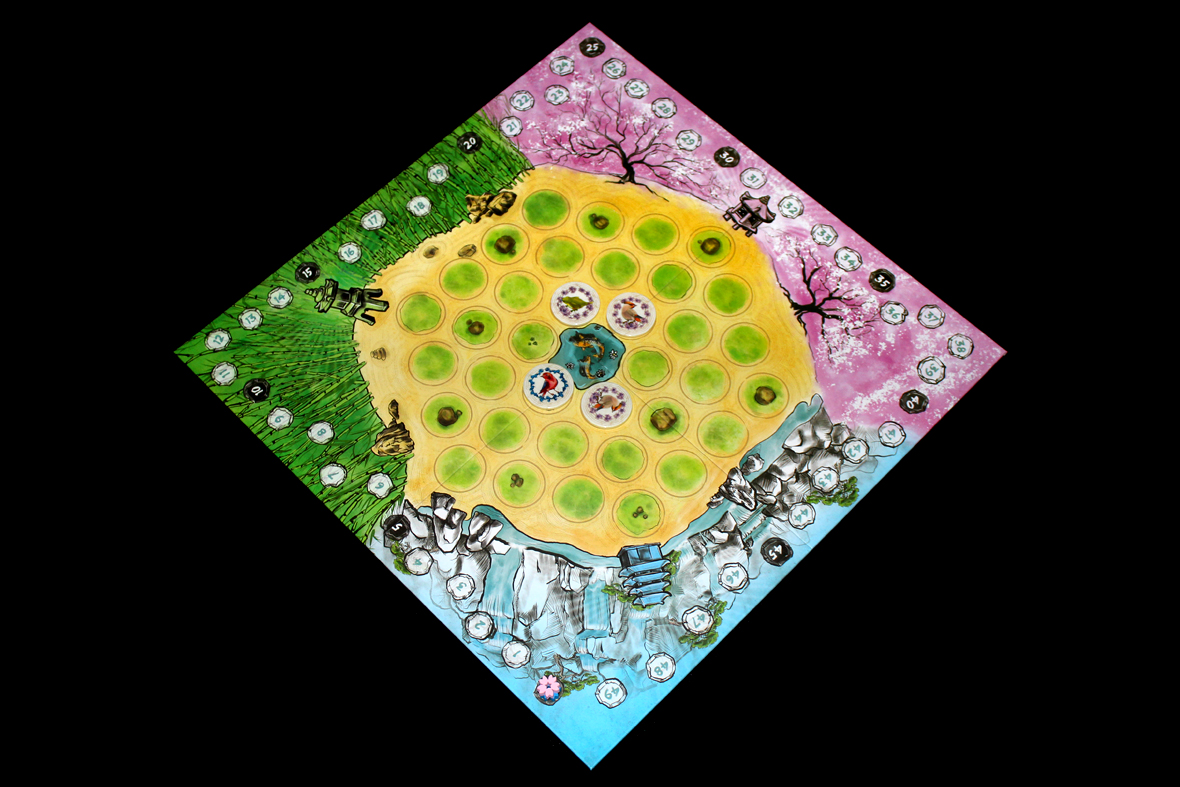 For a solo game, you’ll do pretty much the same thing as you do for a three player game, except you keep the Koi Pond tokens.

When you draw tiles to set up the initial placement, make sure that all the flowers are different colors. If they’re not, discard and redraw tiles until they are. Put the discared tiles back into the bag.

So, in a two-, three-, or four-player game, you pretty much play about the same way. On your turn, you play a tile from your hand to any empty space on the board that is adjacent to an existing tile.

If you place one of the Koi Pond tiles, it counts as any bird, but only when it’s placed. On subsequent turns, it’s just … a fish. I suppose you just got confused the first time you saw it.

Draw a new tile from the bag at the end of your turn. Play continues until every tile has been played. 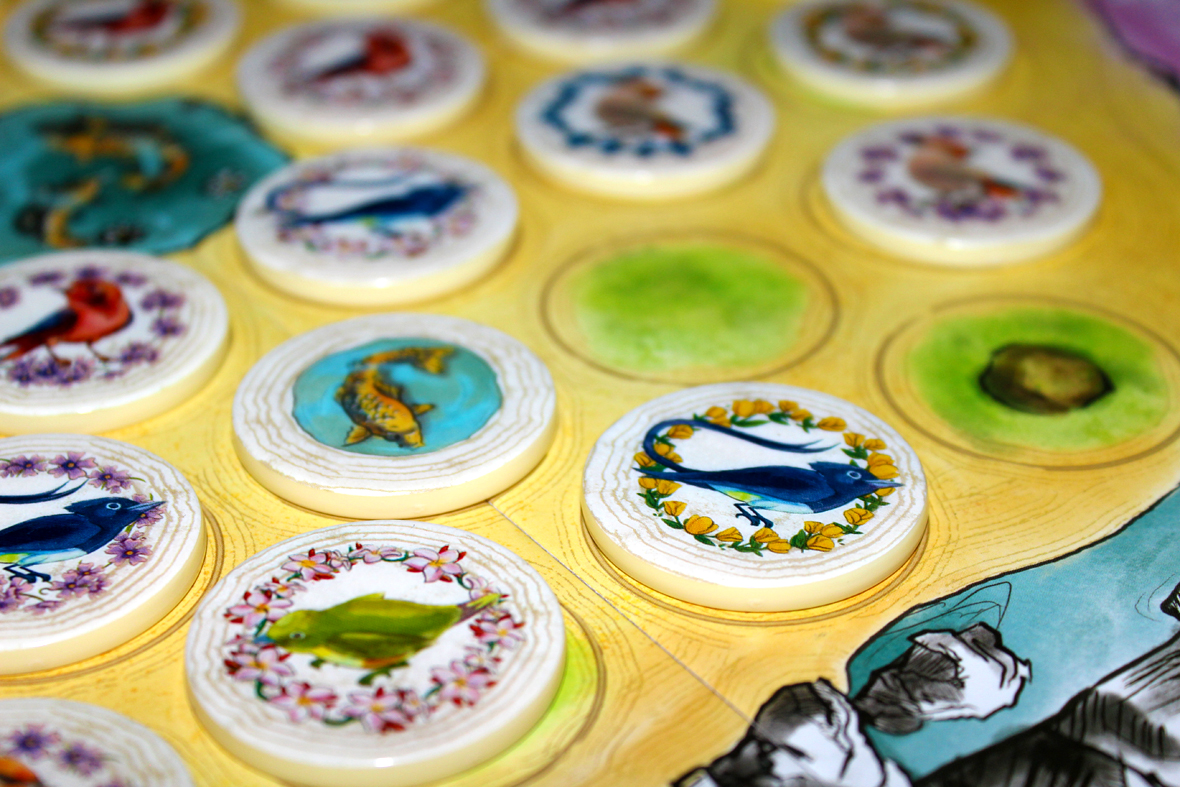 Once the last tile has been played, the game is over. Now, you’ll score the columns of flowers, next. From each Pavilion, you should have columns of flowers extending away from the Pavilion. Each row scores points for the number of flowers in the largest group of flower of one type in that row. Note that the flowers do not have to be adjacent to each other in order to score. You score each column seperately and as follows:

For this step, Koi Pond tiles count as whatever flower you’d like. Each player may score a Koi Pond tile as a different flower, if they so choose.

The solo game is a bit harder. You will still be playing very similarly to the regular game, but instead of two tiles in your hand, you’ll only have one. Also, when you play, you must play adjacent to your previous play. This means you run the risk of locking yourself in with no legal moves. If you do so, the game immediately ends and you move on to scoring without filling in the empty spaces. Note that that might make your board look like this:

When scoring, you score your columns for your Pavilion, as normal. However, you’re competing against the game, which scores the other two Pavilions’ combined value. Ouch.

I didn’t mention flock scoring, as that changes based on your difficulty level:

If you can exceed the game’s score, you win!

I haven’t really played it at four — it’s got a similar vibe to Apotheca or Santorini where I don’t think the team variant is really my personal truth or style. At one it’s pretty solid, and the variable difficulty is nice. At two it’s very strategic and at three it’s a bit more chaotic since it’s going to be harder to control as many of the columns as you’d like.

If you like team games, give it a whirl at four. Otherwise it’s pretty good at any player count. 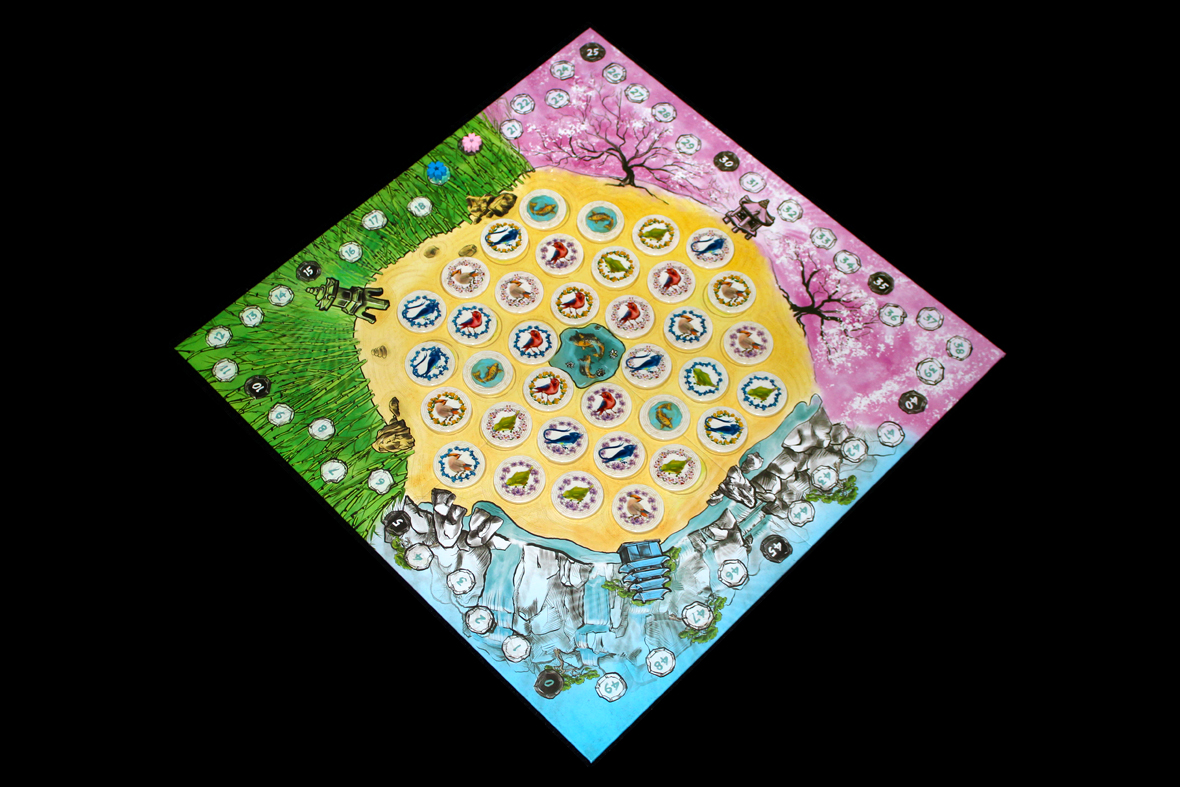 Overall, Seikatsu is great! I’ve had a lot of fun with it and it’s a game I’ll regularly recommend if we have a few people sitting around and we’re looking for a short-but-not-filler game. The board is nice, the pieces have a nice heft to them, and it’s a quick, smart game. I’m a big fan of the box art — the purple against the white is quite striking. The rest of the box I’m not as high on, mostly due to the size relative to the contents, but that’s a thing that I generally get pretty testy about on both ends (though I’d argue a box that’s too big is better than a box that’s too small). That aside, it’s an interesting game with a nice peaceful theme, and I’d totally recommend checking it out!