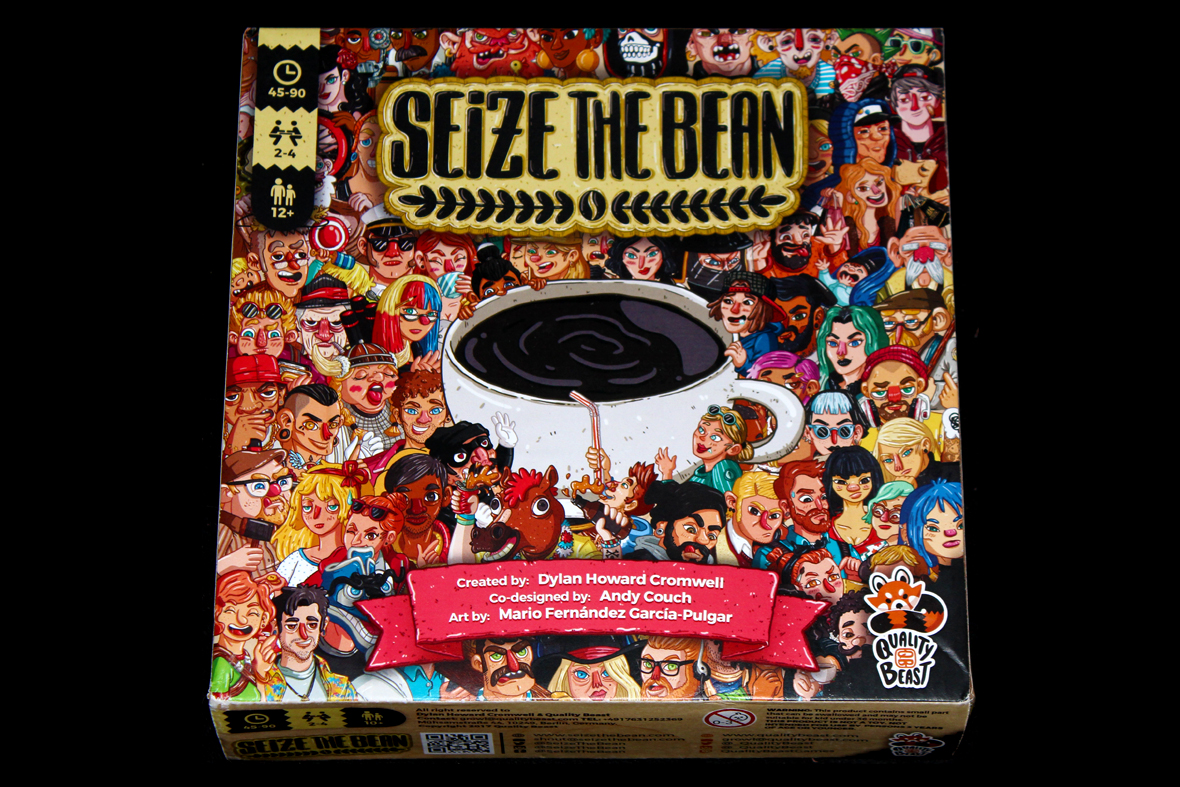 Full disclosure: A preview copy of Seize the Bean was provided by Quality Beast. Some art assets are not present in the preview copy, and some mechanics, art, and other … stuff may be added or removed between now and the game’s fulfillment, as this is a preview of a currently unreleased game.

Speaking of weird themes, here’s a game for me, someone who neither drinks coffee nor travels much; a game all about opening up a coffeeshop in Berlin! The premise intrigued me and I’m always here for a deckbuilder, so here we are.

In Seize the Bean, as mentioned, you’ve gotten super into this idea of becoming a barista and opening your own place and striking it rich as a barista, in what can only be called a both practical and obviously straightforward idea. Unfortunately, as bad luck would have it, anywhere between one and three other coffee shops have just opened up on your street as well! It’s variable. You’re going to have to out-coffee your opponents to build hype, get customers, and get good reviews! Will you be able to become the greatest coffee shop? Or is trouble the only thing that’s brewing?

Setup is a bit of a bear, so just kinda get through it.

First, set the resources into small containers (I believe these will ultimately come with the game). There are three major types. Coffee beans:

The mug’s not included but it’s so cute~

These are somewhat predicated on the game hitting a stretch goal, but I’m fairly confident that will happen, so, I’m going to carry on as though it already has. If you’re playing with the Scoop, put the Scoop into the coffee bean container:

Next, we’ll work on setting up the City. In the city, you’ll find customer groups:

Shuffle 5 sets together for a two-player game, or 6 sets for a three- or four-player game: 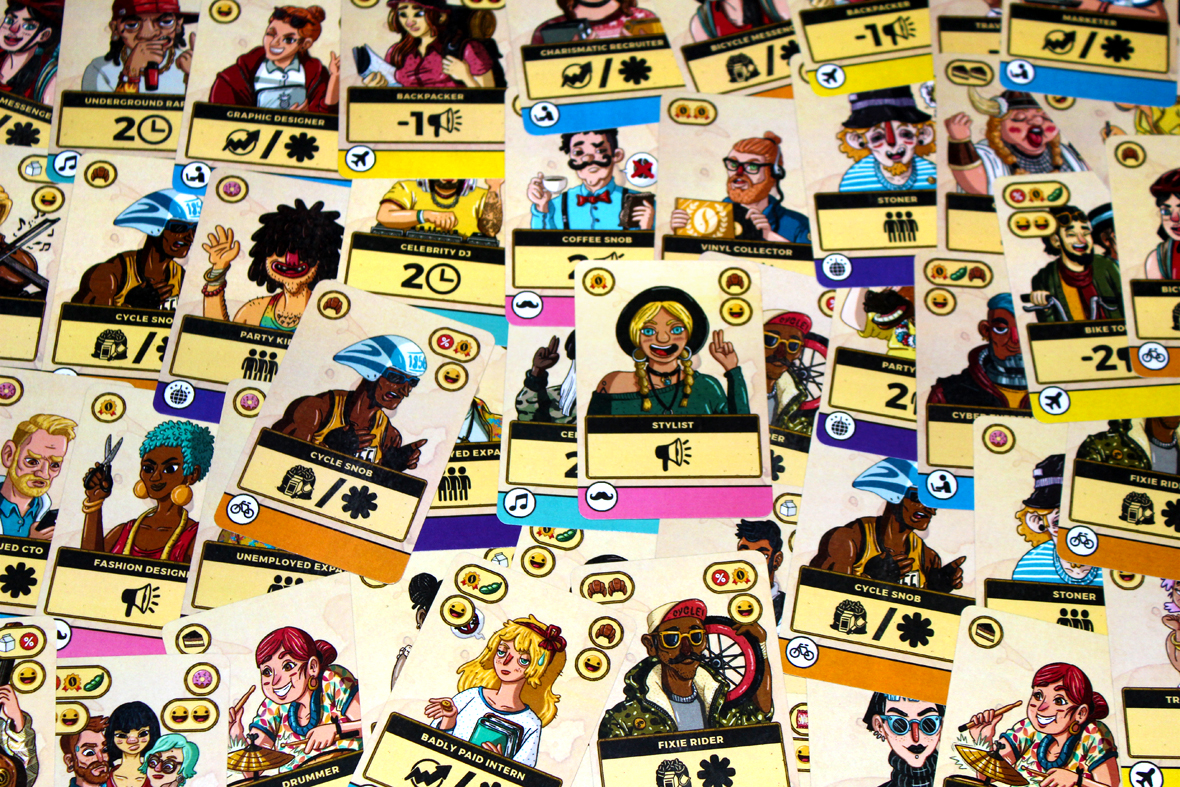 Place the deck in the center of the play area and flip five cards over, face-up.

Shuffle up the products (there should be a set of products for each customer group): 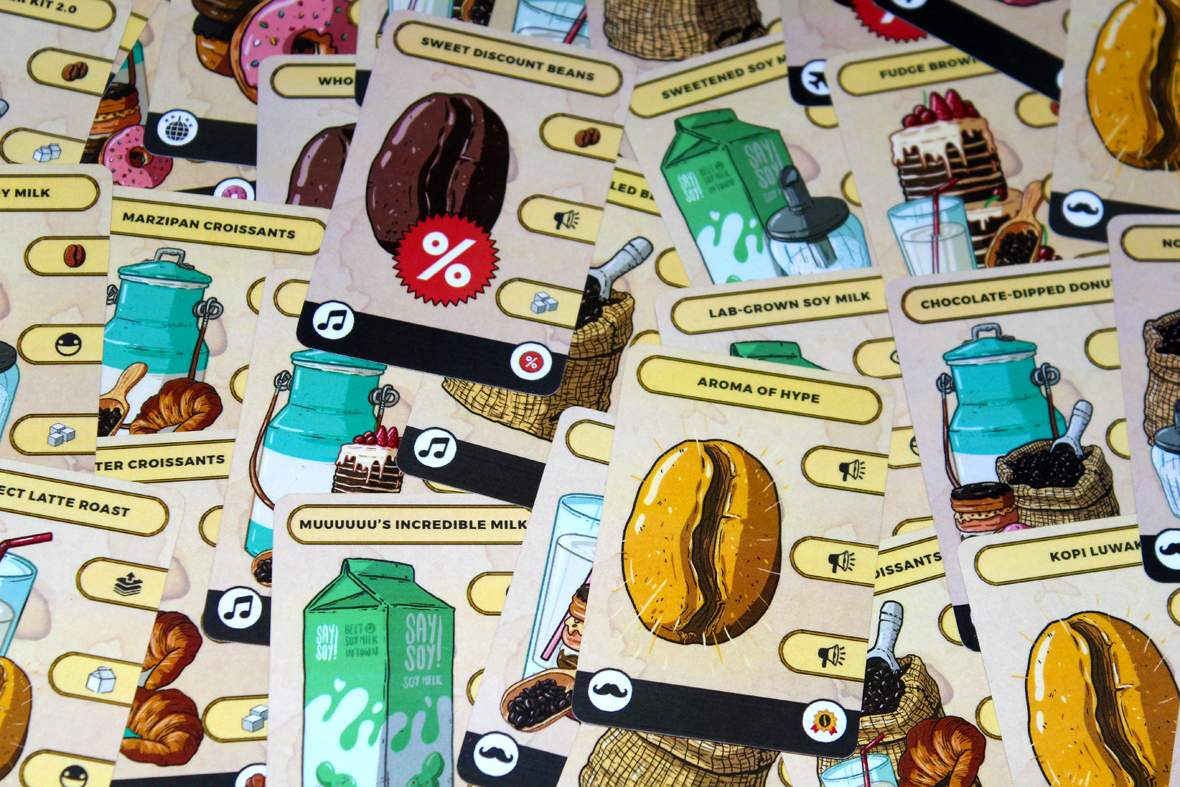 Place those in the center, as well.

Last and certainly not least, add the Decor to the center:

The art will be finalized by the time you get your copy.

As with the Customers and Products, place the deck on the left and deal five cards face-up to the right. That should make the city! 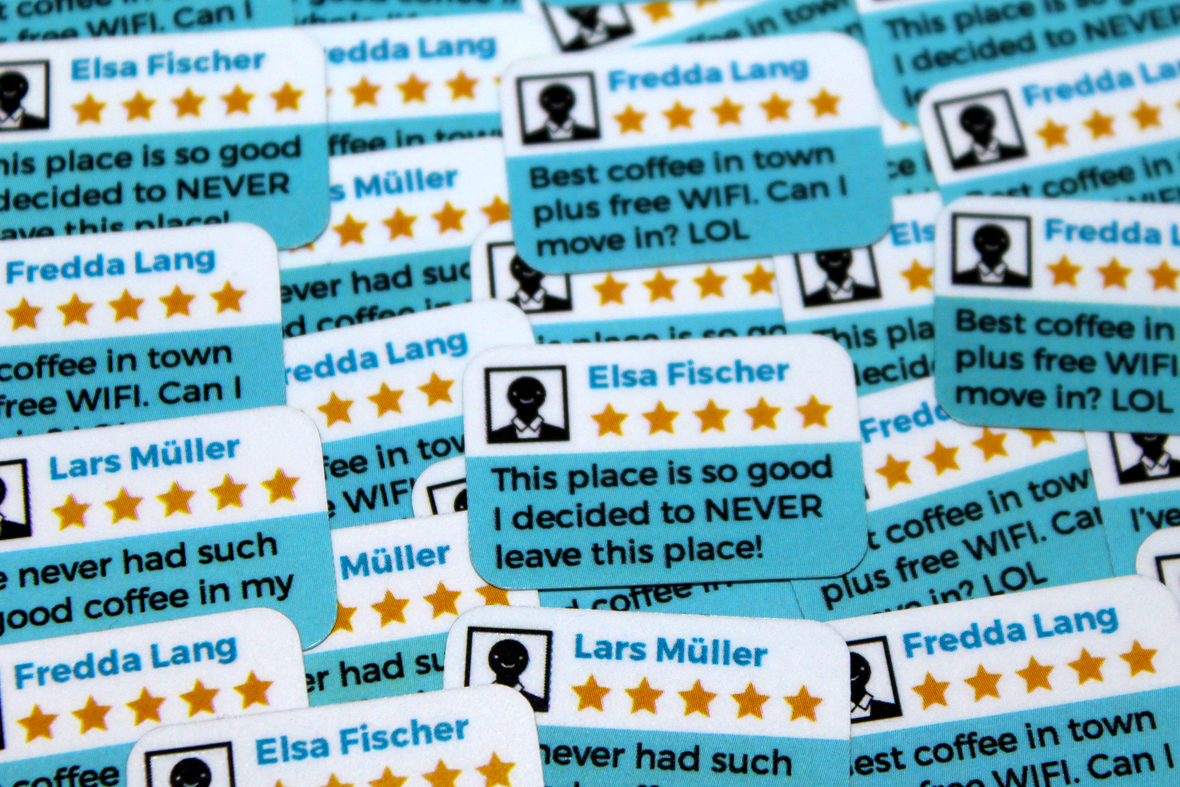 Place them somewhere accessible to all players and place the remainder aside to use if you run out. Also add all the bad reviews:

There should be Bonuses for each customer group (including Friends and Family, which I’ll get to in a second): 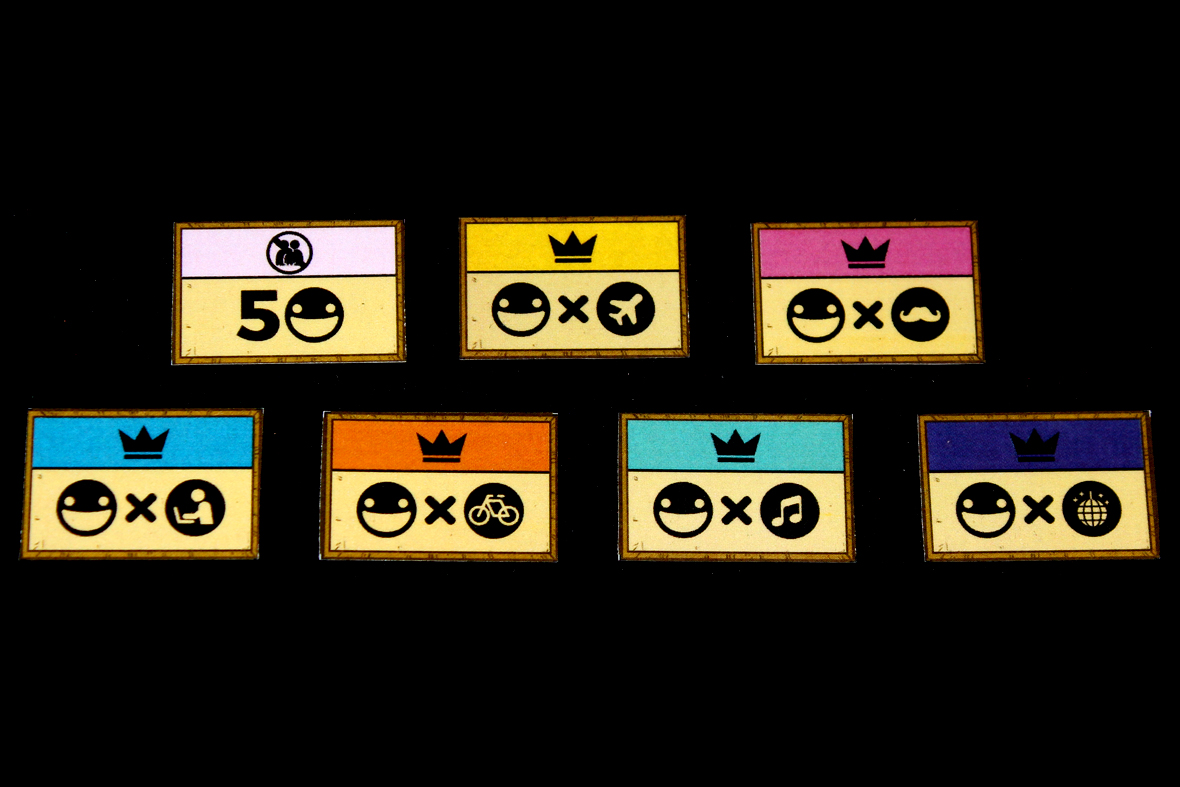 Give them 5 Hype Tokens, along with a Maximum Hype token: 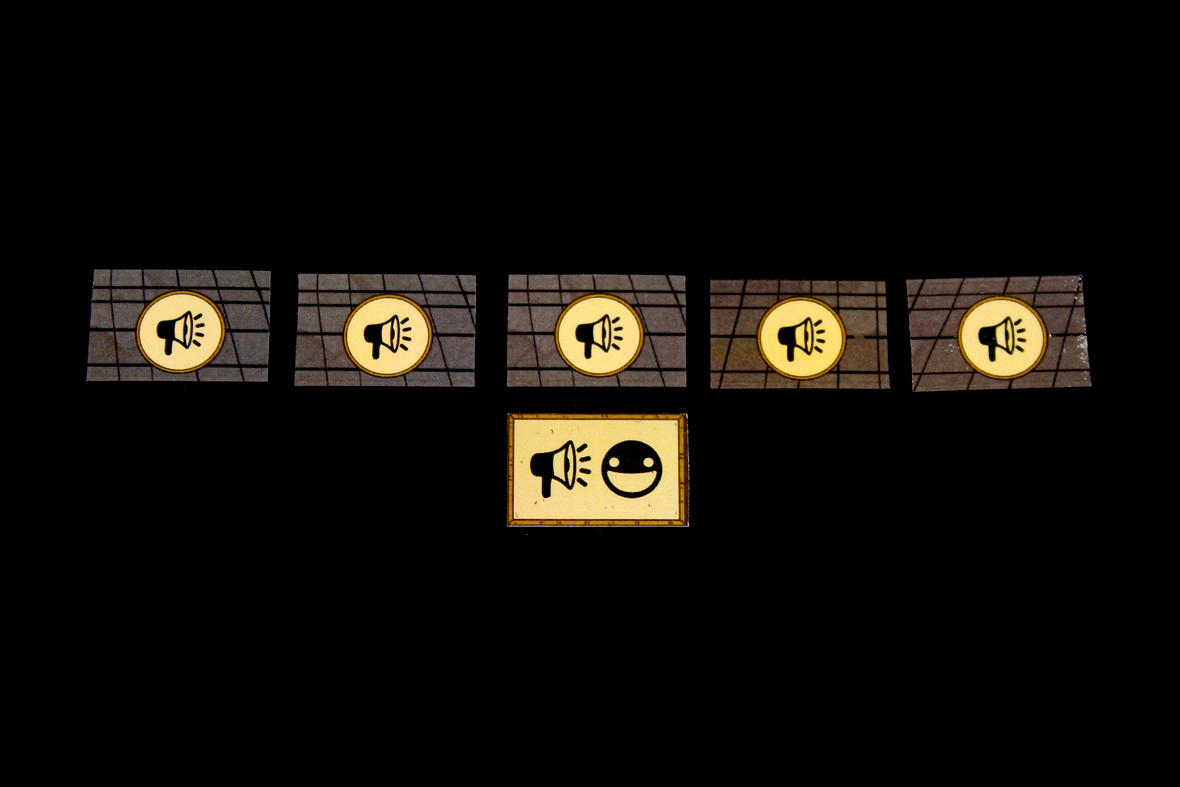 Every player starts at 2 Hype, so cover up three of those spaces. The Maximum Hype token goes on the rightmost side of the player board; that can only be unlocked by attaining 5 Hype. Since it’s not unlocked, flip it over. More on that later.

There are also Player Board Bonuses! You can unlock them by doing various tasks. Again, more on that later. Place them on the board, 5 Good Reviews-side face-down: 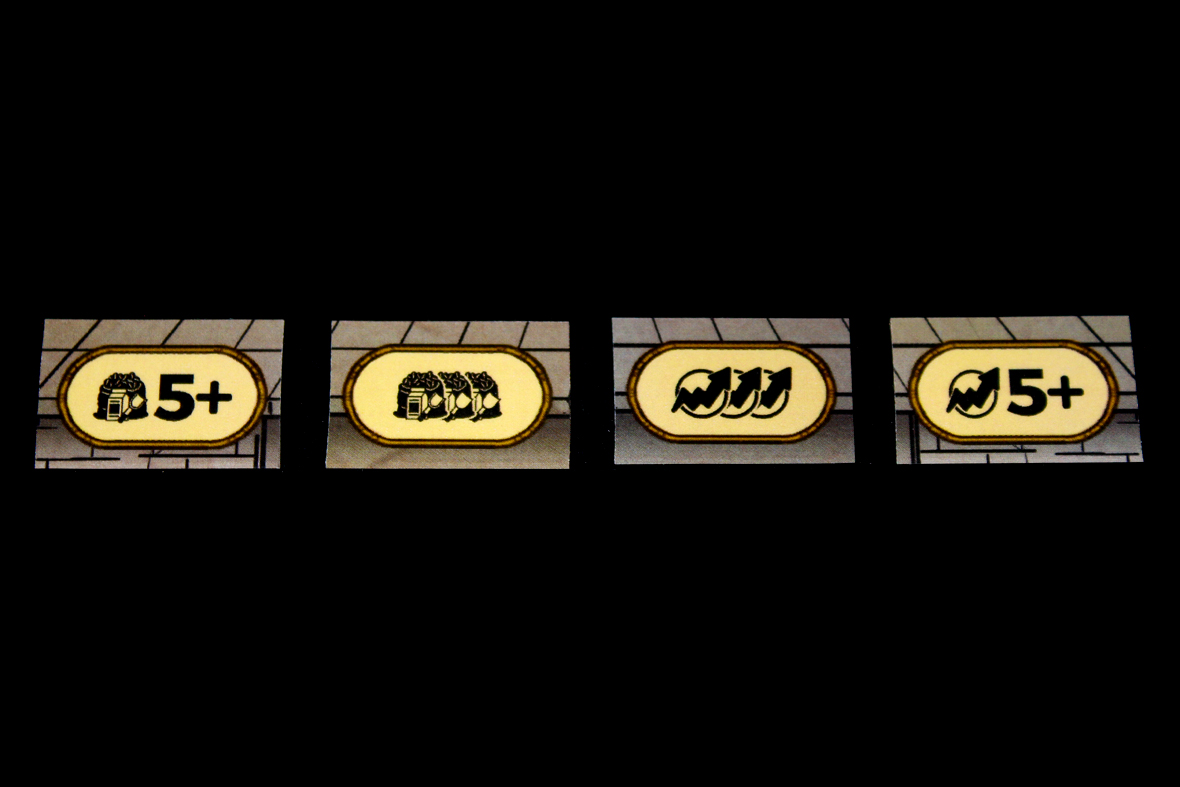 Once you’ve done that, you’re pretty much done, which is nice. Give each player a starting deck of Friends and Family:

And give them resources enough to serve those friends and family; should be six beans and a milk carton. I’ll explain how I got there later. 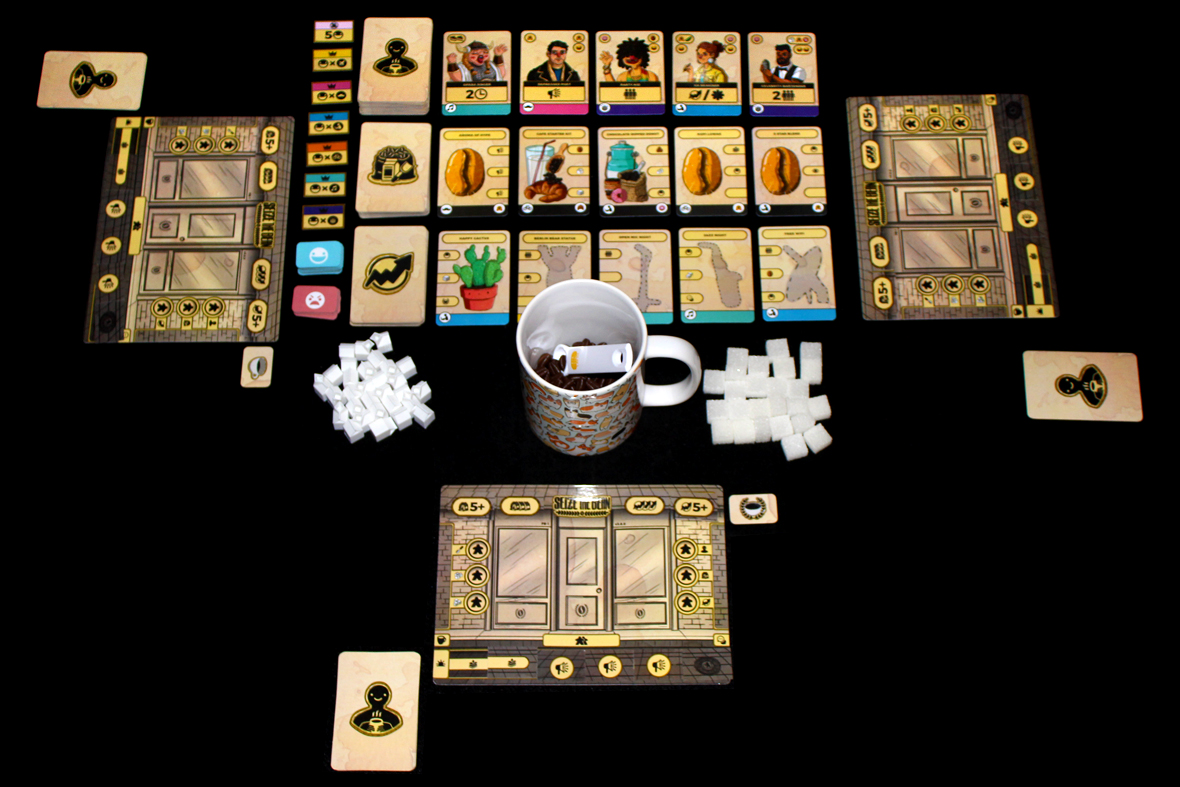 Gameplay’s actually … pretty straightforward. A game takes place over the course of a “Day”, and that has several phases. Normally, you’d expect each phase to be done sort of in turn order, however, Serve the Line is done for each player individually, and then Take Actions + Word of Mouth both go in turn order. Let’s talk more about those steps:

This happens every morning — you have to help the clientele before they get to work!

Take a look at a specific customer: 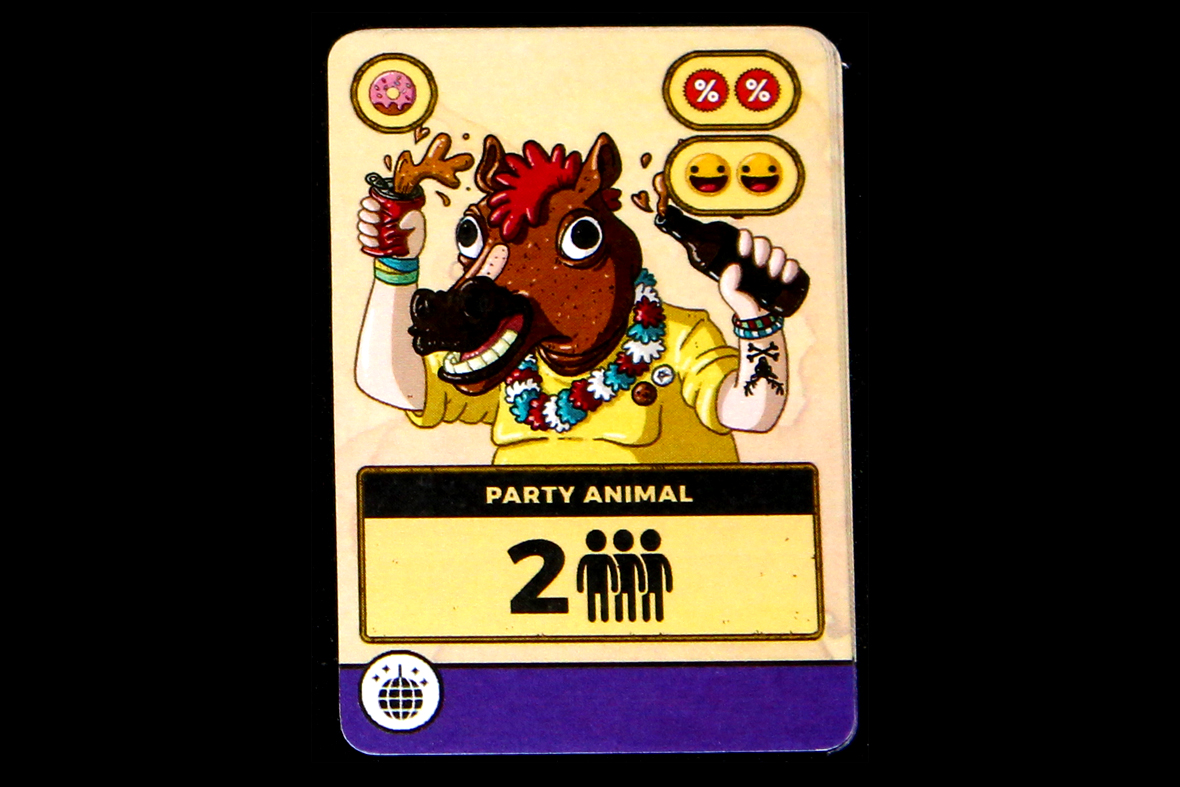 If the customer has a Patience Token on them, they are optional to serve: 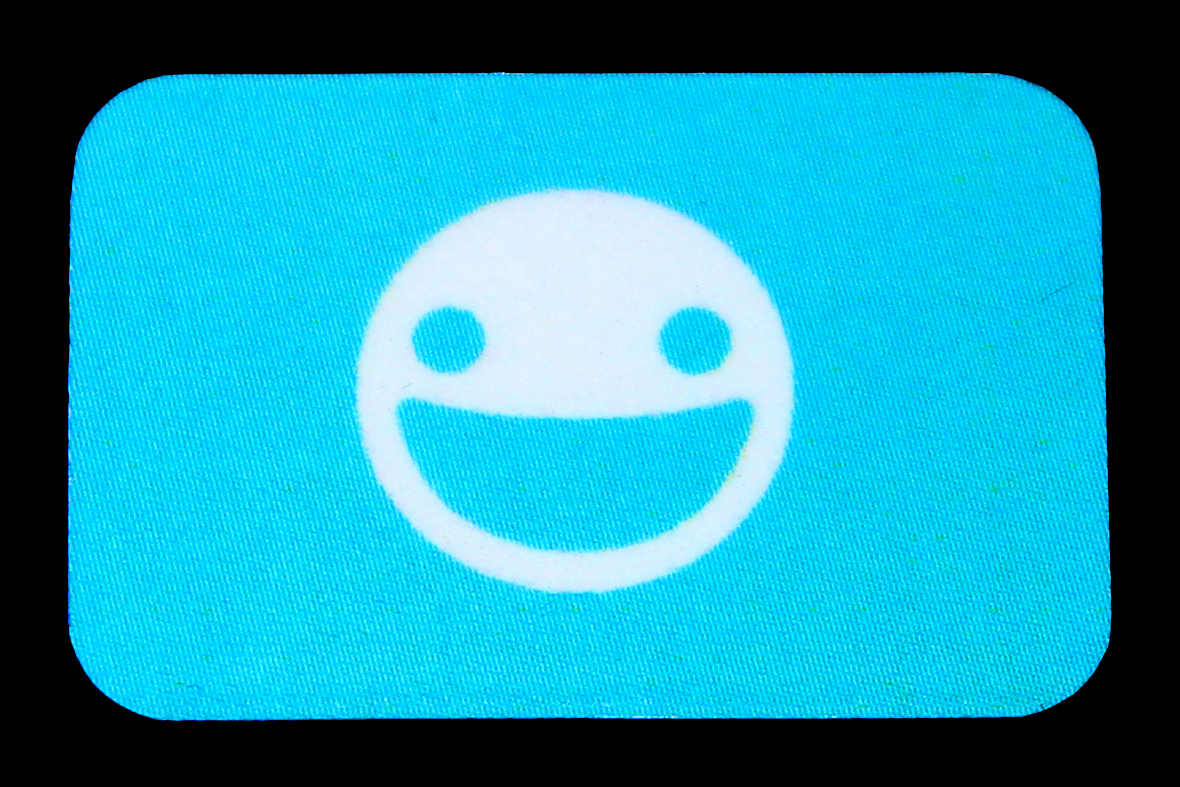 In either case, you must always serve customers left to right.

So, let’s say you’re in a bit of a bind and you can’t serve a customer. You don’t have the resources. Well, this frustrates them and they become angry. You should put one of these tokens on them: 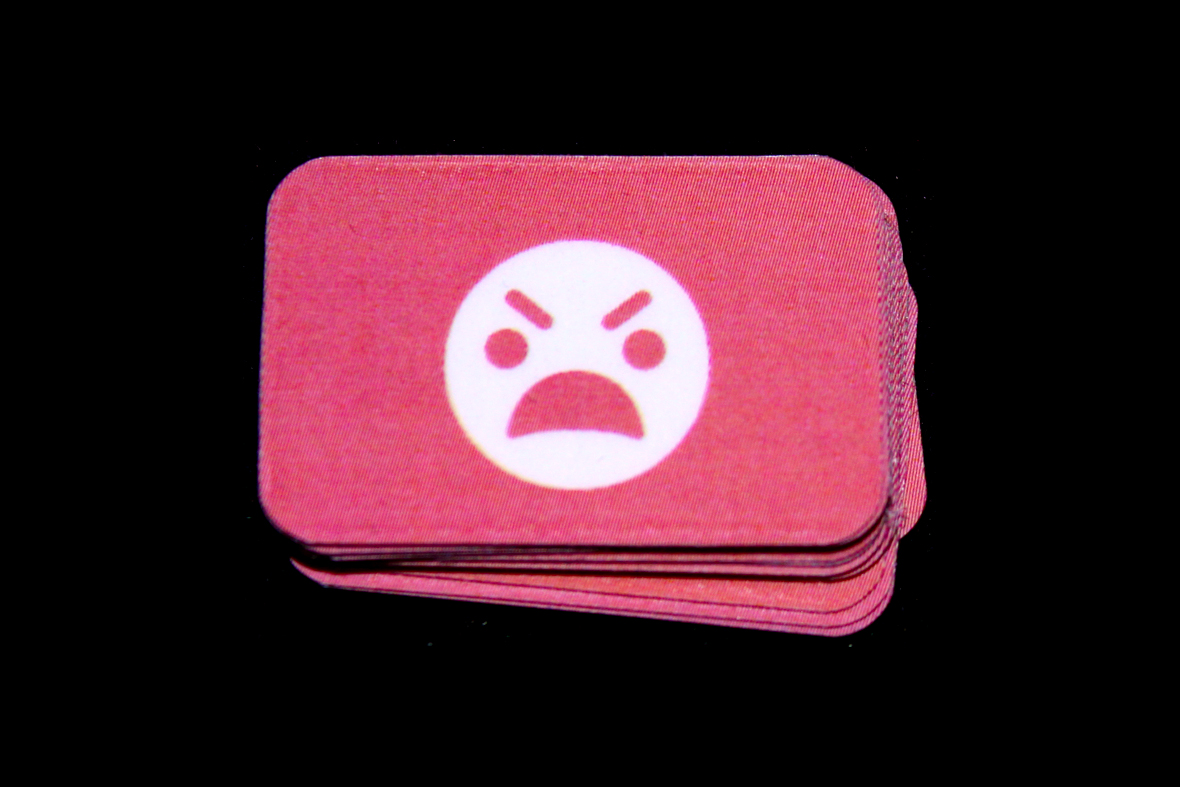 Note that this can be cancelled by a Patience Token, naturally, and Patience Tokens prevent Anger Tokens being placed on Customers. Just … like real life.

If your opponents are feeling generous, they can help you avoid that fate. If one of them has extra resources, well, they can serve your Customer for you. You still keep the Customer, but they get the benefits!

Either way, serve all the customers you can in your line. Once you’ve done so, check them! For each customer:

During this phase, you may take two actions of the six on your player board. I’ll describe them starting on the right side:

Remember that the products and decor add extra actions to these player board actions. Currently, I’ve been playing that you may take those actions in any order, which may be wrong and I’ll edit this if it is. Either way, they also add symbols to your player board (not just for the line). What do those other symbols mean? Let’s find out.

Word of Mouth is interesting. During this phase, look at your Product and Decor cards. You must add a customer from the City whose group matches the symbol on one of those cards to your discard pile. If none match, take nobody. If more than one match, then you may choose which one.

First thing’s first: when the day’s over, cycle the city. This means moving every card in the city one space to the right, except for the fifth card. That’ll be the discard pile, effectively. Add a new card from the top of each deck in the city.

Next, look at how much hype you have. For each hype you have, draw a card from your deck and add it to your “line”. There may already be characters in your line (either via Patience Tokens or from Actions), so just add them to the right of those characters. Naturally, if you run out of cards in your deck, shuffle the discard pile and use that as your new deck. 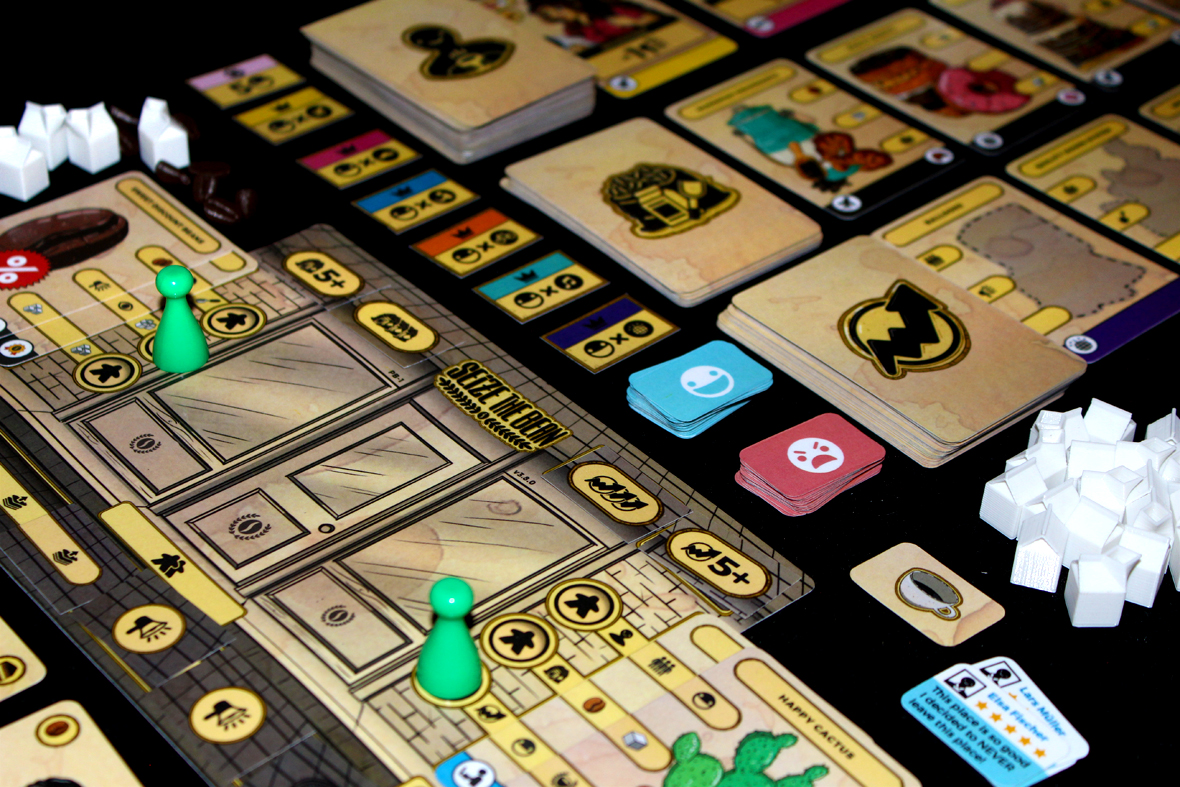 Like I said, once the final Good Review is taken from the starting stack, you do one more “Day”, only taking the Serve the Line step. Once you do that, calculate your Review Score, which is just:

Add 5 Good Reviews for each Player Board Bonus you got.

I generally like to do this stuff Mario Party-style, so I announce the Review Scores at this point before moving onto bonuses. Have every player count the numbers of each Customer Group in their deck, adding in the number of Customer Group icons on their most recently added product (their top one) and all of their decor. The player with the most of that Customer Group in their deck gets a bonus chit, which is worth 1 Good Review for each symbol of that group in your deck, on that product, and on all of your decor.

If there is a tie for any of these bonuses, award 0 Good Reviews to all tied players. Ties are mean!

I suppose the biggest difference with each player count is that there’s a bit more contention for Customers if you have the same strategy, so it’s a bit more likely that there would be players with similar strategies as you get more players in the game. This is not the biggest concern, though. You’ll also add another Customer Group at 3 Players, so, it should mostly balance itself out. To that end, I have a slight preference for 2 and 3 players, since, like Dominion, it just kinda takes longer at 4 people (because more people who aren’t you have to take their turns). 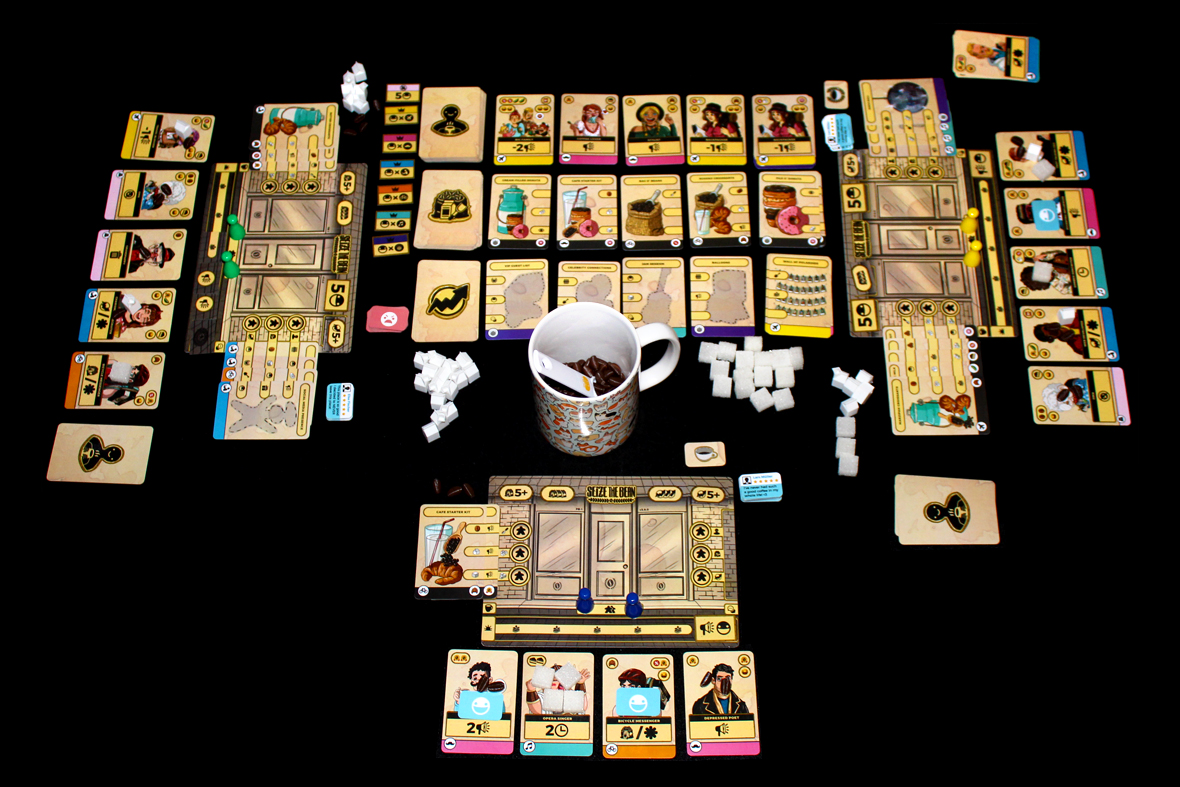 Honestly, Seize the Bean is pretty solid! It’s got some quirks (the Action flow working differently between serving the line and taking Actions is … odd) and some things I don’t like (tiny pieces are the bane of my existence), but it’s very similar to a heavier Dale of Merchants, which is a particularly great thing, especially when it’s also got a pretty diverse set of characters. Basically, it’s committed fully to its theme, and even though it’s got some odd quirks, I think the theme more than compensates for it and comes out as a really solid game. It’s been a pleasure to preview and is a game I’ve really enjoyed playing, and I look forward to having the opportunity to play it more in the future, since it’s a shoo-in to fund! If you haven’t checked it out by now and are looking for a fairly weighty deckbuilder, I’d highly recommend it!