Alright, I’ll admit it; I’m a sucker for good art. Even moreso when the game is relatively inexpensive, which led me to buy The Shipwreck Arcana practically sight unseen off of Kickstarter. This isn’t how I normally do things, but, hey, always a good time to get another game in for a review. Let’s take a look.

In The Shipwreck Arcana, you play cooperatively as fortune tellers set adrift in a drowned world. While you may not be able to see your own future, you can try to divine someone else’s, and by doing so you insulate each other and keep your collective safe as you move forward. Will you succeed in avoiding your dark destiny? Or does your fate lie beneath the waves?

Setup is pretty simple. Have each player take a set of number line tokens:

Set them 1 – 7, facing the other players. This will make everyone’s life easier. Next, take the Fates:

And add them to the bag:

That’s most of the hard part of setup. Now, in the center of the play area, you’ll need five cards:

One such card must always be The Hours, going on the left side:

Take the score tracker (green) and the doom tracker (red): 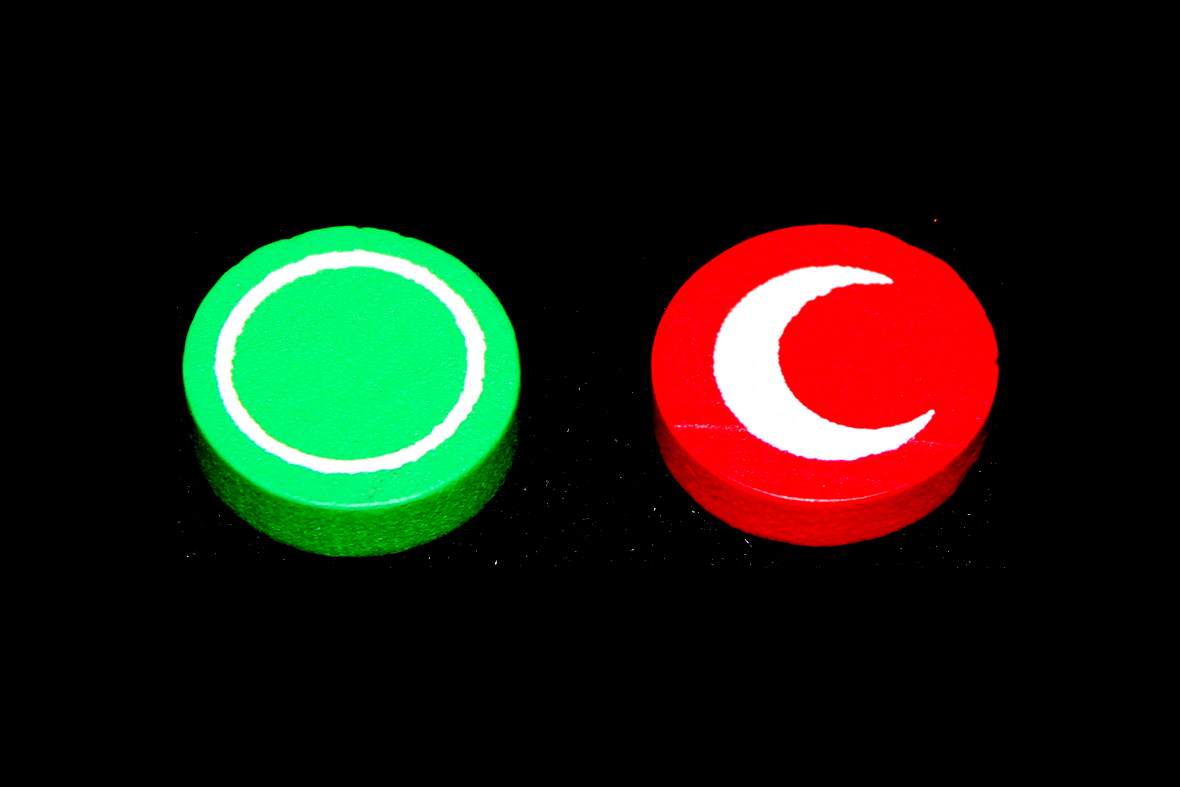 Place them on the “0” on The Hours, unless you want to play at a higher difficulty:

Once you’ve done all that, place the deck face-up above the cards and you’re ready to start:

A game of The Shipwreck Arcana is pretty simple. This is a pure cooperative deduction game, and your team plays until either the score tracker or the doom tracker hit 7. If your score is 7, you win! If your doom is 7, you lose.

But how do you score points or gain doom?

On a player’s turn, generally, they should try to avoid talking, if possible. Once they’ve come to grips with that, they should draw tiles until they have two tiles in hand. These are their Fates for the turn. Now, they must place one of their fates below one of the five cards on the table, following the rules on the cards. You may only place below The Hours if you cannot place anywhere else. If you can place below more than one card, you may choose which card to place below.

As an example, let’s say you drew the 5 and the 7 and you had the five following cards out:

Say you place the 5 below Leviathan. That’s legal, since 5 + 7 = 12, which is more than 11. That’s a legal play. If you accidentally play illegally, leave the fate there and skip the guessing phase of the turn.

Now, players have a choice — do they attempt to guess the remaining Fate in the player’s hand? You may want to start by asking the active player to flip over numbers in their number line if you know those numbers can’t be the number in their hand, like so: 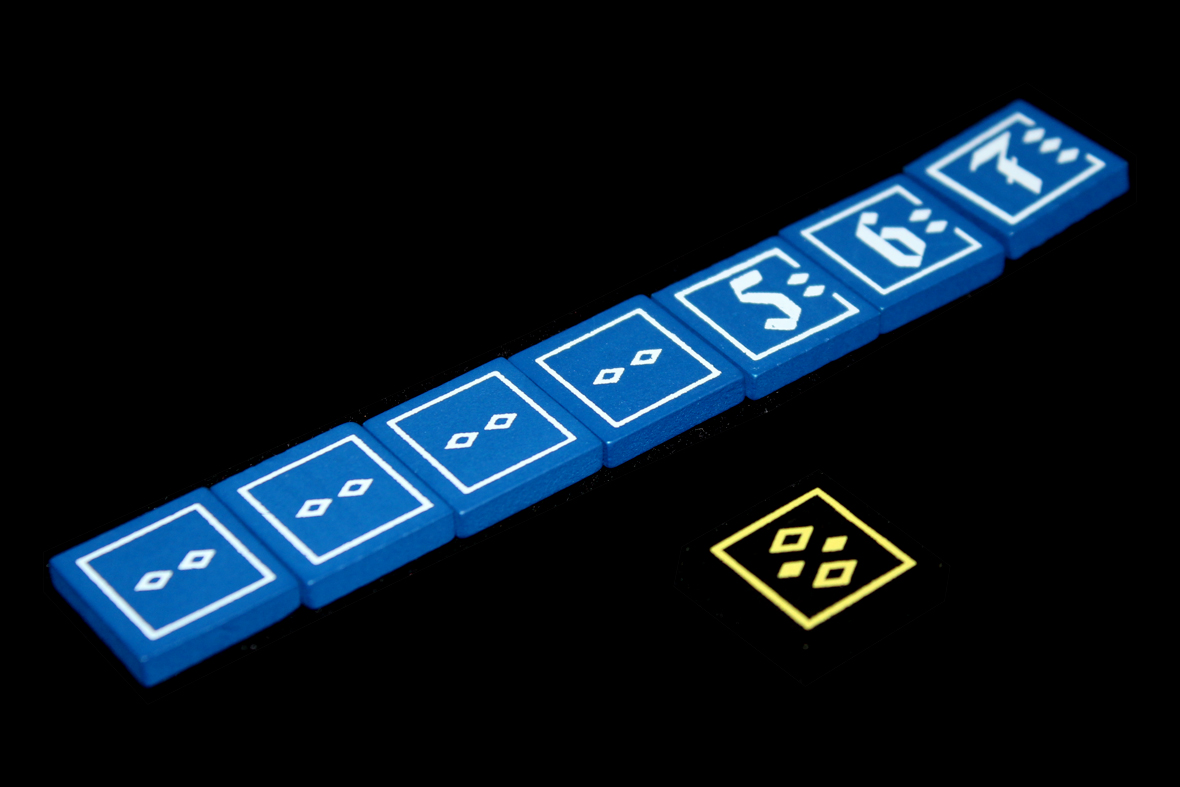 If players choose to guess, the active player only indicates “correct” or “incorrect”. You may not tell them what tile it was unless you are correct.

That’s all well and good, but the game might be too easy if this alone were the case. So, after the guessing phase comes the fading phase.

When a card fades, if you did not make a correct guess this turn, you gain two doom. This means if you guessed incorrectly or chose to not guess, you get severely penalized. That’s not great. That said, faded cards are good!

On your turn, you may use up to one Faded card for an extra ability! If you use it, it goes back into the draw deck (face-up, like the other cards). They can be pretty helpful.

Anyways, play until you win or you lose! You win at 7 points and you lose at 7 doom. One last thing. If you keep a tile in your hand between turns, you’ll only draw one tile instead of two, yes, but you are not allowed to indicate if you’re playing the old tile or the new tile on your next turn.

If you find that the game is getting too easy for you, feel free to try out the promo cards that come with the Kickstarter:

Those will be plenty difficult.

I don’t notice many differences at higher player counts other than it adds additional room for misinterpretation, I suppose, as you’re adding in more people who might be on different wavelengths than you. That said, it’s super short and super light, so I wouldn’t say that that is a huge deal or a negative.

Higher player counts do allow for one thing, which is kind of interesting. You cannot talk about what’s in your hand, even if it’s not your turn. So what do you do if you have a 4 in your hand, there’s two 4s below cards on the table, and your group is trying to decide if a different player has a 3 or a 4? Obviously you know it can’t be the 4, since you have it, but you also can’t say that to your group. To remedy this, you are allowed to discard your 4 face-up so that the group may see it, then return it to the bag. Sure, it means you have to get two new tiles next round, but you might be able to get a point on this play, which is always good.

I’d happily play this at any player count.

Overall, The Shipwreck Arcana rocks. It checks all my boxes for a great new little game, in that it’s light, fast, and fun, and it’s got incredibly good art, to boot, which really works for me. My entire style is about contrast and emphasizing colors, and these look good already, my extra photo editing tweaks notwithstanding. Sure, it’s light, but I don’t think that’s necessarily bad. In my mind, it’s a great game to play with a few people while game night is warming up, especially because you can add players in or have other players drop out and play other games while the game’s in progress! That’s a particular highlight for me, and I appreciate that it’s been incorporated into the game. All in all, it’s a great little game, and I’d highly recommend checking it out, especially if you like deduction or logic puzzles as much as I do!