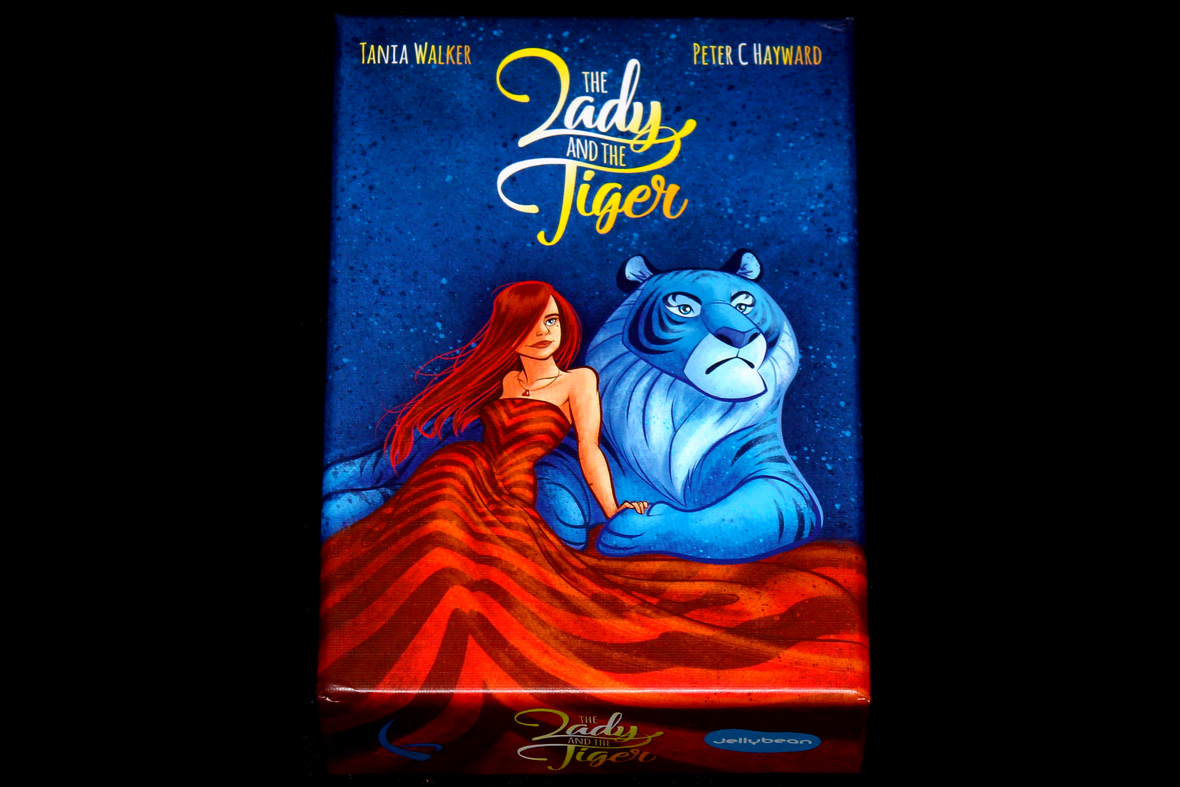 Full disclosure: A review copy of The Lady and the Tiger was provided by Jellybean Games.

A tiger, escaped from the zoo,
proposed to the Duchess of Kew.
To her great surprise
she got lost in his eyes
and found herself saying “I do”.
(Peter C. Hayward)

So, uh, you may have guessed, but it’s The Lady and the Tiger Week here on What’s Eric Playing?, an experiment that has never been done before on this site and will likely never be done again due to to the overwhelming time commitment required to manage this. That said, let’s have fun in the moment, shall we?

In Favor, you are challenged with trying to impress a Duchess with your superior auction-winning skills by collecting sets of cards that match the identity you have concealed. I suppose someone’s gotta be into that, so, good for you, friend. Will your bid for their attention be successful? Or will you fall out of favor?

The setup for Favor is pretty straightforward, as is the case with the entire Lady and the Tiger set. For this game, you’ll shuffle the Door cards:

The color doesn’t particularly matter; the rest are unused for this game. Finally, shuffle the Clue cards:

Place the deck face-down in the center of the play area and flip one card face-up. You should be ready to start!

Favor is a pretty light bidding game played over a few rounds, where you try to obtain lots of cards that match either one or both traits of your identity (the Door card you have face-down). Each round (“Day” in the game’s parlance) starts with the initial setup and ends when the Final Auction occurs (which is when the deck is depleted). Between those points, players may take their turn. Each player takes their turn starting with the first player, and they have two options:

After each auction, begin a new lot by flipping cards from the top of the deck corresponding to which round you’re in:

Once the last card is drawn, the Final Auction begins on the next player’s turn. Unlike a normal auction, nobody gets the Final Auction’s gems from the high bid; they’re just discarded out until the next round.

After the Final Auction has concluded, you score! Cards are worth points for how well they match (or don’t match) your hidden identity (the Door card you were given earlier):

After that, check to see which player has the most gems. That player gains an additional 3 points. 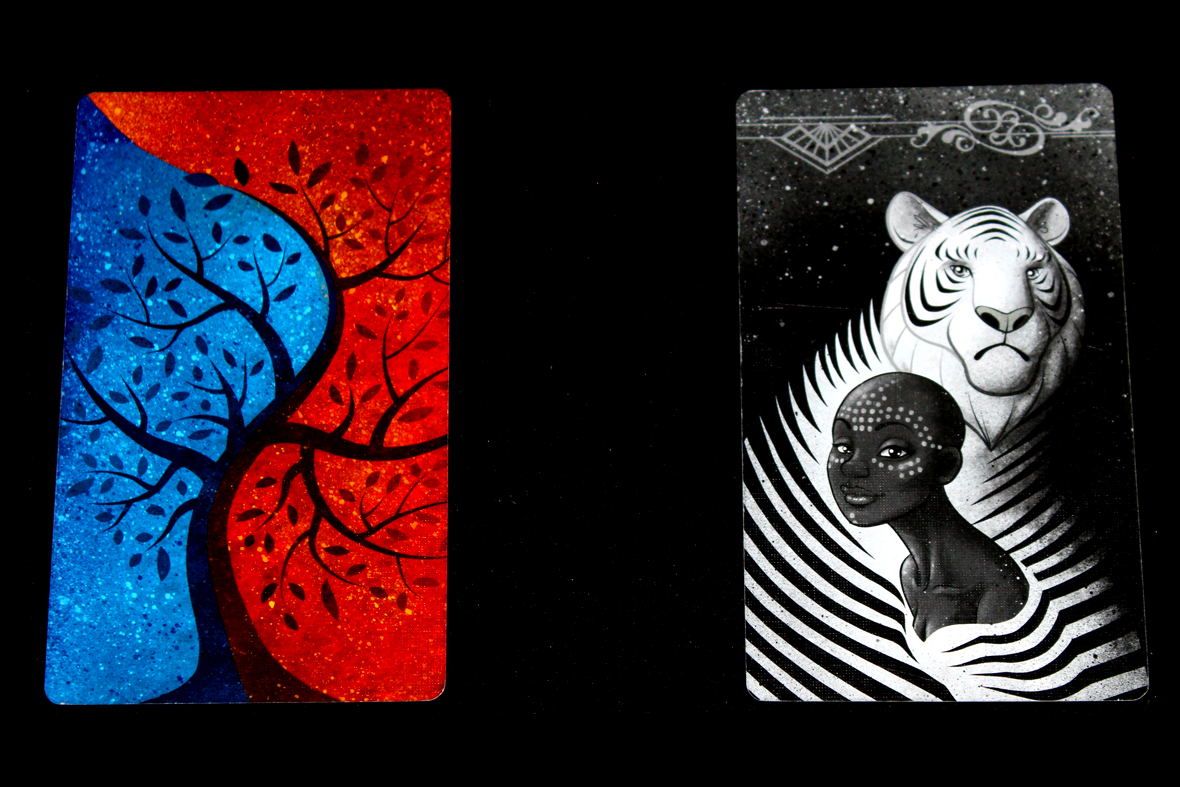 At the conclusion of the round, keep track of all players’ scores using a pad of paper or your phone or something, and then start the next day by flipping over the correct number of cards for the round you’re in:

The player who won the previous round’s Final Auction starts the next round. If you’ve completed Round 3, the player with the most points wins!

The major difference at two players is that the player you outbid will always get your gems, making it a bit more luck-of-the-draw. It’s slightly interesting if you have exact opposite identities, since you will specifically want or be able to use the other player’s card. At higher player counts you’ll also see more gems get pulled out of circulation by incomplete splits. I slightly prefer this game at those higher player counts, but it’s an interesting game for two if you like very light bidding games. Plus, this is one of the few games in the set that isn’t limited to only one player count! 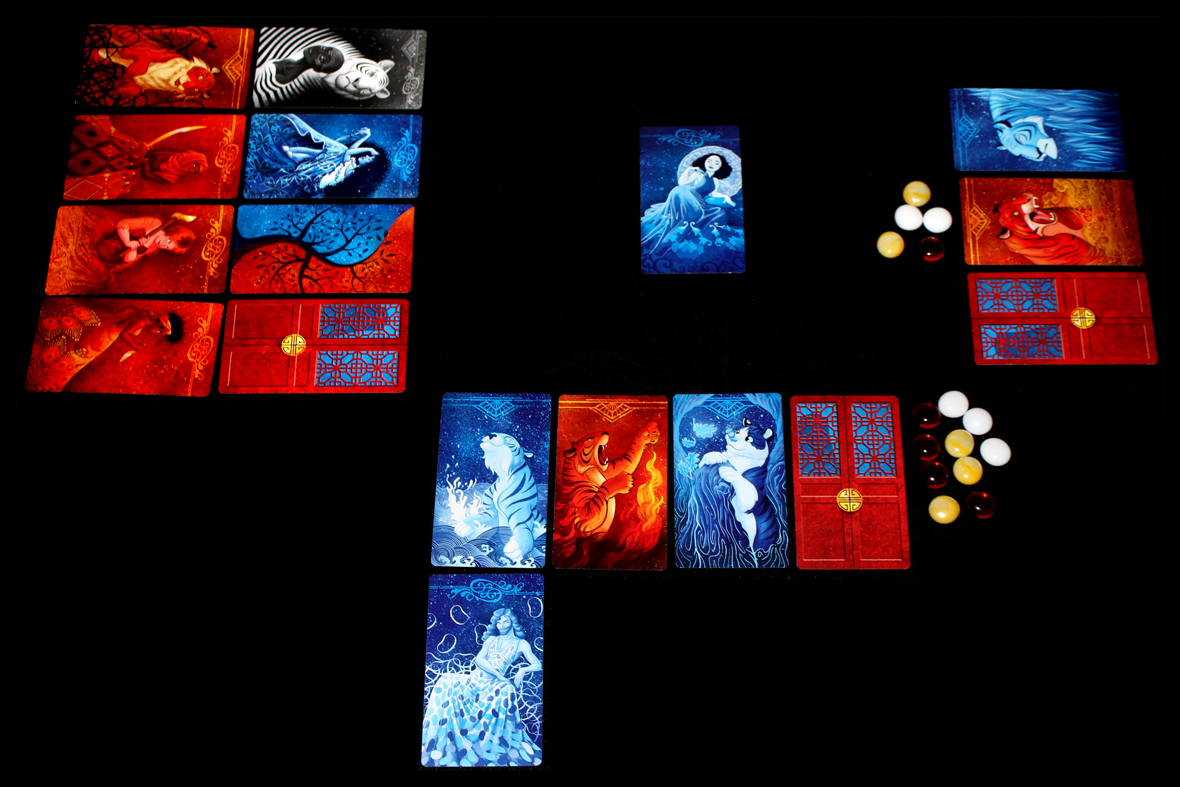 Yeah, overall, Favor is nice! It’s definitely a very quick auction game (not nearly as deep, complex, or … long as Modern Art, for instance), so you’ve gotta stay on your feet so no auctions get away from you. They shouldn’t, since you have to bid or pass, but you’ve gotta be mindful of how much money you’ve got left so you don’t get left out in the cold. Sure, the winner may get away from you sometimes, but there’s no reason why you can’t just play another round (or you can steal Oink Games‘ general three-round scoring rules and give the top scorer +2, the second-highest scorer +1, and the lowest scorer -1 rather than carrying the scores from round to round). Regardless, it’s another fun game in The Lady and the Tiger, and if you think you might be feeling an auction game but you’d like something on the lighter side, Favor may be doing you a … service? I feel like there’s another word that works there.