Full disclosure: A preview copy of Yokai Septet was provided by Ninja Star Games. Some art, gameplay, or other aspects of the game may change between this preview and the fulfillment of the Kickstarter, should it fund, as this is a preview of a currently unreleased game.

Yeah, so, uh, pretty much this entire month is going to be Kickstarter games, so hope you like reviews of currently unreleased games. We had The Neverland Rescue a few weeks ago, Streets of Steel and Sprawlopolis last week, and three this week, with Yokai Septet included. How does this one measure up?

In Yokai Septet, you play as rival village elders plagued by the Yokai. They’re ravaging farms, flooding rivers, spreading disease; you know, the normal set of things that bad monsters do. You have all arrived at similar conclusions: if you can catch the Yokai, there will be fewer Yokai getting all up in your village’s business. Mathematically, there’s something to this, so you set out to do exactly that. You gotta catch ’em all, you say, but will you be able to?

There are slight differences between the three- and four-player game. I’ll note those as needed.

So the game will come with scoring tokens: 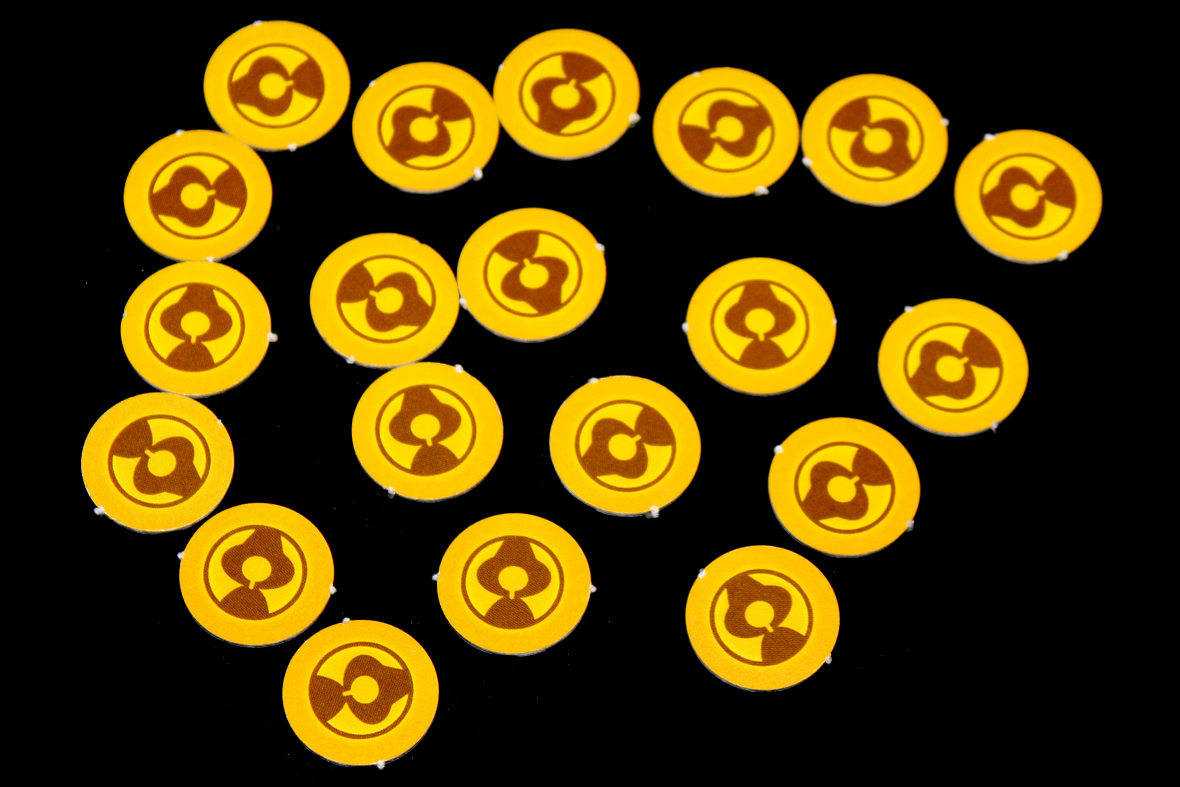 Set those aside, for now; you’ll need them later. Now, shuffle the cards:

The remaining card is the Trump Suit; I’ll speak more to that in a bit, as well. Once you’ve done that, though, you’re basically ready to start the game! 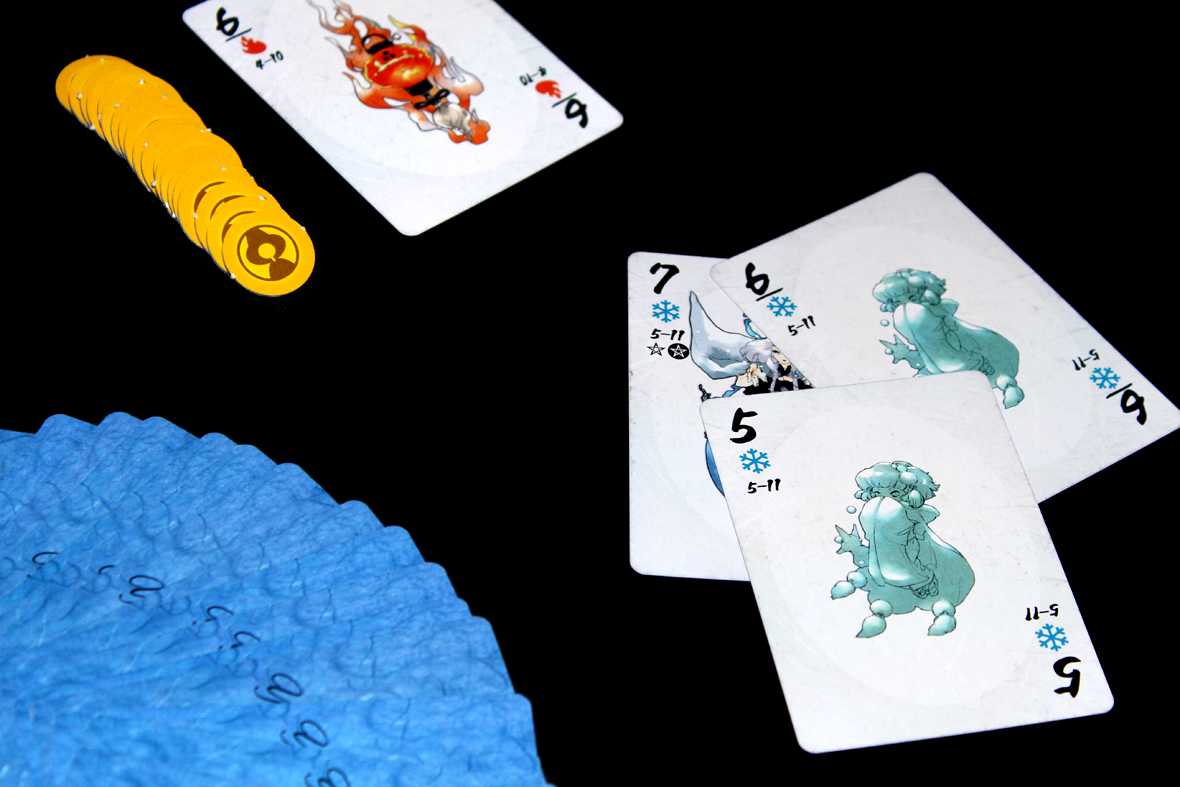 So, Yokai Septet is an example of a trick-taking game, similar to The Fox in the Forest. For those of you who don’t know what a trick-taking game is, I’ll explain, below. If you already do know, well, you can skim this section until the “Actual Gameplay” header. You’re welcome.

Generally, a trick-taking game is played over a series of rounds, called “tricks”. One player is the lead, designated by the “Lead Player” card in Yokai Septet:

On their turn, they can play any card from their hand. The suit of this card (the color, not the value) is what’s known as the led suit. On your turn, if you have a card of that suit, you must play it. If you have more than one, you may choose which of those cards you would like to play. If you do not have a card of the led suit, you may play any other card in your hand that you’d like. Generally speaking (and this is true in Yokai Septet), the highest card of the led suit will win the trick, and the player who won the trick takes the cards.

In many trick-taking games (again, no exception here) there is also what’s known as a Trump Suit; a suit that, when played, beats any other suit. In this case, it’s any card with the same suit as the leftover card from when you dealt out cards. Normally, when you play a card that isn’t the led suit, you cannot win; however, if the card you play is the Trump Suit, you will win unless another player plays a Trump Suit card of a higher value.

That’s basic trick-taking. So, let’s talk about the rest in Actual Gameplay.

This card, when played, beats everything. No card is better than it, no matter what. That’s pretty good! Additionally, the Yokai Septet cards are staggered. Normal decks of playing cards tend to have four suits of all the same value cards, whereas Yokai Septet has seven suits, each with a different spread of card values:

Each suit has a card with a value of 7. This card is known as the Boss Yokai:

You’ll want to collect these, as they’re worth points if you win the round. Now, knowing all that, we can talk about how the game is played.

So, the game is played either individually (three players) or on teams of two (four players). If you’re playing on teams, you should be sitting across from your teammate (so that the players to your left and right are the other team). Once you have your hand and you’ve had a chance to look at your cards, you’re going to pass some cards to another player:

All cards should be passed simultaneously, meaning that no player should be able to see the cards that they were passed before passing cards. After doing this, it’s time to start the round! Determine the first player as follows:

The latter case really only applies in the first round of the game. In all subsequent rounds, a player will be holding the Lead Player card.

The Lead Player will play a card, and then all other players will follow. You then resolve: 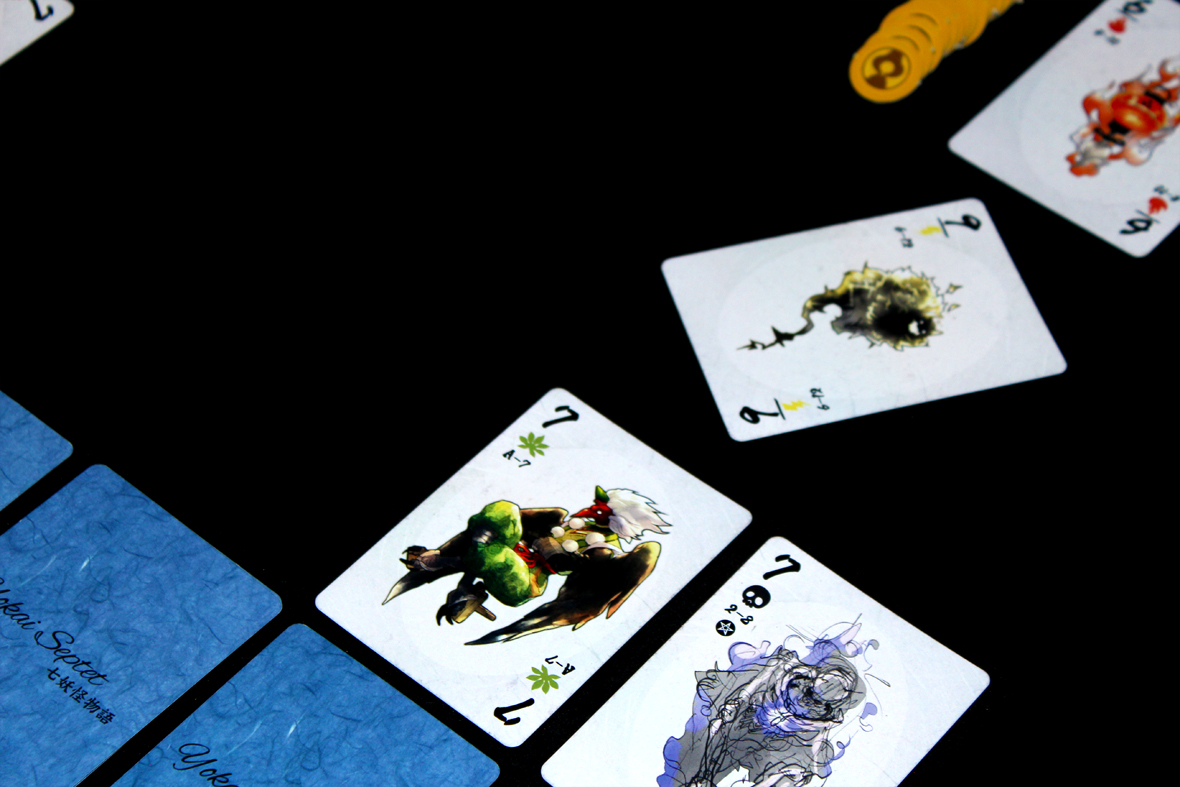 Play continues until one of these three conditions is met:

Once that happens, move on to scoring. Only the winning player / team scores. In a three-player game, it’s possible for more than one player to win.

If you’re playing with the Basic Scoring rules, ignore everything below and just give the winning player or team 1 point. They need 2 points to win.

If a player or team won by collecting enough Boss Yokai, they may earn points from the Yokai. That said, regardless of its normal point value, the Boss Yokai of the Trump Suit is always worth 0 points.

If all players ran out of cards, just have the winning player score their Boss Yokai as above.

I mean, the differences between 3 and 4 players are that it’s an entirely different game, as 4 players is a 2-on-2 team battle whereas 3 players is a free-for-all. That said, they’re both pretty great in their own respects. There will be some strategic shifts at different player counts, since you’re really passing cards to mess your opponents up in a 3-player game and you’re passing cards to bolster your teammate’s hand in a 4-player game, but there are core similarities as well. Honestly, they’re kind of difficult to compare.

The major thing to look out for between the two is that you only need three Boss Yokai to win the round in a 3-player game and you score the black stars as well as the white stars. Furthermore, when you lose a round by winning seven tricks, the other players only score three points, rather than anything to do with the Yokai. Keep those things in mind and you’ll be set.

I’d happily play this at either three or four players. 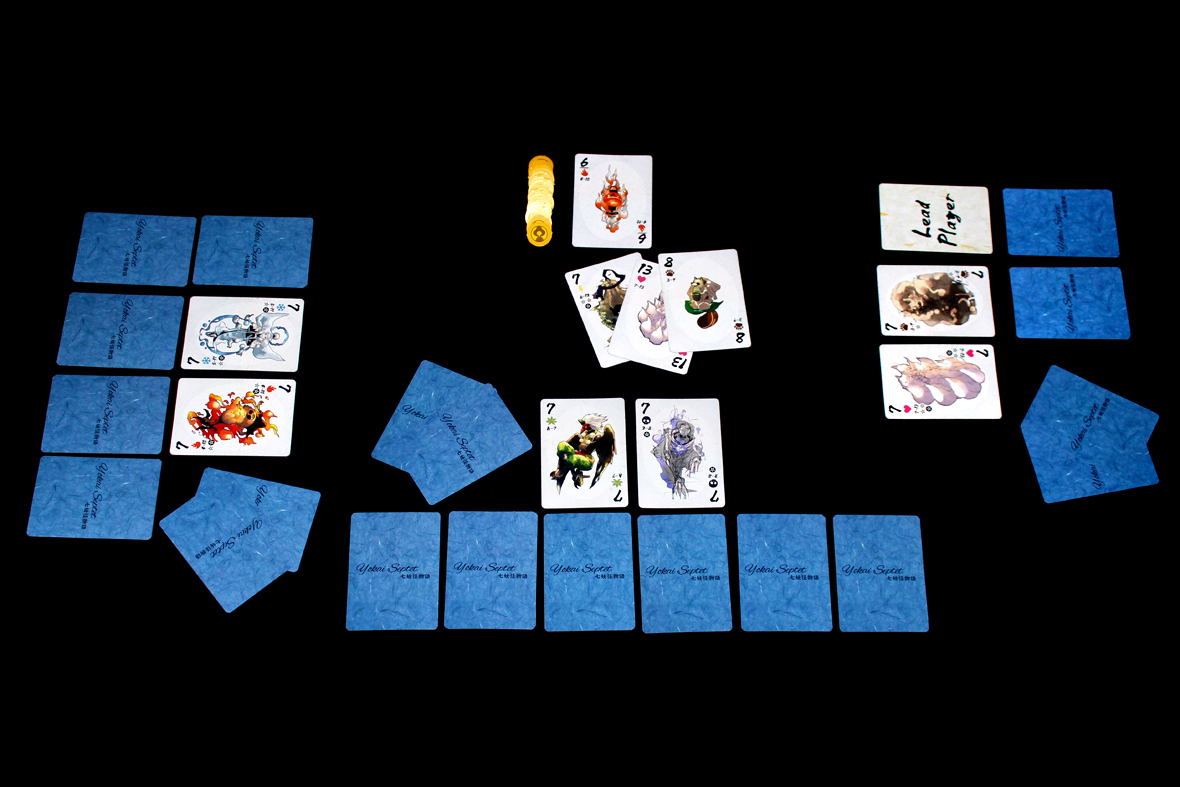 Overall, Yokai Septet is super fun! It’s really portable, which I appreciate, and even though the art isn’t totally finished, yet, the art that is done is pretty great! What I’d love to see would be like, scoring cards (sort of like in Dingo’s Dreams) rather than scoring tokens so it would be essentially one deck of cards, making it even more portable. That said, you’re probably not going to see it getting played on, say, an airplane, unless your entire row is into it. In general, I’m a big fan of quick games, sure, but the opportunity for a big reversal or a super-good round or a huge play are all here in Yokai Septet, and I love that about it. We played it once with someone who didn’t know what trick-taking games were and they ended up winning. It’s approachable, it’s fast, and it’s fun, and if you’re looking for a neat spin on trick-taking (but you have too many players for The Fox in the Forest), you should check out Yokai Septet!