Full disclosure: A preview copy of Sprawlopolis was provided by Button Shy Games. Some art, gameplay, or other aspects of the game may change between this preview and the fulfillment of the Kickstarter, should it fund, as this is a preview of a currently unreleased game.

Well, I mean, once you’ve checked out one Button Shy Game (or … four), you’ve gotta keep checking them out periodically, right? And naturally, when someone starts talking about Circle the Wagons, it piques my interest, so, here we are.

Sprawlopolis is the spiritual successor to Circle the Wagons! Instead of staking your claim and building your boomtown, you’re helping plan the ultimate city. And, since it takes a team to build a great city, you’re making it together, in a cooperative game, rather than a pure competitive one! That’s always exciting. Do you have what it takes to build a sprawling metropolis?

Just like its predecessor (and I think all Button Shy Games?), you’ll find 18 cards:

These also have scoring conditions on the back:

Shuffle them up and pull three out — those will be your Scoring Conditions for this game, and your challenge score. More on that last bit later. Place those near the center of the table, in view of all players.

Shuffle the deck and deal one player three cards and the other players one card each. If you’re playing solo, just deal yourself three cards. Once you’ve done that, put the deck city-side up, and place the top card of the deck into the center of the table. That’ll be your Build Area for the game. You’re all ready to start! 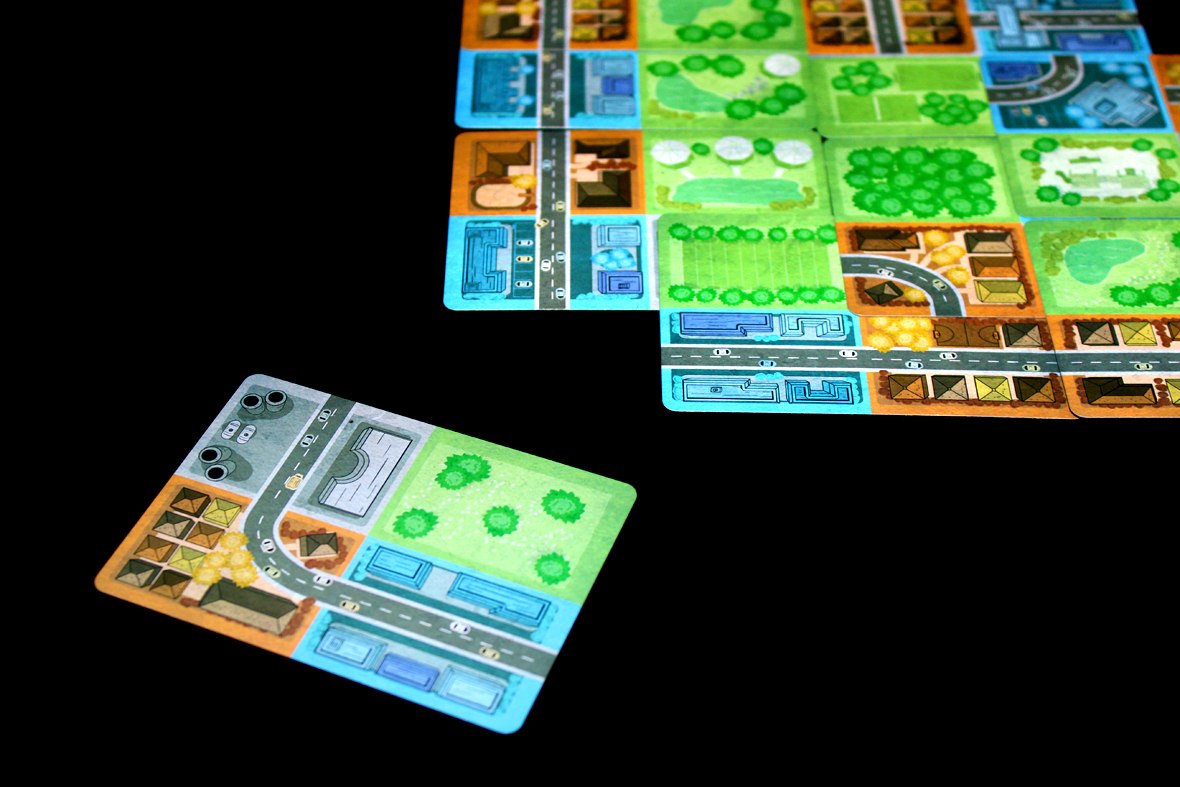 Alright, so, Sprawlopolis is a pseudo-drafting city-building game, which means that you’ll play the cards in your hand to build a city and then pass the remaining cards to your next player, who will do the same. Once everyone is out of cards, the game will end and you’ll be judged against some criteria to see how you did.

That makes your turn pretty easy! Simply add a card from your hand to the Build Area such that it’s at least adjacent to another card already in the Build Area. You may place it on top of another card completely (I guess) or partially, provided that you’re not tucking the new card below another card. New cards must always be placed on top. Uh, you can rotate the cards, but it needs to be either 0 or 180 degrees; the rectangles on the cards need to line up. You may also want to connect the roads together, as much as you can, for unrelated future-scoring reasons. Furthermore, note the four different kinds of areas on each card: 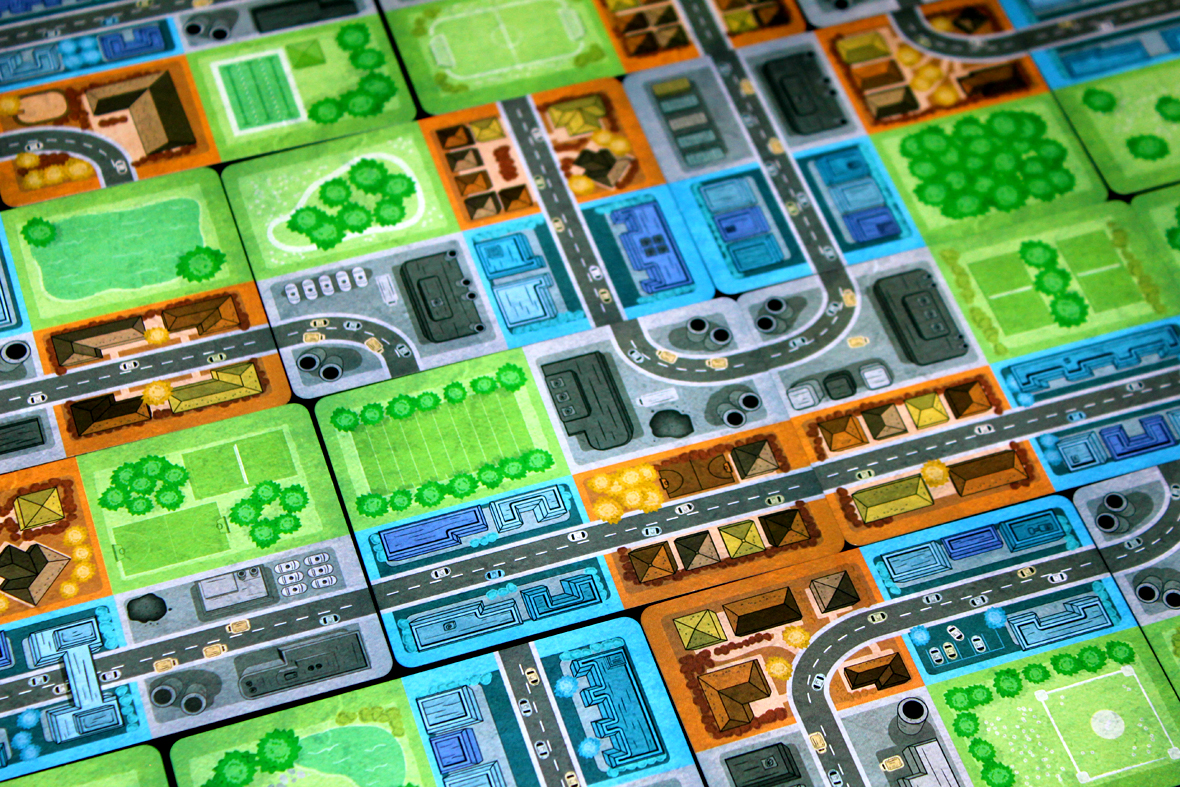 These may be relevant to you, they may not. The important thing is that you are allowed to talk about whatever you want with your co-players, but you may not show them any of the cards in your hand. If you do, well, that’s the card you’re playing, on your turn. They can still help with placement, too; it’s a very friendly game.

Once all 15 cards have been placed, the game is over! You’re going to begin scoring, now. So, first thing’s first: lose some points!

Once you’ve done that, you see the numbers on your Scoring Condition cards? Add those three numbers together. If your score is higher than that value, you win! Otherwise, well, you don’t.

Having too much / not enough difficulty?

Not really! The major difference is between solo and non-solo mode, in this game. Like most cooperative games, I find that when I’m playing solo, I tend to make … more mistakes. It’s not really anything against the game, it’s more just the inability to check my work by running it by someone else. That makes the game a bit more challenging, at solo, I’ve found. Between two and four players, well, there’s no real difference — it just ends up being an extra person whose turn it is that isn’t yours.

Overall, Sprawlopolis is a lot of fun! I’d say I enjoy it just about as much as Circle the Wagons, but for slightly different reasons. Circle the Wagons has a nice sort of competitive aspect to it, even if it can feel fairly solitaire-y, at times. Sprawlopolis fixes that a bit with the cooperative aspects, but I feel like there’s more volatility in the Scoring Conditions than in Circle the Wagons, or at least that the volatility is more of a problem because you want to score all of them so you can win, rather than being okay ceding some of them to your opponent. It’s rare to get to draw a comparison between two games so directly (I think the few game / spiritual successor pairs that I’ve played I’ve almost unilaterally preferred the successor, as in Above and Below / Near and Far and Love Letter / Lost Legacy.), but that doesn’t mean that there’s anything wrong with Sprawlopolis; far from it, in fact. They occupy slightly different spaces, sort of like a patch for my one complaint about Charterstone being that I wish it were cooperative. If you find that Circle the Wagons is a lot of fun but you prefer the cooperative games, check out Sprawlopolis! If you’re enjoying Sprawlopolis but really want to grind your opponent into the dirt, Circle the Wagons exists, as well. Plus, they both fit in one wallet, so, I mean, it’s a perfect pairing, yeah? Either way, I think it’s a solid entry and a super-fun, super-fast cooperative game, so I’d definitely recommend checking it out!