Full disclosure: A review copy of Paleolithic: Seafarers was provided by Shepherd Kit.

Like I said, I had both expansions and the art’s super good, so here we are.

One last expansion (for now) for Paleolithic! Now you’ll take to the sea to find new sources of trade and whatever else you can find on the open ocean. Thankfully, some knowledge was exchanged as well, and you’ve learned how to upgrade your tribal settlements with new technologies: offensive, cultural, and economic. Will these help you gain an edge over your opponents?

Alright, so a few new things in this one. You’ll set up the game normally, maybe do stuff with the Dawn of Humanity expansion, sure, but let’s talk about what this brings.

I neglected to mention it in my previous review, but it has its own Animal skill (which I think comes in Dawn of Humanity, sorry), as well as a new, mysterious Upgrade Card: 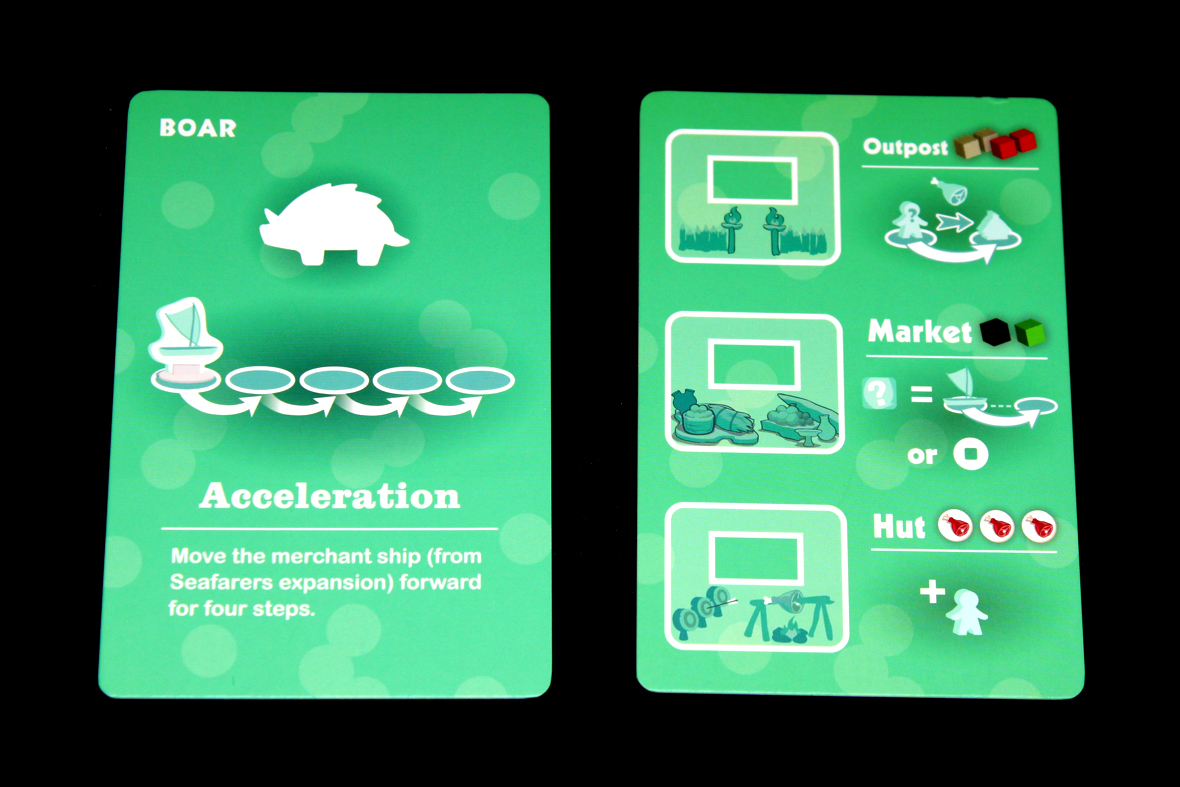 Lucky for you, every other culture gets their own Upgrade Card as well: 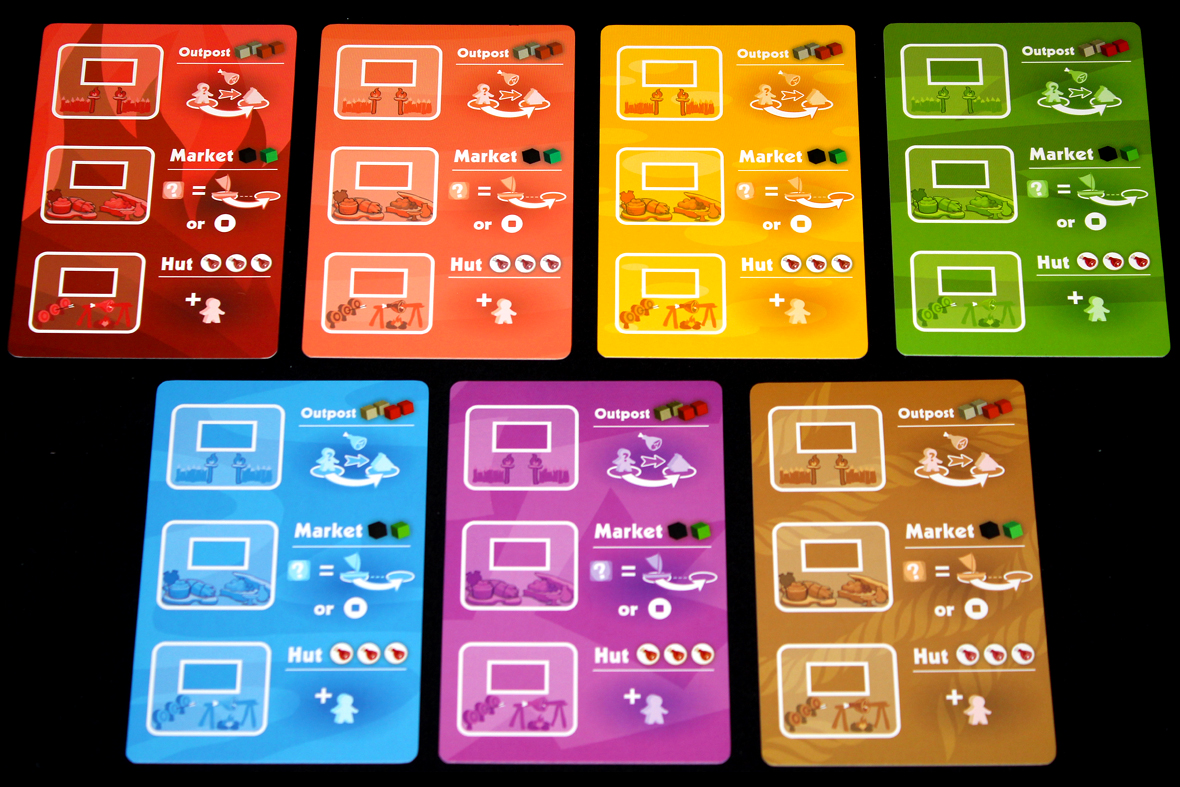 Have each player put three Upgrade tokens (one of each type) on the cards:

Set up the board as normal, but shuffle in the Shisanhang Artifact cards:

They are not very valuable.  Oh well! Once you’ve gotten the normal stuff set up, add the new Trading Board:

Add the Ship Token to the end: 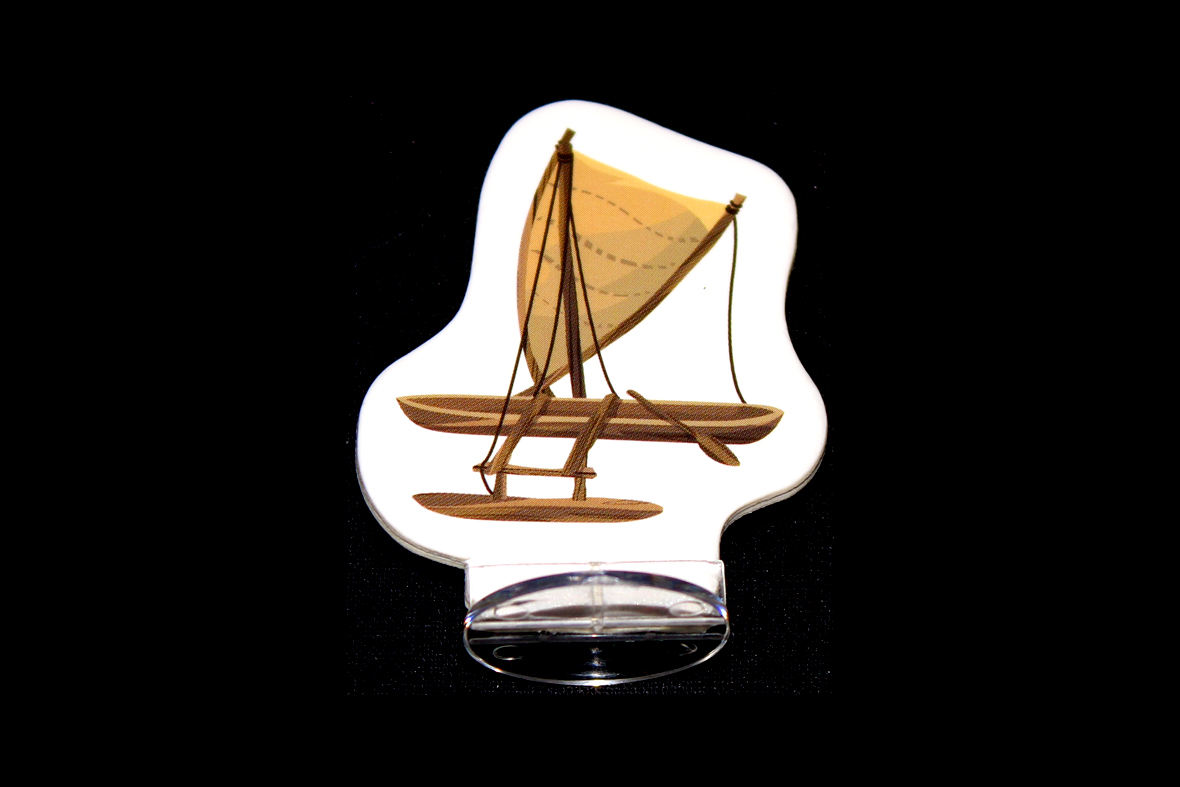 There are also Trading cards, all new, so shuffle those and keep them separate: 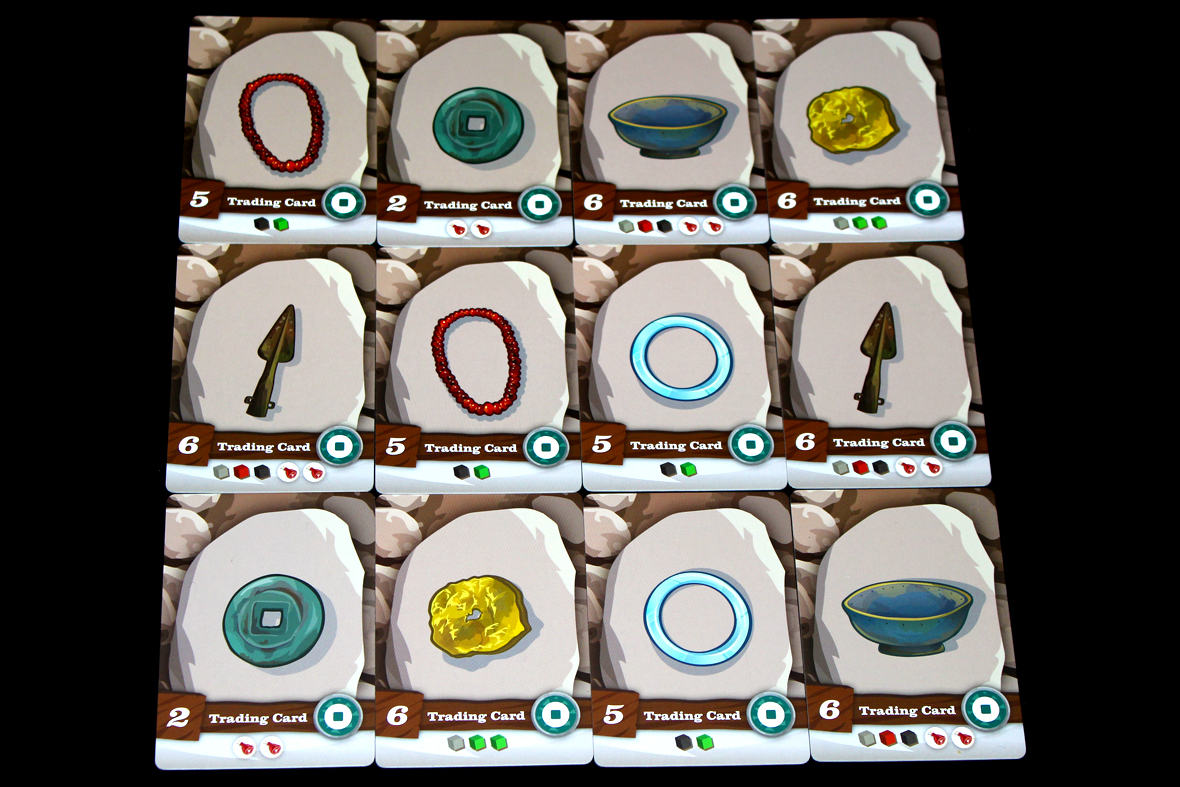 As usual, there’s another brand-new Legendary Character card, so you can use that as well, if you’d like:

Once you’ve done that, well, you’re ready to go! 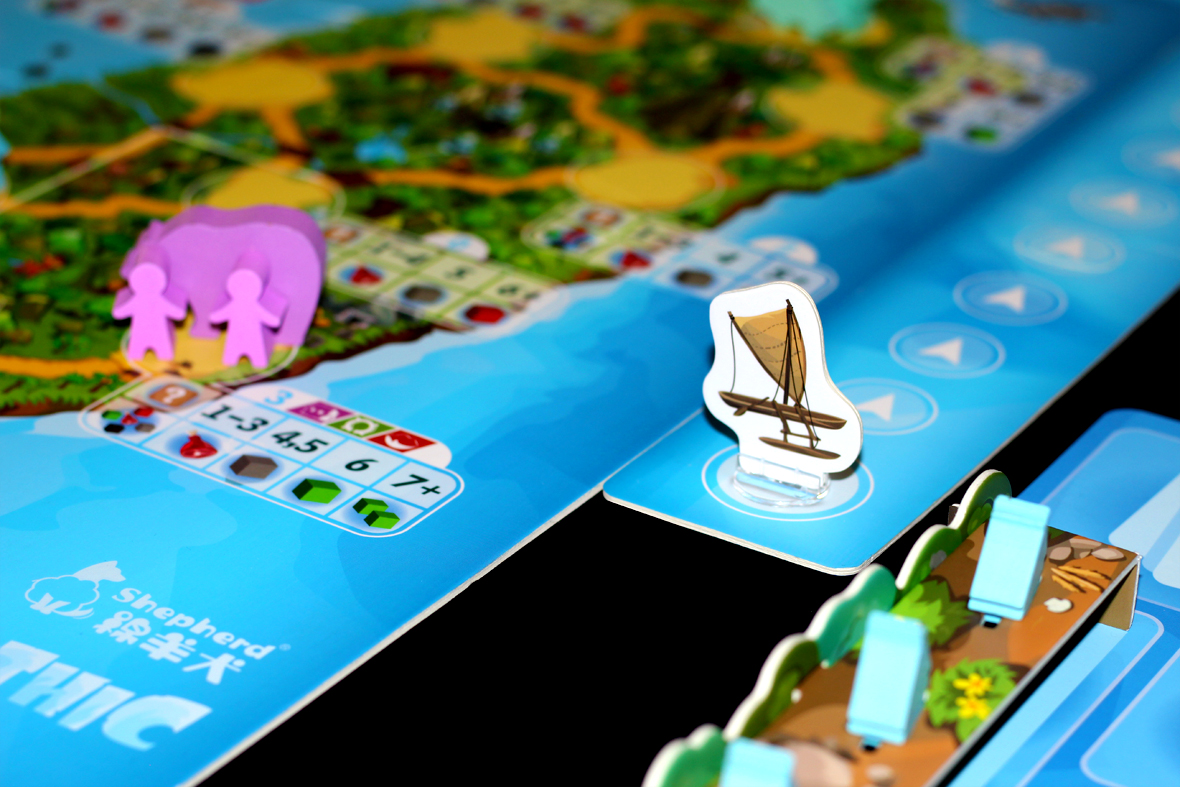 So the game plays even more similarly to the base game than the first expansion, in some ways. The real thing that this adds is the Trading cards:

These can only be activated by moving the Ship to the end space on its separate board. How do you do that, you might ask? One of two ways. The first, simplest way, is that the Shisanhang’s Animal Skill is to advance the Ship four spaces, if you’re playing with the Dawn of Humanity’s expansion (adding Animal Skills). If not, well, you need to do something else. So let’s talk about Upgrades. 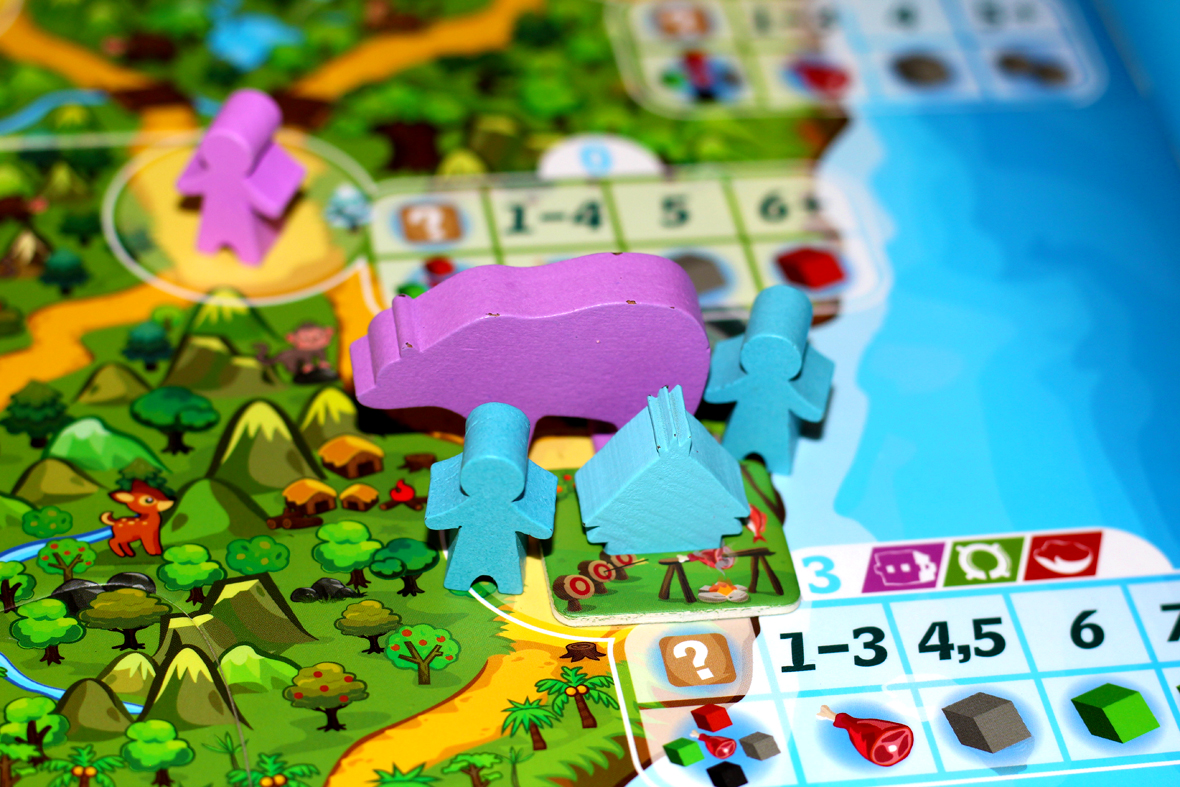 Your Upgrade Card has three Upgrade tokens on it. As part of the Enhancement Step (which you may or may not remember from my previous review of the Dawn of Humanity expansion), you may now both use an Animal skill and purchase a Tribal Upgrade. Now that’s progress. If you’re only using Seafarers, well, you don’t have Animal skills, so you only get Tribal Upgrades. You have three options, when you buy, and you may only buy one of each:

Beyond that, the game plays as normal.

Most of it’s the same as the other two (especially if you’re playing with the Dawn of Humanity expansion).

The interesting interaction comes in with the Market upgrade, since all players can work semi-cooperatively to move the ship towards the Trading Post space. With more players it moves faster, but it becomes less valuable (since you cannot buy on the same turn that you advance the ship, so you might be contributing towards other players’ success if you’re not careful.

In general I tilt a bit towards the lower player count for this game, but I think having higher player counts is pretty interesting for the complex interactions, so, kinda knock yourself out.

Now I’ve got stuff to talk about! Didn’t really last week, but now I do, since this adds such a new major bit of strategy.

Beyond that, though, the game is mostly the same, so kinda just … do what you normally do.

Seafarers is really interesting! The additional types of cards are a really interesting way to both score extra points and force opponents into an even tighter spot (especially if you’re getting crushed by rough draws). The new cards are high enough value that you should probably still go for them (even though they may not get you bonuses; they’re relatively cheap and very valuable), and they’re not that easy to acquire (since you have to upgrade a Tribal token and move the ship all the way to the destination), which makes them pretty interesting. I’m also a fan of the Tribal Upgrades and finally finding out what that dang third caveman was for! That has vexed me for … a while. I’m pretty sure I would always play with this expansion in play, if for nothing else than the extra Upgrade interaction mechanics (as they’re pretty interesting and a decent trade-off to consider, since they earn you no points).