Full disclosure: A preview copy of Lovelace & Babbage was provided by Artana Games. Some art, gameplay, or other aspects of the game may change between this preview and the fulfillment of the Kickstarter, should it fund, as this is a preview of a currently unreleased game.

So there are some games I’ll just try on principle. Games that are thematically, artistically, or mechanically super interesting to me basically shoot to the top of my list pretty much instantly. That’s part of how I found Ice Cool, a good reason why I love Millennium Blades, and why I main Ocean’s Hungry Grasp in Spirit Island. Naturally, as someone interested in CS education, a game about Ada Lovelace and the Difference Engine quickly caught my attention, and Artana Casual tends to do a nice job mixing education and gaming together, as I mentioned in my reviews of Einstein and its expansion. So here we are.

The 1800s was an exciting time in computing, and in Lovelace & Babbage, you’ll help to make it happen! As computing pioneers, you’ll try to impress patrons with your shiny new Analytical Engine so that you can gain their influence in various areas. You also have your own goals, so don’t forget to actually … do them. Will you be able to lead computing into the next great age? Or will all your efforts on the Analytical Engine fail to … add up?

So, the first thing to do is to set out the Game Board: 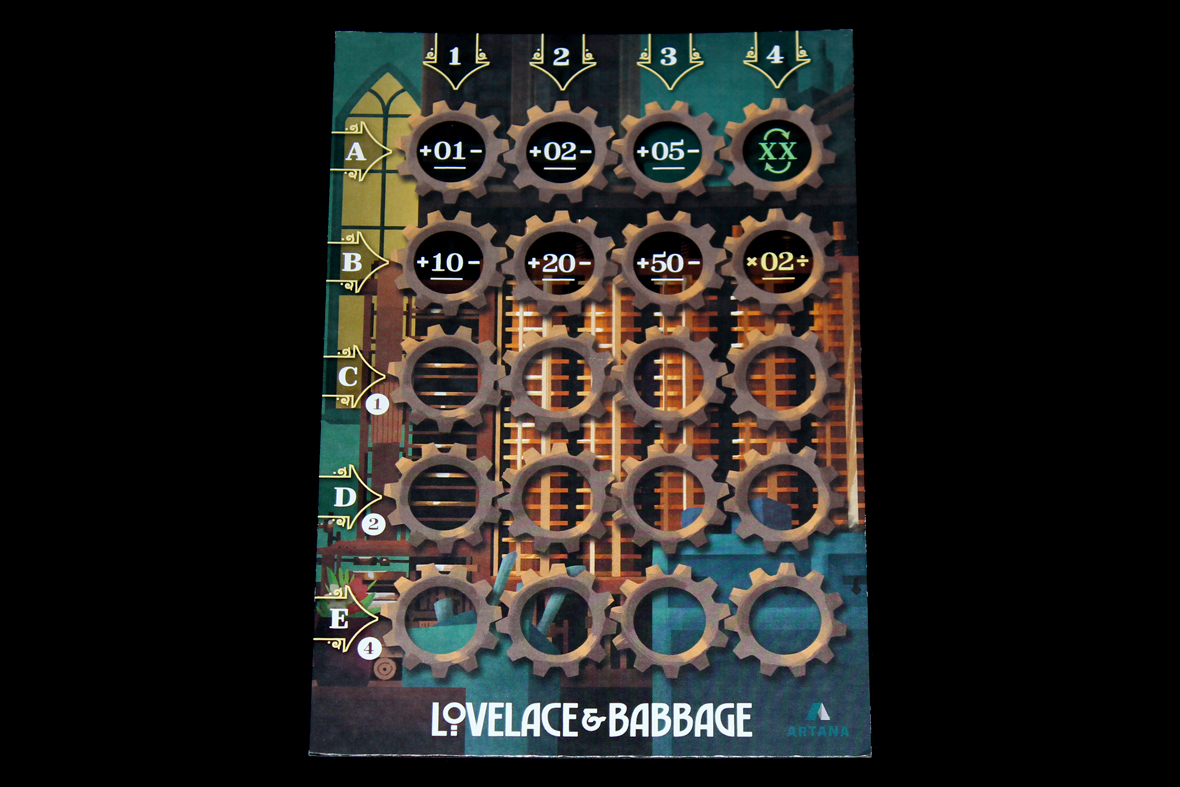 It’ll sit within view of all players. Have each player also choose a character: 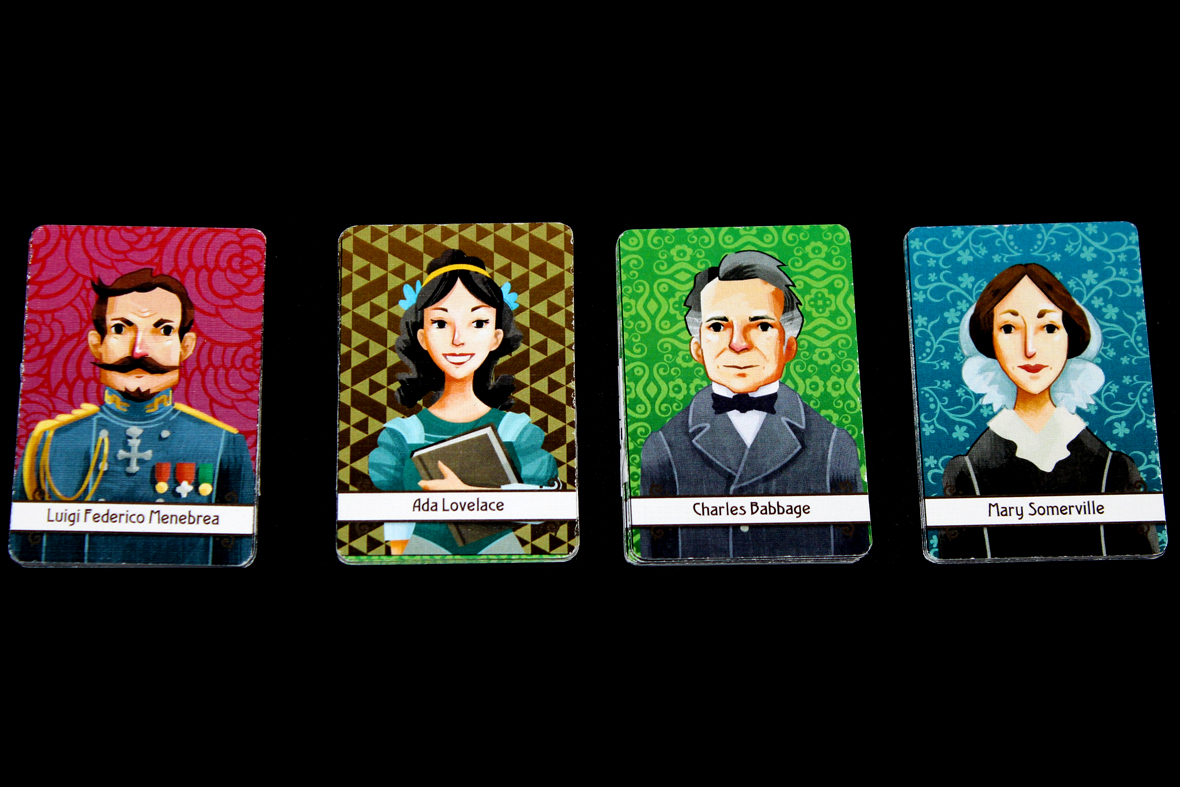 Each has some common and some unique abilities, making the game play somewhat differently across characters. Shuffle the Patrons: Set them aside, for now. Also shuffle the Engine Component Tokens: 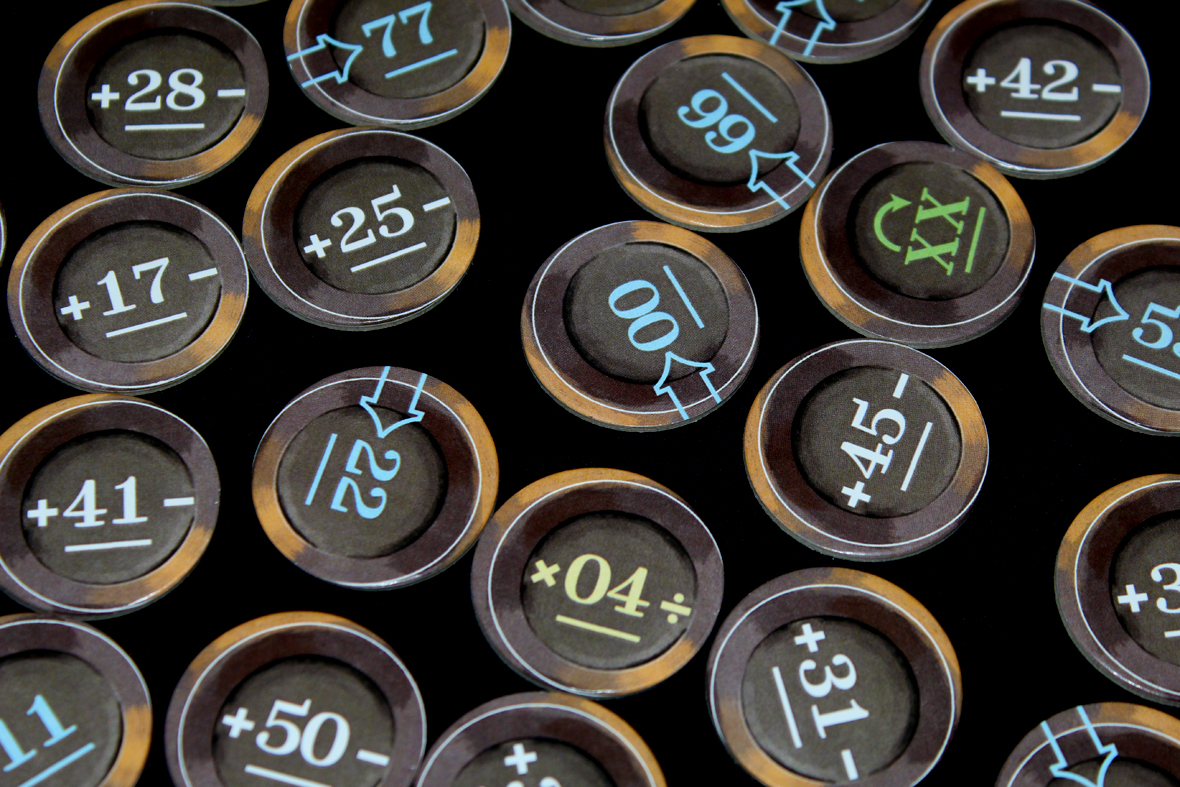 These just kinda … go aside for now, as well. Set out the Order Tokens within reach of all players:

Yes, the timer is the 1st player token. Now, give everyone a score sheet: 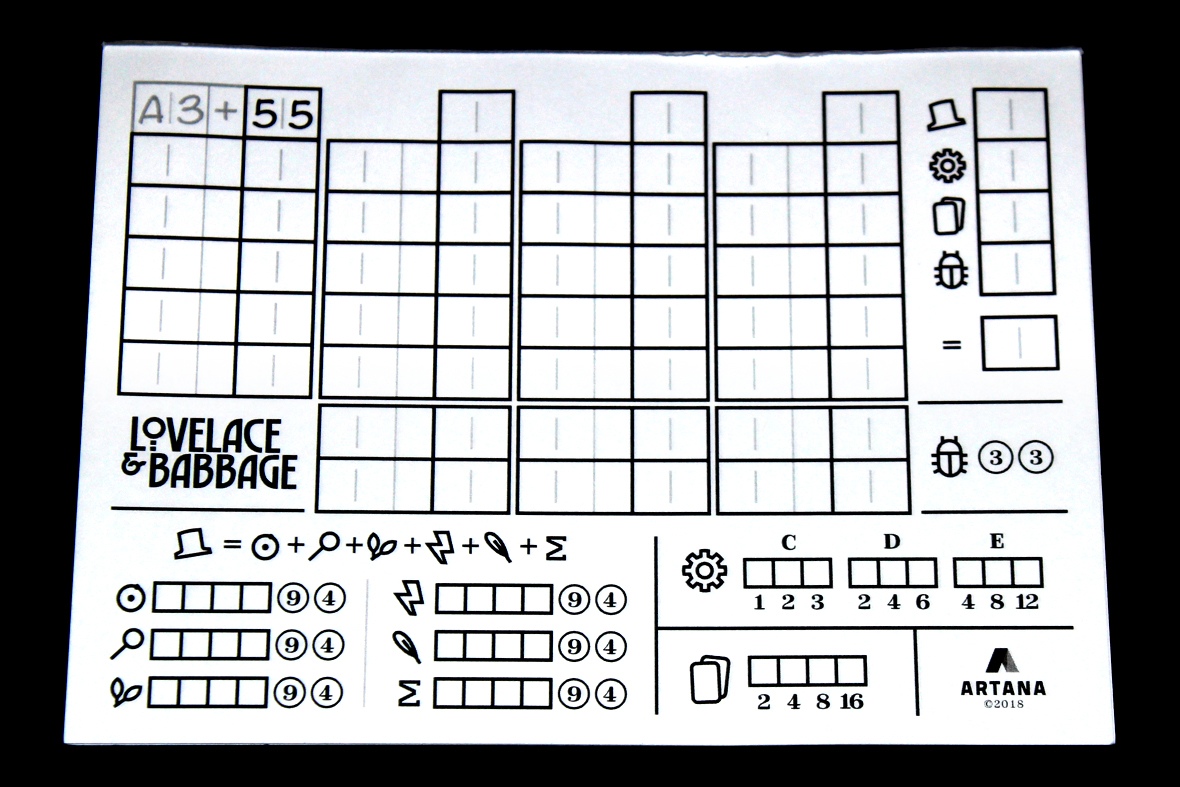 In the final game, the score sheet will have 5 boxes for each of the categories in the bottom-left corner and the Sigma (Failed Experiments) will just be one point each, rather than the boxes thing that it currently is. Once you’ve done all that, you’re ready to get started! 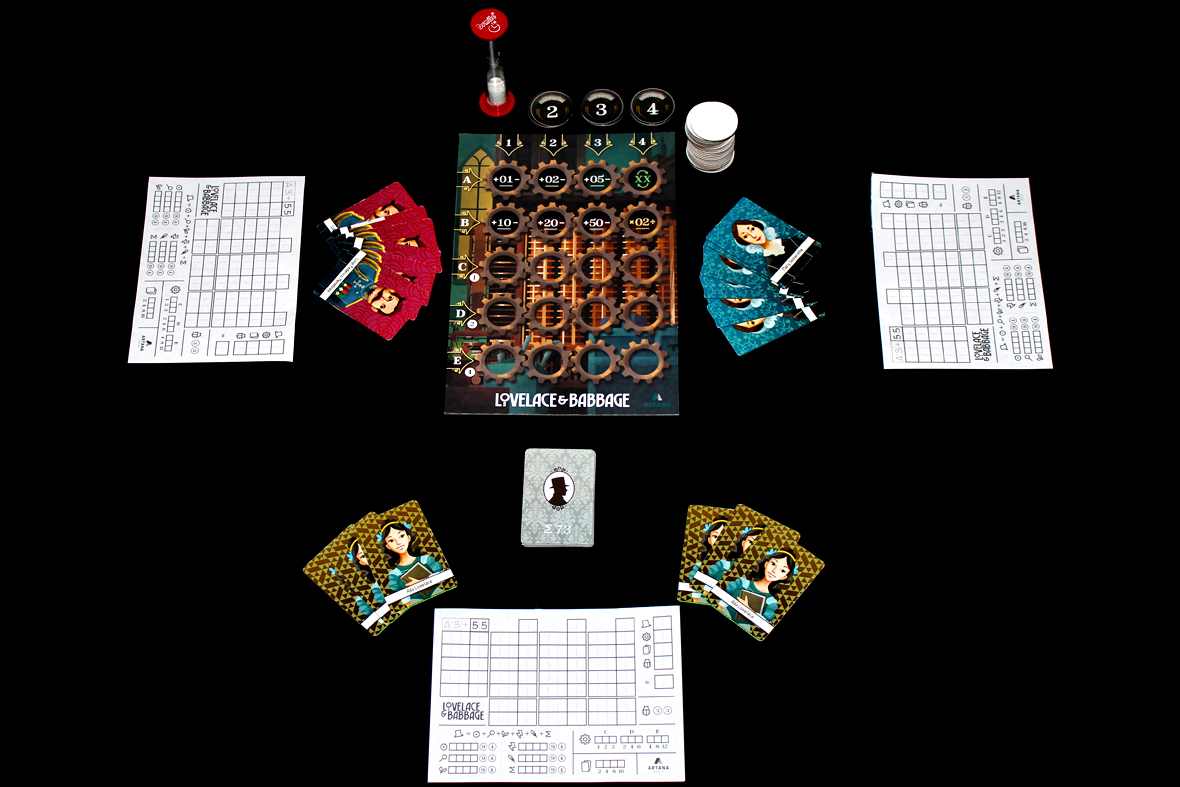 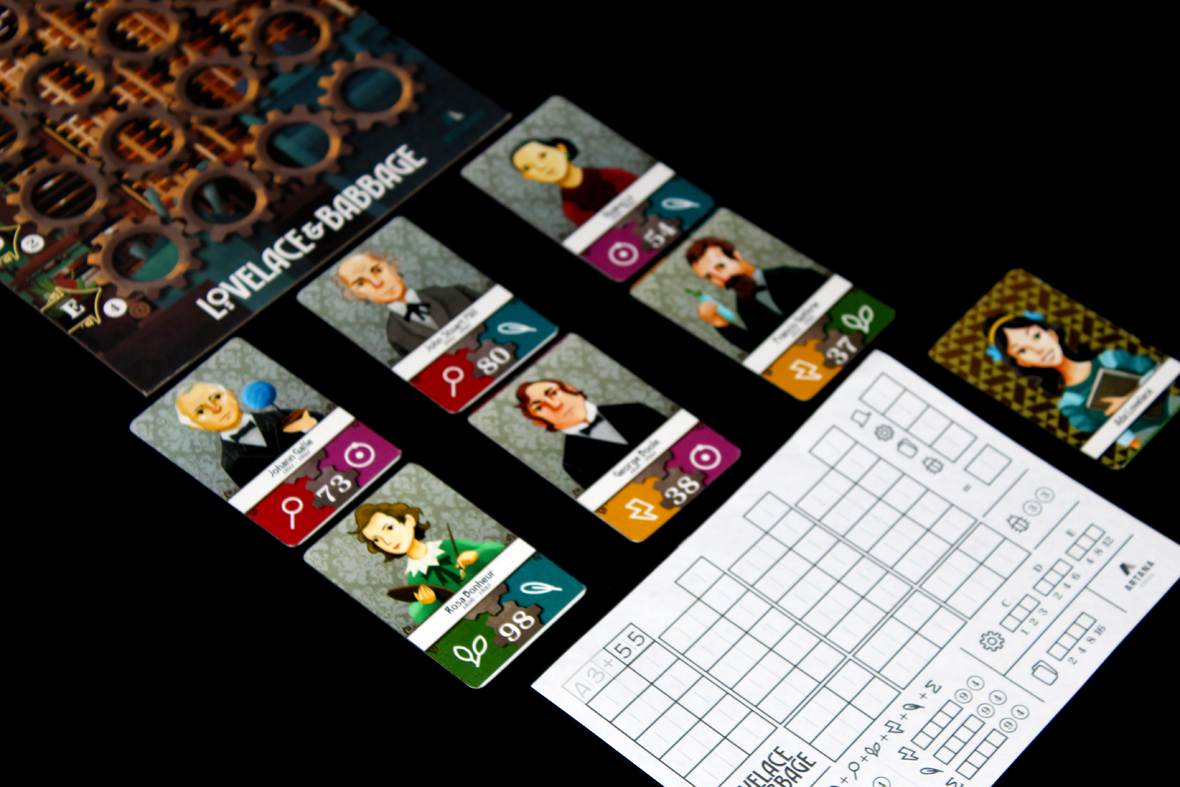 So, a game of Lovelace & Babbage is played over four rounds. During each round, you’ll play a real-time game of numerical calculation to try and hit certain numbers on your chosen Character Card (your Subroutine) and the Patrons in the play area. These will let you score in different areas, and the player with the most points wins. Let’s dig more into each piece of that.

At the earliest point in the round, each player will pick one of the Subroutine Cards in their hand as their target and set it face-down. This is a private goal, though I guess it being public doesn’t matter beyond communicating information to your opponents about your plans. Once everyone’s done that, in Rounds 2, 3, and 4, you may activate any Subroutine Cards that you’ve unlocked from completing them in previous rounds to use their abilities, but you do so in player order from the last round. This avoids the “using cards as reactions” problem I have in some games, so, appreciated. This is the only point in a round that you may activate your Subroutine Cards. If you don’t now, you’ll have to wait until the next round to do so. 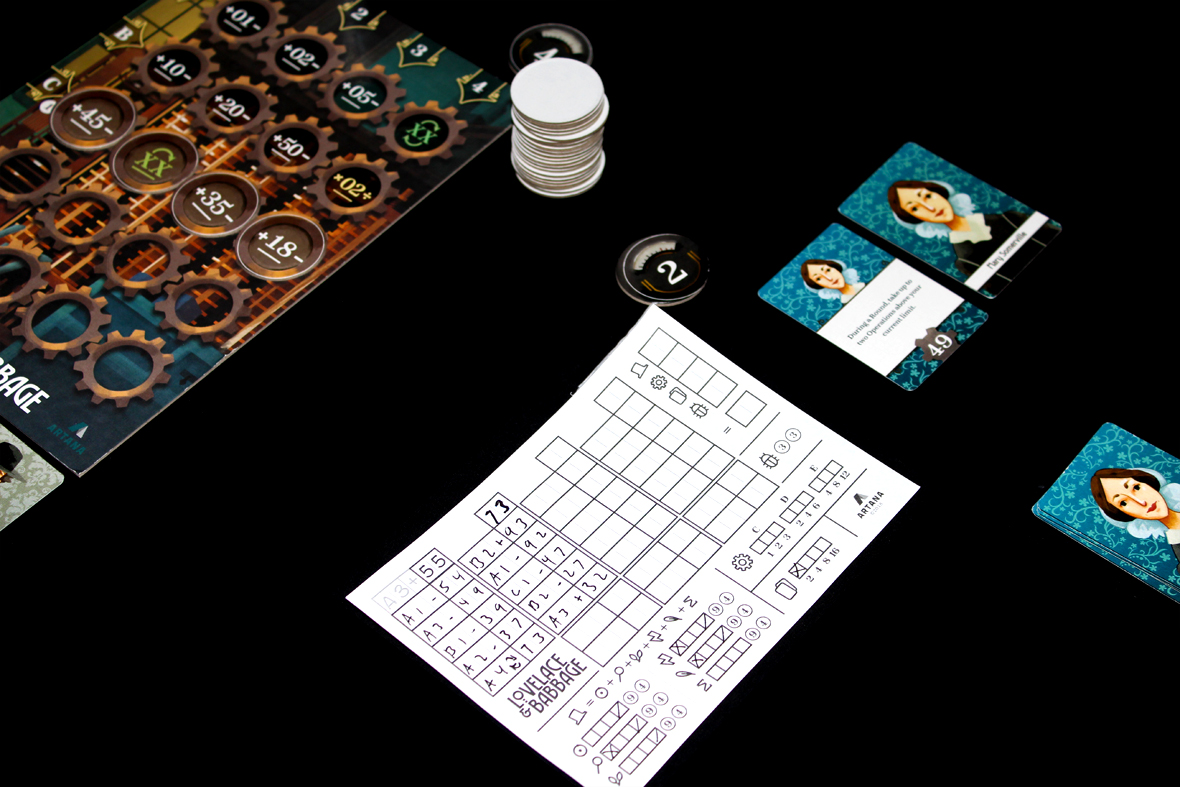 To start the round, you’ll flip over Patrons; use the following for each player count:

Once you do that, the round immediately begins! In Round 1, every player has the same starting number: 55. In subsequent rounds, your starting number is whatever your previous round’s final result was. You have 5 (sometimes 7, if you use an unlocked Subroutine) operations to try and hit as many of the target numbers as you can. When you want to do an operation, write the row / column pair and the operation you did; if I want to add 10 to my number, I’ll write B1+ and then my previous number +10. You may not take any operations that would put your number below 00 or above 99. Once you’ve filled out your board, take the lowest available Order Token. If that’s the First Player token, take the timer and flip it. You can no longer edit your operations, but the other players now have 60 seconds to finish up their operations before the round ends. If they don’t, they simply don’t get to use those operations.

Now, in player order, take turns resolving operations. You’ll resolve one per turn. As you do, you might hit various Subroutines or Patron values. If you hit a Subroutine, reveal it; you may use its ability during one subsequent round. Also, check off the Subroutine track in the bottom-right of the board; you’ll earn end-game points for completing more. If you hit a Patron’s value, well, resolve it depending on how many other players hit it before you:

If you used a C, D, or E row operation to hit a Subroutine or Patron value, check off a box in the relevant section. Again, worth endgame points. Treasure them.

If, during the course of play, you realize that you’ve made an arithmetic error (this happens with speed math), you may check off one of the Bug spaces to Debug your program; you may reset and redo your remaining operations, but you only have a minute to do so. You’ll also lose three points at the end of the game per Bug. So, try not to do that. 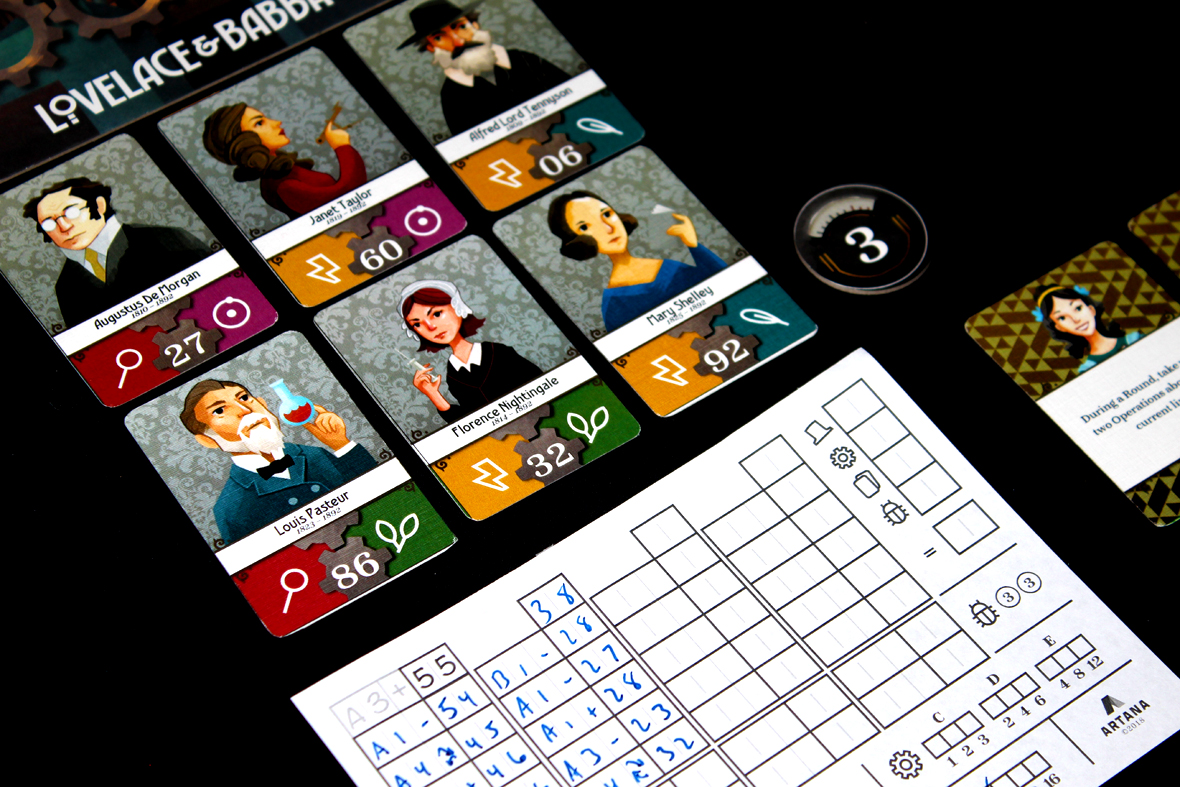 That’s basically a whole round! Play continues until the end of Round 4, at which point you tally your points (or negative points) from various influences. With regards to Influence, specifically, you gain 9 points if you have the most Influence of a type, and 4 if you have the second most. If you’re ever tied for 1st, split 1st and 2nd between all players who are tied. If there’s a tie for 2nd, just split 2nd.

The major difference at higher player counts is going to be contention for the various Patrons. I mean, the game itself doesn’t have much in the way of player interaction (beyond kind-of-aggressive Subroutines, which I will get to later), so that’s really the only way you can do it. Even then, it’s hard to specifically go after something your opponent wants until you actually have the Patron. Either way, what I’m trying to say is that there aren’t may differences, and even then I’m happy to play this at pretty much any player count. Makes me wish there were a solo mode! 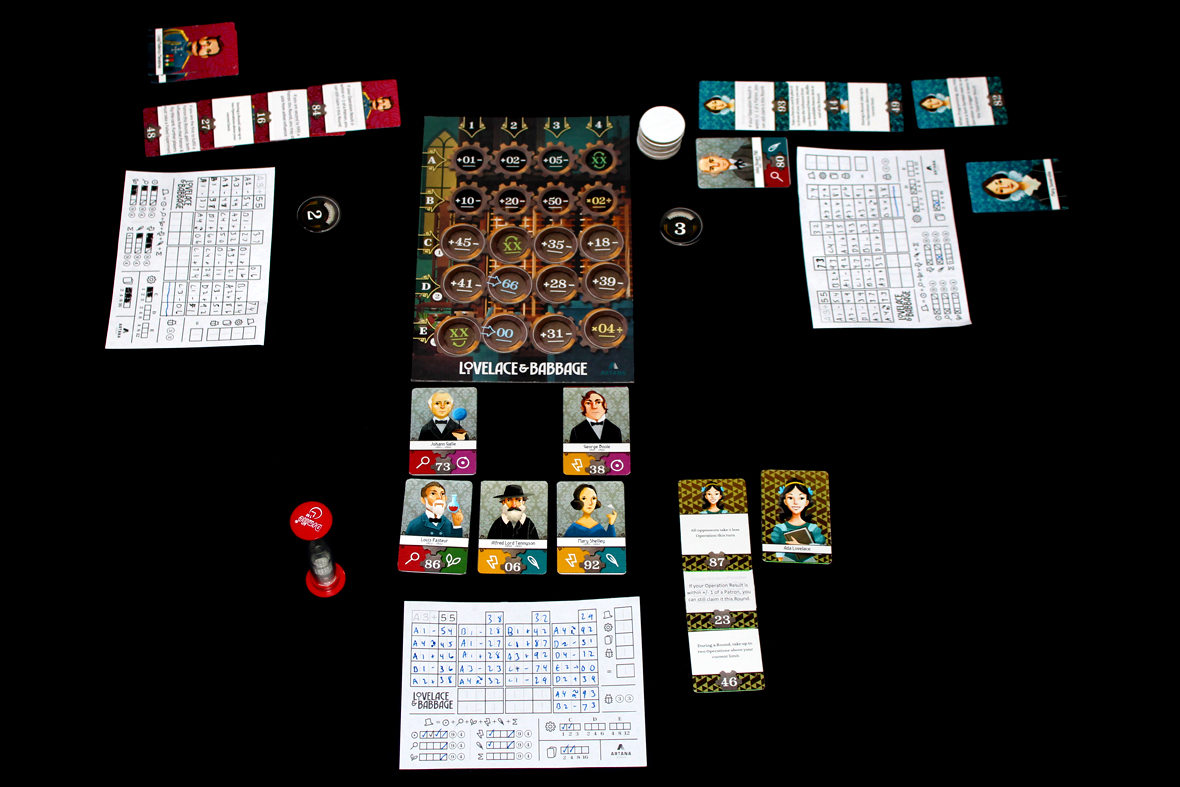 Overall, Lovelace & Babbage is a blast! I’m a big fan of real-time games already, and the math aspects of it are kind of  I’m hoping the full version will have some upgrades, like more Patrons and operations just to make the game a bit wackier. I could even imagine an Einstein-like expansion that adds in some more difficult / optional operations to try and balance the game a bit for younger / less experienced folk, as I find that this is another game that’s a bit easier for players who have played it before. But that’s my opinion. Hopefully you’ll get a chance to try it for yourself, as when it hits Kickstarter, I’d definitely recommend checking it out!