Full disclosure: A review copy of EXIT: The Pharaoh’s Tomb was provided by KOSMOS.

And we’re back with another entry in the phenomenal EXIT series: The Pharaoh’s Tomb! That makes four EXIT games we’ve checked out on the site, now, and I think another two in my current batch to try out either this week or in the next couple. I’m hoping y’all find these valuable; at the very least, I’m having a blast playing them and figuring out how to tell you what I liked about them without spoiling anything major. To that end, here we go again!

Somehow, you, the Unluckiest Person Alive With Regards To Getting Trapped In Places, decided to go to Egypt in what can only be called Beyond Tempting Fate and more of a “Please Smite Me Personally” challenge to the entire universe. Respect, but, also, questionable. Sure enough, while wandering in a pyramid with your tour group, you and your crew decide to try going on your own adventure in what can only be called desecration at like, the most generous. You wander into a burial chamber when, right on cue, the stone door slams shut behind you. Bad news; you’re trapped. Good news; you’re really good at getting untrapped, by now. Will this latest challenge be just another stepping stone, or will you finally get stuck somewhere and lost until the end of your days?

As usual, you’ll take the components out of the box. Put the Answer Cards, Riddle Cards, and each set of Hint Cards into their own pile. There’s an extra Hint Cards that doesn’t go with any of the others, because it’s how to translate the symbols on this disk: 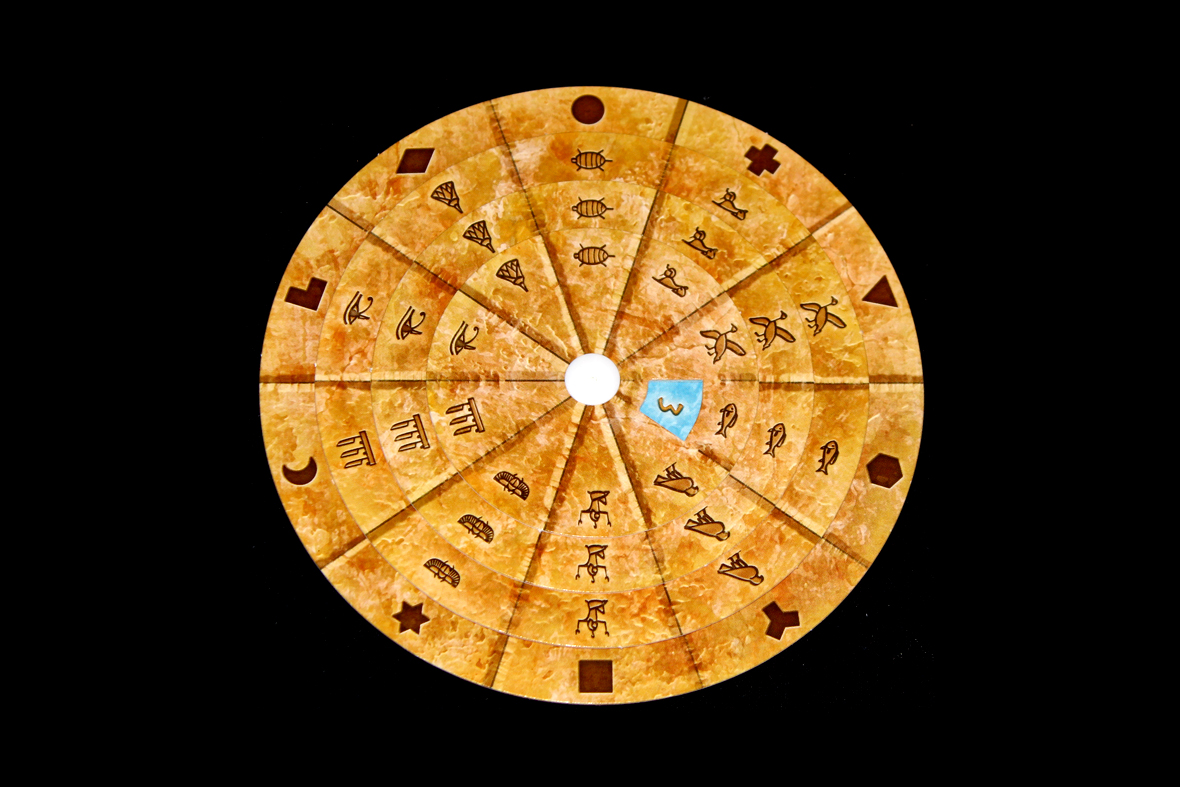 Just like The Secret Lab, you’ve got symbols on the disk again that will need to be translated into numbers. But how? Well, you’ll have to figure that out. The other pieces (not pictured) can stay in the bag, for now.

In what has become pretty commonplace for the EXIT series, you’re trapped in some location with only a helpful book, a disk, and some riddles to try and guide you out. You think you can potentially find new riddles if you solve the old ones, and these will somehow lead you closer to the finish. I’d recommend going for that; it seems like a pretty good idea.

If you ever get stuck, use a Hint Card for that puzzle (denoted by its icon). They count against your overall endgame result, but only if the Hint Card used tells you something you didn’t already know. I usually use them to check my math if something seems suspicious.

If you manage to solve all the riddles, you’ll escape! If not, well, you’re stuck in the pyramid forever. That’s a bummer.

We actually started this one with three and finished with two (our third had to leave, but I think we just created a monster, as them loves escape games) and I felt like it was pretty good. My main complaint is that I didn’t realize how much of the game we take for granted having already played several, so we needed to spend a bit of time walking our new player through things like “one Answer Card may point you to another Answer Card”. It probably would have helped if I had read the rules (or given them to them) first. Alas; that’s on me. Anyways, there was plenty for people to do, but I felt this one was a bit tight at three. Two was perfect, three we might have had one person checking the work of others. Your mileage may vary on this, but that’s probably my rec. Best at two, then three, then one, then four. I’m not into most of these as four-player games; I just don’t think there’s enough independent work.

You’re going to have to figure that one out on your own. My best advice is use the Hint Cards to make sure you’re on the right track for the problem you’re trying to solve; don’t just assume you’re correct.

The general Pros / Mehs / Cons for this game still apply. Here are some more specific ones for The Pharaoh’s Tomb.

Overall, out of the four I’ve played, The Pharaoh’s Tomb is definitely my favorite so far. The theme is fun (and rife with Indiana Jones-esque references, if you know where to look) and I think the puzzles are challenging, but not frustrating. This was one that I wish I could pick up and start over again (with new puzzles, of course) so that I could enjoy the experience of trying it one more time. Sure, there was one puzzle that was a bit frustrating because the contrast on some of the important parts was too low so it was hard to see, but that was kind of a blip in an otherwise superior game experience. We almost finished it in an hour! I was very proud of us. I think that we’re really starting to “get” the EXIT games, and I’m definitely looking forward to the next one (well, two). If you’re looking for a fun (but challenging) EXIT Game, you love gentle references to KOSMOS’s other famous Egypt-themed game, or you just really like ancient Egypt in general, I’d really highly recommend checking out EXIT: The Pharaoh’s Tomb! We had a blast playing it.