Full disclosure: A review copy of Woodlands was provided by Ravensburger.

We’re starting to finish up the Gen Con reviews, which is exciting. There are still a lot more, but there are far fewer than there were a month ago (or a month before that), so maybe I’ll be finished by Gen Con next year??? It’s nice to have goals. Anyways, let’s look at the other Gen Con game I checked out from Ravensburger (along with The Rise of Queensdale), Woodlands!

In Woodlands, there are new stories to tell deep in the forest. These stories have danger, good, evil, spiders, a magic sword, a cosplaying wolf, and even a lot of money, but you’re emboldened by that and will try to see what they contain on your own. Can you lead your heroes to a happy ending? Or will your tale wind on for far too long before its terrible conclusion?

Setup isn’t too bad. Give each player a set of tiles:

For advanced players, you’ll be able to use the back sides:

They have slightly different rules; I’ll explain later. There are also special tiles:

Those may come up as a bonus effect during the game. Also give each player a starting board:

Set out the gems: 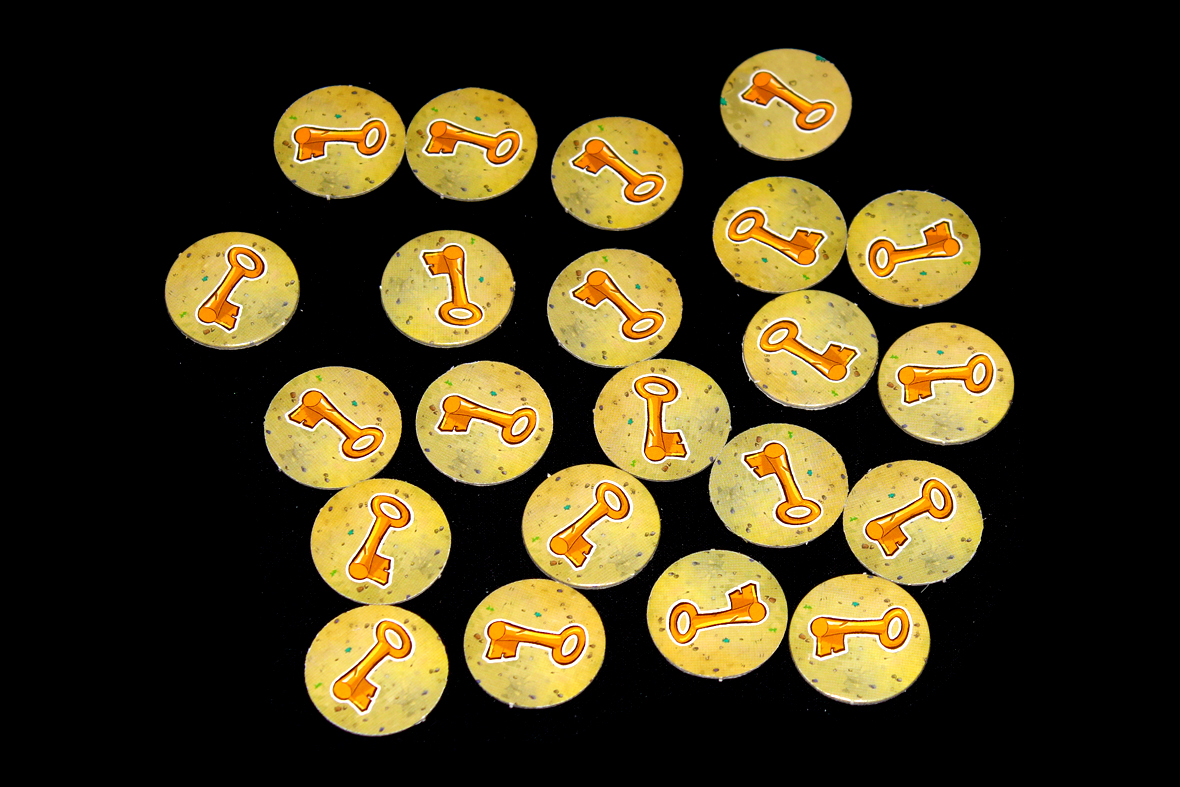 And the Treasure Cards:

You’ll want to choose one of the four chapters: Red Riding Hood, Robin Hood, King Arthur, or Jonathan Harker’s story, and grab the hero associated with that:

You can also grab the overlays, but I’m not going to take photos of all the overlays both because they’re transparent and I feel like that kind of messes with the novelty of the whole thing? I’ll throw you a bone, at least, here’s what one looks like against the standard board you’re supposed to lay it on:

The board is completely white and kinda glossy so that the overlay shows up nicely. It’s nice. There’s also a sand timer, but as I’ve mentioned in a few other reviews I’m trying to avoid uploading more photos of sand timers to BGG, so I’ll refrain from including a picture of it here. It’s a standard sand timer.

Once you’ve done all that, get the players ready to start and you should be able to get going! 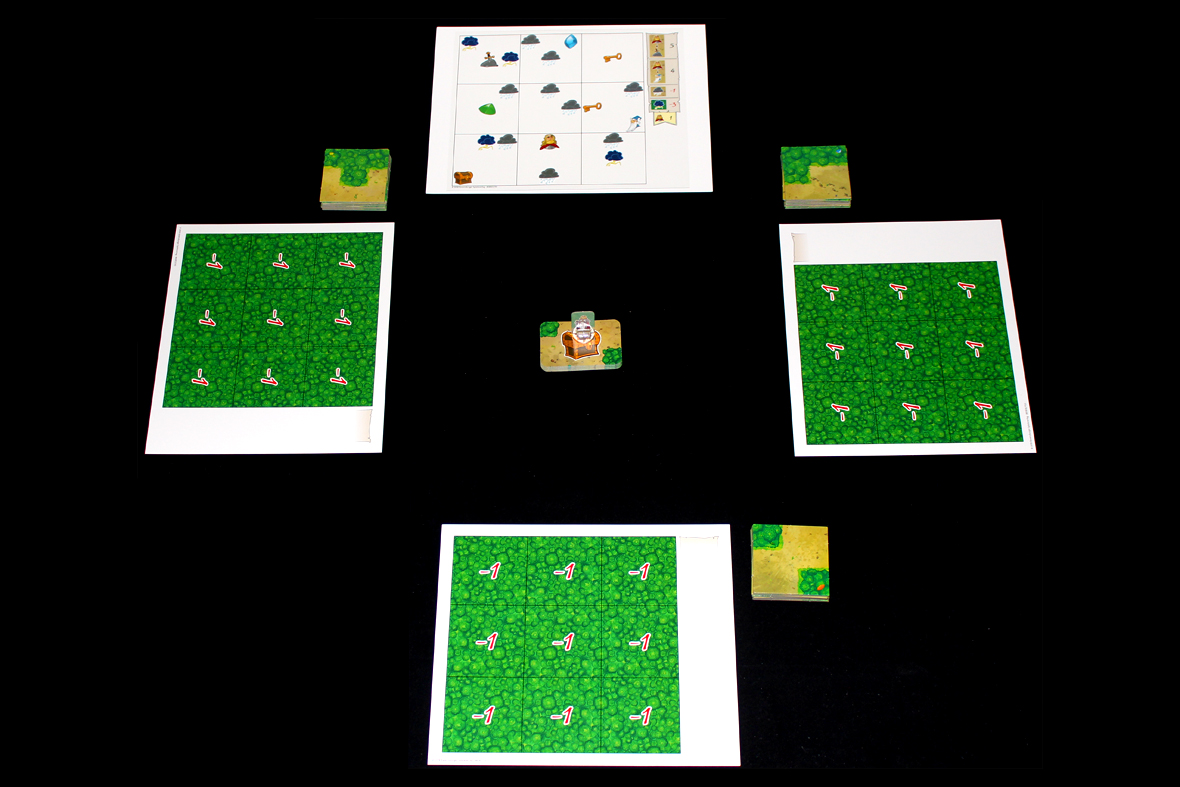 Woodlands bears some similarity to a mixture of Eco-Links and Fairy Tile; you’re playing a real-time tile-laying game, but the actual ways the tiles should be placed is given to you as a series of stories in a larger fairy tale / fable / legend of some kind. The general gist is that you look at the overlay and try to place the tiles as quickly as possible, and then you lay the overlay on your board to see how you did. The better you did, the more points you get, and the player with the most points at the end of the story wins. Let’s talk about that in more depth.

So, as soon as the game starts you’ll flip the timer over and get going. You can place, reorient, and replace any number of tiles on the 9 spaces on your board as much, as often, and as quickly as you want, but you are not allowed to flip them over (nor, if you’re playing the basic side, would you want to). You’re doing this to try and fulfill objectives that are printed on the overlay. Don’t worry if the timer runs out; you can keep going.

Once one player feels that they’ve accomplished all they can, they may wait for the timer to run out and once the timer has run out, they may flip it again. Similar to Eco-Links, you now have until the timer runs out to complete your tile placement. They also gain a white gem as a bonus reward. Note that only once a player flips the timer for the second time in a round does the time matter. Before then, it’s just a thing you can observe and kind of a buffer.

After time has run out or all players have completed their placements, you move on to scoring. Each player (starting with the first player to finish) takes the overlay and lays it on top of their board so that they can see how they did. Place the Hero token on the starting space and walk it to various objectives on the path, keeping in mind what is recommended for this particular scenario (in some scenarios, for instance, you may only walk through the forest, or you cannot have a campfire in the forest). As you walk over gems or keys, you may take those from the supply; if you walk over a Treasure Chest and have a key, you may discard it to take a Treasure Card and activate the card’s effect immediately.

If you fail to fill any spaces on your board, you lose one point per unfilled space. That’s rough, but importantly, you can never score fewer than 0 points. If you would go negative, just score 0 instead. As you score, keep track of it on a pad of paper or something (there’s space for it on the back of the rulebook, but that feels fairly … permanent). Once you’ve done that, return the overlay to the box, read the story for the next chapter, pull out that overlay, and go again! Note that generally speaking, the player with the highest score will have an additional challenge: they must collect the Chalice of Glory each round, or they lose three points! It’s a pretty solid catch-up mechanism, to be honest. 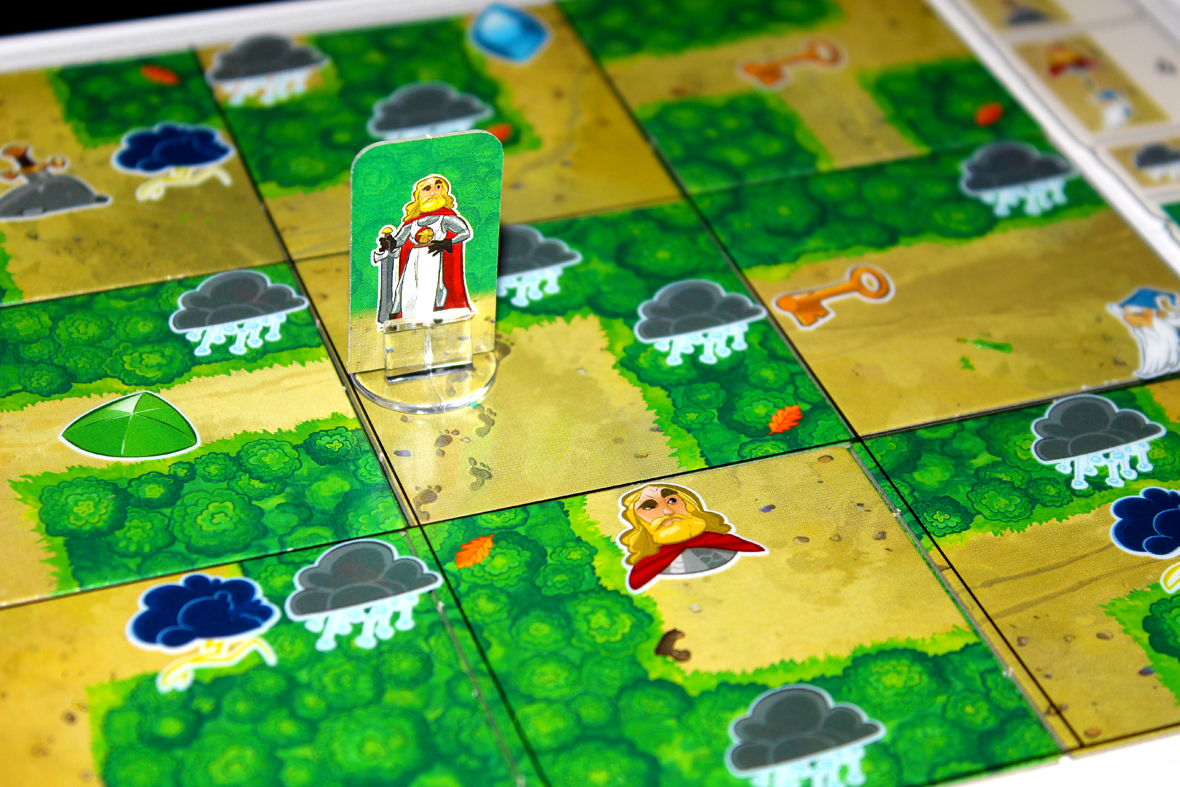 Once you’ve completed all the game’s chapters, the game is over. Count your points from each round, and add in the value of your gems. Gems are worth 1 point each, but if you have a set of a Red, a Yellow, a Blue, and a Green gem, you score an additional point (so 5 total). White gems may be used in lieu of any other color gem. The player with the most points wins!

Overall, though, I think Woodlands is a lot of fun! I really do like the real-time aspects of it and I enjoy the chapter-based progression, as both really do give the impression of quickly making your way through a fairy tale (similar to Fairy Tile, though I think the immersion in the story is a lot better, here, since it’s less generic). That said, Fairy Tile has some wins as far as replay value goes, as it’s easy to pick it back up and play it again (though I’d love to see more new cards). Woodlands, too, kind of suffers in that regard; I definitely think it’s good, I definitely enjoy playing, but I also worry that I won’t be able to ignore the similarities between boards, long term. This can be mitigated in several ways through expansion content, and I hope Ravensburger capitalizes on the opportunity to improve a neat little game system. That said, this problem also probably won’t come up that much in groups with very new players unless they’re specifically trying to do this, so, your mileage on the game may vary. Either way, if you’re looking for a neat tile-laying game with some real-time aspects, or you want a fun gamey spin on some classic fairy tales, Woodlands is definitely a game worth checking out!