Still running a giveaway this week! Check it out if you want to win ICECOOL2, ICECOOL’s standalone expansion! For more flicking games, keep reading!

Alright, more Gen Con games — this one’s a neat one; Kung-Fu Zoo, a dexterity game from Trusty Lamp Games. As you might guess, I’m definitely a fan of animal-based flicking games, but how does it measure up against my personal favorite? Read more and let’s find out.

In Kung-Fu Zoo, well, you’ve stayed a bit later than you should and you’ve found out a secret. After dark, when the last employee has finally left the park, the animals sneak out and participate in no-holds-barred cage fights! Gather your team and leverage their special skills if you want to come out on top of this match. Will you be able to win the bout? Or will you get slammed by your opponents?

So, for the setup, set out the board: 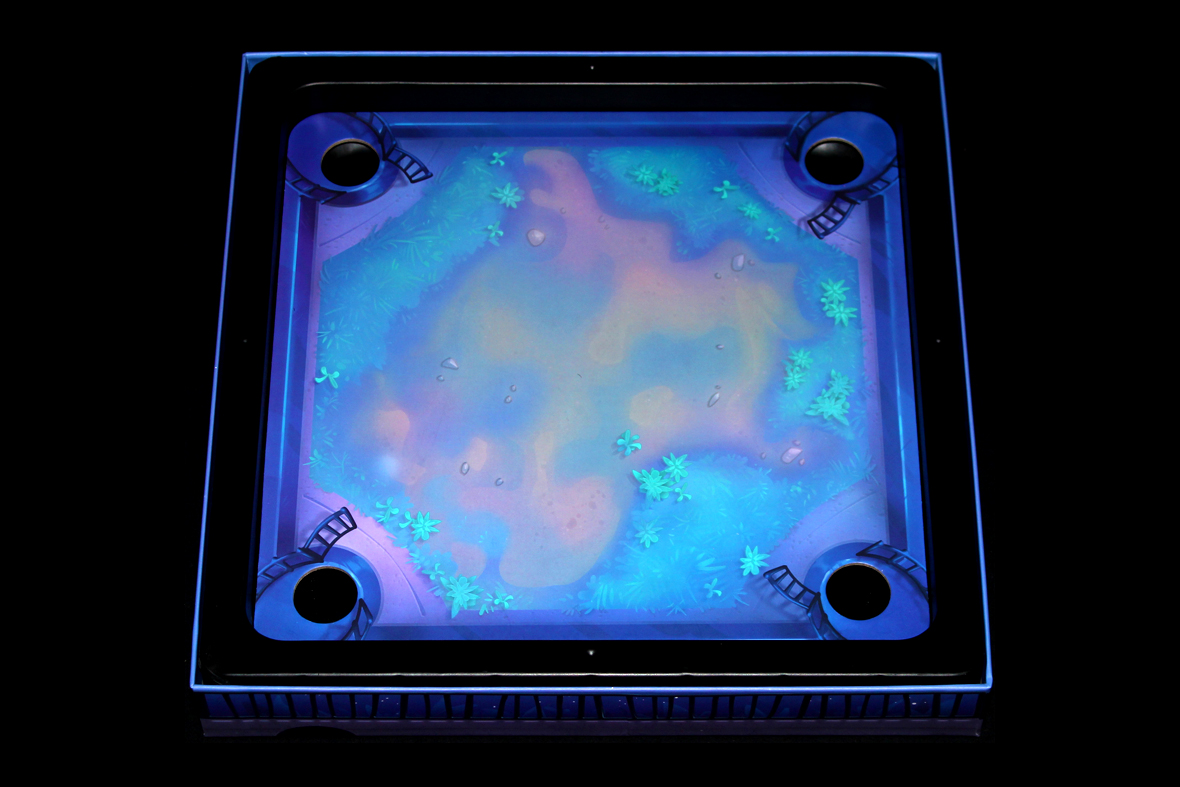 Yup, it’s the bottom half of the box. Give each player some dice in one color:

Also let them choose their fighter, depending on your mode. There’s Cage Match Mode: 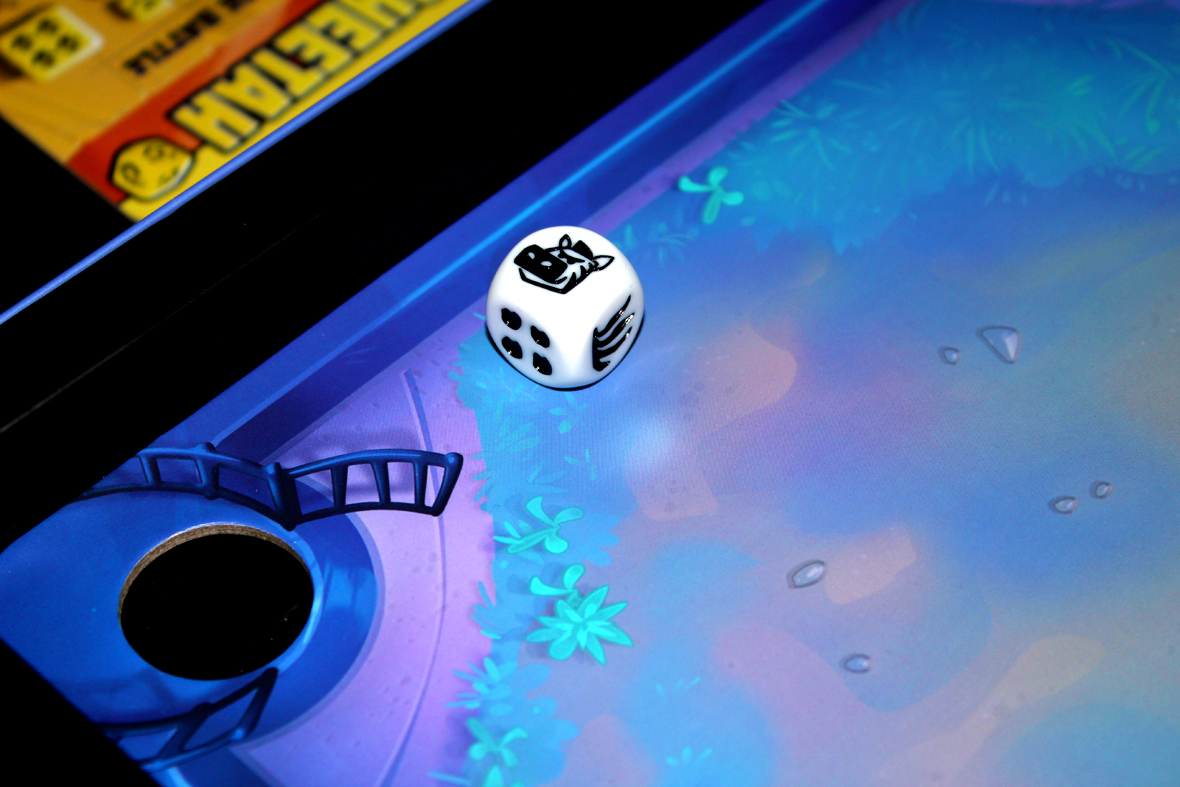 So there are two modes; Cage Match and Points Match. I’ll explain each, but the same general rules apply:

That’s the core of the game.

In Cage Match, you’re doing that in service of dunking your opponents back into their cages. This means you only stop when your opponents’ dice are in the cage holes or all feet-up (meaning they’re stunned).

However, since you only stop when you win, you gotta send your animals back into the ring! Once you’ve gotten your animals in there, you can pull any non-stunned animal out and place them on the midpoint of a rail and flick them again on your turn. If they’re face-up (you can see their face), you can put them anywhere on a rail instead.

If you manage to knock an opponent’s die into a cage, you may take another shot for free. If you knock their die out of bounds, they may replace it, face-up, anywhere in the arena. Naturally, penalties take precedence, so if you knock both your die and your opponent’s die into cages, you don’t get an extra turn. 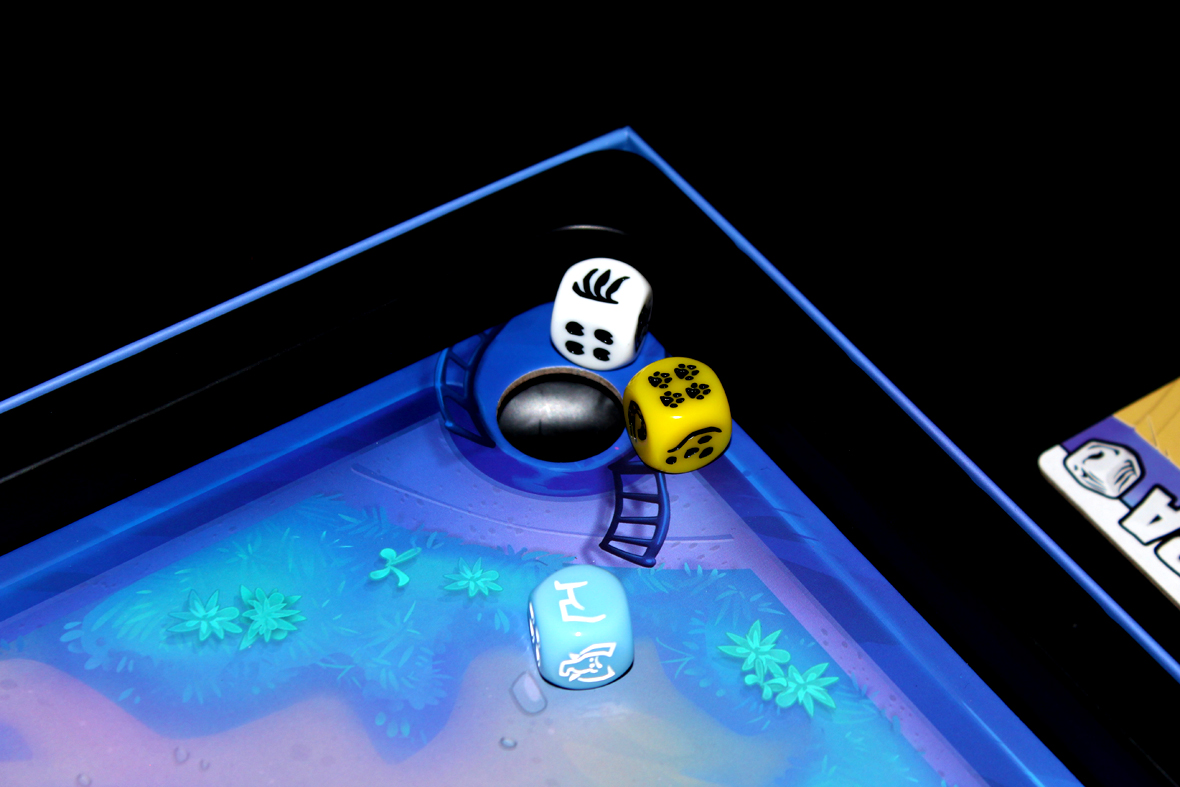 In this mode, each animal also has a special ability that they can use once per round; check the cards for the exact abilities and timeframes.

If you’d like, you can play with an optional variant where instead of leaving stunned animals, you may flick them with your pinky or your non-dominant hand.

If you knock out all your opponents’ animals, you win the round! First player to win three rounds wins the game!

If you’re playing 3 – 4 players, the rules are the same (though you must use that optional variant that I mentioned) but you may only have two dice in the arena at a time. You add the other two dice once the first two dice are caged, and you must add them on two consecutive turns. 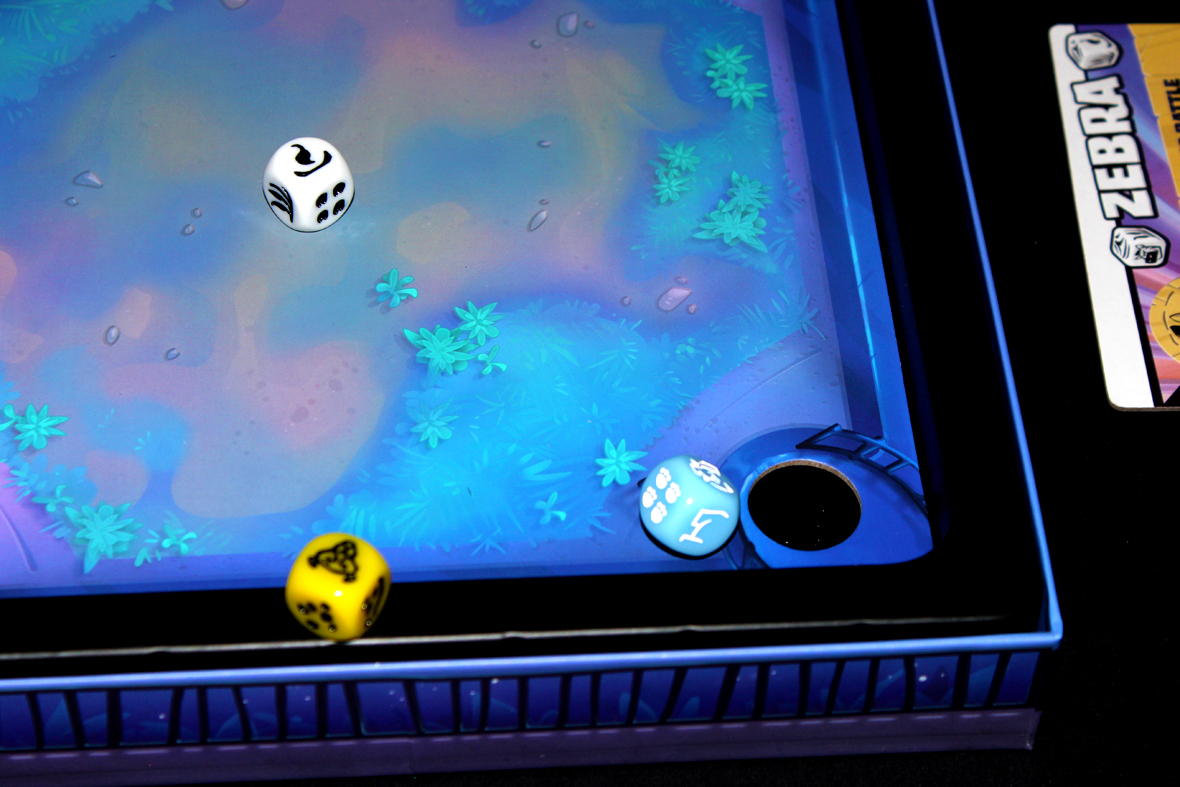 In Points Match, on the other hand, you’re trying to score as many points as possible by flicking your dice in skillfully so that they land with certain sides up (as indicated on your score card). The thing is, your opponents’ dice will also come into play and may knock your dice around.

You’ll score more points for face-up dice, and you still get the extra shot if you cage your opponents’ dice, but keep in mind that you might not want to take the shot if you only have high-value animals currently in the arena. 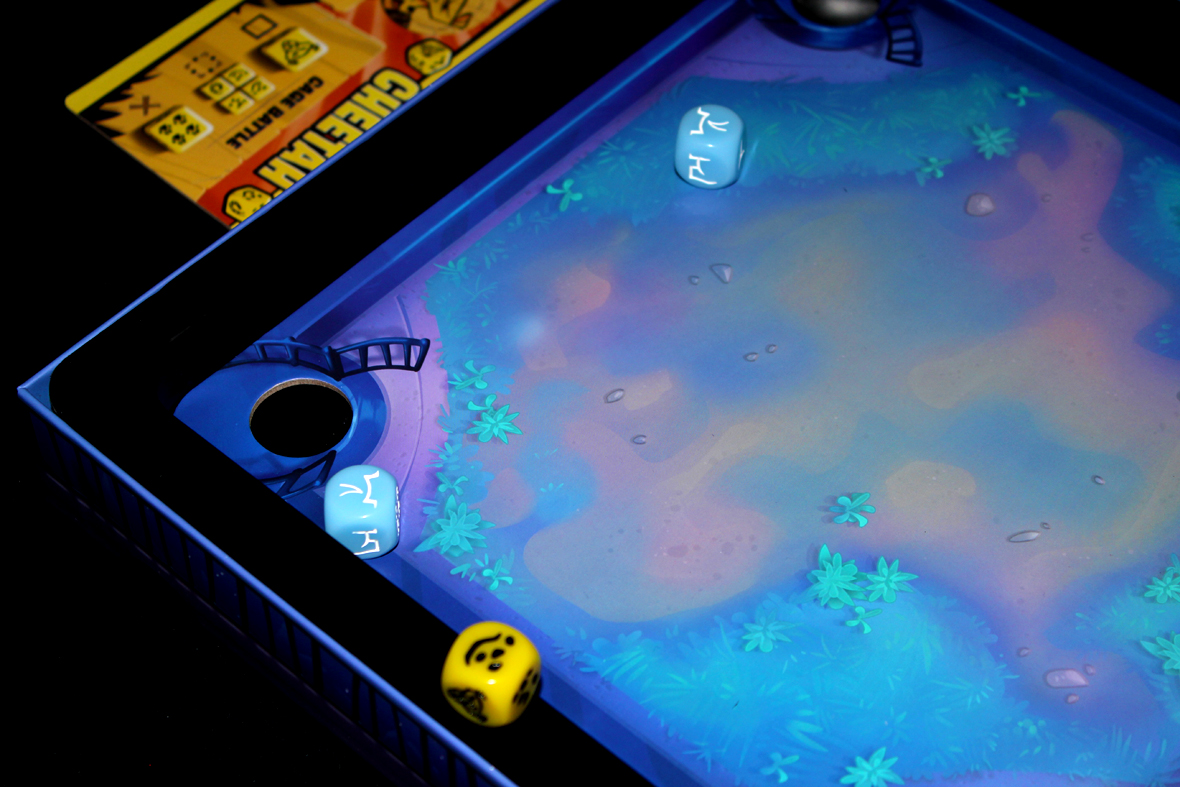 Play continues in a round until all animals have been hit in. Once that happens, score them; the player with the higher score earns the difference between the two scores as points. Then, play another round. When one player finishes a round with at least 21 points, the player with the most points wins!

If you’re playing 3 – 4 players, the rules have a few exceptions:

Mostly covered above, but I think the game is much more fun at 3 / 4 than at two, for me. I like the high-chaos of a bunch of players’ dice flying around and I’m honestly not good enough at the game to consistently knock in my opponents’ dice. I’d much rather play FlickFleet for a two-player dexterity strategy game than Kung-Fu Zoo, which is more of a 4-player party game, in my opinion. My personal preference for KFZ is probably on the higher end of the player count spectrum.

Overall, Kung-Fu Zoo is pretty solid! I mentioned I’m a bit underwhelmed by Points Mode, yeah, and that I wish the rounds took a bit longer, but honestly it’s a very quick play, even at three or four players, which is my preference. That said, I do have a soft spot for almost all dexterity games, especially ones with fun art and fun themes, which this one has. I also think it has a pretty simple system, which means you can probably build off of it to add on new and exciting additional modes and games, which I imagine will probably come later. Always something to look forward to. That said, Ice Cool will probably remain my animal-flicking game of choice, for now. If you’d like a bit more options as to which animal you can flick or dice flicking is more your speed, however, I’ve had fun with Kung-Fu Zoo; maybe you will as well!