Full disclosure: A review copy of Walking in Burano was provided by EmperorS4 Games.

Still running a giveaway this week! Check it out if you want to win ICECOOL2, ICECOOL’s standalone expansion!

It’s time for the last of the EmperorS4 Games that came out for Essen, this week, and I’m really excited to talk more about Walking in Burano! Eventually I’ll also get to the other ones I haven’t tried yet — Sorcerer & Stones, Hanamikoji, and Shadows in Kyoto, but for now let’s check this one out. As usual, if you want to see the other ones I’ve already reviewed, you can find those here.

Walking in Burano casts you as city beautification experts (sort of like Favelas) who are in charge of painting the houses along the river walk to delight tourists who come by to see the spectacle. With the help of some townsfolk, you’ll work to make the city into a place that’s friendly to everyone who venture that way. Will you be able to turn your housing block into a masterpiece?

Setup isn’t too bad; you’ll have a few sets of cards that need shuffled. First is the 1st Floor Cards: 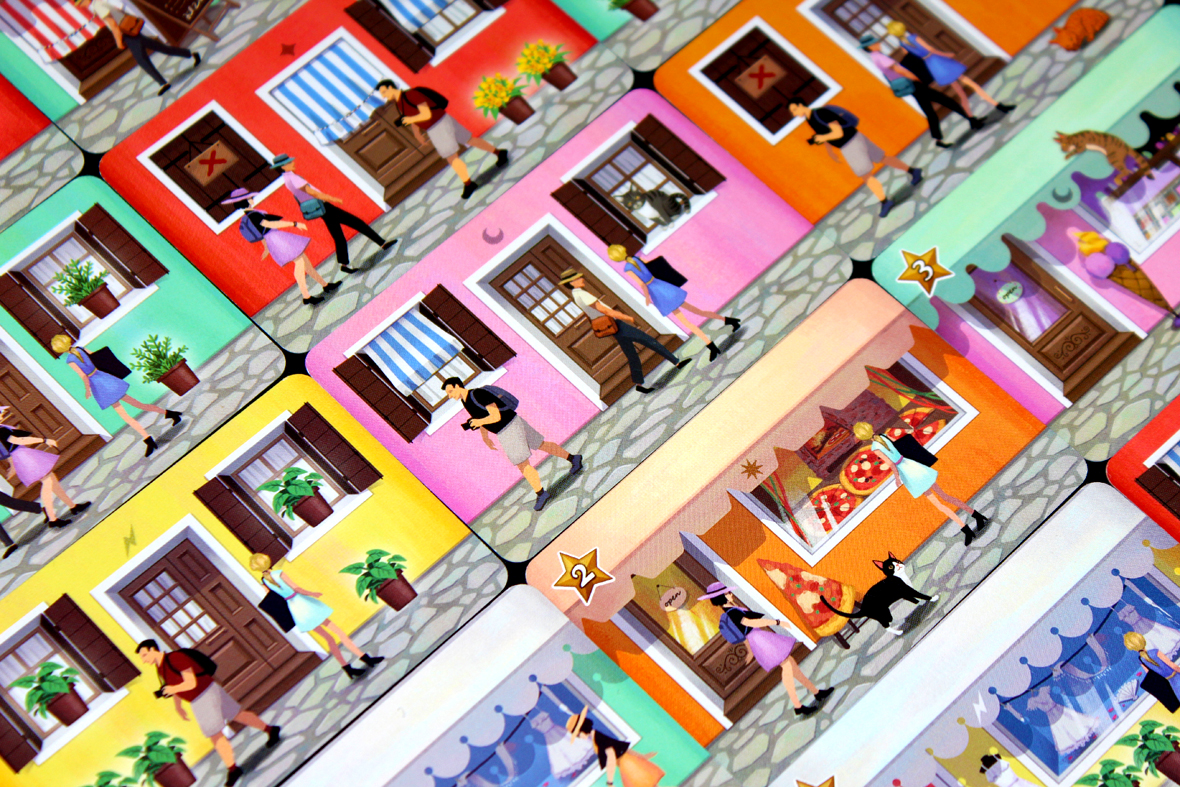 Next up shuffle the 2nd Floor Cards: 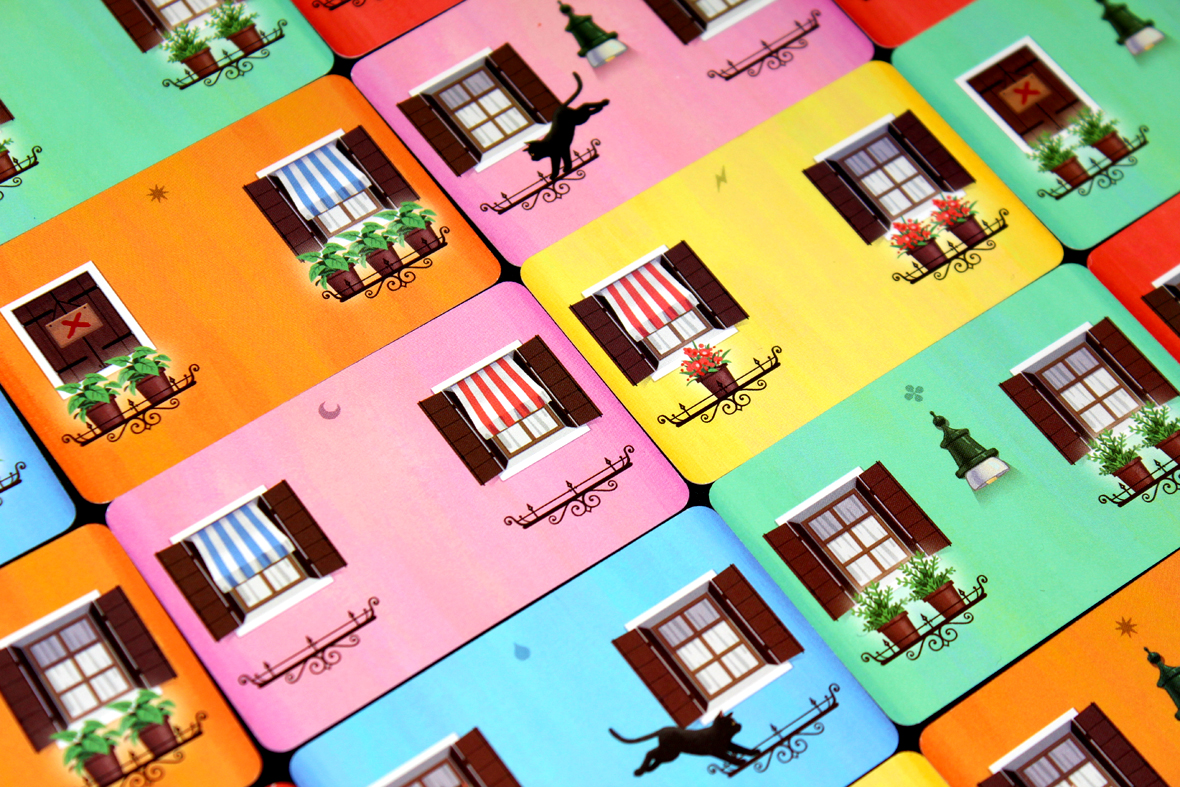 And the 3rd Floor Cards:

You’ll want to reveal cards from these floors in rows to form the Floor Supply. Reveal one more card than the number of players, or, helpfully:

For the solo game, just set it up like a 2 player game. Give each player two Scaffold Cards:

Give each player 4 coins, to start:

And 4 Regulatory Bonus Tokens in their color:

Set the Tourists under the Floor Supply:

Set the Characters nearby, as well:

You’ll want to use a specific breakdown for those, though:

Again, at solo, mimic the 2 player rules. Give one player the Starting Player Token:

You can also set the scorepad nearby: 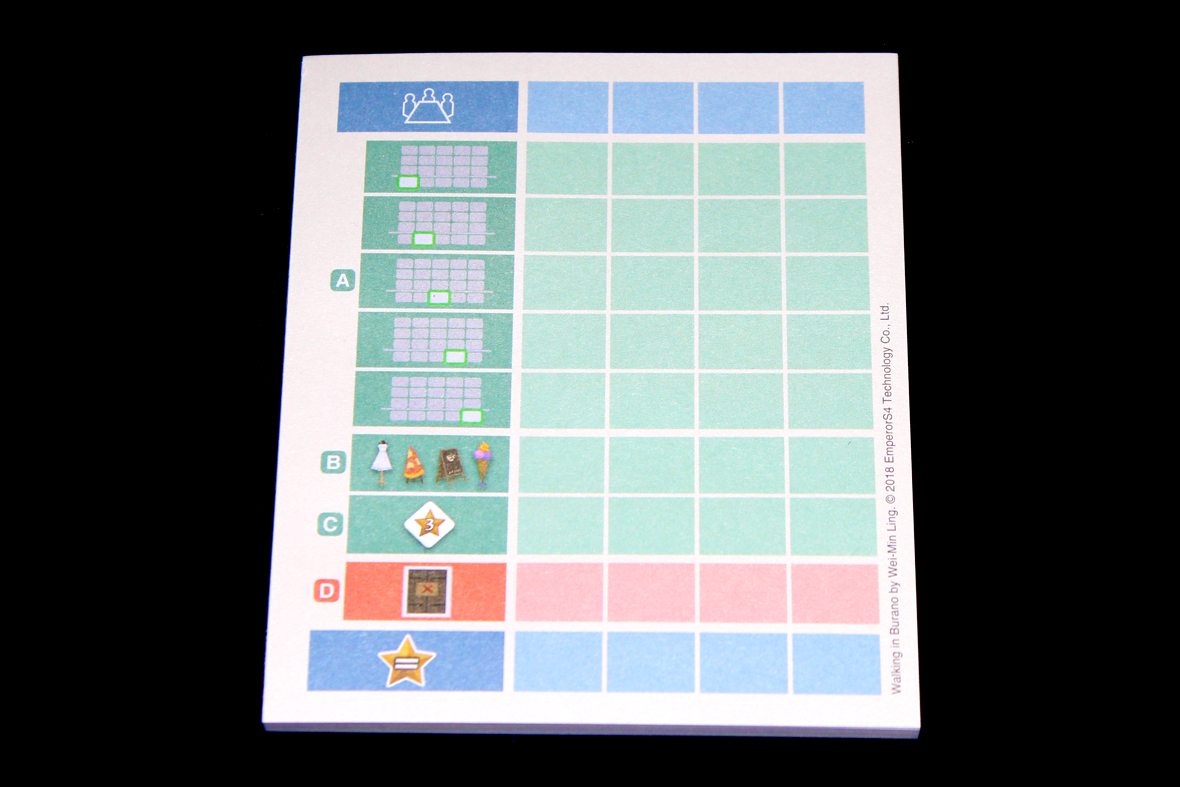 So a game of Walking in Burano is a game of painting houses to try and impress inhabitants and tourists. Once any player has finished 5 houses, the game ends after that round and the player with the most points wins. Recruit tourists and locals to try and boost your score!

A game is played over several rounds in which each player takes a turn. On your turn, you can take cards and build cards. I’ll explain as follows:

On your turn, you must take cards from one of the columns of the Floor Supply. You must take at least one card, and you may take starting with the topmost or bottommost card of any column. When you take, you may take the next card in that column as well, so you may take a maximum of 3 cards.

If you do not take 3 cards, take one coin for each card you don’t take. This means if you only take 1 card, you gain 2 coins.

You may optionally build cards onto your houses. There are a few rules: 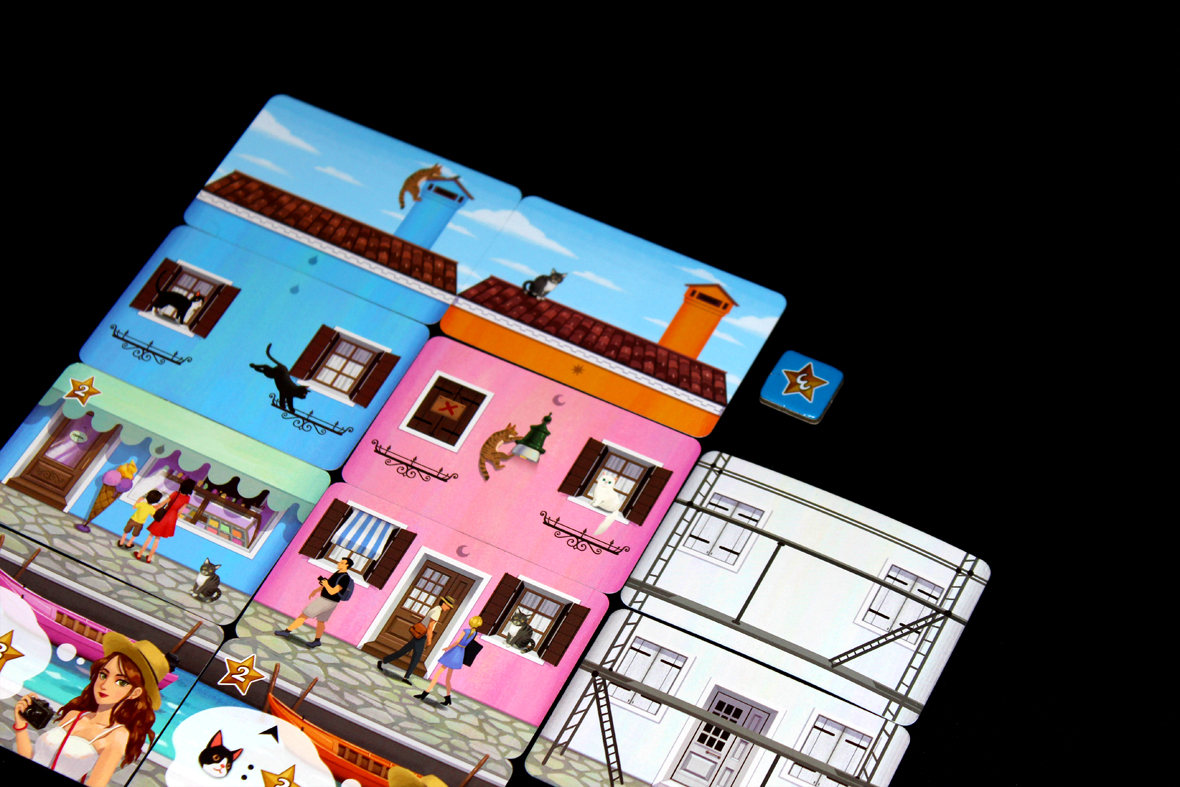 If you find that you need to break one (or both!) of the bottom two rules, you may discard one of your Regulatory Bonus Tokens in order to ignore both rules for that card’s placement. Do this every time you would place a card that would break one or both rules.

This means that placing 3 cards in a turn would cost 5 money. You cannot place more than 3 cards in one turn.

When you complete a building, you may also add a Tourist or Inhabitant Card! Tourists generally score points for the building you’ve assigned them to, whereas Inhabitants give you points for the state of the town. You cannot have more than one of each type of Inhabitant. The locals are unique, as far as you’re concerned. 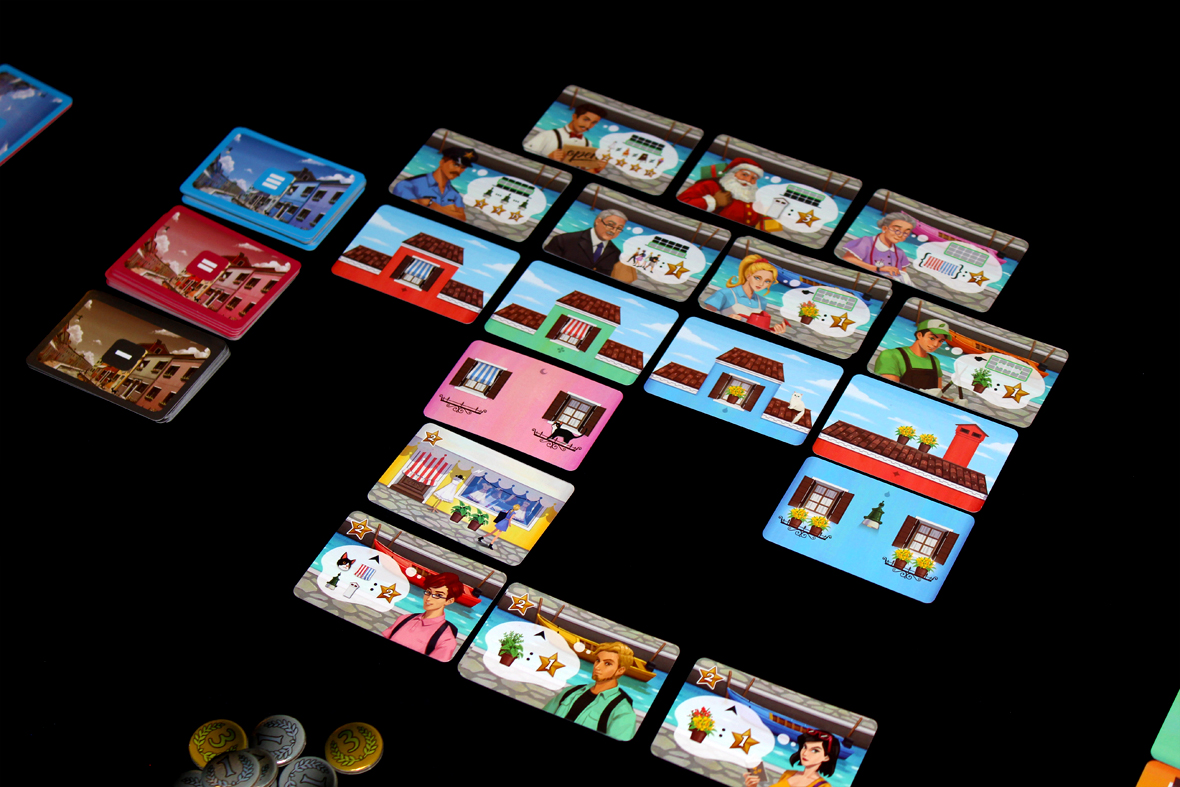 Once every player has had a chance to play, pass the Starting Player Token one player to the left. If you’re playing a solo or two-player game, remove the rightmost card from every row from the game. At all player counts, you then slide the cards in the Floor Supply to the right and then refill the empty spots. Play continues with the new Starting Player.

If you’re playing a solo game, also remove one Character Card from the game.

Once a player builds their 15 Floor Card (or if you run out of Character Cards in the solo game), the game is in its final round. At the end of the round, the game ends. Score each of your Character Cards, add in the points on your Shop Cards, and don’t forget to count the points on your remaining Regulatory Bonus Cards. If you have the most (or are tied for the most) closed windows, lose one point for each closed window.

The major differences are just the competition around certain types of cards at certain player counts. There are only four cards of each color, so, if you get two of a color, that means that one player is not going to be able to finish their house (if everyone split the other cards of that color) without spending one of their Regulation tokens. Beyond that, the Tourists and Inhabitants scale nicely, so I’m not terribly concerned about that. I like the two-player and solo modes for allowing the cards to churn more quickly (by discarding , though I fear with the solo mode that like Ganz Schon Clever, you can kind of figure out what you need to get an optimal score and generally work backwards, with enough effort. I’d say my personal pick for this is two players. 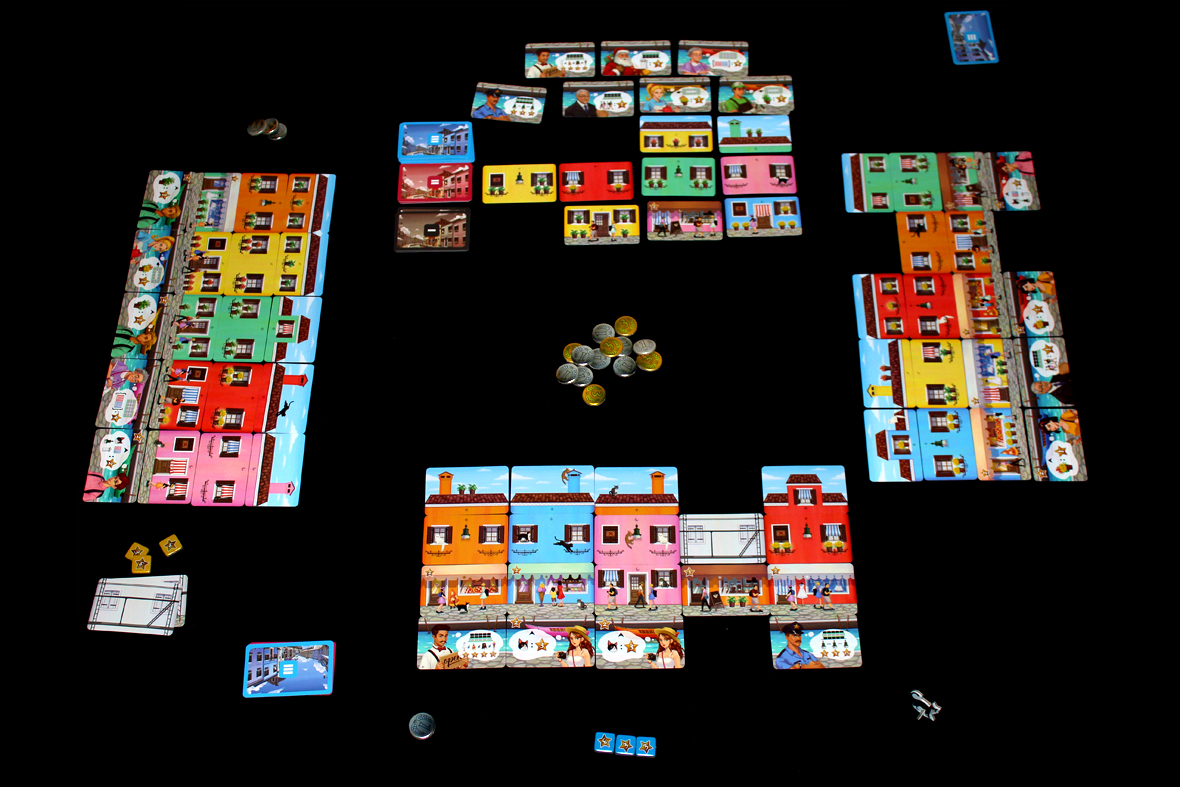 Overall, Walking in Burano is great! I love how enthusiastic the game is about its own theme, and I think the art really pulls its weight in that aspect. It’s more than bright; it’s excited and upbeat. Everyone’s smiling, all the people and cats are happy to be there, and that’s just a great way for a game to be. It’s pleasant to play, too; there’s almost no take-that (beyond taking a card that someone else wanted before they could get it) and at two players it’s not terribly difficult to get what you need. It seems to be a game with a lot of potential that reminds me a bit of Coloretto, but that might just be that cards are in columns (which hardly counts). Either way, it’s a solid gateway game and I’ve been showing it to other people with a fair bit of success. If you’re looking for a quick and beautiful game or you just love painting houses, Walking in Burano has been a lot of fun, and I’d recommend it!