Full disclosure: A review copy of Haven was provided by Red Raven Games.

Whew. Last reviews of the year! We made it; we survived. I will likely be structuring my review cycle a bit better in the upcoming year to avoid potential burnout (and to give myself a break to do more Lifestyle Things; would probably prefer not to hit 200 reviews / year). I’ll have more to say on that in January. Until that point, let’s take a look at Haven, from Red Raven Games!

In Haven, the Guardian has slept for … a while. Since then, the Forest has tried to protect itself from interlopers. Unfortunately, some new folks have shown up and are definitely looking like they’re gonna interlope. You’ll need to leverage Leaf, Water, and Stone Lore in order to summon elementals to help you defeat (or control) your opponents. Thankfully, your Seekers will be able to help you, as long as you don’t get too greedy. Will you be able to push your faction to victory?

Easiest first thing to do is set out the game board:

You should randomly place the Elemental Standees on it so that they’re on a Shrine space (one of the green spots) on a path that’s connected to the edge of the board (there are 6 such spaces):

You can also place the Victory Point cards on top of the board:

Set aside the Shrine Tokens:

They’re double-sided. You can set aside the Haven Tokens, too, or give them to each player: 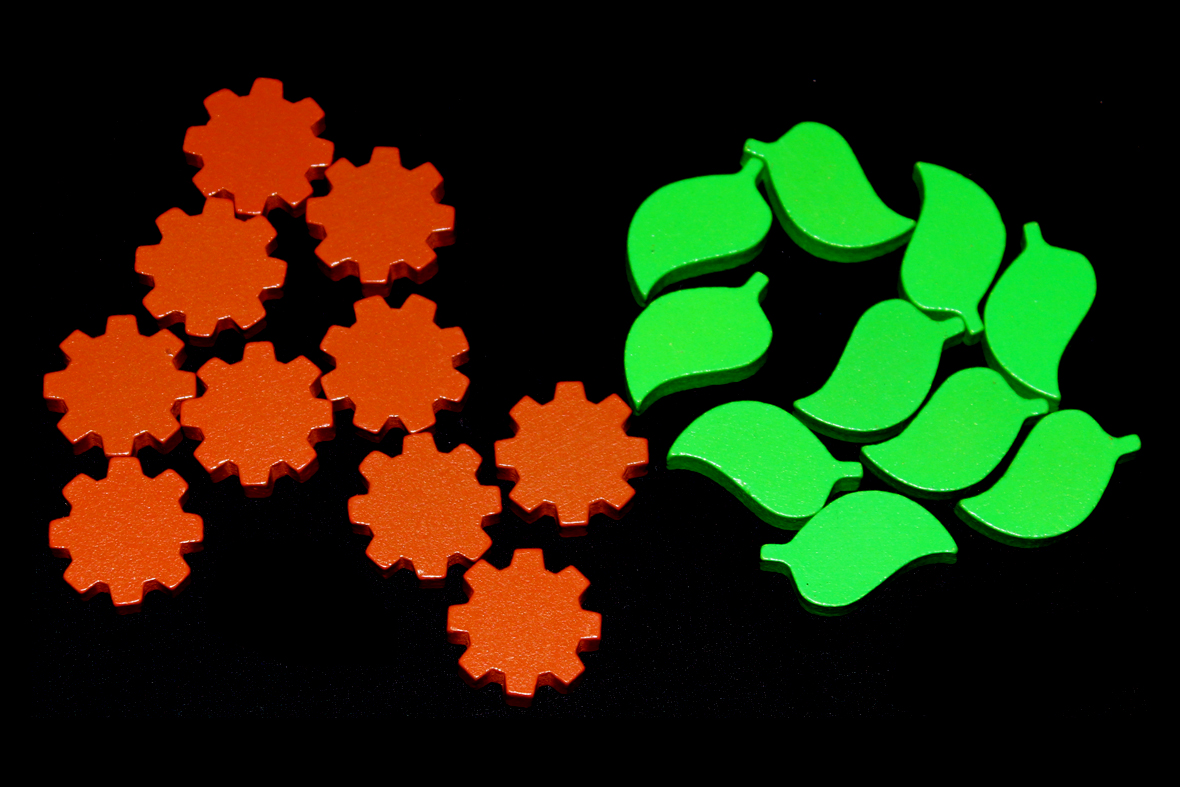 In order for giving them to each player to make sense, you should probably have each player choose to be the City or the Forest, so do that, and then give them the Seeker, Offering, and Lore Power cards (respectively) for each group.

Have them shuffle their Seekers and place the deck face-down on its space on the board:

Have them remove one of each of the three primary types of Offerings from the deck (Stone, Leaf, Water), set those aside as their starting hand, and then shuffle the remainder, placing it, as you’d guess, face-down on its space on the board: 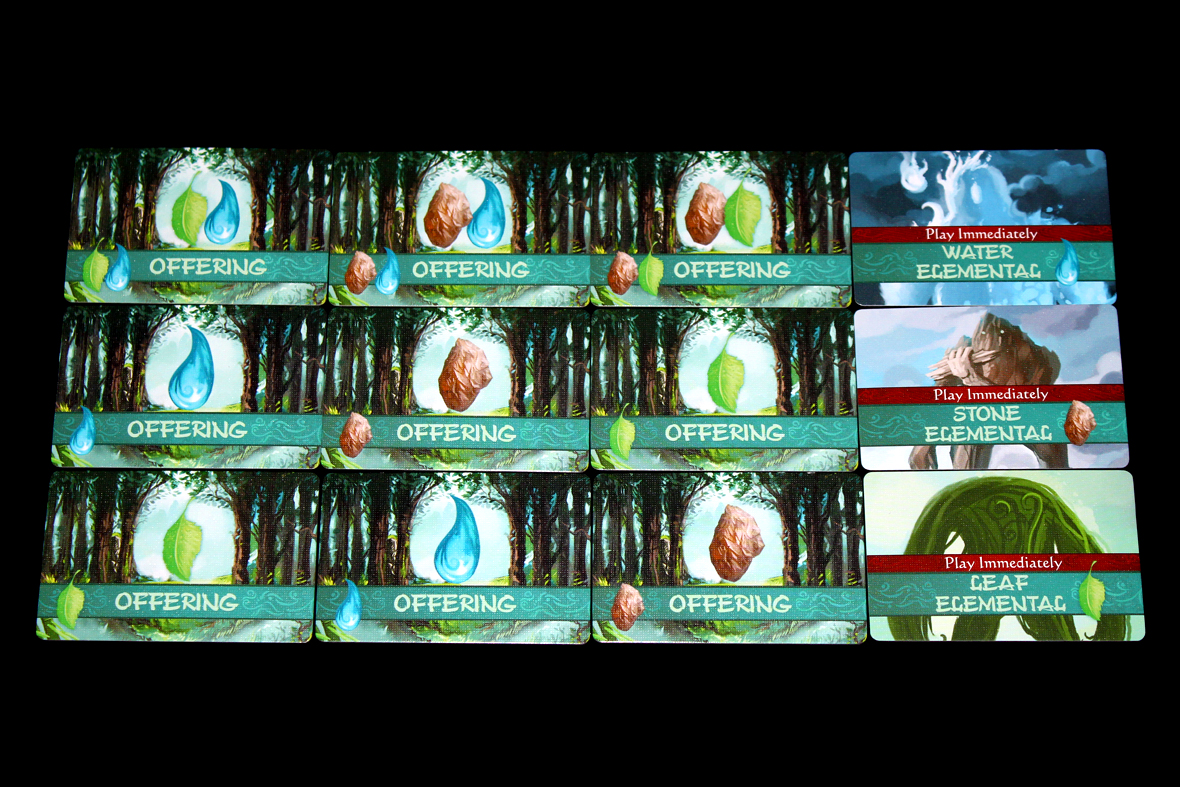 Take the Lore Powers cards; you can remove three from the game, if you want? I’ve never done it, but I imagine once you’ve Played Enough that might be a decent strategy move. Both players should shuffle the Lore Powers and place the decks face-down on their spaces on the board:

If you choose to use the Hidden Artifact cards, shuffle them and place them face-down (or face-up, if you want; that’s also a variant) below the 0 – 4 spaces on the bottom of the board (text should be visible if the card is face-up).

There will be one left over, so you can put it into the box or cast it into the darkness or whatever you do with your games. Not here to judge. Shuffle the three sets of Lore tokens and place them vertically face-down between the two players:

You can flip the top one face-up. Each player should now draw one Seeker, and the Forest player should also draw one Lore Power card. Once you’ve done that you’re all ready to start! The City player always goes first.

Also, if you happen to get your hands on some Red Raven promos, you might find these:

Give each player one to start, and have them keep them face-down.

So, the game is played over a sequence of rounds as players vie to take shrines guarded by Elementals. When enough shrines are taken, the Havens they surround become controlled by a player, which may earn them more points later on. You can also compete on Lore, trying to summon the elementals themselves to your aid. The player with the most points at the end of the game wins!

A game takes place over several turns. I’ll outline them below.

On your turn, you’ll perform two actions (except for the City’s first turn; they only get one action):

You cannot play Offerings during this step.

One at a time, draw cards from any of the three decks. Slight caveat: if you have no Offering cards in your hand, you must draw at least one Offering card. If you draw an Elemental from the Offering deck, place it on your side of its matching Lore token, face-up, and then draw another Offering to replace it.

Here’s the fun one. If, at any point, you have three Offering cards (total) on either side of a Lore token, it’s time to resolve them. This includes Elementals, so, be careful. If multiple Lore tokens need resolved, go from left-to-right (from the active player’s perspective). If nothing needs resolved, skip this whole bit.

Once all Lore Tokens are resolved, move on to the next step.

Place one of your Offering Cards on your side of a Lore token of your choice. It must, as you might guess, match that Lore type, but if it has multiple Lore types on it you can choose either one.

You must play an Offering, so, have fun with that.

First, you should discard down to 7 cards. I forget this all the time, so make sure you don’t.

Now, if any Elementals have left the board or an entire stack of Lore tokens has been depleted, the game ends. Otherwise, it’s the next player’s turn!

Awesome, the game’s over, so, now do the following:

There are a bunch of Variants, but I’ll talk about a few I like a lot:

So, those artifacts I mentioned earlier in the game? Well, now you can obtain them! If you ever have 3 matching Seekers in play at 3 different Lore tokens, you can reveal all three of them to claim the Artifact matching the Seekers’ Lore Value. Your Seekers aren’t discarded or anything. Each card is worth +1 VP at the end of the game.

Haven Master (I call this Connected Havens by mistake; whoops)

When you score at the end of the game, award the Haven Guardian VP card to the player with the most connected Havens (they have to share an edge). If there’s a tie, nobody gets it.

So for this one, instead of moving an Elemental from the board, you can place it (once there’s no where else to go) on an already-claimed Shrine and fight for it again. If you’re moving an Elemental away from a Shrine that was already claimed, then the game ends. So you can get up to three Bonus Fights if you want a slightly longer game, and the Havens could switch control too!

Overall, I like Haven quite a bit! There’s an interesting tension when you’re trying to figure out whether your opponent is trying to beat you on Lore or Combat (or both), and I think that drives a lot of the game, which I enjoy. The fact that your decks are essentially the same (one Lore Power difference) and that ties break differently for you is a nice touch, I think. It’s only slightly asymmetric, so it’s not hard to learn the Forest once you’ve learned the City; they play the same. You just might have slightly different incentives as a Forest player than a City player, which makes the strategies change slightly to follow. It’s obviously complemented by more fantastic art from Laukat, which I appreciate, as well; I think the greens here are a really nice move for him and I’d be interested in seeing more games with similar color schemes in the future. All that in a ~30 minute time frame is pretty good, for me, all things considered. If you’re looking for a bit of complex gameplay that’s not going to break the bank, mentally, or you want a challenging game that’s ever-so-slightly asymmetric, I’d recommend taking Haven for a spin! I’ve enjoyed it.