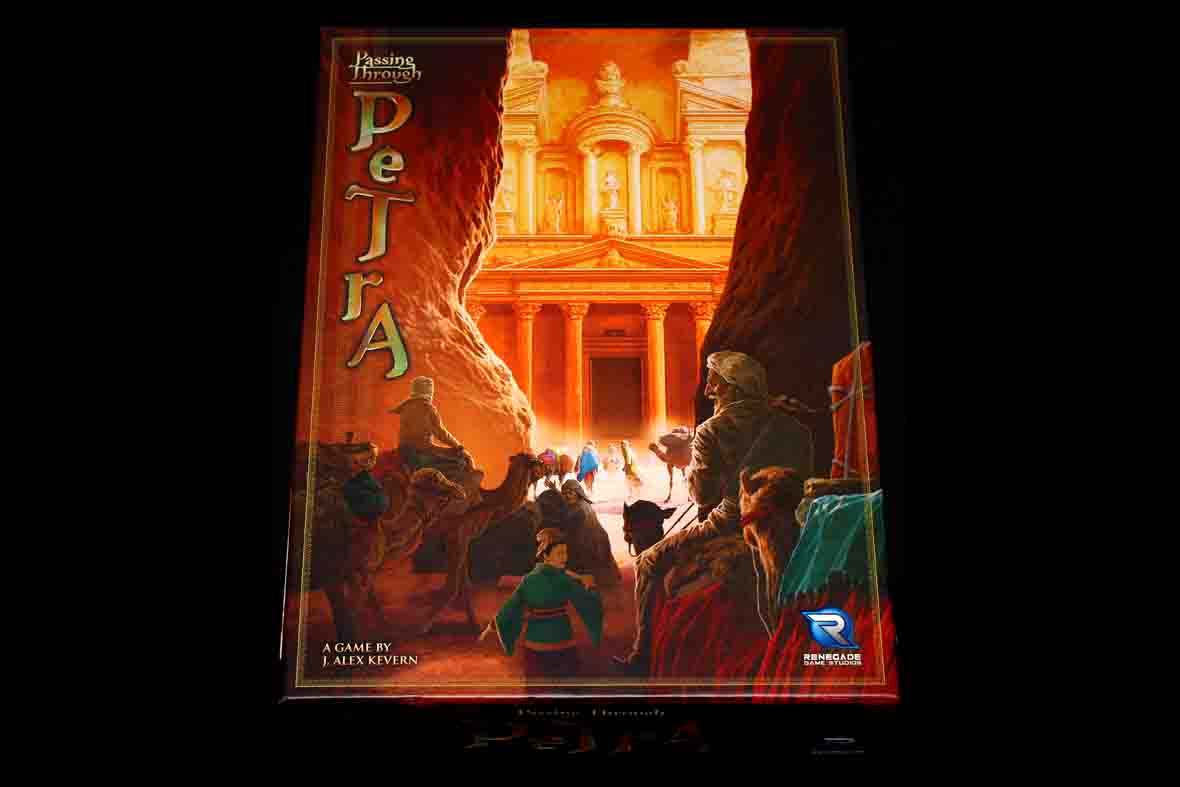 Full disclosure: A review copy of Passing Through Petra was provided by Renegade Game Studios.

Alright, 2018 is almost over, so it’s time to finish the year out strong. Next year’s going to be a wild ride (have several games from PSI and Iello to check out, which is exciting), but before we can get to that we have another game from Renegade for y’all. This week is Passing Through Petra, the next game from J. Alex Kevern, designer of Prowler’s Passage, Sentient, and others.

In Passing Through Petra, you track the caravans as they make their way through the canyon to trade. As you moderate these interactions, your influence grows around town and you seek to capitalize on this to establish yourself. Will you be able to turn these transactions into social capital? Or will you miss out on your opportunity to become a powerful leader?

Alright, first thing is you gotta set up the board:

You’ll notice it has a bunch of holes in it; perfect fits for these Canyon pieces: 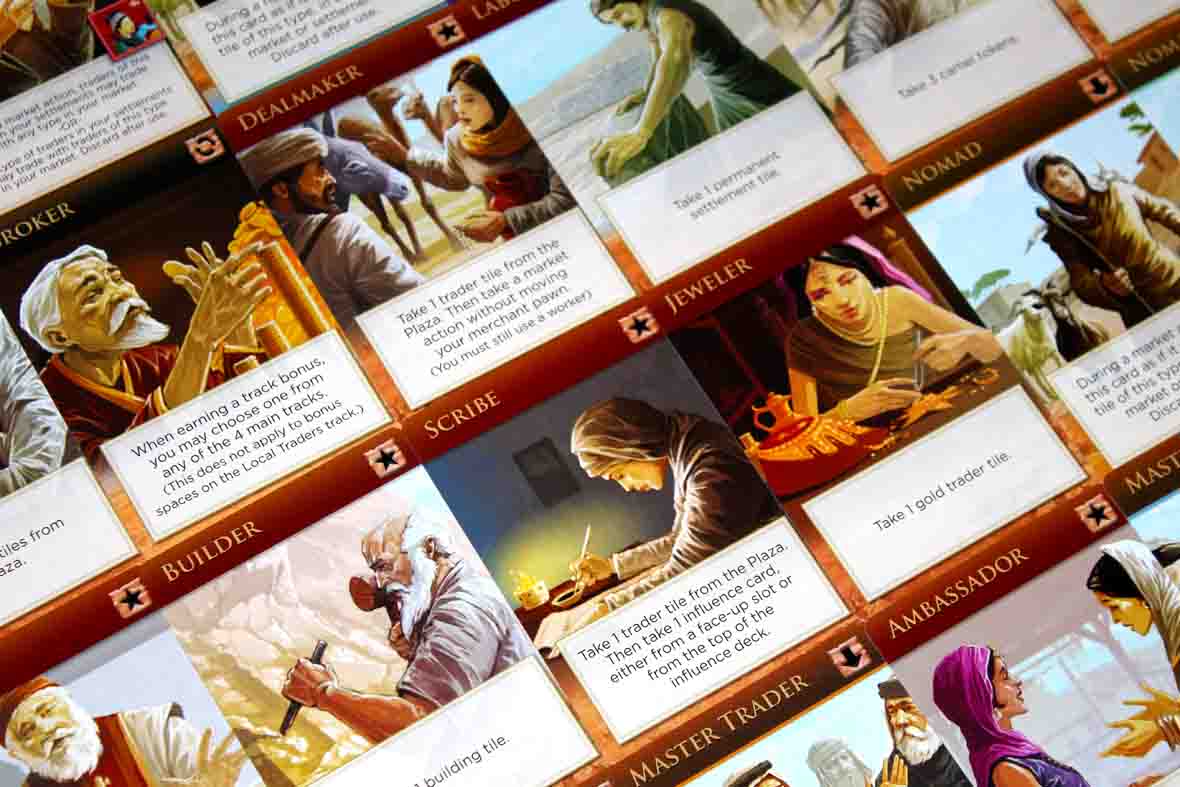 Place one on each of the spaces on the edge of the board. Shuffle the Influence Cards:

Place one on each of the spaces on the other side of the board. There are a few things you don’t especially need right now, but should set aside, like the Market Extension pieces: 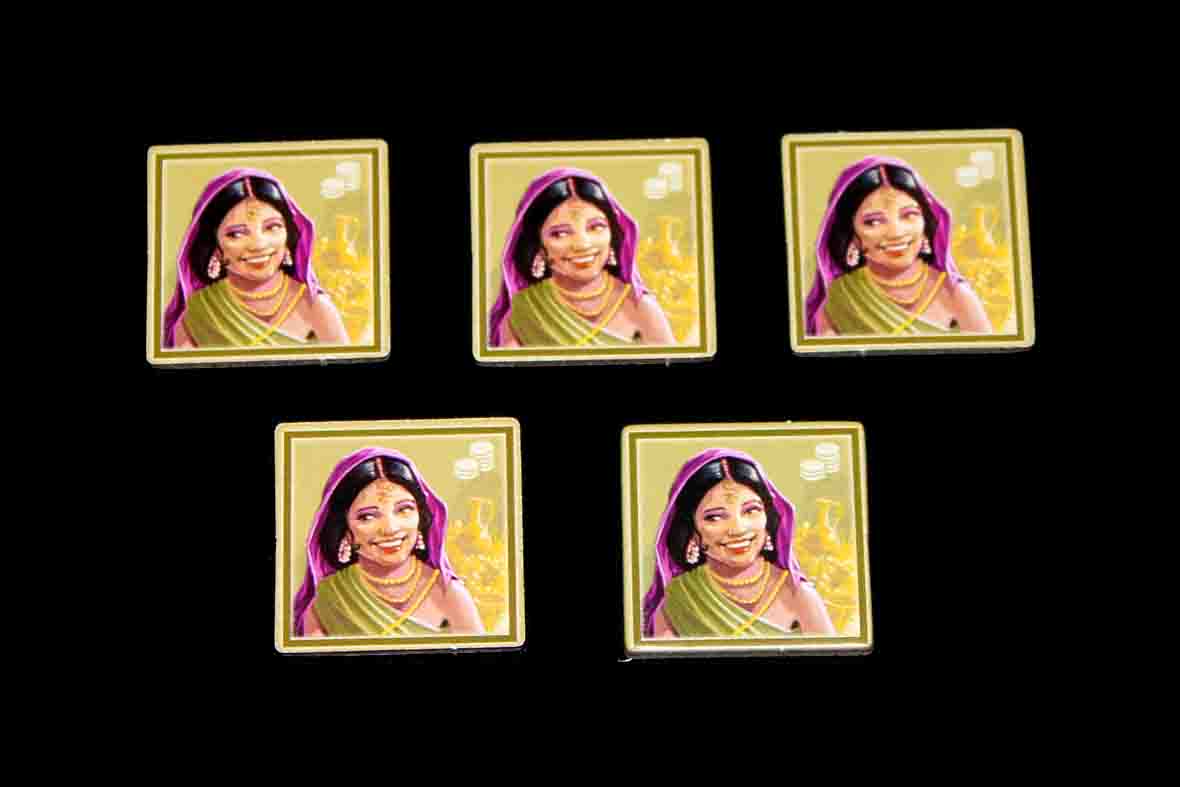 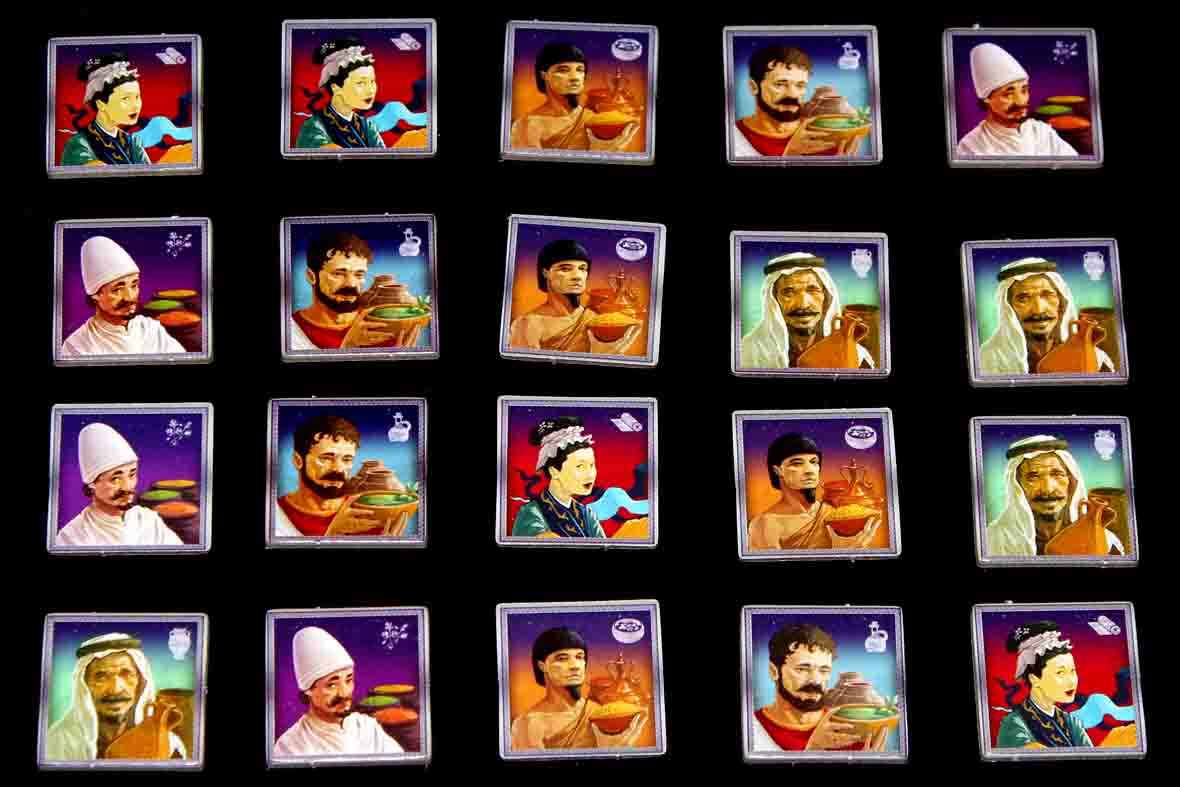 And the Building tiles: 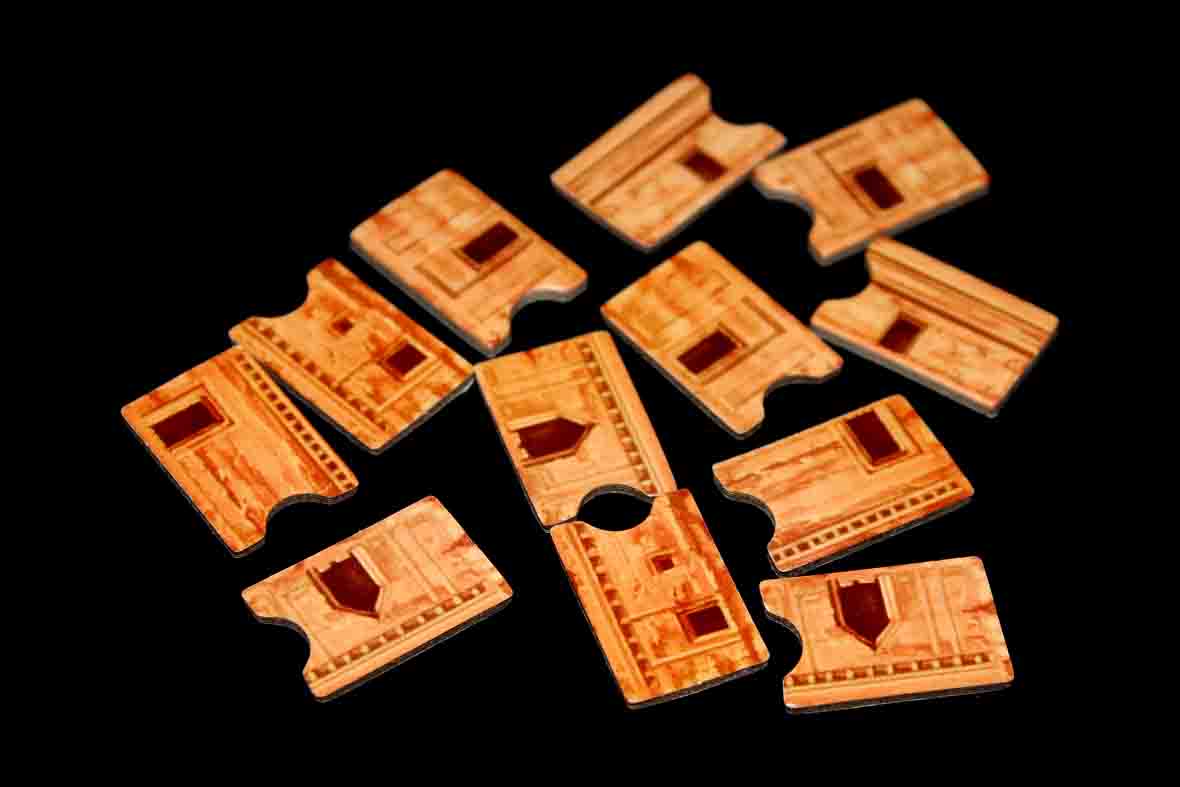 You can then give each player a player board: 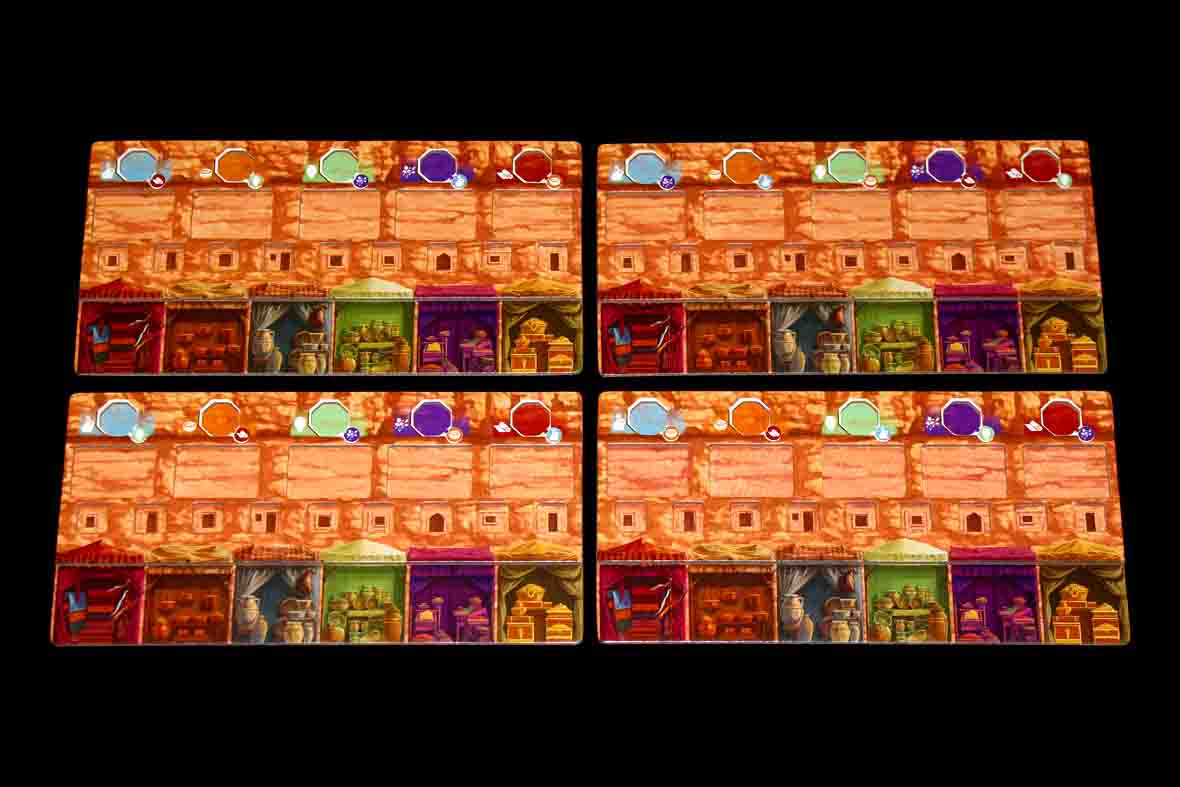 Do so randomly; similar to Let’s Make a Bus Route, they are subtly different. Have them place the nine influence cubes of their color in the recessed square spots on their player board:

Give each player their Merchant Pawns:

Have them put those in the center of the city grid. Now place a marker disc of theirs blank-side-up on the space marked with an X on each of the 5 influence tracks:

And take your 5 workers, placing them by your board:

Give each player camels in turn order: First player gets 1, second gets 2, and so on.

Now for the Trader Tiles. They look very similar to the Permanent Settlement Tiles, but more pronounced in each of their colors. Each player takes 6 randomly from the included bag:

And places them on their player board (at the bottom, forming their Market). The only rule here is that you cannot have more than three of one kind. Place them in the order you drew them; no organizing after the fact.

Now, draw four more and put them in columns above your player board next to the circle with their color + symbol. These are your Settlements. You may not have more than two of one color, here. 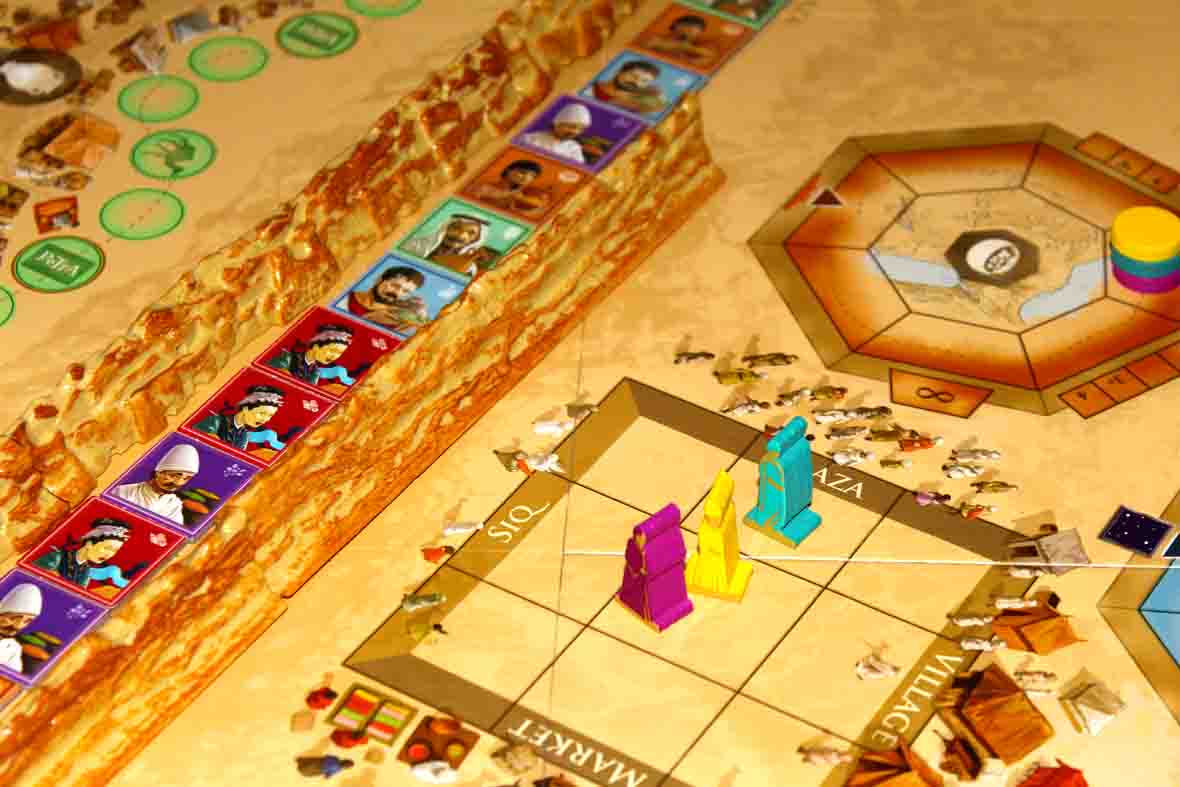 So Passing Through Petra is an abstract strategy game about placing influence cubes on various influence tracks around the board. The first player to place all nine of their cubes wins!

On your turn, you may move your Merchant Pawn one space in any of the four directions (provided you can move in that direction; if you’re already on the edge of the board, you cannot move in that direction). You then take the action associated with the edge that you just moved towards. I’ll talk about each in their own section, so let’s dive in to that. 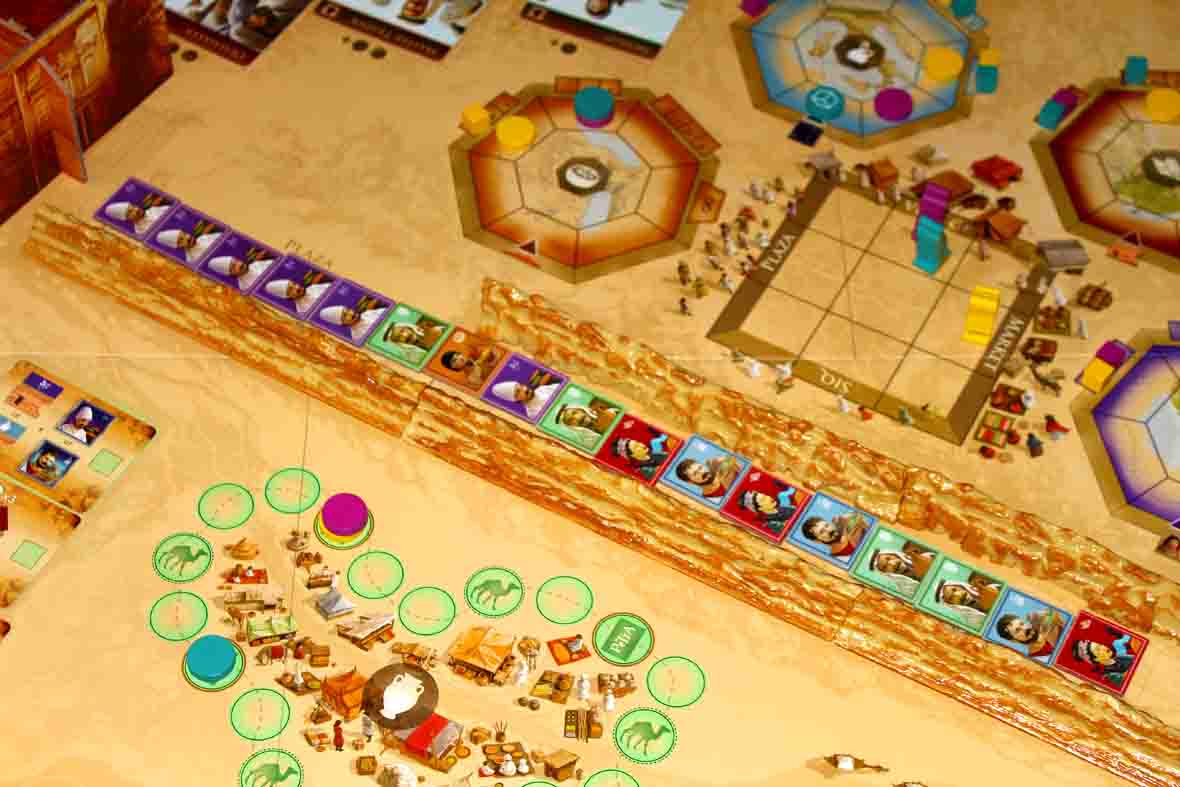 So, the part of the board’s canyon with only one side is known as the Plaza. When you take this action, you may take two Trader Tiles from the Plaza and slide them into your board’s Market row, displacing two from that Market Row. The displaced ones then get placed into your Settlements, above your player board.

Note that you may place them into your Market row in any order you’d like.

The part of the board’s canyon with two sides blocked is the Siq. When you take the Siq action, you may pull any one Trader Tile from the Siq (not the Plaza) and slide it into your board’s Market row, displacing a tile that’s already in your Market row. It then goes into your Settlements, just like it would for the Plaza action.

This one’s a bit of a doozy. So, for this one choose one of your Settlements with no worker currently in it, and then look at your player board to see what color / icon that Settlement is paired with. For each tile in your Market of the Paired Color, you gain one influence on the Settlement Color’s track per tile in your Settlement. Basically, if I had 3 Blue and 4 Purple, and they were paired, I’d get 12 influence on the Blue track. Move your token along until you pass the bonus space, and then flip it over but don’t stop moving. Once you pass or land on a space with an empty square above it (relative to your player count), add one of your influence cubes to that space and then flip your marker disc back over to the blank side.

Every time you pass the bonus space you’ll flip over to the cube side, but you can only collect the bonus once per turn. You may, given how much influence you gain in one turn, pass the bonus space multiple times and place multiple influence cubes, but again, really emphasizing you can only gain the bonus for that track once per turn. Green has no bonuses; you just gain a camel token or an Influence Card whenever you pass or land on that space. When you gain an Influence Card, you may take one of the face-up ones or draw a random one from the deck.

Let’s talk about the other bonuses:

Once you finish, discard all the non-permanent Trader Tiles from your Settlement place one of your workers in that Settlement’s spot on your player board; again, you cannot use a Market Action for a space that has a worker in it.

So, on your turn you may do a few other things before it ends:

Beyond that, just take turns until one player wins!

The major difference is that it’s much easier to go deep on one influence track at higher player counts, as there are more open spots. Thankfully, it’s also much easier to get blocked doing that, as you have three people who can pull tiles you want before you get another turn at four players, so that stymies that, somewhat. Beyond that, the time commitment of the game will increase at higher player counts, as there’s no real scaling between various player counts. To that end, I probably like this best at two or three, but there’s nothing wrong with four players; it just takes a lot longer.

Overall, I think Passing Through Petra is excellent! It’s definitely going to be sticking around for a bit, but I like the art style and the abstract gameplay, a lot. As usual, I complain a bit about games that are just “do the same thing, but with more downtime” as the player counts increase, but I’m resistant to call that a gameplay Con because there’s also some engine-building components in this game as you start getting certain bonuses, and requiring players to drop fewer cubes just means you won’t see those engines ever hit fruition, which is a bummer, so I’m mostly fine with it. It seems like the kind of game that’s ripe for some expansion content, as well, as you could add more Villager or Influence cards as a quick adrenaline shot for the game or something else that could be interesting. Either way, it’s a neat abstract strategy game, and I love abstract strategy games, so if you’re looking for a fun new one to check out, I’d recommend Passing Through Petra pretty highly!