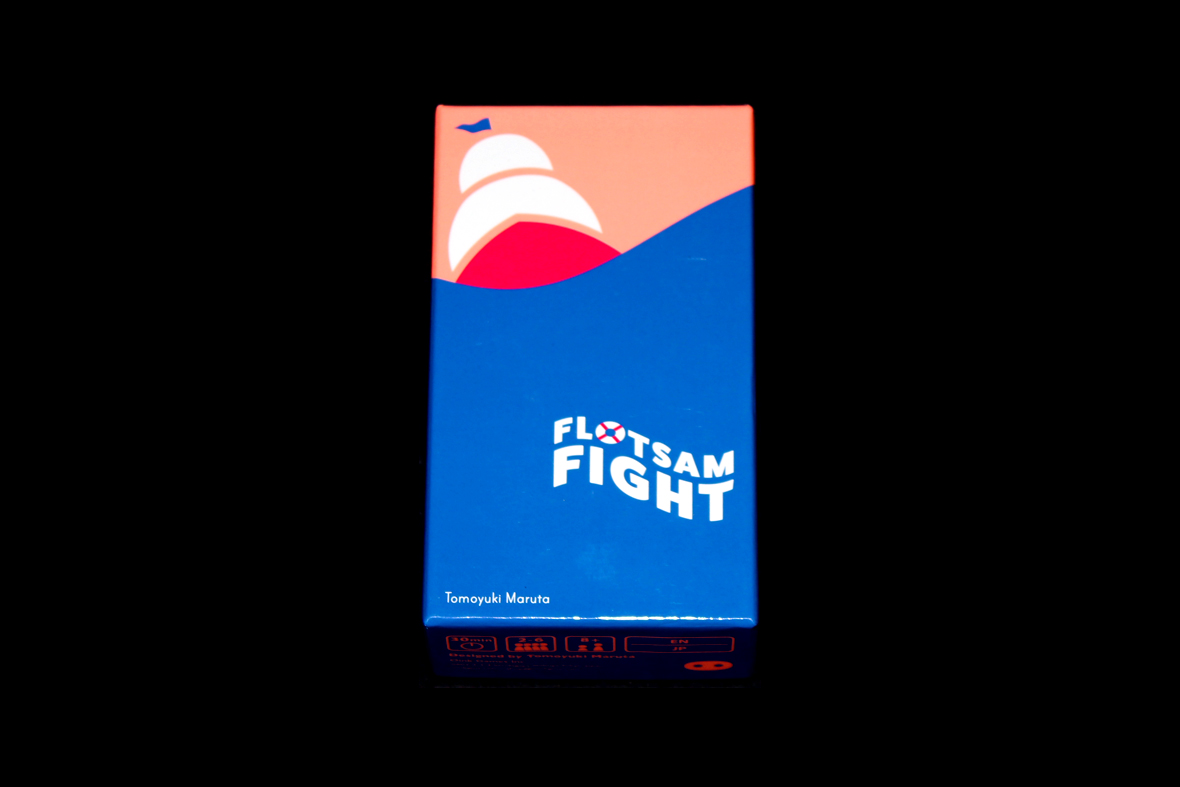 Two more this month, hopefully; I’m really pulling to try and get a review of Moneybags done by the month’s end and I think I can do it. VOID probably isn’t happening because that’s sort of like reviewing a concept. It’s a neat concept, though? I’ll try it eventually. Anyways, let’s talk Flotsam Fight.

In Flotsam Fight you are adventurers sharing a single boat (sort of the aftermath of Deep Sea Adventure, if you want to think about the Oink Games sharing a continuity). You’ve collected treasure, but you didn’t plan for the storm, so your boat is unfortunately sinking. You’d love to get all your treasure off the ship, but there’s only so much room in the lifeboats. Also, maybe the other people want to be on the lifeboats? That seems like a them problem, not a you problem. Either way, you’ll have to be crafty if you want to make it back with all your loot.

Pretty much none. Bunch of cards; shuffle them: 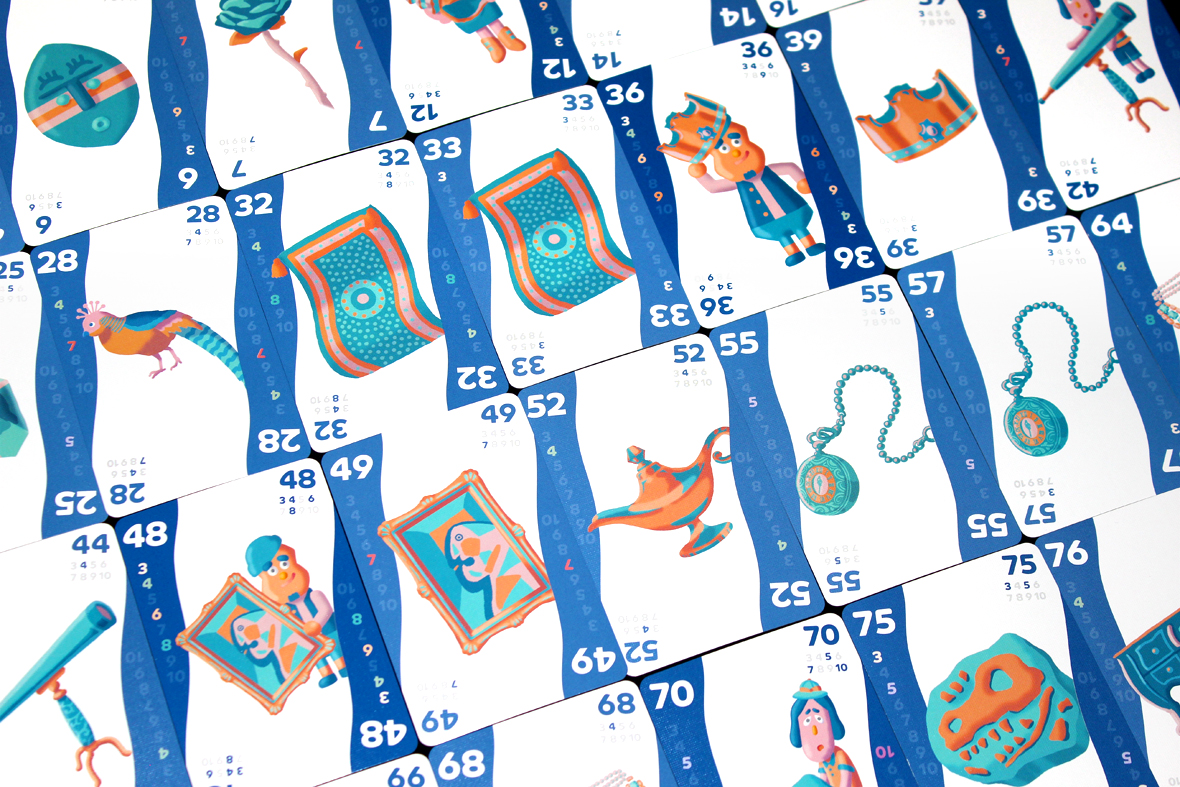 Set out the lifeboats: 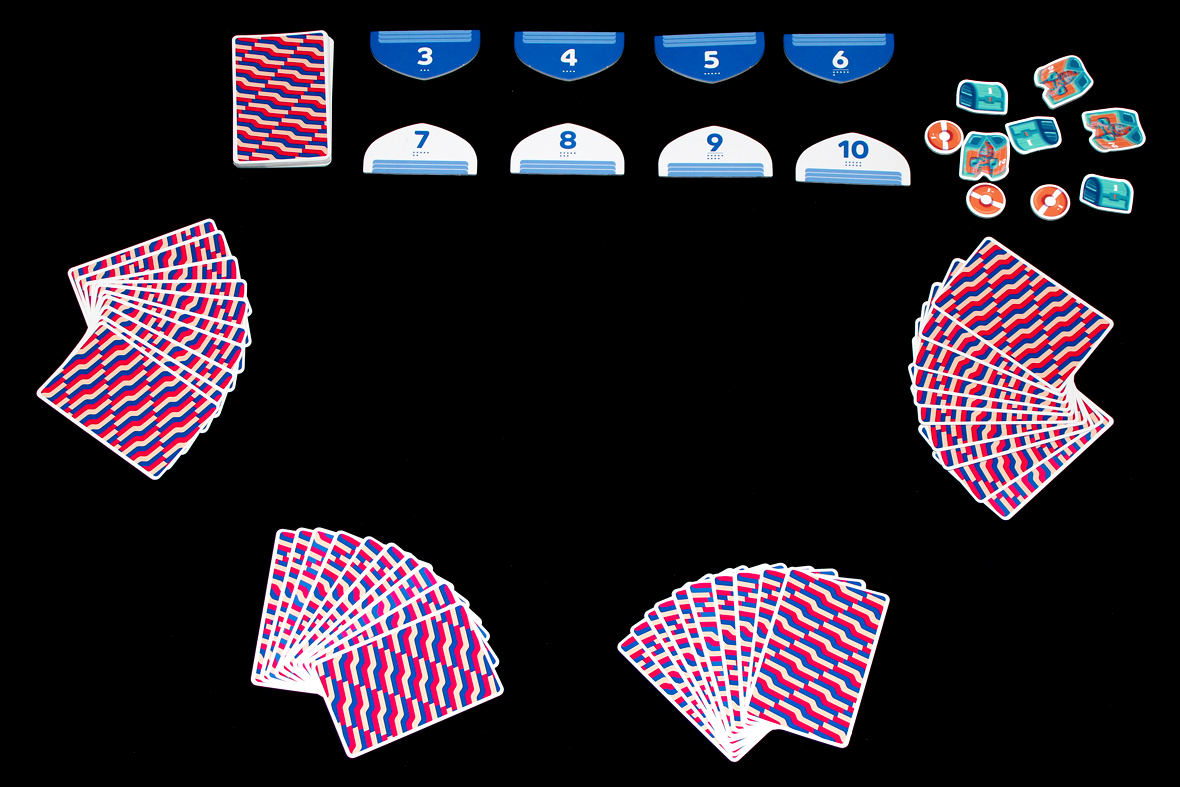 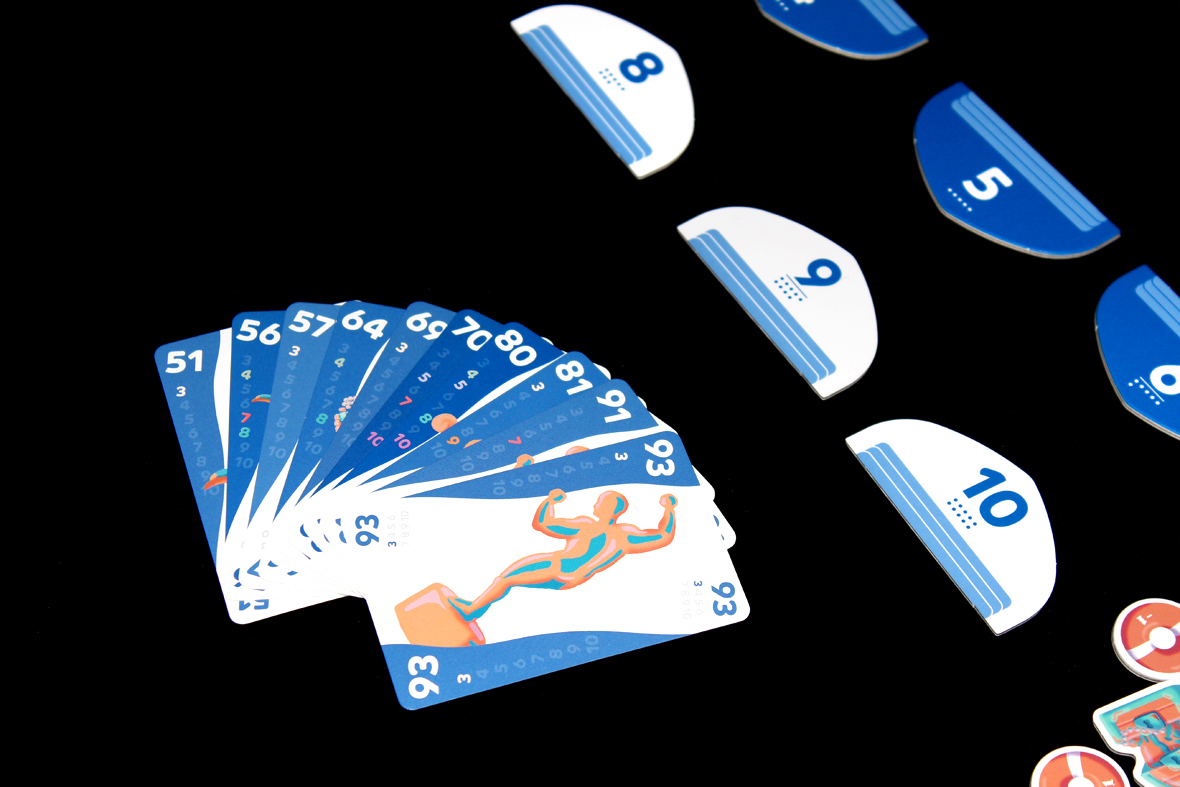 On your turn, it’s pretty simple: you can add a card to a lifeboat or pass. If you pass, you’re out until everyone else (except for one person) passes. You can pass even when you could play a card; strategy!

Playing a card to a lifeboat just requires you to check which lifeboat it can be played in (a card can be played in a lifeboat if that lifeboat’s number is one of its factors, if you’re trying to teach math. I only realized this last night). The catch is that you can only use a number of lifeboats equal to the number of players. If you’re playing a four-player game, once four lifeboats have cards in them, then you have to stick to those four. The second catch is that the numbers must always be increasing. Low numbers are going to make life challenging. 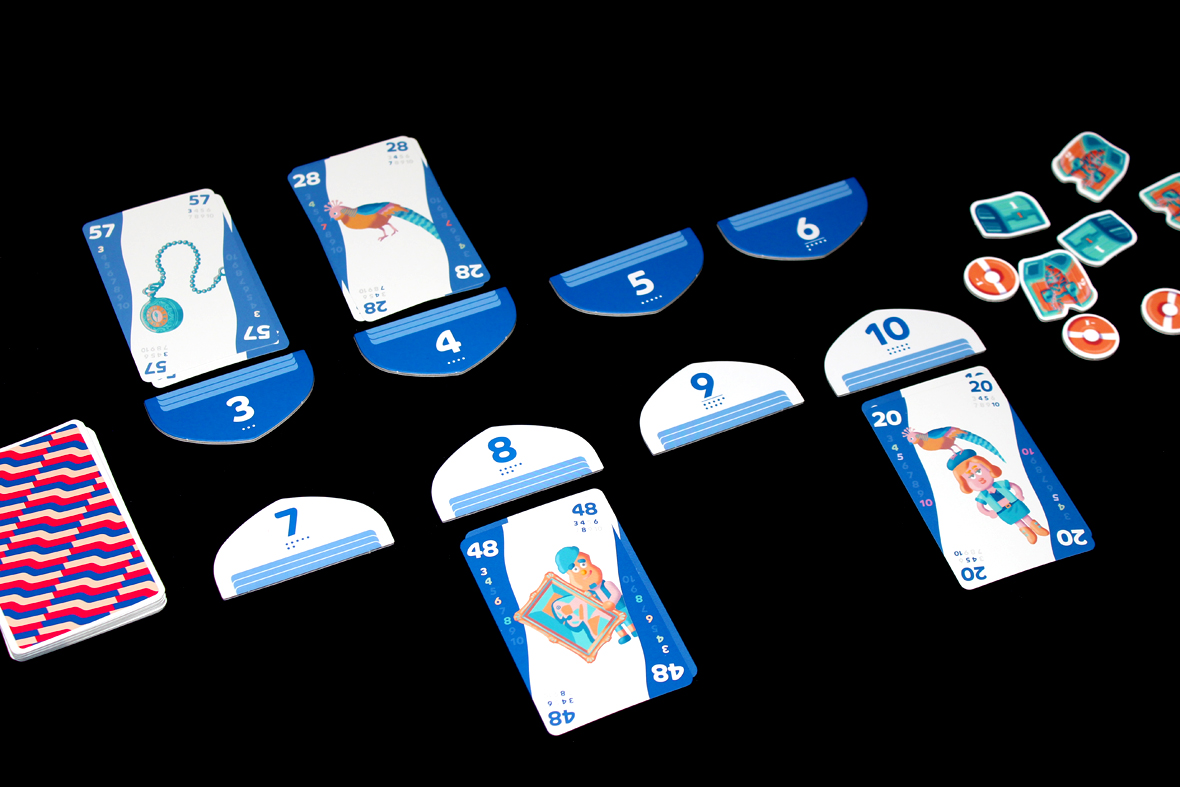 If all players but one pass, that player may still play a card if and only if that card is the last card in their hand. Otherwise, all players now have to check for a penalty: if they have only one card in hand, they must draw two new cards. Discard all the cards from the lifeboats and play continues from the last player to play a card.

The round ends when one player has played their last card. That player takes two points, and in typical Oink fashion the second-place player takes 1 point and the last-place player takes -1 point. The interesting thing is that placement isn’t based on how many cards you have in your hand; it’s based on the card’s value. Take the highest-value card in your hand and compare it to the other players. Of those cards, the player with the lowest-value card gets second place, second-lowest value gets third, and so on. 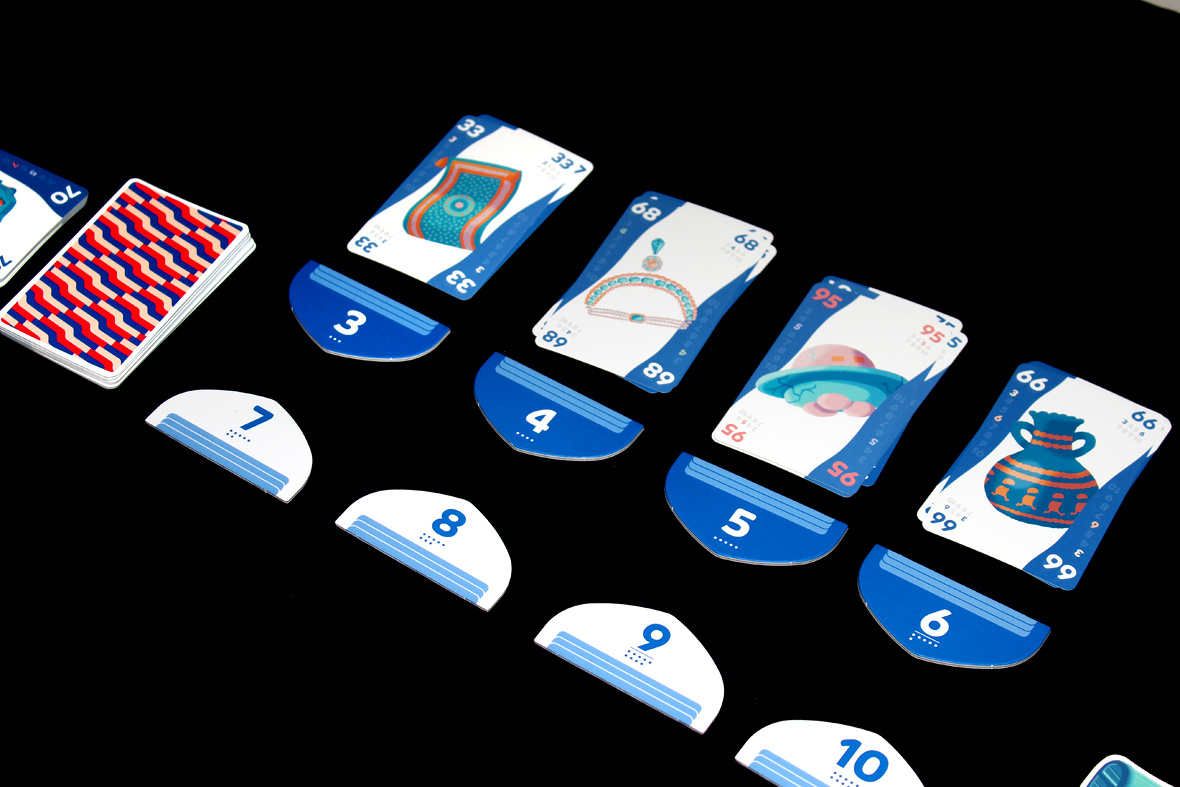 Continue until three rounds have been played; the player with the highest score wins Flotsam Fight!

If you’d like, you can play this with a drafting variant; rather than dealing the initial cards randomly, you can draft them. Not my personal cup of tea, since then it’s kind of a memory game of what everyone has, but you might enjoy it.

The major difference is similar to the game Maskmen; at two players, it’s a very different game, since so few lifeboats are in play. You need to adjust your strategy a bit, but it’s a devious little puzzle at that count and play goes very quickly. We stopped using score tokens, honestly; we just call each round a mini-game and play until we’re done. It’s simpler, in my opinion.

At higher player counts, there’s many more options around where to play just by virtue of more lifeboats being in play. This lets you duck under your opponents, provided they’re not leading with cards that are out of your playable range (which is unlikely). Either way, you’re guaranteed to be able to play at least one card in a given round, so don’t despair too much. 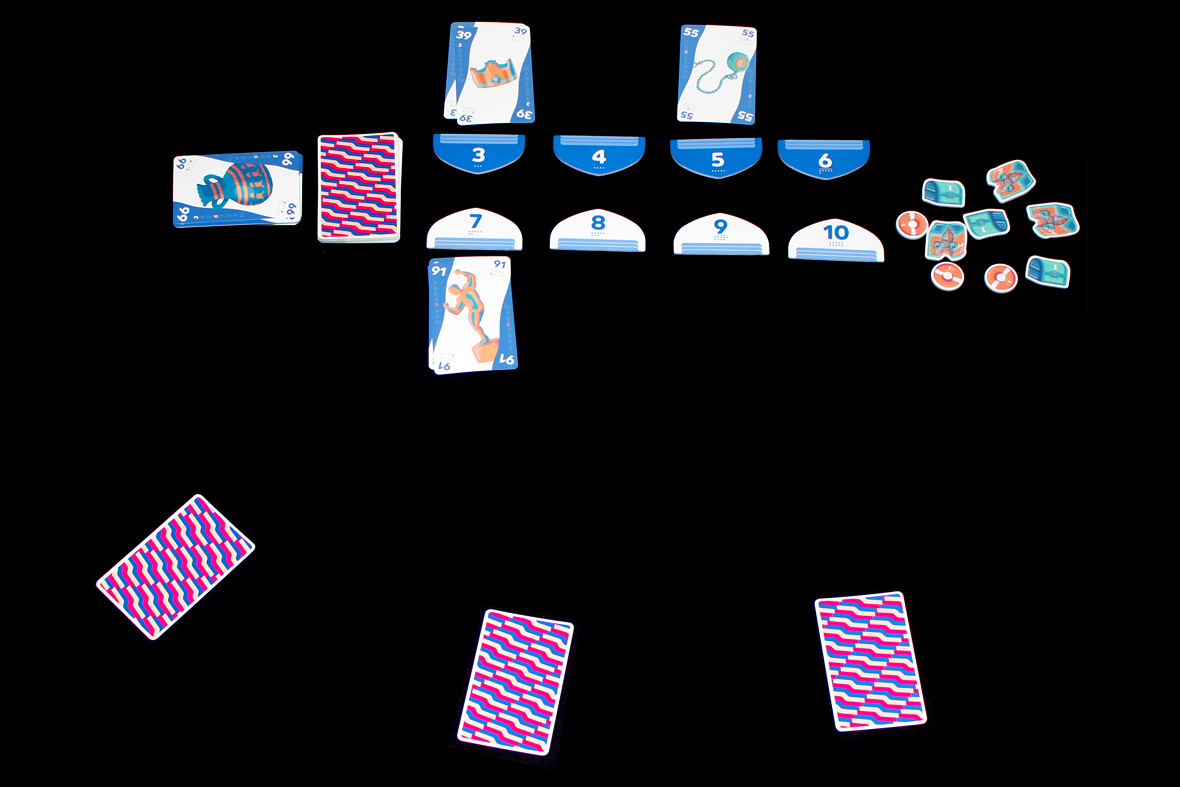 Overall, I quite enjoy Flotsam Fight! As with all Oink Games, I appreciate that it’s pretty simple to pick up and easy to take just about anywhere; you could put a bunch of these in a small bag and easily have enough games to last you a while (OinkCon, anyone?). What makes this one interesting is the ladder-climbing mechanic that’s much more dependent on math and probability than, say, Maskmen. Similar to what I mentioned last week about the relationship between Nine Tiles and Zogen, this pair of games shares a mechanic in common but executes it very differently, making for a game that’s a great follow-up for fans of the other. (I suppose Deep Sea Adventure and The Pyramid’s Deadline also do this.) Either way, it’s a fun little game that I quite enjoy, and if you’re looking for a card game that’s good for groups and solid with pairs, Flotsam Fight is a lot of fun!