Full disclosure: A review copy of KOI was provided by Publisher Services Inc..

So I got a box from PSI a while back that had all sorts of games in it, including games that are wildly outside of my normal play scope (4+ player games, unfortunately, never really get played). I had already written up Mini DiverCity in previous months, so I’ve been gradually tackling games in this box. KOI is an absolutely stunning game, so I figured, why not rattle this one off next?

In KOI, you’re … fish, trying to become dragons, as you do. On your daily, you kind of want to eat dragonflies, maybe slurp up a frog, do some sick jumps, and avoid bad weather. These are all things that you very much enjoy, along with batching your movement so that you execute several moves one after the other in a near-programmatic bliss. You’re a weird fish. But either way, your opponents want to monch your food, and you can’t let that happen. Will you manage to become a big fish in a small pond?

First thing’s first, set out the board:

It’s double-sided, depending on your player count. You’ve got a bunch of tokens to set aside, as well. There are a number of different starting configurations for the boards, so I won’t get into the specifics of each; the 3-player one is included in my review. You might even try making your own? Either way, place relevant Lily Pads: 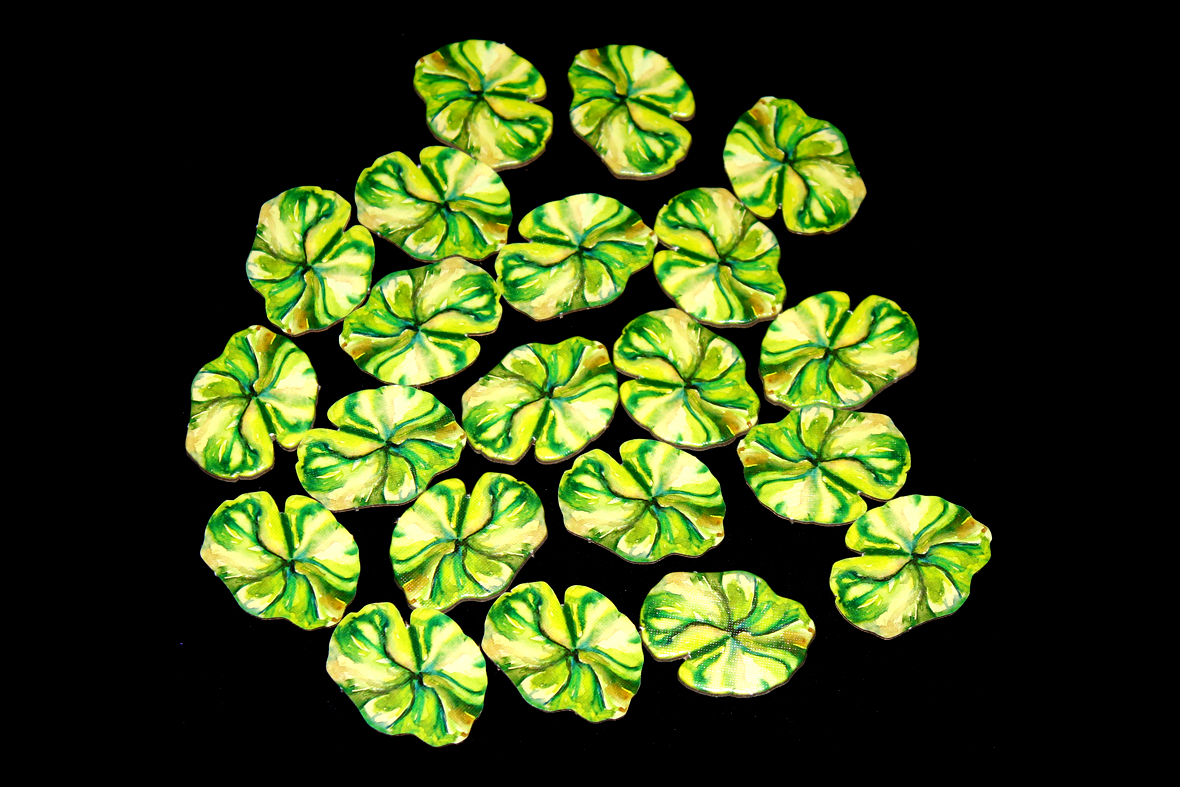 And place a Dragonfly on each of the Lily Pads: 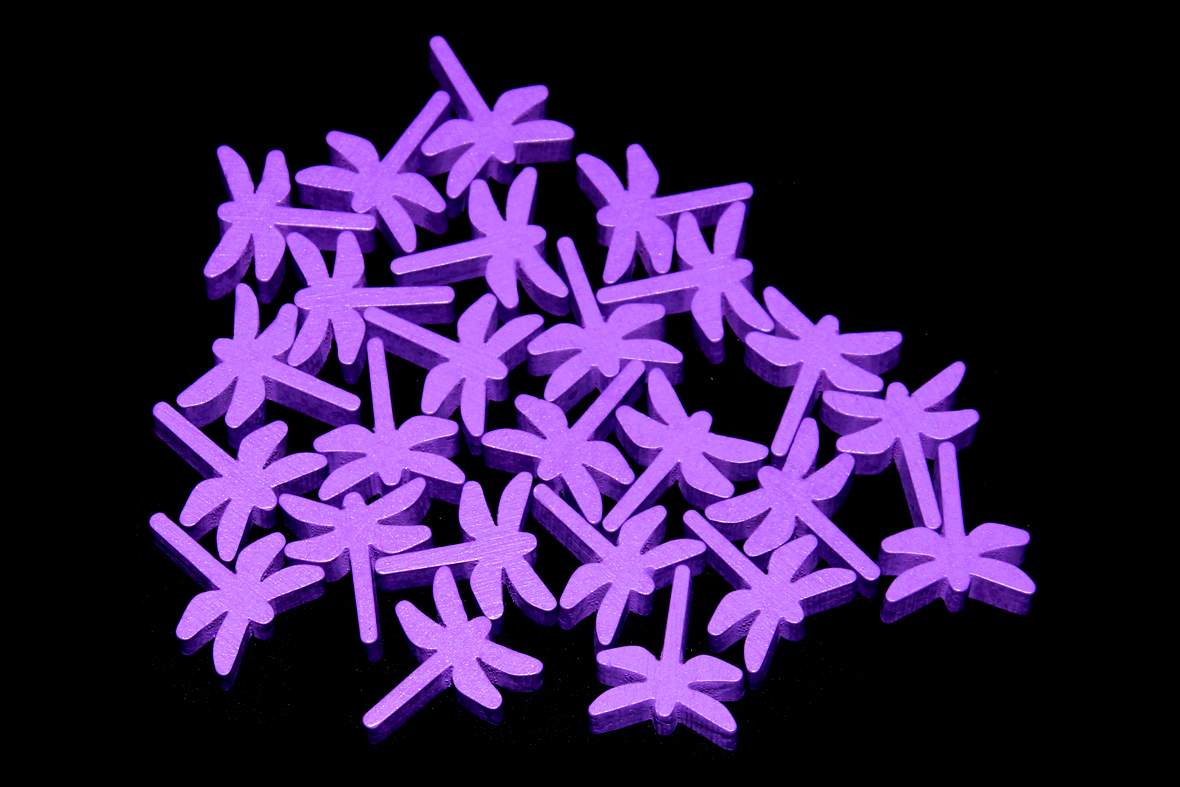 You can set the extra tokens aside, as mentioned, including the frogs, cherry blossoms, and first player / wind tokens:

Give each player a Koi in their color of choice, and then put the other one slightly off the board (where a 0 could be, but, isn’t): 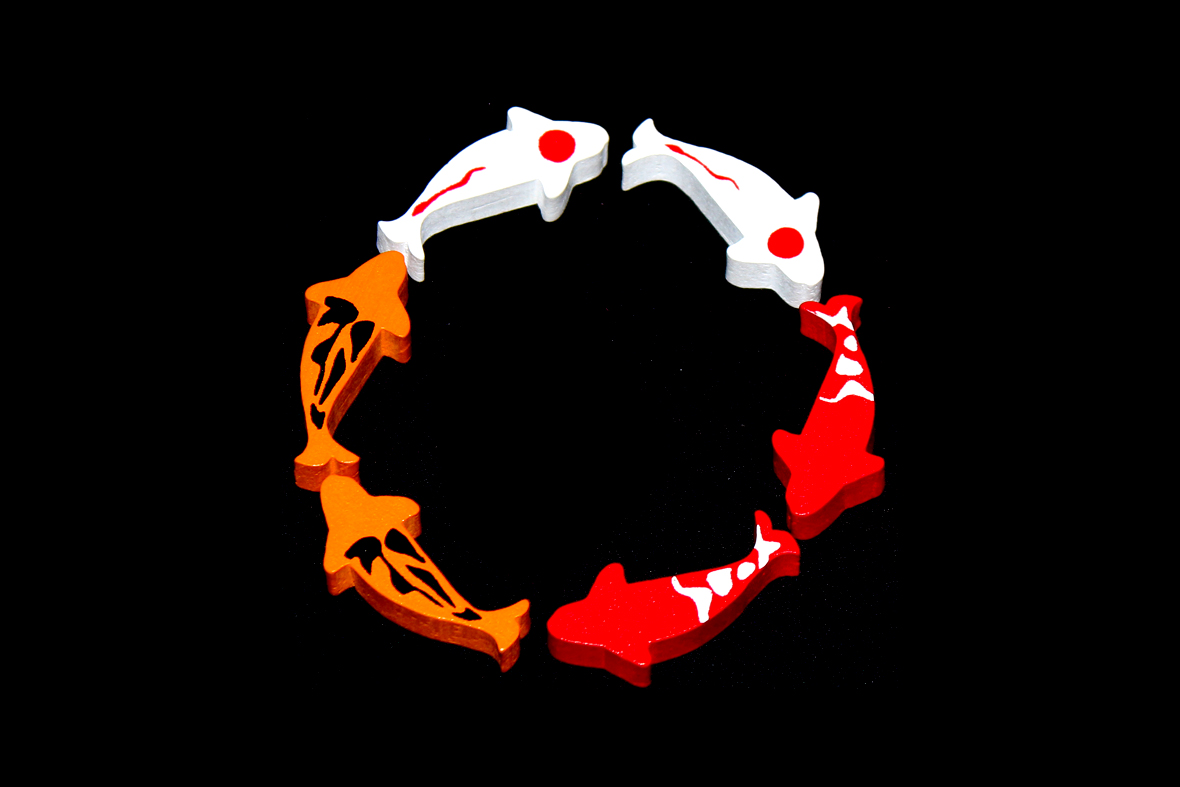 Shuffle the KOI cards; give the first two players 4 each, 5 to the third player, and 6th to the fourth player:

That should be it! You’re good to go:

A game of KOI is played over several rounds, as you live out your life’s dream of being a fish and eating bugs and the occasional frog as you navigate the weather. I’m not judging your dreams; I’m just telling you that’s what they are. As you do so, you accrue points, which are good, because the player with the most points wins! Let’s go through a round. If it’s your first round, skip to where I say Fourth. 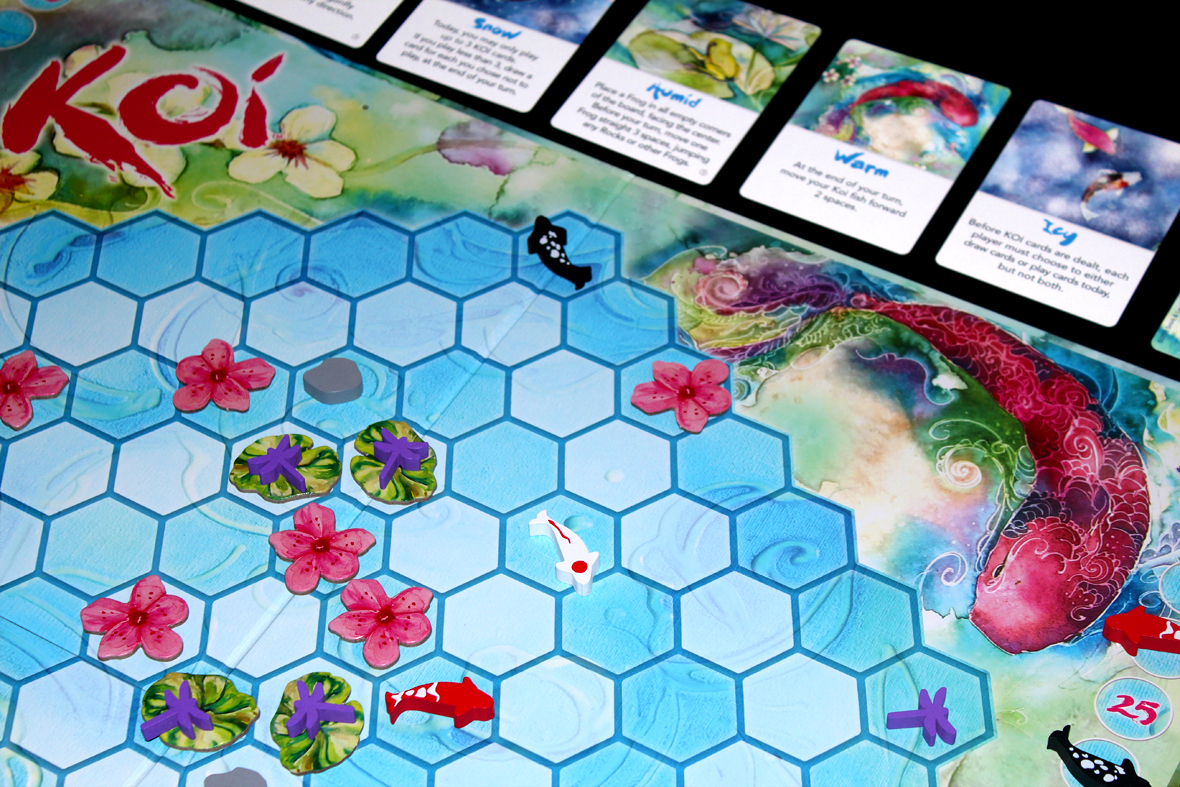 First, reveal a new Weather Card. That card will cause a persistent effect for the round. When you reveal a new one, discard the previous one; you can only have one weather at a time; this isn’t Colorado.

Second, place a Dragonfly on every empty Lily Pad. If there’s a frog adjacent to that Lily Pad, it immediately chows down on that poor Dragonfly, so you don’t need to place one on that Lily Pad. I guess that’s nice for the frog, though?

Third! Unless the Weather Card tells you otherwise (and annoyingly, sometimes it does), deal each player three KOI cards.

Fourth: Everyone gets to take their actions! Starting with the first player, they can do any of the following actions as much as they want and in any order: 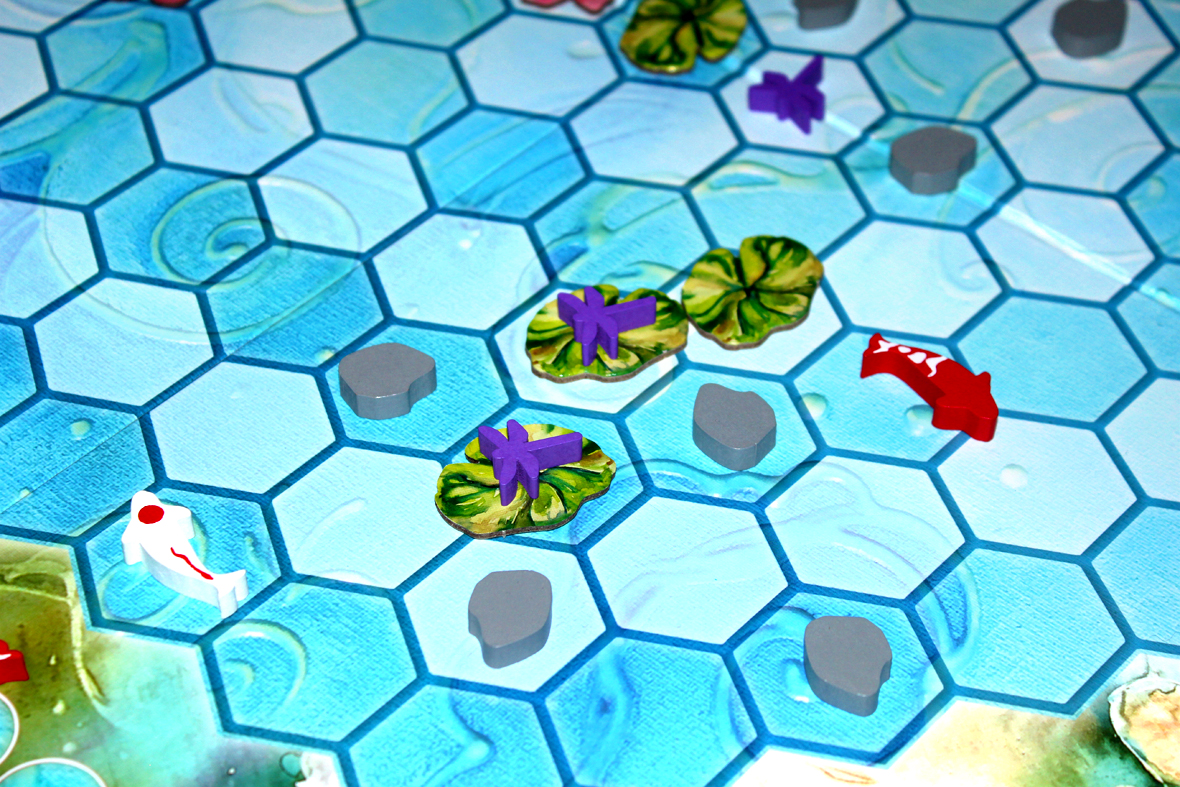 At the end of your turn, discard down to 5 cards.

Fifth, check for a Flood. That’s if there are no Dragonflies left on the board. When that happens, all the Cherry Blossoms and Frogs on the board are removed and Koi are pushed to any spot on the closest edge of the hex board. Basically it’s a board reset that doesn’t affect rocks or lily pads. Then spawn new Dragonflies on the lily pads.

Once every player has taken their turn, the Day ends. Have each player add the tokens they’ve claimed to their score. Then, pass the First Player Token to the player with the lowest score.

After 7 Days, the player with the most points wins!

Not too many, though the two-player game isn’t personally my most interesting game, in my opinion. It’s a bit too easy to stay very far away from each other and just throw rocks as is convenient, which … isn’t particularly exciting. Beyond that, there’s a bit more contention for Dragonflies, but there are also more of them, so it scales decently. The only thing slightly annoying about higher player counts is that it’s not “the player in first place goes last”, it’s “the player in last place goes first”, which might mean that the player in first place goes second, which is awesome for them. That can make the game feel a bit tilted towards that player, but there’s not much to be done about it. Oh well. I don’t have a strong recommendation for this game at any player count, so, pick your favorite and knock yourself out.

Overall, yeah, I don’t really enjoy KOI much at all. It’s definitely pretty, which softens my distaste for it, but I think I’d rather have a shadowbox of it than actually play it as a game. Part of it, for me, is that it feels pretty random, since most players don’t have extra cards between turns (at least, this was the case in most of the games I played) and so are kind of reliant on whatever cards they end up drawing each round (especially given some of the weather configurations). The other thing is that the game feels a bit clunky. It’s things like the cards resolving from bottom to top or having to track the way your curved fish token is facing as a major facet of gameplay that kind of take me out of the moment. If I can distinctly remember thinking, “man, this is frustrating” during the game, then it’s probably not going to be an experience I come away from with a positive outlook. That said, it does have some really positive things going for it. Like I said, it’s a very pretty game; the art direction is solid, the pieces are nice, and the whole thing has a nice thematic consistency to it. The Weather cards, while occasionally frustrating, are a nice thematic addition to the game and they’re well-implemented within the game’s scope. Additionally, the game gives all players a sense of progression as they collectively build up their pond, and it’s always nice to see how the game looks at its conclusion. But that’s about where I stand on it; it’s nice to look at, but it’s not the right fit for me. If you like action programming a lot and don’t mind random card draws, though, it might be for you? I get the feeling that I would probably enjoy the solo mode of this a bit more, as well.