I think this is the last of the Oink Games that I can feasibly review for a while, to be honest. VOID is … a challenge, since it’s more of an abstract concept than a game, in particular. A playable, abstract concept. It’s a thing. Anyways, let’s talk about the game we have now. Eventually I’ll make sure to pick up Trick of the Phantom, as well. Probably Gen Con?

In Moneybags, the heist has already been a huge success! So that’s a relief. The Boss has taken the money and must distribute it to their underlings “fairly”. That said, there’s no honor among thieves, so the crew is going to steal from each other, of course. If you feel like your bag is a bit lighter than it used to be, you can always take that up with one of your crewmates… Will you be able to make it out of the hideout with the most money? Or will you just end up broke?

Not much to say. Give one player the Boss token:

Give each player a bag: 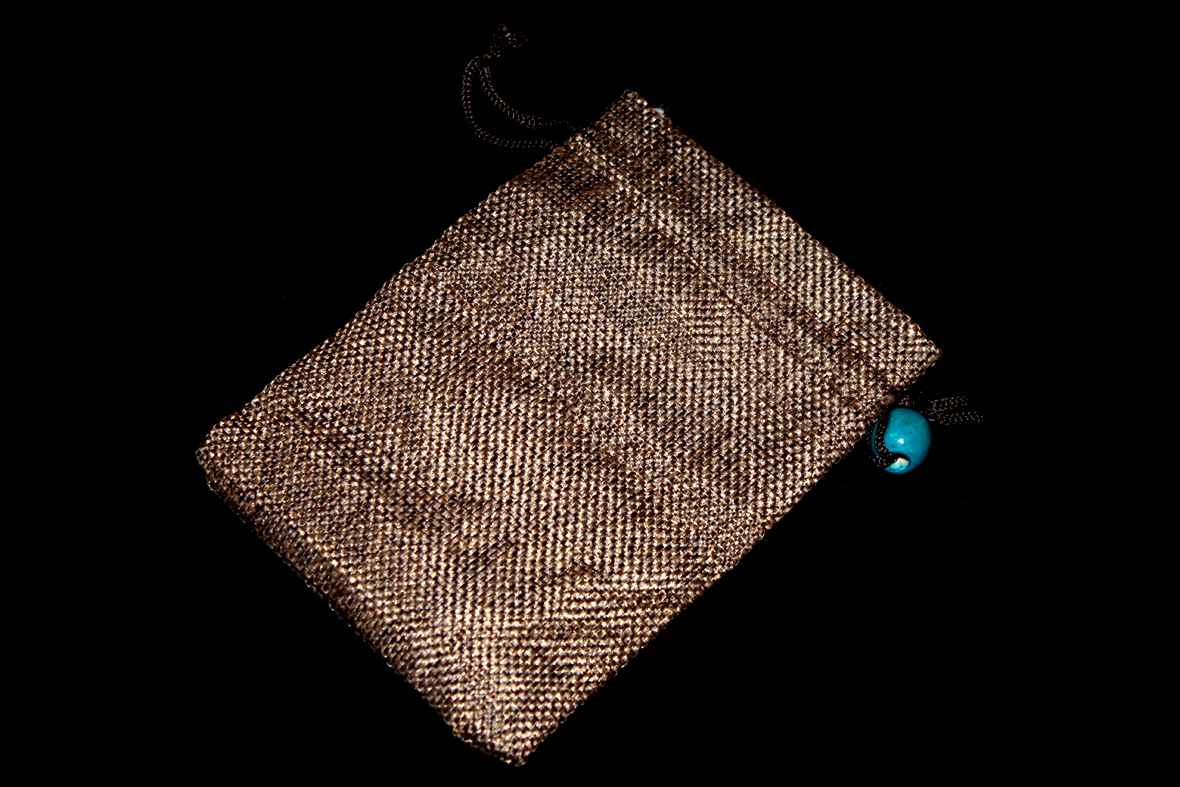 Put all the money in the box:

You can add the diamond to it as well. Set aside the round scoring tokens:

You’re all good to start, now! 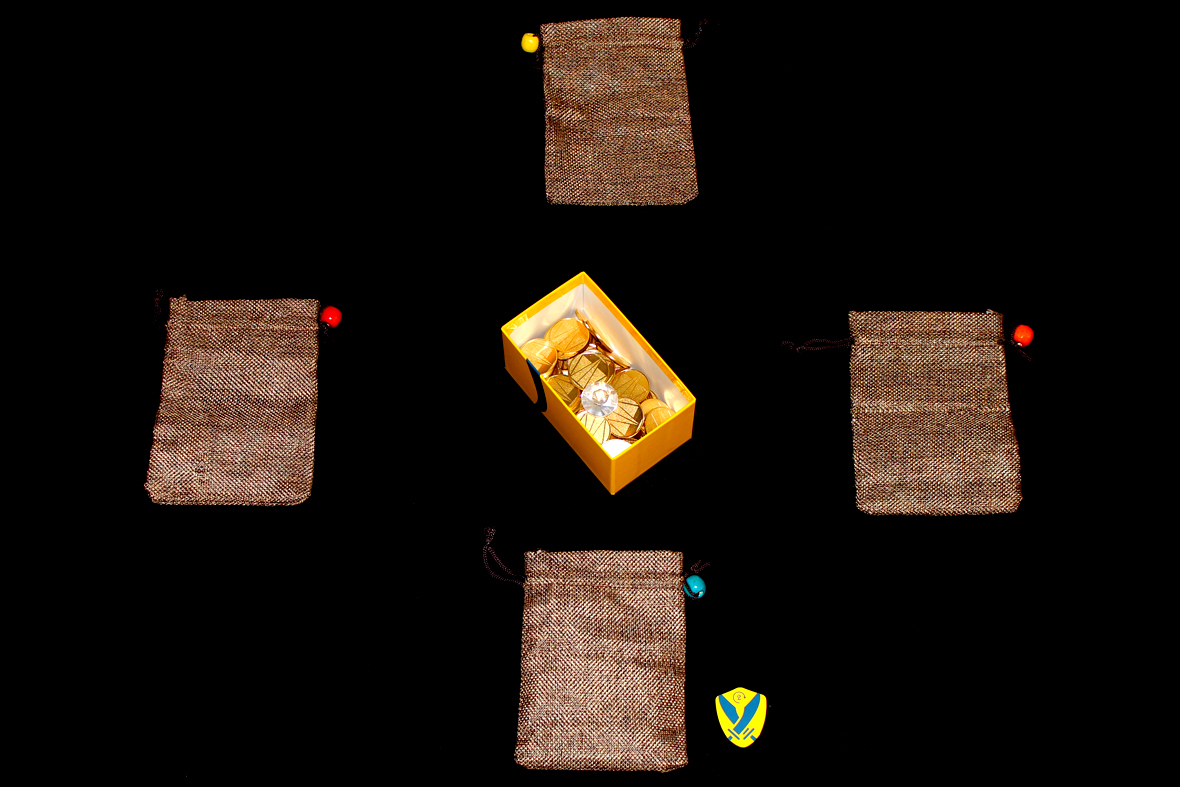 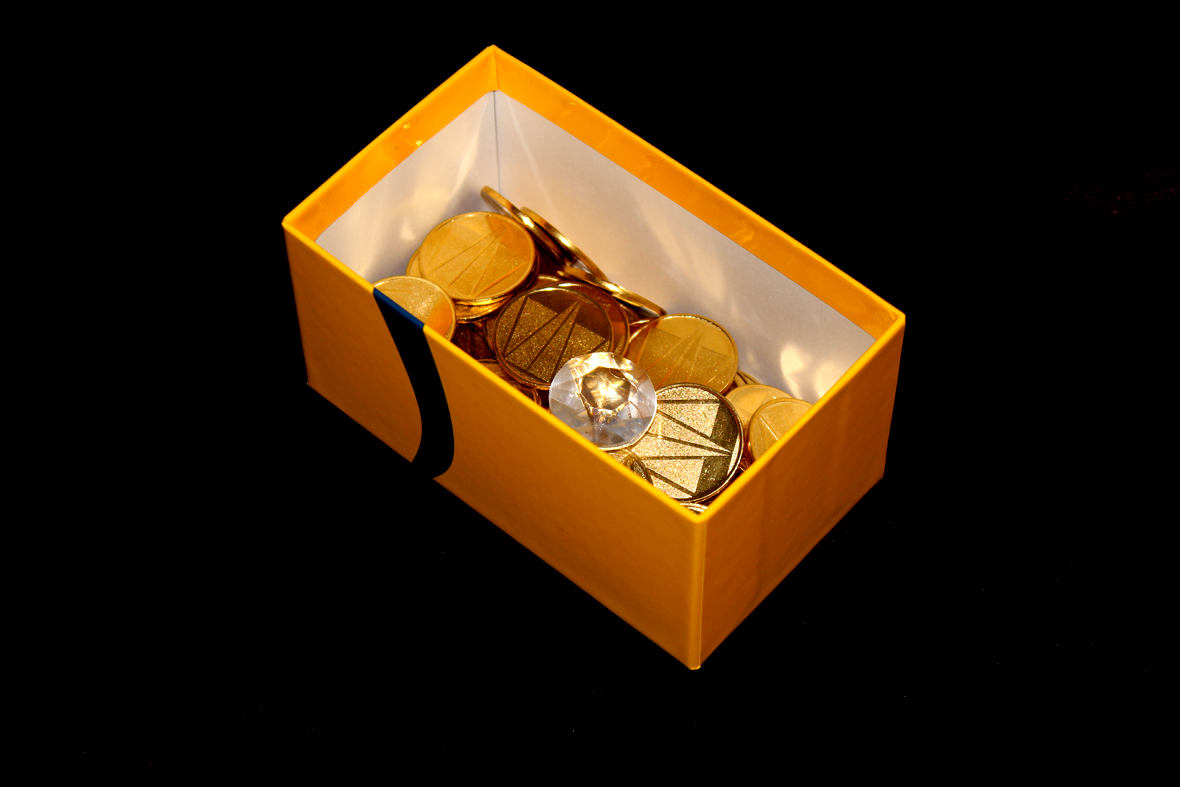 So, over a round, you’ll play two turns. Your goal is to get away with the most money. Be careful, though! If someone thinks you’ve conned them, they can challenge you, and these thieves have their own way of dealing with betrayal… It’s unpleasant. Your goal is to get the most coins, though, so you’ll have to manage to trick somebody if you want to come out ahead.

The Boss must first distribute the haul (including the diamond) “evenly” to all players. Once that happens, players take turns (starting with the player to the Boss’s left) until the Boss has taken their turn twice.

The most important rule is this: do not hold your own bag from the bottom.

On your turn, you can do one of several actions:

The game continues until: 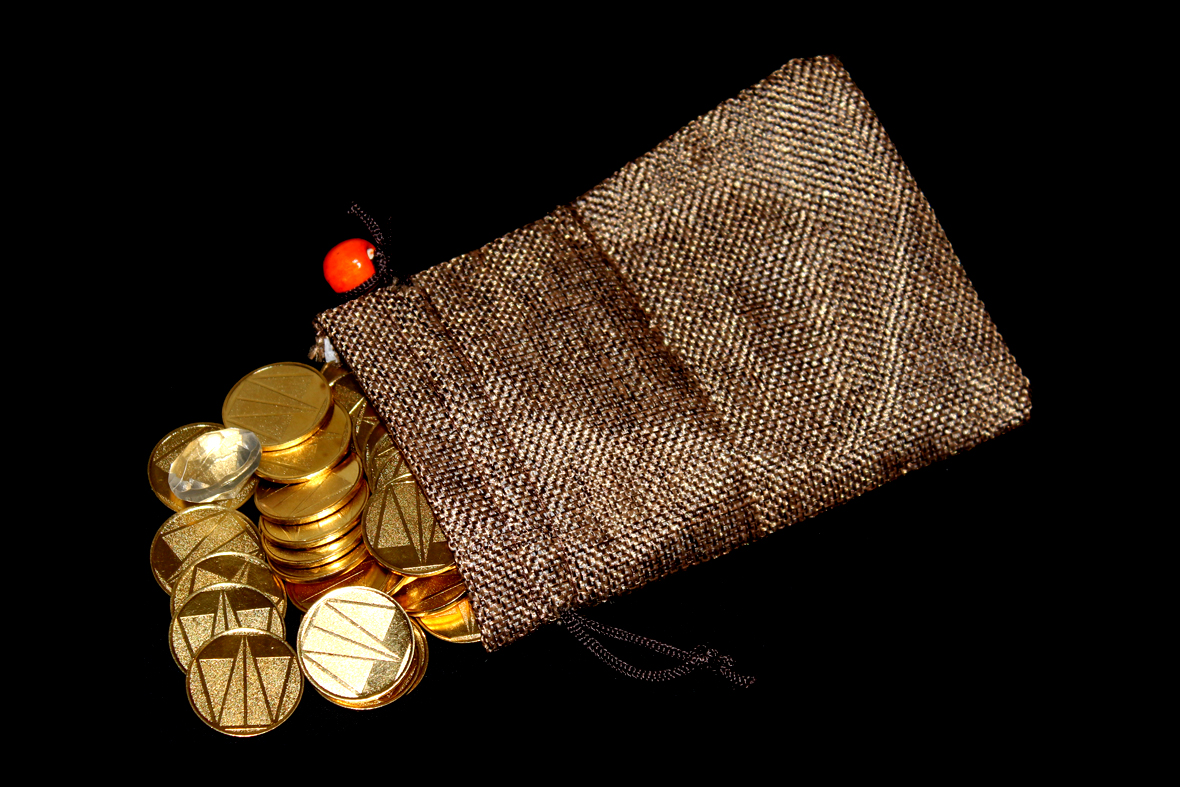 All remaining players take out their money and stack it; the player with the highest stack (again, including the diamond) wins!

Not really that many; there are more people to steal from at higher player counts and more chances the boss messed up the initial distribution, but beyond that it’s still “if you have more than half of the money and you’re somehow sure, close your bag on your turn; otherwise, steal”, generally speaking. I don’t see much of a practical difference between multiple player counts.

Hey, look, it’s happened; there was an Oink Game that I didn’t particularly like. Maybe that’s why it’s so much harder to find than the others, but who knows. Either way, I just don’t think I particularly “get” this one. Half of the time, for me, it’s just watching other people steal from each other and then challenge, meaning that one person ends up with even more money. They subsequently get robbed, challenge, and then one person has even more money. This kind of cycles upwards until it’s either too late to stop the person with all the money or they make a bad call and they lose the game. Either way, it’s not the most exciting experience for me, but that’s okay. It might be more for you if you enjoy the idea of being able to rob other players but never quite know if you took enough or too much. I think it’s a cute concept, but I don’t think execution quite lives up to what it could. I’d love to see a version of this with more structure. It’s not a bad game to play; I just find it kind of forgettable (part of why this review took so long to write). That makes Oink roughly … 15 for 16, in my book, and show me a publisher with numbers like that. Either way, worst case scenario, you get a bunch of sacks and metal coins, which you can use for just about anything, so, that’s still fine.