Full disclosure: A preview copy of Life Siphon was provided by Lay Waste Games. Some art, gameplay, or other aspects of the game may change between this preview and the fulfillment of the Kickstarter, should it fund, as this is a preview of a currently unreleased game. Also, while I don’t charge for Kickstarter previews, the publisher was charged a rush fee due to the tight timeline they needed the review completed in.

Yeah, so, it’s Tuesday. Which is weird! I never post on Tuesdays. Except for now. There was an embargo; it’s gone, now. Yes, I posted four reviews yesterday; they’re all still there. This is a bonus fifth review. What will it contain? Well, no better way to find out than to get right to it. Life Siphon is the latest from Lay Waste Games, publisher of Dragoon, Human Era, Heads Will Roll, and all sorts of “board games are better with metal components” stuff. It’s a good aesthetic.

In Life Siphon, well, you kind of let dragons destroy your world in Dragoon, and you were driven underground. You managed to find a mysterious box and your friends opened it with you (or pressured you to open it; what great friends). So, good news and bad news. The good news is that you now have unspeakable power. The bad news is that you can’t move. The worse news is that you can only escape if you use your power (at the cost of your own life force) to kill your now-opponents. Should teach you a lesson about opening strange cursed boxes, right?

Not a ton. Put out the board:

Set the familiars nearby. There are three types. Imps: 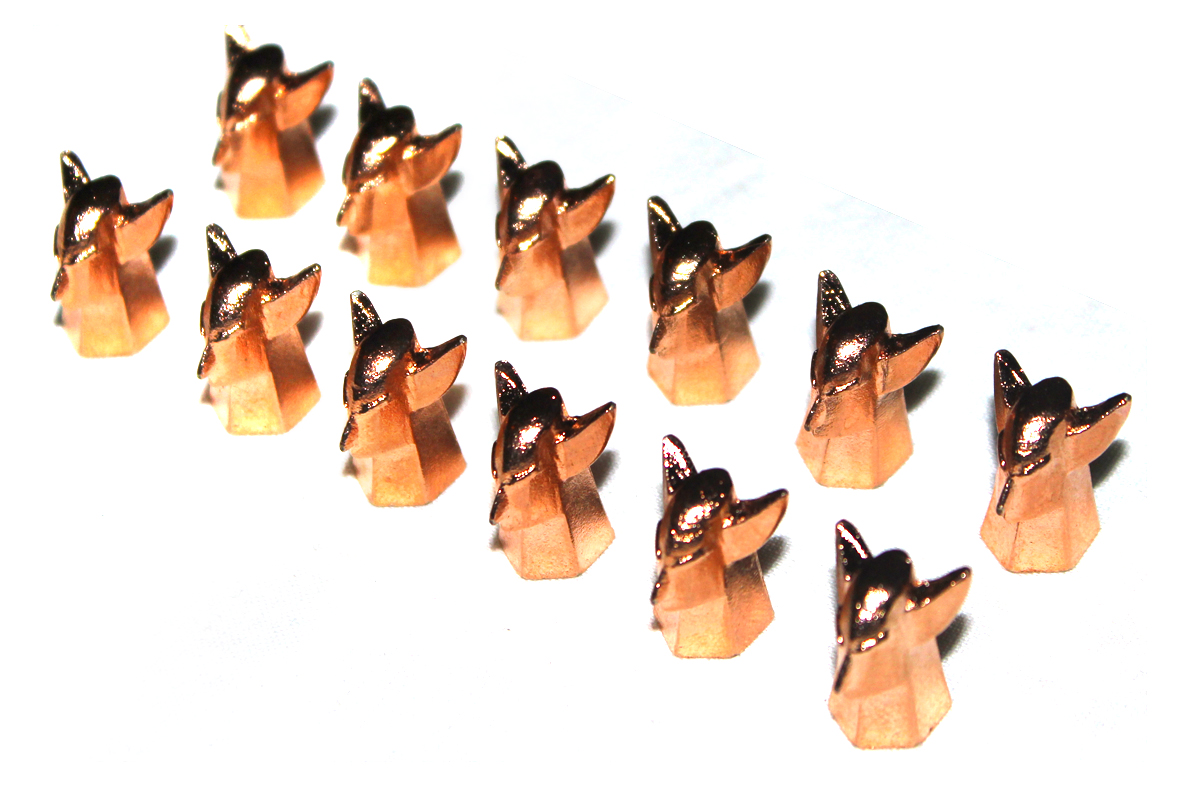 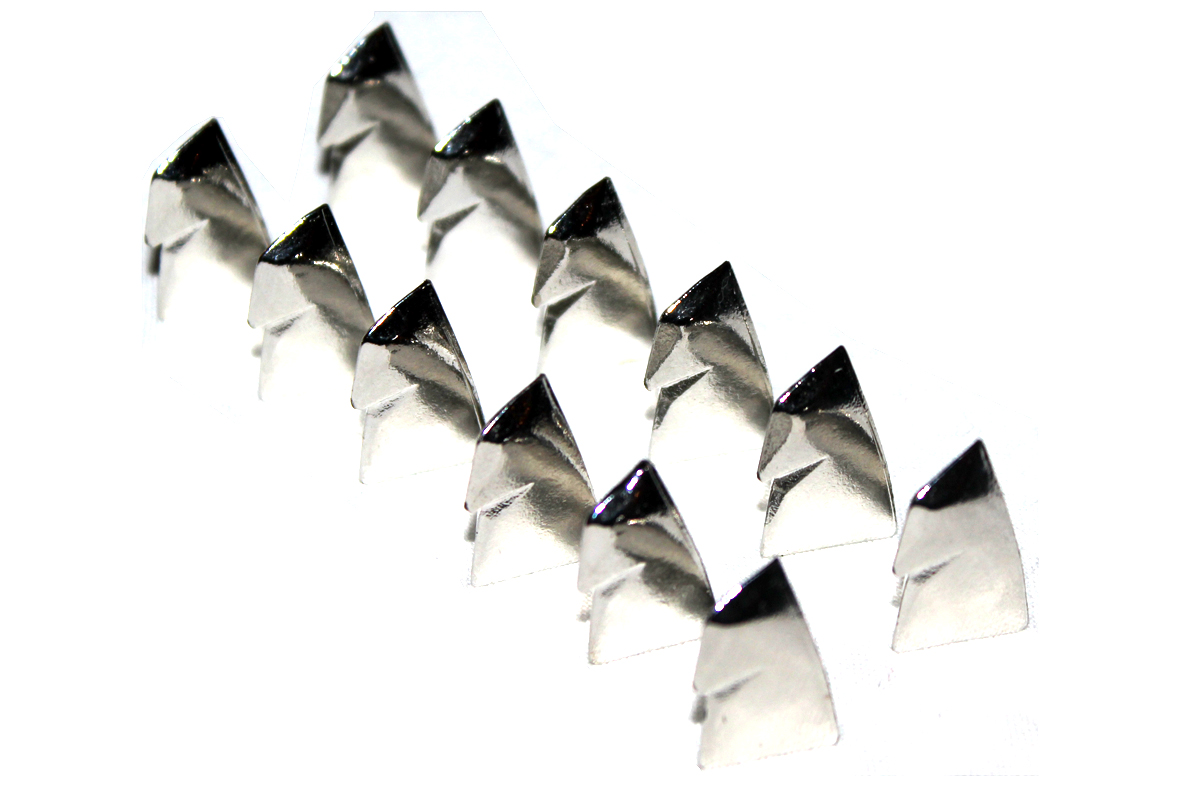 They’re all metal; it’s rad (though hard to photograph). Set out the Aspects, as well:

More on those later, but they’re abilities that you can take during the game. Have each player put a skull on 20, their starting life: 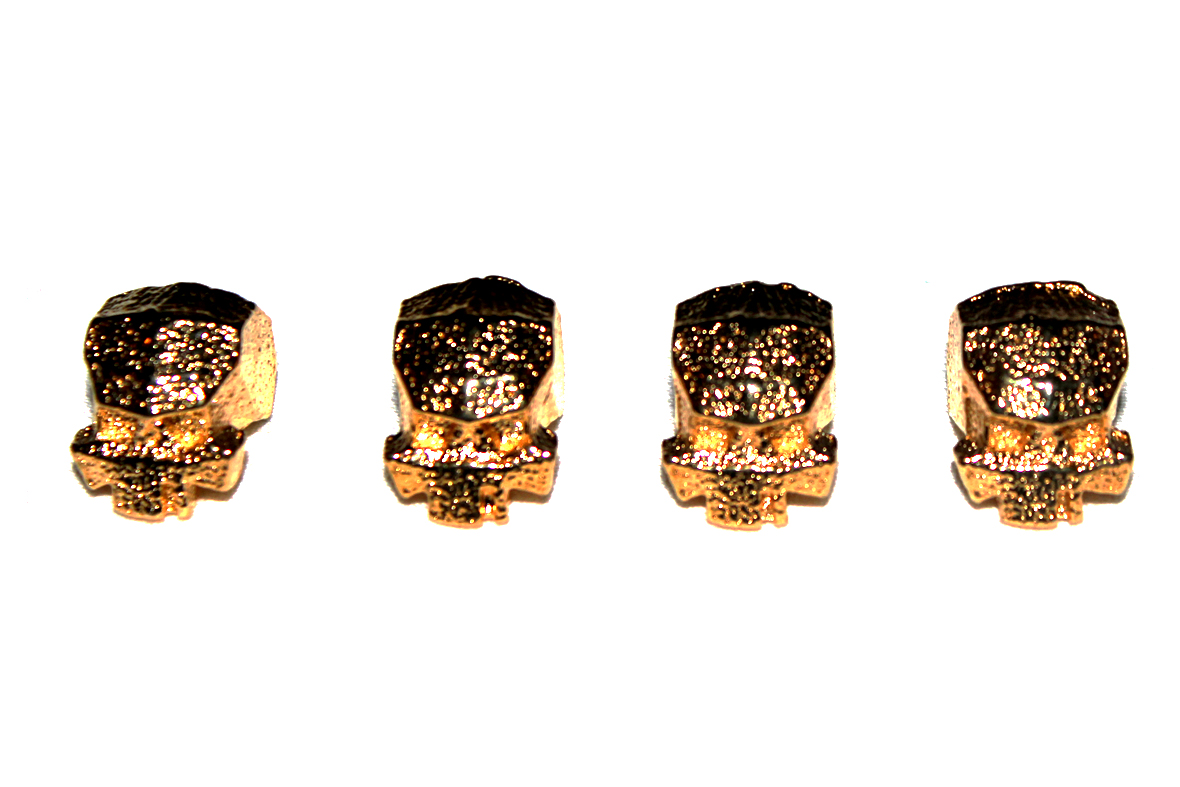 If you think those are familiar, you’d be incorrect; the other things are familiars. Heh. Anyways, once you’ve done that, give each player one card: 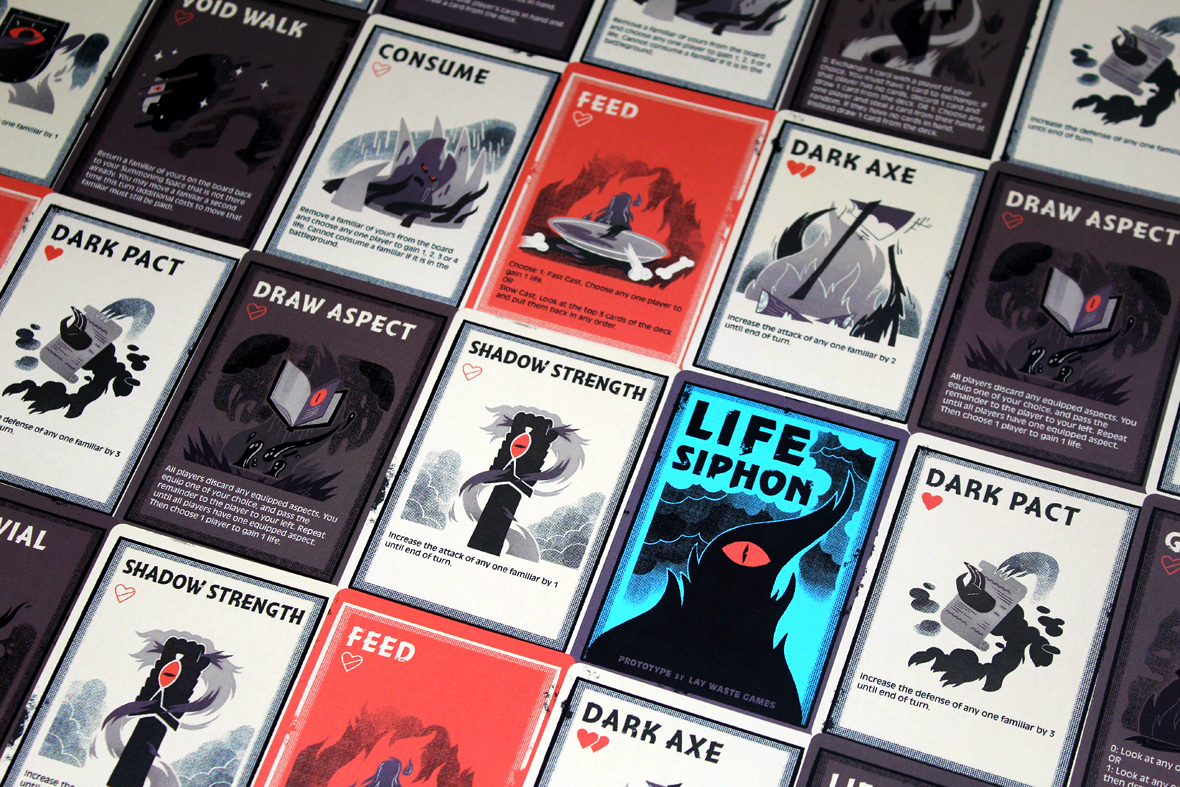 Flip three face-up next to the deck; these will be the River Cards. You should be ready to start! Choose a starting player.

So a game of Life Siphon is played until someone dies. A character in the game, of course, but someone. When that happens, the player who killed them wins! Until then, you have to balance two competing forces: the player on your right wants to kill you, and the player on your left has to die for you to escape. It’s a tough call, but, after much deliberation you’re going to go with the player on the left. But how will you bring about their demise?

Well, on your turn, you’ve got a few phases. I’ll go through each in turn.

During the Regenerate Phase, you may gain Life (up to your maximum of 20). You always gain one Life, and then you gain Life equal to the number of Familiars you have in the River Row of your board’s quadrant (the one before the Battleground). If you have no Familiars in the Battleground (the area closest to the center), you may also draw one of the River cards. 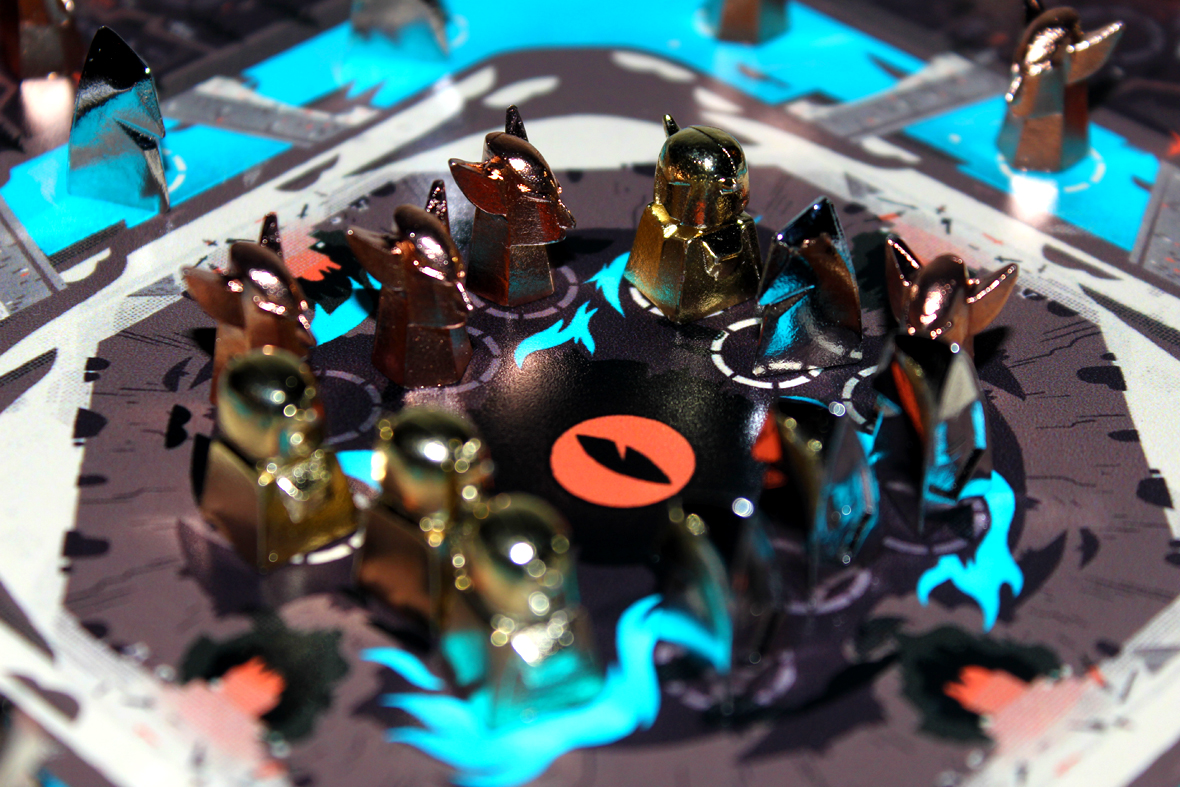 During the Attack Phase, you may attack with each of your Familiars, one at a time. You are not obligated to attack; you only have to fight if you want to.

If you choose to attack, your opponent may block or not, depending on some rules: 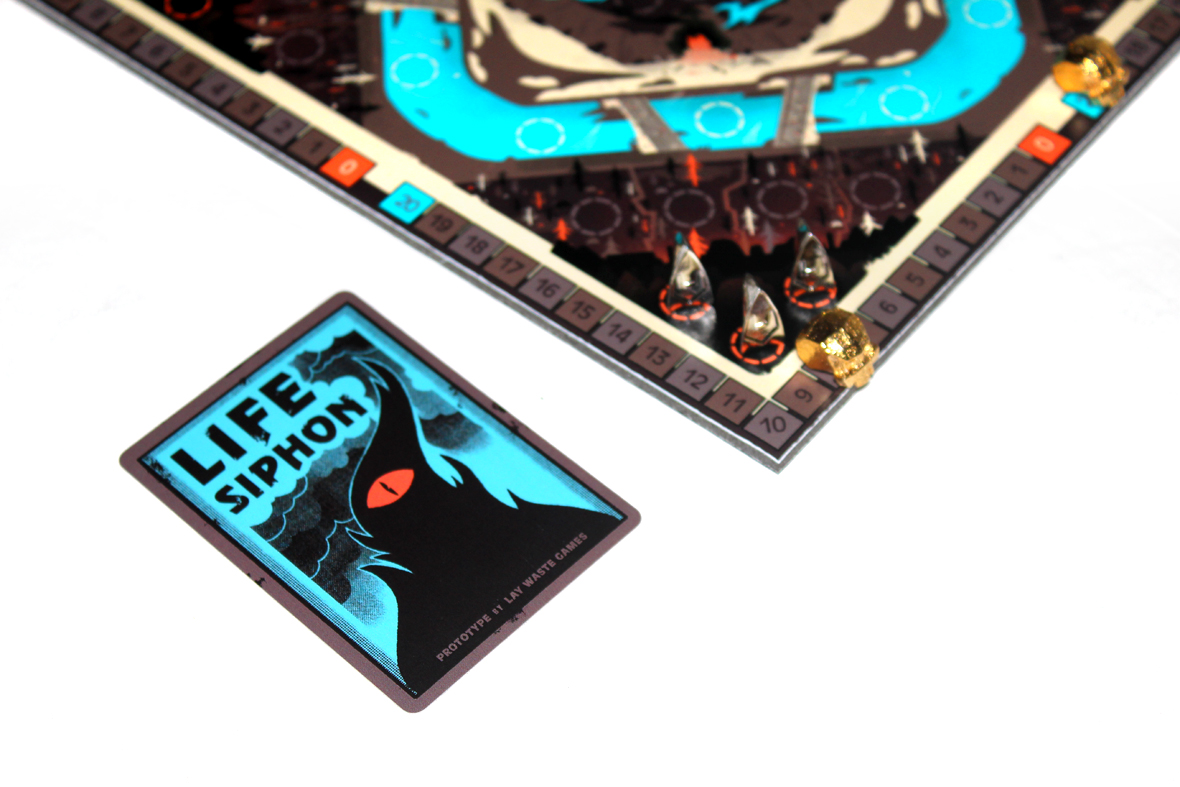 During the Main Phase, you can do all kinds of things. Summon Familiars, Move Familiars, and Cast your Slow Spells (the darker cards).

You may Summon Familiars on your turn to bolster your ranks and eventually attack your opponent. There’s a limit, though; you may only summon 3 per turn, and there must be room in the Summoning Area (the zone closest to the corner) to place one when you summon it. There are three types of Familiars:

You can move a Familiar once per turn from any zone to the next zone closer to the center. The space they’re on doesn’t determine what space they move to; it’s just designed to limit how many can be in that zone at once.

So Fast Cast spells can be played whenever, but slow cast spells need to be played during your Main Phase. Once such spell, Draw Aspect, introduces the Aspects, which are abilites that you can possess during the game. When you play it, draft the Aspects (starting with you). Some have passive abilities; some have active ones. An active ability (one with a Slow Cast) can only be used once per turn, even if you were to play Draw Aspect again.

Once you’ve done all that, draw a card from the deck to end your turn. Play continues with the player on your left.

Play continues until any one player has reduced their opponent’s health to 0. When that happens, that player wins and all other players lose. They’re free!

The major difference is the balancing act, so it only really sets a difference between 2 players and more than 2 players. At two, the player you’re attacking is also the player attacking you, so there’s no real balancing mechanic. You can kind of rush them and put it all on the line, if you want. Worst case, you die, and then you just pick up and play again. It’s not a difficult game to reset.

At higher player counts the balancing act is much, much more pronounced. You need to keep an eye on when another player might die because if they die, you lose! It’s not that the next player now needs to take you out; they just win. So you’ll see a lot more random defensive moves being made. At three I don’t mind it that much, but at four I worry that you need to both figure out which player will intervene and when so that both players don’t overcompensate or something, but that requires coordination, which also isn’t great. It’s not clear how best to make that work, but I know some players will love that sort of back-and-forth, so who am I to stop them?

My personal preference on player count is 3 players, but I would more generally just say I didn’t particularly enjoy it at two.

Overall, Life Siphon is interesting! I think, being honest, it’s a bit too combat-focused for me. That’s pretty common, though; I’m not a huge fan of combat in games in general, and this is pretty heavily tilted towards it. What I do like about the game is everything about the theme and presentation. I love silly magic stuff in games, and this manages to filter it through a nice (and dark) lens that’s interesting, novel, and kind of sad (I mean, dragons took over the whole world). My complaint about the spell system is the same complaint I bring up for any games with a “reaction”-style mechanic; I think it’s still kind of ill-defined and I hope that it’s cleaned up a bit before the final release. What I will say, is, having played Dragoon, I think this is an improvement, personally (at least at higher player counts). It trades the dice luck for more card luck, which may not appeal to everyone, sure, but it is nice in that it lets players choose between the two as to what appeals to them most. Similar to the Dragoon series, it seems like expansions are highly likely in the future (more Familiars and Aspects, mostly), and I’m certainly interested in those. Lay Waste tends to be innovative, and I respect that, even if the combat heavy games aren’t my absolute favorites of theirs. If you’re into that sort of thing, though, and you’re ready to bring the fight to your cursed friends to try and escape your dark fate, you might get a kick out of Life Siphon!